When egalitarianism rests on two wheels.

With scores of urban advocacy blogs out there, I find it hard to imagine that I have much to add to the conversation on the defining characteristics of Mackinac Island, Michigan.  Even if the northerly island in Lake Huron—a former Jesuit mission, Ojibwa sacred site, and strategic military encampment—elicits little more than a head-scratching among people from the coasts, nearly everyone in the Midwest is at least familiar with the name.  And in the summer, the isle draws tens of thousands of visitors daily from downstate and elsewhere in the Great Lakes region.  Even those who consider the Great Lakes a pale substitute for a genuine sand beach would probably concede that the town itself is fairly picturesque. 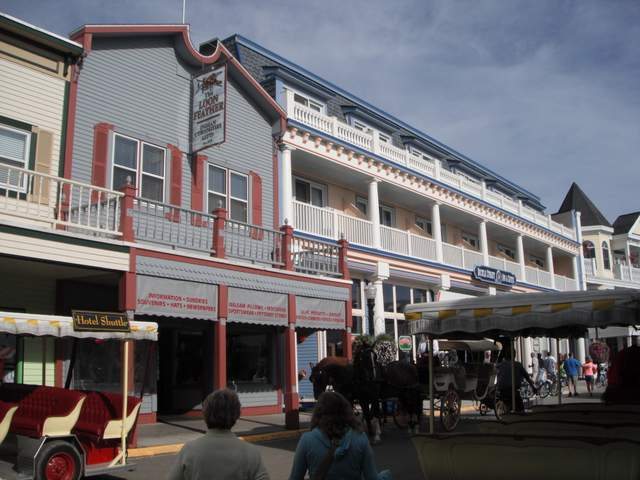 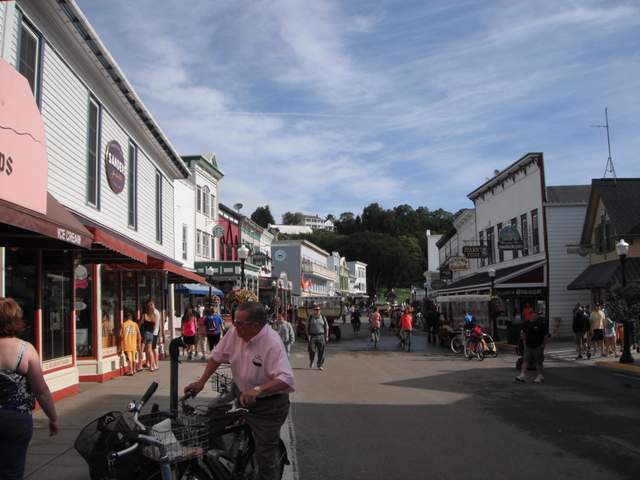 While most visitors to the Island will first encounter the dense cluster of buildings along Main Street, the overwhelming majority of the 3.8 square mile island is unsettled.  Not only is the entire island a State Park, but the National Park Service also classifies it as a Historic Landmark. The impeccable condition of the buildings should therefore come as no surprise.  What distinguishes it from most other historic districts, however, is that it shows little to no evidence that the historic preservation movement that emerged in the mid 20thcentury spawned a revival of Mackinac.  It’s difficult if not impossible to spot any telltale indications that the town was ever down-and-out: few, if any, architectural embellishments fail to conform to the rest of the structure; not a single building (some of which are over two centuries old) is in even slightest disrepair; no parking lots where a building once stood.  It looks like the town never went out of style.  And, to be frank, Mackinac probably never did suffer.  It earned popularity with tourists after the Civil War, then quickly expanded to serve as the premier summer destination for wealthy downstate industrialists during the Victorian era, the time period influencing the preponderance of the town’s architecture. 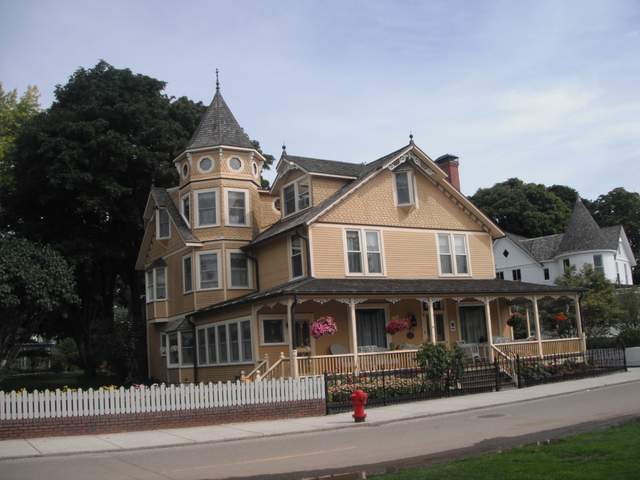 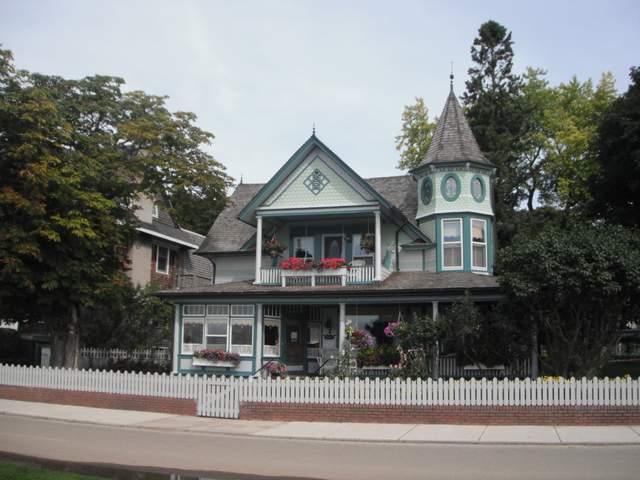 Generalizing though it may be, the nation’s pioneer spirit has always valued novelty—whether through our persistently decentralizing metropolitan areas, or for our storied history of domestic vacation destinations that peak suddenly then decline to a permanent malaise (Atlantic City, Monticello NY, Salton Sea).  Or, conversely, those vacation destinations that have demonstrated sea legs for remaining viable over many decades—Las Vegas, Disneyland—primarily because they have reinvented themselves every few years through the demolition and construction of new attractions.  Mackinac Island has done none of this, yet has continued to age gracefully.  It’s an outlier.

Of the three aforementioned preservation indicators listed above, however, one should stand out in particular: the absence of parking lots in the space of buildings.  Mackinac has no parking lots because it doesn’t need them.  It has no cars.  The island’s government passed a law forbidding motorized vehicles as long ago as 1898, a time well before the motorized vehicle had become commonplace.  The law’s original aim was promote clean, noise-free air and to avoid startling the town’s horses; subsequent leadership has maintained the law ever since, with few exceptions for snowmobiles, shipment trucks, and emergency vehicles.  But no residents or entrepreneurs on the island can own a car.

The absence of cars on Mackinac translates to a modified system of rules for human settlement, which manifests itself in the look of the town. 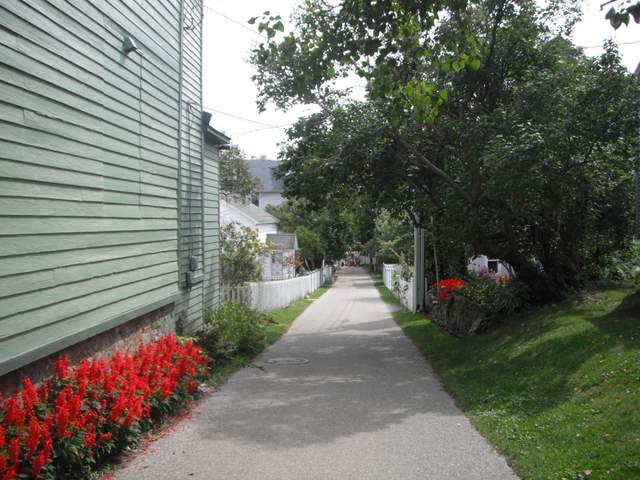 Not surprisingly, roads don’t need to be particularly wide to accommodate on-street parking, and parking lots are unheard of.  The town itself doesn’t look particularly unconventional in terms of the positioning of structures—instead, it looks almost hyperconventional, an unsullied facsimile of Main Street Americana. 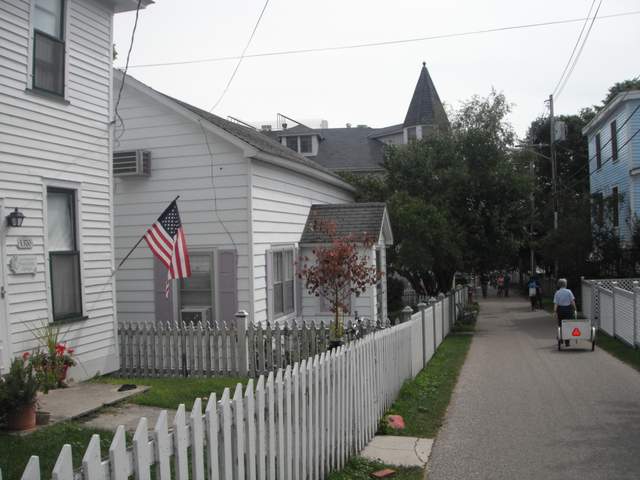 Even outside of the most urbanized parts of the island, a dense network of paths crisscrosses through the woods and the hills, almost exclusively intended for horses and bicyclists. 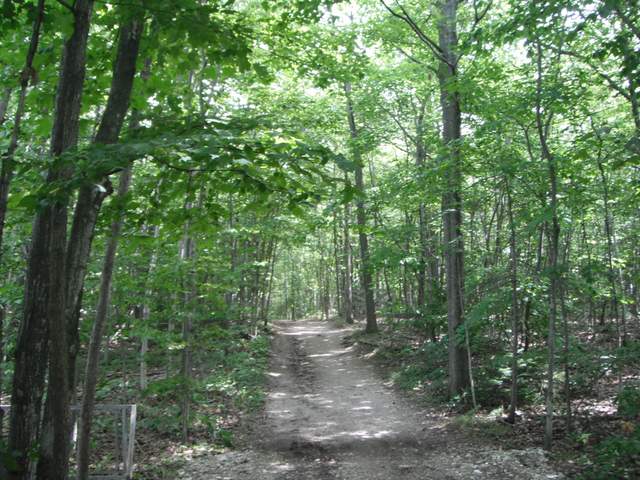 And the perimeter of the island features a complete multi-use path, which many of the beachfront homes depend upon for access. 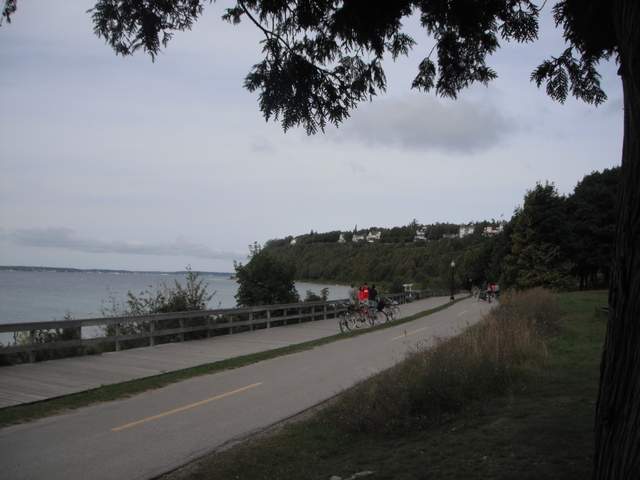 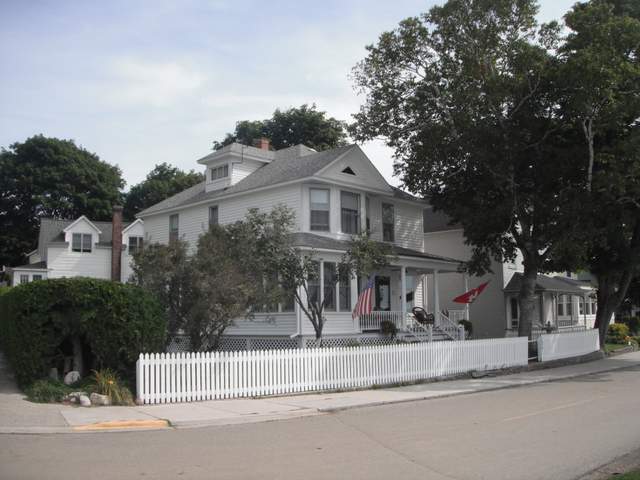 And, of course, the inordinate cluster of bikes parked together. 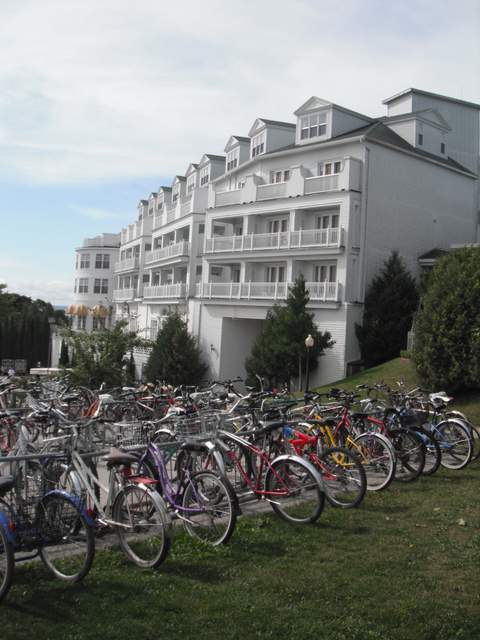 One might easily confuse such a vista for Copenhagen or Amsterdam, but in this case the bikes are almost uniformly in good condition—no need to grime them up to deter thieves.  And the proof is the fact that virtually none of them are locked or secured.

If it all seems impossibly idyllic, it’s likely that you formed the same conclusions that I had, at least until I set foot on the island.  I’ll concede that I was expecting a bohemian enclave, with provocative murals on the sides of buildings, purveyors of hemp products, unwashed street musicians, and vegan pastry shops.  And if that guess was way off base (and it was), at the very least I was anticipating something a little bourgeois-bohemian—a resort town for affluent urbanites, filled with expensive pet salons, micro-brewpubs, Asian tapas, or wine bars.  Strike two.  Maybe these were bad assumptions on my part, to think such a settlement would thrive in such a remote village.  But such communities do exist: Vermont is filled with hippie hamlets like my first description, and Michigan can claim more than its share of ritzy waterfront towns that attract weekenders from Chicago and Detroit (Petoskey, MI is the first that comes to mind).

But Mackinac Island is neither of these. 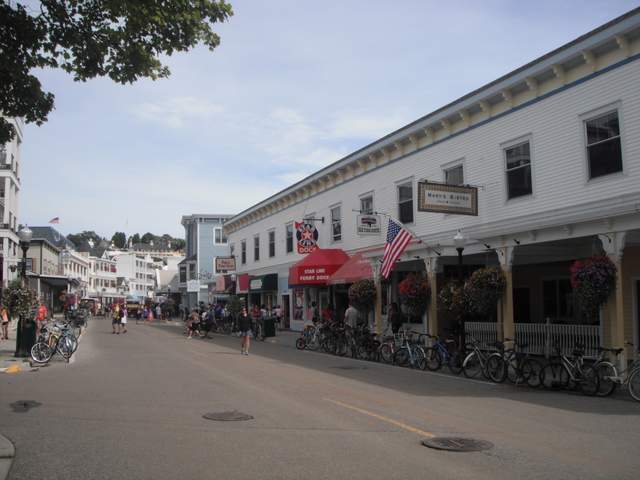 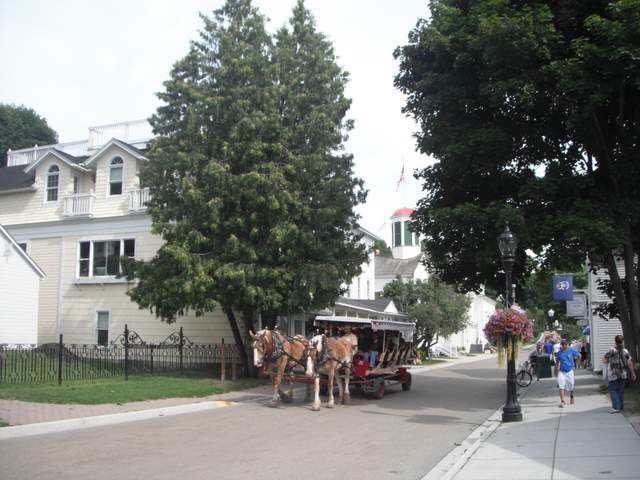 The most famous comestible for sale along Main Street is fudge, offered from a variety of vendors.  Other shops display different flavors of hot pretzels, Native American-inspired crafts, family dining, soda fountains.  And so forth.  Superficial as it may seem for me to define the character of a community through its retail, it is a judgment call we all make in our assessments of unfamiliar urbanized places.  And what it indicates is that Mackinac Island is, for the most part, a slice of Middle America.  Nary a whiff of counterculture.  I guess it got the bourgeois part right.

Was I naïve in expecting Mackinac to appeal to society’s fringe?  Probably.  But since the island’s most enduring claim to fame is its century-old ban on automobiles—in the state that serves as the cradle of the automotive industry, no less!—it’s understandable to expect the community to push its anti-establishmentarianism to greater extremes.  But, as far as I can tell, it really doesn’t.  Instead, we get chubby Midwesterners on bicycles. 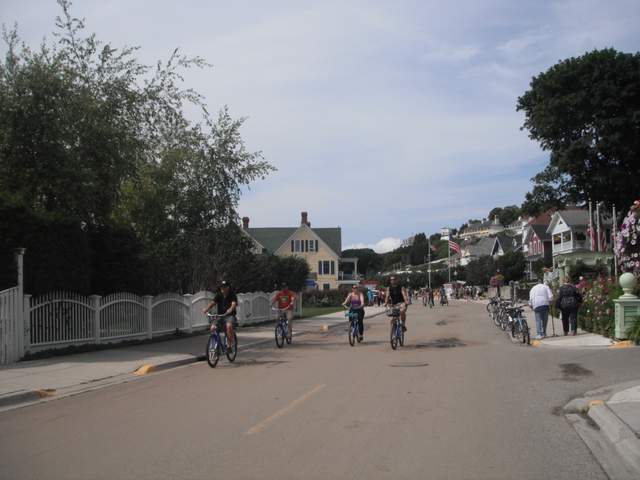 In many ways, this is a greater marvel than if Mackinac were filled with hippies, or hipsters, or Luddite militias.  The fact remains that banning cars is unorthodox just about anywhere in the world, and such a gesture could have easily scared away the peak of society’s bell curve.  After all, most people crave convenience on their vacations, and yet here is a community that outlaws one of the most quintessential American creature comforts.  And middle class families flock here anyway.  And while some opt for the horse-drawn shuttles to view the town, many more rent bikes. 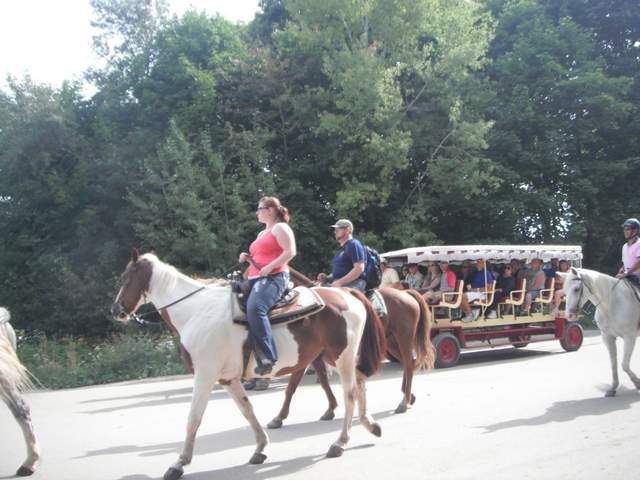 I’m probably being a bit unfair to Middle America in my astonishment—and more than a little patronizing.  But, in many regards, Mackinac is wonderful because it’s so normal. It aggregates a population that, though not necessarily averse to bike-riding, is certainly unlikely treat it as a utilitarian means of getting around—and these vacationers are even less likely to take a hardline stance toward bicycle advocacy, the way the fringe groups do.  They’re recreational bicyclists back home (if they use bikes at all), but on Mackinac, getting around by bike is both utilitarian and recreational.  No militancy to be found.  Yet Mackinac is militant about its ban on motorized vehicles.  The accomplishment of Mackinac Island vaguely resembles the achievement of the Indianapolis Cultural Trail—a shared use path through the Circle City’s downtown, less interesting for attracting hipsters (we knew they’d use it) than it is for luring Mom and Dad and the kids from the suburbs.  It effectively democratized bicycle riding by making it much less intimidating.  I suppose Indy’s achievement is greater than Mackinac’s, since it’s easy not to be afraid of biking the streets of a small town when the streets have no cars.  (Indy obviously still has more than its share of vehicles on the roads.)  But the implementation of this Mackinac law and its unlikely pairing with mainstream culture still makes the island more of a peculiarity.

Mackinac’s ability to perpetuate this ban ad infinitum may depend on a few other embedded advantages the town has over other enclaves.  First of all, the community is really only bustling five months of the year at most; otherwise, population plunges to below 500 people.  Bike-dependency is unlikely to demonstrate such widespread appeal during northern Michigan’s long and unforgiving winters.  Secondly, its island status means it discriminates who wants to arrive there, as well as who can arrive.  Passers-by just don’t stumble onto the community.  By paying for a ferry, visitors have already largely bought into the way of life while they’re there.  And the geography fosters a sense of comfort impossible to replicate if it were part of the mainland.  Even if crime does occur, it’s clear from the absence of bike locks that no one perceives it to be a problem. It’s hard to steal bikes too far on a 4 square mile island in which 99% of the people arrive by ferry.  (Though I guess people could take bikes on the ferry and claim they belong to them?) 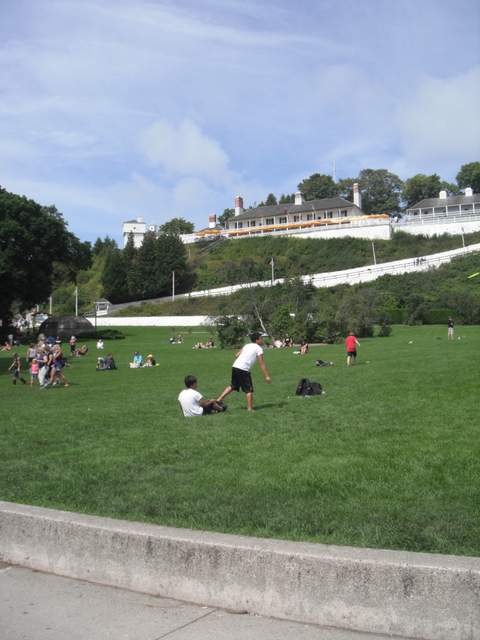 If I were more of a cynic, I could see these two advantages (the isolation and the seasonality) as inextricable with Mackinac’s biggest cultural drawback: people like it precisely because it’s an escapist novelty, meaning that all but the few hundred year-round residents are perfectly happy to return to the comfortable, auto-dependent suburbs of Detroit on Sunday evening.  The characteristics that make Mackinaw distinctive also preclude its replicability anywhere else.  But since I don’t think the abolition of cars makes for pragmatic policy in most of the country (at least not in jurisdictions much bigger than this town), I resign myself to appreciate the island’s broadly accessible charms on their own terms.  Mackinac is just fine without the car-hating counter-revolutionaries.  At least everybody has a good way to burn the calories from all that fudge.

PrevPlugging the passed-over pocket park with programming.
Testing the mutability of murals.Next

6 thoughts on “When egalitarianism rests on two wheels.”