Testing the mutability of murals.

Urban murals, once a rarity outside of a few pioneering cities such as Philadelphia, have emerged in the last decade or so as a sine qua non for any big-city civic art initiative.  Philadelphia might still be the national (or even global) leader through its Mural Arts Program, but many other cities are trying to give Philly a run for its money.  In recognition of having won the bid for Super Bowl XLVI back in 2012, the City of Indianapolis commissioned a variety of local artists to festoon the sides of various buildings with 46 different murals, significantly boosting its corpus in the process.  Inevitably, these murals vary greatly both in prominence and quality, but some of them have generated significant positive buzz in the last two years.  One of the highest profile (and best-loved) of Indy’s murals is a giant recreation of Kurt Vonnegut, looking about as avuncular one could ever hope from the city’s most lovable curmudgeon.

In fear of seeming like too much of a killjoy, let me defend the mural not just for its great attention to detail, the formidable skill of its creator, and its unquantifiable boost to the city’s self-image by reminding the world that it was the boyhood home of one of the 20th century’s most respected satirists and social critics.  Hopefully Kilgore Trout would approve of my cynicism, though, when I follow this paean with a serious disclaimer.  Doggone it, this mural has Kurt beaming onto a parking lot along Massachusetts Avenue, a fashionable yuppie nightlife corridor that will inevitably turn into a mixed-use development eventually, shrouding the gargantuan Vonnegut into a back alley.  The salience the mural enjoys now from emptiness of the parking lot will eventually lead to its downfall—or, at least, its almost complete concealment when a building sprouts up.  (Then again, Kurt, ever the rake, may just as easily have approved of such a self-defeating gesture.)

But this Vonnegut dilemma hints on a recurring problem with many murals: the conceivers deliberately place them on blank walls that probably wouldn’t exist if it weren’t for the adjacent building the faced demolition years prior.  Such is the case for many of the murals in Philadelphia, as well as this earlier mural (predating the Super Bowl) that I blogged about a few years ago.  Too many murals serve as unintentional placeholders, beautifying a featureless flat surface until something else comes along that is far more likely to stimulate economic activity in the area—and, yes, that “something else” nearly always translates to a new infill development.

Michigan’s largest city can claim its own artistic ammunition, boasting a variety of sculptures and murals, both amateur and professional.  I’m not sure if Detroit’s murals emerged under a centralizing organization in the same way as the murals of Philadelphia or Indianapolis—after all, the city appeared at one time to have a Detroit Mural Factory that trained students in the practice, but I cannot find a centralized webpage with up-to-date information for this Mural Factory.  At any rate, the existing array of murals certainly offers a powerful contrast within a city that, by most empirical assessments, suffers a higher-than-average problem with graffiti, when compared to other American cities.  And though graffiti is far less common place across the American landscape than it is in most other countries, Detroit seems to have more than its fair share, no doubt due to the higher concentration of vacant, neglected or underutilized buildings.

So it is with no small amount of comfort that I recognize a highly effective mural that sits on Woodward Avenue, one of the city’s prime arterials, just south of Warren Street, in the heart of the Wayne State University campus. 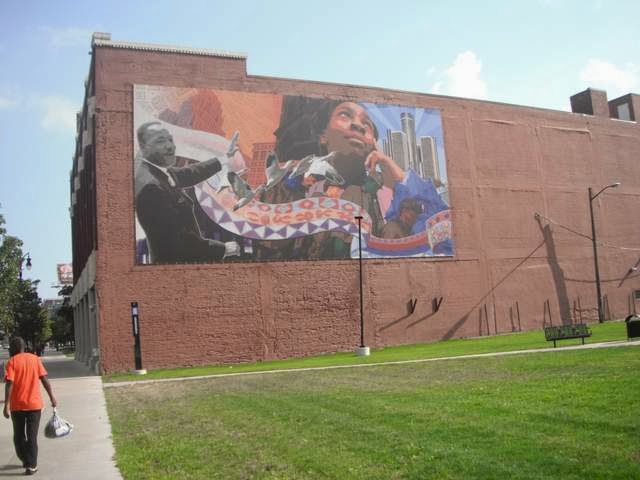 Whatever one might think of the mural’s broader aesthetic ambitions, it certainly adds color and texture to an otherwise monochrome flat surface.  It’s big—possibly bigger, all in all, than the lanky Vonnegut in Indianapolis.  But it shares the same predicament: it rests on a blank wall to a building whose kissing cousin came down years ago.  In its place is this big grassy lot. 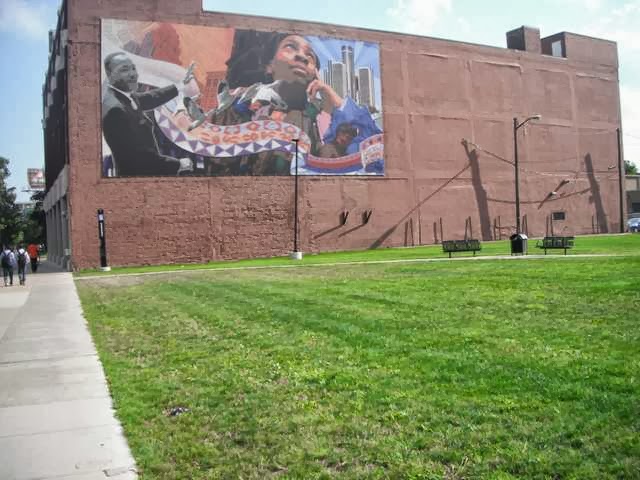 And the lot is expansive—huge.  Here’s looking at it from the other direction (northward) along Woodward: 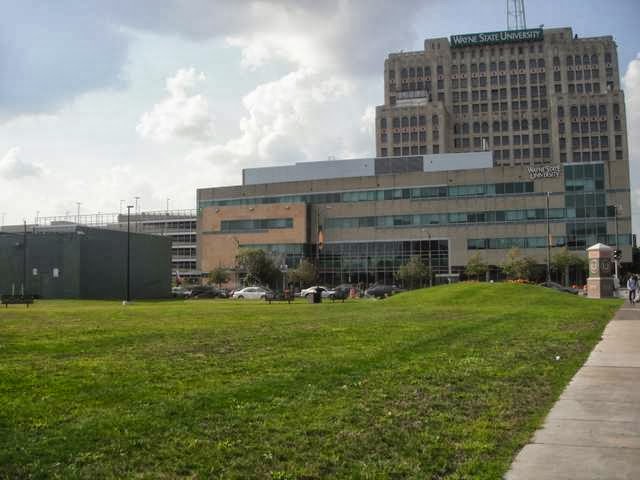 And pivoting a little bit to the left, in a northwesterly direction: 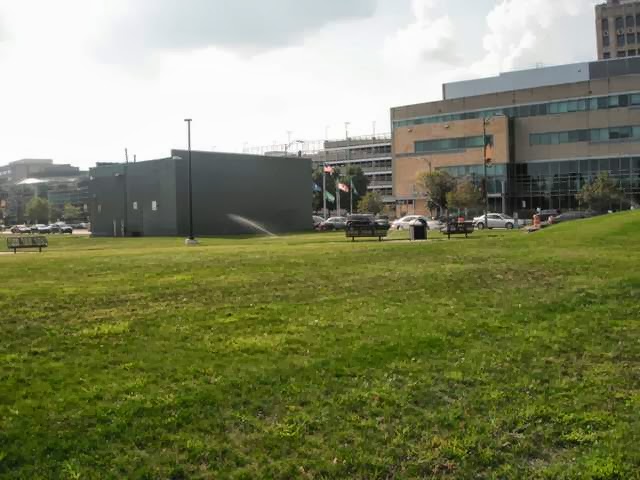 Not surprisingly, a city that has suffered as much extensive depopulation and disinvestment as Detroit has more than its share of vacant lots, the verdant reminders of mighty Art Deco buildings that once lined this corridor.  In many quarters of the city, the urban prairies will likely sit there for years to come.

But not here in Midtown, and certainly not on Wayne State’s campus.  Leadership at WSU has pushed significantly to shift its prevailing identity over the years.  Since its founding as a medical school and training college, the university has burgeoned and evolved into Michigan’s third-largest.  But it has rarely (if ever) claimed a significant presence of live-in students.  Long a commuter school, the reputation—particularly in Detroit’s darkest days of crime and disinvestment—was that students at WSU drove to the university from the suburbs, took their classes, and got out by dusk.  Throughout the 1990s, the campus did not even offer dorm living.  Though the transition is undoubtedly a bit more nuanced than I’m portraying here, the University’s leadership and economic development arm realized that the chasm between the school and the surrounding Midtown neighborhood was only growing.  And it certainly wasn’t helping the desirability of being a student at Wayne State.  As a result, the school has engaged in a flurry of both dormitory construction and partnerships with developers to encourage a greater student life around the campus that lingers after hours.  Consequently, Midtown has as bustling pedestrian scene that was scarcely visible 20 years ago.  More eyes on the street translates to greater perception of safety, and the presence of a youth culture with some disposable income has spurred a concomitant college-town retail scene.

This broad scythe at a history of Wayne State’s involvement in Midtown inevitably cuts some corners (pun intended), but in the long and short of it is, it’s only a matter of time before this grassy corner at the intersection of Woodward and Warren will host a new building, if not several.  And it’s equally certain that, in due time, a developer seeking to maximize the FAR (floor-area ratio) on the parcel will want to build in very close proximity to the existing building with the mural.  The developer may even choose to touch the adjacent structure.  Which means that this elegant adornment could fall into oblivion, frustrating not just the artist but also the community support that helped to conceive it.

Fortunately, the minds behind the mural have an ace up their sleeve. 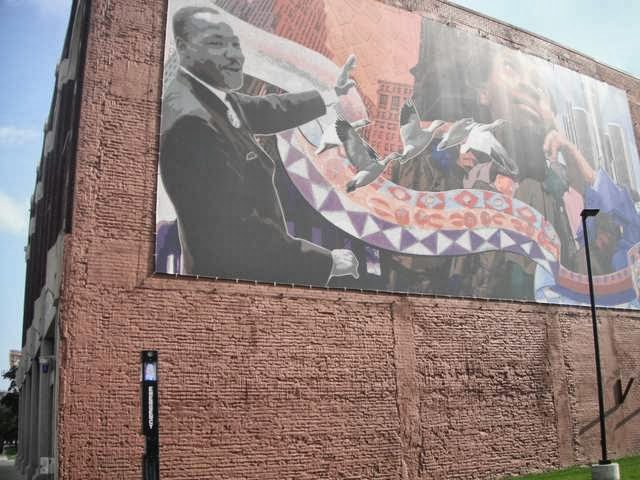 Notice the tiniest shadow at the lower left corner of the mural?  That’s right—it’s not directly painted onto the wall. 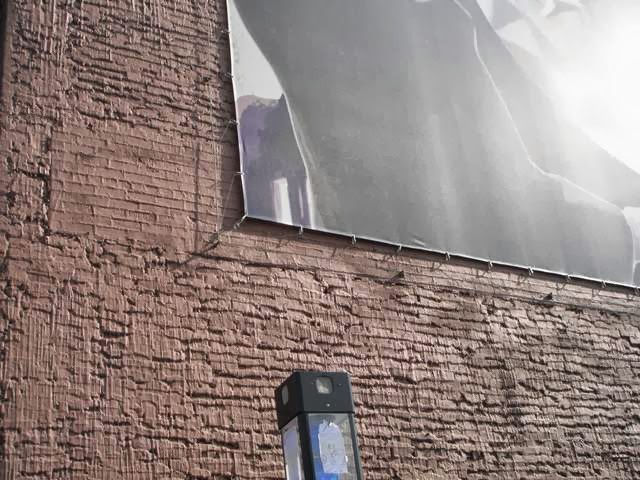 It appears to be a sort of canvas that has been stretched to tautness through tying its corners to hooks implanted in the mortar between bricks.  I suppose, if we’re purists, this means that this piece of artwork no longer fits the traditional definition of a mural.  But it will likely fake anyone who isn’t scrutinizing.  And, more importantly, it means that the canvas can come down when a building goes up next door, then get installed somewhere else.

From an artistic standpoint, my suspicion is that this display has lost a bit of credibility.  After all, it didn’t require an artist’s careful assessment of the space, nor the dedication of applying paint to a rough surface from a vertiginous position.  Though clearly “drawn” as an original, it’s quite possible this canvas’s existence depended upon a digital magnification.  So maybe it’s cheating.  But the fact remains that neither WSU, future developers, nor whatever arts program finally implemented the “mural”—none will have to witness the demise of this work of art in a few years.  The same can’t be said about Kurt Vonnegut in Indy, nor the hundreds of murals emblazoned on blank sides of buildings in Philly.  Migrating this canvas to another big wall should seem like a minor effort in comparison, and in a city that has witnessed so much renegade art in the wake of its abandonment, the citizens will finally get to see a painting salvaged, as welcomed new construction fills the void.