Ramping up the capacity of a rural highway—but without the ramps.

One of the biggest yet quietest challenges in managing capital improvement projects is maintaining a basic level of functionality during major upgrades.  My suspicion is that the implementation of major capital improvements is usually quiet because—more often than not—these upgrades take place with few disruptions.  Think about it: the basic etymology of “infrastructure” reveals how rarely we are conscious of its existence.  The Latin infra means “under”, denoting “below” in terms of location and connoting the same in terms of hierarchical prominence.  We don’t notice it unless it isn’t running as it should.  And various branches of government—municipal public works departments or state departments of transportation—are constantly upgrading infrastructure, much of the time while allowing at least a minimum functionality.  Yes, when upgrading a bridge within a sparsely traveled country road, it is like the servicing agency will close that road segment altogether.  But if it’s a major arterial where an outright closure could seriously vitiate commuter mobility and harm the local economy, most infrastructure project managers will sacrifice speed of reconstruction to allow at least some operability during the entire process.

While not of national prominence, the upgrade of US 24 certainly matters a great deal to citizens of northeast Indiana and northwest Ohio.  One of the original highways that the Joint Board on Interstate Highways developed in its numbering system (after much prompting by the equivalent of today’s AASHTO), the Ohio stretch largely paralleled the sinuous trajectory of the Maumee River, connecting riverfront towns such as Napoleon and Waterville to the much larger cities of Fort Wayne in Indiana and Toledo in Ohio.  As logistical demands between Fort Wayne and Toledo grew, the riverfront towns became engulfed in traffic, diminishing their appeal and frustrating the truckers who had no need to transect these much smaller municipalities.  Grassroots initiatives from the 1960s in both states resulted in proposals to improve US 24, but only two four-lane bypasses around Napoleon and Defiance materialized.  At one point, the Ohio Department of Highways proposed widening US 24 to four lanes through the heart Waterville and along the Maumee River, but this incited immediate opposition in the community.  In addition, a stretch of the highway west of Defiance developed a reputation for head-on collisions, prompting the Toledo Blade in the 1980s to christen the entire thoroughfare “the Killway.”

Last August, a few hundred citizens gathered in Waterville, Ohio to celebrate the completion of the Fort to Port project, a comprehensive upgrade of US 24 that bypasses most of the communities by cutting across farmland to the north of the river.  Motorists heading between Fort Wayne and Toledo will never need to steamroll through these smaller towns.  And—best of all—the new and improved US 24 has few at grade intersections, helping it to function almost like a limited access interstate highway. 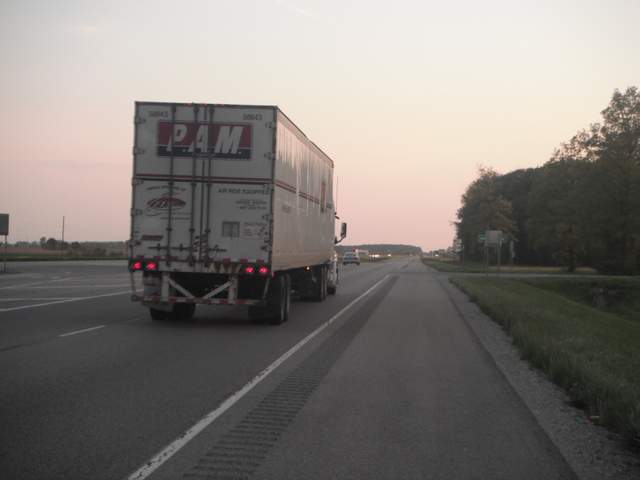 Both states have waffled on exactly how sophisticated the upgrades should be.  Over the years, Indiana’s DOT improved much of its section of US 24 to four-lane expressway status, occasionally introducing cloverleaf and parclo interchanges to endow the thoroughfare with an almost limited-access status.  Budget considerations in the previous decade prompted the State of Indiana to renege on original plans to convert the easternmost leg (from the Fort Wayne I-469 beltway to the Ohio state line) to limited access, but this time the Indiana communities objected.  While residents in the Fort Wayne area argued that heavy truck traffic justified a full upgrade with flyovers and interchanges, INDOT rebutted that traffic volumes aren’t significantly high enough to build limited access.  Nonetheless, Governor Mitch Daniels announced in late 2007 that upgrades to the easternmost segment would include interchanges.  Six years later, the Indiana segment of US 24 functions almost completely like a limited access highway.  But then we get to that Ohio section. 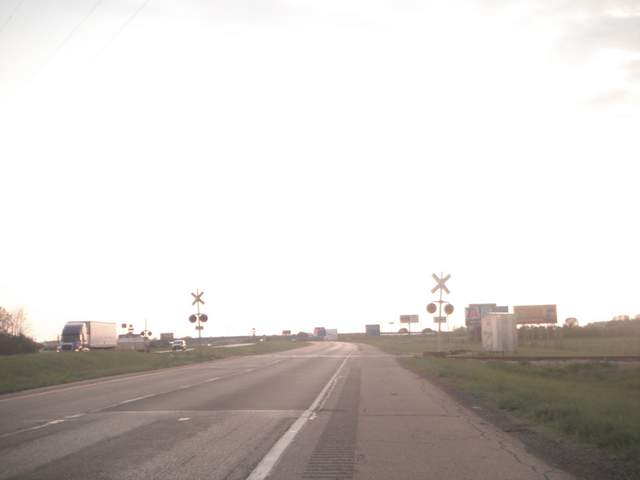 [Forgive the photos.  The majority were taken at dusk and are less than crisp.]

The railroad crossing is more than enough evidence that Ohio’s share of US 24 from Toledo to the Indiana state line is not limited access in its entirety.  If it were, the above photo would be impossible: a true interstate highway never intersects with railroad lines at grade.  Perhaps this anomaly helps to explain the mysterious use of the word “exempt” below the crossings signs. 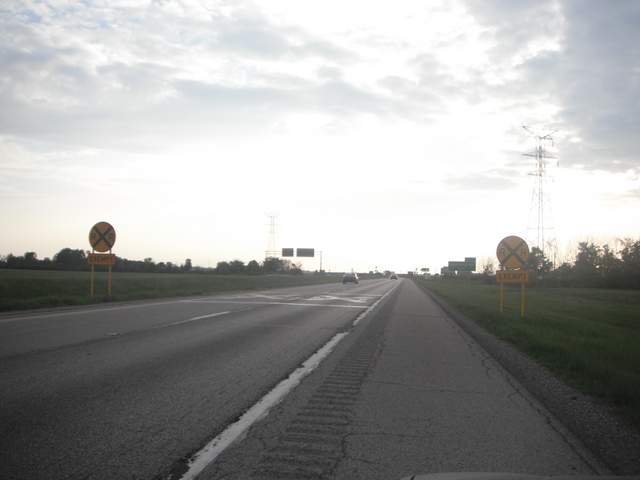 I’m not sure what the word means in this context, but it may have something to do with the fact that this railway is “exempt” certain standards that might otherwise apply if this were a typical limited access highway.  The ambiguity is confusing.  Fortunately, railroad crossings along US 24 in Ohio are relatively few and far between.

More compelling is the way ODOT treats conventional intersections with other vehicular roads. 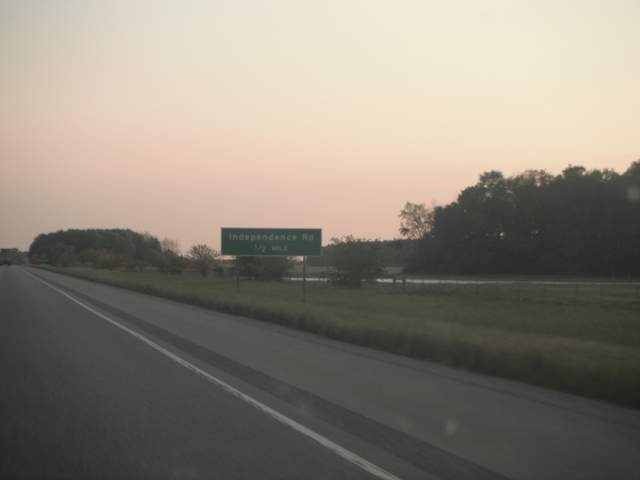 Though hardly ubiquitous, intersections such as the one above—with a rural collector road—are relatively common along Ohio’s US 24. After a superficial glance, it might not look particularly strange.  After all, the sign is preparing motorists for an upcoming egress opportunity, in much the same way signage would communicate on a limited access highway.  But a later sign directs motorists to different lanes, depending on whether they desire to turn down these intersecting roads. 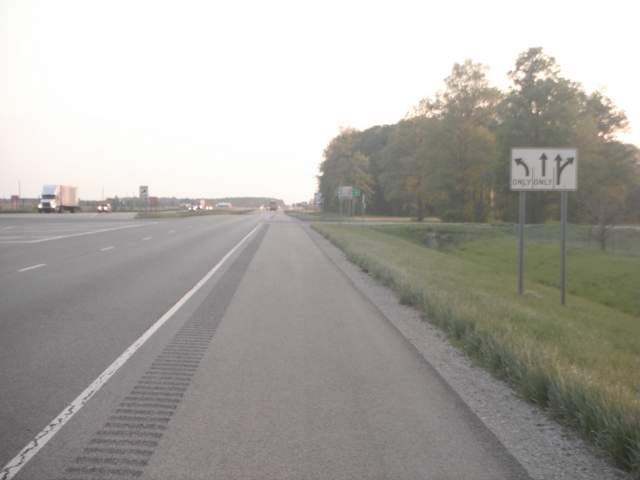 Notice the sign to the right of the shoulder, indicating the various turn lanes.  Even it might not seem so strange on its own terms.  But look at US 24 at an intersection—the exact configuration that sign is referring to. 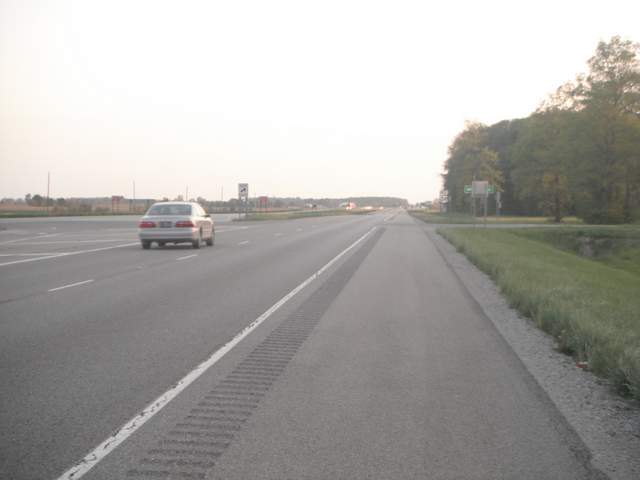 Notice the problem?  The highway only features two lanes.  A special left-turn lane to the left of the sedan in the photo is faintly visible as painted, but it also has a hashed out buffer between it and the main two cartways.  But it is unclear if the turn-lane sane is referring to this, since the sign shows no buffer zones between lanes.  Thus, the sign appears that it could be referring two three lanes when only two exist.  And this apparent contradiction could pose some real safety hazards for motorists seeking to turn right at the intersection.  After all, what is it trying to say?  If the left lane is a left-turn lane, then that means the far right lane is a right-turn lane—but that is a ludicrous suggestion because it would force vehicles to slow to a crawl and turn a hard, 90-degree right.  Yet if vehicles slow to a crawl on this lane—the same lane where motorists also have the option of zooming forward—it could result in a car coming from behind and slamming into the vehicle slowing to turn right.  On a high-speed freeway such as US 24, vehicles making turns need complete protection, but this lane configuration does allow it—unless the vehicle seeking to turn right swerves onto the shoulder with the rumble strips, in order to make that turn.  At least such a maneuver would afford the motorist some protection as he or she slows down in the shoulder.  But who designs roads so that a car must veer into the shoulder in order to make a conventional right turn?

I’m doing my best to narrate these mediocre photos, but perhaps it’s a more apt “you-had-to-be-there moment”.  This predicament is difficult to describe.  The fact remains that Ohio’s US 24 abounds with intersections such as these, made all the more dangerous because they are the only type of intersection we are going to find along this highway.  US24 in Ohio has no stoplights, and speeds are well over 60 miles per hour.  Amazingly,  even in this day and age, ODOT designed intersections such as the ones above, on a thoroughfare that intends to channel traffic with the same level of service we would expect to see on a limited access highway.

My guess is the majority of US 24 upgrades in Ohio have won accolades from people who live near this thoroughfare or use it regularly.  It achieves what it was meant to do: provide an alternative, high-speed route between Fort Wayne and Toledo that doesn’t overwhelm the numerous small towns along the Maumee River.  But it falls in an uncomfortable middle ground between a conventional arterial road and a limited access highway.  The two states upgraded the road considerably so that it almost has no direct intersections…but they didn’t quite go all the way.  And now the Ohio segment features at least a dozen intersections that look like nothing else I’ve ever seen.  As long as the road remains uncongested, these bizarre right turns should not result in any major collisions.  But odds are strong that US 24’s traffic volume will only grow in time.

Perhaps the existing configuration is a mere “placeholder”, preparing the right-of-way for the eventual upgrades it needs to become a fully functional limited access highway.  But, regardless of the future of US 24, the current design evokes serious compromise and negligent road design.  It’s still infrastructure, and most of us don’t contemplate the topic out of fun.  As mentioned earlier, we should remain unaware of high-performance unless something goes wrong.  My only hope is that a high-speed rear-ending never transpires along this highway—a road in which, as we celebrate its achievements, we become complacently blind to its weaknesses.  And then we get the “killway” all over again.