My latest post is up at Urban Indy.  It scrutinizes a small park on the near northside of Indianapolis–a park so unremarkable that most of the city’s residents have probably never heard of it.  Wedged between the Fall Creek Place neighborhood and its namesake Fall Creek, Kessler Park is hardly an unattractive park.  Clean, easily accessible, generously landscaped, and boasting part of a creekside greenway trail, the park has everything an urban park needs…except people. 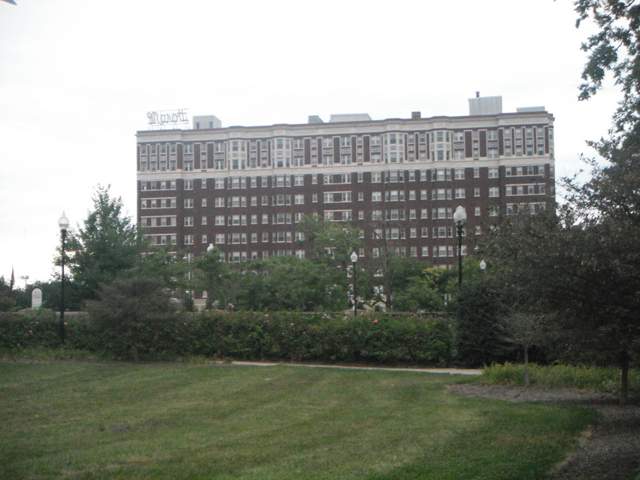 It’s empty nearly 100% of the time.  What seems to be the problem?  The surrounding neighborhood is, at least by Indianapolis standards, relatively high density and pedestrian friendly.  But, at the same time, the neighborhood is not so crowded that the houses lack private yards.  Meanwhile the nearby Ivy Tech Community College campus brings students to the area, but it’s overwhelmingly a commuter school, so the numerous daily visitors don’t translate to much pedestrian traffic.  And this park–named after George Kessler, the designer of the city’s park system–remains ignored.

What could the park’s designers–or Indianapolis Parks and Recreation, for that matter–have done to make Kessler Park succeed?  Obviously it hasn’t yet found the competitive edge that could make it at least something better than an oversight.  The designers seem to have thought that the park could become desirable on its own terms, so they didn’t integrate any sort of programming or specific use into the site plan.  We see the results.

A counterpart in every sense of the word is Campus Martius Park in Detroit.  It might seem like an odd analogy, since this park sits in the heart of the Motor City’s downtown, compared with Kessler’s tucked-away spot along a residential street.   But Campus Martius does enjoy some obvious advantages; for starters, it’s among the most lively civic spaces in this beleaguered city. 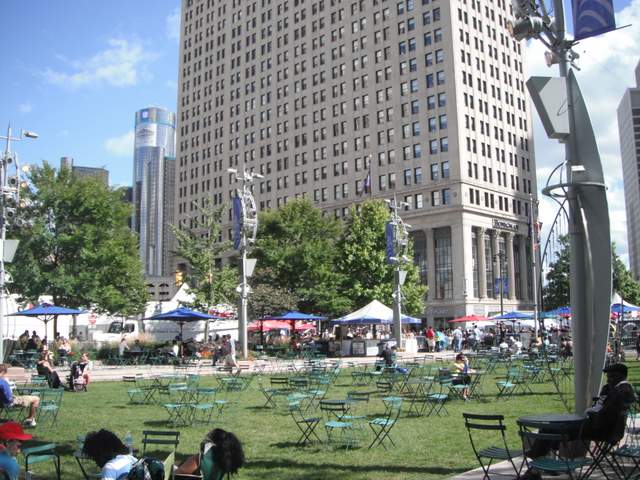 The park, re-established several years ago on what had previous been a sterile and unnecessary traffic circle, has a little bit of everything: a fountain centerpiece, a war memorial, the Fountain Bistro restaurant, a lawn with chairs for viewing concerts, the stage to host those concerts, and even a beach and a cabana bar.  Even when downtown Detroit is devoid of a good crowd (which can happen on any given weekday after 6 pm, unless a Tigers Game is taking place) Campus Martius park is still generally humming.  But could all that programming be a little overkill?

The goal of the article is to scrutinize the idea of programming our urban open spaces with destination-type venues, in order to lure the public.  Although this technique seems to be working at Campus Martius, such intensive cramming of activities into little more than an acre robs the space of its spontaneity.  People aren’t enjoying the space on its own terms; they’re responding to the many sales pitches it has to offer.

Ultimately, the programmed park reaches unprecedented extremes in they city of Yerevan.  This Armenian capital took its circular beltway–designed as part of the master planned downtown during the early Soviet era–and has sold off the majority of the land to cafes and restaurants. 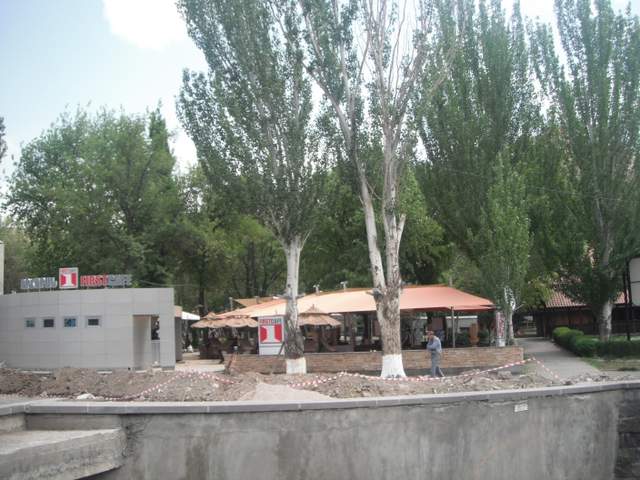 Most of Yerevan’s parkland is completely commercialized, to the point of compromising its accessibility.   Bicyclists, for example, must find another outlet, since the extensive Circular Park is overwhelmed by vendors and small businesses that crowd the pathway.  It almost looks like an amusement mark.

Where does this leave Kessler Park in Indy?  Obviously the current, unprogrammed condition isn’t working, but it should avoid the opposite extreme from Detroit and Yerevan as well.  Truly visionary landscape architects recognize that a great urban park doesn’t simply offer restaurants, pseudobeaches and other novelties–they should reveal sensitivity both to the landscape and the green space demands of the surrounding community.  In short, exactly the sort of park designed by George Kessler and his contemporaries.

The full article at Urban Indy provides far greater description and numerous photos of all three city parks.  As always, comments are welcome, both here and on the Urban Indy site.

PrevRamping up the capacity of a rural highway—but without the ramps.
When egalitarianism rests on two wheels.Next