Forgive the hiatus.  I just relocated to the city featured in this article.  Set in metro Detroit (the first, no doubt, among many), it’s straightforward enough that it doesn’t really demand a long introduction or exposition.

From the outside, this unusual shopping center looks like it’s on the fritz: 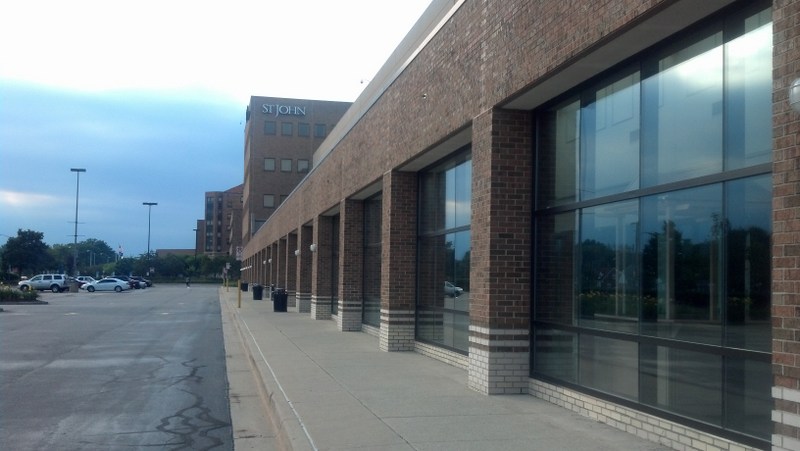 No signs above any of the windows; it doesn’t seem like anything is going on.  The inside—in which the building reveals itself to be little more than a strip mall with an enclosed hallway linking all the stores—isn’t really any more promising. 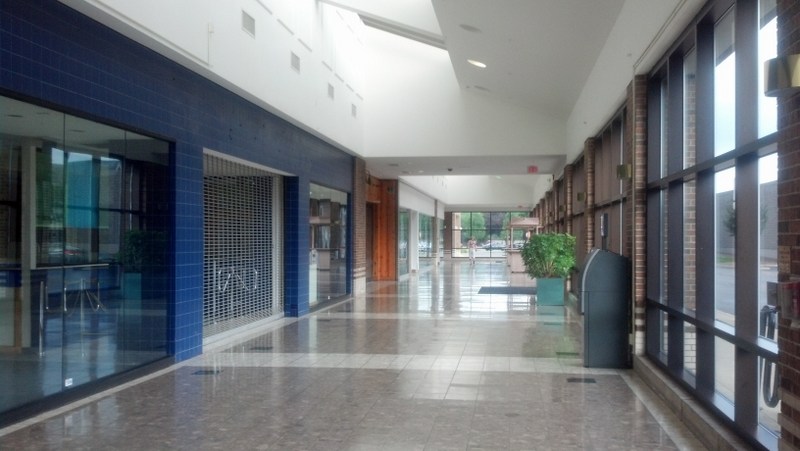 After all, not a single storefront along this silent hallway has a tenant.  From the looks of things, this row of shops has been vacant for quite some time.  Notice the one on the left. 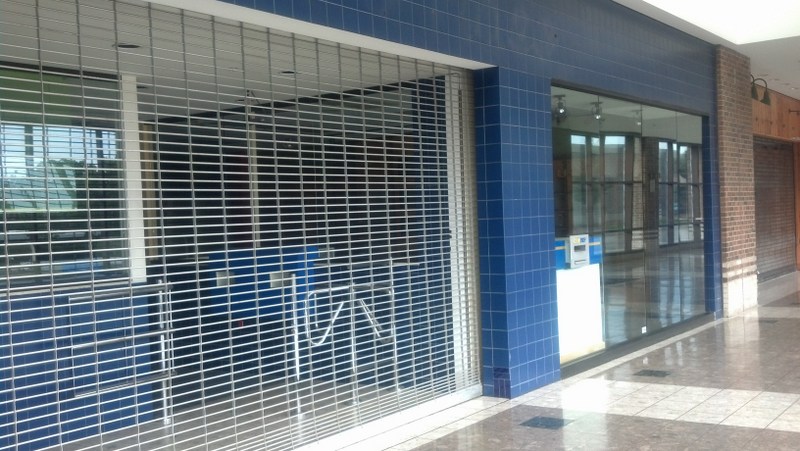 The color scheme should at least hint at the logo of this formerly ubiquitous chain, but if it doesn’t, the slot to the right of the gate is a dead giveaway. 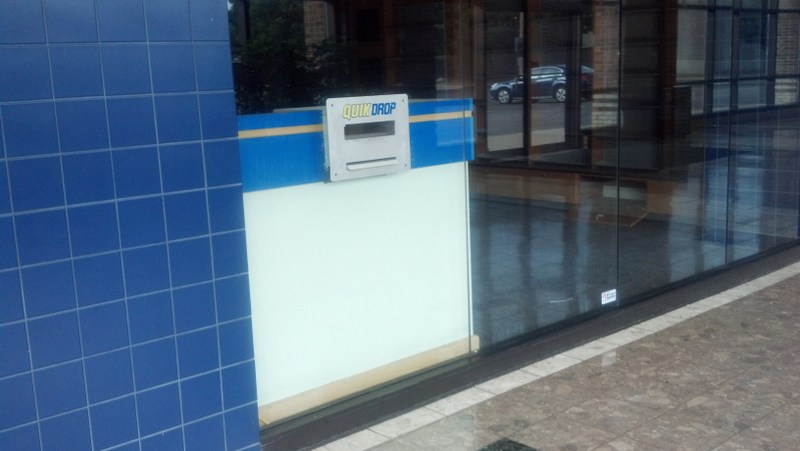 That’s right; it’s the broadly recognizable as the after-hours depository for the once-mighty Blockbuster Video.  Since this company faded to nearly nothing about four years ago, chances are strong that this storefront has sat vacant for quite some time.  A few doors down, the rustic entryway suggests the former home of a Bath and Body Works. 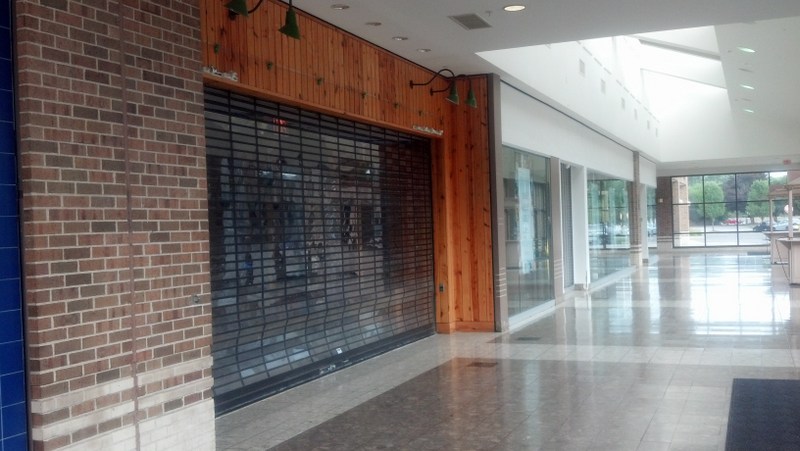 The hallway is silent.  But this strip mall is L-shaped, with storefronts facing both of the intersecting streets. Turn the corner within the mall, and it’s an entirely different story. 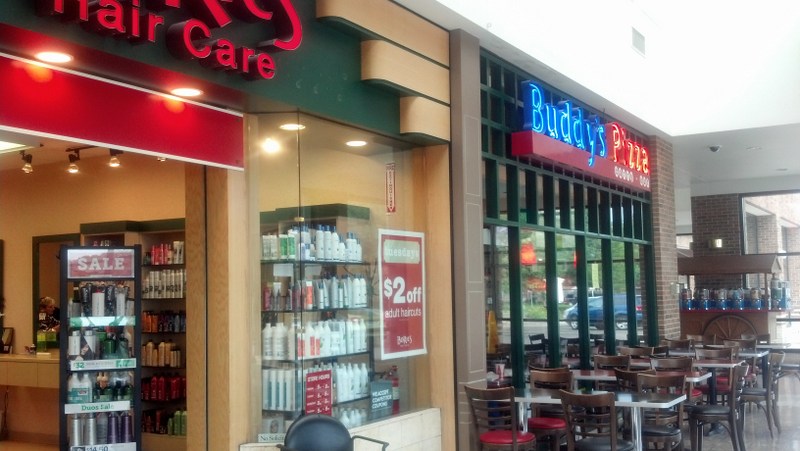 All the storefronts are occupied, and the entire shopping center looks fine—quite nice, even. 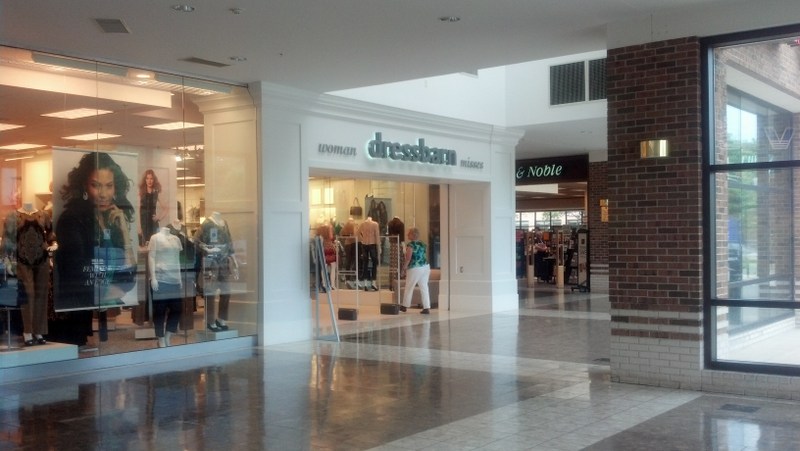 The tenant mix includes both mom-and-pops and national chains.  If the mom-and-pops were fledgling establishments, one might still be able to argue that the strip mall is declining, and eventually all the chains will leave.  But that doesn’t seem to be the case here.  Buddy’s Pizza has multiple locations in the Detroit area. 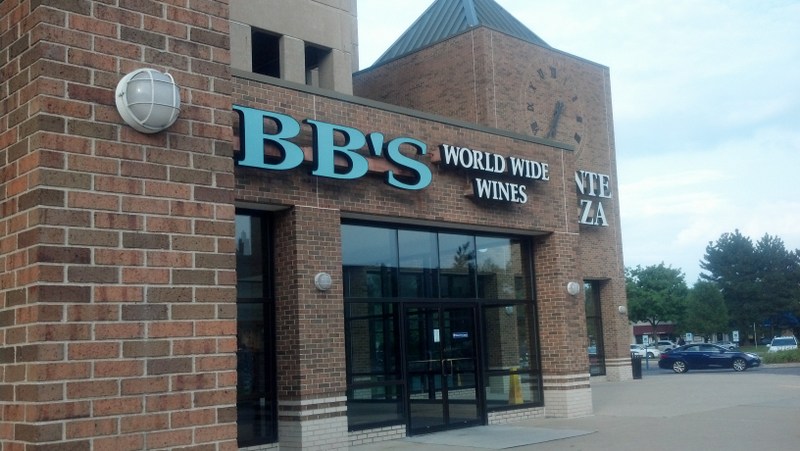 And Gibb’s World Wide Wines has apparently been in business for 76 years.  Down the corner from the national mid-priced chain Dress Barn is a Barnes and Noble Booksellers, serving as the apparent anchor tenant—hardly one that you’d see in a dying retail center. 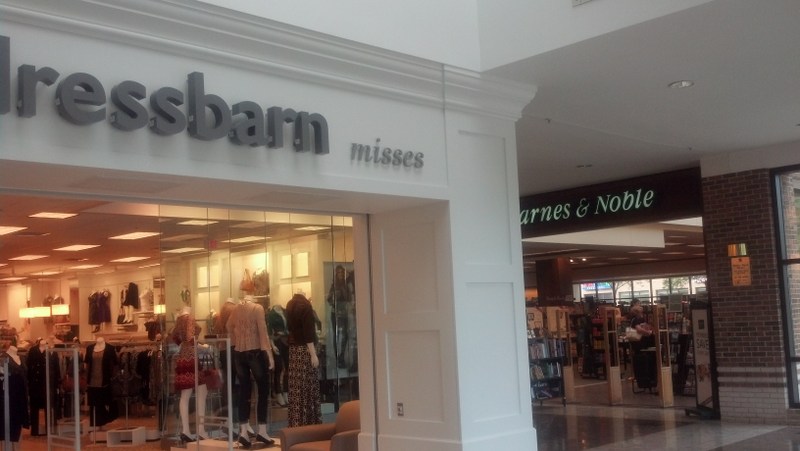 Interestingly, the Dress Barn is new…to that spot.  A label scar (which I regrettably failed to capture in a photo) revealed that it previously occupied a different space in the strip mall—in the half that is now completely vacant.  The relocation is recent.

So what’s going on with one half of the strip mall?  A little knowledge about the physicality of the structure might help.  Here’s another outside view of the vacant half of the L shape: 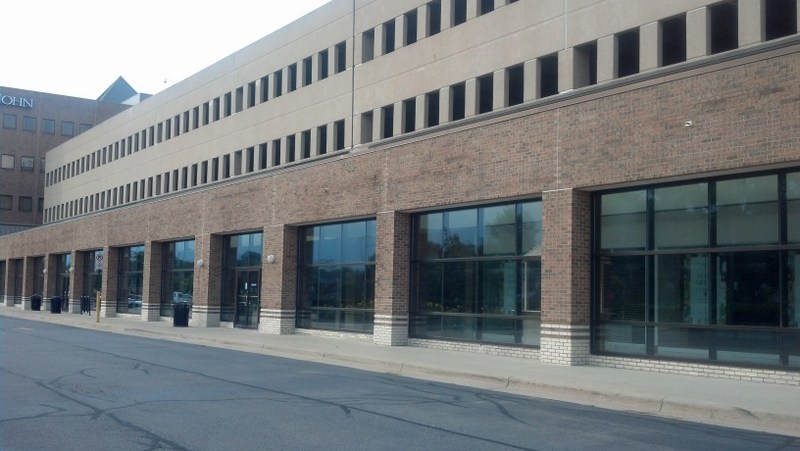 It’s the lowest level of a parking garage, and the entire structure is connected to the St. John Hospital and Medical Center, resulting in an unconventional healthcare/shopping complex.  The name of the retail component is Pointe Plaza.  After questioning a clerk at one of the fully operating stores, I learned why one side was so vacant.  The row of vacant storefronts will allow enough consolidated space for one of the major gym/health clubs to move in, such as an LA Fitness.  I was unsuccessful in reaching Schostak Brothers, the property management company, to confirm this rumor, but it makes sense: a gym seems like an appropriate tenant for a complex that directly abuts a hospital.  Due to the gym’s size, it might serve as an additional anchor counterpart to the Barnes and Noble at the opposite end of the L shape.

But the peculiarities to Pointe Plaza extend well beyond the structure itself.  They’re political too. 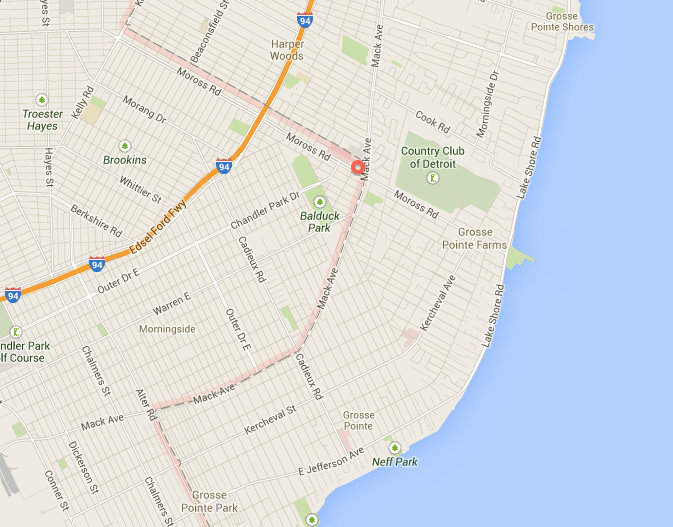 This strip mall/garage/hospital sits right at the corner of Mack Avenue and Moross Road, as indicated in the map above (the small red circle is the site of the Plaza), and in the photo below, with the garage poking above the trees in the background: 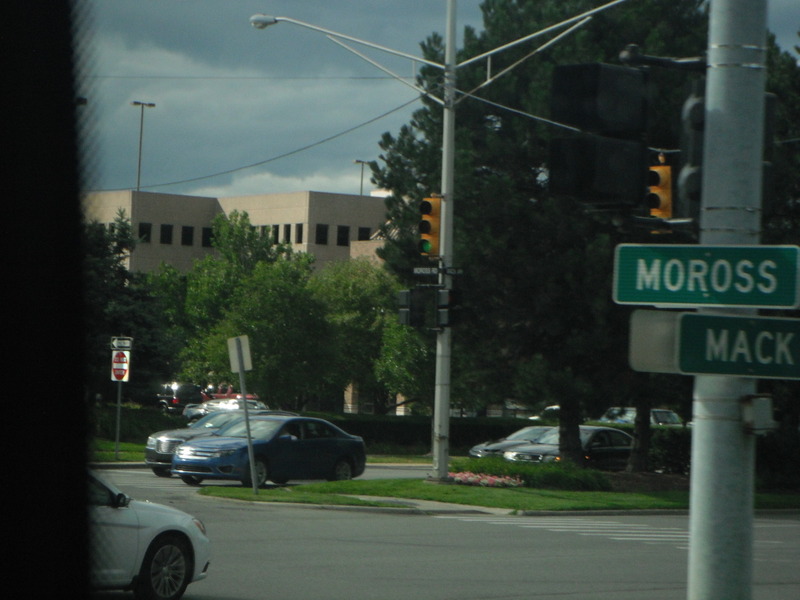 Detroiters generally know this intersection as the boundary between Detroit the city and two of its suburbs: Grosse Pointe Farms, to the east of Mack Avenue, and Grosse Pointe Woods, to the north of the hospital.  In most metros, central city/suburb boundaries carry obvious significance in terms of distinctions between municipal tax burdens and ordinances, but in this case, those differences are unusually pronounced.  Detroit, as virtually everyone knows at this point, is among the most impoverished and economically challenged large cities in the country.  Meanwhile, Grosse Pointe Farms and Grosse Pointe Woods each have median household incomes of over $85,000.  I have yet to witness such an extreme juxtaposition between two municipalities anywhere in this country.  While the Detroit side of Mack Avenue in this district is in significantly better economic health than many other parts of the city, it still visibly lags far behind the affluent suburb on the opposite side of the street.

Pointe Plaza sits at the absolute easternmost vertex in Detroit city limits.  And, as the map indicates, it hugs the Detroit side of this inordinately influential boundary.  (The actual Detroit line is at Kingsville Avenue, just to the north of Pointe Plaza, which forms a three-way boundary between Detroit, Grosse Pointe Farms, and Grosse Pointe Woods.)  The proximity of the shopping center to this boundary inevitably complicates the property management agency’s ability to attract tenants, because its identity straddles sociological extremes.  One might expect that the management company would prefer a tenant mix more reflective of the affluent Grosse Points than the long-embattled Motor City, and the best way, of course, is to suppress every potential reference to Detroit.  A simple online search suggests that Google is giving Schostak Brothers, the property managers, an intrinsic advantage: 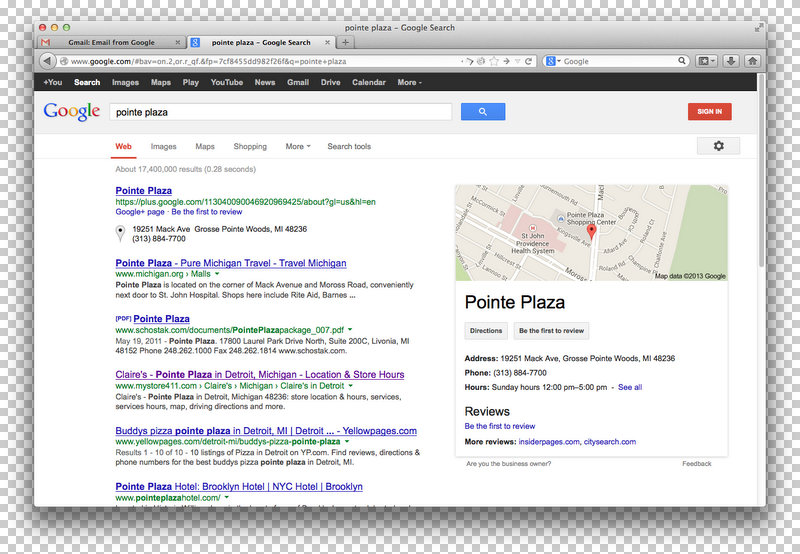 Not only does Google yield an address that incorrectly lists the facility’s address as Grosse Pointe Woods, but the thumbnail map falsely depicts the facility north of Kingsville Avenue—the boundary that would place it in Grosse Pointe Woods instead of Detroit.  The structure listed where Google Maps shows “Pointe Plaza Shopping Center” is something completely unrelated and definitely not a strip mall.  Meanwhile, Pointe Plaza’s identity online places it squarely in posh suburbia.

I decided to test this locational confusion a bit further, by asking each of the Pointe Plaza tenants a simple question: “Which city are you in?”  Of the seven tenants, only two correctly responded with Detroit.  Just to make sure I wasn’t misinterpreting the information available to me, I also rephrased my inquiry as a leading question: “Are you guys in Detroit?”  Interesting, all but one respondent conceded that yes, they were in Detroit, but most of them mentioned that they were right on the boundary with two of the Grosse Pointes.

Retail has long enjoyed a privileged status in the American commercial landscape: we always build far more facilities than there are tenants, meaning the majority of them can be incredibly picky about location.  The emergence of online shopping has only compounded the issue, because fewer goods and service providers depend upon bricks-and-mortar facilities to conduct their trades.  The fact that Pointe Plaza has avoided any stigma of sitting within the Detroit boundaries is a boon to this bankrupt city, since, for taxation purposes, the assessed value of the commercial property is undoubtedly higher than it would be if it could only attract marginal local tenants.  Only time will tell if this shopping center actually does absorb a major health club chain.  If it doesn’t, it may affirm my initial suspicions: that the vacant wing of this L-shaped strip mall has to overcome the challenge of directly looking out upon the impecunious city of Detroit.  Hopefully a revisit to Pointe Plaza in 2014 will prove me wrong.

PrevAn apartment’s reversal of fortune.
Ramping up the capacity of a rural highway—but without the ramps.Next

4 thoughts on “Retail’s retreat from risk.”