An apartment’s reversal of fortune.

This summer has obviously been a pretty dry spell in terms of blog posts, but now that I just arrived back in the country a few days ago, I hope for the pace to pick back up before too long.  August may end up a tad scattered, since I will begin the month with a move to Detroit and a new immersion program.  But I also expect this change in locale to elicit some exciting new topics for contemplation, reinvigorating the continual learning process.

Keeping up the theme of continuous learning, I offer a groundbreaking post today.  While it isn’t my first revisit of an old blog topic, this is the first time I’m gone back to view an old site precisely with the purpose of showing how my assumptions and conclusions were apparently originally wrong.  Late last fall, I covered familiar ground by delving into the Westminster Apartments, 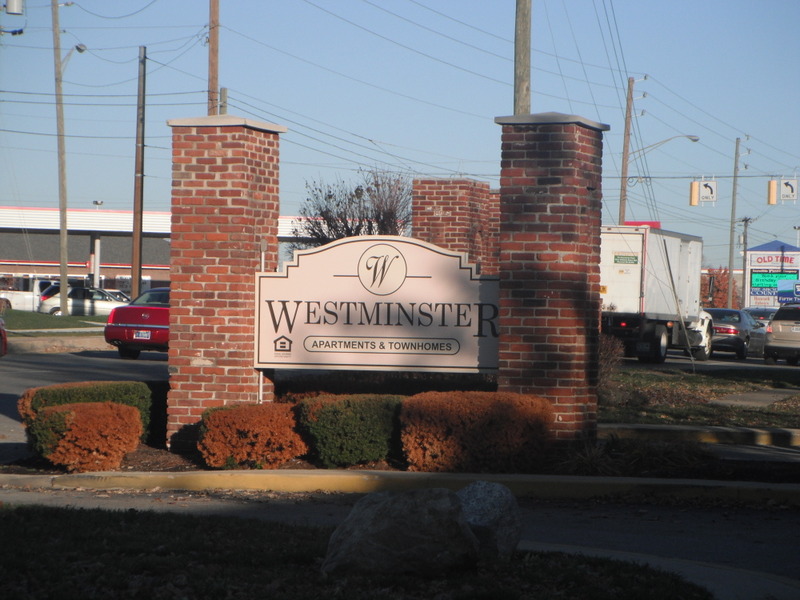 Upon first glance, Westminster was a pretty run-of-the-mill place: an auto-oriented, low-rise complex dating from around 1970 that manifested the telltale signs of decline: visibly worn common space, wooden decks and siding that were sufficiently rotted to compromise the overall stability, meager landscaping, obvious vandalism of the buildings through graffiti. 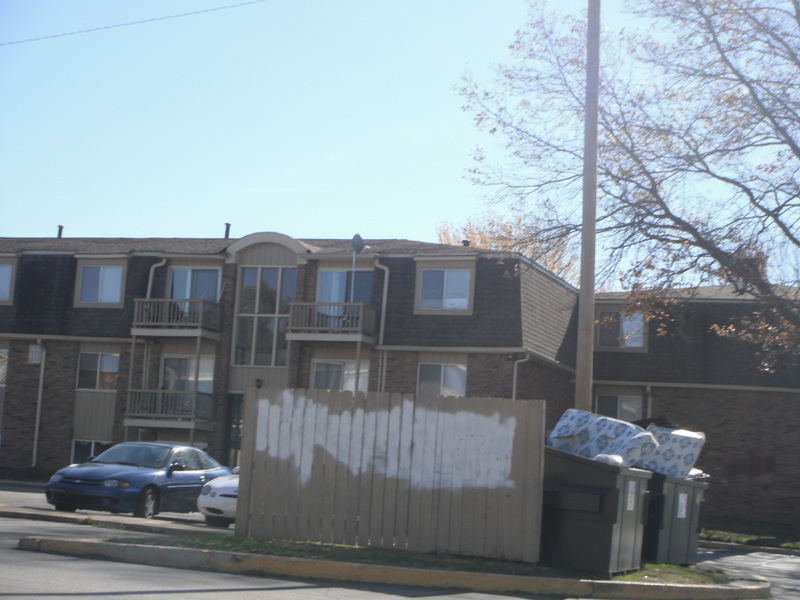 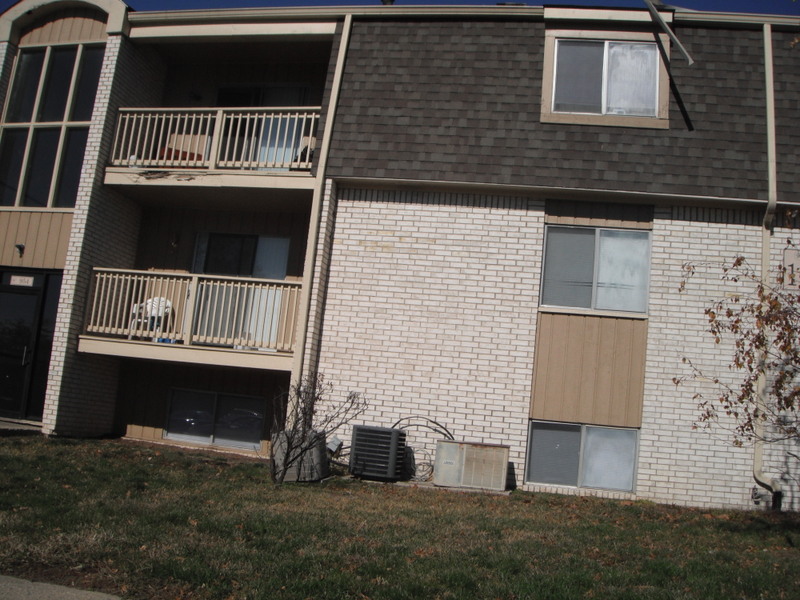 Like many apartment complexes in Indianapolis and across the nation that date from this time period, what began as middle-class rental housing had devolved over the years, as newer, more modern buildings opened in the vicinity, featuring newer appliances and other amenities.  The property management team for Westminster could have maintained the buildings, but, because federal Section 8 benefits will guarantee them secure tenancy no matter how poor the condition of the buildings, the owners had no real incentive to improve the structures.  After all, even though Section 8 caters to a clientele with incomes far below middle class standards, the institution writing the majority of the rent checks—i.e., the government—always pays in time, meaning that landlords actually get an incentive for letting their property deteriorate to the point that it only can attract Section 8 tenancy.  It appeared last November that this phenomenon was exactly what had afflicted the Westminster apartments.  It’s happened to dozens of buildings in the suburban reaches of Indianapolis over the past 20 years, where suburban units that previously attracted young professional families are now overwhelmingly lower-income.  The result is that suburban districts of Indianapolis that were virtually crime free in the 1980s are now hosting concentrated poverty and all the concomitant social woes.

But there’s a catch: Westminster is not in the Indianapolis city limits.  This building sits just south of County Line Road, squarely within the Indianapolis suburb of Greenwood.  And Greenwood remains a fast-growing, desirable, middle- to upper-middle class suburb, with well regarded schools, a flourishing mall, an expanding greenway network, and a growing logistics/trucking industry that capitalizes on the suburb’s strong access to Interstate 65.  By all metrics, the Westminster should not needto downgrade; it could remain attractive to middle-class people if only the property managers had bothered to maintain it.  But since they hadn’t, it had suffered the same malaise as numerous complexes in Indianapolis city limits, where school districts are often much spottier and crime a persistent concern.  What went wrong with Westminster?

Nothing, apparently—I was wrong all this time.  It fell under new ownership last November and promptly underwent a significant renovation.  They’ve already rebranded the place with a new logo. 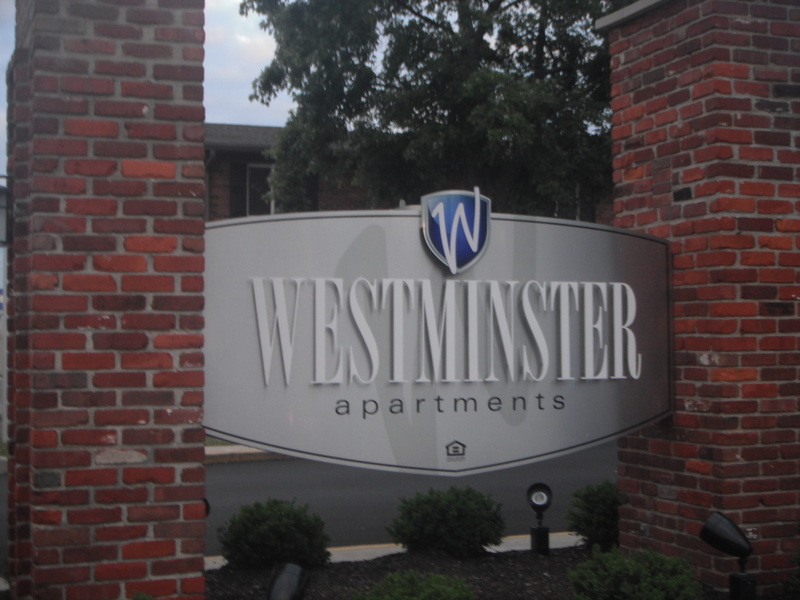 And it looks like those renovations are substantial—much more than just a slick new sign at the entrance.  Gone is the spraypainted graffiti, the sagging gutters, the termite-infested wood. Here’s what some of the new ones look like: 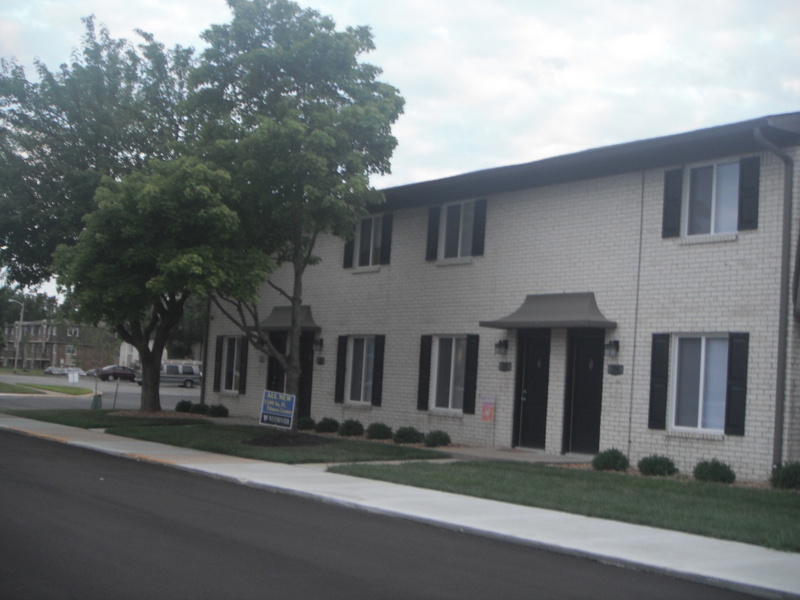 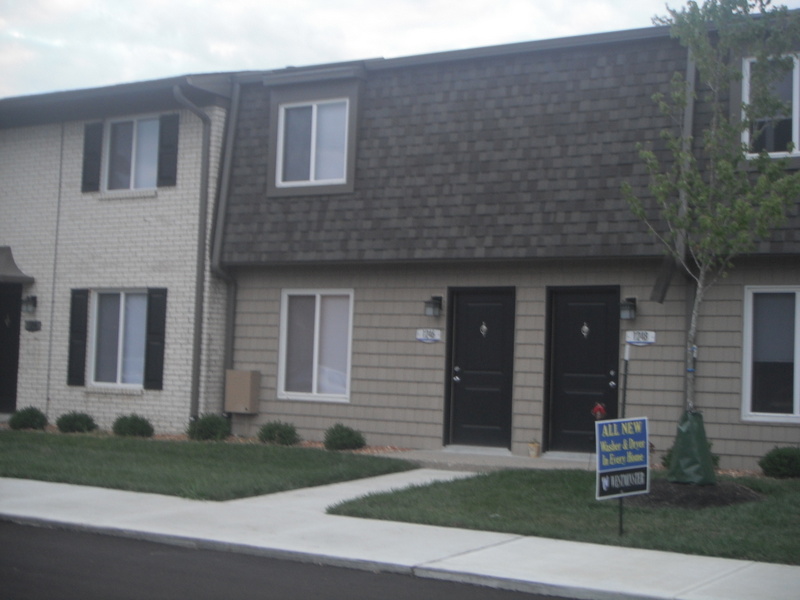 Notice the newly planted shrubs, and the sapling in the second photo.  Obviously the buildings received a facelift, but were the changes more than superficial?  A glimpse at some of the buildings still under renovation would suggest that the process has been comprehensive. 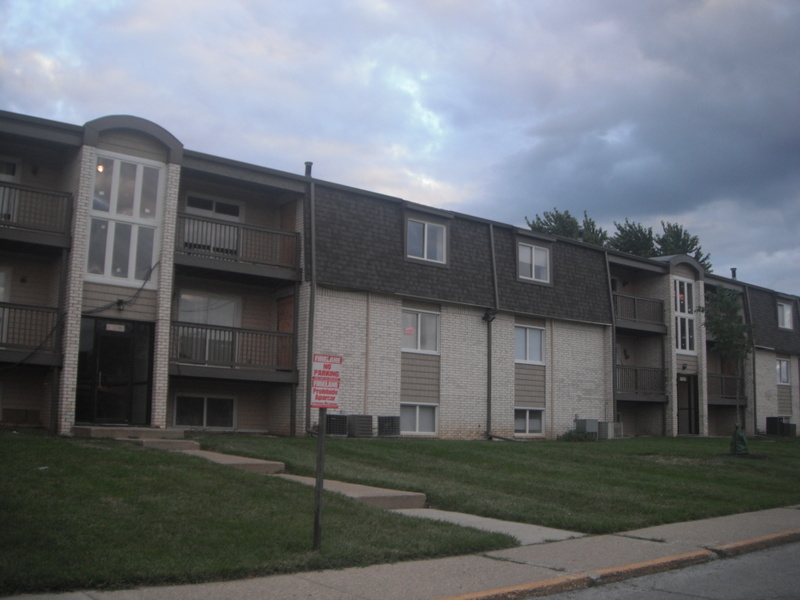 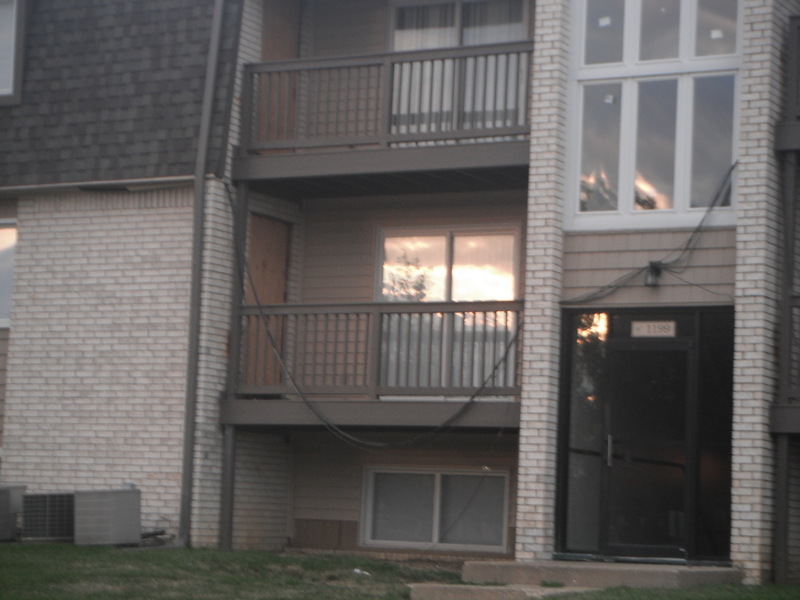 The new owners, Van Rooy Properties, closed off a number of the buildings, vacating them completely during the renovation process.  Notice that the doorways are completely boarded shut.  The renovation team also hasn’t forgotten about the rights-of-way. 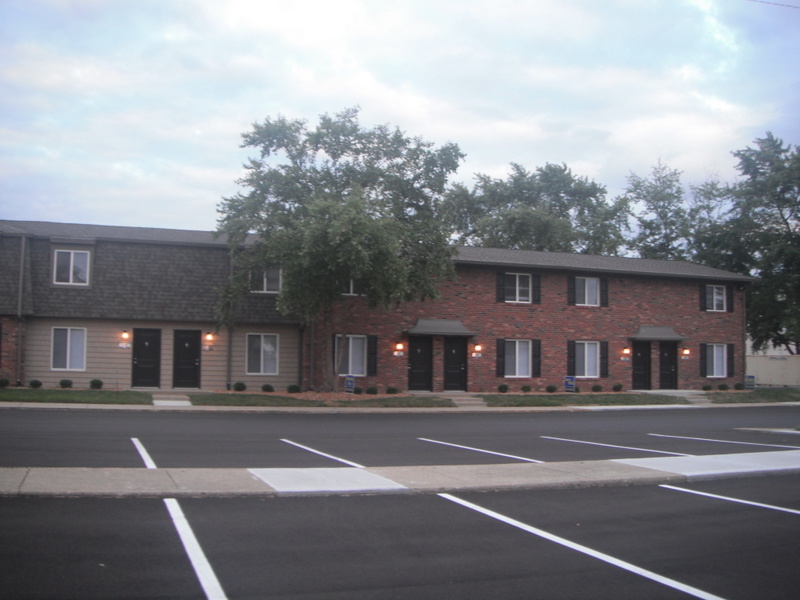 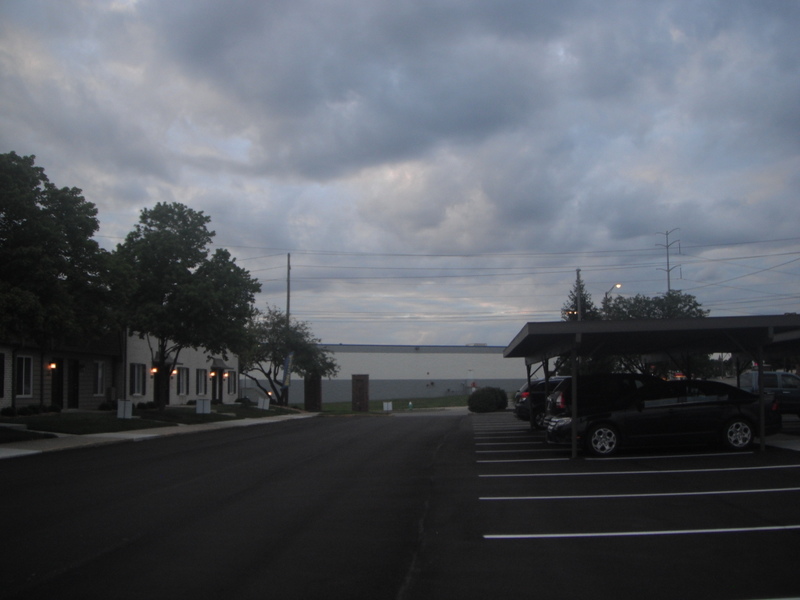 The asphalt appears to be newly resurfaced and striped.  But the best evidence that the Westminster Apartments are enjoying a thorough renovation are the buildings in which the process has not yet begun—some “before” photos. 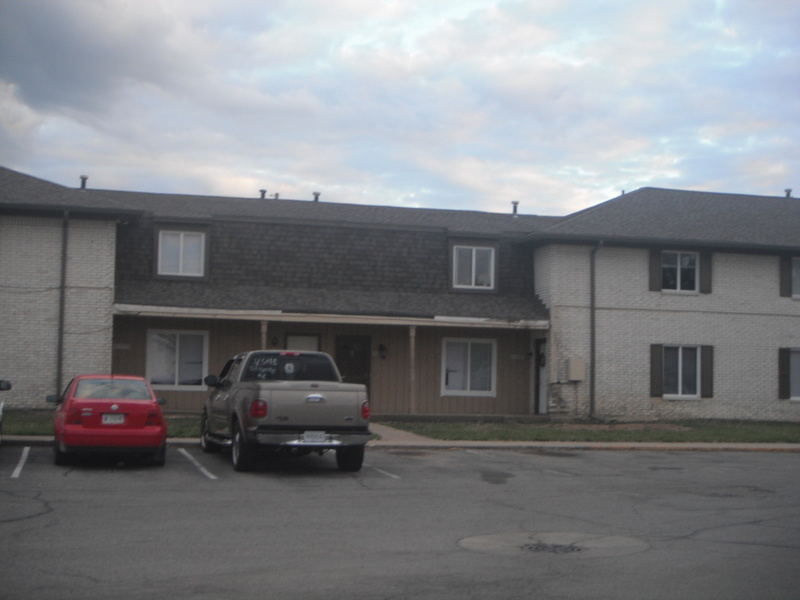 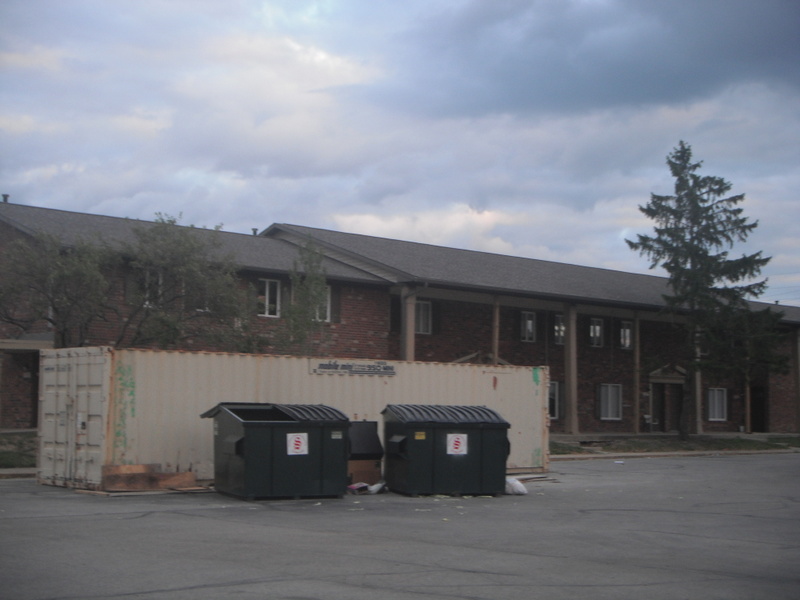 Unlandscaped, sagging gutters, peeling paint…they look just awful—worse than anything else I’ve seen on the south side of Indianapolis.  And yes, the unrenovated units still reveal those half-hearted attempts to hide the graffiti tags. 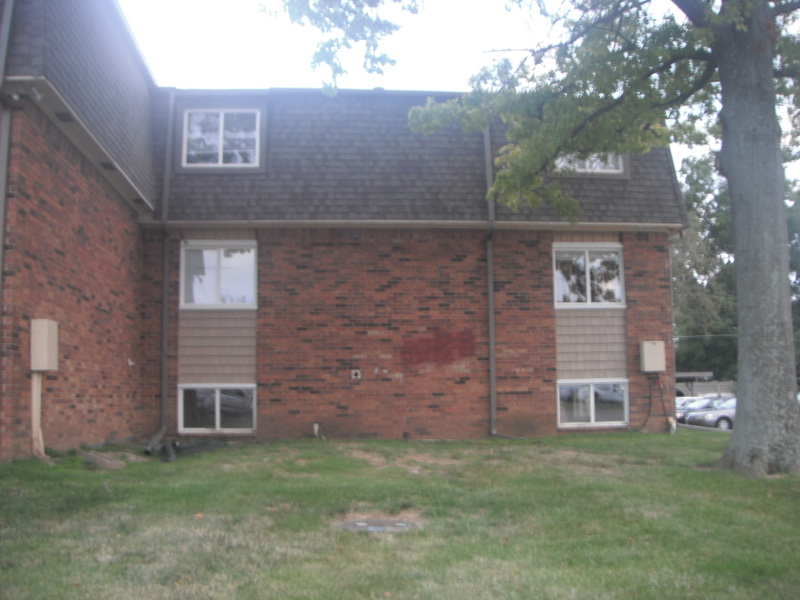 The juxtaposition of the pre- and post-renovation Westminster units should provide enough evidence that the buildings were in a sorry state, but, last November, I had my doubts that they would ever undergo a complete renovation.  The fact that Van Rooy has taken such an initiative clearly speaks well for the survivability of Westminster (though, frankly, I’m surprised the owners didn’t alter the name of the units, as frequently happens when apartment buildings change hands).  However, this initiative does not speak well for the future of equivalent rental properties in Indianapolis city limits.  While I am certain that at least some of the 1970s-era units in Indianapolis proper have undergone a renovation, I’m not aware of any in particular on this side of town.  But, just south of County Line Road, these Greenwood apartment units might benefit from enough of a shot in the arm that they once again attract middle-income tenants.  While Westminster may seem like a modest indicator, the fact remains that the property’s owners determined that its location was sufficiently desirable to invest in comprehensive uprgrades—an action I don’t anticipate seeing among Indianapolis apartments on this side of town any time soon.  In fact, the dominant demographic of the suburban-style apartments in Indy’s Perry Township (just a mile or two away from the Westminster) are Burmese immigrants, who depend on rock-bottom leasing rates.

All in all, the Westminster case study suggests that I was wrong: aging apartments in fast-growing suburbs genuinely are more likely to benefit from a renovation, while the counterparts in the primary city continue to languish.  Maybe I can explore this dichotomy again a few years from now, when another apartment complex on each side of the boundary will inevitably deteriorate to a similar condition as the Westminster pre-renovation.  But at this point, it appears that the affordable housing policies that ostensibly discourage apartment owners from renovating buildings in the old central city of a metro—the portion of the metro typically with the weakest school districts—don’t have the same impact on their suburban counterparts.  But, in another 20 years, the Westminster Apartments of Greenwood will inevitably need another renovation in order to remain viable; at that point in the not-so-distant future, shifting suburban fortunes will determine whether or not the buildings get another face-lift.

4 thoughts on “An apartment’s reversal of fortune.”