When the first one out the gate is also the last.

Several weeks ago I explored one of the most obvious consequences of the veritable implosion of the commercial airline industry.  After several years of declining enplanements and repeated consolidations of the major airlines, we will inevitably confront many manifestations of what I saw at Cleveland-Hopkins International Airport: virtually an entirely vacant concourse.  This blog article on CLE’s emptiness generated a fair amount of discussion on social media, with others pointing out similar vacancies in airports such as Cincinnati, Milwaukee, and St. Louis.  CLE might not be the greatest example, since the metro has suffered quite a bit more than the average metro: both the city and suburbs lost population over the last few decade.  Even the most superficial application of the inverse of the multiplier effect would lead to the conclusion that demand for flights out of CLE is lower than it was in 2000; after all, metro Cleveland has fewer people than it did ten to fifteen years ago.  But even metros with vigorous job/population growth have experienced a similar predicament. 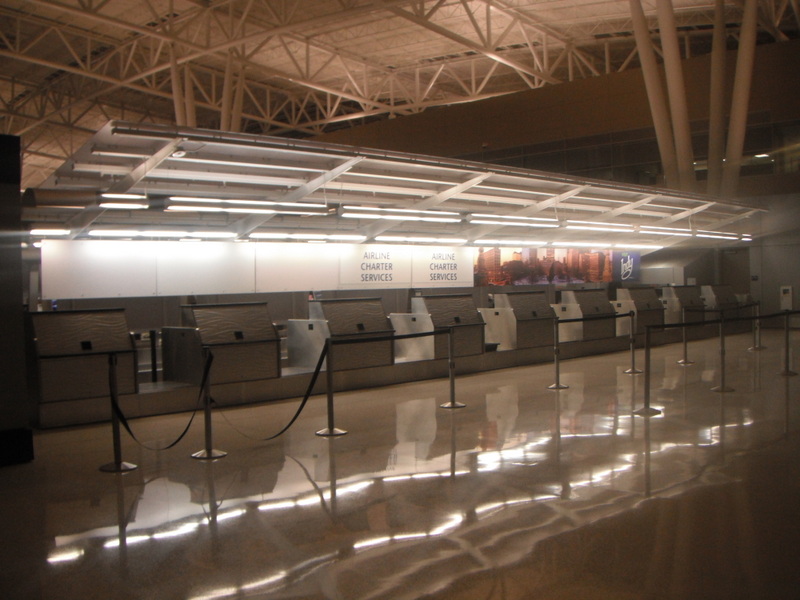 The photo above shows the first check-in/baggage claim station at Indianapolis International Airport (IND).  To the best of my memory, it was fully operative a year ago, hosting passenger services for Delta.  Now it appears almost completely empty, with the exception of “Airline Charter Services” (indicated by the perfunctory sign), but apparently that isn’t active enough to justify the self-service check-in computer kiosks that we would normally see.  The Indianapolis Airport Authority removed those when Delta left.  And this isn’t the only check-in station with vacant space: 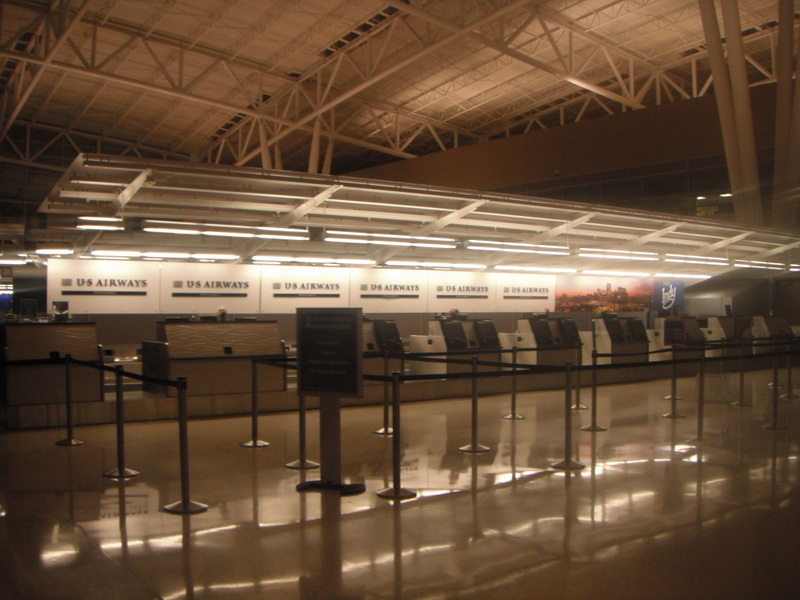 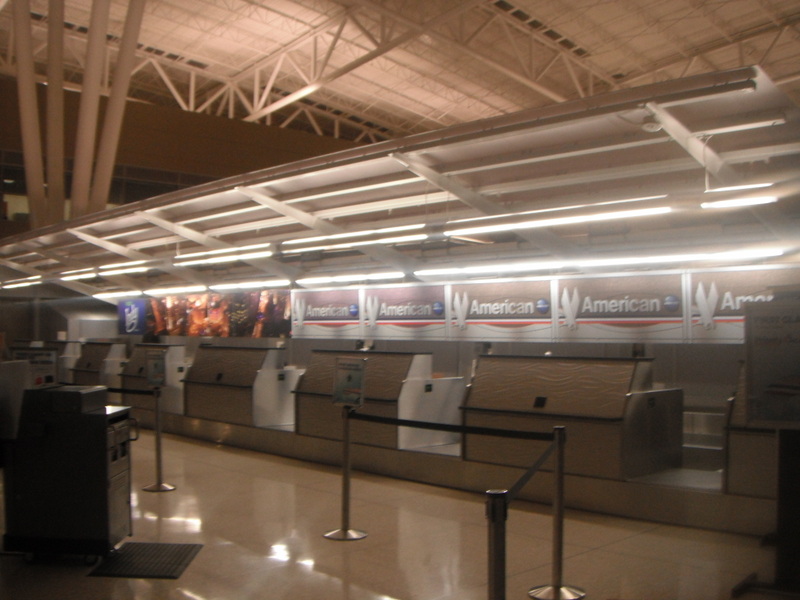 Neither US Airways nor American Airlines are using all of the check-in computers available at their respective stations, as indicated by the fact that their logos do not stretch across the back wall.  Instead, Visit Indy (formerly the Indianapolis Convention and Visitors Association) fills the remaining space with skyline and streetscape photos.

Naturally, one could rebut, “What if US Airways really is using the entire check-in counter from end to end, and Visit Indy just wanted a little room for self-promotion?”  I grant that could be true, but it wouldn’t explain why Delta’s new location doesn’t have any Visit Indy placards: 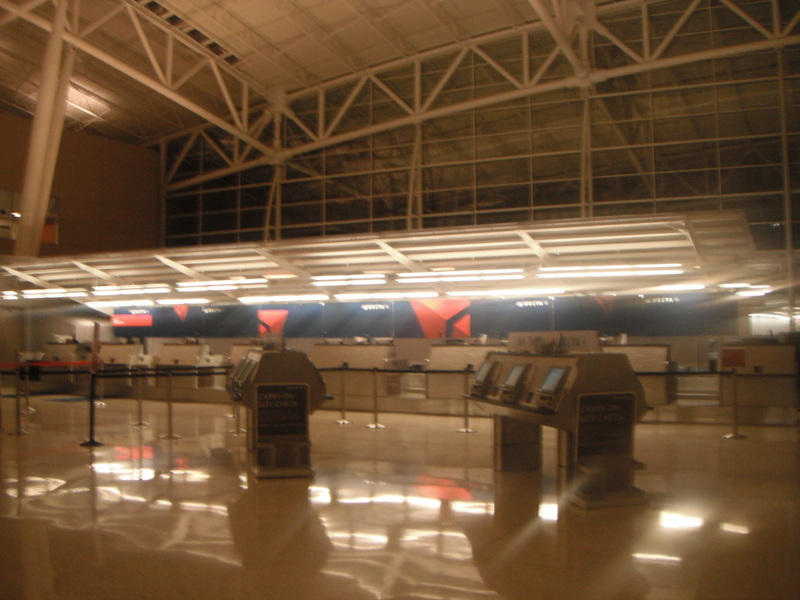 Apparently, even in its new location, Delta is using its entire counter.  Compare each of the aforementioned airlines to Frontier’s dinky space: 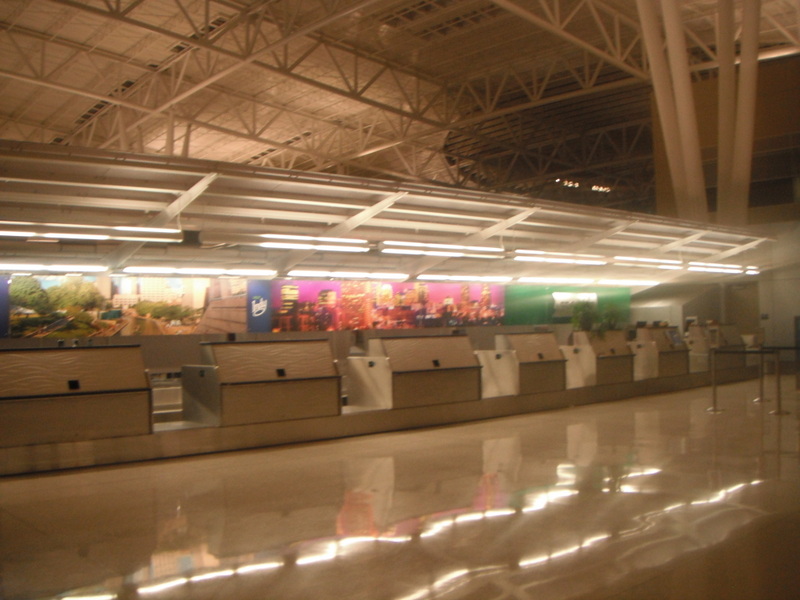 Again, I apologize for the terrible photo quality, but Frontier only occupies the section with the green placards to the right side of the photo.  The remaining 75% of that station consists of more “Visit Indy” signage—i.e., completely vacant.  Granted, Frontier Airlines is much smaller than the others.  But further contraction is on the horizon: after all, US Airways has bought out the bankrupt American, and last month a US Bankruptcy Court approved their eventual merger.

If the administrative space claimed by various airlines at IND recedes this visibly in the public sections of the airport, one can only imagine what’s taking place in the sections that are off limits to general passengers.  It is reasonable to assume that the merger between US Airways and American will significantly reduce the staffing needs by close to 50%, so the back-of-the-house sections of the airport are probably going to look much the same as the photo below. 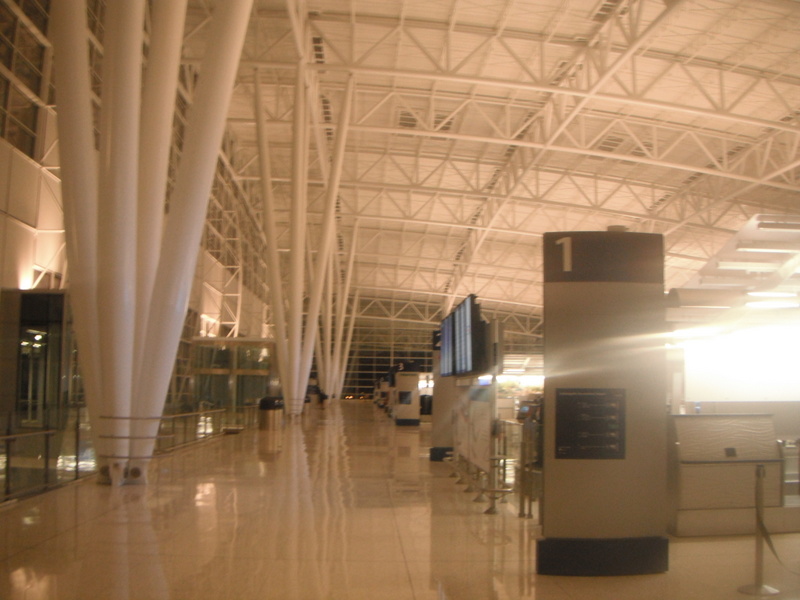 Hardly a soul arriving at the airport at 9pm on a Friday night.  Although the FAA classifies it as a medium hub, IND’s annual average of approximately 3.7 enplanements (nearly a million fewer than CLE) would by most considerations rank it as a third-tier airport, at least in terms of passenger traffic.  By the time of night that I took the photos, the majority of the airport’s storefronts are typically closed.  It’s just never a terribly busy airport.

Like Cleveland’s Hopkins International Airport, it would appear that IND has a glut of unused space that is only likely to grow after the US Airways-American merger that will eventually form the world’s largest airline.  But two other factors that distinguish IND from CLE only amplify the mismatch between our airports’ sizes and our ability to fill them.  First of all, metro Indianapolis is generally growing at a robust clip: Urbanophile blogger Aaron Renn recently pointed out that BLS metrics placed Indy at number 10 in the nation for job growth (2.84% from 2011 to 2012) after some sluggish previous years.  Cleveland’s 1.54% over the same time period ranks it at the middle of the pack among large metros. However, since the interval years are mismatched (FAA stats for 2012 aren’t available until July), I must draw from a 2010-2011 BLS report on metro job growth to form some broad-brush conclusions.  Incidentally, a cross-referencing between BLS employment growth and FAA enplanements from 2010 to 2011 reveals little to no correlation between job growth and shifts in passenger traffic.  For example, Louis Armstrong New Orleans International Airport (MSY) enjoyed a solid growth in enplanements of 4.07% from 2010 to 2011, even though the metro’s job growth has been negative during that time frame.  Meanwhile, CLE declined in enplanements at about the same rate (-4.14%), yet metro Cleveland’s job growth, though modest, was positive.  Apparently, any change in metropolitan employment numbers offers no indication of the respective airport’s vitality.

The other factor distinguishing IND from CLE—and virtually all other major American airports for that matter—is that IND is operating out of a brand new terminal.  The Colonel H. Weir Cook Terminal finished construction in November 2008—the first designed and built in the US since the September 11, 2001 attacks.  While few major airports are taking such radical steps as IND did several years ago, the New York Times reported last year that many of the largest airports are undergoing significant renovations or expansions, particularly at the major international gateways, in order to keep up with the amenities and services offered at the most prominent overseas competitors.

An article as facile as this could hardly justify a critique on airport renovations at LAX, ATL, or JFK—after all, none of the second- and third-tier airports scrutinized in this article are facing the sort of international passenger traffic as the big guys.  But the emptiness at the smaller airports doesn’t auger well for what might transpire at the big ones; after all, even though Atlanta and JFK boast an array of other airlines that will buffer the impact of the US Airways-American merger, this latest absorption of an airline is still likely to free up at least a few baggage claim terminals, gates, and office space.  The ongoing trends in airline mergers and diminished passenger travel may not have an impact on infrastructural improvements taking place at airports, but it should seriously call into question the need for any major expansions.  And what airport authority would sensibly build a brand new terminal in these times of dearth?!  Although airport construction does not depend on taxpayer money—the local authorities finance capital improvements through the revenue they generate in passenger fees—the leadership of these businesses must account for their decisions through as consistent profitability as possible.  And it’s hard to imagine airports like CLE, IND, or MSY being able to justify any further upgrades, when their terminals have devolved into echo chambers that host a floundering industry.

11 thoughts on “When the first one out the gate is also the last.”