REWIND: It may take a village, but what if the village is the taker?

My latest is now posted at New Geography.  Truth be told, it’s not exactly a brand new article; I originally featured it here last December, as an exploration of municipalities (mostly in Ohio) that use speed traps as a primary means of generating revenue. Since then, I have significantly revised the final analysis, including material that focuses on the broader implications of “speed trap towns”, along with a few additional photographs.  The article that features in New Geography is slightly abridged, so here at American Dirt I have attached the full-length version seen below, which includes all the text featured on New Geography plus a bit more vigorous analysis.  The second half of this article, in particular, differs considerably from the original version that I featured here last December.

With few exceptions, the typical Metropolitan Statistical Area over 100,000 people contains at least one additional incorporated municipality beyond the core city.  The larger ones—those over half million—typically include several municipalities, while the largest MSAs may contain hundreds.  Like the variegated colors in a mosaic, the incorporated communities in an MSA often differ greatly from one another, and not just because they comprise discrete, bounded territories.  Ideally, each municipality offers a distinct approach to self-governance that directly reflects the wills of its electorates. Thus, we recognize core differences in the appearance of infrastructure between two adjacent municipalities: street signs, lighting, or even paving surfaces, let alone their financing.  I observed this in a recent blog post focusing upon a road that formed the boundary between two Cleveland suburbs.
Meanwhile, most constituents will assess the aptitude of their officials through two basic means: the election process in the short term, and maintaining a residence in the municipality over the long term, which collectively provide the incentive for a mayoral administration to perform its duties capably.  If public servants want to keep their jobs, they will carry out the will of the electorate, while a well-managed city is far more likely to retain its tax base than one that is not.
But what happens when a town’s leadership chooses an ethically or legally dubious management practice?  The suburb of East Cleveland has acquired an infelicitous reputation over the years. 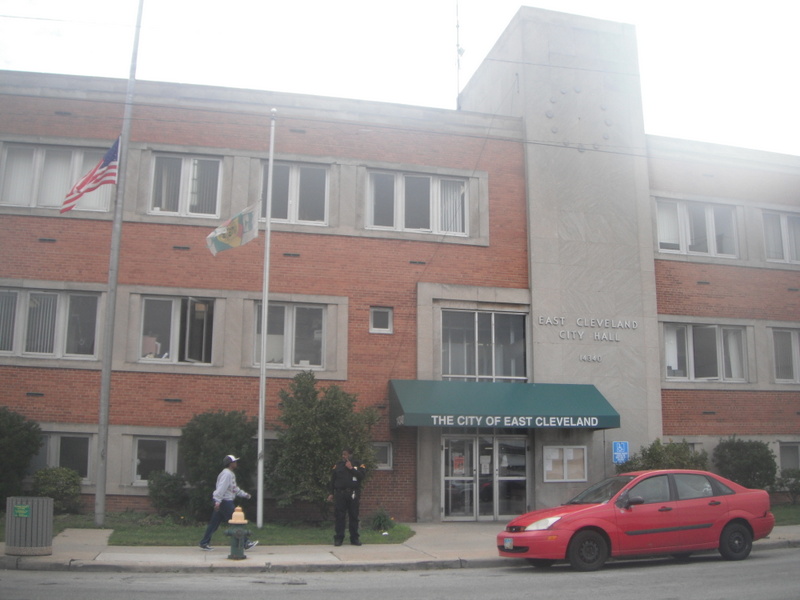 It abuts the core city to its west and the north, and in terms of the physical appearance, the boundary between the two is indistinct.  A century ago, the City of Cleveland unsuccessfully attempted to annex East Cleveland on two occasions.
These days, Cleveland is unlikely to perceive its eastern neighbor as much of a catch.  East Cleveland fell on hard times during the deindustrialization that took place throughout the Cuyahoga Valley: since 1970, it has lost more than half of its population.  What was once a predominantly white suburb is now almost exclusively African American, with nearly 40% of the 2010 population falling below the poverty level.
Not surprisingly, East Cleveland’s impecunious residents and depressed real estate do not contribute a tax base by which the City can provide fundamental services.  So what does it do? 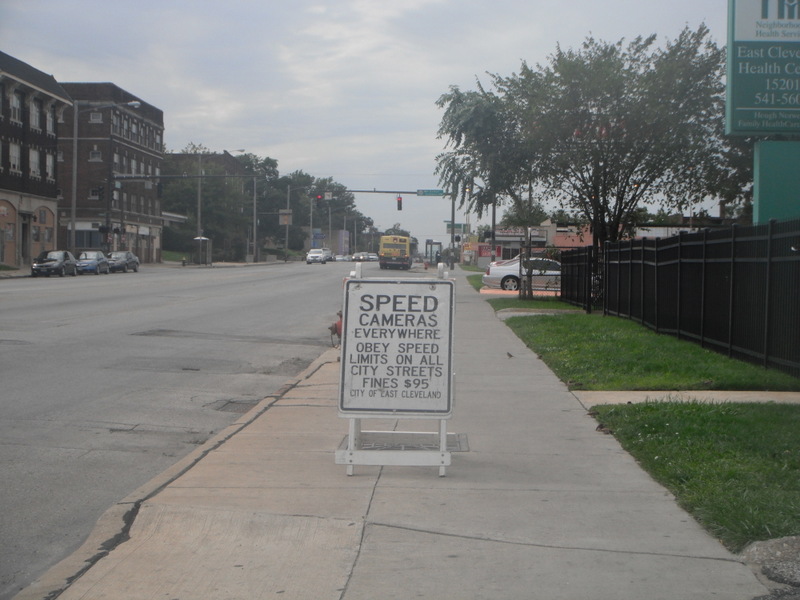 It shifts the burden to motorists by saddling them with hefty speeding tickets.  While visiting Cleveland, friends had warned me that the 2.5-mile stretch of Euclid Avenue that passes through East Cleveland was a fierce speed trap—I shouldn’t go even a few miles per hour over the limit.  Now this sign on the sidewalk confirms it.  The City probably decided to install cameras to prevent law enforcement officers from squandering time on petty infractions, especially considering East Cleveland’s high rate of violent crime. A few blocks away, an unusually large sign announces the approaching school zone, which no doubt has even more onerous speeding restrictions—and steeper fines. 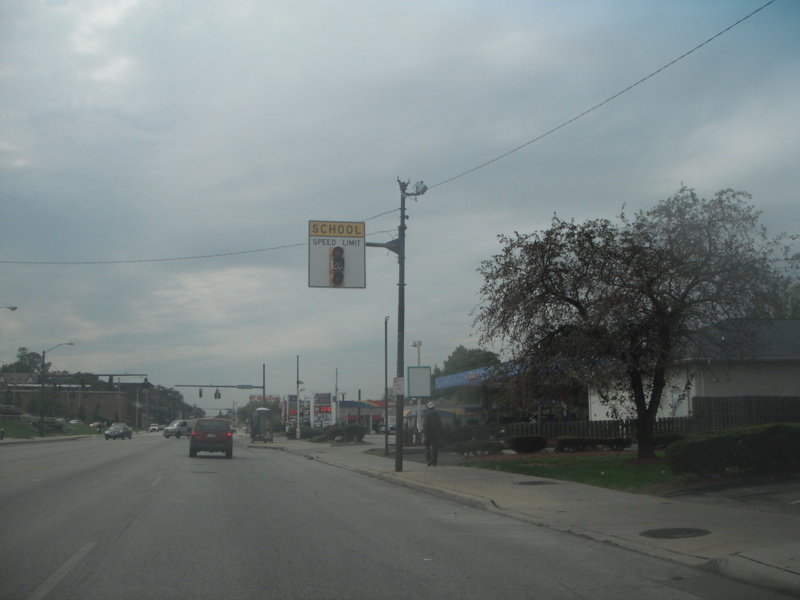 At least the City of East Cleveland is candid about its method of generating revenue.  The same couldn’t be said about New Rome, outside Columbus, Ohio.  This tiny village comprised only about nine city blocks (approximately twelve acres), and even at its peak, no more than 150 people called it home; the 2000 Census estimated its population at 60.  It would probably go completely ignored if it weren’t for a four-block stretch of U.S. 40 (West Broad Street in Columbus) that fell within the corporate limits.  This twilight photo captures the essence of New Rome’s claim to U.S. 40 well enough. 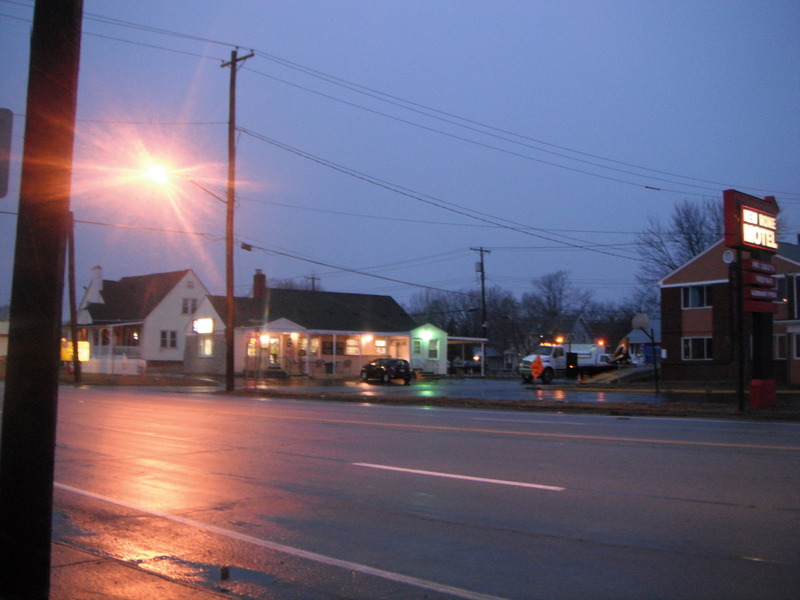 And this photo in the opposite direction (looking away from Broad Street) shows the commercial/residential heart of New Rome. 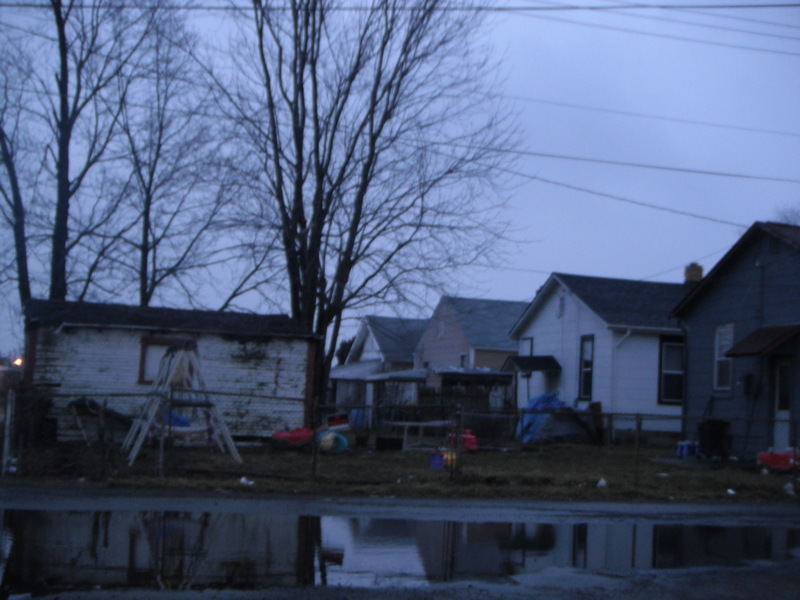 Considering how hard it is to imagine that the village ever claimed more than a few houses, apartments, and small businesses, one can only marvel under how New Rome could justify its incorporation back in 1947.  But it did, and that 1000-foot segment of US 40 clearly fell within its municipal boundaries, and it was there that the speed limit dropped from 45 mph to 35.  Another trap.
The New Rome Police Department had every right to issue $90 citations to motorists going 42 mph within this speed zone.  But, according to an April 2003 issue of Car and Driver magazine, speeding tickets only accounted for about 12% of New Rome’s citations.  The remainder?  Fines for cracked or excessively tinted windshields, dirt on the license plate, chipped taillights, faulty mufflers, tailgating, and driving too slowly, among others.  Officers asked stopped motorists where they work, and failure to pay in time could result in an arrest at the workplace.  This village of a dozen ramshackle houses, three apartment buildings, and a handful of small businesses earned nearly all its revenue (nearly $400,000) from traffic tickets.  Since the village had no other real public agencies, all of this money paid for the police force—an operation that existed to fund itself and the village council.
New Rome’s speed trap earned it a far more insidious reputation than East Cleveland.  Motorists used alternate routes in order to avoid the gauntlet, traveling through residential neighborhoods unequipped to handle the traffic.  Businesses in the area acknowledged their struggles as people consciously circumvented New Rome.  A few neighbors eventually grew so frustrated that they launched the website New Rome Sucks in order to let more people voice their Tales of Woe.  Further research on the village’s operations revealed that the speed trap was just the tip of a corrupt iceberg.  Village leaders inappropriately used a 1996 federal grant intended to fight burglaries and vandalism to fund yet more traffic enforcement.  This police force at times employed as many as 14 people, almost one quarter of the 2000 population.  Furthermore, past audits revealed embezzlement by various council members, virtually all of whom were related to one another.  And the State Highway Department claimed that the Village’s sudden speed limit drop on U.S. 40 was unjustified.
At last, in 2002, a neighboring business owner, angered by New Rome’s influence, moved to an apartment building in town and successfully ran for mayor, winning with six votes against zero.  However, the council refused to recognize his victory; one member called him a carpetbagger.  This controversy attracted the attention of the Franklin County Prosecutor and Ohio Attorney General Jim Petro, who determined that, after decades of incompetent management, New Rome should be abolished.  By the end of the year, Petro convinced the Ohio General Assembly to pass a law allowing the State to seek dissolution of a village under 150 people if the State Auditor found that it provided few public services and demonstrated a pattern of wrongdoing.  When New Rome officials successfully challenged the statute as contrary to the home rule provisions in the Ohio Constitution, a judge ruled in July of 2004 that, since the electorate had allowed key offices such as village council to remain vacant since 1979, the village had effectively dissolved itself.  By September of that year, the Village of New Rome was irrevocably absorbed into Prairie Township of Franklin County, Ohio.
The suburb of East Cleveland is a “Community of Strict Enforcement” that may not have high road fatalities, but city’s socioeconomics give it few other options to generate the revenue it needs.  I have no doubt that the placard on the sidewalk owes its existence to the debacle that brought about the demise of New Rome.  In most municipalities, good governance is a selling point.  However, New Rome’s malfeasance was unequivocally a reflection of the will of its constituents: they got the racket that an apparent majority of them wanted.  And eventually the village forfeited its very existence.
While human vagaries organized into a collective force could realistically allow the emergence of New Rome anywhere in the country, it is worth questioning whether that municipal incorporation structure in Ohio—and, furthermore, other Midwestern/Northeastern states—particularly abets the process.  Tiny municipalities exist everywhere.  But they seem particularly prevalent in the industrial heartland.  Cleveland’s Cuyahoga County has 57 incorporated municipalities; Columbus’ Franklin County has 25; Cincinnati’s Hamilton County has 38.  Most states to Ohio’s northeast are almost completely incorporated: William Penn mandated this characteristic in his original charter for Pennsylvania; New Jersey is 99% incorporated. It is not uncommon to find boroughs as small as New Rome in these two states; the Philadelphia suburb of Millbourne measures only .07 square miles.  Conversely, southern states are more likely to opt for either expanses of unincorporated urbanized land (which characterizes the vast New Orleans suburb of Metairie) or mega-municipalities, such as the “town” of Gilbert outside Phoenix, with a population over 200,000.
This broad-brush distinction between North and South may not yield any further conclusions, but even laypersons know these days that majorities of shrinking cities—and towns, villages, boroughs, and townships—span the Northeast and Midwest.  The home rule provision, coupled with a small population, allows for a disproportionate amount of self-actualization through legislation…for better or worse.  Cleveland’s most prosperous microsuburbs can wield it effectively to stem the erosion of their tax base; I have also noted another tiny Cleveland suburb of Linndale that transforms its stretch of I-71 into a speed zone; so far the municipality has defended its right to police the interstate under the constitution’s Home Rule Provisions.  And the affluent Bratenahl (pop. 1150), hemmed in by Lake Erie on one side and the largely impoverished City of Cleveland on the other three.  Meanwhile, just a mile from Bratenahl sits East Cleveland, in perpetual struggle.  At the very least, the Rust Belt states must carefully weigh the benefits of entitling tiny population through geographically refined control, versus the sociological and fiduciary costs of excessive density of politicization.  Otherwise, the only way many communities in a metropolitan mosaic will ever paint themselves out of the red is through surreptitious speed traps.

PrevMain Street geniuses and the chain of fools.
Nordstrom brainstorming.Next