When a “road diet” removes not just the fat but the bone.

Long perceived as one of the most automobile-dependent major cities in the country, Houston has made considerable strides in recent years toward diversifying its transportation options. The METRORail line, first proposed (and rejected) in 1983, took decades to develop, largely due to persistent political opposition.  However, with a 2001 groundbreaking, the 7.5-mile line, spanning from the University of Houston’s downtown campus toward Fannin South, opened on the first of the year in 2004, relieving Houston of its dubious distinction of being the largest city in America lacking a rail system.

The double-tracked, standard-gauge line operates using infrastructure that adheres to most contemporary light-rail standards; the entire route runs on city streets.  For downtown visitors, the most widely visible segment of the route stretches the full downtown length of Main Street, one of the primary north-south corridors bisecting the innermost of Houston’s three-tiered interstate loops.  By most observations, the physical system appears as slickly contemporary one would expect given its age—at least in consideration of this country’s extremely modest standards for mass transit.

To elaborate further on the trains themselves would be disingenuous of me.  During my latest, brief visit to the city, I confess that I didn’t even ride the line.  But I did walk much of its length through downtown, and I was particularly intrigued by the method by which engineers utilized part of the old vehicular right-of-way along Main Street for the at-grade placement of the track.  The photo below, from just south of the intersection with Dallas Street and looking northward, offers a good example: 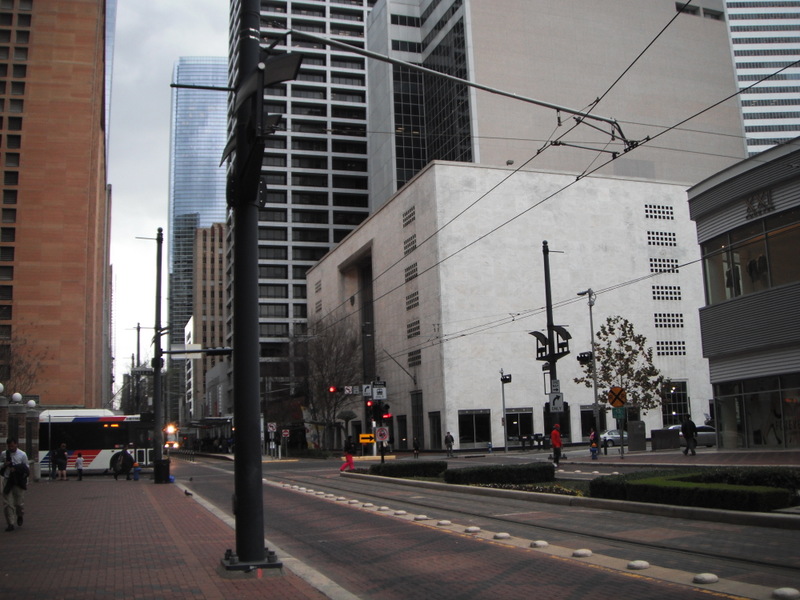 I was standing on the side of the street that hosts southbound traffic, and the narrow lane next to me features minimal separation between pedestrian, vehicle, and train.  Small bollards separate the rail from the traffic, and a minor grade change distinguishes the sidewalk.  There’s nothing wrong with this per se, since it allows the ROWs for vehicles and rail to cross one another at conventional intersections with no inherent impingement upon their respective levels of service.  But check the other side of the street, where a few pedestrians are standing in the distance: it hosts the train platforms where the vehicular lane would otherwise be, then transitions directly into a generous sidewalk.  This condition means is that, although the METRORail clearly is bidirectional, Main Street is only one-way southbound.

But is it?  Here’s a view in the opposite direction, looking southward toward Main Street’s intersection with Polk Street, the next block down. 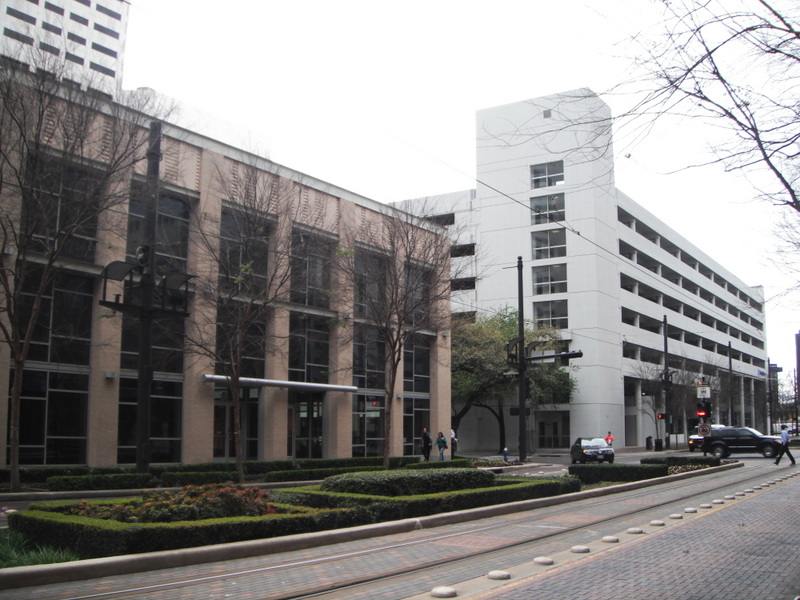 The pedestrians enjoy a spacious walking environment on the opposite side of the street, complete with generous landscaping.  But on the far right of the photograph, south of the intersection with Polk, notice a vehicle (partially obscured by a traffic light) stopped at the intersection, resting on the ROW of Main Street—northbound.  Though my photo does not indicate it, the northbound cars can travel on the block of Main Street from between Polk and Dallas, but north of Dallas, it becomes one-way southbound.

After crossing to the opposite side of Main Street and continuing northward, I discovered that the dedicated ROW for vehicles reveals further eccentricities in the layout. 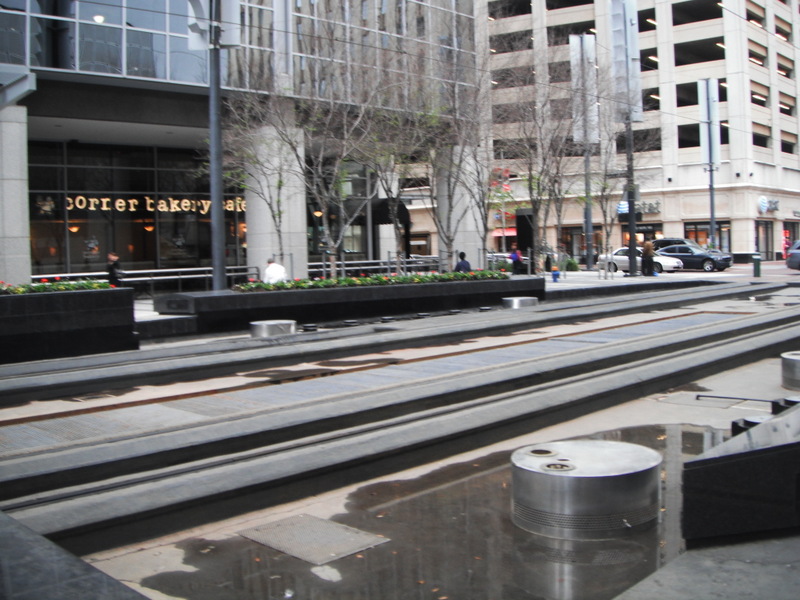 Midway between Lamar Street and McKinney Street, the ROW for the light rail dominates the overall streetscape, and the tracks themselves merge with a reflecting pool, which in warmer weather (when the pool is full) looks like this.  Here’s a more direct view of the Main Street streetscape looking southward, at a point just south of its intersection with McKinney. 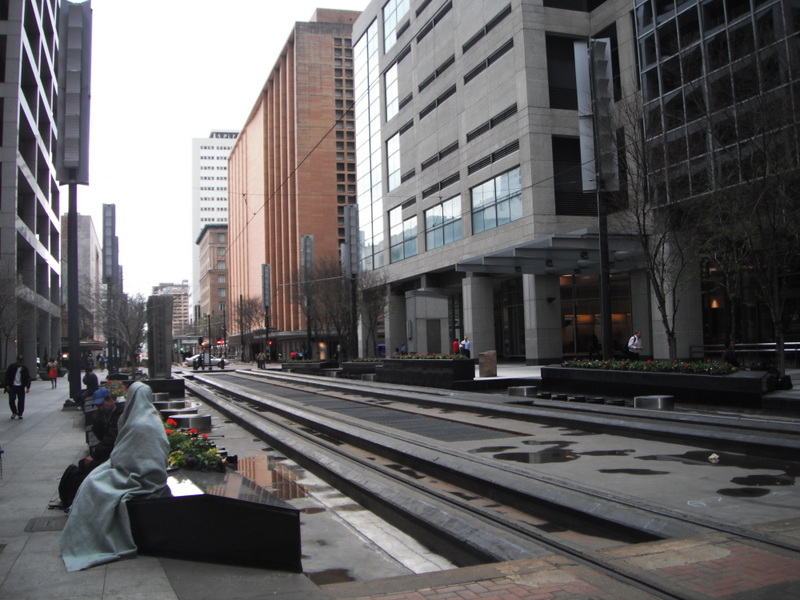 As the photograph proves, Main Street here is a complete pedestrian zone on both sides of the street.  But, on the north side of McKinney, vehicular access resumes. 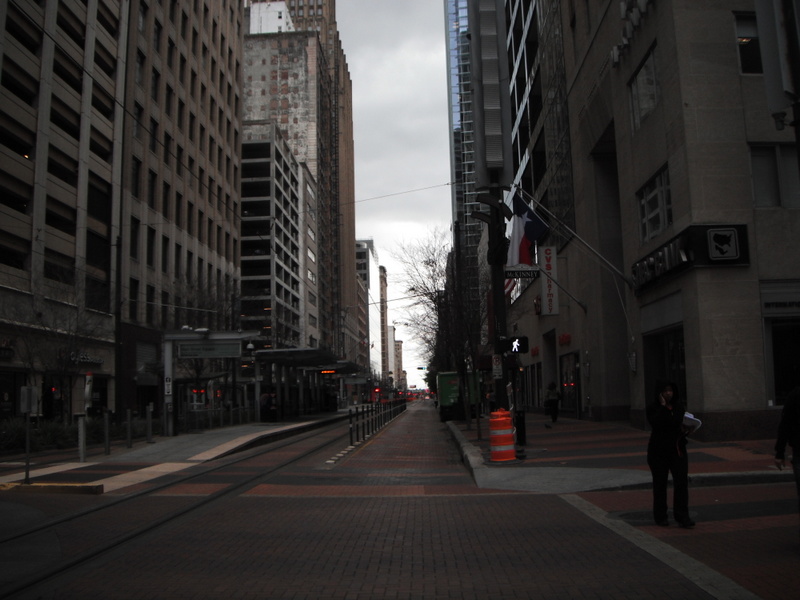 The grade change between sidewalk and street, coupled with the bollards separating the cartway from the rail, indicates another narrow lane for vehicular access.  But this time, Main Street is only open to northbound traffic, while the METRORail platforms occupy the former southbound ROW.  A block further, north of Main Street’s intersection with Walker Street, the division of roadway uses changes yet again—back to a street with rights-of-way in both directions.  North of Texas Avenue, in the Main Street/Market Square Historic District (and once again on the southbound side of the street), the streetscape looks like this: 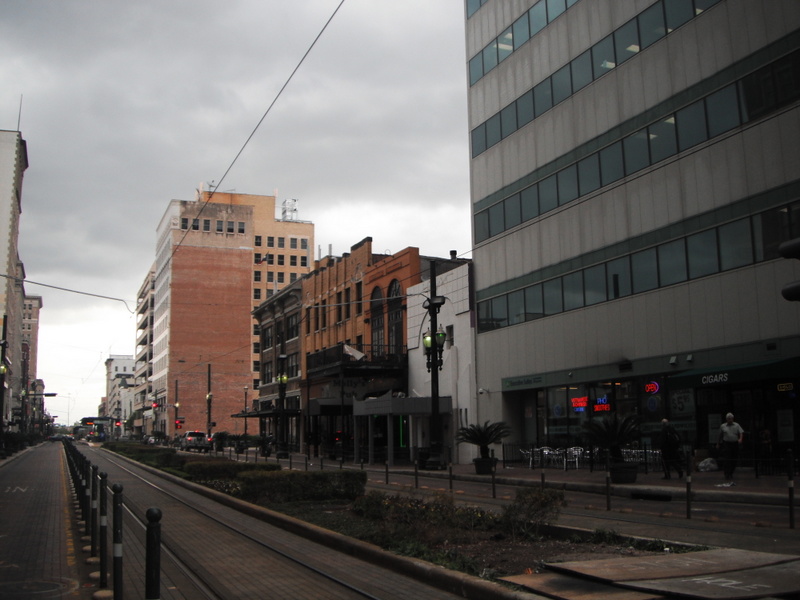 While Main Street continues to offer bi-directional vehicular travel all the way to its northern terminus at the downtown campus of the University of Houston (and beyond), it still pulls a few sneaky tricks on the unsuspecting driver.  Looking laterally at the Main Street bridge over the Buffalo Bayou, the configuration is fairly straightforward: 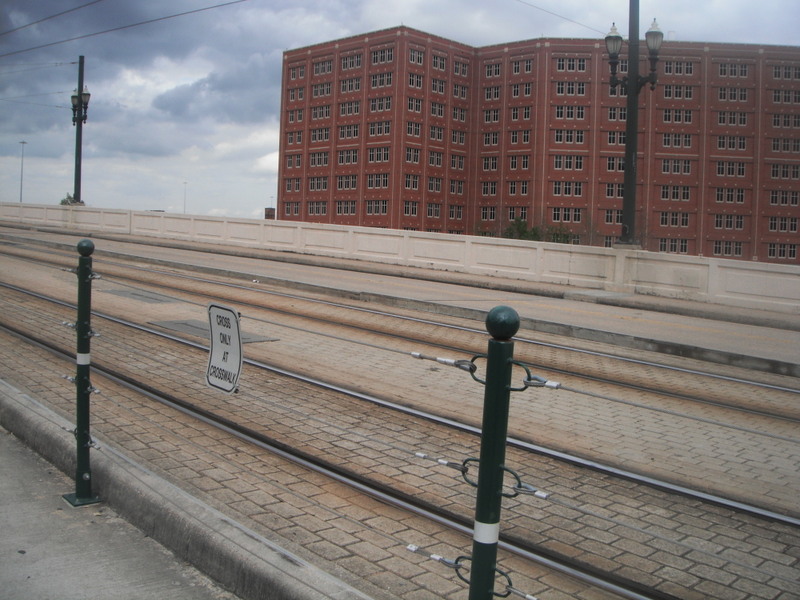 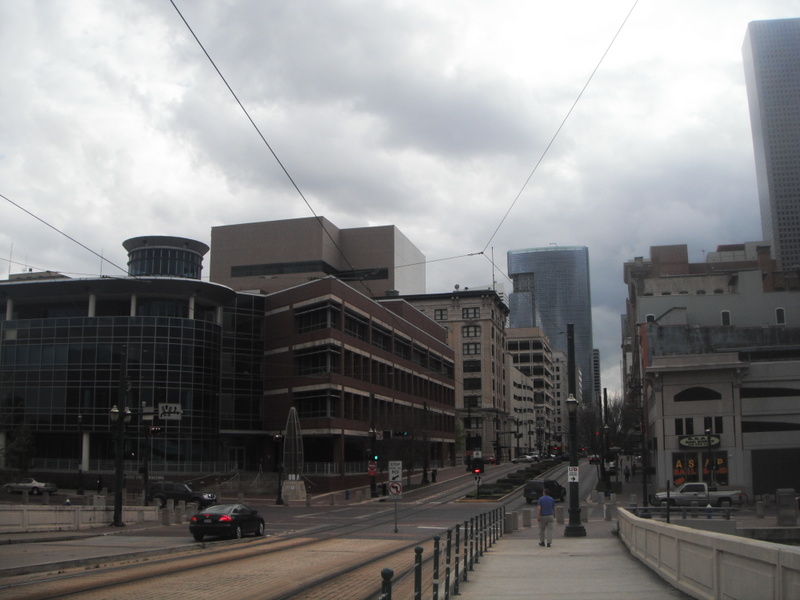 Notice the dark vehicle stopped in the foreground (near the left of the photo).  It is headed southward, and both sets of tracks are to its right.  But, on the other side of the intersection, the same southbound lane continues on the other side of each of the tracks (where an SUV is turning, partially blocked by a man in a blue shirt).  So, as Main Street passes through the heart of downtown, its order is as such: northbound vehicle, northbound train, southbound vehicle, southbound train.  And if the vehicle on the north side of this intersection (with Commerce Street) were to continue straight ahead, it would directly confront traffic.  It has to veer sharply right, then veer left again almost immediately in order to continue on southbound Main Street.

If that sounds confusing based on my description, you can imagine what it would be like to a driver unfamiliar with the city.  In fact, records show that, despite a year-long education campaign prior to the METRORail’s opening, the line’s crash record measured at over 20 times the national average per track mile, helping the system to earn the nickname of “Wham Bam Tram” among mass transits most ardent opponents.  It would be unfair for me to delve any further into the politics that had long delayed the development of this train, and I have to measure my words even on the critique of the infrastructure, since my knowledge does not extend much beyond the research I have included in this essay.  But the majority of people navigating through Houston’s downtown, by foot, wheel, or rail, will form judgments empirically.  Bearing in mind how few people possess enough transportation engineering wherewithal, the executive decision on how to thread this bidirectional rail line across Main Street seems baffling.  If my photos didn’t get the job done, perhaps this Google Map can better demonstrate the confusion. 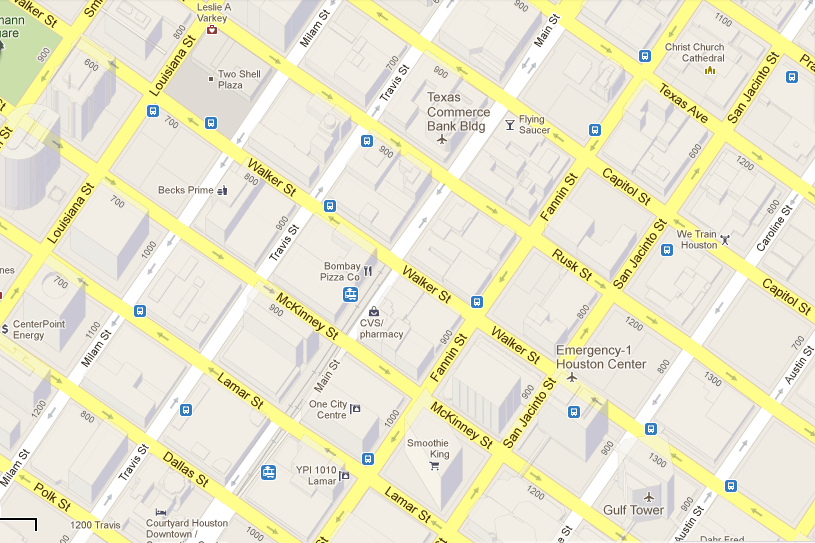 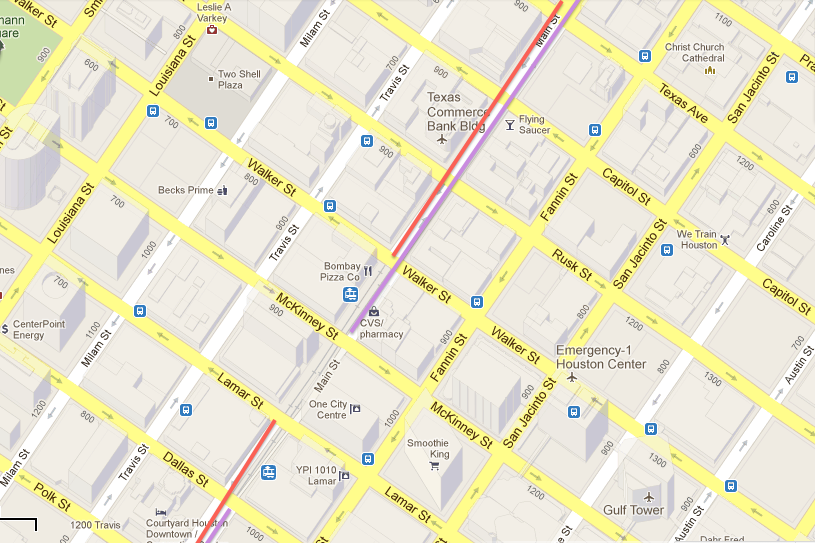 Thus, between Dallas Street and Walker Street, three blocks of Main Street offer a mix of vehicular traffic patterns: one-way north, one-way south, or none (pedestrian and train only), all on a street which through the remainder of its downtown trajectory is two-way.

This ROW strategy effectively diffuses the primacy of this north-south artery in the city’s downtown.  How long would it take even for locals to grow accustomed to these quirks?  While most of the research on METRORail collisions over the years reveals that they have been due to error of private vehicle drivers (not the train operators), it is impossible to know whether the profound problem the system has had is due to a motorist culture unacquainted with maneuvering around trains (as many have understandably asserted) or if the system itself is inherently confusing.  While Houston is hardly the first city in America to remove vehicular rights-of-way in order to provide at-grade light rail, its choice of which lanes to remove seems particularly capricious.  The problem only appears more salient when one views Main Street in the full context of its downtown surroundings: 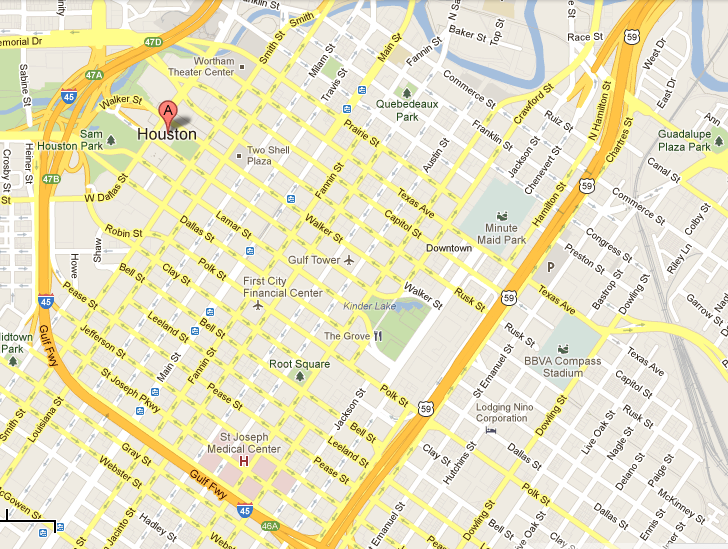 It’s not particularly easy to tell, but within the general downtown area (framed on three sides by limited access highways and by Buffalo Bayou to the north), the city has virtually no other two-way streets.  Parallel to Main, only Bagby Street on the far west and, to the east, Avenida de las Americas and a segment of Jackson Street share this distinction.  Perpendicular to Main, only part of Commerce Street along Buffalo Bayou is two-way.  None of these streets completely transects downtown.  No streets in the central portion of Houston’s approximately 200-block downtown—aside from Main Street—in are two-way.  Thus, the city’s engineers have ostensibly gelded the only two-way axis, all during a mere three-block segment.

Perhaps the road’s width varied from block to block, and this method proved the only way to introduce light rail and the requisite downtown embarkation platforms without sacrificing critical pedestrian space.  Perhaps the goal (particularly on the vehicle-free Lamar-to-McKinney block) was to foster the pedestrian mall culture prominent throughout European cities, and that the presence of light rail would adequately substitute for the absence of cars.  Perhaps it was purely due to the lobbying of the property owners of the skyscrapers that front these segments of Main Street.  I’m hardly one to denigrate any city for finding ways to calm traffic in what should be the pedestrian-rich downtown.  And frankly, if a city is intending to integrate an urban rail transit system at street level, superfluous car lanes are usually the first that should go. Regardless of the intents, after nearly ten years in operation, the foot traffic along Main Street on a typical weekday afternoon in the early spring scarcely portends an up-and-coming commercial, retail, or entertainment corridor.  It has moments of discernible energy, but large expanses of vacant real estate linger.

Regardless of the propensity for collisions, few outside of the diehard partisans are condemning METRORail’s ability to meet long-term transit goals.  Overall usage has generally met or exceeded expectations: the line achieved its 75 millionth boarding in December of 2010, four years ahead of schedule.  And, after the completion of a 5.3-mile extension of the existing line, coupled with the introduction of two new lines, the Metropolitan Transit Authority of Harris County will have an identifiable, multi-axis system.  At that point in time (estimated 2015), the system will start adopting colors for the routes (red, purple, green) and distinct names to the new stations, as recommended by the public.  Superficial as they seem, these naming strategies are helpful in asserting the rail network’s identity as a uniform brand, which in turn can only escalate its aggregate visibility.  And visibility may remain the single strongest argument favoring a fixed-rail system over something more malleable like buses: the permanent presence of rails and catenaries offers a bold signal announcing TRANSIT for even the most unacquainted. (This explains why visitors to a large city will always gravitate toward both above and underground train systems before they will seek out a bus route.)  Clean, lucid visuals may in turn help to bolster passenger use even further on the METRORail (future Red Line), helping to downplay the symbolic clutter fostered by those shifting rights-of-way.

PrevA modest new Gateway Arch.
Salvaging St. Louis, Part I: the macro influences that keep it afloat, if not flourishing.Next