Vesuvius erupts in the prairie.

In the world’s most overbuilt nation for retail space, any outside influence can induce an infinitesimal change that nonetheless completely transforms the landscape for commerce.  The retailers who continue to succeed in this economy—particularly impressive given the growing portent of online shopping’s eventual dominance—help shed light on what type of structures/milieus they are seeking to house the goods that they sell.  White-collar workers are broadly familiar with the Class A/B/C ranking of office space, but what if we applied this system to retail?  My suspicion is that, based on occupancy levels and the tenant mix, the average American metro area has about 10% at class A, 40% at class B, and a whopping 50% at Class C—the low-end structures that desperately snatch up any tenant they can get.  In relation to the demand, the supply of retail in this country is outrageous, and there’s no sign of this supply flagging, since developers continue to build new strip malls on raw land.

At any rate, retailers enjoy the privilege of calling the shots in a national market that suffers from this plethora of supply.  And it allows for an anthropological study of commercial epochs, by exhuming the remains from within shopping sarcophagi from yesteryear.  Take this one, for example: 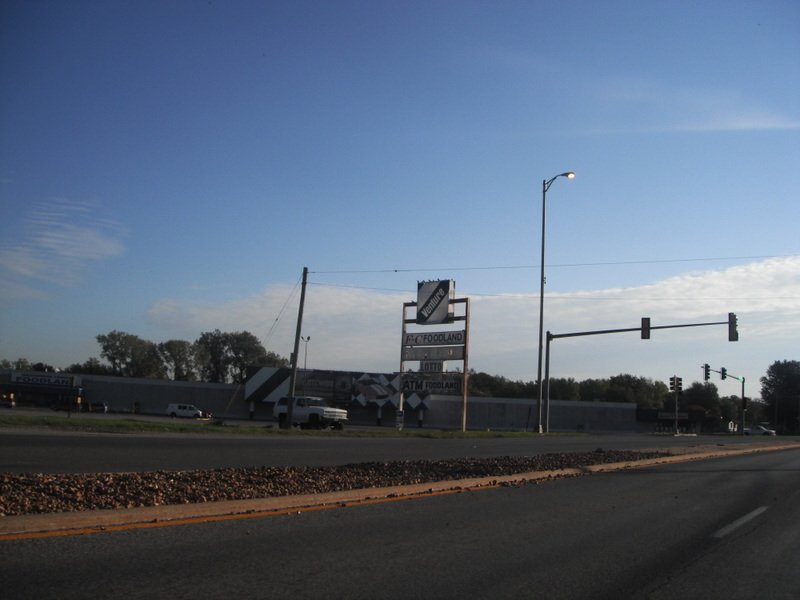 The name “Venture” and its black-and-white logo are unlikely to be familiar to anyone outside of the Lower Midwest, or anyone who has not yet graduated high school.  But for the rest of us, it was a prominent name in the mid-1990s.  Based out of O’Fallon, Missouri (a suburb of St. Louis), Venture was a discount all-purpose store trying to gain a national foothold at the same time that Wal-Marts and Targets were proliferating wildly.  Needless to say, Venture lost to those two giants and filed Chapter 11 bankruptcy in early 1998, then closed all its stores later that year.

My memory of Venture depends on its fiercely confident advertising campaign launched on Indianapolis a few years prior; I can still remember the jingle to the radio/TV commercials.  While it positioned itself as the new challenger to Target (much more than Wal-Mart), I never got the feeling it inspired a lot of confidence.  I’m pretty certain it choked in Indy a few years before it folded completely.  If it survived even four years in my hometown’s market, I’d be surprised.

The sign from the above photo comes from an old shopping center in Fairmont City, Illinois, a small, incorporated stretch of land between two larger and more prominent St. Louis suburbs of East St. Louis and Collinsville.  By this point, many Americans know of the formidable struggles East St. Louis has endured over the years.  Burgeoning in population through industrial and railroad growth after the Civil War, the city achieved its population peak (like so many in the Rust Belt) of 82,000 at around 1950.  It even earned All-American City recognition in 1959.  But de-industrialization and the diminishing importance of freight rail hit the city hard, instigating a precipitous population loss that continues to this day. 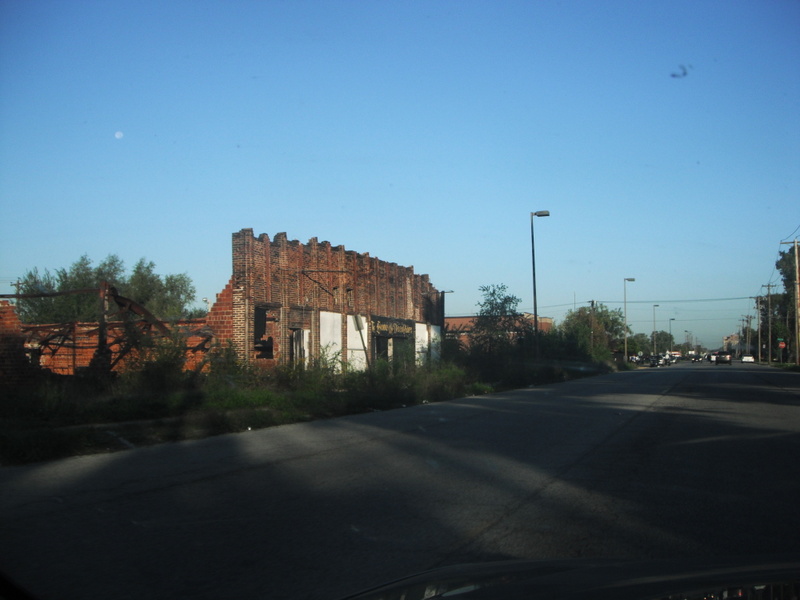 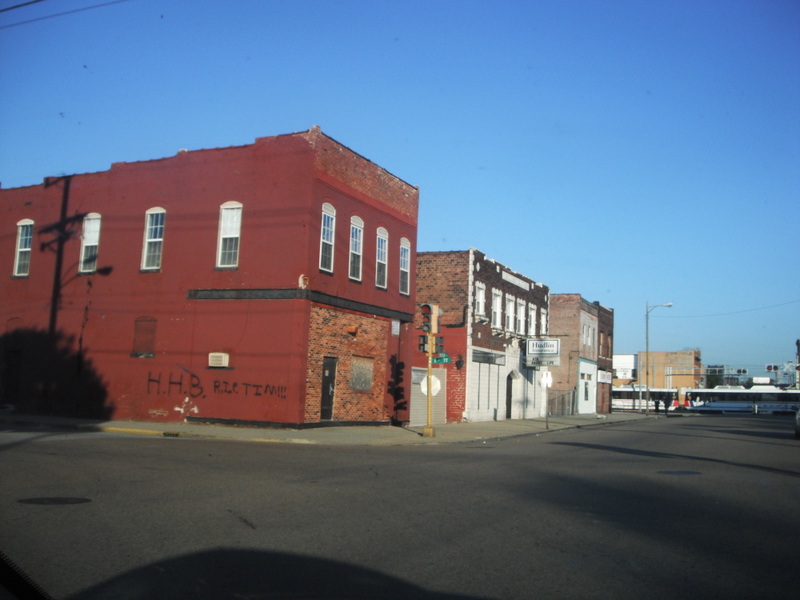 As of 2010, the city had 27,000 inhabitants—less than 1/3 its rate from sixty years prior.  Racial tensions undoubtedly amplified problems in East St. Louis; the city suffered a serious racially motivated riot in 1917.  In the ensuing decades, the white flight that took place in older industrial cities across the country across the country managed to culminate in the almost complete desertion of East St. Louis, which today this day is nearly 98% black.  Needless to say, people of all races with enough wherewithal have striven to get out of East St. Louis for quite some time.  It typically ranks near the top small cities in America for percentage of population in poverty.  As is typically the case, these people evacuating East St. Louis, few of whom have a great deal of assets to begin with (housing equity in ESL is next to nothing), quite logically move to the next tranche of housing affordability, which are typically the (slightly) more economically healthy communities nearby.  The migration pattern around East Saint Louis is obvious: abutting municipalities such as Washington Park, Centreville, and Cahokia now suffer similar conditions.  These three communities, originally early 20th century bedroom communities that swelled from the white flight after 1950, now have profiles similar to the core city from where the flight began: poverty is above 20% in each, and the African American population ranges from 55% to 95% (despite the fact that St. Clair County as a whole is only 29% black).  Those with more continue to flee from those with less.

The aforementioned village of Fairmont City also sits in close proximity to East Saint Louis, but its ethnic shift falls under different contours.  Originally settled by Central European immigrants, the non-Hispanic white population plunged as Latino settlers moved in, pushing the Hispanic population above 55%.  Fairmont City’s population hasn’t dropped like the other communities listed; in fact, it grew from about 2400 to 2600 over the last ten years.  But the newcomers, often non-English speaking, lack the same purchasing power as their long established white predecessors.  How does this shape the commercial landscape? 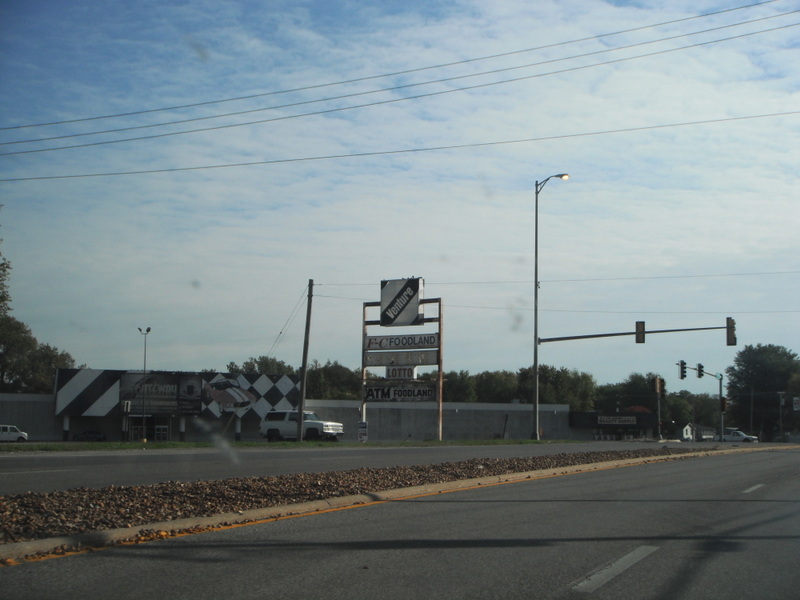 It’s not so much that Venture went out of business in 1998; it’s that nothing has come to replace it, or at least nothing with enough capital and staying power to justify removing that sign with the old logo.  A cruddy photograph below suggests that the shopping center might still claim some marginal tenants: 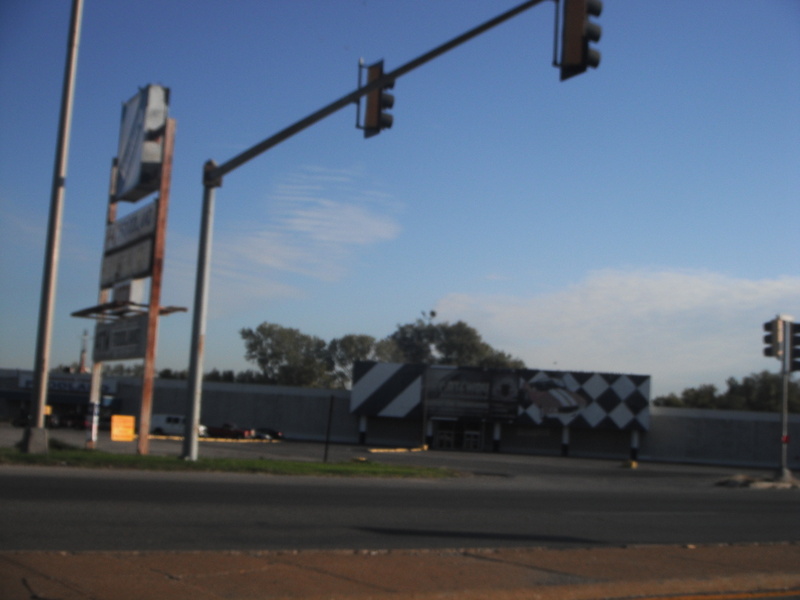 Unfortunately, I didn’t think to get a good image of the store as I zipped by, but it appears that it still might host (or has recently hosted) some sort of showroom for racing cars.  But it’s obviously not an establishment with enough capital to replace the “Venture” sign along the road, and it doesn’t appear the owners could conceal all of the old logo on the sign attached to the building.  Perhaps it didn’t matter enough: the checkered flag and the diagonal stripes still use the same black-and-white motif.

For Fairmont City, with a poverty rate now hovering around 15%, economic disinvestment has induced retail stagnancy, forcing a chronological deep freeze on basic advertising and signage.  Or, to use the metaphor in this essay’s title, a volcano suddenly erupted and halted economic advancement in its tracks.  Apparently as recently as 1995—when Venture stores were at their peak—the Fairmount City area could economically support this competitor of Target.  Not anymore.  The middle class fled that quickly.  This aging big box may eventually find a new tenant, though the demographic shift doesn’t suggest that a widely known national chain is itching to move in.  But it could be just the right size—and location—for a supermercado.

PrevVitality behind venetian blinds.
Treating hemorrhaging retail with a tourniquet.Next

8 thoughts on “Vesuvius erupts in the prairie.”