If a mall implodes in a small town, is anyone there to hear it–or to care?

I’ve documented evolving retail trends with a keen eye over the past few years.  Regardless of the size of the community, certain similar features have emerged that very well may augur a monumental shift in typology, akin to what transpired in the 1950s and 60s when pedestrian-scaled downtowns lost all their commerce to suburban strip malls and shopping malls catering to the automobile.  This time, the loser is exactly what previously vanquished the downtown: the enclosed shopping mall.

It doesn’t take a rocket scientist (or even an entry-level associate at Simon Property Group) to conclude that the era of the mall is over.  Sure, plenty of malls out there are still thriving, but you’d be hard pressed to find one person in this country who cannot think of a mall that is dying, or is already completely dead.  The last mall built in the US was The Mall at Turtle Creek in Jonesboro, Arkansas, in 2006.  (Incidentally, it was the second mall to open in the Jonesboro metropolitan area; the older mall, Indian Mall—serving the community since 1967—promptly lost nearly all of its tenants, and quickly died.  Demolition crews took down everything except the still operating Sears in 2012.) While Simon (among others) proposed some malls in the latter part of the decade, all deals collapsed at the onset of the 2008 recession.  Not a single mall has broken ground in seven years.  As recently as the early 1990s, a new mall opened somewhere in the country at least every month—in the 80s, they opened practically every week.   Not only is the mall no longer the dominant hub for retail in large metro areas, it has lost out in the smaller ones as well.

I noticed this shift—already widely documented throughout major cities—in the small metropolitan area of Houma, Louisiana, where pocket neighborhood shopping districts (scattered throughout the city) and the moderately sized Southland Mall were losing out steadily to a throng of big-box stores, all lined up in a row along one of the biggest highways in town.  It seemed like residents of Houma were more than willing to drive greater distances to run the gauntlet of traffic around the superstores, rather than enjoy the convenience of a smaller retail plaza close to home.  Today, those neighborhood strip malls, close to most of the housing, generally share high levels of vacancy and disrepair.  Meanwhile, the Southland Mall clings to life, its occupancy rate at around 60%, well below the level indicative of a healthy commercial landscape.

Now, apparently, the enclosed shopping mall even struggles in municipalities so small that it’s hard to spot the competition. 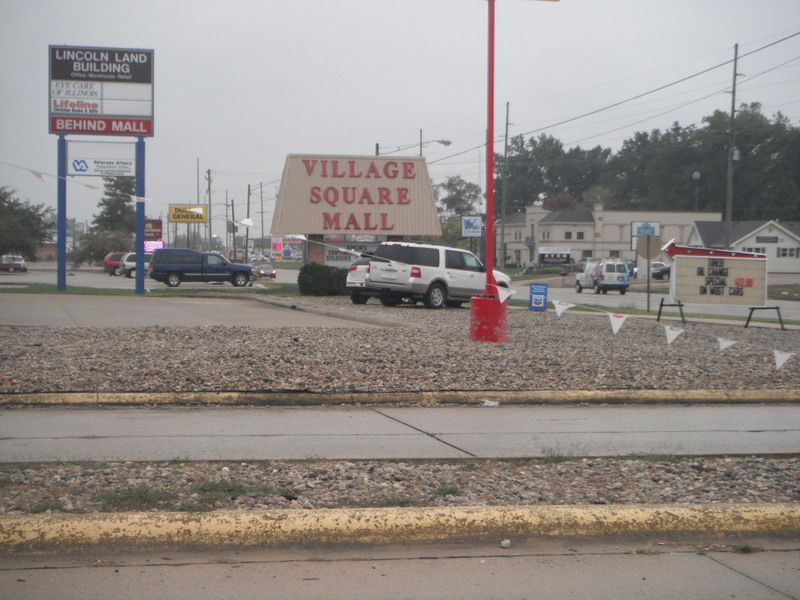 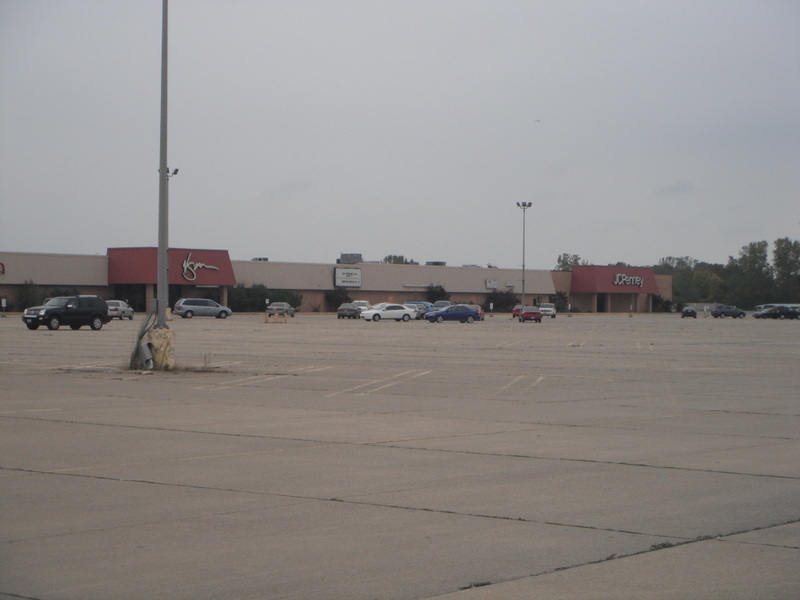 The above photo depicts the Village Square Mall in Effingham, a community with a little over 12,000 inhabitants in south-central Illinois.  Truth be told, the economic conditions in Effingham are not hugely different from Houma: the regional economy has weathered significant ups and downs over the last few decades, but the population of the municipalities themselves has remained mostly stable.  Both municipalities are regional employment hubs, offering both jobs and retail offerings that serve a broader spatial area than their populations would suggest.  And in both cases, the downtowns show some evidence of revitalization, featuring locally run shops and restaurants in refurbished older buildings.  Effingham has only about one-third of the population of Houma, though, and it boasts one significant advantage: it sits at the convergence of two major thoroughfares, Interstate 70 (connecting St. Louis to Terre Haute, and eventually Indianapolis) and Interstate 57 (connecting Chicago and Champaign eventually toward Memphis). 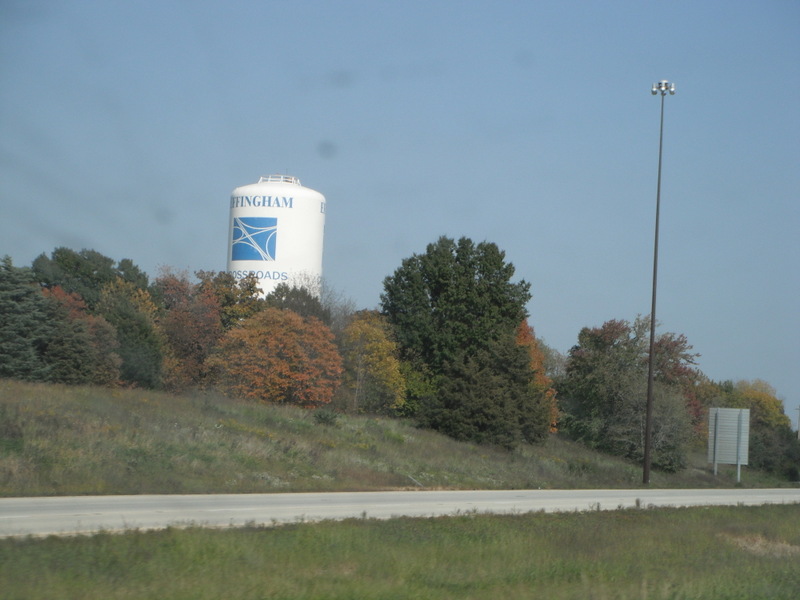 No doubt this geographic blessing helped the city christen itself as “the Crossroads of Opportunity” and emboldened it to earn the status of a Micropolitan Area by the US Census Bureau, indicating that it attracts commuters well outside its city limits, much the way a metropolitan area does—except that Effingham is not populous enough to classify as a metropolitan area.  However, its centrality and influence span the entirety of Effingham County, which contains a population of 34,000 people—almost identical to the city limits of Houma.

Thanks to these two interstates, Effingham may be preferred stop for travelers coming lengthwise across Illinois, or for those seeking a pit stop between St. Louis and Indianapolis.  In case the long-distance traveler wasn’t aware of Effingham’s regional significance, the local Cross Foundation helped erect a 198-foot steel cross structure on the outskirts of the city limits, broadly visible from a distance and dedicated just days after the September 11, 2011 attacks. 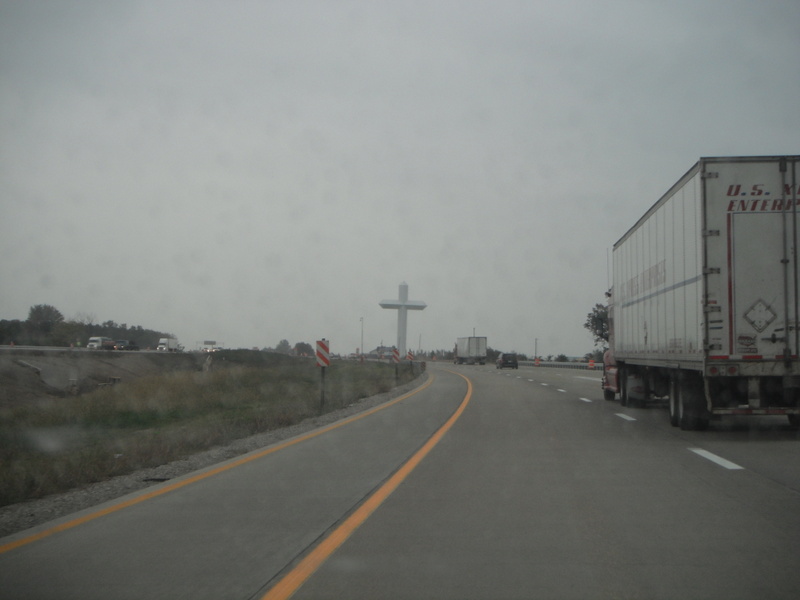 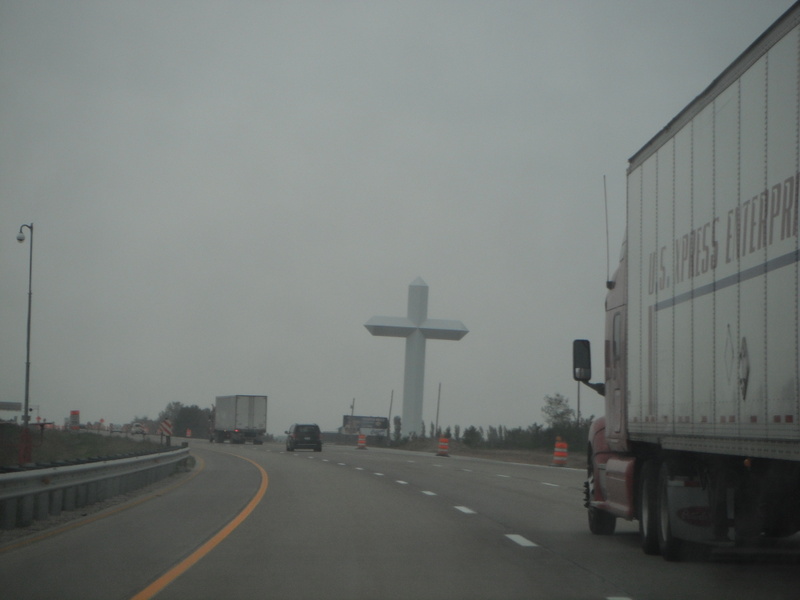 It is the region’s biggest attraction.  And, surrounding the cross in almost every direction is a none-too-surprising industry.  Unfortunately, I didn’t get any good photos, but Google Streetview offers a perfectly good representation, both here and a bit further to the north. It should come as no surprise that Effingham boasts a flourishing logistics and trucking industry, no doubt providing the city with tax revenue that explains its well-paved streets, abundant sidewalks and jogging paths, and a well-maintained downtown.

But nowhere along the I-70 or I-57 corridors does a motorist encounter a sign for the Village Square Mall.  Taking another look at it, it’s easy to see why it gets neglected.  The photos at the top of this essay actually showed the goodwing of the mall, with a still operational J.C. Penney.  But what about the other wing?  Pivoting to the left, this is what one would see: 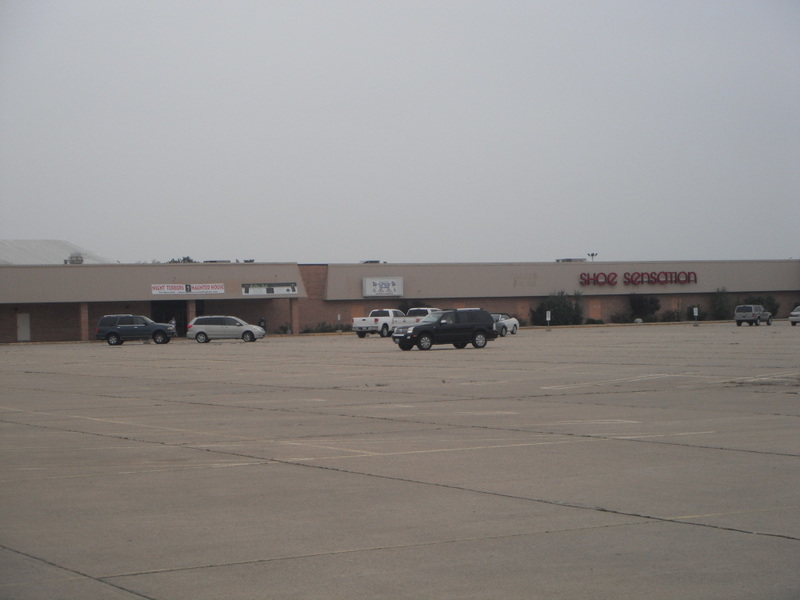 And then a bit further to the left: 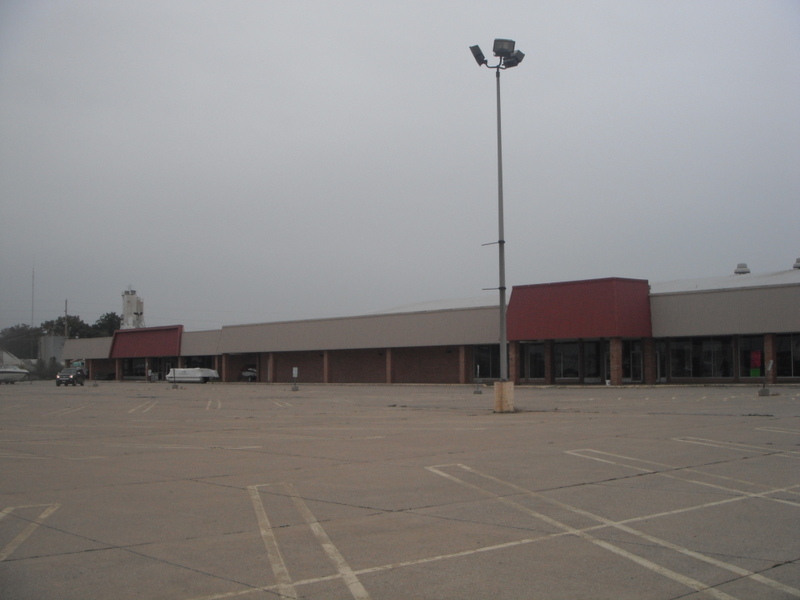 A pretty bleak scene.  It was never a large mall; it probably only has space for 25 inline tenants.  But that parking lot can sure accommodate a lot of cars. 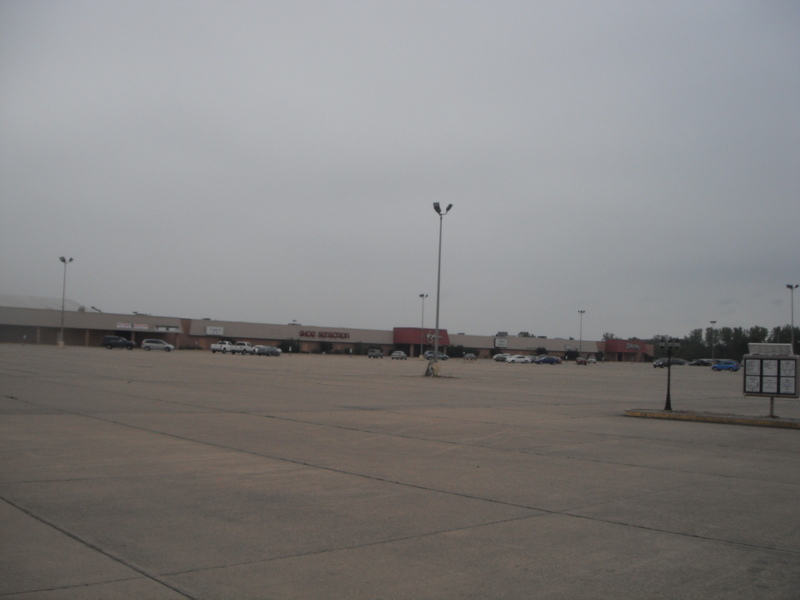 As for the interior, it offers about what one might expect, given the abundance of cars milling around out front. 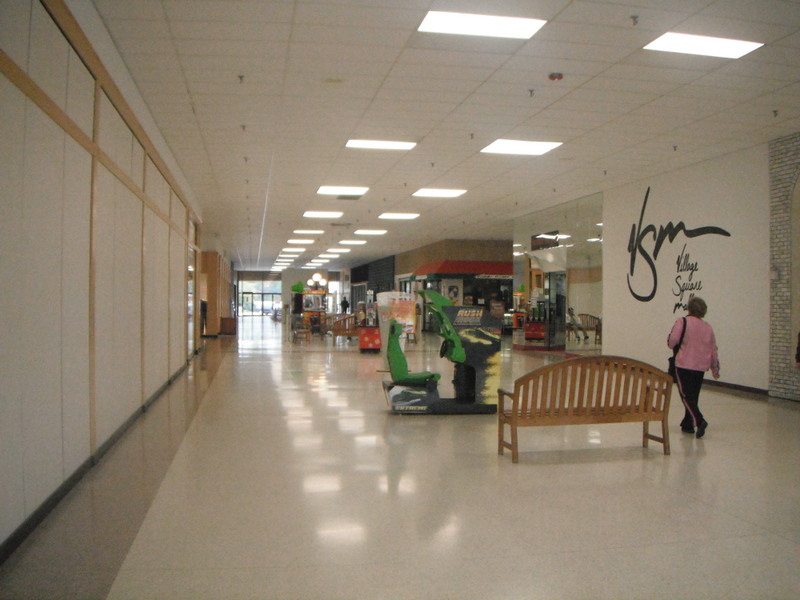 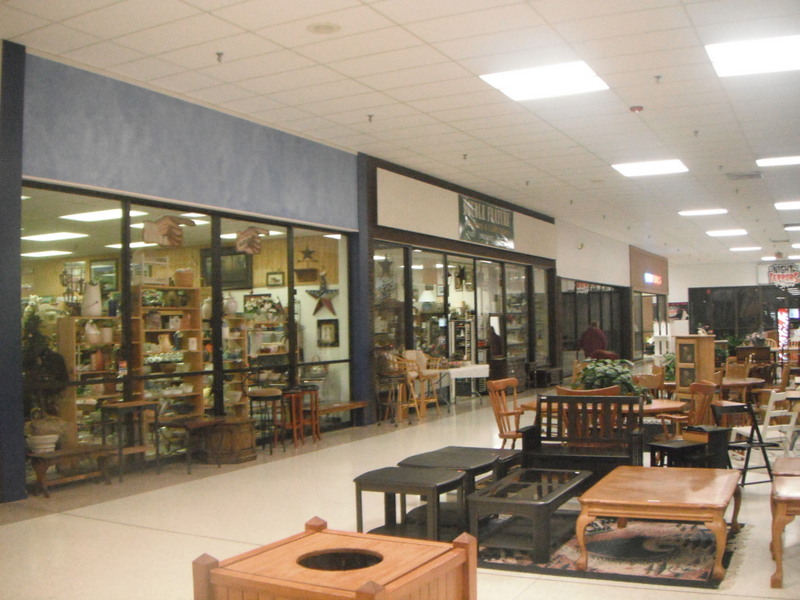 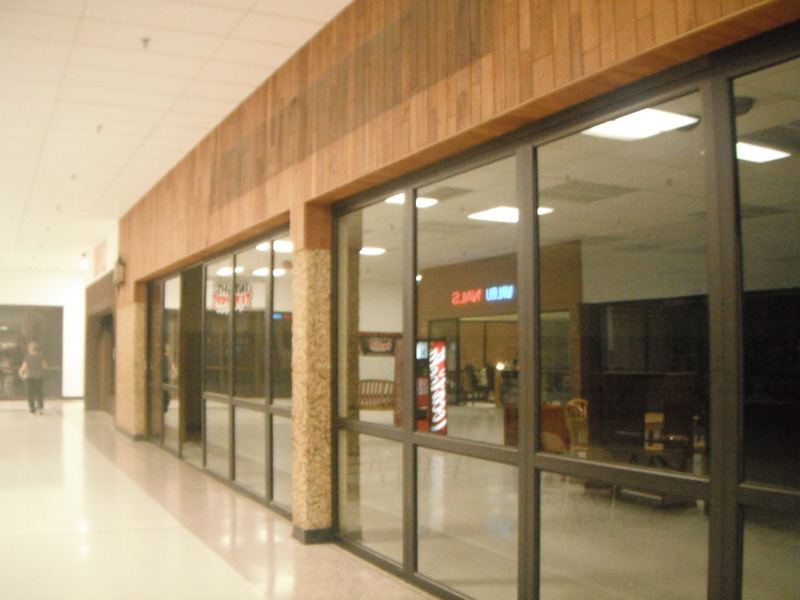 I was pretty taken by the tenant at the other long-vacant anchor store (opposite the J.C. Penney): 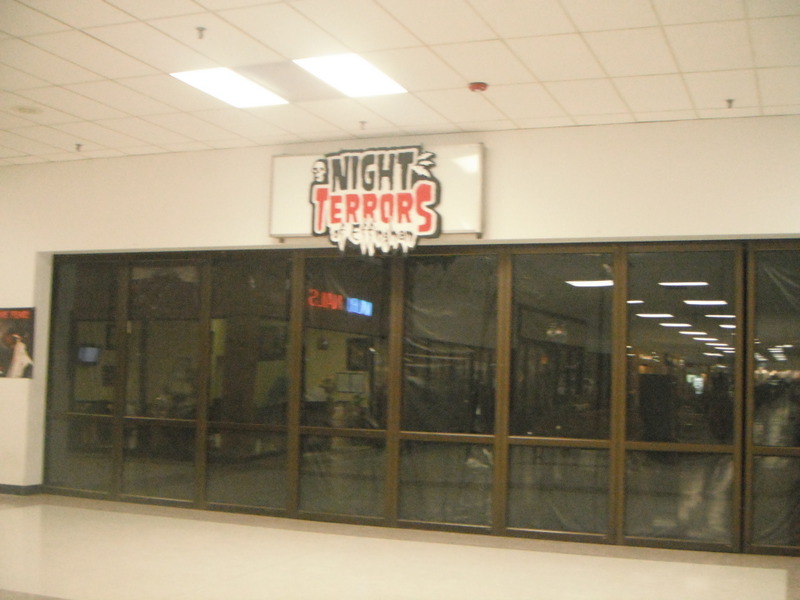 Obviously I’m giving away the time period that I visited the mall, but I have never seen a haunted house in a mall’s dead space before.  Essentially, haunted houses such as these operate in much the same fashion any other holiday-themed pop-up store, viable only a few weeks before Halloween.  Then, no doubt, the large retail space returned to its usual vacancy.  Here’s the outside view: 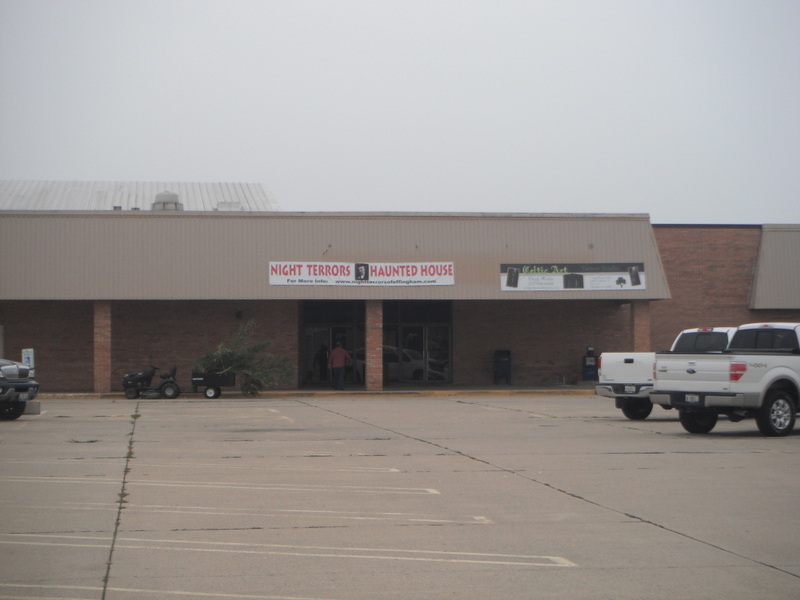 A neglected mall such as Village Square would probably suffer serious vandalism if it were in a more high-crime area.  Effingham doesn’t strike me as that sort of place; so instead, the low levels of security and supervision elicit some amiable eccentricity: 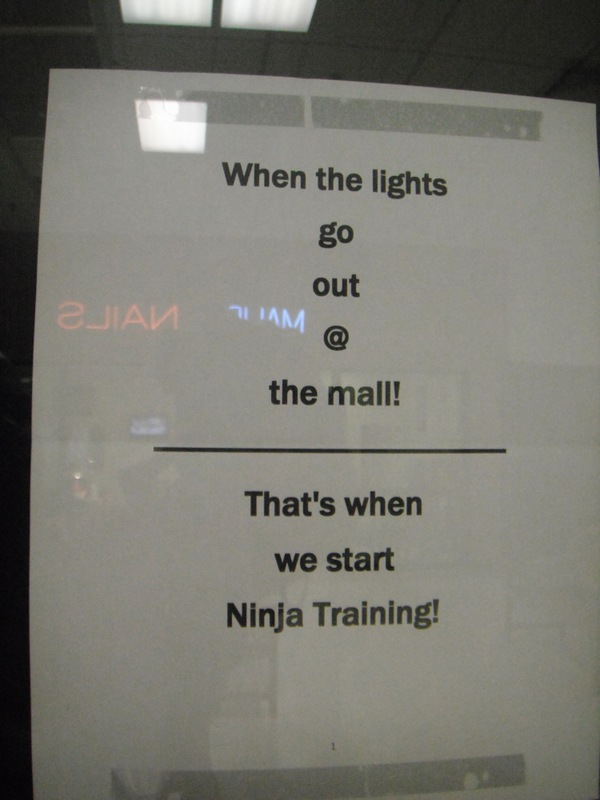 I was about halfway through writing this essay when I learned that the well-known site Labelscar had already covered this tiny mall a couple years ago.  Now I’m trying to find ways to distinguish my essay from the one on there.  That site offers a broader array of interior photos, though they’re older, and our primary observation/argument is just about the same: Village Square Mall has endured a steady decline over many years.  The writer for Labelscar claims that a series of non-local property managers showed persistent ineptitude in operating the mall and attracting tenants, and I wouldn’t doubt it.  But the general patterns of development around Effingham are what really stacked the deck against the Village Square Mall. 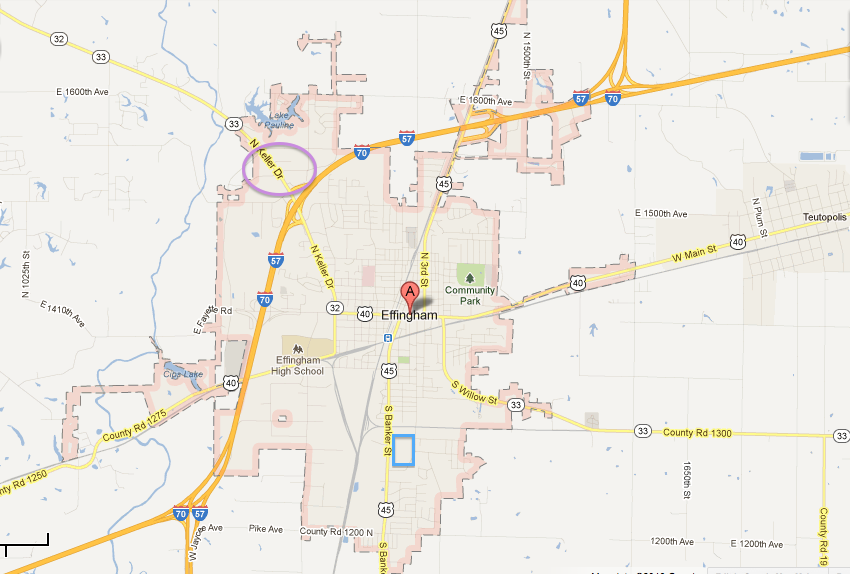 The map above perfectly demonstrates the problem.  The blue rectangle south of central Effingham shows the general location of the Village Square Mall parcel.  It’s not far from downtown (in Effingham, everything’s close), but notice that the majority of the street grid and development has occurred in a northerly direction.  In addition, the double-barreled interstate I-70/57 wraps around the northern and western city limits—far from the south.  Even if the Village Square Mall were worthy of promotion along the interstate, no amount of signage would make it a convenient destination after getting off the exit ramp.

The map above also reveals what has most likely lead to the mall’s virtual demise.  A purple ellipse on the northwest side of town shows the new retail hub for Effingham, right where busy State Route 33 meets I-57/70 at the exit ramp.  I neglected to photograph the retail at the “Avenue of Mid-America”, but once again Google Streetview comes to the rescue here and a bit to the east, but still in that general location.   You’ve got the usual suspects for shopping and dining: Wal-Mart, Ruby Tuesday, Menards, Arby’s, Starbucks, T.G.I. Friday’s, Cracker Barrel, and a slew of hotels catering to all price ranges.  To the north, sitting amidst an undeveloped field in Effingham’s “frontier”, is a Kohl’s.  Given the persistent success of this supremely well-run company, this land will undoubtedly morph into further big-box retail in the near future, if it hasn’t already (the Google Streetview dates from 2008).

No surprises there.  Much like Houma, the preferred retail hub for Effingham has become even more decentralized than before, lined up along a busy highway that maximizes visibility to the thousands of outsiders who pass through this town on any given day, thanks to those two interstates.  This migration is hardly earth-shattering.  What leaves me scratching my head is the original inspiration for the location of the Village Square Mall.  Why put it to the south?  Was there ever a point when that seemed to be the growing side of town?  If, as Labelscar claims, the mall opened in 1972 through the initiative of a local developer, why didn’t he investigate the construction plans for the interstates?  By the early 1970s, huge portions of these interstates were already complete, and it is likely that the Effington “wraparound” was fully designed, if not already operative.  Did he just have his sights on what most likely has always been the cheaper land?

It’s possible that Village Square would have declined even if it had been front and center along the interstate.  After all, plenty of other malls have sat a stone’s throw from a major highway and croaked in spite of everything; I chronicled the well-known Bannister Mall in Kansas City a few months ago. Not a trace of the Bannister Mall remains, even though I-435 runs immediately to the west.  But Effingham has another peer city in much closer proximity than Houma: Mount Vernon, Illinois, just 70 miles to the south.  I don’t know much about Mount Vernon, except that it, too, sits at the junction of two interstates (I-57 and I-64), has a similar population (15,000), and claims a similarly sized retail hub: the Times Square Mall.  Most online buzz suggests, however, that the Times Square Mall is in much better shape, with three fully operational anchors (Sears, Peebles, J.C. Penney).  It even has a website!  Times Square Mall can claim these victories, despite the fact that Mount Vernon shows evidence of lower economic health than Effingham: it has a higher poverty rate and more notable population loss over the past decade.  But…the Times Square Mall sits just a quarter mile from the busy I-57/64 interstate (probably visible to passers-by), and its on the west side of town—the same direction in which the town’s urbanization seems to be advancing.

I wouldn’t be surprised if Effinghamians go south to Mount Vernon to shop; certainly not the other way around.  Perhaps the Village Square Mall has succumbed to the retail tsunami sweeping America, or it could be something simpler: location, location, location.  The original developer opted for cheap land rather than good land, and though it has taken forty years, eventually the time has come to pay the devil his due.

11 thoughts on “If a mall implodes in a small town, is anyone there to hear it–or to care?”