Peddling politics to pick your poison.

If the free market could ever assume a bodily form, it would have to be a contortionist.  One of the wonders of our federalist system is how deftly and shrewdly private businesses navigate around ordinances and statutes.  While this is obvious when articulated in print, the real-word incarnations are often subtle.  These maneuverings manifest themselves a bit more when spatial boundaries define them, and even more when the political jurisdictions that the boundaries encompass are particularly small.  The northeastern United States is often much more interesting in this regard, not only because practically everything is incorporated, but because the jurisdictions are tiny in comparison to anything we might see out west.  Over the course of four hours, you can cross four states in New England.  And the home rule culture is often so powerful that one town may subject a certain industry to certain regulations that the next town—just two miles away—completely ignores.

Nothing I have witnessed recently better demonstrates this culture than a trip to the town of Morrisville, Pennsylvania, nestled lazily along the Delaware River.  Crossing the river from the east on State Road 32 (known in Morrisville as Bridge Street), the modest, low-slung commercial center greets the motorist almost immediately. 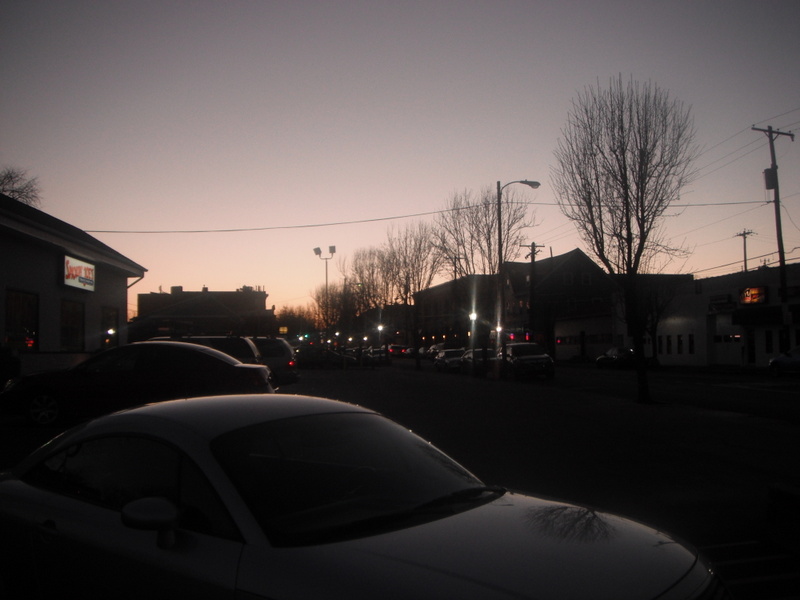 The sunset vista shrouds almost all of the details, but the basic massing of the main street at the horizon line shows up clearly enough.  Here’s a crisper view after pivoting the other direction. 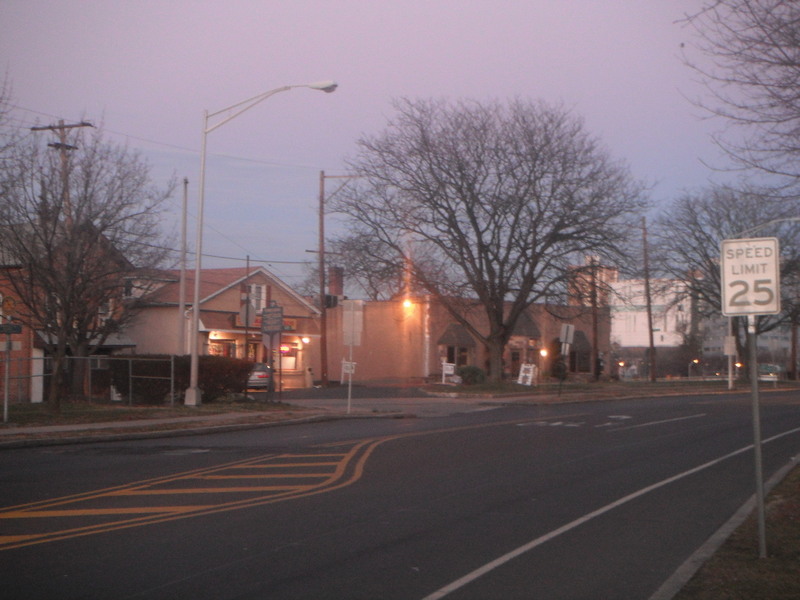 The bridge over the Delaware River would sprawl just a wee bit further off the edge of the frame on the right.  Sunlight may have been fading, but the signs on all the storefronts show up clearly enough.  Here’s a closer, sharper view of the well-lit storefront house in the middle of the above photo. 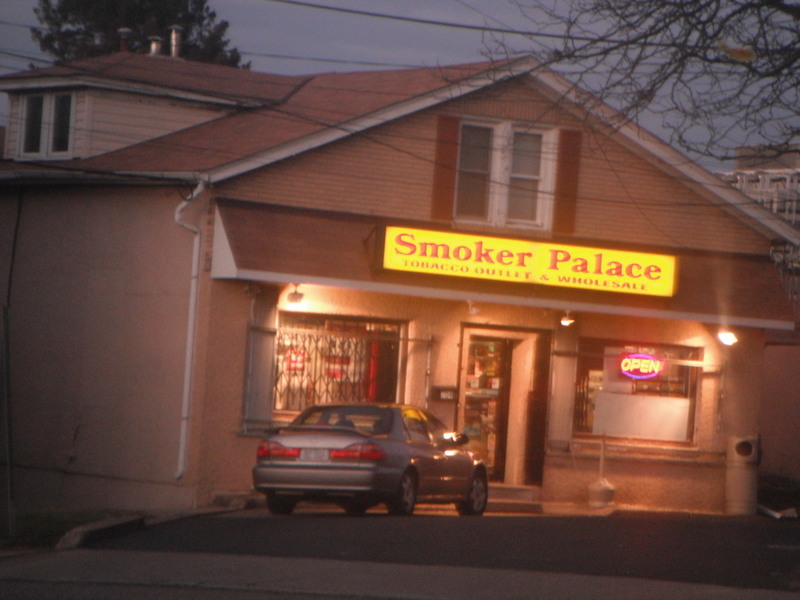 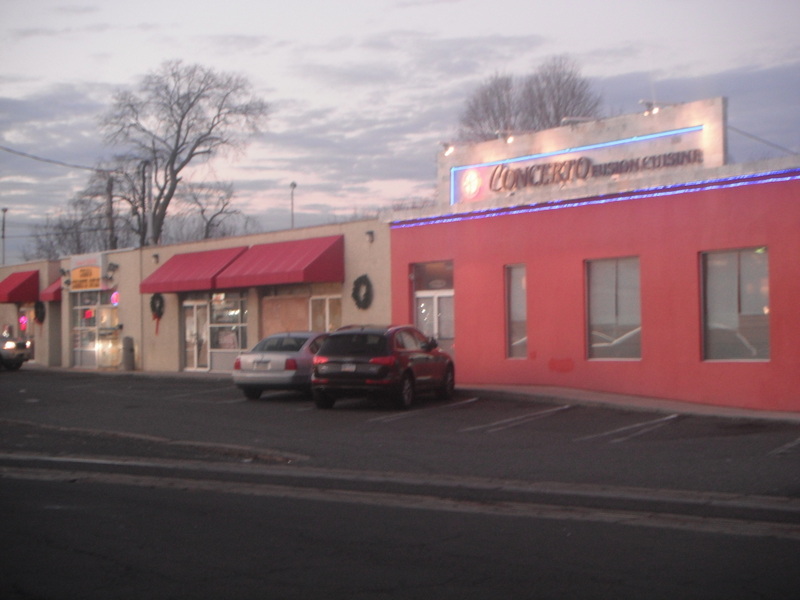 A fusion restaurant of some sort to the right, but what’s to the left? 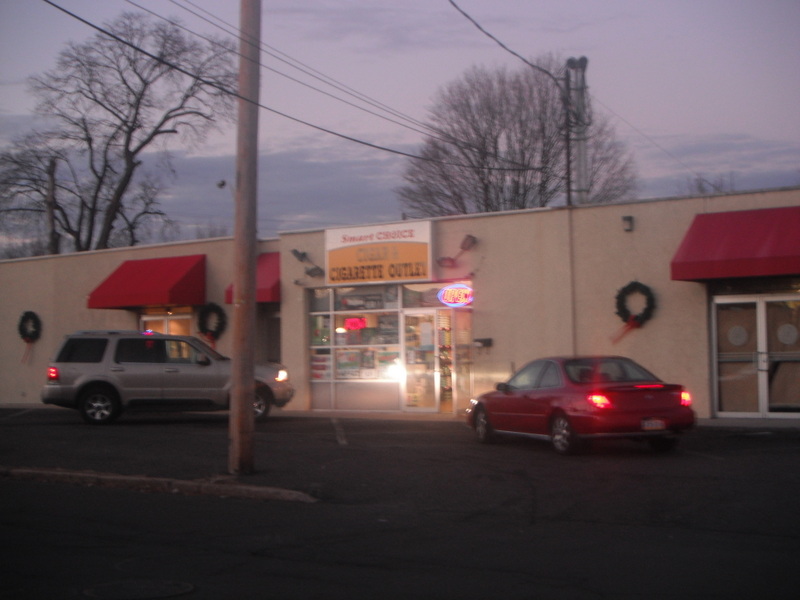 Another cheap cigarette outlet.  And, on the other side of Delmorr Avenue where it intersects with Bridge Street… 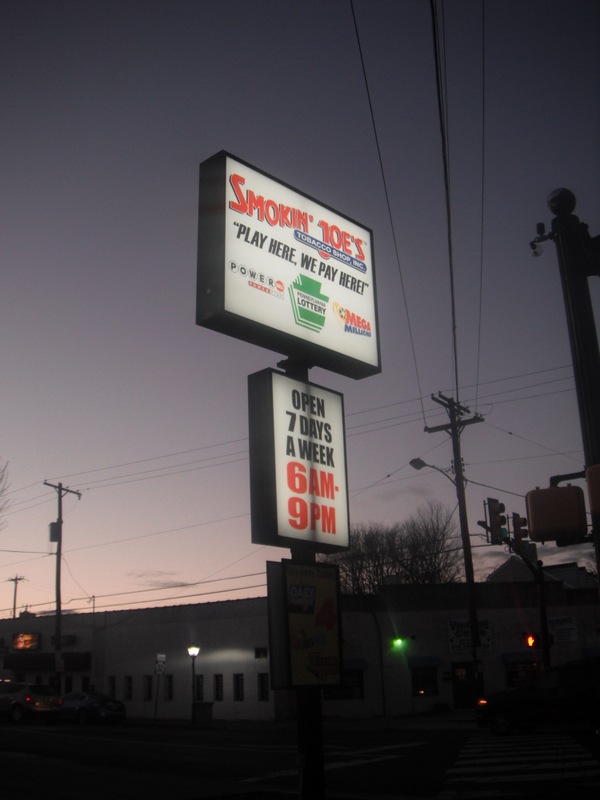 A tobacco shop.  Incidentally, Smokin’ Joe’s is the same storefront featured in that silhouetted first photo—the small white sign on the far left of pic.

Notice a trend here?  Morrisville’s entire commercial spine is only three blocks long, so it doesn’t take much to absorb the full perspective, even when proceeding by foot.  Here are some additional storefronts on the opposite side of the street: 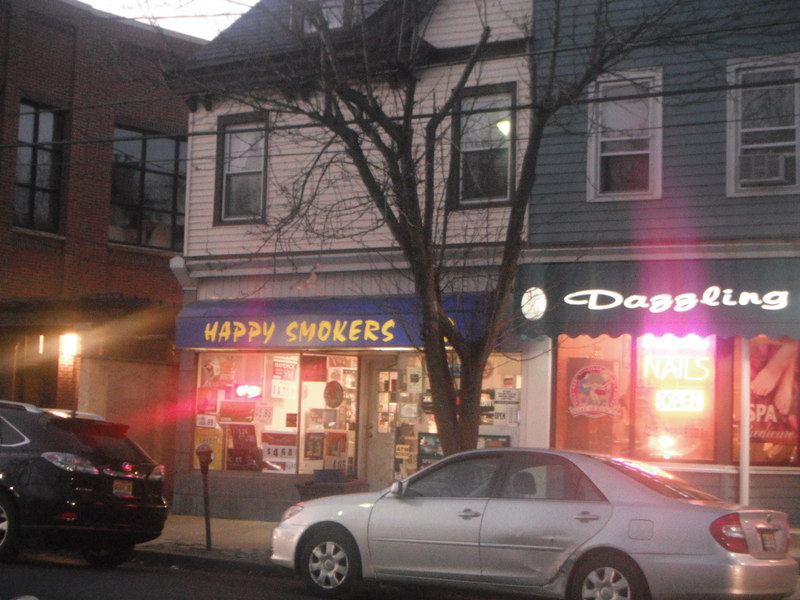 More happy smokers.  Continuing westward, the next block hosts a building that is conspicuously new-looking.  Perhaps it’s infill development; if so, it’s pretty smart and blends in almost seamlessly. 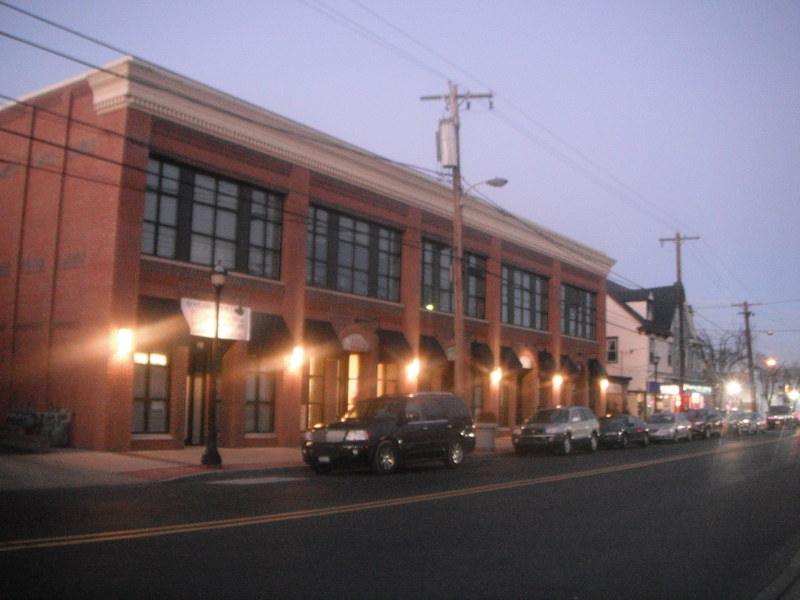 It’s also the only major building I’ve encountered in which nicotine doesn’t figure heavily.  My side of the main street is a different story: 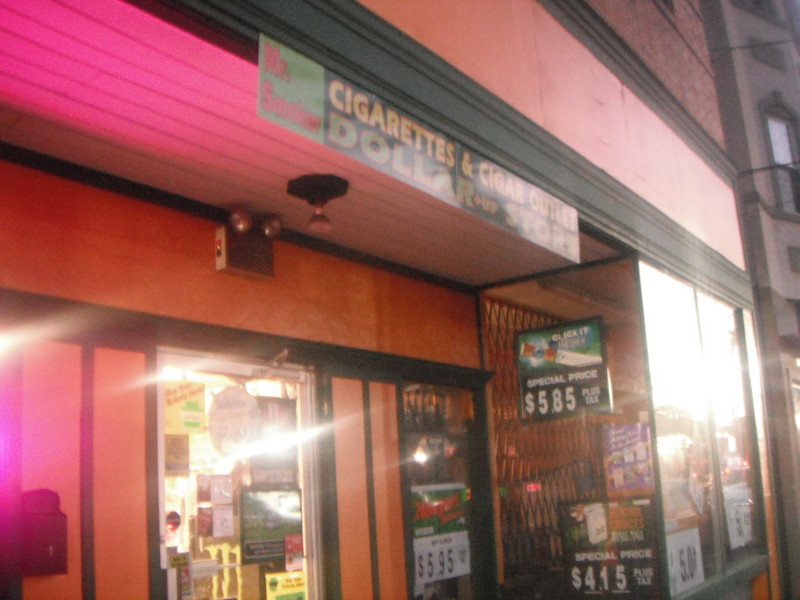 And just two or three doors down: 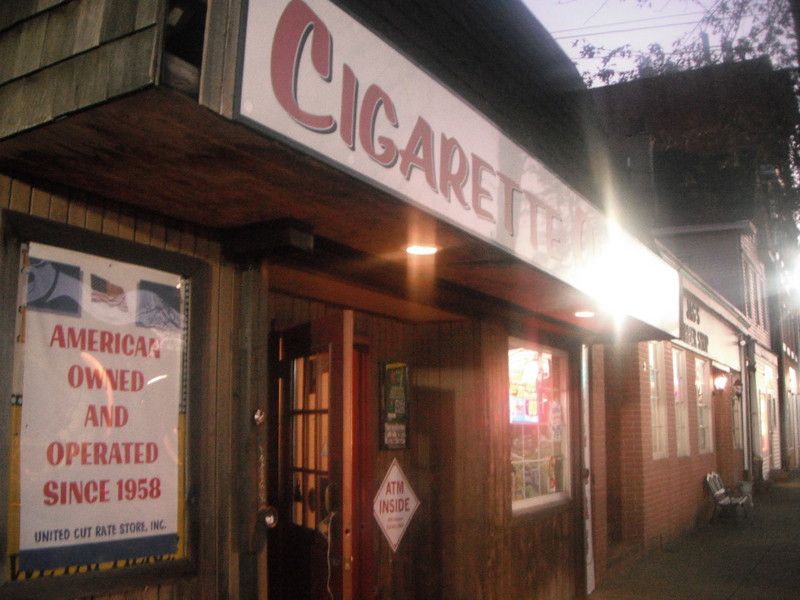 A smoke shop that has been open for over half a decade—an institution!  Finally, as Bridge Street intersects with Pennsylvania Avenue, the old-fashioned commercial street comes to an end, giving way to a familiar strip mall at the next block. 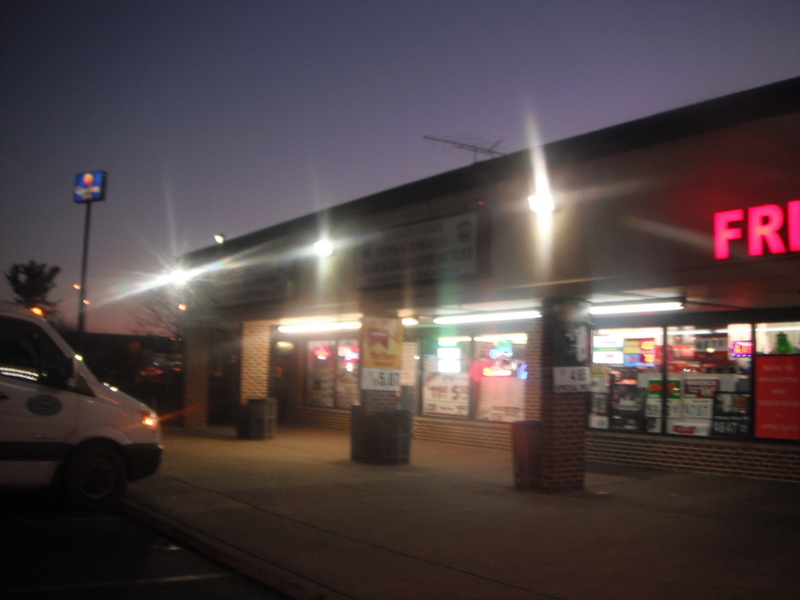 It’s not much to look at even in broad daylight, but particularly hard for me to capture as twilight sets in.  But I just managed to capture the sign for the middle storefront: 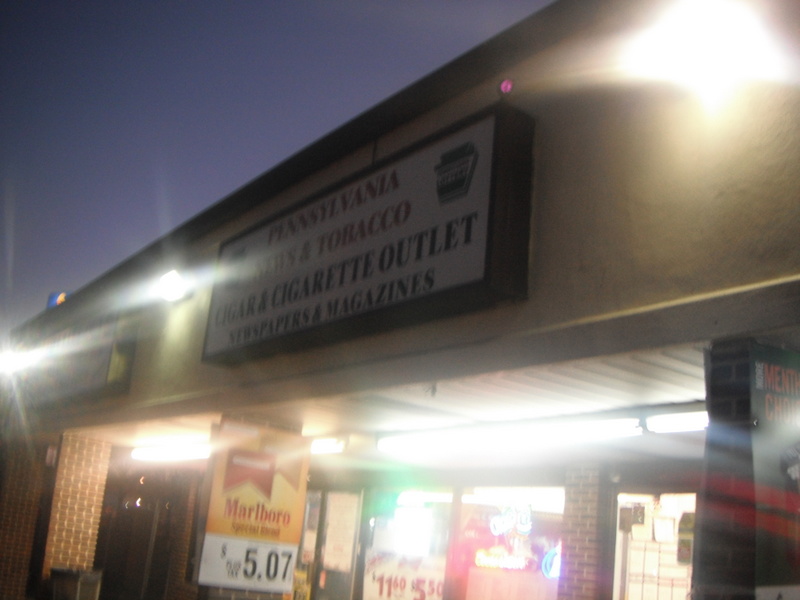 You better believe it’s a cigarette shop.  By my count that makes an earth-shattering seven smoke shops across what is essentially a three-block main street and its affiliated little strip centers.  Unreal.  When I first made this observation—which was probably the second time I passed through Morrisville, I just assumed it was a drab, hardscrabble little blue-collar down, in which 95% of the denizens placate themselves through a steady diet of Yuengling and nicotine.  But then I realized I wasn’t being fair; I wasn’t placing Morrisville in its full political context.

By the same token, I haven’t been fair to readers of this article since that introductory paragraph: Morrisville indeed sits along the Delaware River, but the river forms the border between Pennsylvania and New Jersey.  (Folks from the Mid-Atlantic would probably know this, but it isn’t common knowledge to the rest of the country.)  This is critical because directly across the Delaware River from Morrisville is Trenton, New Jersey, the state capital and a major population center.  But what does that have to do with Morrisville’s predilection for smokes?

I didn’t even have to do the research.  Of course: New Jersey’s cigarette taxes are significantly higher.  A quick view of the 2013 rates provided by the Federation of Tax Administrators confirms it: while Pennsylvania’s tax rate of 160 cents per pack isn’t exactly low (22nd in the nation), it’s still over a dollar saved from Jersey’s 270 per pack (6th in the nation).  And Pennsylvania shares a large border with New York (1stin the nation, with a whopping 435-cent tax).  I’m sure the border towns up by the Empire State are glutted with tobacco shops on the Pennsylvania side as well.

It’s obvious now that these small business owners saw an opportunity with the leasable space in downtown Morrisville and ran with it.  When New Jerseyans make that quick trip across the bridge, they enjoy a smorgasbord of smoke shops from which to choose, and obviously enough of them cross here that seven proprietors can support themselves despite being a stone’s throw from one another.  The cigarette industry contorts itself, over-representing one side of the river where the prices are lower and, quite logically, demand is much greater.  I alluded to this once in the past in New England, where New Hampshire “front loads” all the sins that it doesn’t regulate heavily in a strip mall right near its border (fireworks, pornography, pawn shops), whereas Massachusetts outlaws or seriously regulates these enterprises.  The Bay Staters just have to head up to the state whose motto is “Live Free or Die” to sample some forbidden fruit.

Cigarettes are without a doubt the most high-profile sin tax, but the situation in Morrisville leads one to question whether the tax can pass a tipping point, when it ceases to raise as much revenue as it would if the rates were more competitive with the neighbors.  After all, New Jersey’s a small state, and even folks living along the eastern shore still only have at most a 70-minute drive to the border, so they could cross the river periodically, stock up in Pennsylvania, and save mucho dinero.  The tax differentials may level out within the Keystone State, because other parts of Pennsylvania share a border with West Virginia, where it only costs 55 cents a pack.  What the state loses in the southwest finds compensation through what it gains along the Delaware River.  The give–and-take between two adjacent states involves too many laws, goods and services to determine which one ultimately wins the most revenue, but Morrisville comes out on top in terms of winning a surefire tenant to fill commercial space on the main street, resulting in a town with a fairly low retail vacancy rate, albeit one that is largely tenanted by a carcinogen.  Now if only parents could get as worked up about smoke shops as they do about adult video stores and tattoo parlors…

PrevMONTAGE: Salvaging a sacred space by expanding its use.
Browser band-aids.Next

5 thoughts on “Peddling politics to pick your poison.”