After a decade of persistent turbulence within the airline industry, it is no surprise that scarcely a year goes by that one of the big carriers merges with a second, or a third files for Chapter 11 bankruptcy protection.  Among industries that the American Customer Satisfaction Index evaluates, airlines elicit some of the lowest scores—if not the absolute lowest, as they did in 2011.  (They performed a bit better in 2012, but still lagged in relation to other industries like shipping, restaurants, or hotels.) Within the past 18 months, carriers of widely varying sizes have filed Chapter 11, from regional contractors like Pinnacle to high profile global names like American,  while the military/postal contractor Ryan International liquidated just a few weeks ago.

Less publicized is the spillover customer dissatisfaction directed toward airports themselves.  While the airlines have responded to the industry’s contraction by slicing away at amenities and embedding new fees, many of the major airports are continuing to renovate (or even completely rebuild) their terminals as if they’re flush with cash.  Maybe they are, though the FAA and municipal governments typically share the funding for upgrades, while occasionally forging partnerships with the tenant airlines.  At any rate, the public dollars that fund the majority of improvements don’t seem to be in recession just because the economy is.  But J.D. Power and Associates’ North America Airport Satisfaction Study reveals that the operations at the airport terminals still receive lower ratings (690 on a 1,000-point scale) on average than affiliated services such as hotels (756) and rental cars (733).

During peak travel times in the busy core of major airports (those with over 30 million passengers per year), neither consumer malaise nor shrinking demand are likely to stand out.  But what about off-peak times at airports that, while prominent, fall short of the top ten busiest?  Sometimes it doesn’t take a great deal of scrutiny to see how little floor space these airports are using.  Take Cleveland-Hopkins International (CLE), for example: in Calendar Year 2011 it ranked as the nation’s 39th busiest airport, with 4.4 million enplanements.  But you’d never guess it’s a busy airport from a trip through Concourse D. 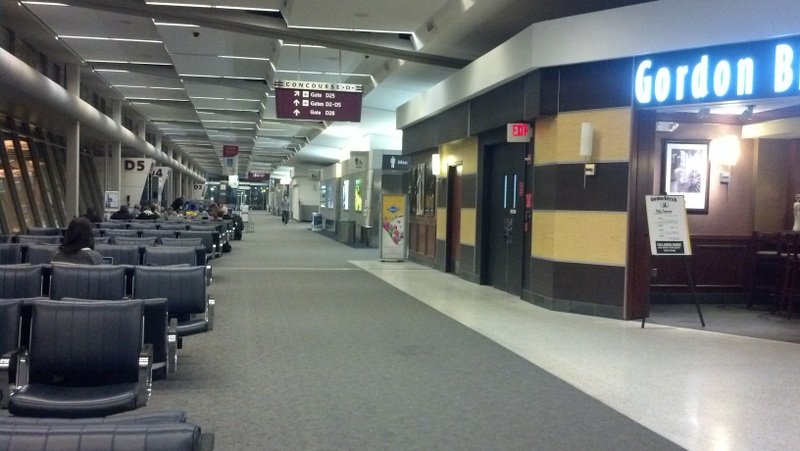 As the Terminal Map reveals, this concourse is noncontiguous from the other three, linked only by a pedestrian tunnel.  Perhaps that’s why it seems to suffer the red-headed stepchild treatment.  United Airlines persistently uses the gates immediately adjacent to the tunnel, generating enough foot traffic to support a few fast-food and full-service restaurants, such as Gordon Biersch, Obrycki’s, Sbarro, and Subway.  But as one walks further to the edges of the concourse, everything thins out considerably. 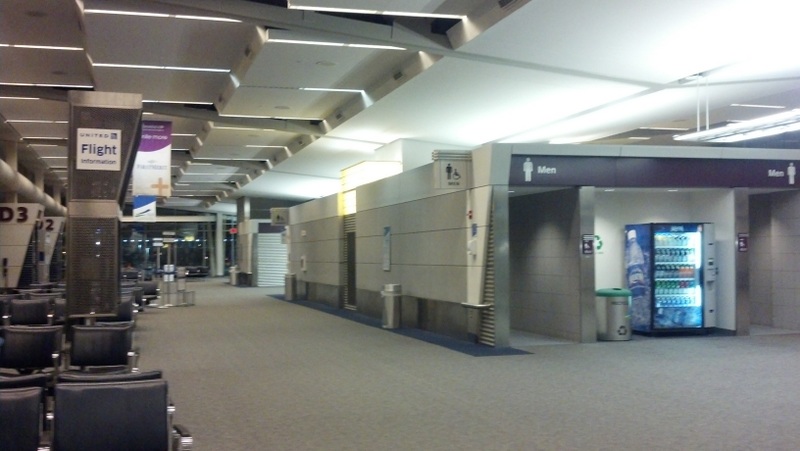 Or it thins out completely.  Perhaps New Year’s Day (the day I took these pictures) is a slow travel day, but my hunch regarding people’s vacation schedules would suggest the exact opposite.  Yet the conditions of the gates here show no indication United has any flights scheduled for later in the evening.  (As always, my apologies for the poor quality of the photo.) 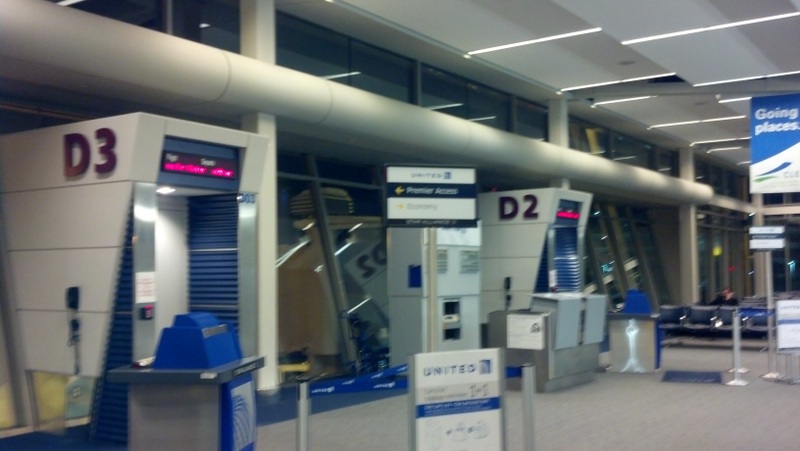 This wing of the Cleveland-Hopkins Concourse D is deserted, and other telltale details suggest this is business as usual. 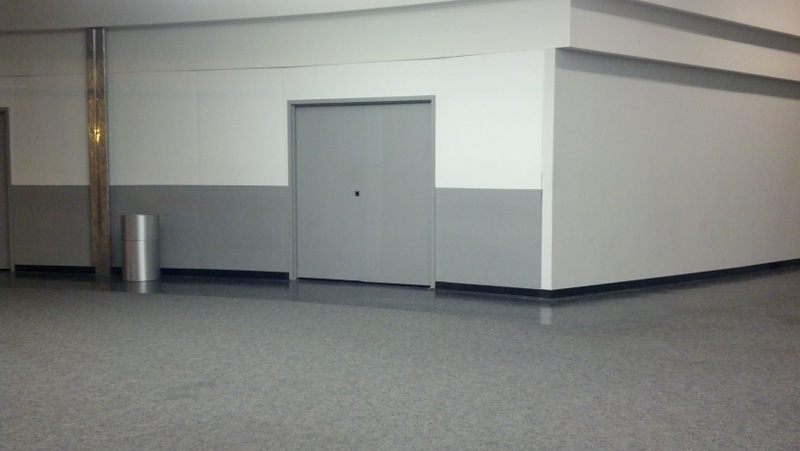 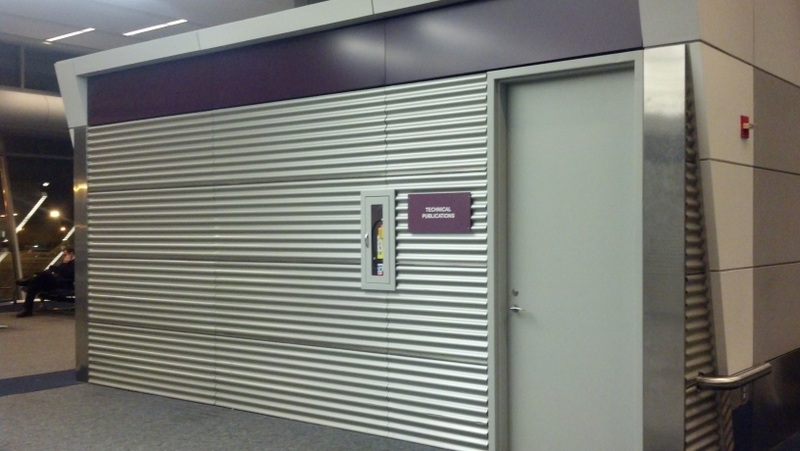 The image almost recalls one of the many dead malls I have visited in the past.  Where are the kiosks or the restaurants?  While there are none to be found, the design of the terminal clearly would allow for them to flourish.  The second of those photos shows a door to a room that apparently contains “technical publications”, most likely a back-of-the-house feature that oddly sits in one of the farthest reaches of the terminal.  Why sequester it from all the other administrative operations?  I’m not an expert on airport facilities, and it’s highly possible that the far reaches of Cleveland-Hopkins Concourse D never intended to host any major customer services, since foot traffic would inevitably thin the further one gets from the center of the terminal, much like a bell curve.  But a vibrant concourse usually still hosts at least a few retail options all the way to its endpoint.  The terminal map of CLE certainly indicates that Concourses B and C offer shopping all the way to their outer edges.  But the underutilized Cleveland-Hopkins Concourse D is empty at either wing.  The above pictures revealed one side of the large hallway; here’s the other: 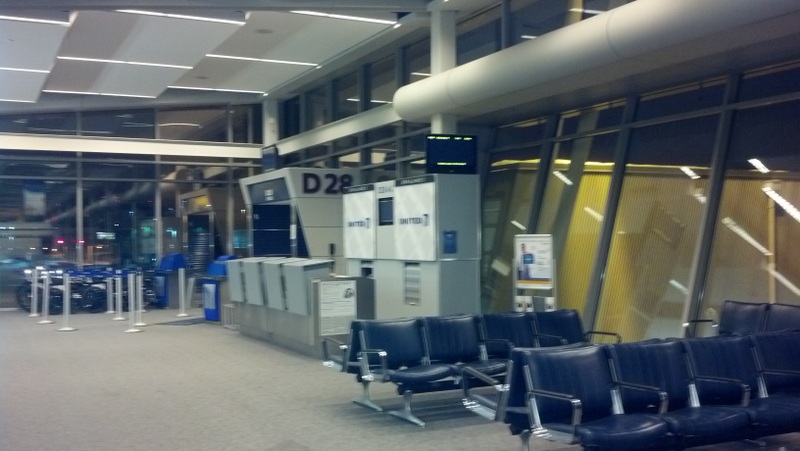 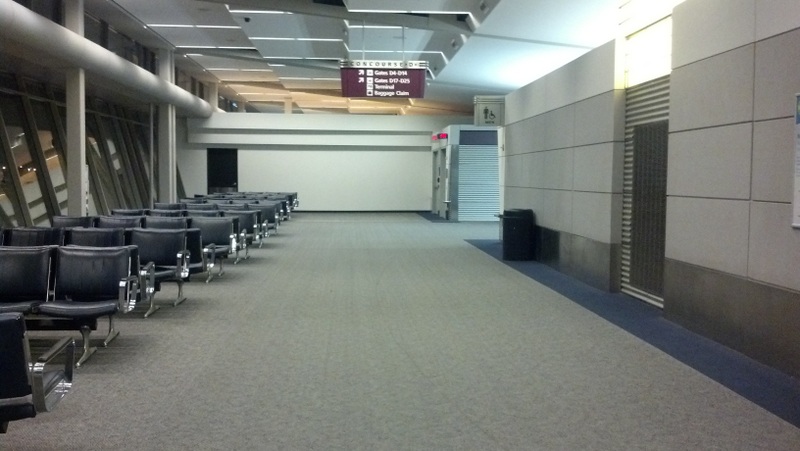 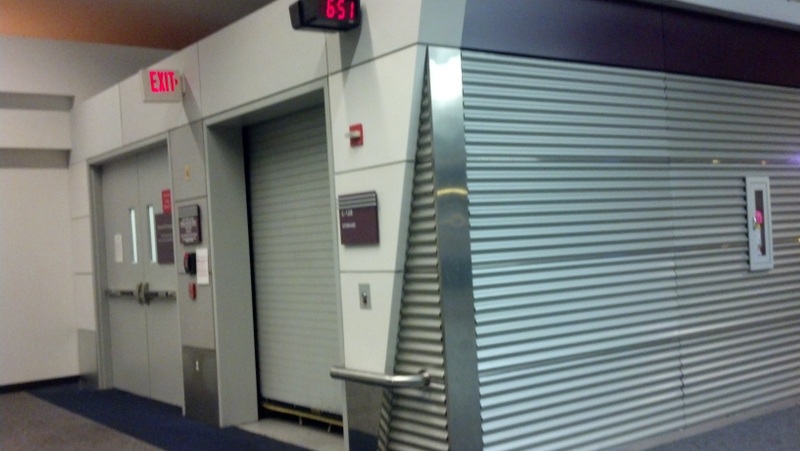 The final room is storage.  If CLE put these gates to use for conventional enplanements, it would logically follow for the authorities to lease this room to a restaurant tenant, transforming it into revenue generating floor space instead of highly inefficient storage in an otherwise public area.

I could be dead wrong in my assumptions regarding the organization of a concourse: it’s possible that storage facilities for certain emergency equipment must exist at particular intervals.  But the numbers for Cleveland-Hopkins suggest that the airport’s passenger traffic has lagged for some time.  The Federal Aviation Administration does not appear to release a trend analysis of passenger or enplanement, though Wikipedia takes FAA data and aggregates it for ease of analysis across multiple years.  The chart reveals that CLE’s enplanements have plummeted in recent years, from 5.5 million in CY 05 (when the airport was ranked 35th in the nation) to its CY 11 ranking of 39, with 4.4 million enplanements.  This 20.4% decline doesn’t necessarily distinguish CLE, since a precipitous decrease in enplanements characterized a number of airports during the last decade, including 40th ranked Sacramento (SMF) that dropped 14.4% in the same time frame, and 41st ranked Memphis (MEM) plunged a staggering 22.8%.  But notice that booming Austin experienced a considerable gain in enplanements at its Bergstrom Airport (AUS) during the same time frame.

Unfortunately, CLE also claims the dubious distinction of resting in the middle what has for the last decade been one of the more economically stagnant major metropolitan areas in the country: not only is the population within Cleveland city limits projected to be the second-fastest shrinking in the country (behind only Detroit) between July 2011 and the April 2010 Census, but the entire Cleveland-Akron-Elyria Combined Statistical Area, including the majority of the population of northeast Ohio, lost 2.2% of its population between 2000 and 2010.  Population loss within historic city boundaries is hardly uncommon; a number of cities across the country suffer the same predicament as Cleveland.  But only a handful of the most depressed regions are enduring such outmigration that even the suburbs cannot compensate for the core city, resulting in a net loss.  Cleveland is not only one of those cities (most of which are concentrated in the Rust Belt region in close proximity to Lake Erie), but metro Cleveland reported population losses in the 1970s and 1980s as well.  Only in the 1990s did the metropolitan area enjoy a net increase, but its 2.9 million count in 2010 still registers as a loss from its 3.1 million peak in 1970.  Gross Domestic Product growth from 2007 to 2010 has been, at 2.2%, generally average (middle quintile) —an impressive feat in light of Metro Cleveland’s pervasive population loss.  But average gains during a slow economic period scarcely compensates for significantly below economic gains during the relatively flush period of 2002 to 2008.

In short, Cleveland’s current socioeconomic trajectory obviates the need for significant amounts of the space at the Cleveland-Hopkins International Airport Terminal.  I’ve blogged in the past on how the significantly smaller airport of Woodrum Field (ROA) in Roanoke, Virginia recognized after September 11, 2011 that demands on airport security superseded those of managing enplanements, particularly when considering the near-calamitous drop in passenger traffic after the fateful terrorist attack.  As a result, authorities at ROA eliminated one of its six gates to make room for the enhanced needs of the Transportation Security Administration.  CLE has surely long since adapted to changing counter-terrorism measures, but it does not seem to have found a use for the tens of thousands of square feet in Concourse D for which it no longer has enough air traffic or passengers.  One can only hope that the airport’s authority, as a good steward of federal tax dollars, bears this in mind when pursuing capital improvements, as well as any long-term plans that account for the maintenance and use of this underutilized space.

While it is possible that future growth in metro Cleveland will once again justify the full use of Concourse D (or other excess space elsewhere in the terminal) to accommodate passenger demand, the current condition begs for a creative overhaul, in pursuit of an adaptive re-use of what is likely highly specialized, inflexible space.  Perhaps the airport’s leadership could consolidate commercial flights in the main portion of the airport (Concourses A through C) and D could serve as a freight hub?  The challenge is formidable, but presumably it is also painful to bear the cost burden of supplying an empty airport wing with security, custodial services, functional restrooms, full IT, telecomm, and electricity.  And with such modest foot traffic in even the active portions of the concourse, it’s only a matter of time before Sbarro and Subway could bail as well, if the current conditions worsen.  It will be interesting to see if a future of persistently fewer passengers at airports requires local authorities to seek advice from other property management agencies…such as those trying to breathe life in dying malls.

PrevPutting a gas tank in the heart of a neighborhood.
“Trash to treasure” writ large.Next

5 thoughts on “An airport’s hollowed halls.”