Impeded by byzantine zoning regulations, compliance with historic preservation standards, or anti-density community activists (aka NIMBYs), infill development is typically challenging enough to implement in an urban setting.  Auto-dependent cities in America—which are the majority—remain littered with parking lots wedged between two older, surviving structures that pre-date the car.  Those lots serve as a reminder of the venerable old buildings that once stood in their place.  When cars emerged as the primary means of getting around by mid 20th century, finding an easy place to park often became more critical to downtowns than retaining the buildings that had long been the primary downtown destinations.  Today, after much maneuvering and militant compromises from the original vision, developers have succeeded in filling in some of the gaps in the downtowns of the more economically healthy cities, particularly those that have recrafted their city centers as a hub for entertainment and fashionable urban living.

But what about the small towns?  Most of their downtowns suffered at least some of this spot demolition in order to accommodate car parking and to compete with the mega-markets that ran roughshod across the cheap land near the outer highway (Wal-Mart being the favorite culprit).  But only a select few of these small downtowns have enjoyed any sort of economic renaissance; even fewer have stimulated new infill development.  Will these towns ever fill in the gaps, and, if so, how?

The community of Oberlin, Ohio, about 35 miles southwest of Cleveland and with a population of 8,200, might offer a solution.  It seems to have defied conventions.  It’s not the seat of Lorain County, so it cannot ascribe to the Midwest prototype of a central courthouse square surrounded on all sides by commercial buildings.  But it does have an easily identifiable old commercial center. 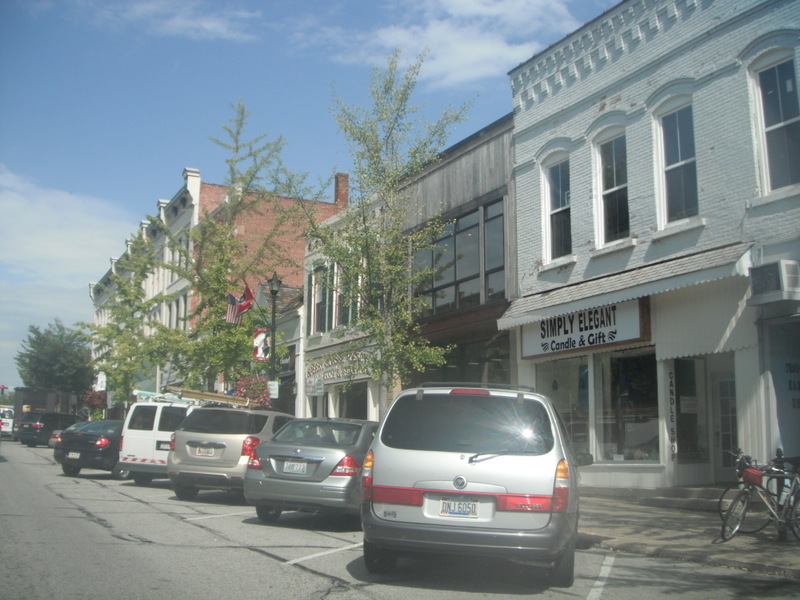 The shape of Oberlin’s downtown demonstrates another method by which it bucks the trends.  Unlike most towns of its size, it does not consist exclusively of a linear-oriented main street.  The map below highlights the presence of commercial buildings in the town, using the purple outline. 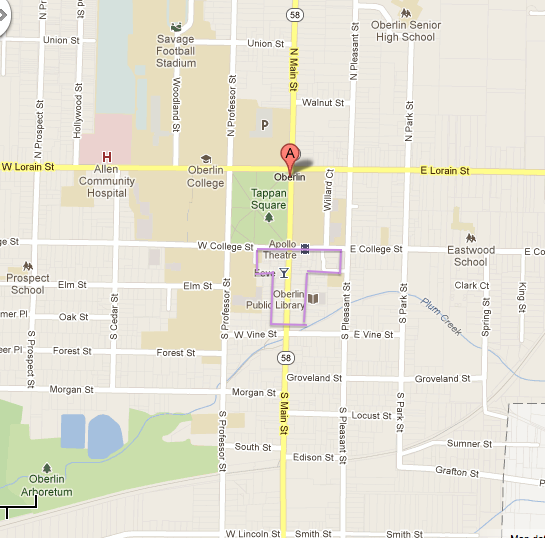 While the epicenter of Oberlin’s small downtown clearly sits at the convergence of College Street and Main Street, the configuration is unusual.  The commercial buildings like the one featured in the top photo do not spread evenly in each direction to form a cross or a plus sign; rather, the buildings only stretch to the south side of the College Street axis, essentially forming a T-shape.  One block of South Main Street contains commercial and civic buildings on both sides of the street, as seen in the photo below: 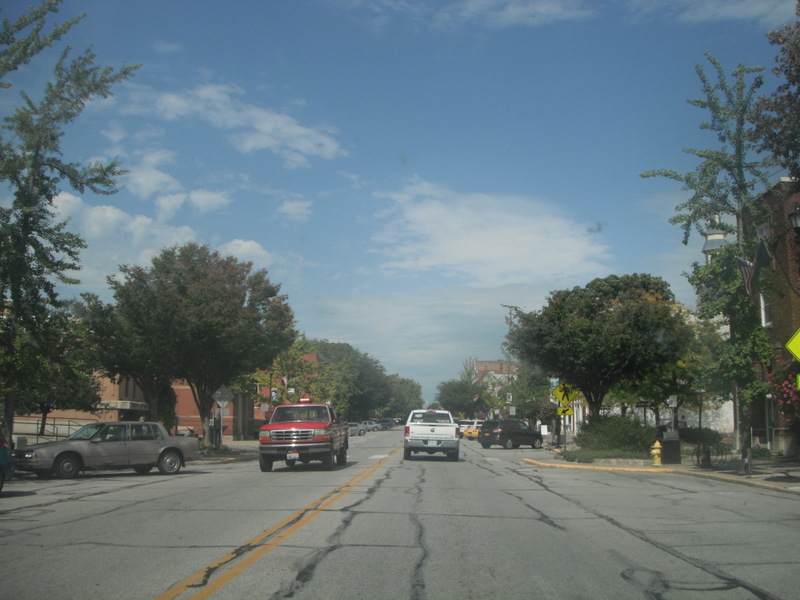 Meanwhile, College Avenue’s commercial corridor only rests on the south side of the street, which includes buildings such as these: 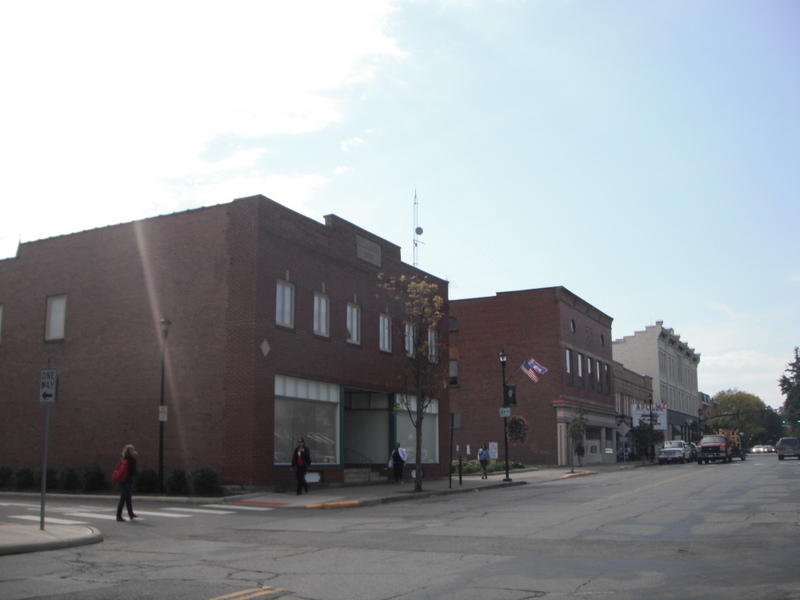 But a pivot to the northwest at the intersection of College and Main presents the following view: 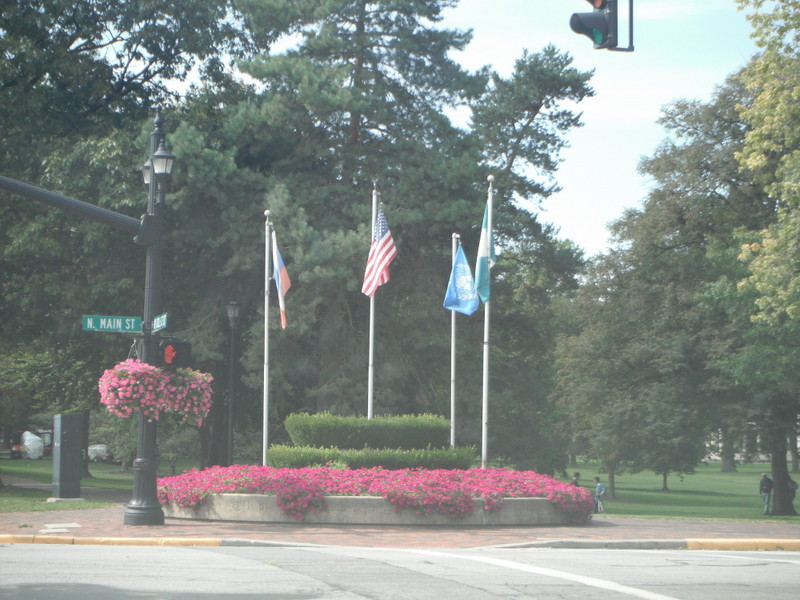 It’s Tappan Square, a centrally located park.  The Google Street View provides a wide-angle perspective which shows the main-street typology depends exclusively on one side of the street.  It wouldn’t be the first pedestrian-oriented commercial corridor to succeed despite a lopsided axial development pattern: Bexley, Ohio, which I explored extensively in the past, features a thriving commercial artery on the north side of East Main Street and, along much of the south side, the greenery of Capital University.  So does Nassau Street in Princeton, New Jersey, from where I have written much of this essay: the north side is a very upmarket retail district; the south side is Princeton University’s primary campus.

If isn’t obvious already, Oberlin’s tiny downtown offers a similar dichotomy.  In this case, the north side of College Street hosts the campus of Oberlin College, the esteemed liberal arts school that assures this municipality a high-profile cultural role belying its small size.  And single-loaded commercial corridor phenomenon might also explain this streetscape about a block east from the town’s core intersection, along College Street: 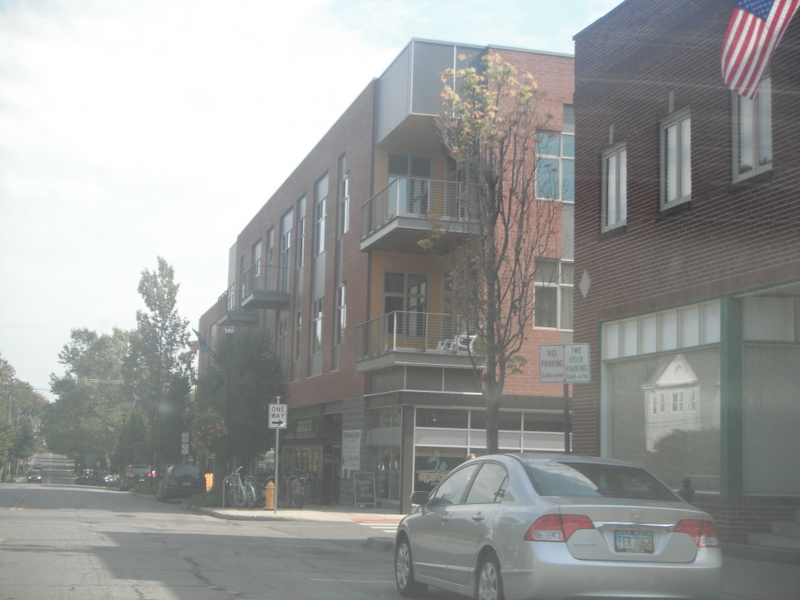 The building in the center of the above photo caught my attention, because it was clearly much newer than the adjacent building (to the right in the pic), as well as pretty much every other building in Oberlin’s central commercial “T”.  What was its story?  I made my first assessment based on its appearance alone.  As buildings in downtown Oberlin go, it’s big. 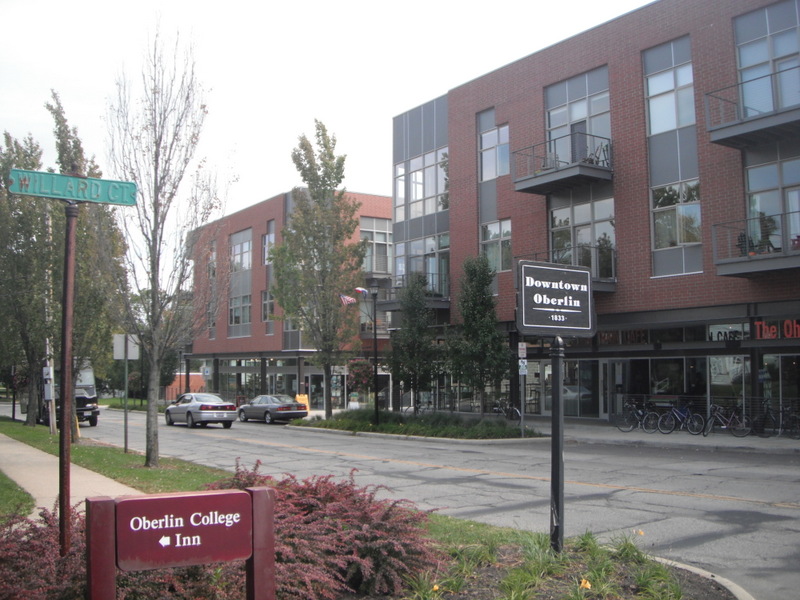 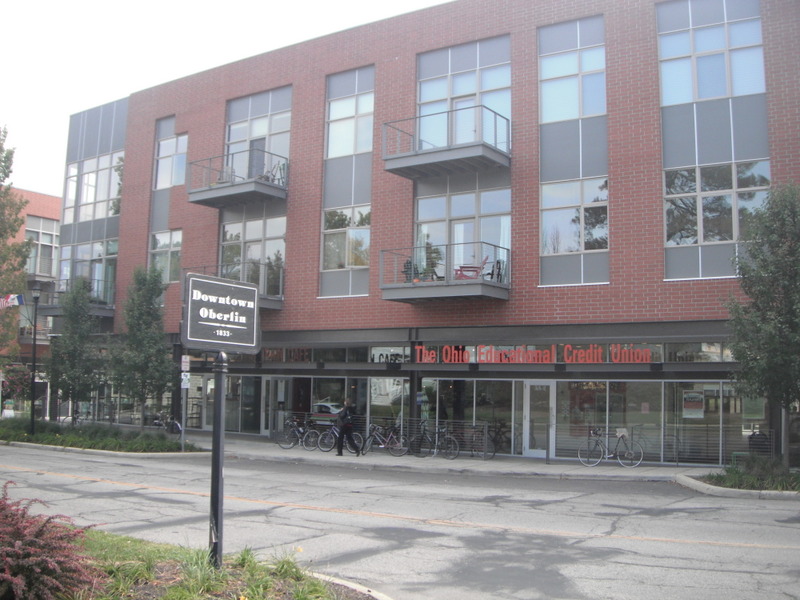 It smartly abides by the urban design typology of its kindred downtown buildings, encouraging retail on the ground floor through the accommodating fenestration, while reserving upper floors for other uses.  The photos above confirm the considerable width of the building along the College Street frontage, but it extends southward as well: 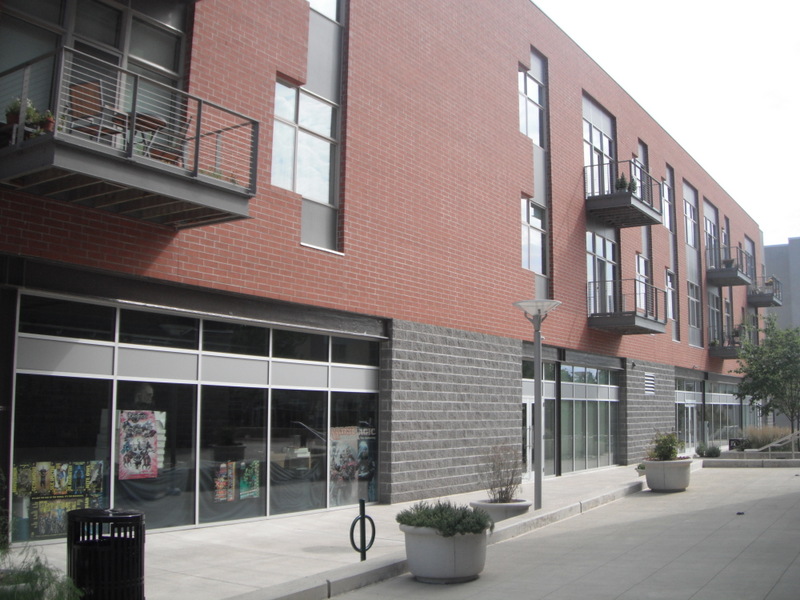 The back of the building could easily have assumed the obvious butt-end function reserved for parking, mechanics, or garbage collection, all presided over by a featureless wall.  But it doesn’t. The architects have programmed the alley space behind the building into an interior courtyard. 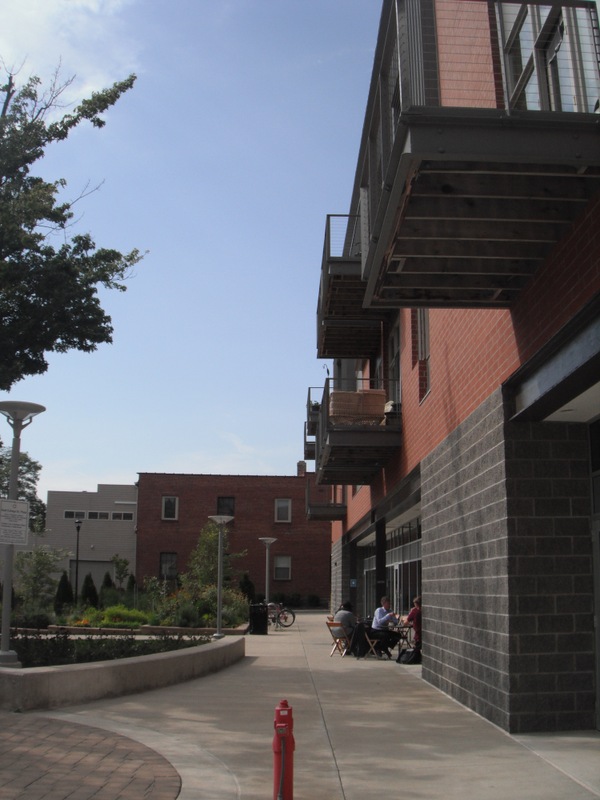 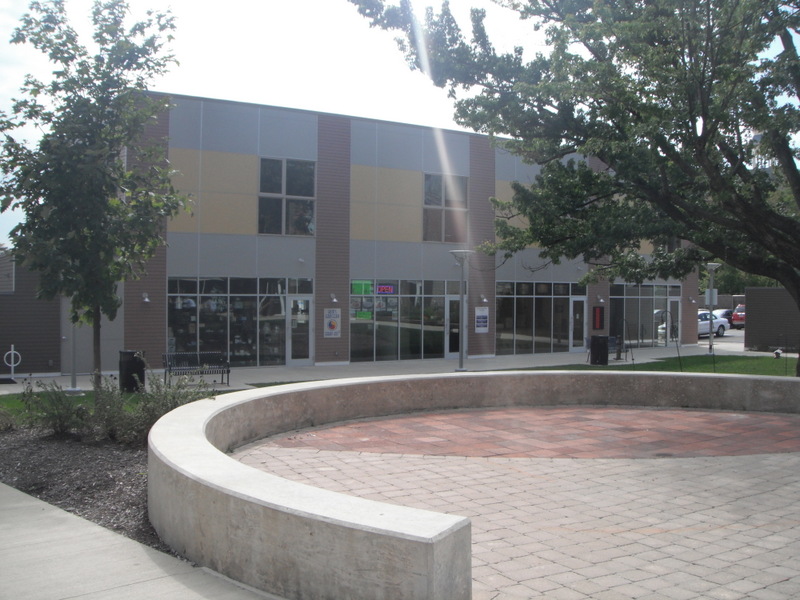 A smaller, ancillary building featured in the second of the two photos helps enclose the space, shielding it from the unsightly parking lots that predominate the backsides of neighboring buildings, like this example: 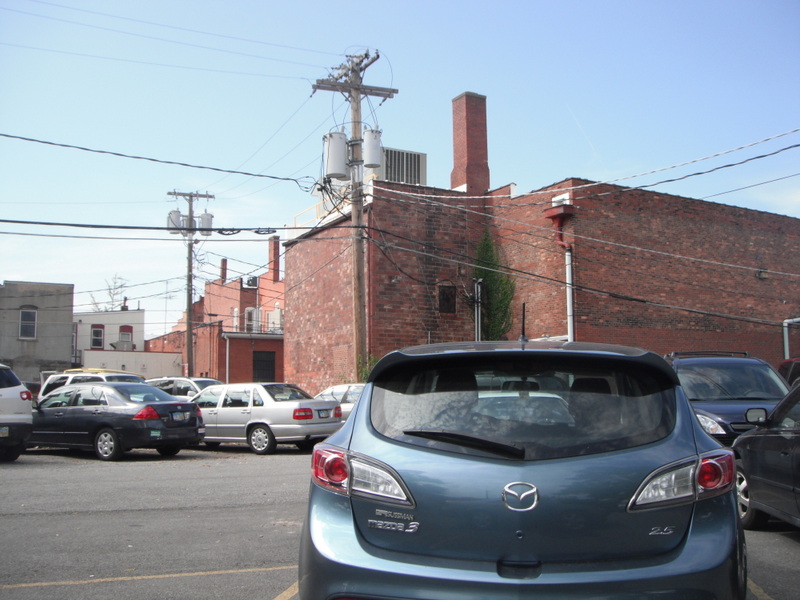 I also appears that the designers have cushioned the space between the sidewalk and the street with some enhanced landscaping. 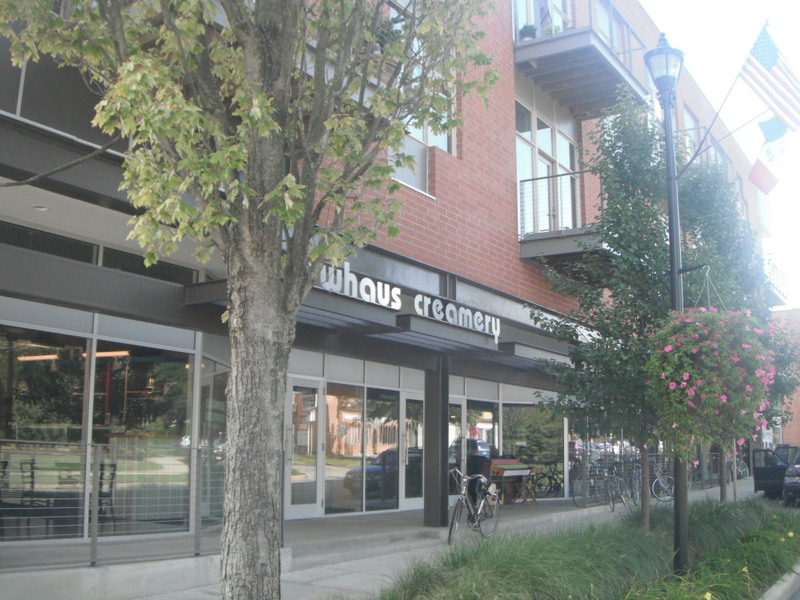 Judging from those thick thirsty grasses, the greenery here should help capture and absorb stormwater runoff, putting it to more productive use than in the municipal storm sewers and preventing it from flowing back to the watershed in a more polluted form.  The landscaping offers both street-level aesthetics and an environmentally sensitive alternative to all the paved imperviousness around it.  Lastly, the building’s retail frontage seems to welcome bicyclists… 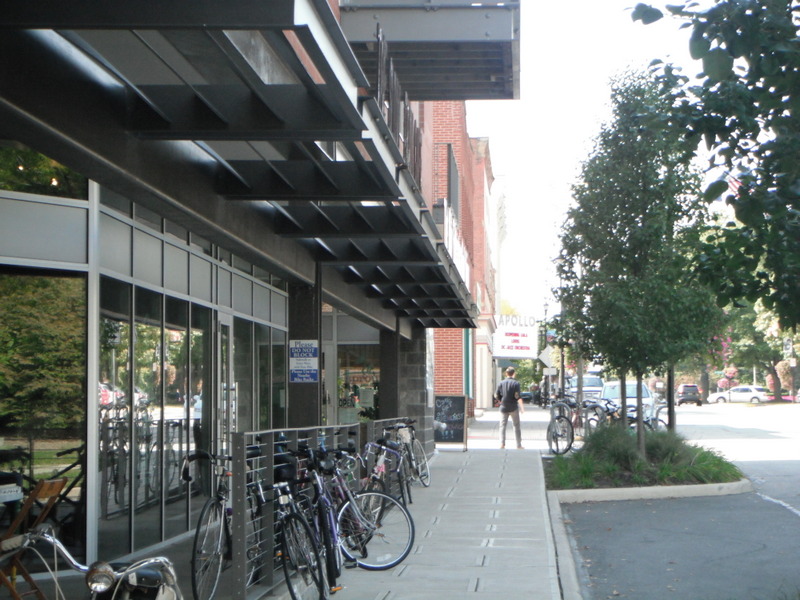 …though perhaps still not quite enough, since the myriad bikes parked on the day I visited almost evoked Copenhagen more than an American college town.

From my own non-expert evaluation, this is a smartly designed complex, not out of place in a trendy district of a major metropolitan area.  But somehow it ended up in little Oberlin.  And, to top it off, it is obviously an infill project.  I patronized Café Sprouts, a vegan deli, bakery and juice bar on the first floor, to see if I could get more information.  One of the employees informed me that the site had hosted a drive-thru Rax Roast Beef restaurant in the past, but it had been vacant for years and had reduced that arm of the downtown “T” to a dead zone.  The current Google Street View, from September 2008, perfectly captures the “before” vision, when site planning for the infill development had just begun.  The employee also pointed me to a sign I had up to this point somehow overlooked: 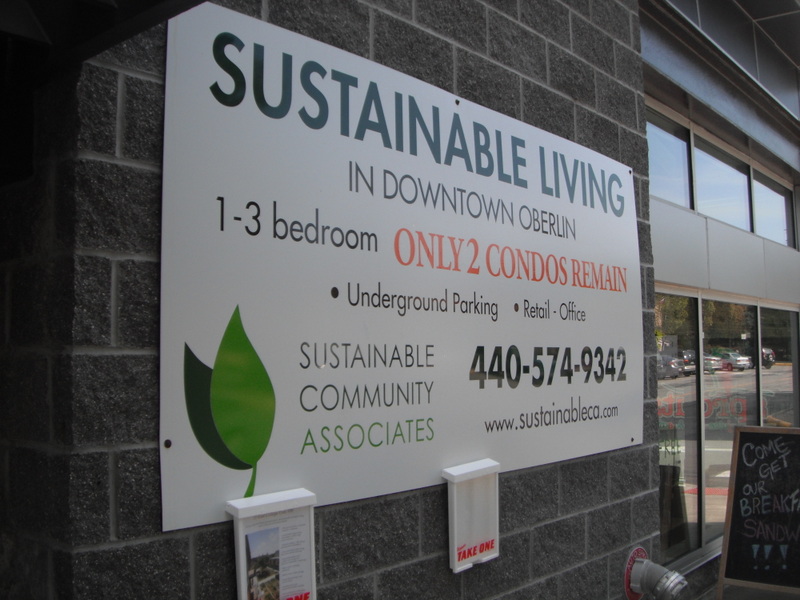 This told me everything else I needed to know.  It took no time at all to find a bevy of articles, such as this one, to get even more background on the project.   Three relatively recent Oberlin grads formed a development partnership called Sustainable Community Associates just blocks from their alma mater.  Their goal was to inject life into a long dormant corner of downtown with a high-density, mixed-use, mixed-income development that also employed environmentally sustainable practices.  The $15 million result, with 33 condos and 20,000 square feet of retail, is seeking LEED-Neighborhood Development Gold status and hopes to stimulate further densifying infill in Oberlin where the opportunities arise.

Needless to say, I was taken by this project, which I had inadvertently stumbled upon during an impromptu first-time visit through the town.  It’s enough to marvel at how it achieves a superior urban design configuration to 90% of the new developments that have taken place in my hometown of Indianapolis in recent year.  (To an extent, that is a subjective judgment call on my part.)  What’s less open for dispute is that such infill is virtually unheard of in towns of Oberlin’s size.  Surrounded by cornfields in all directions, it is close enough to Cleveland to fall within the metropolitan area, but still too far to qualify as a suburb or even a reasonable exurb.  But the town owes most of its idiosyncratic character to its adjacent college, whose history of left-leaning political activism competes broadly with its reputation for academic excellence.  While it certainly helps that the brains behind Sustainable Community Associates went to school there and no doubt forged strong connections to the community, it’s not every Ohio town that can muster support for a sizable new LEED certified building, let alone one that accommodates bicycles more visibly than cars.  But most small towns in Ohio also wouldn’t support a vegan bakery/juice bar called Café Sprouts.

The symbiosis between the developers and the small, like-minded community helped transcend zoning stipulations or not-in-my-back-yard obstructionists.  It is hardly surprising that college towns like Oberlin, regardless of their size or the character of their rural purlieus, often prove the most successful laboratory for experimentations in infill.  They might offer a smaller canvas on which to operate, but they generally benefit from a more homogenous population and a smaller artillery of regulations to thwart the savvy designers’ visions.  I am fully confident that another five years will introduce to Oberlin a similarly chic infill project.  And I won’t be at all surprised if I find a Kabbalah Center in the retail on that first floor.

PrevThe state house makes the laws; the state takes it for granted.
MONTAGE: Stratification across the river.Next