Reviving with the wave of a wizard’s wand.

Earlier this past fall, I featured the accomplishments of the City of Kokomo, Indiana in reinventing itself over the past few years, after two decades of rust-belt, deindustrialized stagnancy.  Civic leadership successfully elicited a certain degree of buy-in among its constituent, all toward sundry capital improvements, the likes of which most similarly sized cities still only retain on their wish lists.  The results are conspicuous.  Kokomo has made formidable strides in infrastructural improvements, mass transit, downtown revitalization, park expansion, public art, and an ambitious International Baccalaureate exchange program at the public schools—all while maintaining a balanced city budget.  According to some of the city’s cheerleaders for these expenditures, the overall ethos driving the city is far more upbeat than it has been in years, despite the fact that, as recently as 2008, Forbes listed the city as one of America’s fastest dying towns.  Perhaps that article served as a wake-up call, because I’d be hard-pressed to imagine that recent visitors to Kokomo’s downtown would ever see the city as dying—certainly in comparison to dozens of other similarly sized cities across New York, Pennsylvania, New Jersey, Ohio, Michigan, and Indiana that show little to no evidence of revitalization at work.

The combined impact of these upgrades is inspiring.  But none of them (with the possible exception of the International Baccalaureate exchange) is particularly groundbreaking.  Virtually every city these days has attempted revitalization through a certain combination of sculptures/murals, streetscape improvements, heritage pedestrian/bike trails, new parks, et cetera et cetera.  These initiatives seem to come from a City Planning 101 playbook.  It’s as though cities have completely taken the bait from the many national assessment tools created by various urban advocacy nonprofits in order to gauge quality of life.  At the same time, the advisory committees that operate these organizations (and thus create their highly subjective definitions of “quality of life”) consist overwhelmingly of city planners and their lobbyist allies, cajoling municipalities to eat out of their hands in a manner that smacks of self-aggrandizement.  To put it more simply, cities like Kokomo strive for (and ultimately invest in) bike lanes, mixed-use trails, or omnipresent bike racks, all in order to achieve and flaunt that bronze rating from the League of Bicyclists, which in turn wins free publicity for itself in the process.  I cynically alluded to this practice in Baton Rouge a few years ago.

I’m not trying to undermine or belittle these practices, nor do I mean to pick on the League of American Bicyclists’ worthy mission.  And the initiative that Kokomo has shown these past few years is commendable—and the city has usually implemented these upgrades far more smartly than one might see in a larger city like Indianapolis.  But the standards for what constitutes a “livable” city seem to grow more uniform and homogenized with each passing year that these standard-bearers of good urbanism grow in influence.  The remedy for economic malaise increasingly seems to be the same everywhere, like a doctor who prescribes cod liver oil for both arthritis and malaria.  So it is with no small fanfare that I declare how happy I am that a local entrepreneur in Kokomo has marched alongside the corps of revitalizers, but to his own beat. 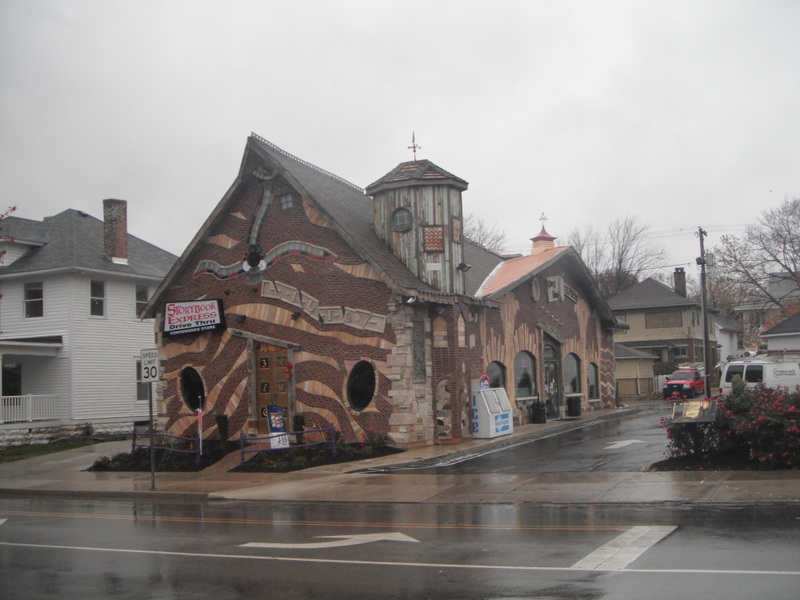 This whimsical structure, known as Storybook Express, opened in 2012 at a long-vacant site at Sycamore Street and Apperson Way, just a few blocks from the Howard County Courthouse.  Although it’s a convenience store, the unconventional, fairytale appearance has prompted locals to christen it the “Harry Potter house”.  Even from a distance, the building’s densely ornamented façade and off-kilter massing and brickwork help distinguish it. 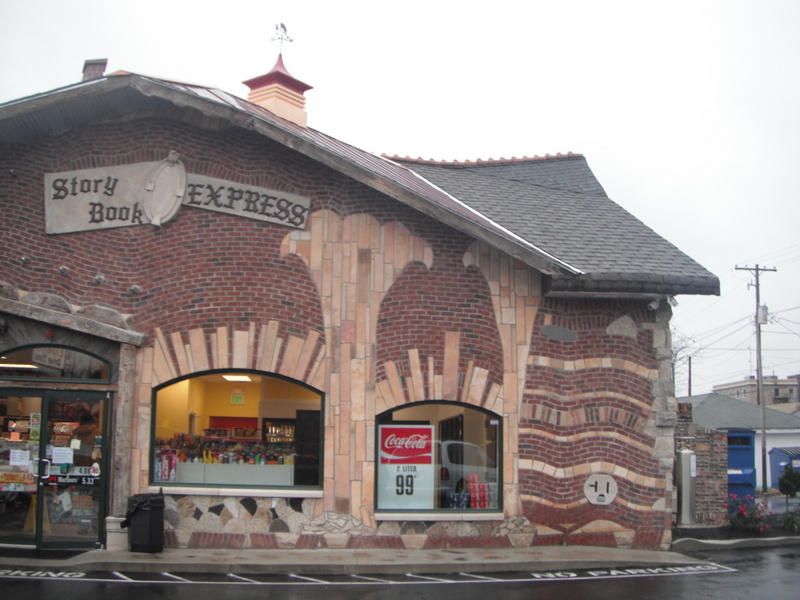 But a closer look reveals the devil-may-care insertion of neglected or discarded antiques into the masonry: 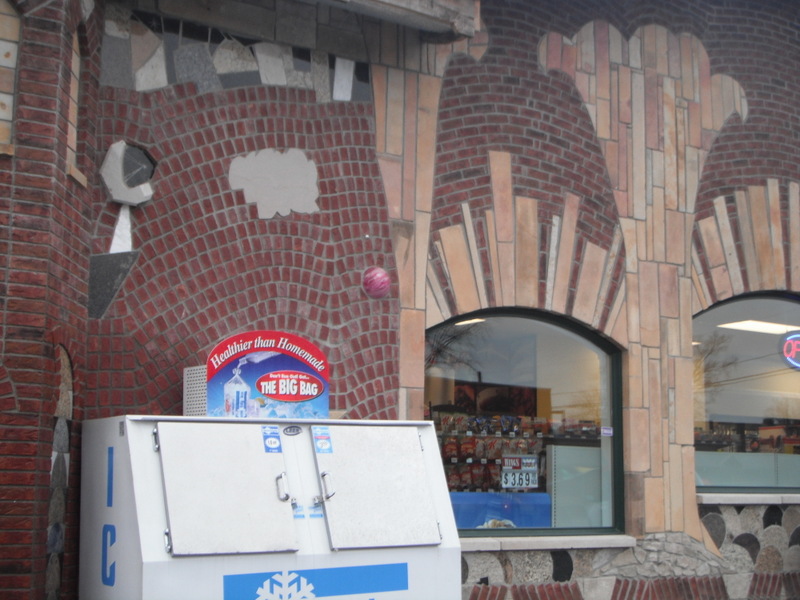 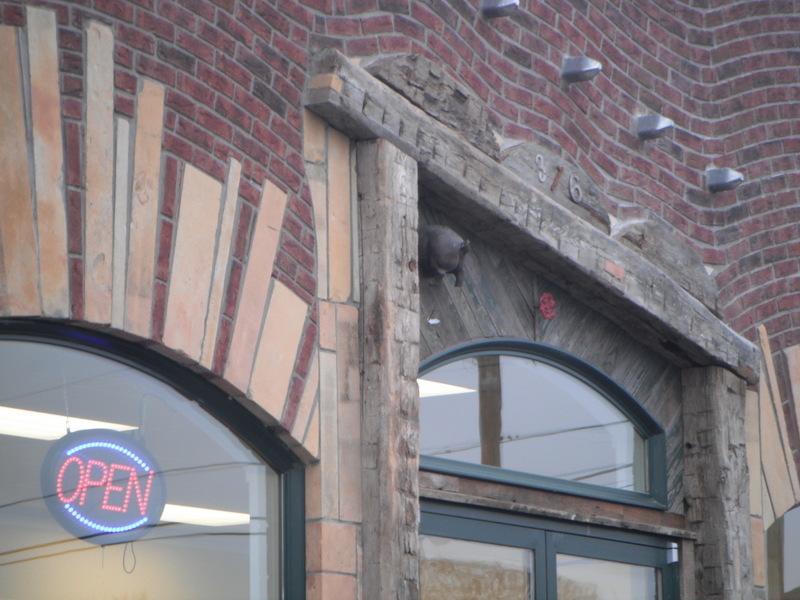 Notice the metal pig’s derriere rammed into the wood just above the transom window.

More often than not, eye-catching façades such as these are a total bust when viewed from less prominent angles.  The designer puts all the mojo in the front view.  But Storybook Express includes just as much eccentric detail on the backside as well: 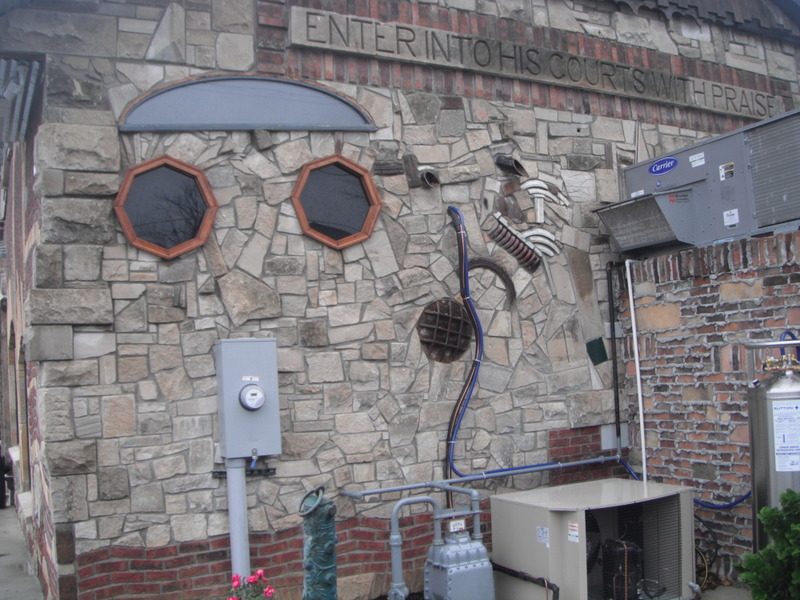 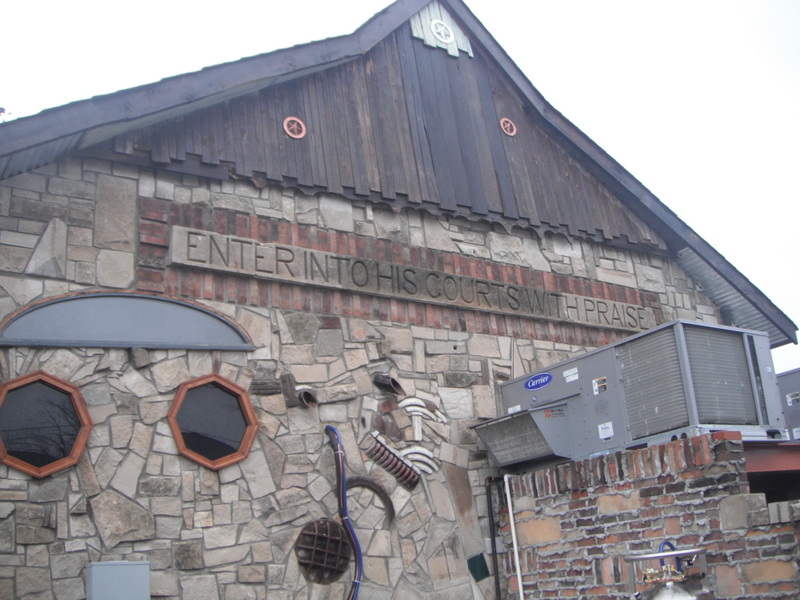 An old church inscription, a car’s suspension coil, antiquated plumbing, and other unidentifiable bric-a-brac enhance the façade’s visual interest.  Even the relatively conventional brick wall, used to elevate and protect the convenience store’s HVAC equipment, deliberately employs an excessive amount of mortar to enhance the multi-dimensionality.  Look how it oozes from between the bricks. 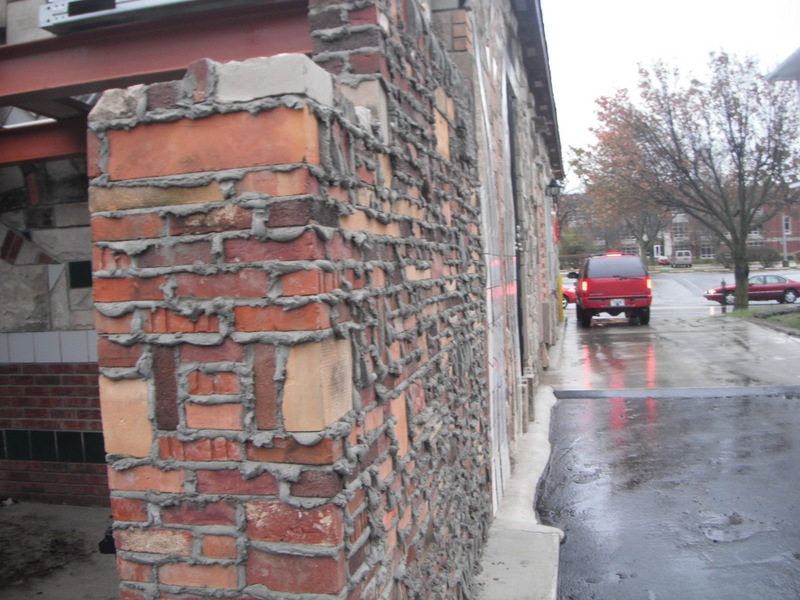 The western wall is equally whimsical and boasts the added benefit of a drive-thru window, a relatively uncommon feature in convenience stores. 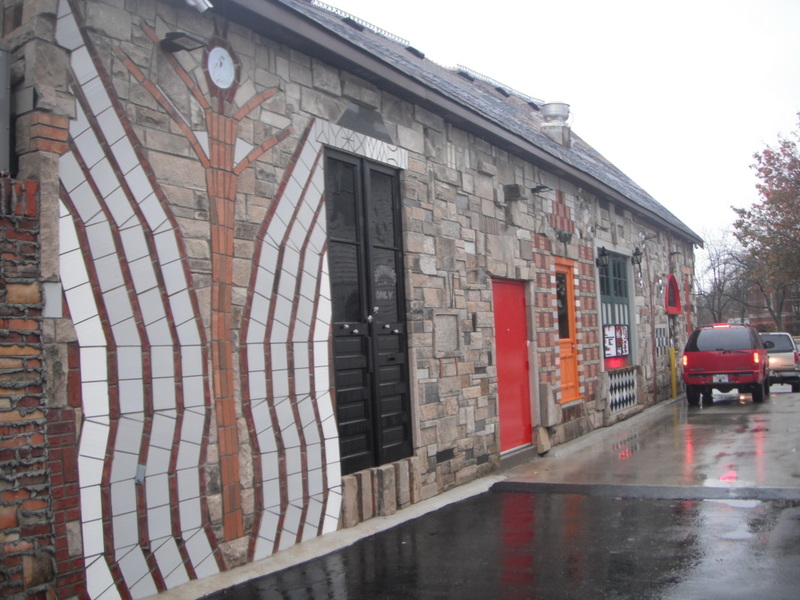 But I have to confess that my favorite detail is the parking lot, mainly because it would be so easy to settle for drab convention.  But the brains behind Storybook Express allowed the whimsy to permeate the entire design.  The retaining wall adheres to the same pastiche as the masonry: 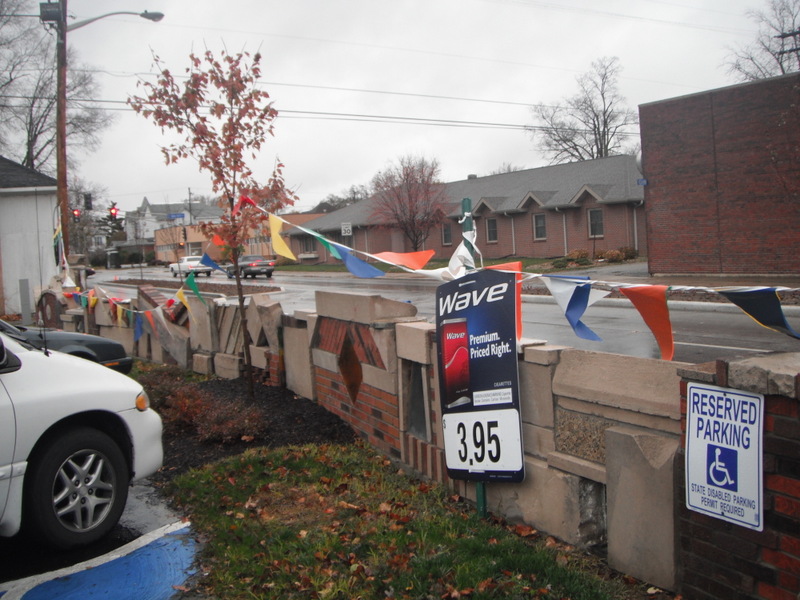 And it takes real chutzpah to employ an unconventional striping for a parking lot, a practice that in many cities would require special approval: 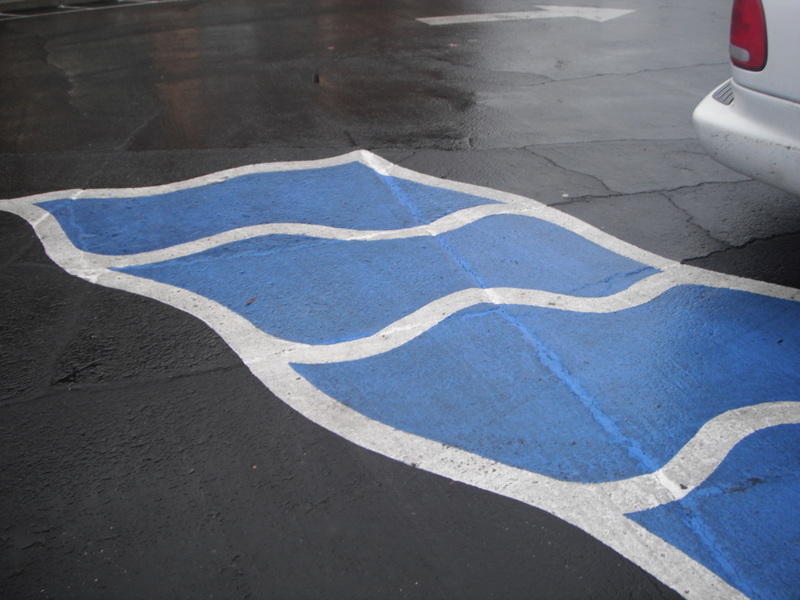 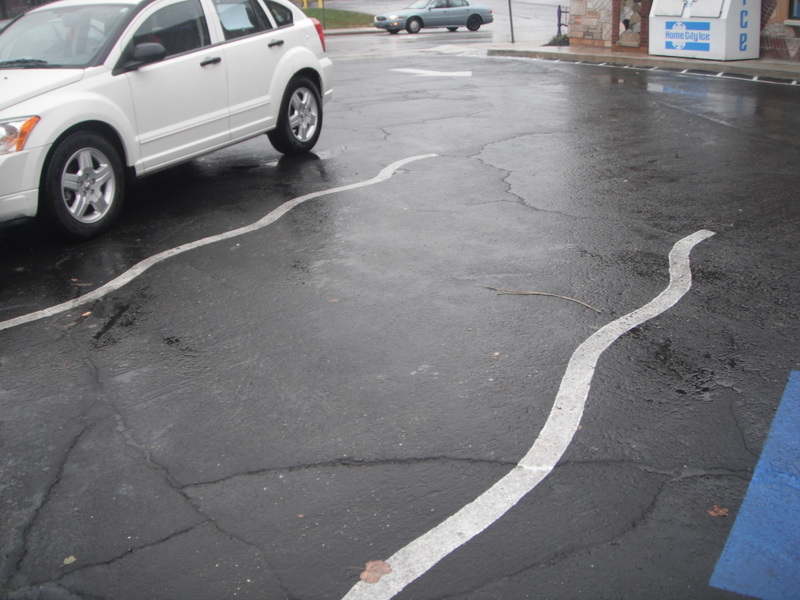 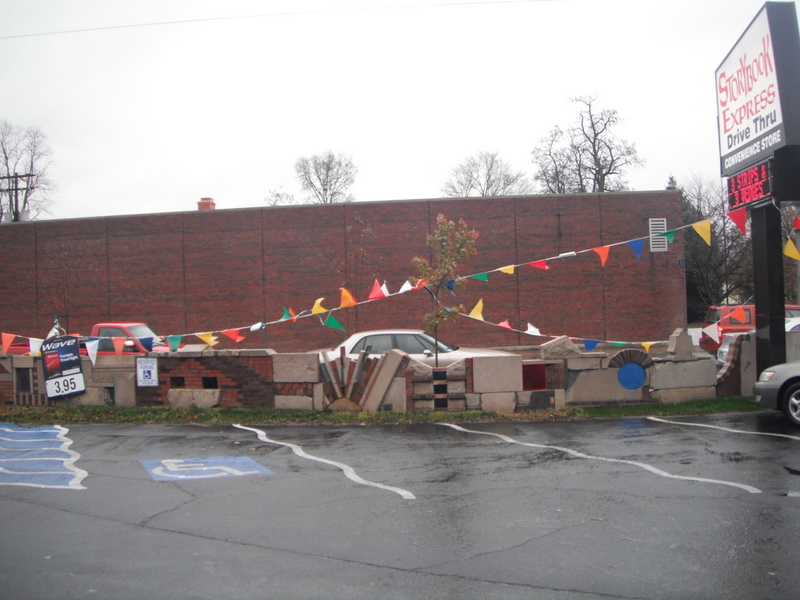 Storybook Express would easily qualify as a great roadside curiosity even if it sat in isolation.  But it is the culminating achievement of Fortune Management, a local real estate development firm with holdings throughout the city, including a few other developments in a similar vernacular.  I found one of these other curiosities on my own, at Markland Avenue and Calumet Street. 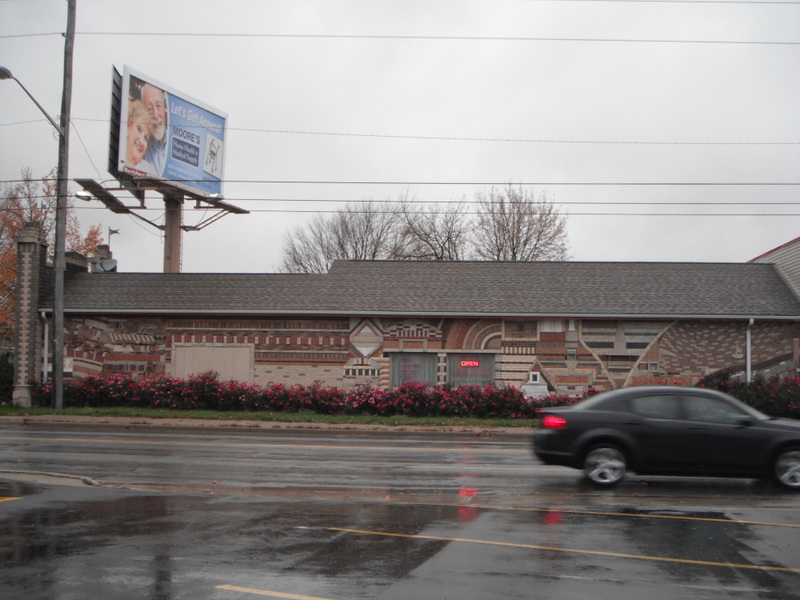 This structure, dating from 1999, hosts a nail salon. 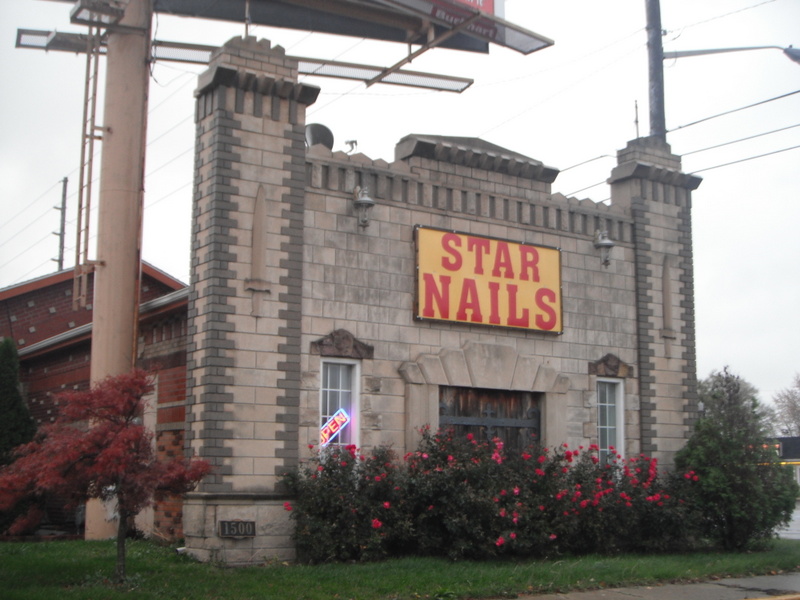 Like Storybook Express, it applies the fanciful masonry mixed with assorted folderol on all four sides. 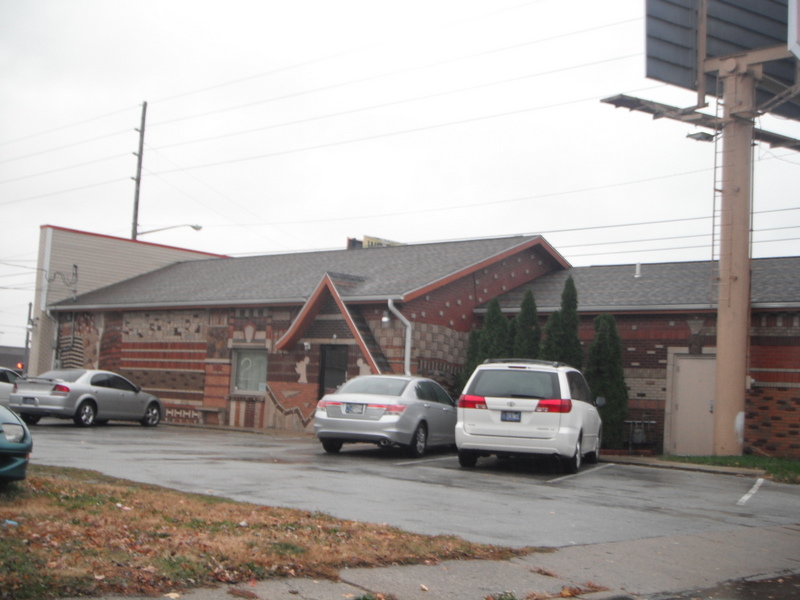 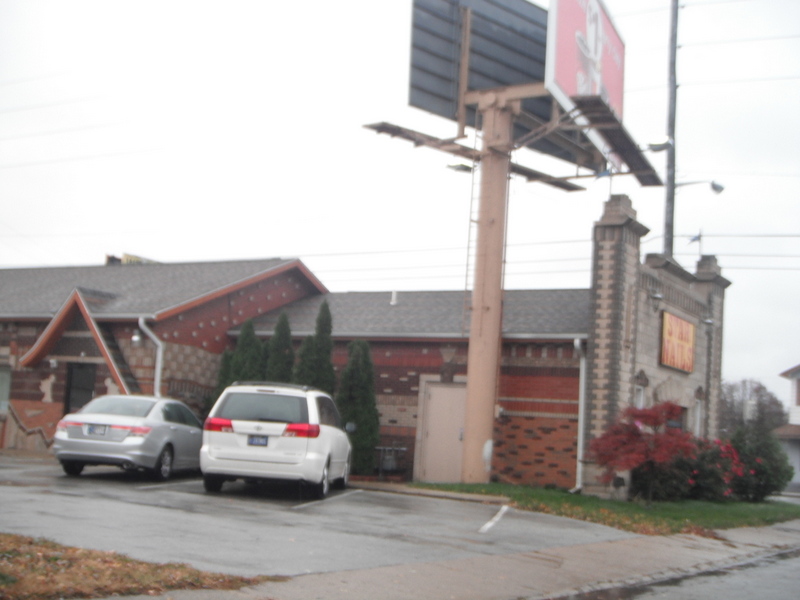 Digging back a bit further in time, Fortune Management adapted some brownfield sites into office space.  The property at Markland and Washington previously hosted a transmission repair shop that had clearly seen better days: 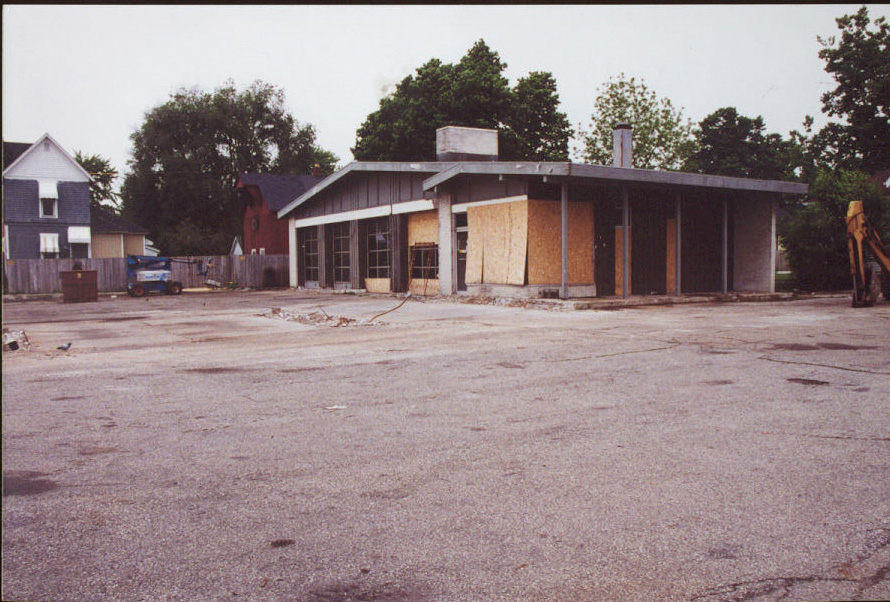 In 1995, Fortune Management transformed it into this: 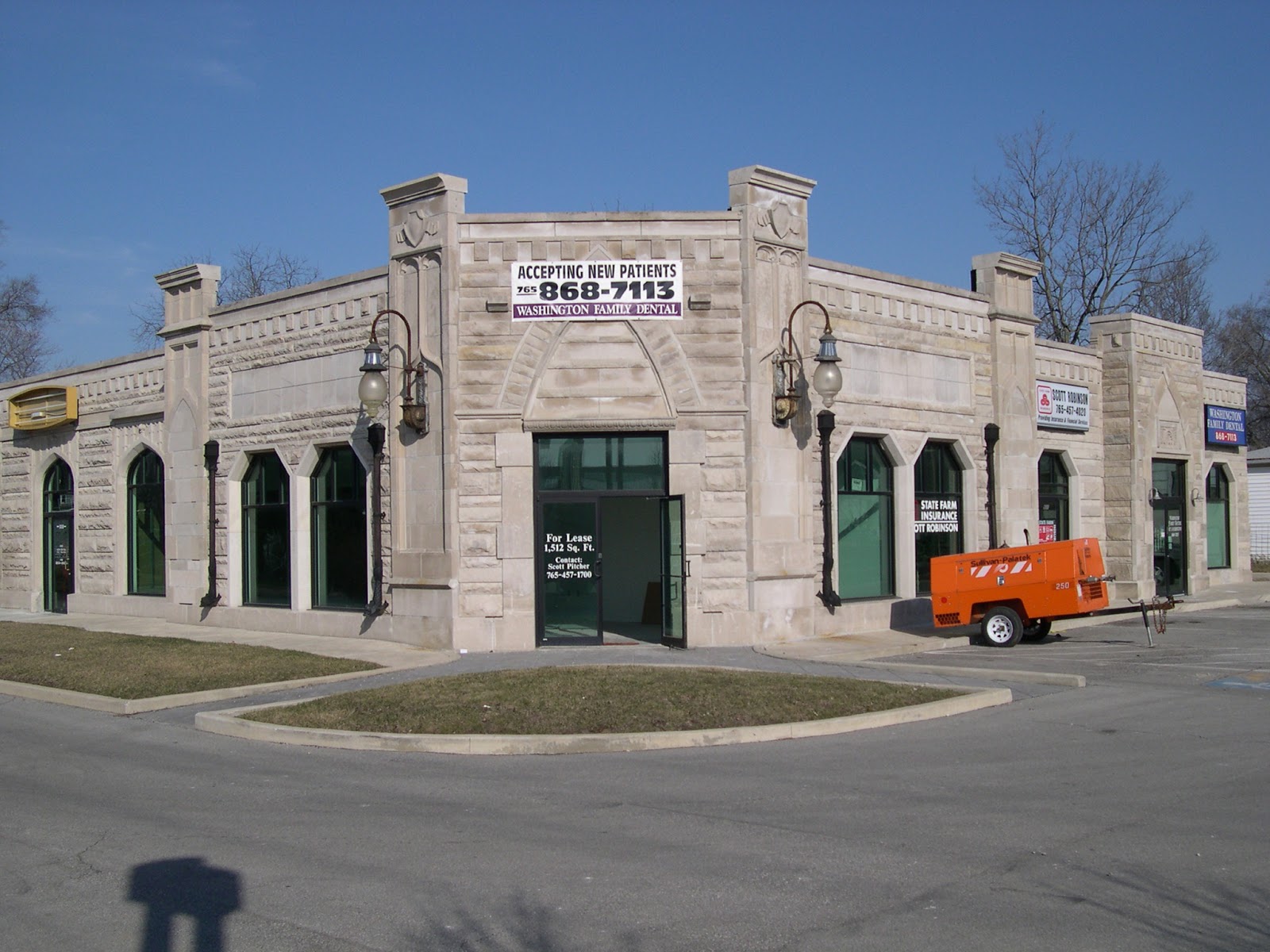 And the company pioneered this aesthetic with a Shell Station at Sycamore and Washington, way back in 1987.  Before the redevelopment, it looked like this: 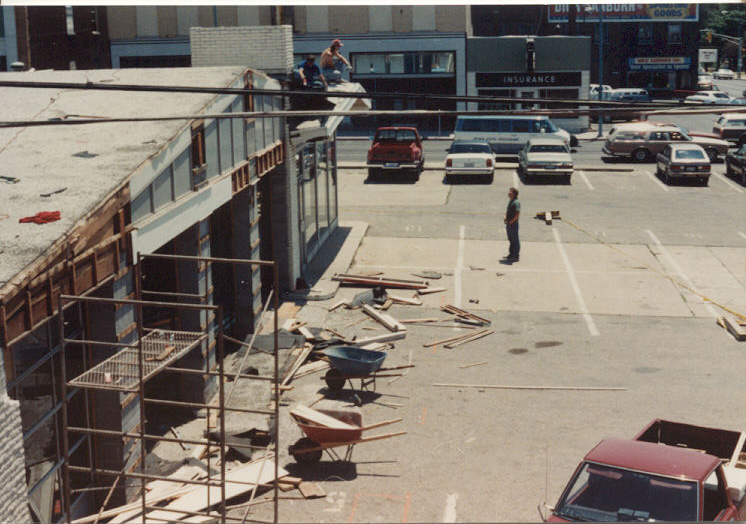 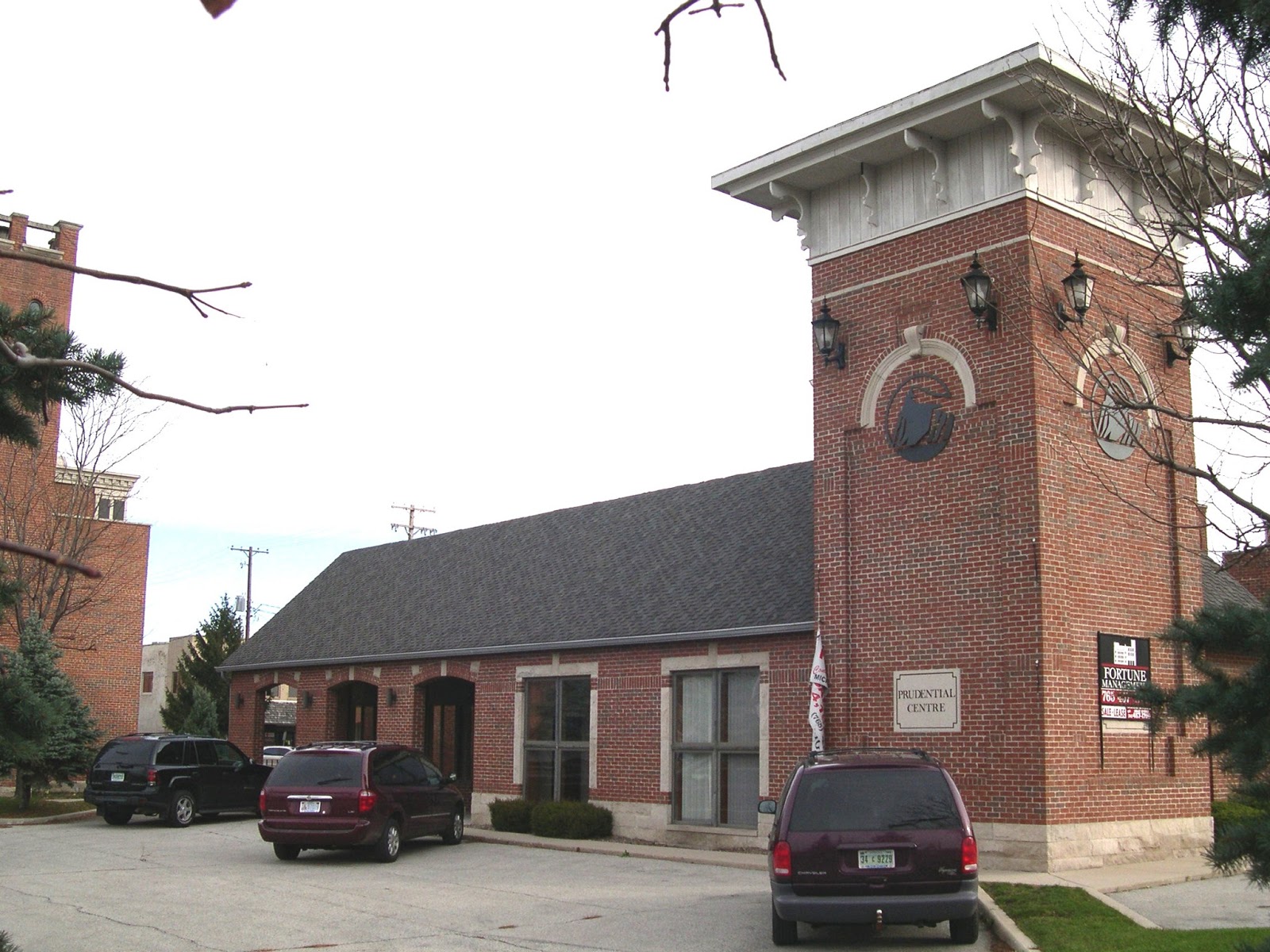 These earlier efforts may appear less ostentatious than the convenience store downtown, but they ascribe to the same spirit in their design.

A recent interview with Fortune Management’s president, Scott Pitcher, helped shed some light on his rationale.  The firm has purchased and renovated over 50 properties in the Kokomo area since its 1982 founding.  Pitcher’s goal, even for the less fanciful redevelopments, has been to employ high-quality materials from the same time period as the original structure.  More often than not, Fortune Management has rescued materials from other buildings under demolition in Kokomo other various Indiana.  Not surprisingly, the Storybook Express convenience store featured in the first photos series was new construction on a lot that the company had held in its portfolio for years.  Although not a renovation, it nonetheless consists primarily of repurposed material, while the customized roof exclusively employed Kokomo craftspeople. 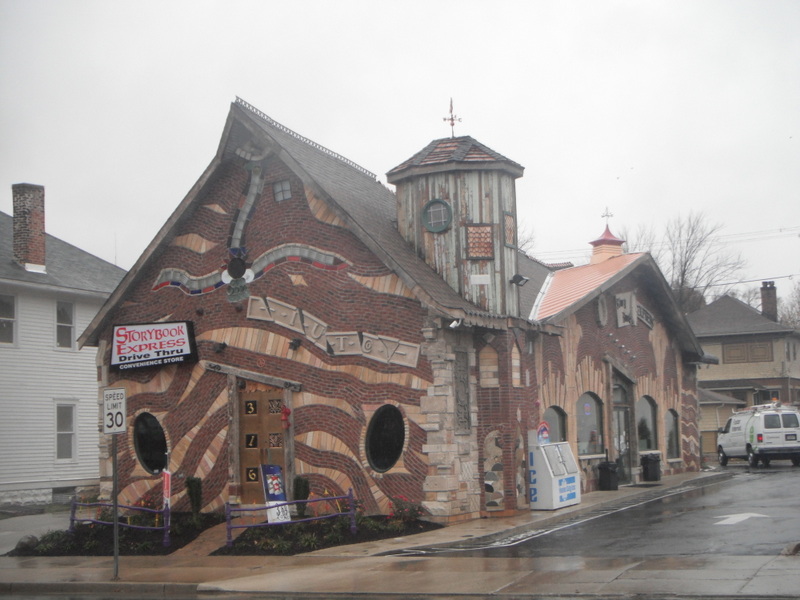 The ostensible “Harry Potter” references are a throwback to a legitimate Storybook architectural style in vogue during the 1920s in Hollywood.  Despite the recession, the time finally seemed right a few years ago for Pitcher to begin developing Storybook Express in order to capitalize on the other revitalization efforts that had taken place in downtown Kokomo.  He partnered with a local entrepreneur who was interested in opening a convenience store at the site, and though it was inevitable that it would require parking, the structure still engages Sycamore Street with a very small setback, allowing the structure to accommodate vehicles and pedestrians in nearly equal measure, as the somewhat blurry photo below still demonstrates: 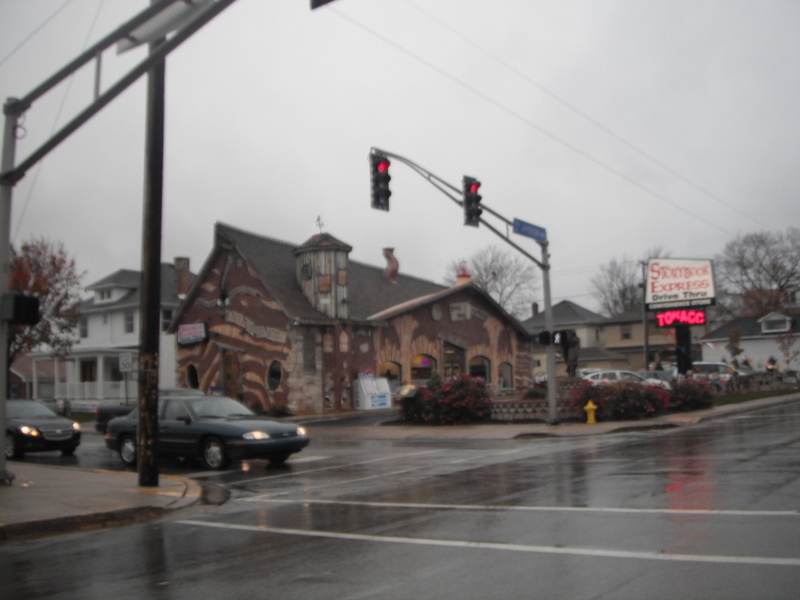 What motivated Pitcher and his team to try this style?  These sundry developments seem inspired by both a love of vintage Hollywood movie sets as well as the plundering of small-town antique shops, though they have also achieved statewide recognition for persistent use of local material, winning an Indiana Green Business Award in 2010.  At the same time, I see little evidence in Pitcher’s work that he was striving for broader recognition in the architectural or artistic community.  He wasn’t trying to impress the New York art scene; he built this way because he felt like it.  I shy away from the dubious label of “folk art” because it carries with it a whiff of condescension—that folk artists are uncouth autodidacts who remain ignorant of the preferred aesthetic standards and mores of the time.  Pitcher knows exactly what he’s trying to achieve, but Storybook Express and its cousins have flourished despite being untethered to any broader cultural barometer.  For me, the DIY framework by which these buildings came into being can’t help but recall the work of Philadelphia artist Isaiah Zagar, who for decades has charmed his neighborhood through colorful mosaics and found-object installations superimposed onto various buildings.  The vast majority of Zagar’s corpus remains concentrated along South Street and the adjacent blocks, such as the examples below: 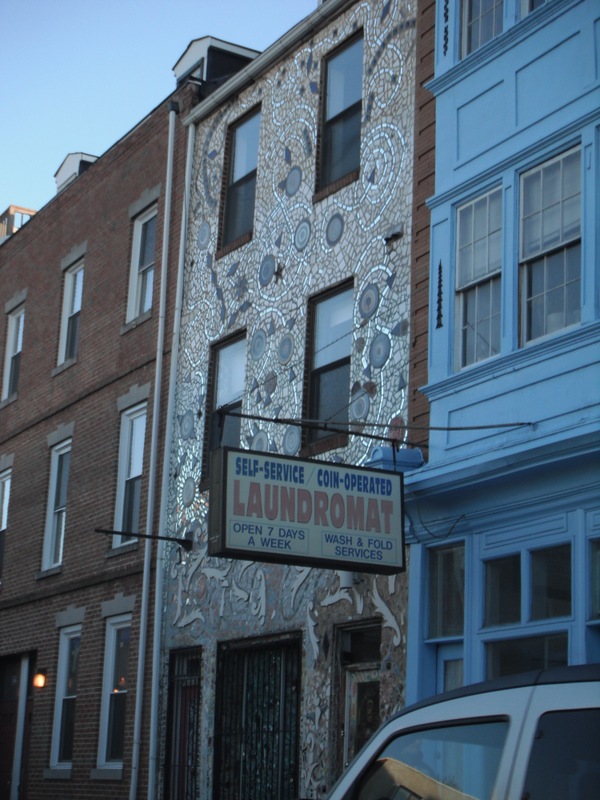 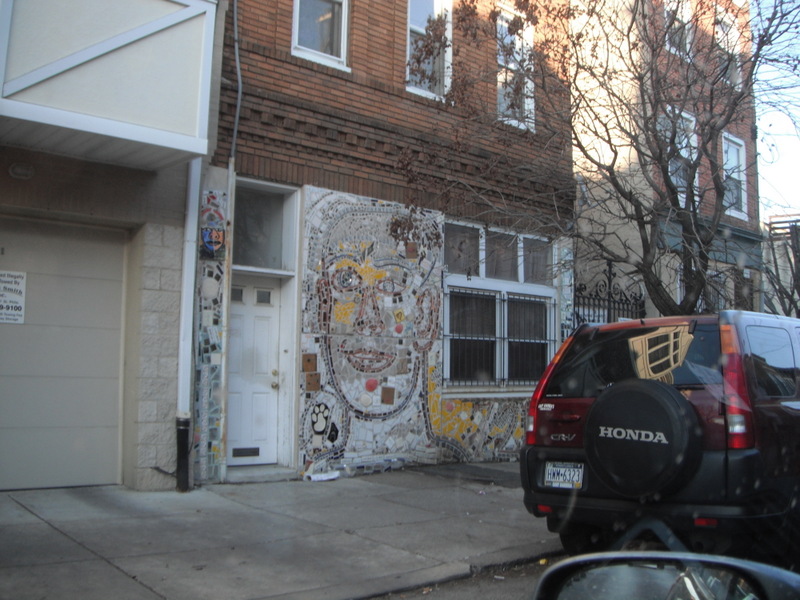 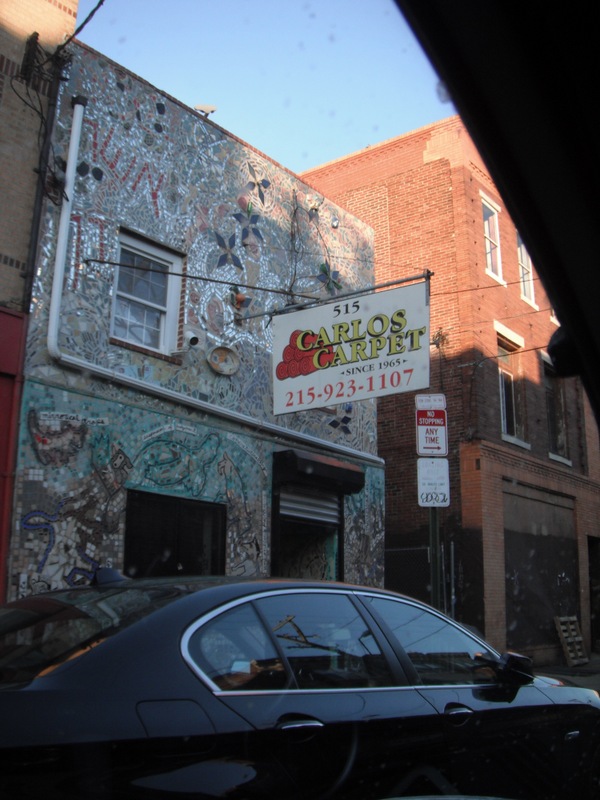 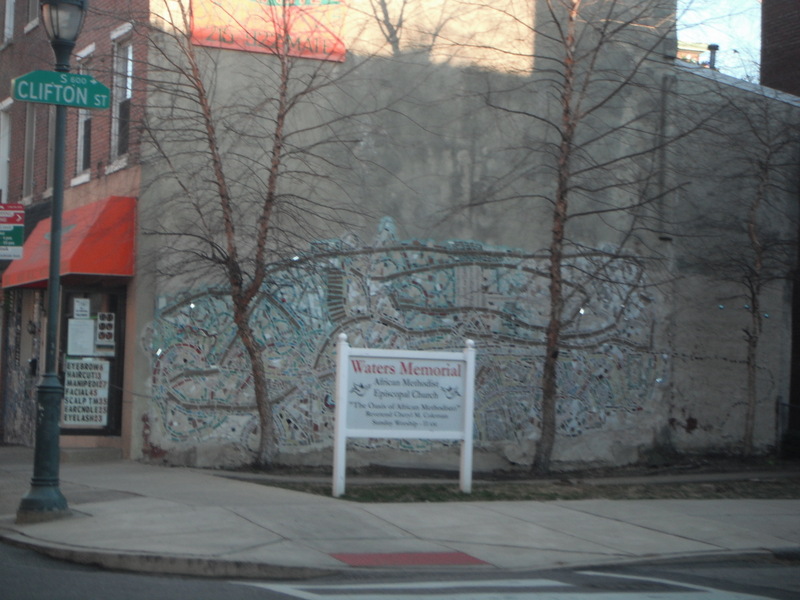 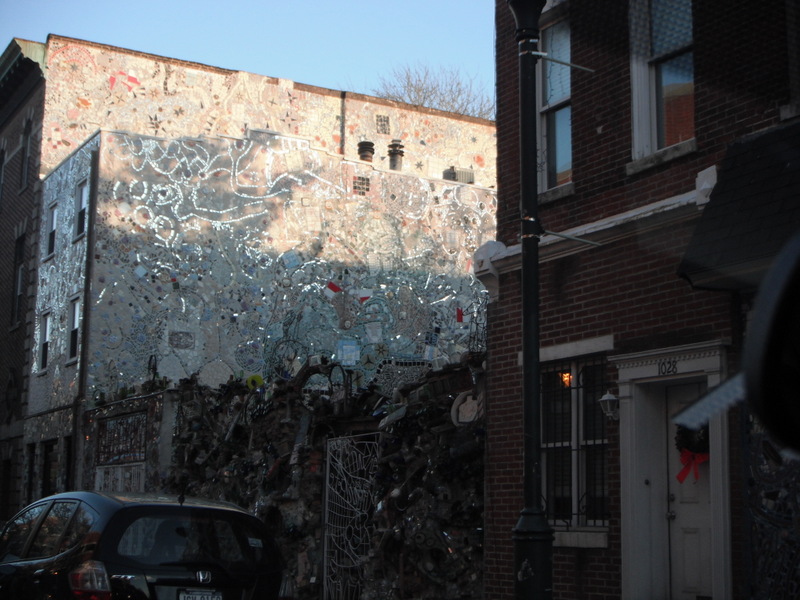 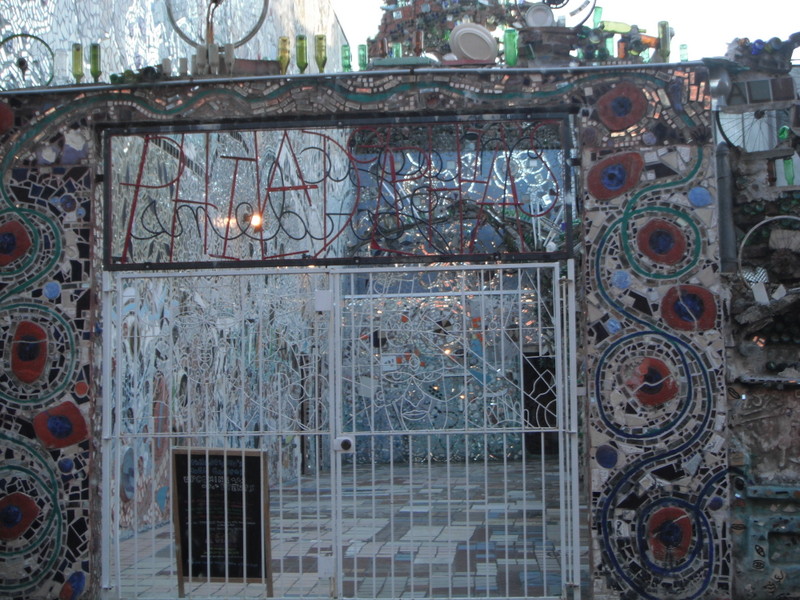 Obviously Scott Pitcher and Isaiah Zagar aren’t entirely kindred spirits: Zagar self-identifies as an artist and Pitcher is first and foremost a developer.  And while Zagar’s most widely recognized artistic output polka-dots the various workaday streets of South Philly, his work also sits in the permanent collections of art institutions both inside and outside of metro Philadelphia.  Nonetheless, Zagar has admitted his affinity with folk and visionary artists from across the globe, and he doesn’t hesitate to identify as a “vernacular artist” because the majority of his corpus thrives from decades of embedding himself in the community he loves, rather than responding exclusively to the dictates of specific commissions.  Pitcher, meanwhile, has indicated that any new Storybook project will likely take place far from downtown Kokomo, since he feels a similar edifice will only dilute the impact of Storybook Express (which, not surprisingly, has proven a resounding success as a convenience store).  He hopes to forge his next venture in another smaller Indiana downtown, or perhaps even something in Indianapolis.

What Zagar and Pitcher clearly share is an aesthetic vision divorced from an overt context.  Zagar could have filled his murals with references to Jim Croce or Marian Anderson or Mario Lanza, if he wanted to draw from South Philly’s heritage of vocal musicians.  He could have partnered with a nonprofit to engage in a comprehensive beautification campaign through targeted mosaic design and specific locations.  But the visual evidence suggests neither of these.  Nor does Scott Pitcher seem to care if 1920s Hollywood (or Hogwarts) has anything to do with Kokomo, the City of Firsts.  And therein lies the appeal.  Most of Kokomo’s other revitalization initiatives are sincere attempts to jolt the city out of its multi-decade torpor by massaging the dormant creative economy.  Kokomo hopes to retain its population through compelling quality of life amenities.  But when every small city sees bike lanes and murals as the remedy, couldn’t these urban organisms eventually develop immunity to the treatment?  Sometimes individual ingenuity—the entrepreneurs who swim against the current—can offer more long-term regenerative potential than all the social policies a city council can conceive.  Kokomo’s future success will undoubtedly owes a great deal to committed and talented civic leadership, but its distinctiveness may rely heavily upon a playful little building near downtown called Storybook Express.

PrevMONTAGE: Stratification across the river.
Putting a gas tank in the heart of a neighborhood.Next