The state house makes the laws; the state takes it for granted.

I’ve observed in the past how, almost instinctively, we come to expect a certain degree of monumentality in major seats of government, usually the prominent display of a central building that hosts those administrative offices.  In the typical Midwestern county seat, the courthouse provides that landmark—an elaborate masonry building resting in the center of a park-like square, often with a clock tower at its highest point.  Opposite the square on all four sides rest commercial and office buildings that date from the town’s original founding.  My earlier essay noted that Muncie, Indiana has essentially undercut its monumentality because it demolished the historic courthouse, replacing it with a brutalist-influenced concrete structure that offers no embedded landmarks or ornamental features to attract the eye.  As a result, Muncie has lost much of its “centered-ness” in its downtown, because no single remaining building offers a compensatory visual prominence.

But Muncie is a simply the political center for Delaware County, a mere one out of 91 other counties in the State of Indiana.  What if the visitor is looking for the most prominent landmark in a state capital—a higher tier of governance for a much larger, more populous body politic?  If a sightseer searches for a clear visual center in Trenton, New Jersey, this capital of the Garden State (with a 2010 population 8.8 million) is not likely to impress. 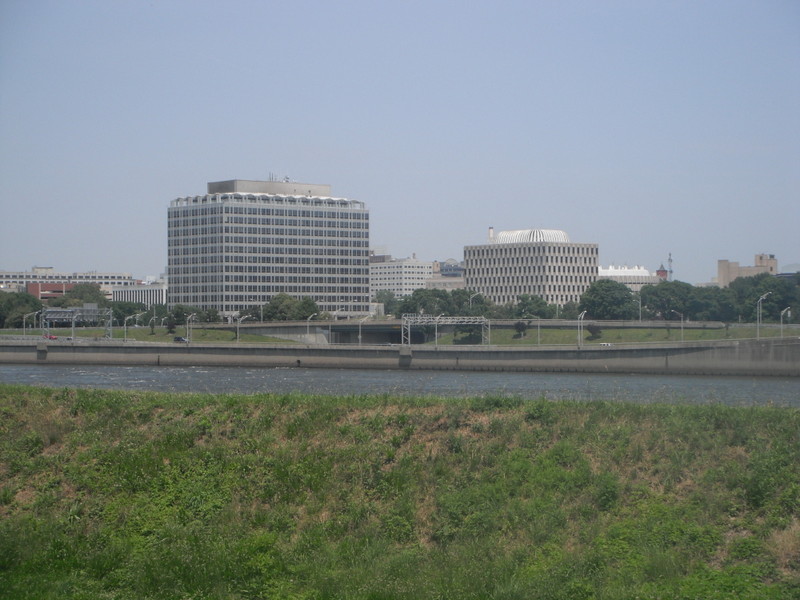 Despite several decades of population loss, Trenton is hardly a small city: it has stabilized in recent decades, down from its 1950 peak of 128,000 but generally locked at around 85,000 since 1990.  It is the state’s 10th largest municipality and the hub of the Trenton-Ewing Metropolitan Statistical area, which includes all of Mercer County (with a 2010 population of over 360,000).  Trenton sits in an unusual position nearly mid-way between the teeming metropolises of New York and Philadelphia.  Up to the 2000 Census, Trenton belonged to the Philadelphia Consolidated MSA.  However, after determining that a preponderance of commuters linked Trenton and Mercer County more heavily to the New York City CMSA, the US Census Bureau shifted its alignment.  Now Trenton identifies as the southwestern arm of the nation’s largest metropolitan area, even though it is still geographically closer to Philly and belongs to the Philadelphia media market.  Perhaps most importantly, it is the seat of government of the nation’s 11th most populous state and one that, by most measurements, ranks among the three wealthiest.

Nonetheless, Trenton assumes a low profile among national capitols.  Even most New Jerseyans will claim they have connection to the city unless the State employs them.  Perhaps it is no surprise that the New Jersey Statehouse does not immediately catch the eye.  But did it have to be quite so unobtrusive? 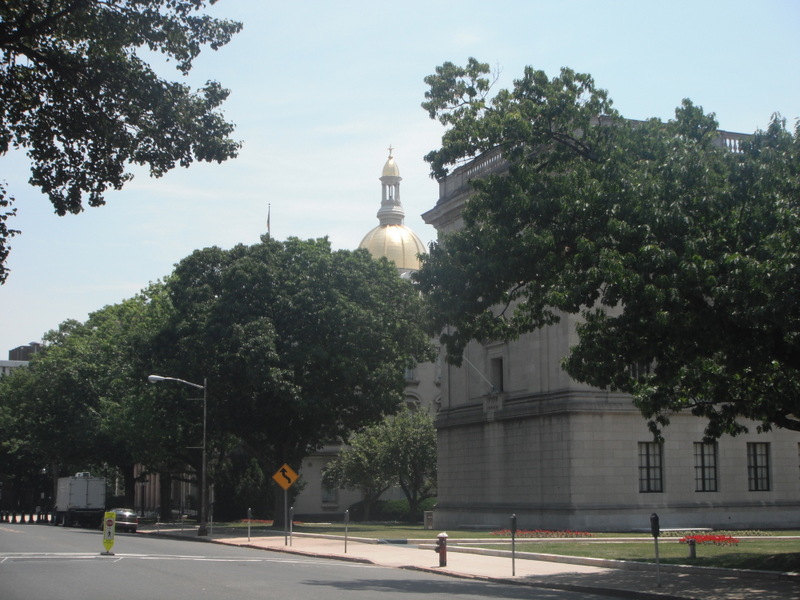 It sits quietly on West State Street, along the middle of the block, as evidenced by the Google Map below. 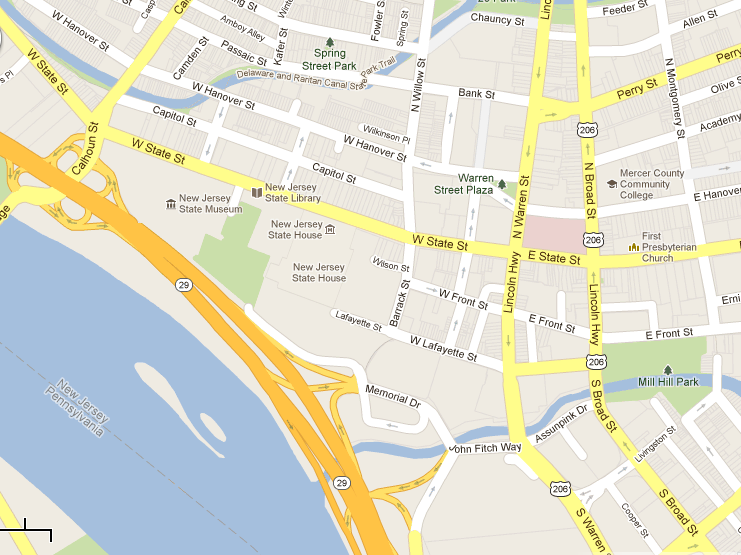 Unlike most statehouses in the country, it does not boast an expansive lawn or a bold processional; the setback from the street might be slightly more than usual, but it is still so modest that a motorist could drive right past the building without even noticing it.  (That’s what I did the first time I visited Trenton.)  The central cupola, a feature most statehouse buildings in the US share, glitters on a sunny day, thanks to its gold finish.  But it’s not particularly tall and is situated far enough in the center of the massive building that it isn’t easy to see it from the State Street address.  It certainly doesn’t assert itself as a visual landmark. 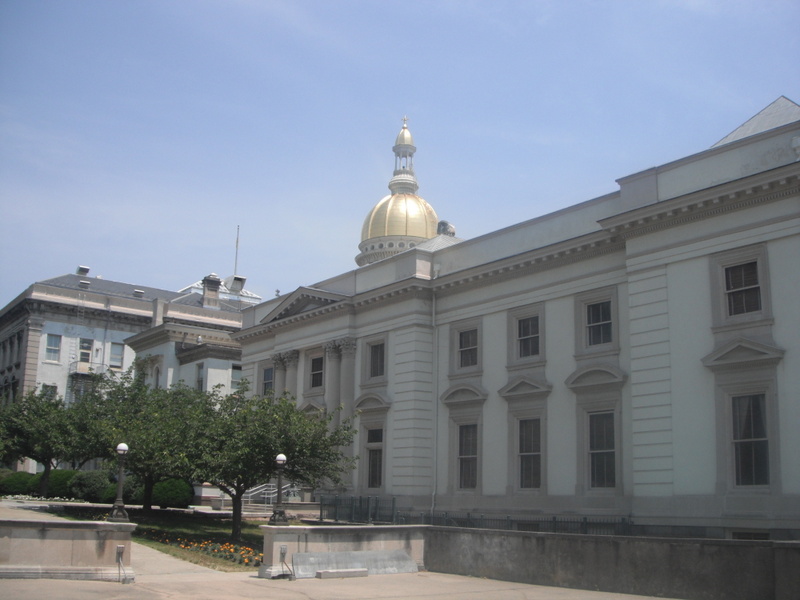 At the very least, the opposite side of the street could offer some visual cues: a long boulevard or another state building of elevated visual prominence.  But it really doesn’t. 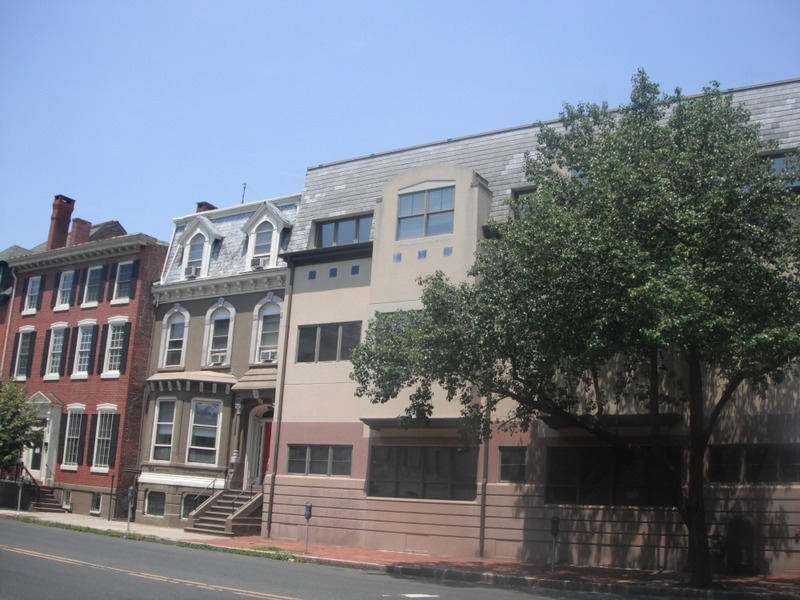 The handsome 18th and 19th century buildings (about two-thirds of which are in good condition) hardly suggest that the seat of the state’s government sits squarely across the street.  In fact, they conspicuously recall a conventional post-revolutionary residential neighborhood. 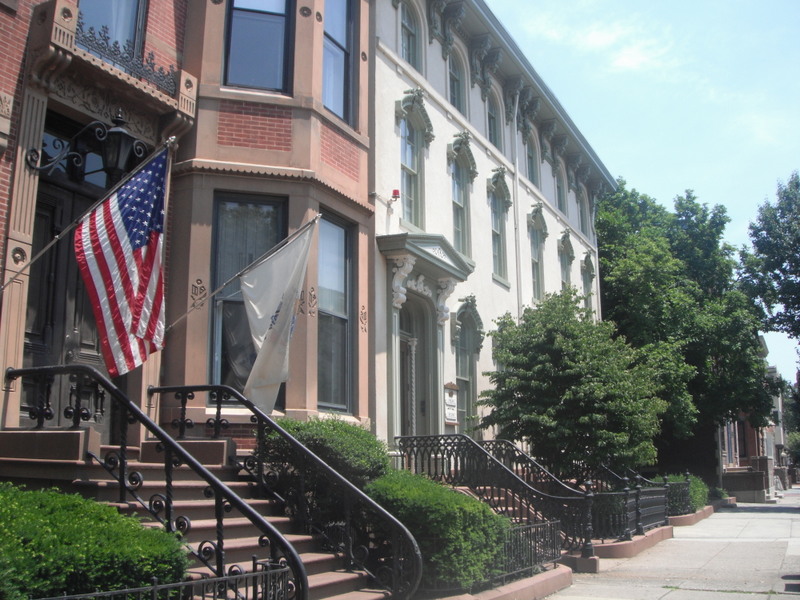 In Trenton’s defense, the space directly across the street from the cupola does host a modest plaza with a war memorial. 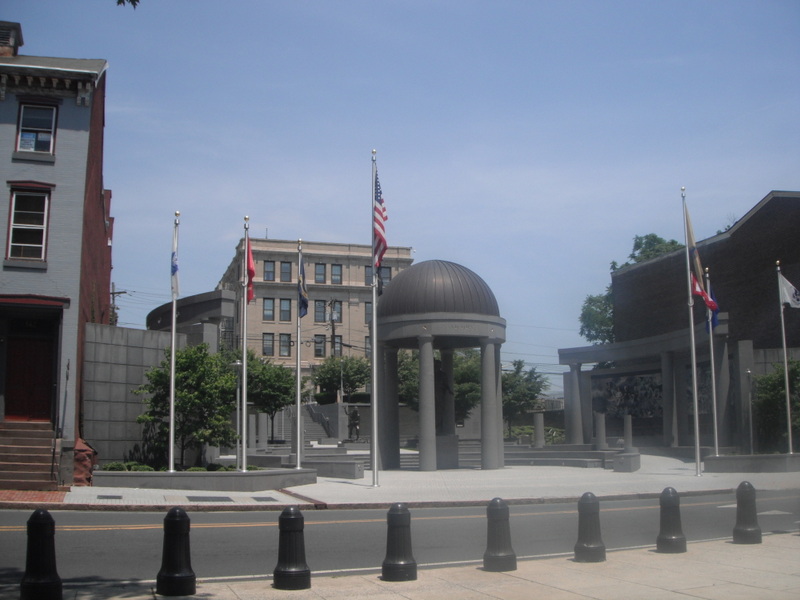 This opening ostensibly provides some decent views of the statehouse, but as this Panaramio photo indicates, the viewshed still isn’t great enough to see more than a portion of the sprawling edifice—one that grew in subsequent years after multiple expansions.  And this little plaza appears to be contemporary installation, evidenced by the blank walls on the buildings that sandwich it. 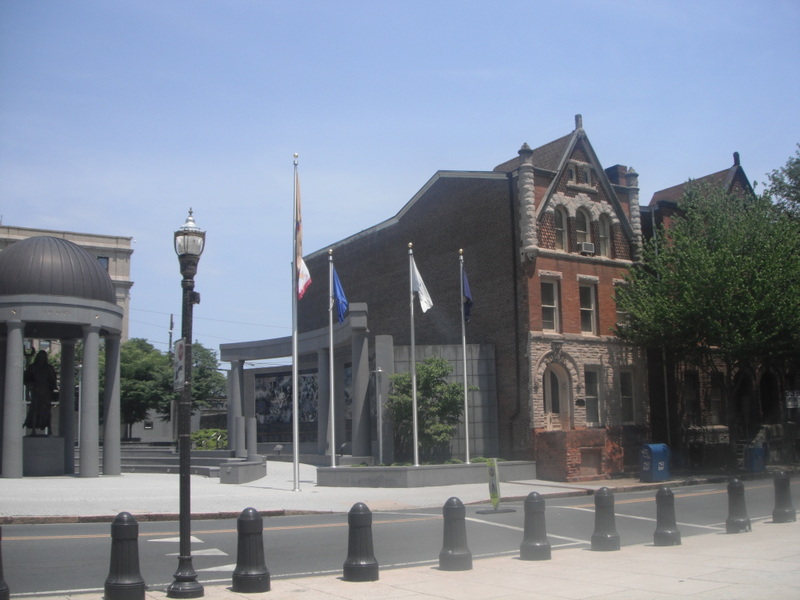 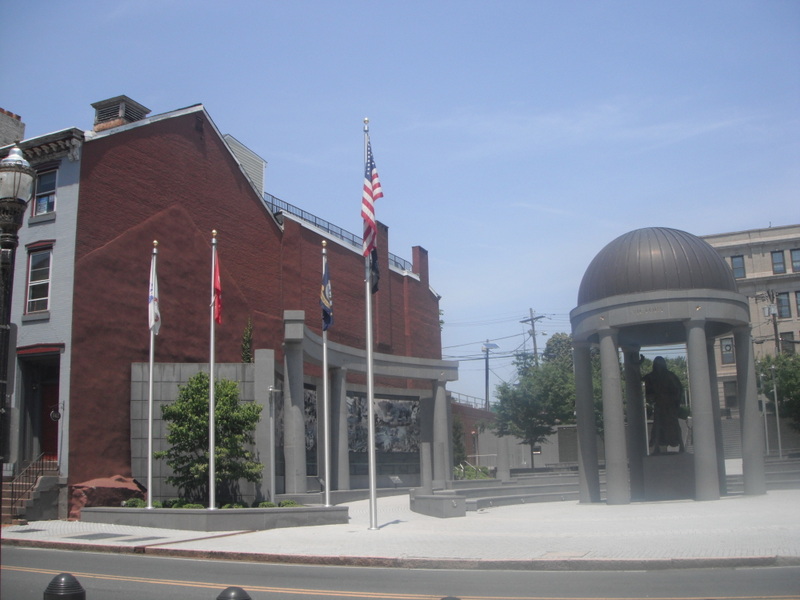 The impressions of the structures that previously abutted the centuries-old residences on either side of the plaza recall what used to stand there: similar residential structures that subsequent generations of Trentonians allowed to fall into neglect.  In time, demolition seemed like the best option.  Thus, this war memorial plaza is an afterthought—an insertion to fill a gap in the old building stock.  And it offers a modest view, but hardly an expansive one.  Even the winter’s denuding influence does little to enhance the views of the New Jersey State Capitol; this recent photo of State Street a bit to the east only reinforces how unobtrusive the building is. 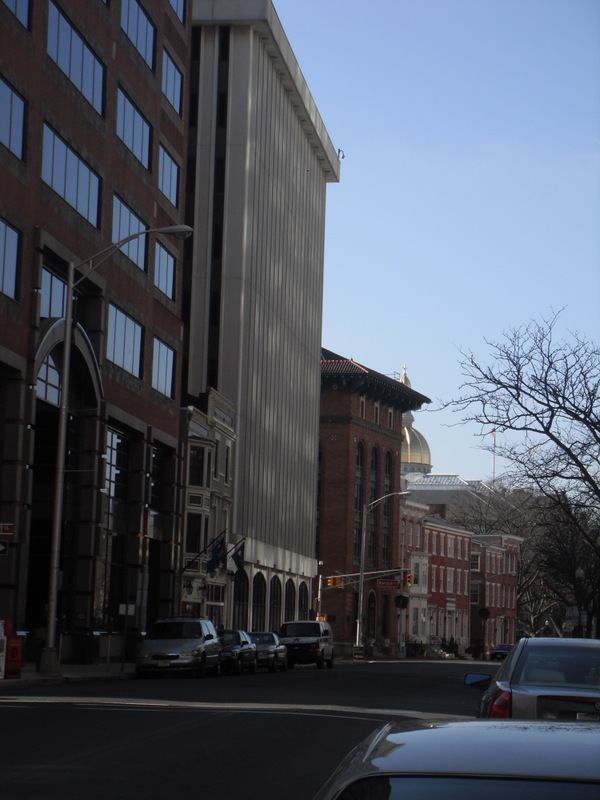 A pedestrian can barely see that gold cupola.  Meanwhile, a back-seat view of the statehouse, from Lafayette Street to the southeast, is hardly better. 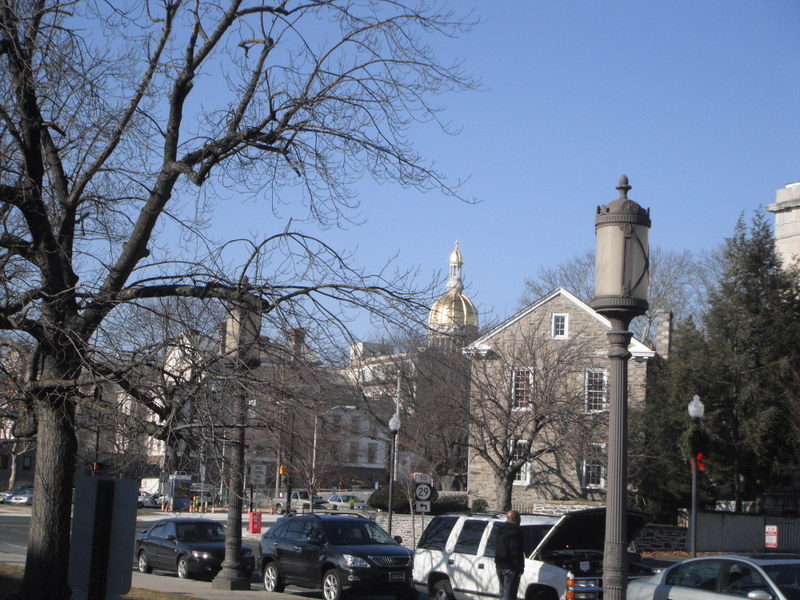 Sure, the cupola pokes out a little bit from behind the Revolution-era Hessian encampment in the foreground to the right, but the view is still widely obscured.  In fact, the only unobstructed view of the entire New Jersey Statehouse is from the south looking northward, across the Delaware River, from the town of Morrisville, Pennsylvania. 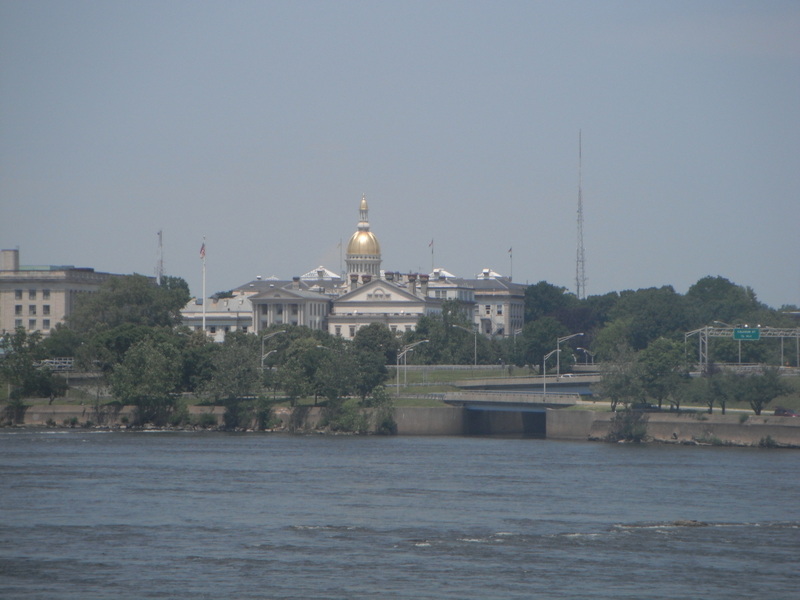 I admit that I cheated in my first photograph in this essay, which also shows the Trenton skyline, but panned at a different angle that deliberately blocked the statehouse.  But even in the rare perspective when the structure features prominently, the photographer’s vantage point obviously requires quite a distance.  This photo took some effort on my part: it sits on a quiet residential street in Morristown, and I had to climb up a levee to get the photo. 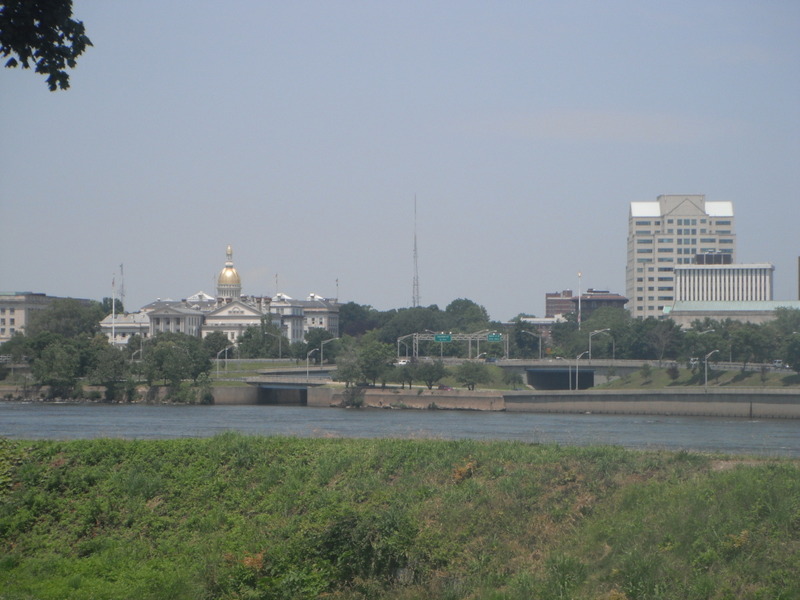 And pivoting to see the levee, as well as the houses on the Pennsylvania side, which enjoy little real view of Trenton or the river from their front doors: 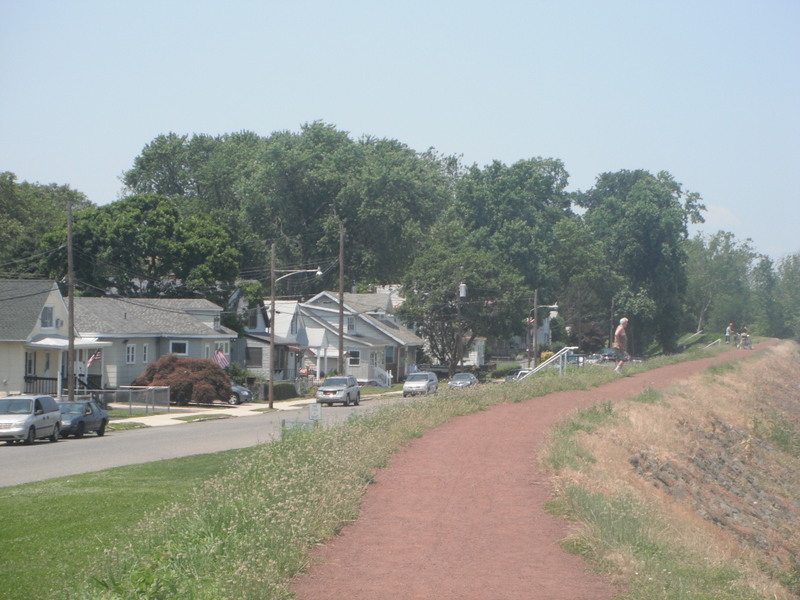 As capital cities go—both in the United States and throughout the world—Trenton is the antithesis of self-referential ostentation.  Founded in the first two decades of the 18th century, this New Jersey city predates the nation’s capital by nearly one hundred years.  In his book Representing the State: Capital City Planning in the Early Twentieth Century, Wolfgang Sonne recognizes that George Washington famously commissioned the military engineer Charles Pierre l’Enfant to plan a centrally located capital for the young nation, along the banks of the Potomac River.  The French-born ally of American Revolutionists believed that the scale of such a city should parallel the political greatness of the state, so he modeled it after the Baroque details of Versailles.  After designing a hilltop government center, l’Enfant organized the remainder of Washington DC along a comprehensive grid system, punctuated with radial streets that emanate from the two principal centers: the U.S. Capitol and the White House.

Despite his devotion to a clearly articulated vision, L’Enfant died in relative obscurity, though his legacy enjoyed a resurrection a century later, when James McMillan, chair of the Senate Committee on the District of Columbia, proposed the comprehensive revitalization of Washington DC using European capitals as inspiration.  Jon A. Peterson, in The Birth of City Planning in the US – 1840-1917, identifies the overriding political purpose of the McMillan Plan: it transformed the city into a place of national identification, and he convinced President Theodore Roosevelt to adopt it.  This time around, the reinforcement of a political center inspired a number of other American cities to introduce a similar degree of monumentality to their downtowns, even though many of them weren’t even state capitals.  In the years following the McMillan Plan, the contagion of the “City Beautiful” manifested itself through smaller civic center proposals in Cleveland, St. Louis, Buffalo and (most famously) Chicago, as well as state capitals such as Hartford, St. Paul, Indianapolis and Providence.  The prevailing view at the time seemed to be that sweeping diagonals rebelled against the monotony of the gridiron, which was the street configuration to which the majority of American cities already adhered.  In addition, the insertion of a processional or a mall-like passageway offered lengthy vistas that would typically terminate at a site of manifest importance.

But Trenton has none of these.  When it became the state capital in 1790, it was already a mature hub of industry—not a preconceived political center, as is characteristic of Washington DC and a fair number of capitals to the west.  It is also the second oldest statehouse in continuous legislative use, a fact no doubt abetted by the fact that New Jersey is one of the thirteen original colonies (Annapolis, Maryland hosts the oldest house).  So is this humility characteristic of the colonial states, most of which already hosted a number of industrial centers at the time of US independence?  To an extent, it is.  Look at the New Hampshire statehouse in Concord: 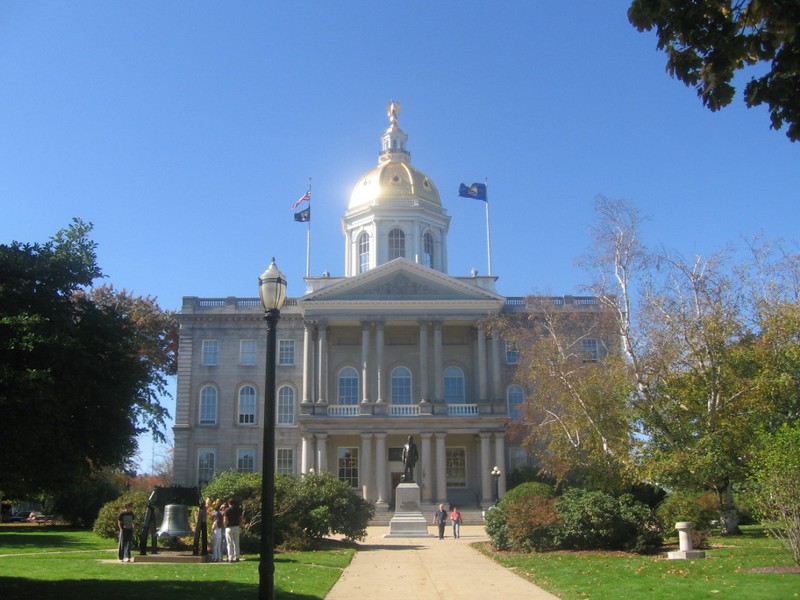 The lawn over which it presides lends a certain majesty that elevates it in comparison to the New Jersey equivalent, but the structure itself is modest in size, and it mimics the town green commonplace in just about every New England city. 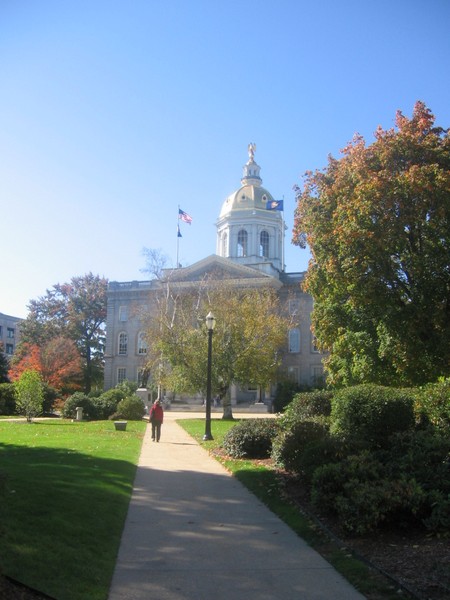 Attractive but conventional commercial buildings frame the other corners of the statehouse plaza: 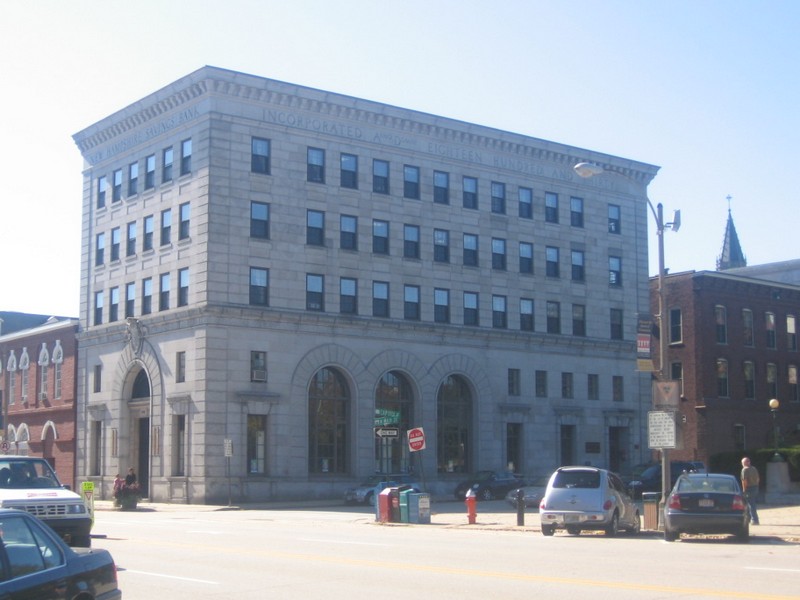 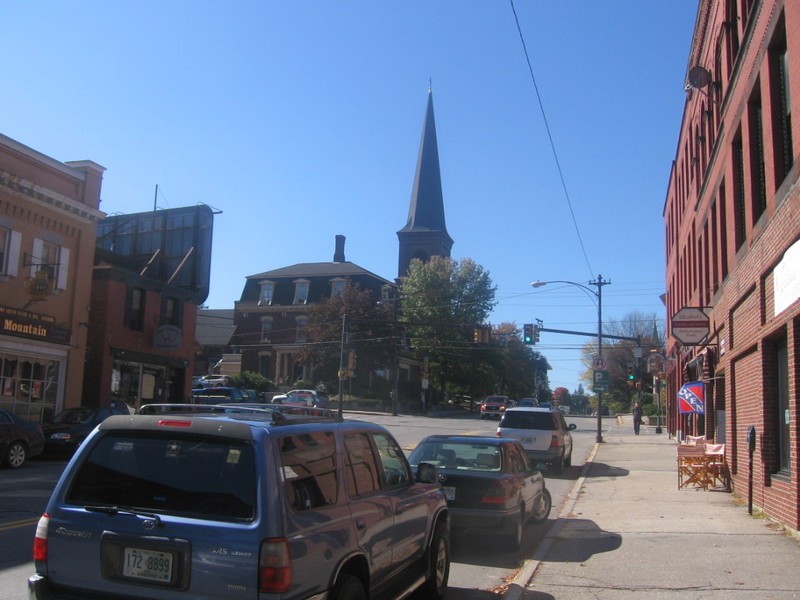 But nothing about Concord as a state government center would strike the average visitor as sublime.

Concord and Trenton surely owe part of their restraint—their workaday industrial character—to a deliberate capitalist gesture borne out of anti-imperialist sentiment in the aftermath of the Revolutionary War.  Virtually every major European capital, though presumably organically conceived (rather than overtly planned like Washington DC), remains saturated with references to its monarchic heritage.  Particularly in western Europe, the majesty that totalitarian leaders imbued in their capitals contributes generously to their aesthetic appeal in this day and age—just as it obviously did for James McMillan a century ago, or Pierre L’Enfant another century prior.  The malls and plazas and palaces may evoke centuries of virtual despotism, but it was all done in such good taste that we overlook the subjugation upon which these magnificent vistas depend.  Scrolling across the US amidst its variegated statehouses, one can discern our collective conflicted relationship toward political power and urban design.

We probably never will sort this relationship out, as both political monumentality and references to the City Beautiful movement pop up at random locations from time to time, through sundry downtown revitalization initiatives.  And while little Trenton may not ever hold its statehouse aloft, at least another landmark has more than helped the city retain some notoriety.  Just a hundred yards from the Delaware River levee is the US Route 1 bridge, and from that bridge is an uninhibited view of the neighboring “Trenton Takes” bridge, with the city skyline in the background. 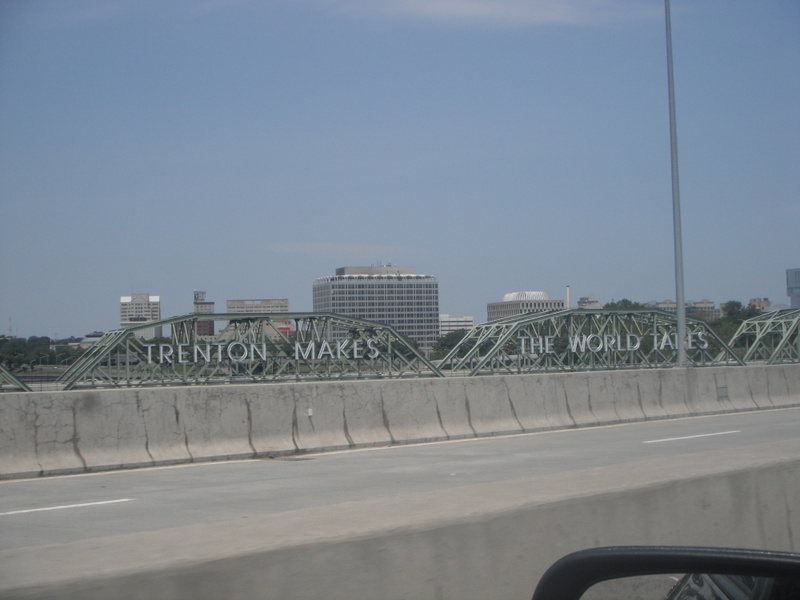 The nighttime view, in which these letters (dating originally from 1935) glow a fierce orange, provides one of the most signature entrances to any city in the country and has won Trenton a ticket to immortality through features in numerous TV shows and movies.  Trenton itself may not seem to embrace the spirit of its parent Garden State—it is, after all, one of only two capitals that physically borders another state—but it cynically tips its hat to its industrial past and post-industrial grit with aplomb and (dare I say it) Jersey attitude.

PrevPredicting the future by turning back the clocks.
Sustainable Mayberry.Next