Predicting the future by turning back the clocks.

In an essay from the past, I shamelessly stretched the definition of the term “land banking” to suit my own purposes.  How?  By showing two examples of the deliberate assembly of contiguous parcels with the purpose of building something new, but the problem is, neither attempt at parcel assembly consisted of vacant land, as is the customary use of the term.  The land banking was (as I indicated) retroactive, because the parcels themselves already had structures resting on them.   The owners of contiguous buildings had let the buildings remain vacant, long enough that some were falling into disrepair.  But these two examples were in the heart of walkable downtown Bloomington, Indiana and auto-oriented Greenwood, Indiana—economically healthy environments where it made no sense to abandon the real estate, since the landowners could easily find reliable tenants.  In due time, I knew that these dowdy buildings would get demolished, once parcel assembly was complete, and the developer would ideally rebuild something better than was there before, making a higher and better use of this coveted land.

Well, I was wrong.  I guess I learned my lesson in speculation.  Or did I?  The example in urban Bloomington warranted a follow-up essay about five months later, because the developer, who had hoped to build a large condo building on Kirkwood Avenue on the site of multiple smaller structures, ultimately decided simply to upgrade and improve the appearance of the existing structures when the condo market went bust.  In truth, I wasn’t wrong about the land banking process—it just didn’t work out the way the developer had anticipated.  Meanwhile, the suburban Greenwood example simply foretold the replacement of old retail outparcel buildings (mostly drive thru restaurants) with newer, flashier ones, like a contemporary Chick-fil-A.  So I was wrong on that, but maybe the intention was for a larger retail structure that again flopped, since the economy made it harder to secure financing for more ambitious projects.

Either way, I’m at it again, speculating on another land banking initiative, exploiting the term once more.  I may be wrong once more, but I’m more confident than ever about my guesswork because of the setting: this time it’s in densely populated downtown Philadelphia, usually referred to by the locals as Center City. 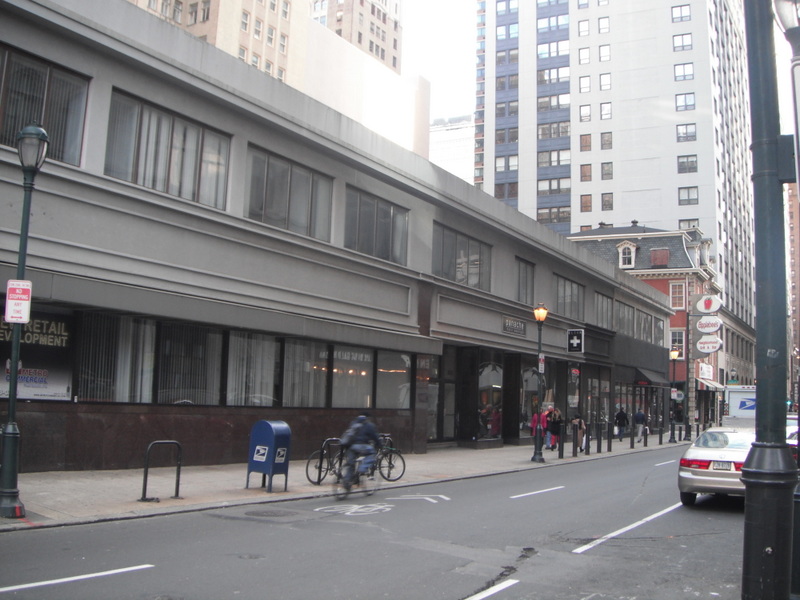 By most measurements, the squat, nondescript building in the photo above appears to be in good enough condition, but it sure doesn’t seem to have much luck at securing tenants.  It sits at the intersection of South 15th Street and Walnut Street, and its prime storefront is glaringly vacant: 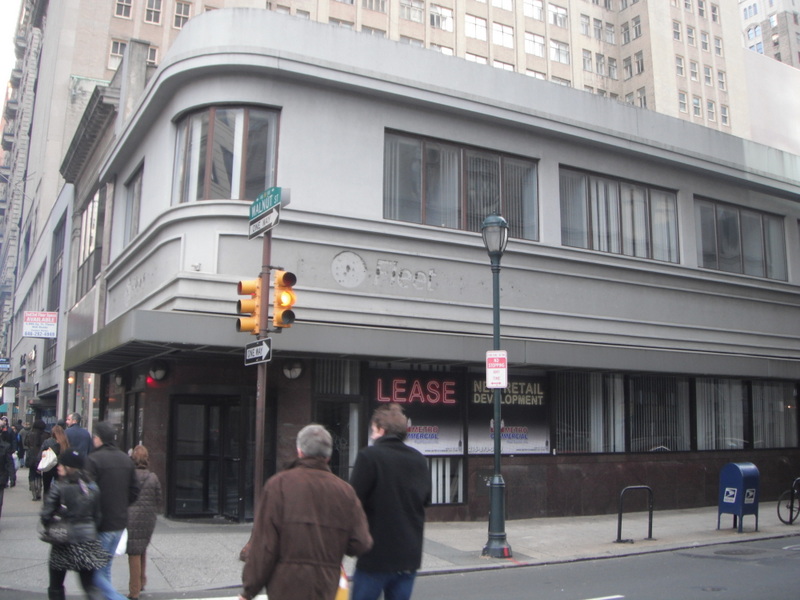 And the first photo was misleading; it revealed the entire frontage along South 15th Street, but despite the various signs for a coffee shop, hair salon, and Korean restaurant, the reality is far less promising: 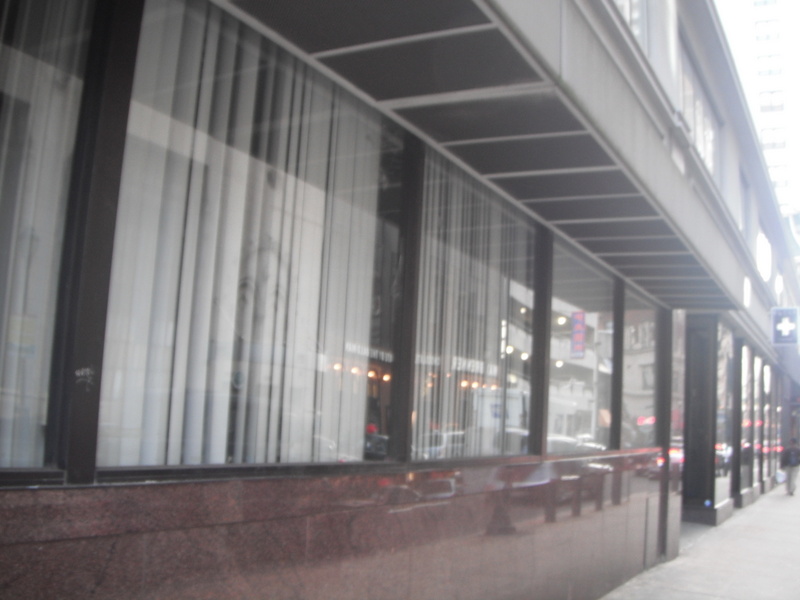 The Panache salon has vacated the first group of windows on the photo above, while Elixir Coffee House— 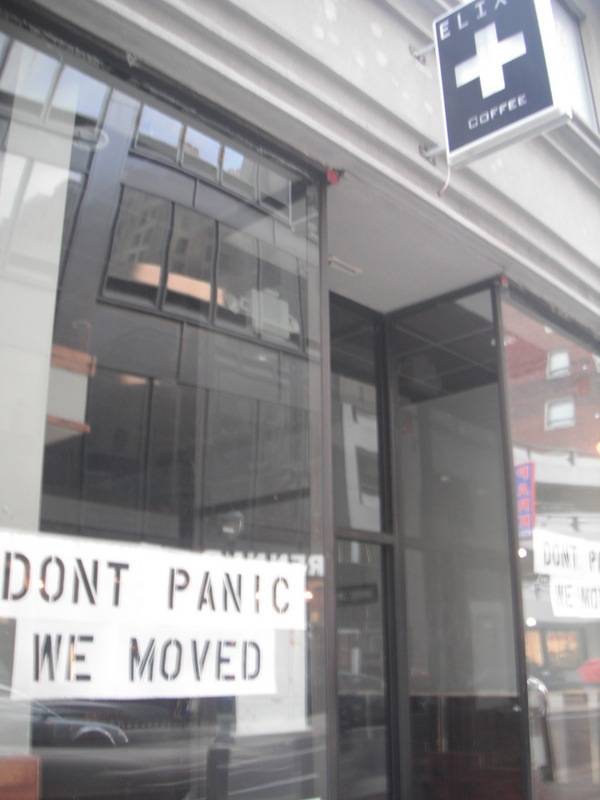 Gone as well, relocated a mere half-block to the west.  One relocation after another.  Finally, it would appear that Miga, the Korean restaurant at the end, has closed altogether. 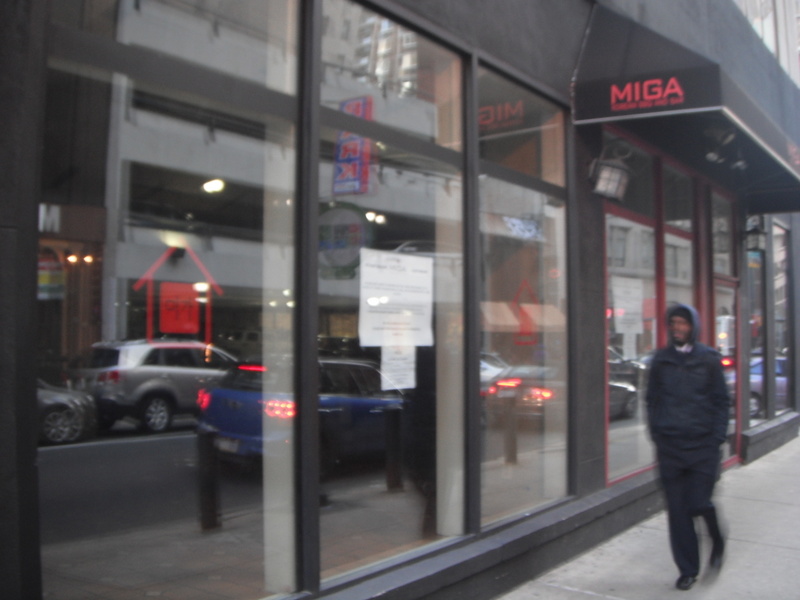 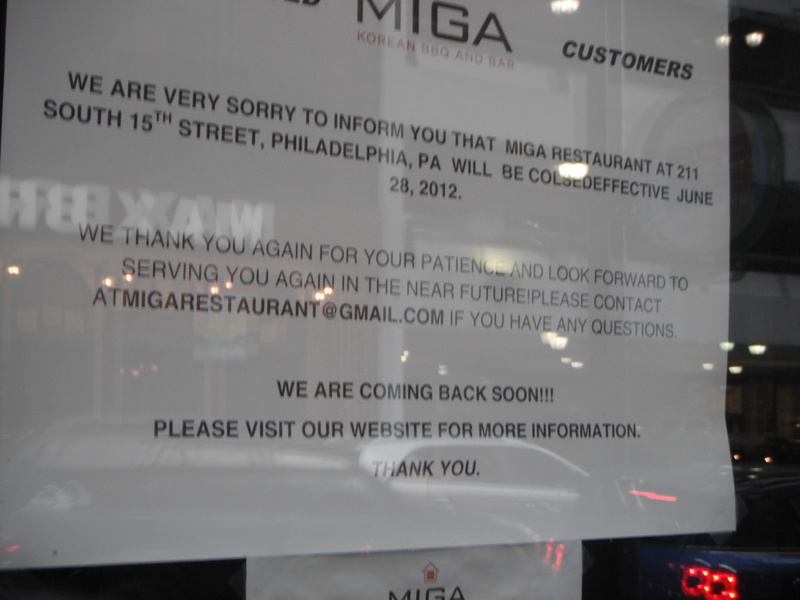 However, a small sign in the window indicates that the business hopes to reopen soon…presumably in a new location.  Meanwhile the second floor of the building doesn’t look much more active: 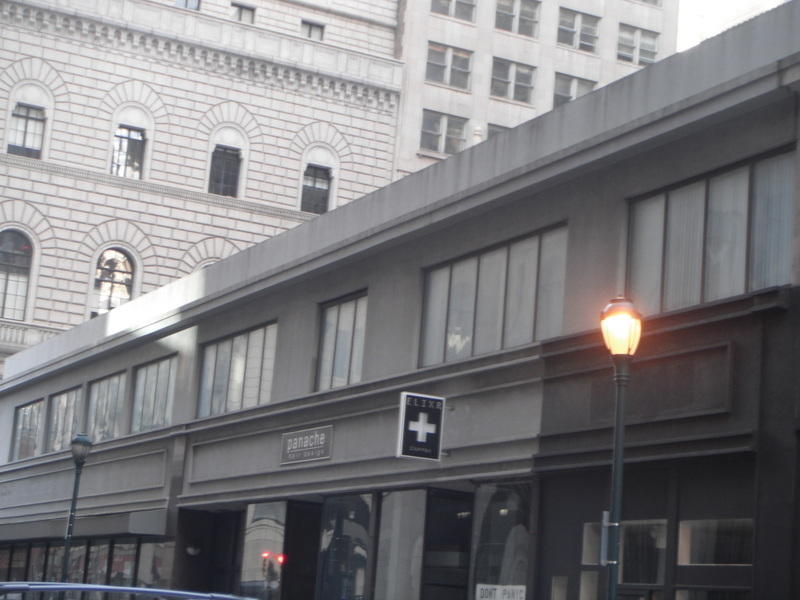 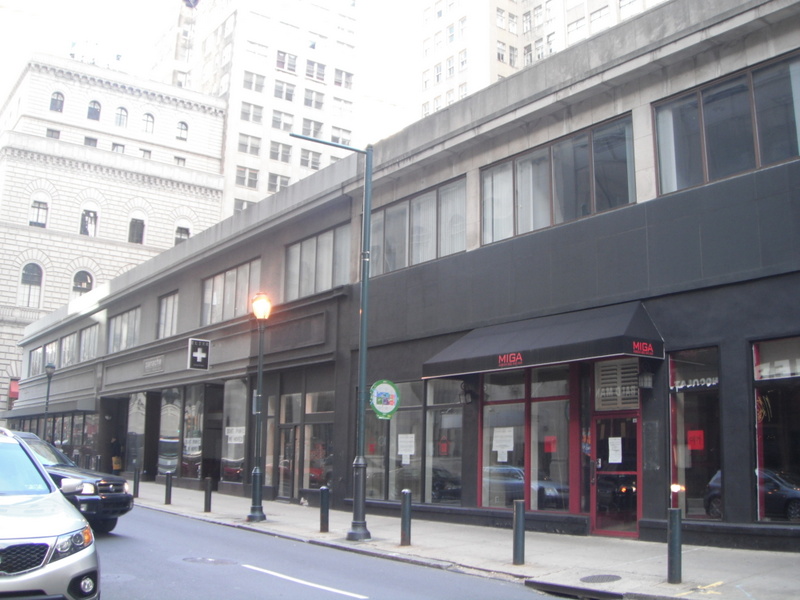 The pictures don’t fully capture this, but in the few places where the curtains are drawn, it is clear that the offices are empty, and the thickness of dust across all the windows suggests that they haven’t been used in quite some time.  A complete relocation of all the tenants facing that street.

The frontage on Walnut Street is no better. 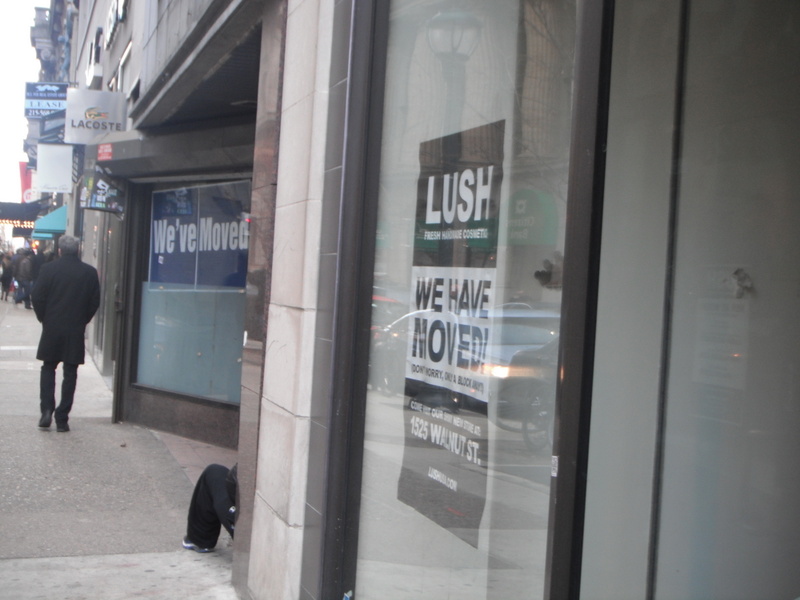 Lush, the upscale purveyor of soap and cosmetics, used to occupy that street-level space in the adjacent two-story building, but it is apparently yet another relocation.  And a bit further down the street, the furniture rental store has also relocated, in yet another low-rise structure. 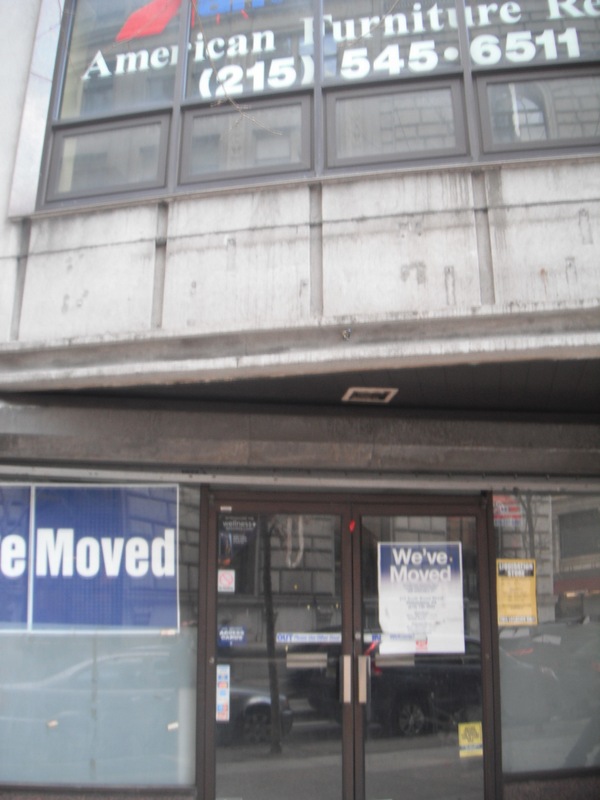 The first floor apparently used to contain a Rite Aid Pharmacy, but it too has terminated its lease.  No sign of a relocation, but there are plenty other Rite Aids nearby.  In short, the building appears to be completely vacant.  The absence of pedestrian traffic along 15th Street only confirms the building’s lack of appeal.  An outsider might draw the conclusion that this is succumbing to blight and disinvestment, but anyone remotely familiar with Philly would know otherwise.  15th and Walnut is just blocks from the heart of Rittenhouse Square, long Central City’s most vibrant park space and the name of the prestigious surrounding neighborhood. 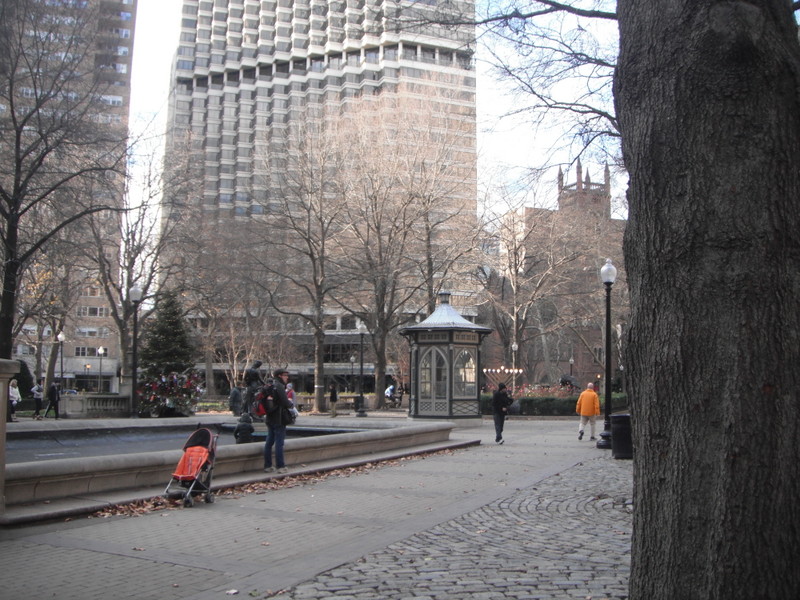 Meanwhile, Walnut Street is the most heavily-trafficked retail corridor, widely sought after by national upscale brands.  If anything, it seems a bit strange that a low-end furniture rental company would voluntarily pay the exorbitantly high rents along Walnut Street, especially considering that directly across the street from this building is the following tenant: 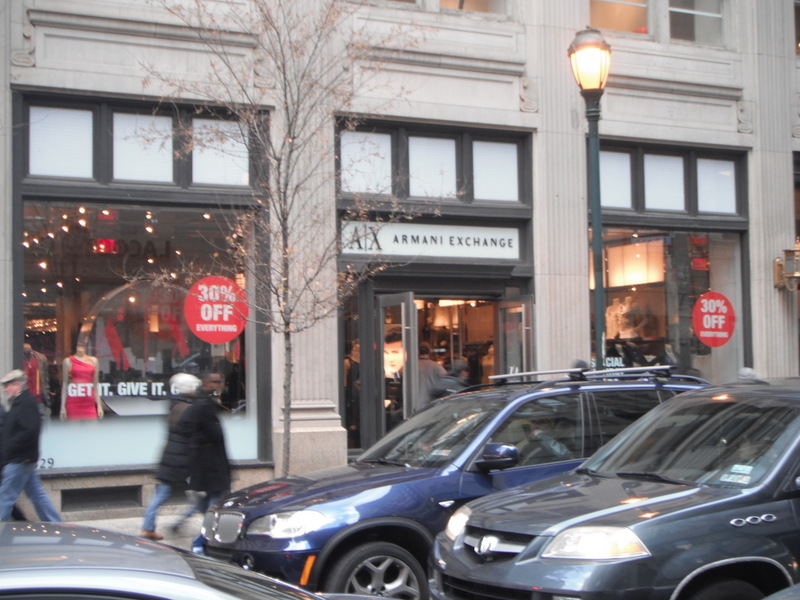 It’s hard to think of many retailers choosier than Armani Exchange.

In short, this group of three vacant buildings in a posh part of town bespeaks the quiet transfer of titles among speculators who no doubt believe this corner deserves a higher and better use.  The tenants didn’t depart because the location was bad.  A Google Street View from reveals that both the 15th Street segment and the Walnut Street cluster of three façades were fully tenanted as recently as August of 2009.  More likely than not, the owner(s) did not allow them to extend their leases into a new term–akin to a forced relocation.  In this case, the land speculator has assembled multiple adjacent parcels with the hopes of building something with potential to earn greater income, no doubt benefiting from a higher Floor Area Ratio (FAR) than the meager two and three stories that the current buildings offer.  In order to build anew, this developer will need to demolish the existing structures; in order to demolish, he or she will obviously have to vacate.

I have based this entire essay on a hunch in passing through the city briefly one afternoon, in which I guessed what was about to happen by peeling back the layers, thereby figuring out the current phase of an ongoing development trajectory.  I was first taken by the conspicuous absence of pedestrian traffic around the building fronting 15th Street— 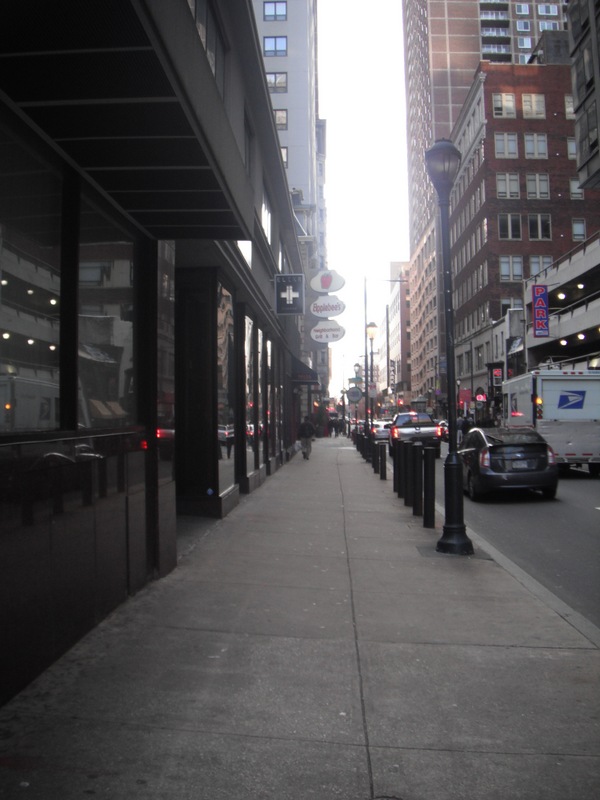 —particularly in comparison to all the streets around it, or even the opposite side of 15th:

Moments later, it occurred to me that most if not all of the storefronts were vacant, despite the signage.  Then I noticed the architectural details of this building, or the lack thereof.  I’m hardly the most well versed architectural historian, but usually I can at least approximate the date of a building from its appearance.  Not this time.  It almost seemed as though the designer had eschewed any ornamentation (or even a deliberate absence of ornamentation, which can be an enhancement in itself) that could give it away or distinguish it.  The landlord even let Miga, one of the former tenants, paint its section of the façade black, even though the black paint only extended through the first floor. 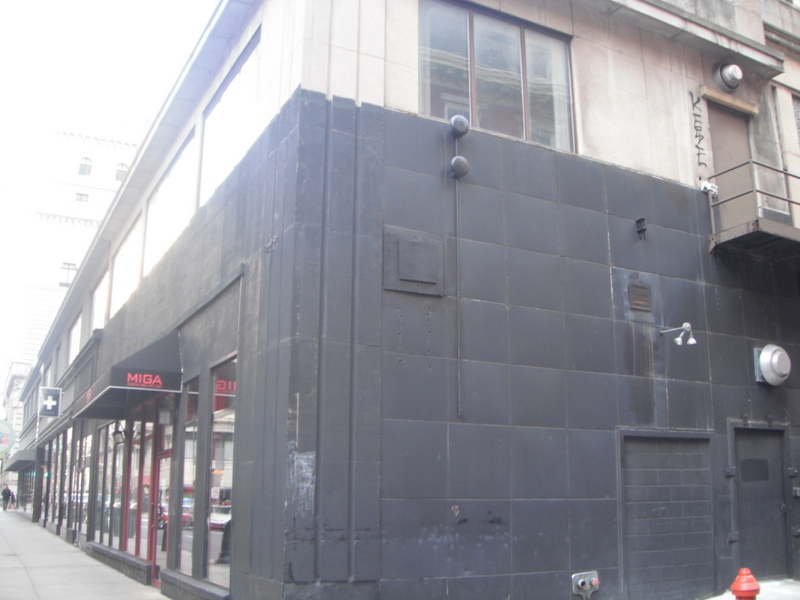 Ugly ugly ugly.  My suspicion is that this building comes from a time when the economy of urban Philadelphia was so feeble that even Rittenhouse Square was struggling, and the risk-averse developer chose unimaginative and low-slung construction, because that was all the weak market could support.  The 1970s or early 1980s, perhaps?  Since that time, Rittenhouse has reclaimed most if not all of its luster, and the time is right to build bigger and better.  Am I right?  With so much tenant relocation, will these buildings soon face demolition?

A modest bit of internet research vindicated my suspicions: these buildings will soon come down.  The replacement?  A four-story mega-structure, with each floor devoted to a separate retail tenant.  The buzz on the Naked Philly website reveals, not surprisingly, a fair amount of disappointment: a premier corner such as 15th and Walnut could easily support a 16-story mixed-use building, octupling the FAR rather than merely doubling it.  But we are still in the midst of lean economic times, forcing developers and their equity partners into far more modest decisions than they otherwise would make.  At the very least, this latest example of “retroactive land banking”–a gradual relocation of all tenants in prep for a more intense land use–demonstrates that the machinations of a relatively unregulated land market are helping new construction to chug along, against all odds.  If a blighted blemish sits squarely in a sheet of polished platinum, rest assured that someone with deep pockets has already pounced on the disparity, ready to invest in a way that could level the playing field…even if only aesthetically.

PrevIt may take a village, but what if the village is the taker?
The state house makes the laws; the state takes it for granted.Next

2 thoughts on “Predicting the future by turning back the clocks.”