Urban lipstick on the suburban pig.

In the large American cities that lack a robust public transportation system—which is most of them—we justifiably celebrate every minor victory toward shifting development away from auto-centrism.  Mid-sized cities in the Midwest and South seem to be among the most susceptible: most of them have a “Midtown” district that predates the automobile.  The most basic and succinct definition of Midtown I can think of is that it is the closest high-density commercial and residential node from downtown, usually no more than a mile or two away, but serving as a historic satellite to the downtown.  (It is also customarily closer to the central business district than anything labeled “Uptown”, which is one interval further.  In short, Midtown is typically right between Uptown and downtown.  If Midtown is already on the affluent side of town, this district probably hosts some of the city’s best historic architecture, all remnants from the time when it was a fashionable commercial hub.  At this same time, the aforementioned architecture in these Midtowns has struggled from a period of neglect and perceived obsolescence during the peak of decentralization to more auto-oriented suburbs.  Because, truth be told, most Midtowns (that district just a mile or two away from the core of a major city) is also the “inner-city” that faced substantial disinvestment and abandonment in the middle of the 1900s.

As a result, these days many Midtowns are patchy at best, with parking lots interspersed to serve the surviving old buildings, juxtaposed with some more recently constructed retail structures that serve both the neighborhoods’ residents, as well as commuters zooming down these streets on their way to the fashionable suburbs several miles out where they live.  Those new structures don’t fit in, not only because they eschew high-quality brick or limestone materials, but because they are often identical to the same structures those commuters would find in the hinterlands where they live: drive-through fast-food restaurants, drug stores, or automotive service centers.  There’s nothing wrong having them in urban settings: at the peak of decentralization, city leaders were no doubt happy to have investors in their struggling Midtowns and welcomed the construction, regardless of how incompatible it was with the older neighborhood buildings.  After all, transportation in private vehicles were the way of things, and these old districts had to adapt.

But, more often than not, the Midtowns also boast classically walkable street grids, at least some high-quality older housing (preserved or refurbished), and mature tree canopies.  They are sometimes a quick bus ride or even bicycle ride from downtown.  And they are hip again.  As a new generation of urban admirers has begun to rebel against the still-dominant suburban archetype, many advocates have tried straddling between the ideological extremes of either blocking all incompatible infill development or permitting anything and everything for the sake of bolstering the tax base.  The result of this push-and-pull manifests itself in a variation of a classic old form: the pseudo-urban infill, like this Chick-fil-A in Birmingham, Alabama from the photo below. 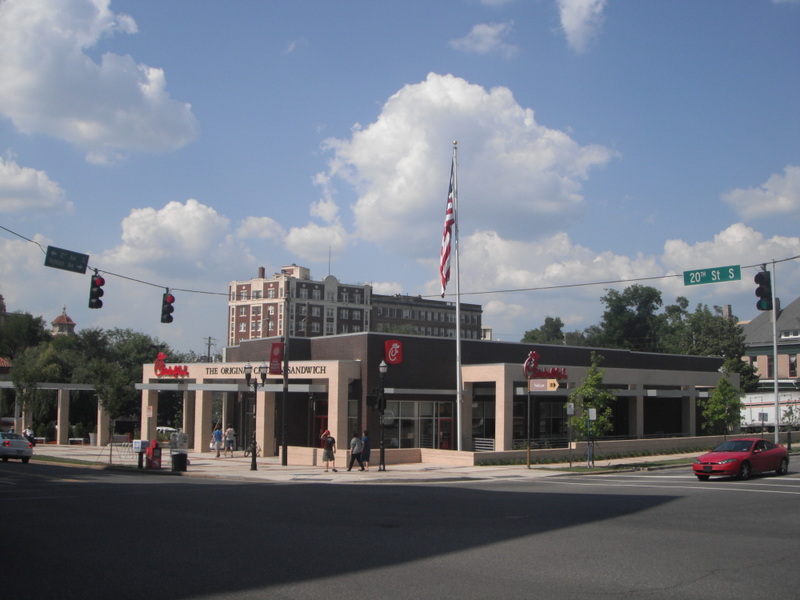 It sits at a prominent intersection in the city’s Five Points South neighborhood, about a mile from downtown and one of the more popular destinations in the metro for pedestrian-oriented nightlife.  Just a block from the Chick-fil-A is the heart of the neighborhood, characterized by its unusual intersection and the wonderfully surreal Storyteller Fountain. 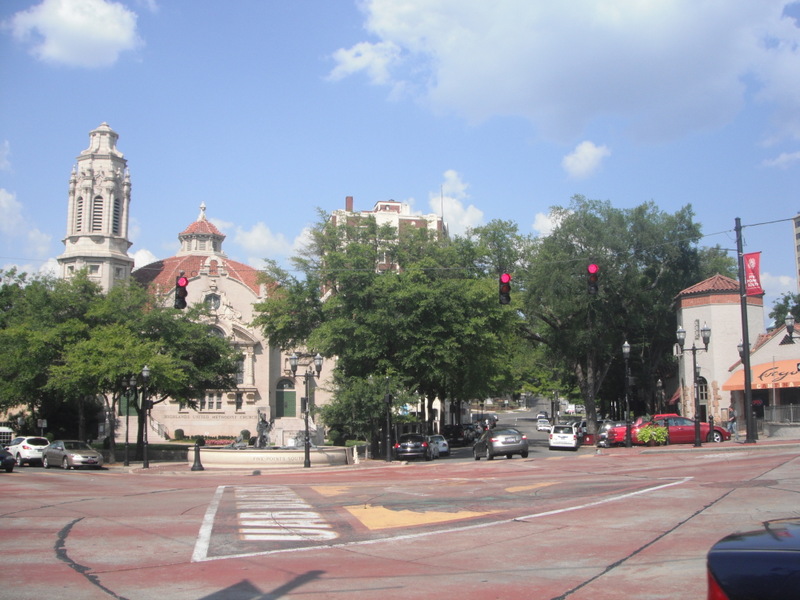 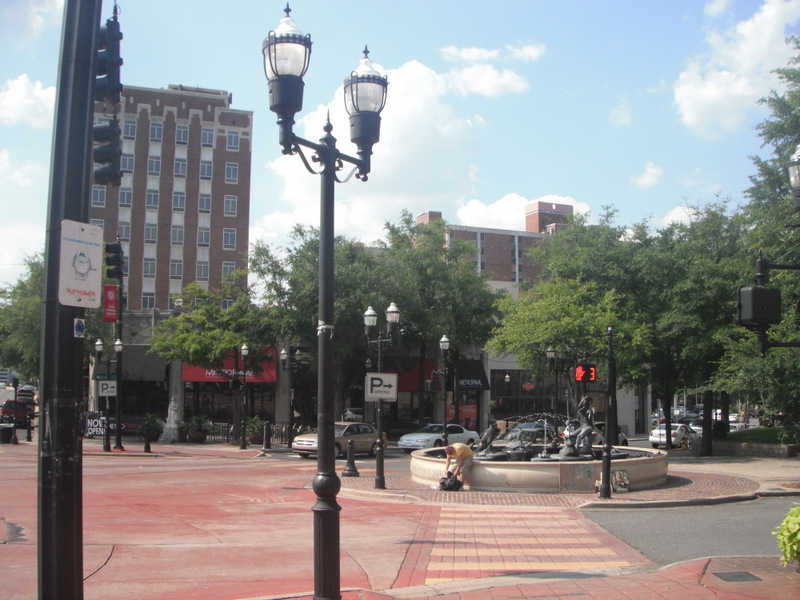 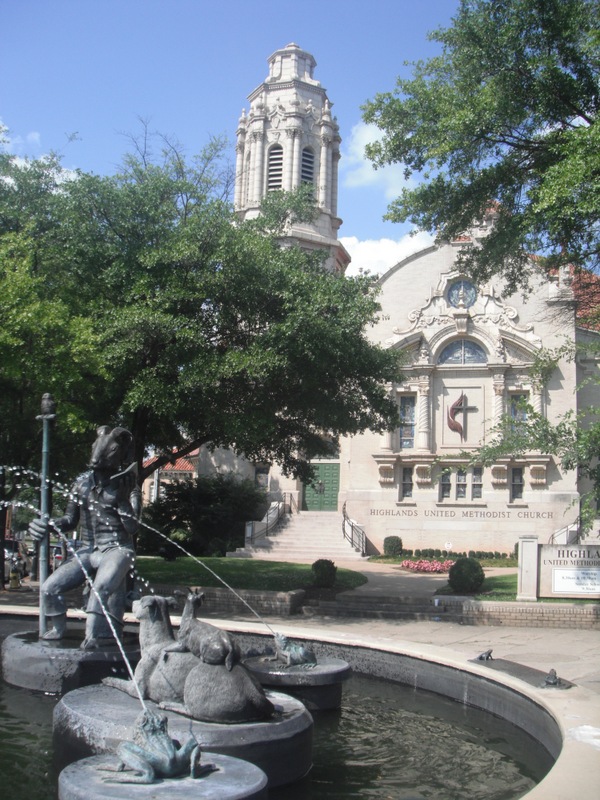 What distinguishes the Chick-fil-A in this first photograph from the freestanding buildings in the suburbs?  The biggest feature I can detect is the placement of the building in relation to the parcel: it more or less stands flush with the property line.  (I say “more or less” because there does appear to a bit of gap between the building and the sidewalk, presumably reserved for outdoor seating or bicycle parking.)  A pedestrian can approach the building’s entrance directly from the sidewalk, without having to walk in the path of a vehicle. 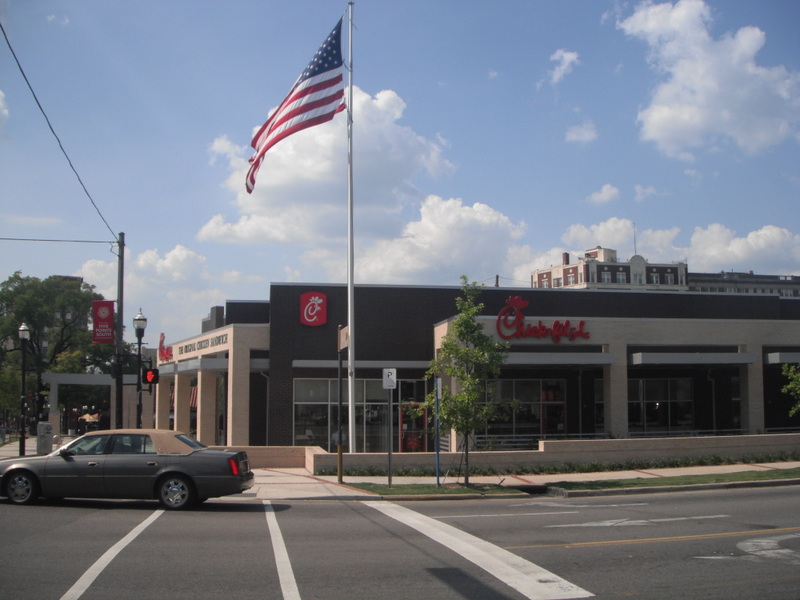 In addition, looking at the side of the building, it does not appear to offer a drive-thru window. 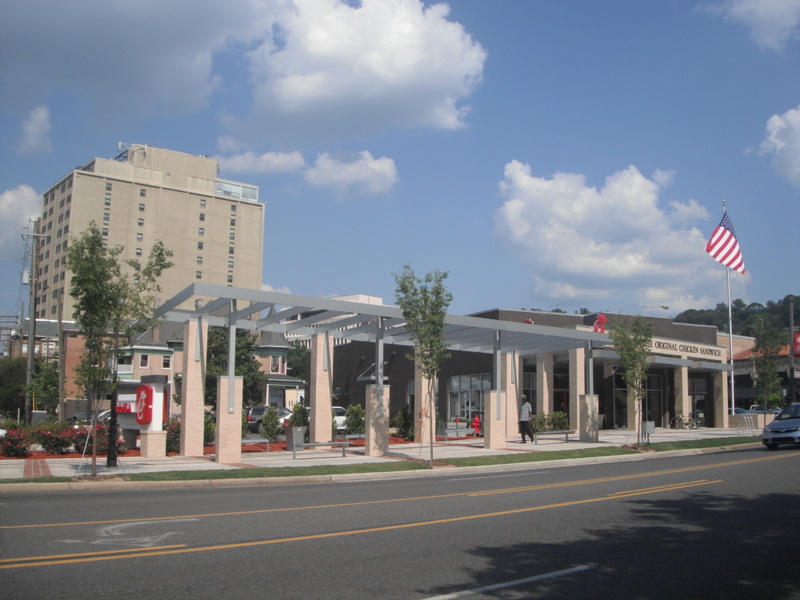 Instead, this Chick-fil-A features a parking lot that abuts a sleek “arcade” along a widened, landscaped sidewalk, exactly where a drive-thru lane would normally cut across in join with the street.  These two modifications might seem modest, but the site plan for this storefront would contrast significantly with the typical suburban configuration, which would include multiple rows of off-street parking in front of the structure, thereby forcing the building far from the street.

It might not seem like a dramatic gesture, but, barring the necessary zoning regulations, it is extremely difficult to effect this sort of change in typology for a typically suburban, automobile-oriented establishment.  And Birmingham does not have the regulations in place, at least not here at Five Points South.  A review of the city’s Zoning Ordinance and Zoning Map places this part of town in the B-3 Community Business District zone.  Buildings within the district have no true minimum front, side, or rear yard regulations, meaning that setbacks are not required—unless a parcel sits next a lot in a different zoning district that regulates dwellings, a building in B-3 can bump up right against the lot line.  Meanwhile, the rules in Zone B-3 for commercial parking lots require one space for each 200 square feet of floor area (Section 5-1, item 19, but halved because of the standards of B-3).  The City of Birmingham’s zoning ordinance allows for an urban structure to be built with zero setbacks, but it doesn’t require it; the regulations have set the minimum yard sizes at “none”, but they have not set a maximum.  The regs also have a minimum required number of parking spaces that is less strict that most other regions in the city, but it has no maximum space requirement.  So any developer who chooses to build here has the option to build a structure with relatively high lot coverage without seeking a variance to the rules, but he or she could just as easily build a quintessential suburban building as well.

I confidently suspected, back when I took these photos, that this Chick-fil-A adapted to this configuration only after significant wrangling with the City.  In light of these standards, it turns out I was right: the City’s Design Review Committee rejected some of Chick-fil-A’s initial proposals for the site back in 2010.  Why did the Committee reject them?  Because Chick-fil-A wanted to insert its suburban design typology smack in one of Birmingham’s most economically healthy urban neighborhoods, complete with a drive-thru in an area thick with both vehicular and pedestrian traffic.  Chick-fil-A’s initial design submission met zoning standards; the company’s team did nothing wrong.  But a combination of the Design Review Committee and concerned members of the Five Points South neighborhood fought the drive-thru option, claiming it would induce more traffic and—most importantly—was not “in keeping with the character of Five Points South.”  The Committee and Five Points South Association risked scaring off Chick-fil-A altogether as an investor in the neighborhood, but they weighed their risks and decided it was more important not to sacrifice the walkability of the area, especially since this new restaurant was replacing an equally suburban-minded predecessor: a shuttered Ruby Tuesday that also did an adequate job of respecting the urban character at the intersection, as indicated in a Google Street View from June 2008.  After some further revisions, Chick-fil-A agreed to build at the corner without a drive-thru.

And so it goes.  In most medium sized cities with weak mass transit, the national chains must face higher neighborhood and City-led scrutiny before they can plop their suburban buildings in a Midtown that is valiantly trying to recover from decades of decentralization and disinvestment.  Sometimes the zoning regulations are strict enough to prohibit building under anything but a supremely urban configuration, with minimum off-street parking, no drive-thrus, and zero setbacks.  However, out of fear of repelling virtually all potential investors, few cities yet enforce such draconian standards.  If a Walgreens or CVS or McDonald’s or Jack-in-the-Box thinks a certain urban setting is lucrative enough, it will probably jump through the hoops that the City throws at it, just as Chick-fil-A apparently did.  The result generally appears to be a win-win: a previously vacant (and potentially blighted) parcel gets filled with a reliable national retailer, and the surrounding community is content with the final appearance.

But there’s always a clincher.  Take a look at that one side of the Chick-fil-A—the side opposite the street intersection: 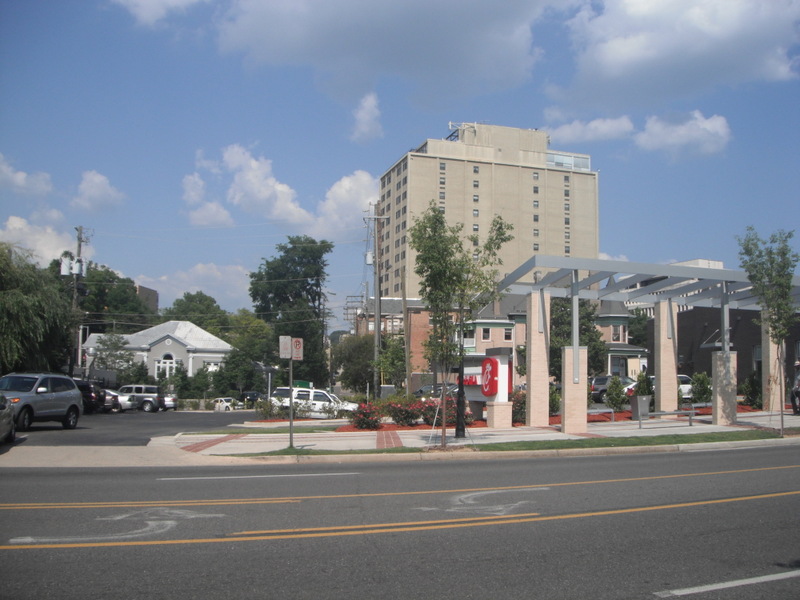 It’s still an awfully big parking lot for an average-sized restaurant.  Without counting the spaces (and without knowing the exact square footage of the building), I’d wager that this Chick-fil-A has well more than the minimum of one parking space for every 200 square feet in the building’s floorplate.  It’s a suburban-sized parking lot.  And, even though the building is virtually flush with the parcel’s edges, it’s hardly dense in comparison to the environment around it: it’s still a squat one-story structure with a single use.  So, after all the negotiations between the City, the neighborhood, Chick-fil-A, and who knows what other parties, the result is still a one-story structure on a prime intersection, lacking any mixture of uses.  Not terribly urban, and certainly not in keeping with the type of buildings that Five Points South would have supported during its initial heyday back in the 1920s.

And so it goes…yet again.  Most of these Midtowns get buildings like this—urbanism with the bar set incredibly low.  It’s still better than a drive-thru fast food that sits smack in the middle of a sea of parking lots.  But—it seems ironic now—this is my second article in a row for which the phrase “Pyrrhic victory” seems appropriate.  One of Birmingham’s most attractive neighborhoods received this mediocre building in 2011, when it is possible that, given the likelihood that the neighborhood’s attractiveness will only increase in the future, it could have fought for a two or even a multi-story building at some point down the road, when land values are high enough that developers can’t justify such a big parking lot, or such low FAR (Floor-Area Ratio), or the zoning regulations insist on a high-density structure rather than simply permit it.

Obviously, I’m not faulting the City of Birmingham, or any other party, for that matter.  No one can gamble on the future when we reflect upon the vast array of interweaving temporal and spatial evolutions our cities have experienced in their relatively short lives.  Who would have perceived in 1950 that Atlanta would end up five times the size of Birmingham?  Back then, they were about the same size.  If one can imagine that Birmingham may someday surge into the stratosphere the way Atlanta did, this modest Chick-fil-A is a mere “bookmark” for the high density mixed-use building that will eventually replace it.  And, as placeholders go, a slightly modified suburban prototype is still better than a vacant building, or a massive parking lot.  My guess is that, in the intervening years, other national chains will stake their claim to vacant lots in Five Points South, and the negotiations will continue but under increasingly stricter design parameters with each iteration.  Eventually this bureaucratic routine might even encourage Chick-fil-A to partner with residential or office developers for a collaborative design process in urban settings.  Until then, Midtown Birmingham gets a new restaurant, and the commuters who shun it for its lack of a drive-thru still have plenty of other options—out in the burbs where they live.

PrevModernism and self-reflection.
Even test-market suburbs get caught in the tidal wave of low-income housing.Next