Bastrop, Louisiana: where streetscapes get a much-unneeded boost.

In recent years, communities large and small have sought new approaches to restore the vitality of their historic business districts.  By this point, virtually everyone can think of a municipality with an old downtown that really does feel like it’s the center of it all: fully occupied buildings, people milling about.  The success stories exist.  But that doesn’t mean it’s getting any easier.  By no means are they abundant, and, after decades of disinvestment, I suspect we’ve lowered our standards for what constitutes a flourishing city center.  A town of 10,000 with five operational restaurants in the old downtown buildings is cause for celebration, and rightfully so.  Twenty years ago, such conditions might have seemed unattainable.

But even a 50% occupancy rate for the old business district has eluded many other cities and towns.  Over the decades, factors contributing to downtown disinvestment have become increasingly complicated and the design solutions ever more nuanced.  I’ve written before about the negative influence that automobile dependency had on small towns, but it clearly isn’t the only phenomenon that contributed to their virtual demise.  The basic cadences of consumerism have changed in the last half-century; the greater dependence on wholesale merchandising and standardization cataclysmically altered the requisite size and internal configuration of stores.  Now much of our shopping takes place at big boxes that front a vast parking lot.  The growing dominance of online shopping is likely to foment another retail revolution, and, if the Internet eventually dictates how the majority of us shop, it remains to be seen how our built environment will adapt—if it is even capable.  Meanwhile, as more small towns seek to repurpose their old commercial centers so they become a viable destination once more, many civic leaders are finding that a well-scrubbed streetscape and a good PR campaign just won’t cut it.

Thanks to persistent technological innovations and unforeseen sociopolitical considerations, the very dimensions that governed good urban design have irrevocably changed.  The most obvious manifestation of this cultural seism is the availability of parking: since the majority of people now depend on private vehicles to get around, will these old downtowns originally designed for pedestrians ever be able to accommodate cars with the space they need?  Is demolition of some of the old downtown buildings the only real solution to open up more available space?  And, if so, won’t the absence of those demolished buildings create fewer opportunities for the commerce necessary to convince people to visit the downtown in the first place?  Countless municipalities of all sizes have squared off with this conundrum, finding answers with varying degrees of success.

A town like Bastrop, Louisiana in the photo below, benefits at the very least from having a clearly articulated center. 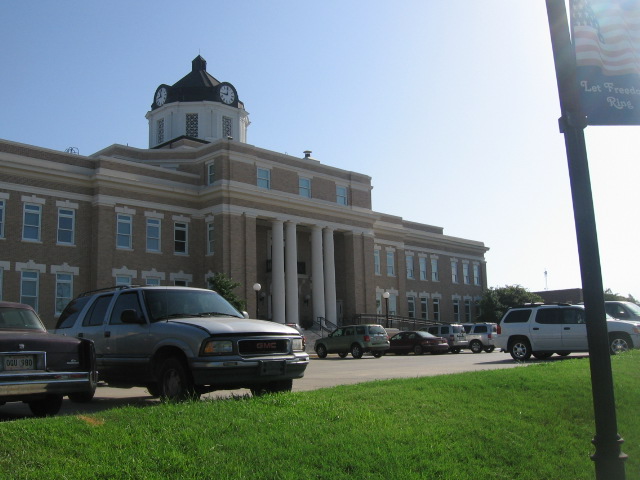 It is the seat of government for Morehouse Parish, evidenced by courthouse resting in the dead center of town.  And like many towns of its size (approximately 12,000 inhabitants), older commercial buildings wrap around all sides of the central courthouse square. 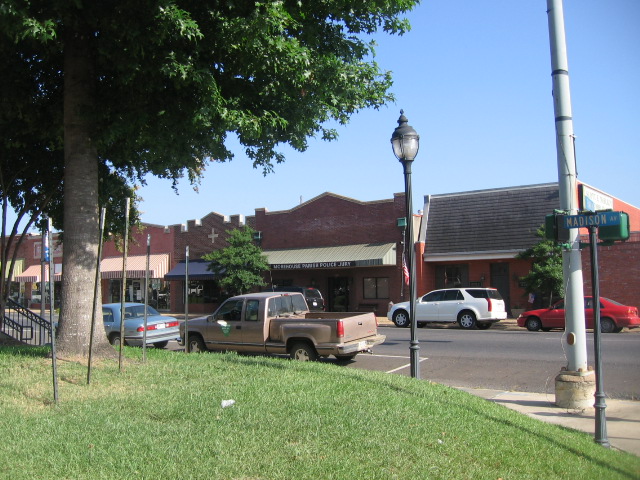 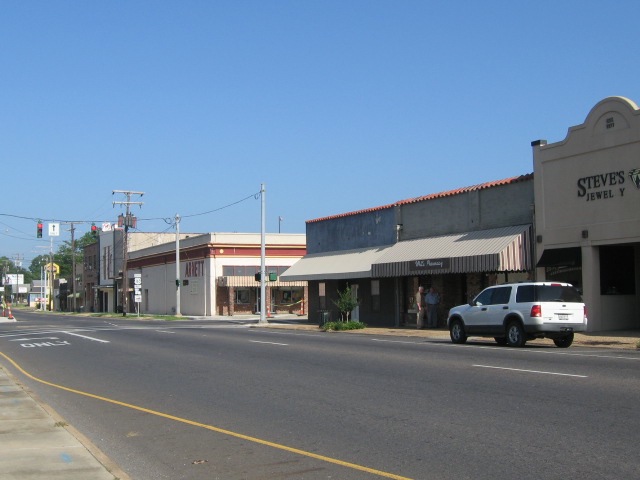 In a more heavily urbanized part of the country such as the Lower Midwest, this configuration is the standard for county (or parish) seats.  In Louisiana, it is comparatively rare, with three primary explanations.  First of all, the more rural parts of the state have such sparse populations that the seat of government may be less than 2,000 people—not large enough to justify a downtown with a full central square and four blocks of perimeter commercial buildings.  Some parish seats are little more than a cluster of buildings stretching on both sides of the street near the rail depot, crowned by a humble administrative center.  Secondly, Louisiana parishes do not always centralize the government in a single municipality: sometimes the judiciary sits in one community and the governing arm (usually called a “police jury” in Louisiana, just as it is in Morehouse Parish) sits in another.  The scattering of government buildings across multiple locations in a parish further dilutes the likelihood of businesses and administrative services aggregating in a well-developed downtown.  Lastly, Louisiana is among the less incorporated states in the country.  A higher proportion of governance takes place at the parish level than even most southern states, because the state has relatively few incorporated municipalities.  Compared to neighboring Mississippi, where even the most rural counties have at least one incorporated town (and usually two or three, if not many more), several parishes have no incorporated areas, including the parish seat(s).  A paucity of municipalities translates to fewer city halls or other civic buildings that typically occupy a downtown.  In having most of the characteristics of a parish/county seat, Bastrop is unusual by Louisiana standards, particularly the more rural northern half of the state.

Downtown Bastrop is therefore more urbanized than many other towns.  It has a solid architectural fabric to work with—maybe not as many multi-story buildings as you’d see in a county seat in Yankee country, but the structures still front the street and collectively form a downtown that is suitable for pedestrians and easy to navigate. 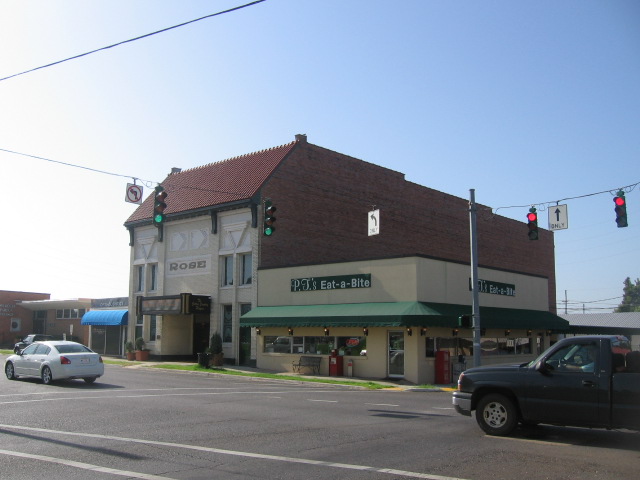 Nonetheless, Bastrop faces formidable challenges in revitalizing its downtown, because the prevailing economic tide in the region isn’t just encouraging migration away from the old town center—people are leaving the region altogether.   The city’s biggest recent blow took place in 2008, when Memphis-based International Paper Company announced the closing of its Bastrop mill, which forced over 500 workers out of jobs and no doubt sent many ancillary businesses into retreat.  Meanwhile, a number of poultry plants in surrounding parishes closed down in the ensuing months.  State subsidies managed to stanch some of the hemorrhaging jobs by incentivizing one poultry company to purchase the shuttered factory of another, but the census reports cannot conceal the fact that both Bastrop and its environs are struggling: Morehouse Parish has been losing people since 1980, and it shed 9.8% of its population in the last decade, a new high.  Neighboring parishes aren’t faring much better: East Carroll Parish to the east and Richland Parish to the southeast have also lost population from 2000 to 2010.

Despite these hurdles, downtown Bastrop shows evidence of streetscape enhancement projects that typically intend to add a new sheen to downtowns.  The west side of the courthouse square particularly caught my attention: 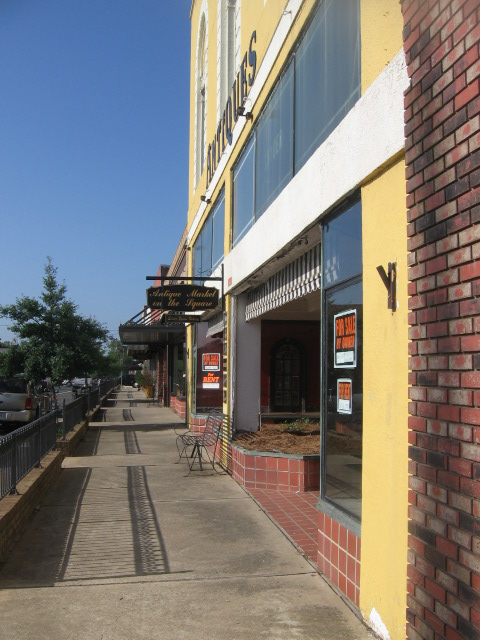 It features a generously wide sidewalk, with a protective wrought-iron gate stabilized by brickwork separating the pedestrian path from the street.  Healthy street trees at equal intervals provide an additional buffer.  But there’s something strange about how these are arranged, which the above photo deliberately obscures somewhat.  The next two photos, however, do not. 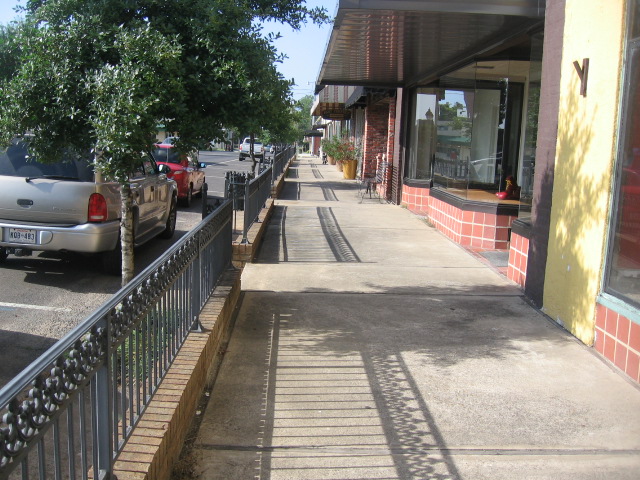 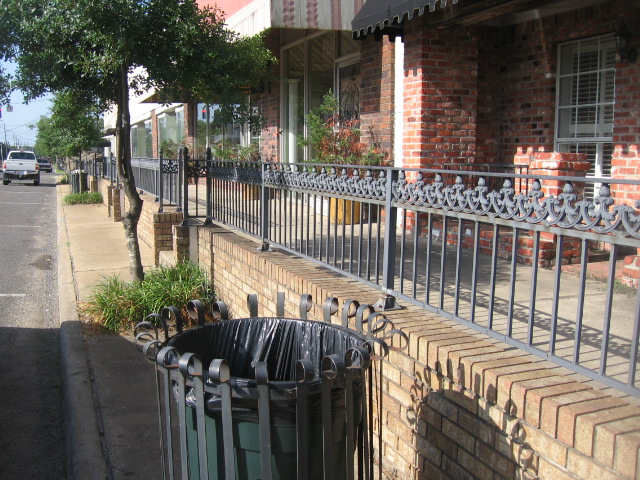 That’s right.  The sidewalk is at an entirely different grade than the street level, with a difference of close to two feet.  Those gaps in the wrought-iron gate?  Access points with a few stairs. 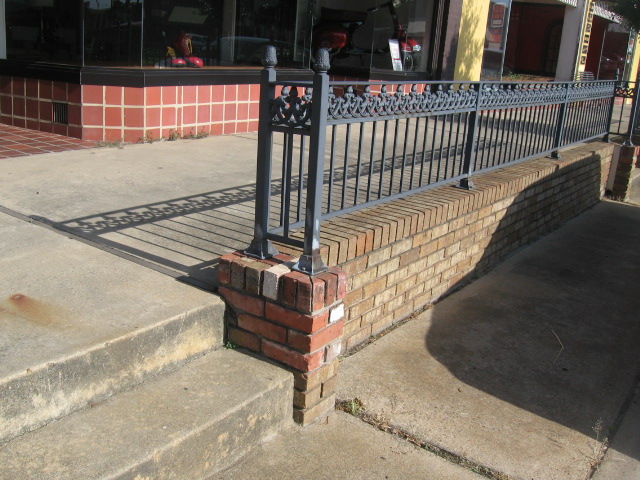 Bastrop, like most of Louisiana, is not exactly a city of rugged topography.  And none of the other blocks that front the courthouse square have such a grade change.  Look at the northeast corner of the square, for example. 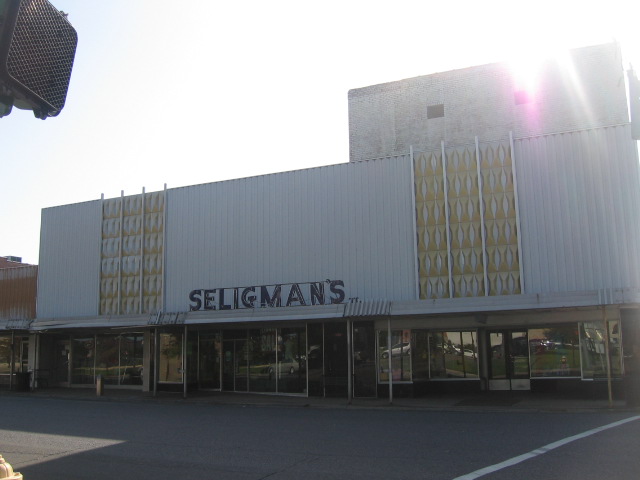 Nothing unusual about the curb separating the street from the sidewalk.  (This photo also gives me opportunity to promote two older blog posts: the 1950s-era Googie façade to this old building recalls an essay from not so long ago on Thibodaux, Louisiana, while the probable Jewish last name evokes an older, extensive exploration of Jewish settlements in the rural South.)

So why are the sidewalk and the storefronts elevated on the western block?  In terms of the buildings, I’ve exhausted both my gray matter as well as Hercule Poirot’s and can’t really come up with anything; perhaps some dusty city archives would explain the rationale for this, but it has lost me completely.  As for the sidewalk, it obviously has to meet the buildings to provide access, but this streetscape improvement seems a bit too au courant to date from the same time period of the buildings.  At the same time, it neglects one crucial consideration visible in most “improved” downtowns: access for persons with disabilities.  Those little stairs leading from the on-street parking to the sidewalk aren’t the least bit compliant with the Americans with Disabilities Act.  Fortunately, the corner crosswalk seems to be compensating for this major oversight: 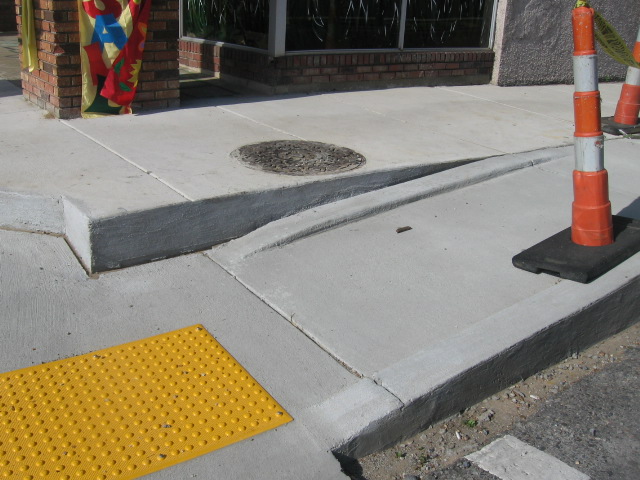 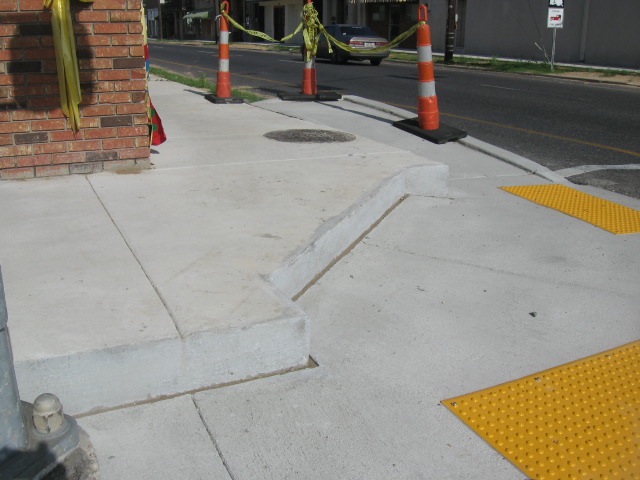 But this must be a recent modification; the cement doesn’t even look fully dry.  At least a ramp allows people in wheelchairs access to the handful of occupied storefronts along this block, but the lack of any further ramps means people in wheelchairs are trapped along a sidewalk/corridor, at least until the block ends at the next corner.

Is this observation of mine a niggling one?  Absolutely.  I’m not going to begin to advocate that Bastrop Public Works should perform invasive surgery on this attractive sidewalk at this point.  The engineers have made corrections to mistakes from the past, and the sidewalk is broadly though not optimally accessible.  But the interventions demonstrate how relatively fixed, immobile infrastructure cannot simply mould itself to shifting cultural values.  In 1920, when downtown Bastrop no doubt was the retail/commercial epicenter of Morehouse Parish, a sidewalk with a huge grade change posed a burden to practically no one; you would deal with it simply by stepping up.  By today’s standards, such an approach excludes a significant enough portion of the disabled population that it became codified as ADA in 1990.  Now such a design is unacceptable, and even ADA has undergone modest modifications since its enactment to accommodate other constituents previously ignored.

I have no doubt that somewhere in America, right at this moment, a construction team is building a publicly-supported project that a future generation will recognize as a flawed design.  It might even become unlawful.  We aren’t prescient, but we should at least remain aware that we will never fully reach our goal, because the process of achieving them will only elicit further hurdles.  And we must temper our nostalgia for old-timey downtowns with a recognition we really cannot go back; in many regards, we wouldn’t want to.  All the words we apply—“revitalize”, “restore”, “revert”, “return”, “reinvent”—use the Latin prefix re-, which can mean either “again” or “backwards”.  The eye must remain on the future, not only for the sake of our evolving downtowns, but that is where a city like Bastrop, still sore from recent job loss, can throw the rest of its skin in the game.

PrevNo need to move mountains; just plant the right kind of trees.
Surrendering to the flow.Next

6 thoughts on “Bastrop, Louisiana: where streetscapes get a much-unneeded boost.”