With any urban infrastructure project dedicated exclusively to separating pedestrians from vehicular traffic, the benefit is typically a double-edged sword.  While the investment may allow pedestrians to cross on their own volition at any point in time, it also expedites the flow of traffic at higher speeds through what could be a pedestrian-dense area.  Instead of improving the ability for foot-travelers and wheels to engage more harmoniously, it forces them into non-engagement.  Any prudent public works project aims to improve the level of service for as many modes of transportation as possible, providing an aggregate net benefit while culling from the Hippocratic oath “primum non nocere” (first, do no harm).  Obviously not every transportation enhancement meets all of these ambitions, and all too many meet none of them.  But a radical earth-moving initiative that places pedestrians and vehicles at completely different altitudes will at least induce a formidable change on the landscape—whether the change is necessary or even positive requires evaluation of an individual project’s merits.

The average university campus is a often a wonderful laboratory for pioneering innovative means of traffic management or transportation enhancements: they usually have the combination of an on-site residential student population that is heavily dependent on their two feet for getting around, coupled with a high concentration of jobs that draw vehicle-dependent commuters over a broad radius.  Many universities in urban settings are also benefit from proximity to major transit stops.  Washington University of St. Louis is no exception. 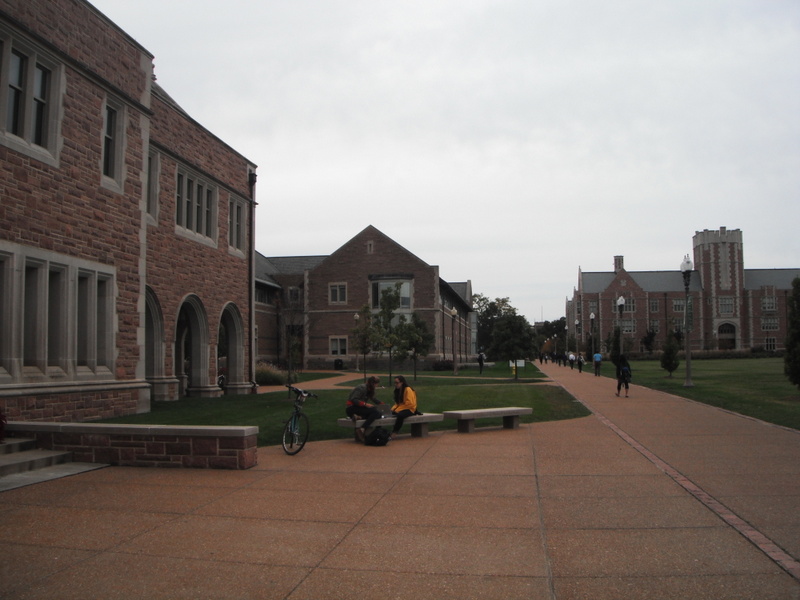 Straddling multiple political jurisdictions, virtually any major street improvement project will inevitably encounter its share of hurdles in terms of financing and implementation.  While the majority of the Danforth Campus (primarily undergraduate) rests within unincorporated St. Louis County, portions of it sit within the municipalities of Clayton and University City; the actual City of St. Louis only contains a small fragment.  The Forsyth Pedestrian Underpass pictured below ostensibly underwent extensive repairs earlier in the year, with costs split between a federal grant and Washington University. 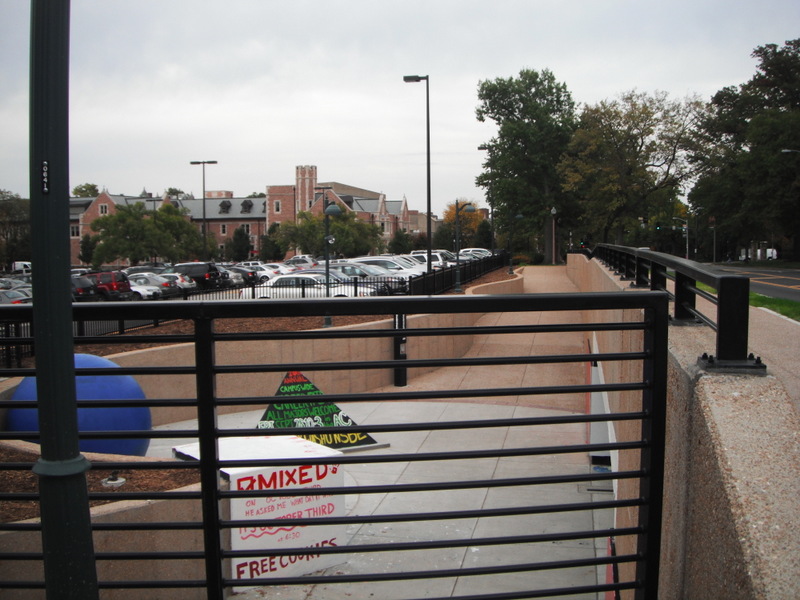 It provides completely protected, ADA-compliant access under Forsyth Boulevard, at the approximate location indicated by the blue rectangle in the map below. 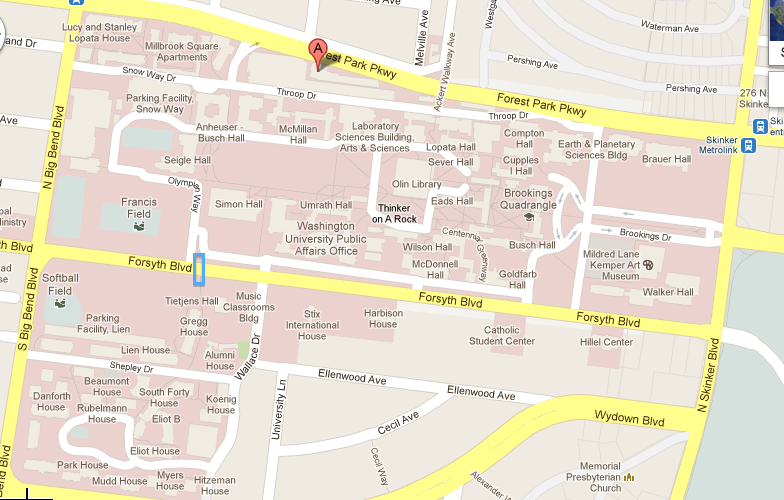 More than half of the Danforth Campus sits on the north side of the road, but a considerable expansion continues south, including the majority of the residence halls.  No doubt this is a heavily traveled passage, and by most metrics, the design appears effective.  Here’s an approach from the north side of the road, heading through the parking lot southward toward the underpass: 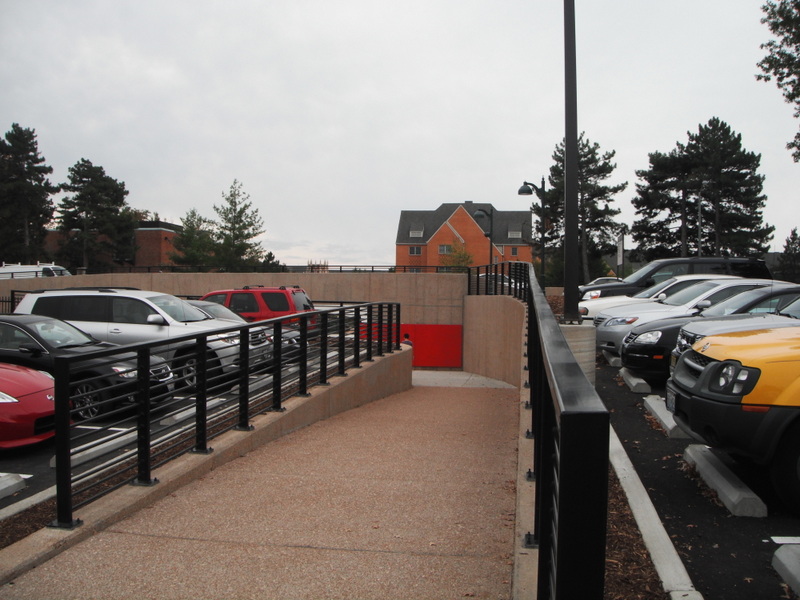 Just a bit further, with the underpass in sight: 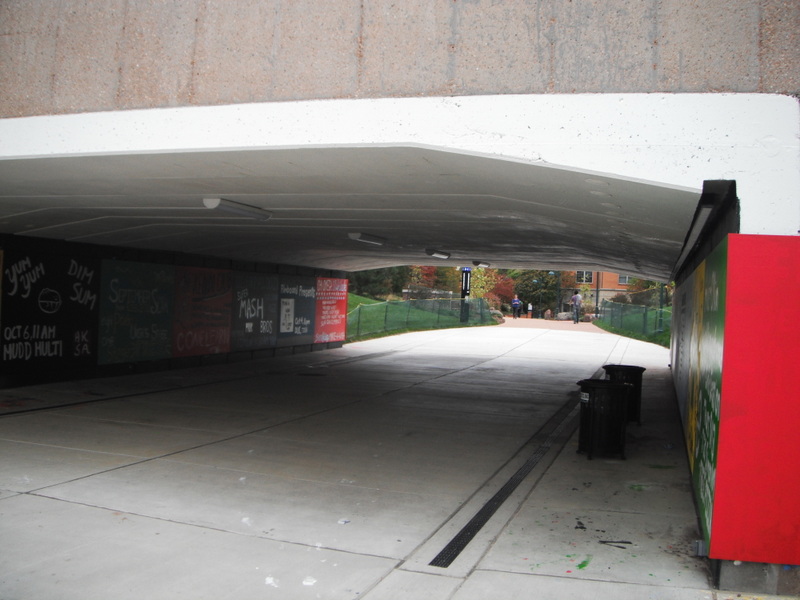 And pivoting to the left, another ramp that connects directly to the sidewalk along Forsyth. 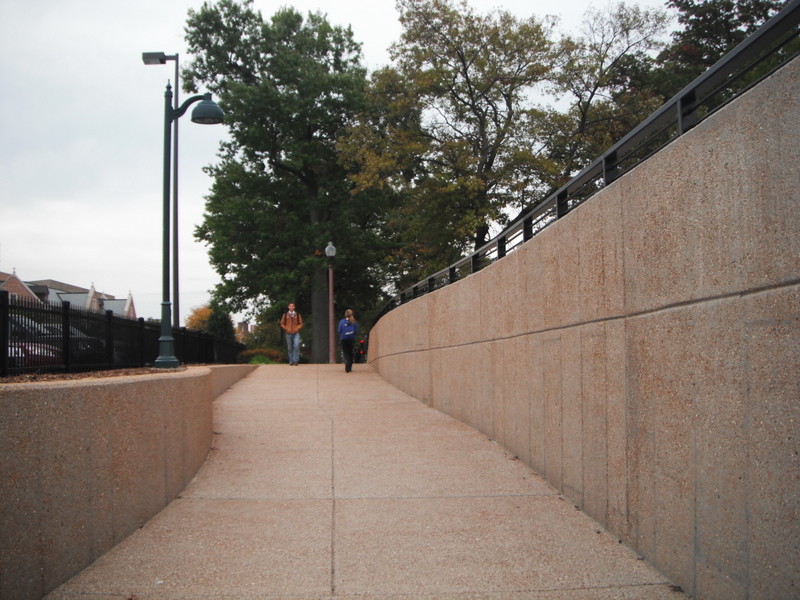 A fairly obvious but nonetheless smart decision was the inclusion of visual elements that enhance underpass beyond its utilitarian aims.  For example, the walls in the tunnel serve as a series of rotating murals, promoting events (provocatively at times) that will soon take place on campus.  No doubt the displays here change monthly, if not more frequently. 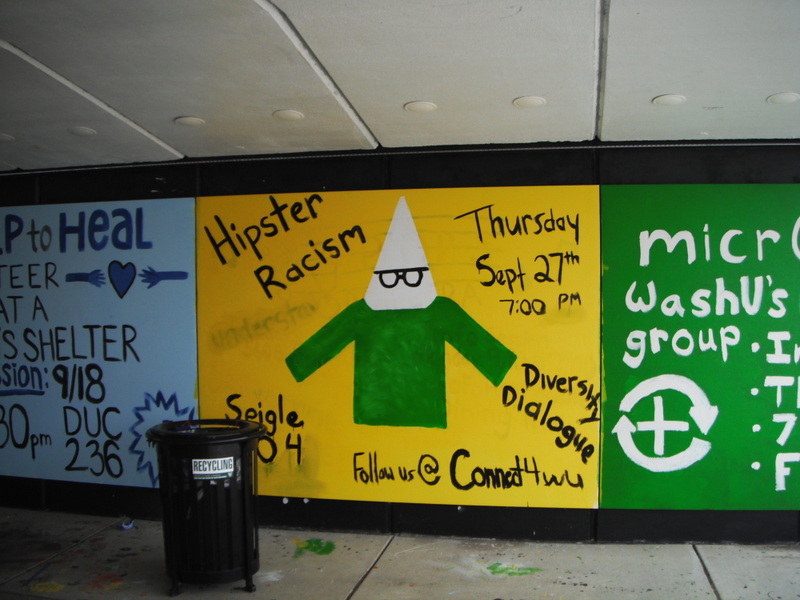 And then, continuing through the Forsyth Underpass and looking behind, the sculptural display (a blue sphere, among other things) through the tunnel. 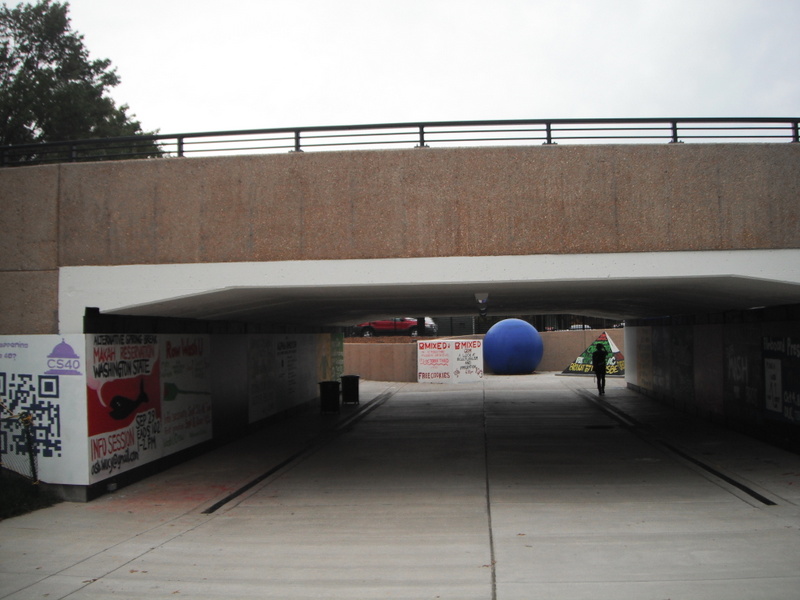 Had the underpass lacked these colorful flourishes, it would be inevitable that some vandal would insert some on his or her own.  Murals, no matter how crude, have an uncanny ability to deter graffiti artists, who more often than not seek an unmonitored blank canvas.  If graffiti were to accumulate along the Forsyth Underpass, it would immediately convey a sense of insecurity to many users; more likely than not it would encourage other acts of vandalism and perhaps eventually more serious displays of criminality, operating under the elementary tenets of the Broken Windows Theory which I have blogged about in the past.  Another recurrent problem with underpasses, particularly if they are long, is that the absence of natural light renders them shadowy and uninviting, leaving dark corners that could encourage urination or public indecency at best and assault at worst.  Pedestrian advocates typically shy away from underpasses, primarily because they can engender more safety problems than they solve.  The engineering behind the Forsyth Underpass at Washington University seems mindful of the primum non nocere standard: not only does it achieve core functionality, but it also can be informative and aesthetically pleasing.

Despite its general success against many odds, I can’t help but think that the attention to certain details with the Forsyth Underpass also help to shroud its intention to exert a high level of control on its users.  For example, on the south side of the road, pivoting away from the underpass and looking further southward, this is what the pedestrian sees: 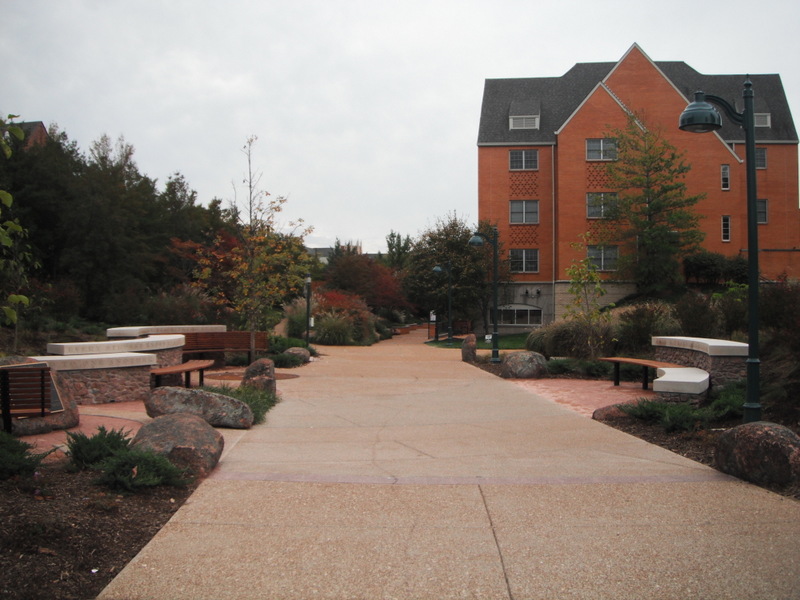 For all intents and purposes, it’s an attractive, heavily landscaped path toward the university’s dorms.  But look to the left: 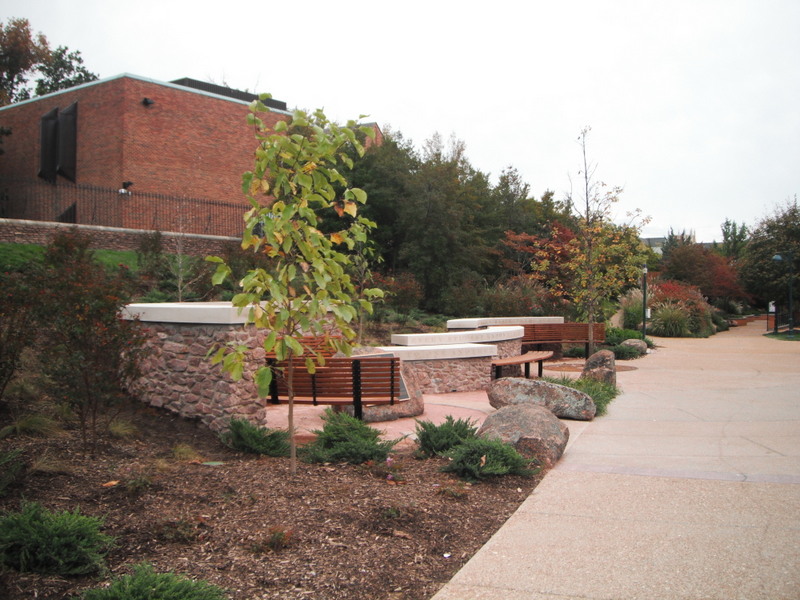 And a bit further: 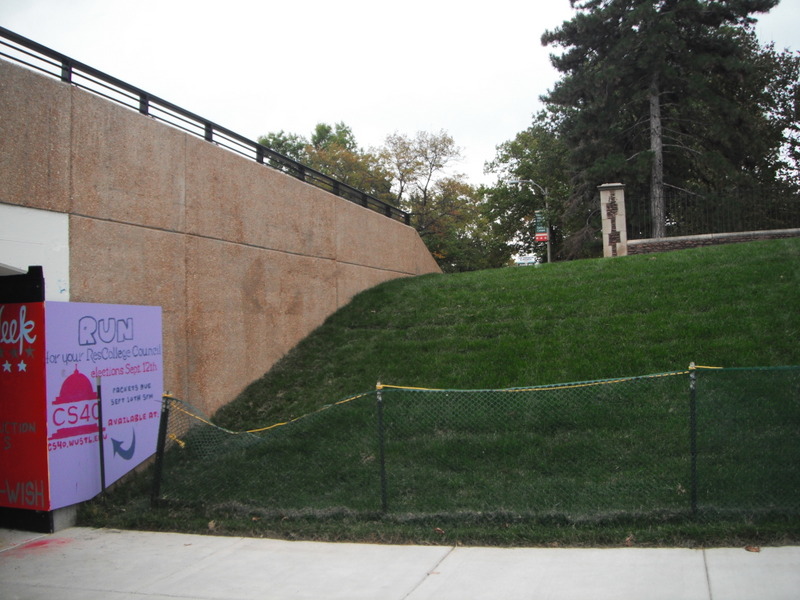 Either shrubbery or a fence makes it impossible to climb that hill to access the sidewalk on the south side of Forsyth Boulevard.  And it is the same way when one pivots to the right: 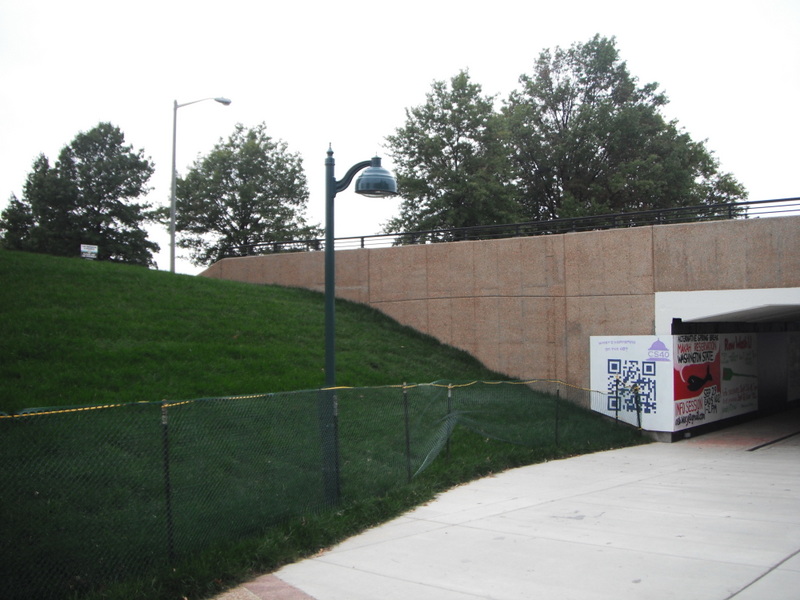 I’m clearly looking a bit backward here too, with the road above.  But still no access.  Even if those fences are a temporary installation (the City of Clayton Public Works website does say that peripheral work will continue into the school year), the construction has provided no paved paths to access this side of the street.  It is almost as though the underpass is funneling students directly toward the dorms rather than allowing them to walk along the road.  Contrast this with the northern side of Forsyth Boulevard, where the ramp provides direct access to the street.  From below (as seen before):

And at the top of the ramp (the railing is visible on the far right): 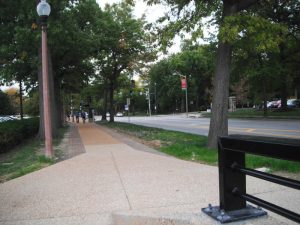 Why is the design of the underpass forcing the students/pedestrians onto a certain path?

That’s not the least of it.  The engineering to the underpass is commendable for not stretching the tunnel to the point that it would be shadowy.  But wouldn’t it be hard for the tunnel ever to be long, considering the width of the street above it?  The previous photo reveals what should be obvious already: Forsyth Boulevard isn’t even a very broad street.  Here’s looking at it perpendicularly southward, with those dorms in the distance: 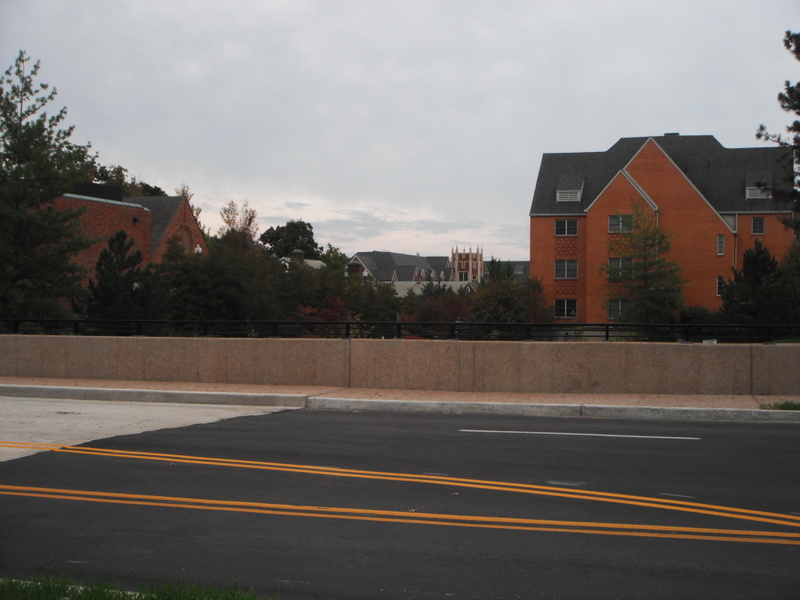 And pivoting a bit to the left: 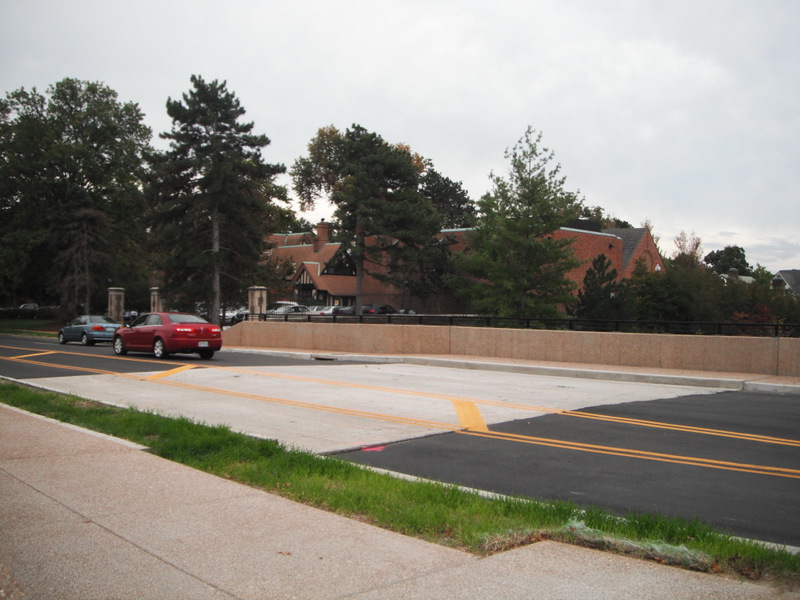 Only three lanes wide.  Was this really a congested enough arterial to justify separating the pedestrians?  I don’t have traffic counts, but a road of this width couldn’t handle more than moderate levels.  It’s only a collector street cutting through a campus, so maximum speeds will never be high.  It seems even more ridiculous to install an underpass, after considering that a conventional at-grade crosswalk sits just a half-block further to the east: 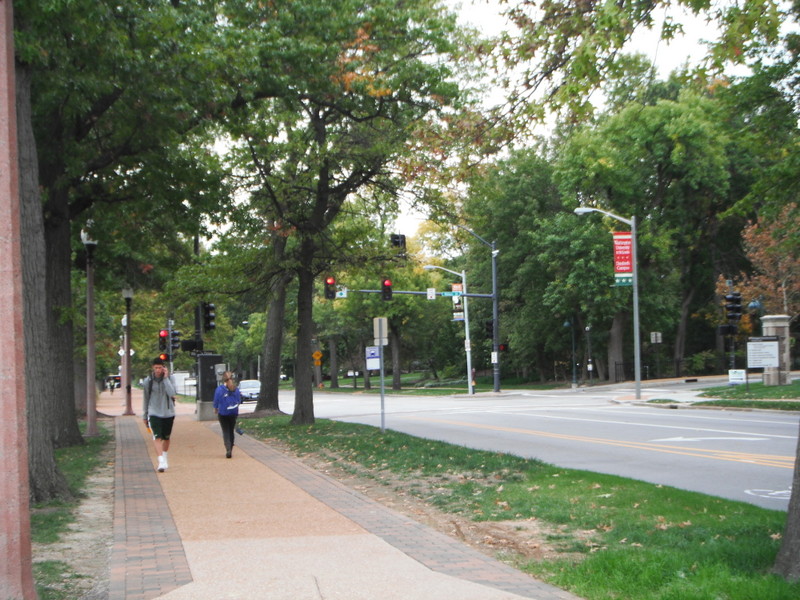 There it is, at the stop light in the distance.  Pedestrians could just as easily cross there, without having to make unnecessary turns to maneuver the grade change of a ramp and underpass.

Was this underpass really even necessary?  Obviously I don’t know the full political implications at play, and with the Washington University campus straddling so many different boundaries, it is possible that quite a few parties were involved in the negotiation.  But the visual evidence increasingly suggests that the Forsyth Underpass is less of an amenity for students and more of a means of discouraging any pedestrian interference with vehicular traffic.  If this mid-block point is a popular means for students to cross from the dorms to primary academic buildings, wouldn’t a simple guarded, signalized crosswalk have been a much cheaper deterrent to jaywalking?  The only conclusion I can draw is that the installation of this underpass exclusively favors vehicles, preventing them from ever having to stop at anything other than intersections with other roads.  Aside from the fact that pedestrians at the underpass don’t have to wait for traffic to clear in order to cross, it otherwise impinges upon their options.  Like the fence at the crosswalk along Chicago’s Michigan Avenue that I observed a few years ago, this expensive public works initiative prioritizes wheels over feet.  University City, Missouri is, by and large, a pedestrian friendly environment (it also has good St. Louis Metrolink access), and it should be, with all those students.  But the deficiencies still abound, proving how difficult it is to unlearn old habits from nearly a century of placing the car at the top of the cultural pecking order.

PrevSurgeon General’s warning: “It’s Mail Pouch Tobacco. Treat yourself.”
Amidst all the links in the chain, a new shape emerges.Next

One thought on “Tending the student flock.”