I’ve gotten in the habit of dropping the word “meme” into blog articles as though it has become a part of common parlance.  (Come to think of it, I probably overuse “parlance” too.)  The Oxford English Dictionary’s definition of “meme” is that it is “an element of a culture or system of behavior passed from one individual to another by imitation or other non-genetic means”.  The Merriam-Webster Dictionary includes the abstract nouns “idea”, “style”, and “usage” in its definition, but otherwise it says more or less the same thing.  A meme seems to be an inherently sociological phenomenon—the iterations that it encapsulates are antithetical to biological means of transmission.  As of yet, the word seems to evade most thesauruses; as recently as fifteen years ago, social theorists and cultural critics bandied the term around freely, and, inevitably, journalists, who have long perused the corpus of this coterie, picked up the term.  From there it proliferated wildly, almost mimetically, to couch its Greek antecedent.  My guess is that while not every Boomer and Xer is acquainted with the word, it is rare that a Millennial would graduate with a liberal arts degree and not learn to use it correctly.  A meme is not necessarily the same as afad, though most fads originate as memes.  A meme is less temporally ephemeral and rarely as ubiquitous—much like the word itself, most people could remain oblivious to a meme, provided they don’t engage with the specific milieu in which the meme has both spawned and flourished.

If the word still seems shadowy after this definition, allow for a photographic illustration that many Americans have seen even if they haven’t overtly contemplated it. 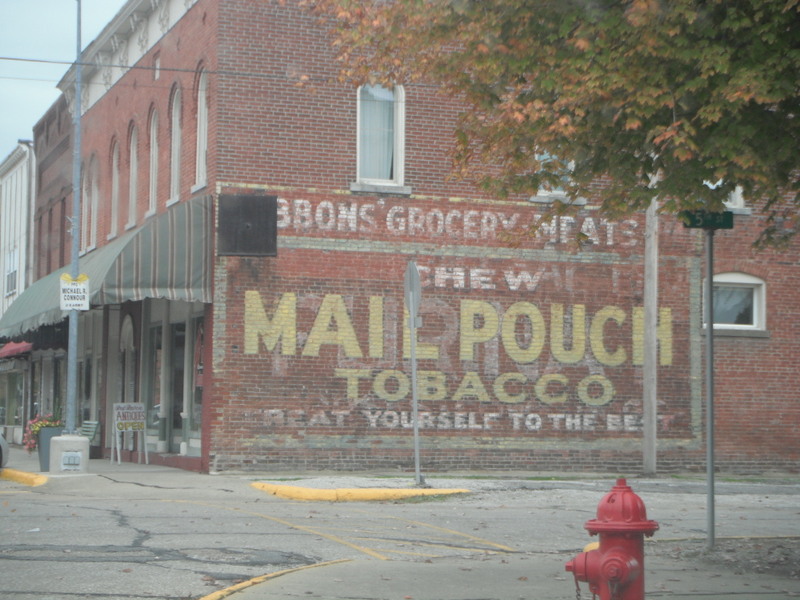 On the side of a building in the two-block main street of tiny St. Elmo, Illinois is a faded advertisement for Mail Pouch Tobacco.  To someone from Maine or Mississippi or Montana it might seem like no more than the vintage bric-a-brac you’d see along the walls of an Applebee’s, but most adult residents of the lower Midwest, Appalachia, or the Mid-Atlantic have seen one in person.  The Bloch Brothers Tobacco Company, founded in Wheeling, West Virginia in 1890, initially resorted to advertising on the walls of commercial buildings such as the one above, or this one below, in Findlay, Ohio: 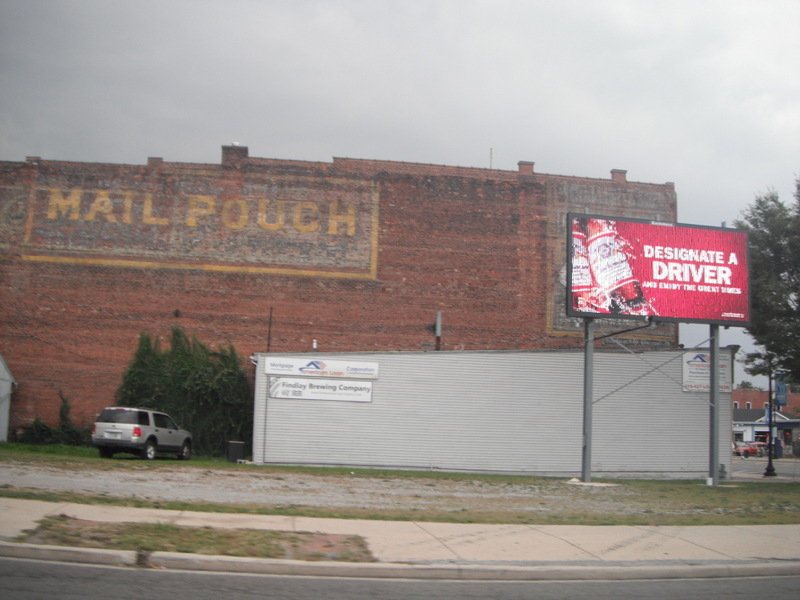 Pretty faded stuff, and this Ohio variant most likely sat behind an adjacent building for many years that eventually faced the demolition ball.

The crisper iterations of the Mail Pouch Tobacco ad—the ones by which it has been immortalized—grace the roofs and sides of wooden barns across the countryside in about a dozen states.  I haven’t come across a good vintage one recently in my travels, so I will have to crib from another source: 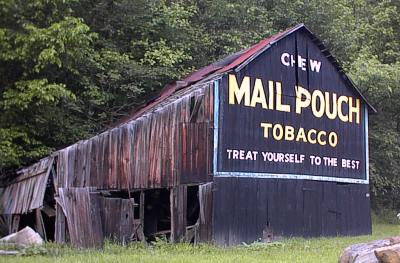 Bloch Brothers Tobacco shifted its focus toward the barns and away from brick buildings a little after 1900.  It doesn’t take a doctorate in economics to guess the reasons: rented advertisement space on rural barns is much cheaper than urban centers (even if many were small towns), and barns are ubiquitous.  Most of the good chronicles of Mail Pouch advertising (such as Jack Goddard’s account of its cultural importance in Beaver County, Pennsylvania) recognize that the rate paid to barn owners of about $1 or $2 a year wasn’t even much by early 20th century standards.  (In the earliest days, they were rewarded with tobacco or subscriptions to The Saturday Evening Post.)  The bigger incentive was that the barns would receive a fresh coat of paint every few years, helping to resist moisture intrusion and extend the lives of the barns themselves.  The relationship between landowners and Bloch Brothers Tobacco Company proved symbiotic: as the program peaked at the halfway point of the century, historians estimate that the standardized Mail Pouch Tobacco advertisement graced the faces of over 20,000 barns.  Other companies such as Burma Shave and Beech-Nut quickly caught on to the effectiveness of this carpet bomb approach, but Mail Pouch Tobacco remained pre-eminent.  The campaign suffered a setback with the passage of the Highway Beautification Program of 1965, which seriously restricted the proximity of billboards or other mounted advertisements along federal highways—a policy that tacitly acknowledged Mail Pouch Tobacco ads as visual blight.  Many proponents of the barn painting no doubt saw this as an elitist gesture, prompting officials (at the behest of West Virginia Senator James Randolph) to adapt a 1974 amendment that exempted these distinctive tobacco barns from the restrictions, by classifying them as “folk heritage barns”.

In the second half of the century, the continued survival of Mail Pouch barns depended heavily on a single individual: Harley Warrick of rural Ohio, who, by his own estimations painted and re-painted over 20,000 barns.  The logo for mail pouch, Spartan but assertive, depended on versatility because the “easel” wasn’t the least bit standardized; no two barns are identical.  Warrick and his team averaged over 200 barns a year and could, at the height of his productivity, complete two full ads in one day.  This most famous barn-painter retired in 1992, and the Bloch Brothers Tobacco Company (after decades of merges and acquisitions, called Swisher International Group, but still based in Wheeling) suspended the barn painting campaign at this point.  Warrick died in 2000, but his legacy survives through American primitive/folk art expositions hosted by the Smithsonian and other globally recognized institutions.

Unfortunately, in the near future, it’s possible that museum exhibits may be the place to encounter Warrick’s oeuvre.  Time hasn’t exactly been kind to the Mail Pouch campaign; even in his lifetime, Warrick estimated that less than 1,000 barns survive.  Lacking an organized restoration initiative, their numbers are even fewer today.  Passive decomposition is probably a greater culprit than active demolition; anyone driving across a 100-mile stretch of the rural Midwest or Northeast will need more than fingers and toes to track all the collapsing wooden barns.  Mail Pouch Barn Stormers groups are doing their utmost to preserve this endangered piece of Americana, and this initiative proves more than ever that its cultural ascension to the status of a meme: it permeated enough of the collective consciousness to foment a widespread emotional connection.

No example that I have seen better conveys Mail Pouch’s expressive power and resiliency than this barn on a rural road not so far from Tiffin, Ohio. 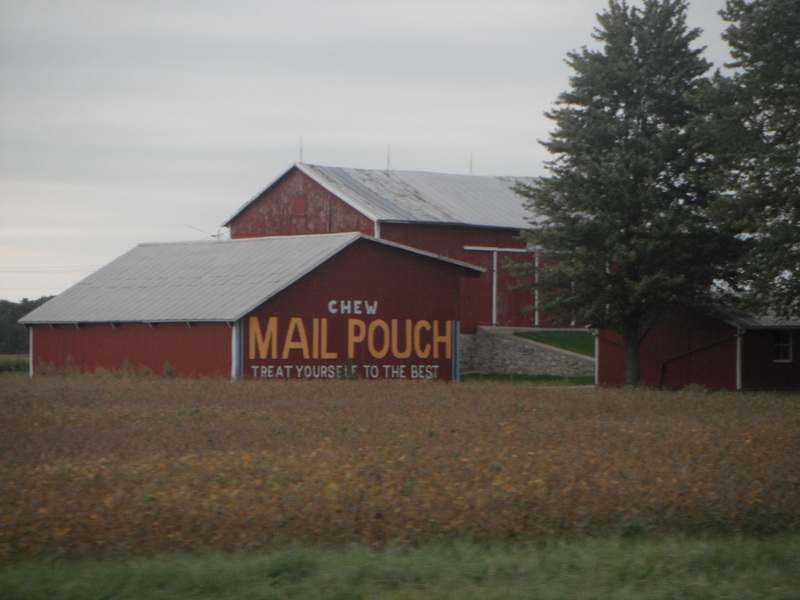 Yep, it’s a bona fide ad poking up from over the field.  I got a little closer so I could appreciate it. 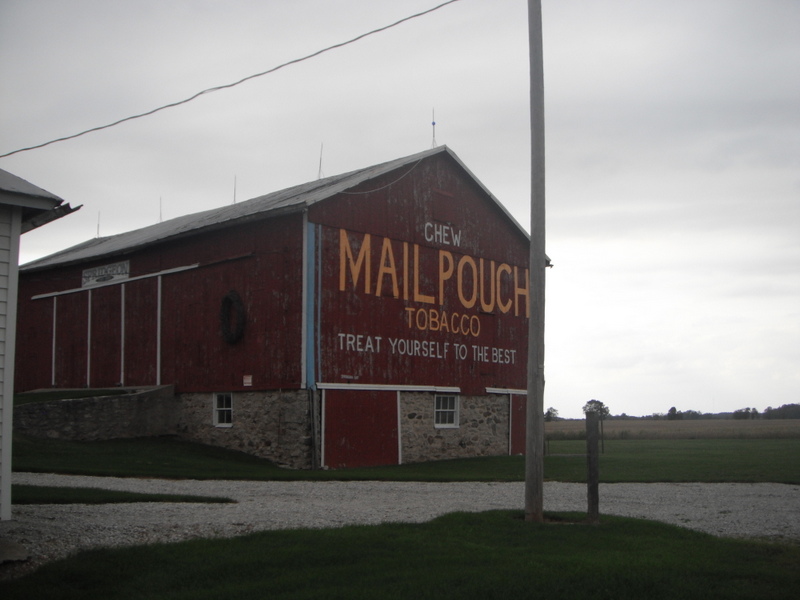 Hardly a Mail Pouch aficionado, I could still tell that something wasn’t quite right about this.  The colors were legitimate, including the pale blue stripes to the left and right of the sign.  But the letters were too tall and skinny, each row was spaced too closely to the next, and the centering for the “TREAT YOURSELF TO THE BEST” was off.  And the colors just looked way too bold and fresh for it to be even from Warrick’s final years on the job in the early 1990s.  Was it a hack job?  Not even. 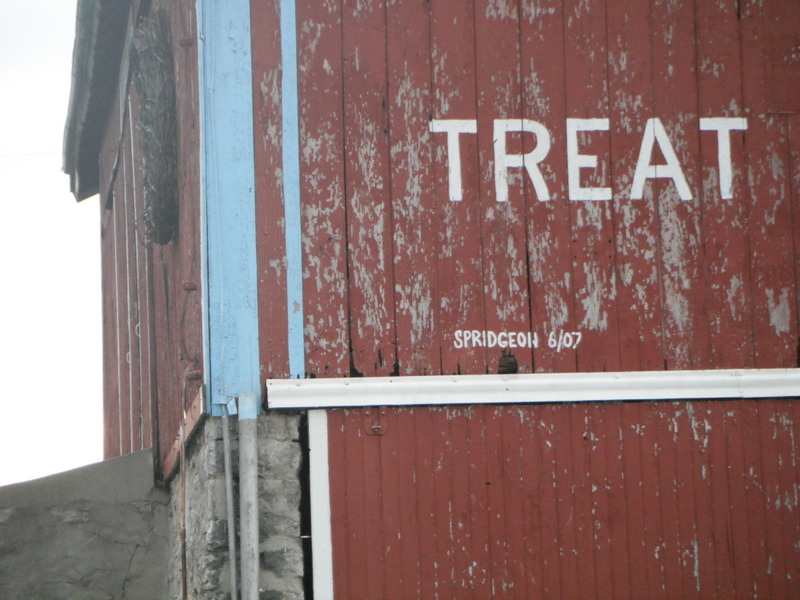 Nothing so insidious.  Though the red paint is already widely chipped, the lettering is still in its toddler years, dating from just 2007.  It might not be polished, but it’s a tribute if there ever was one.  Clearly at least a handful of folks in north-central Ohio want to keep the Mail Pouch legacy from fading into extinction, even if it’s at the expense of typographical fidelity to the brand.

Perhaps Mail Pouch Tobacco barns aren’t as an legitimate of a meme as even some contemporary fads.  After all, the campaign was hardly a bottom-up effort; the Bloch Brothers clearly saw a brilliant promotional opportunity and took advantage of it.  It didn’t emerge organically.  But it surely owed at least part of its repetition and proliferation—and it owes virtually all of its continued survival—to a certain “contagion” with humble origins: Landowner A saw what Landowner B was doing to keep his/her barn in tiptop shape, so why can’t I do it too?  Paradigms of contemporary life would suggest that urban settings are the best crucible for the dissemination of memes: after all, they flourish when an agglomeration of people can lubricate them, so to speak.  But billboards continue to thrive in both urban and the most rural of settings; in the age of information, a cultural artifact can “go viral” without having any physical incarnation.  Sites like Youtube spawn digital memes almost every day.  Mail Pouch Tobacco barns are a commodity (I cannot verify if the tobacco is even available for purchase these days) that owes much of its contemporary stewardship to its increasing scarcity.  Though rural in origins, a small-town folk historian and an urban hipster who bought a shirt at Zazzle.com most likely share a core emotional affinity for the advertisement, and who am I to judge the sincerity of their fondness for the meme?  Both depend on the Internet to perpetuate their admiration of this iconic cultural gesture.  I suspect the barn painters outside of Findlay used an online photo as their source of inspiration too.