Installing one life form; inhibiting another.

I can’t resist the occasional opportunity to showcase egregious impediments on sidewalks, particularly in locations where it seems like the arguments for pedestrianism are strongest, like in the downtown of this country’s 29th largest metropolitan area, Kansas City, Missouri. 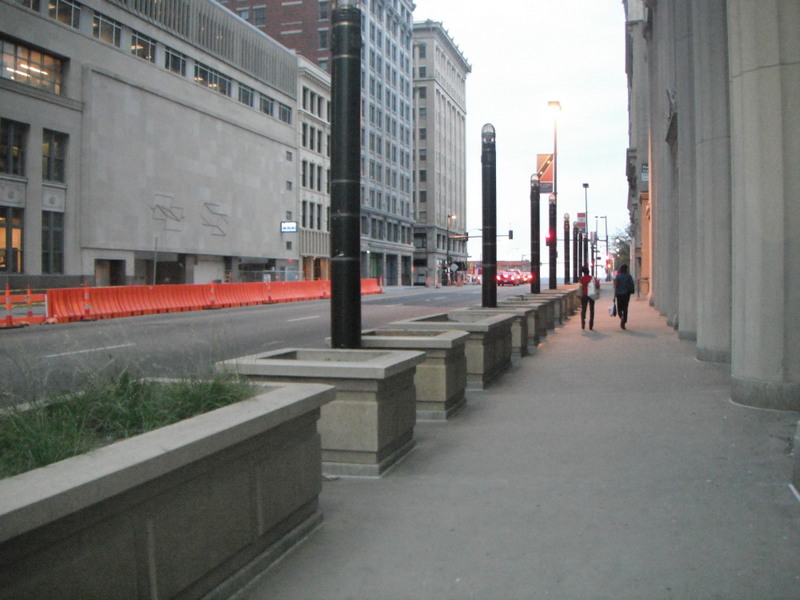 The east side of Grand Boulevard just north of East 10th Street offers a continuous, urban street wall abutting a generous sidewalk, but what’s going on with those planters to the left of the two pedestrians in the distance?  It’s possible that in early October when I took these photos, the seasonal plantings had already retreated, but it does seem strange that it’s hard to find even a blade of grass in any of them.  They’re bulky and imposing on their own terms, but the lamps spaced between every other planter box—bearing a passing resemblance to the emergency lighting commonly seen on university campuses—are the real puzzler here.  The lighting narrows the gap among the already meager intervals between planter boxes, discouraging all but the skinniest pedestrians from squeezing through at the spaces that are still free of lamps.  In short, it forms a wall separating the street from the sidewalk.

It’s a safe bet that the planters are more of a deterrent to jaywalking than a decorative object.  As this Google Street View from June 2011 indicates, even during more verdant times, the investment in maintaining the shrubbery is minimal.  The more recent photo suggests that whoever manages these planters has extirpated most of the bushes altogether.  I’m not such a pro-pedestrian ideologue that I believe jaywalking should be acceptable under any circumstances, but this big of a partition between the sidewalk and the road serves to inhibit lateral movement even when there is very little vehicular traffic—like 5:45 pm when I took this photo.  It vaguely resembles the curbside fences one finds in authoritarian Singapore to prevent jaywalking.

Stepping back to the other side of 10th Street reveals that the impediment is even more elaborate than the first photo indicated. 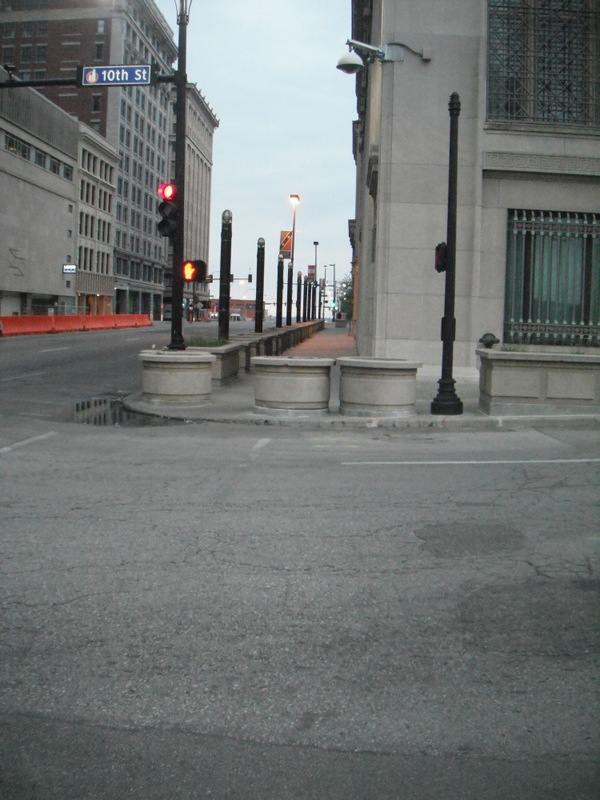 Right at the crosswalk sit four more cylindrical planters, ostensibly squeezed in almost as an afterthought.  Did the boxes along the sidewalk prove insufficient?  My suspicion is that these corner plantings intend to discourage “curb jumping”, when a vehicle a large hitch turns the corner too tightly.  Last year, with the help of photographer Nicolette English, I pointed out a number of rural examples where semis had clearly jumped the curb with their hitches, causing damage to infrastructure (and, most likely, to their hitch).  In many older downtowns, the narrowness of the road already imposes a certain degree of caution among truckers, but many of Kansas City’s streets are wide enough that they depend on other obstructions in order to protect crosswalk signs, streetlights, and other sensitive streetscape devices.  In addition, the small radius created by the design of the curb already requires a sharp turn to maneuver here, so it’s hard to imagine a large vehicle could turn right onto Grand Boulevard from 10th Street at high speed.

Whatever the intent of the concrete planters in terms of separating transportation modes, they create an unambiguously negative effect at this intersection.  Again, Google Street View depicts the intersection during sunnier skies, but meager greenery only does so much to mitigate the appearance of a small fortification surrounding this already imposing building (with metal bars on all the windows, no less).  Bear in mind, at this corner the sidewalk’s junction with the intersection allows for a crosswalk—traversing the road would not qualify as jaywalking under any circumstances.  But the design of these planters obscures the access from an already faded crosswalk, so that a pedestrian unfamiliar with the environment may question whether he or she is allowed to cross.  Wheelchair dependent persons would likely find it particularly difficult to negotiate from the street up the curb, since the grade change is big enough potentially to violate ADA standards—it’s not a perfectly smooth ramp up to the sidewalk—and may help to explain a puddle during an otherwise dry period.  But then the wheelchair still has to maneuver around those curvy planters.  Just look at how unaccommodating it is from this angle: 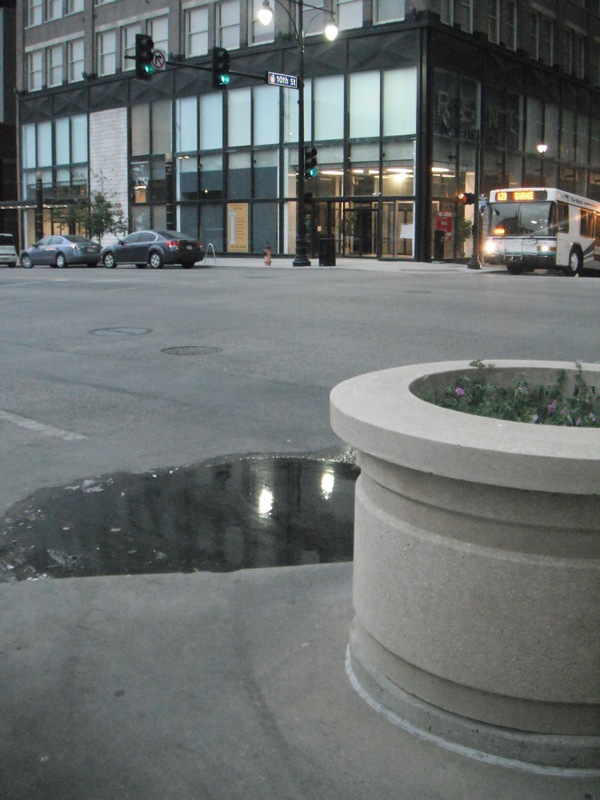 If anything, this enhancement to the streetscape carries with it an ancillary goal: to deflect attention from the fact that Grand Boulevard is alarmingly devoid of life.  After all, I took these photos just after the close of the workday.  My suspicion is that most downtowns can claim far more street trees, benches, planters, decorative lights and informational signage than they ever did in the 1940s, for example—those days when downtowns were still the hub of commerce.  In an era when downtown Kansas City was the epicenter for agribusiness across a broad swath of the Great Plains, these sidewalks would have been flooded with people, and the installation of planters would not just have seemed unnecessary, it would have been a downright irritation.  These days, although the city’s center has benefited from heavy investment in an attempt to enliven the downtown and encourage residences (most notably through the high profile Power and Light District), many of the historic buildings in the northern half remain underutilized if not altogether vacant.  The notion that a throng of pedestrians will need to cross 10th Street at Grand Boulevard is a pipe dream, so impediments like these survive, both to endow some deliberate sidewalk clutter in the absence of pedestrians and also because so few pedestrians are there to flag this as an obstacle.

By no means am I intended to denigrate Kansas City exclusively here—urban settings share this same self-defeating dichotomy across the country and at a variety of scales.  For example, I pointed out a costly streetscape enhancement project in the small town of Edinburgh, Indiana a few years ago, which helped populate the main street with trees, lights, hanging flowers—everything but people.  Sometimes the nuanced placement of these enhancements is all it takes to morph them from an enticement toward street life to a repellent.  Many cities in developing countries will strike the typical American eye as far more vibrant in terms of busy sidewalks, yet their impecunious municipal governments rarely have the money for all those fancy benches, trees, or landscaping.  But they do have obscene traffic, exacerbated by the glut of jaywalking pedestrians.  No doubt the aesthetic distinctions between densely populated chaos and sterile order owes a great deal to individual preferences, but just imagine if each one of those planters along Grand Boulevard were transformed into a person: the character of the street would change dramatically.  It’s not just that it would host organic life—it already does that when the plants are in season and maintained—but the street would host mobile, volitional living things, just like it does at the Power and Light District a few blocks away.  All the concrete-encased landscaping in the world can substitute for that.

PrevFrom bookstore to lobby?
Because the rich can afford cosmetic surgery.Next

4 thoughts on “Installing one life form; inhibiting another.”