Because the rich can afford cosmetic surgery.

While most evidence suggests that the future of the American metropolitan area will hinge upon further decentralization—after all, it has continued unabated for the last seventy years—most large metros have a few suburbs that buck the trend.  A few years ago I featured Bexley, a suburb of Columbus, Ohio, which largely matured in the middle of the 20th century as an affluent enclave just a few miles from the city center.  Fully built-out and benefiting from highly rated school systems, Bexley has always been an comfortable suburb, and the passage of time hasn’t changed this: its population has remained primarily stable over the years and it continues to be one of Columbus’ most desirable addresses.

University City, Missouri, the focal point of this blog, has played a more complicated role in metropolitan decentralization.  One of the earliest streetcar suburbs to St. Louis, it sits directly to the west of the city limits and includes part of Washington University within its municipal boundaries.  Such close proximity to a prestigious university would presumably encourage a desirable housing stock for the academics and staff who work there.  And it has helped University City—part of it, at least.  The southern portion of the city offers high-quality Georgian revival and colonial revival architecture from the 1910s and 1920s along gently hilly streets with a mature tree canopy.  Yet University City has lost one-third of its inhabitants since its peak population of slightly over 50,000 in 1960.  The northern portions of the community, further from the University but closer to some of St. Louis’s most distressed inner-ring suburbs, have a fraction of the income density of southern University City.

Thus we have a fractured community: across its less than 6 square miles are extremes of wealth and poverty, sometimes cheek-by-jowl.  But if a visitor stays south of Delmar Boulevard, he or she would never know that University City is anything but affluent.  Most of the residential streets look like this: 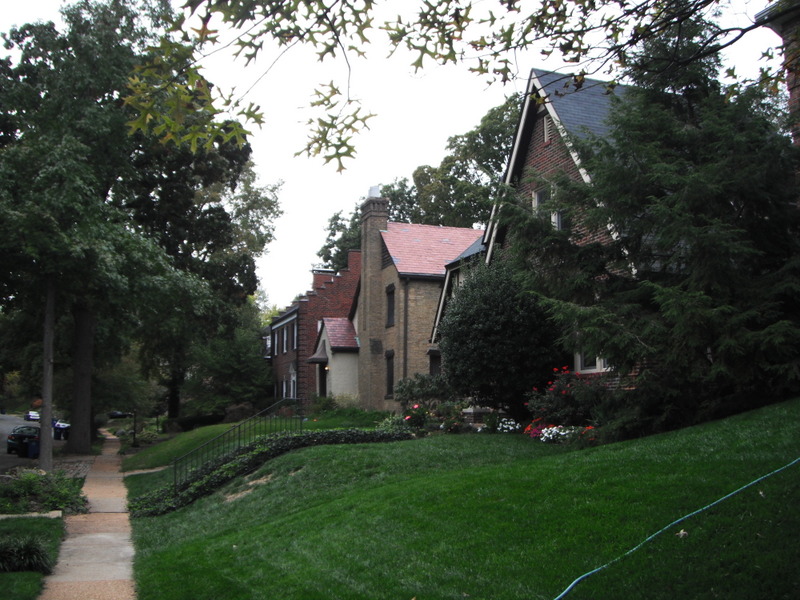 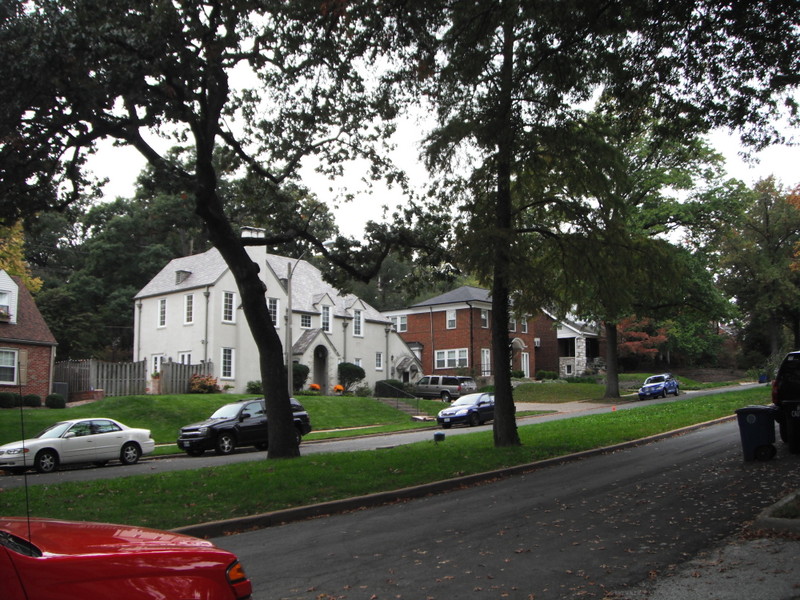 The University City School District has managed to retain a relatively good reputation despite the extremes of incomes it serves, which puts it in a rare minority among metropolitan suburbs.  It’s no Bexley, nor does it rank as highly as top-rated St. Louis suburbs like Ladue, but it certainly hasn’t suffered a collapse of its reputation akin to St. Louis Public Schools.  Thus, the aging but high-quality housing stock in the southern portion of this suburb commands a very high per-square-foot price.  I know this without having to investigate any real estate transactions.  I don’t even need to compare University City home values spatially (to other St. Louis suburbs) or temporally (before and after the real estate bubble burst of 2008-09).  I can tell that this stretch of University City is expensive just by looking at how people treat their houses, and it’s not merely a matter of upkeep or good landscaping.  It’s the subtler details, like this one: 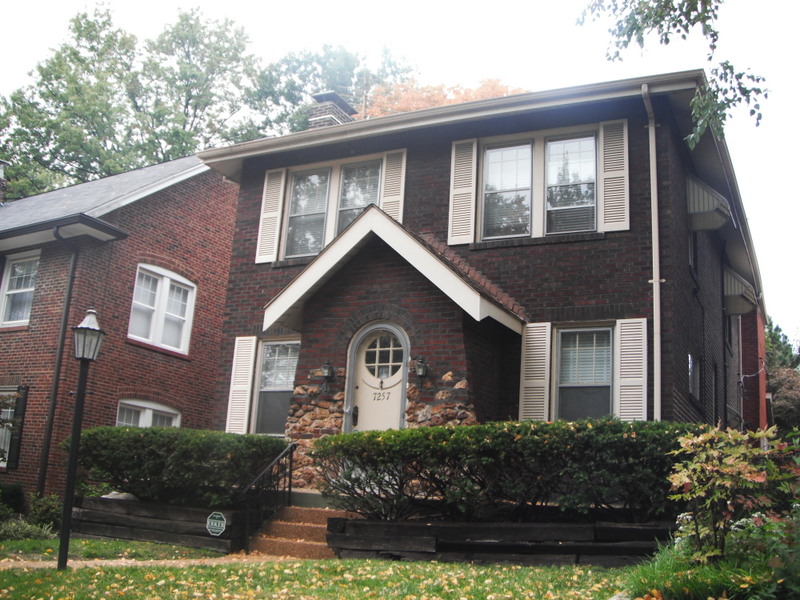 This seems like a pretty conventional house for the neighborhood: all brick, a parcel/lot that is less than a quarter acre, and a garage in the back.  But check the rear end of that house a little further: is it a different color? 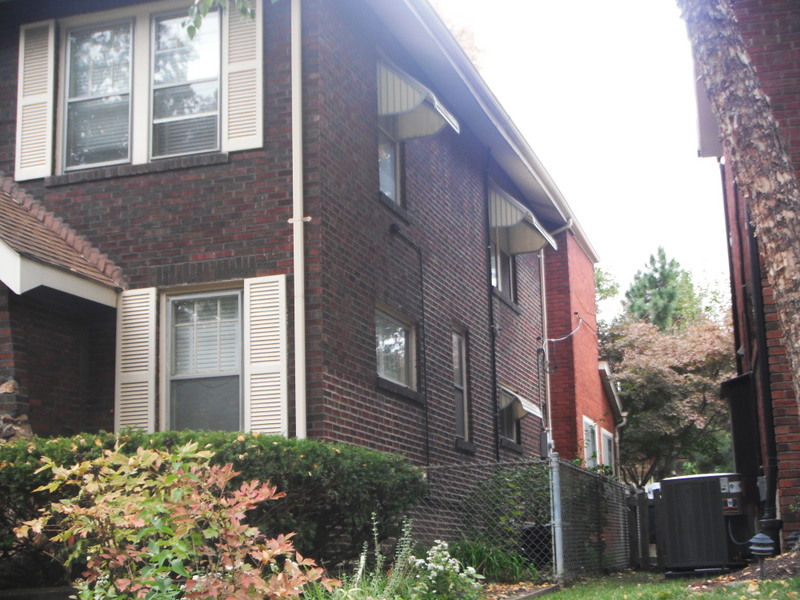 It’s a completely different type of construction.  Perhaps it’s a granny flat; perhaps it’s an addition.  Either way, it’s an increase in the overall square footage of livable space on this small lot.

Older neighborhoods like this, however desirable they may be, typically look somewhat different than they did when they were emergent suburbs.  By 21st century standards, these houses are small for the income level they would hope to attract.  In most regards, the homes in this part of metro St. Louis offer a potent counterpart to the pejoratively labeled McMansions popping up in the distant exurbs.  Both housing types attract households of similar income levels, but clearly those who choose University City value proximity to the city center, businesses within walking distance, and mature trees much more than they need spatial separation from neighbors through large lots—and enormous homes to stretch over those lots.  Some homeowners are no doubt comfortable with the smaller houses here, but the fact that they are made of brick imposes a far greater barrier to expansions or modifications than if they were primarily out of wood.  This homeowner with the obvious expansion clearly weighed the options and decided to sacrifice more of an already tiny back yard to boost the square footage.

Meanwhile, a neighbor just a few houses down on the opposite side of the street has apparently chosen a more radical option: 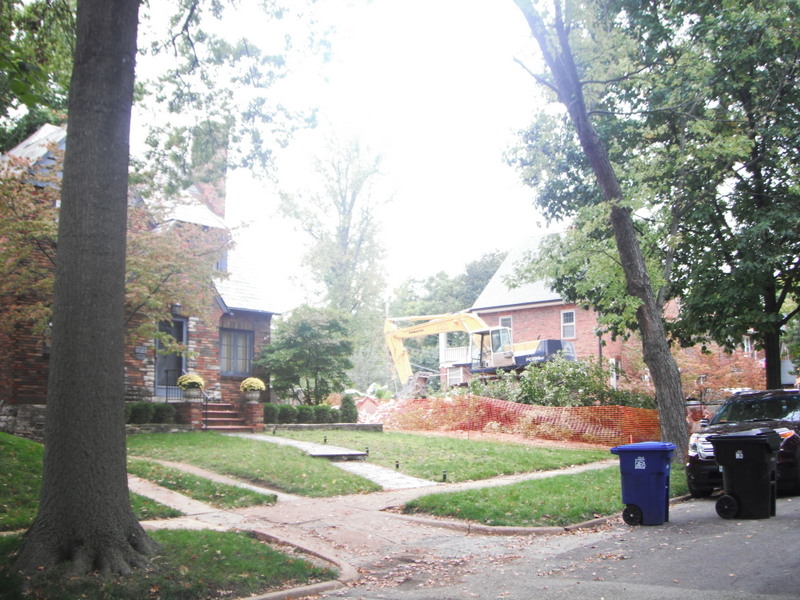 The gap between these two houses—the site of the bulldozer—almost definitely indicates a teardown.  My suspicions are that the house that previously stood here fit the same typology of the 1920s streetcar suburb that all these other homes display.  But it wasn’t good enough for the buyer.  Most likely the new house will be bigger, hugging the lot even more tightly than its predecessor.  Many urban planners call this approach wasteful, since the previous home, whatever condition it might have been in before it faced the dozer, was indubitably built to last the same amount of time as the surviving neighbors.  But, should this in fact be a teardown (and not a home demolished after a major fire or other disaster), this deep-pocketed buyer decided that the desirability of the location in southern University City transcended the shortcomings of the house—but not enough to retain the house itself.  The question becomes what is more wasteful: destruction of a viable house, or the willful bypassing of existing homes to build a much larger house in a greenfield?  Given the options, it’s easy to understand why the term teardown has become a bit of a pejorative.

For many observers, the answer to this question may arrive in a year or two, when this new house will most likely be complete.  Will the teardown blend in with its neighbors, or will it seem oversized?  Chances are strong that the answer will be the latter of the two.  After all, if the previous house simply suffered from outdated engineering systems, a cramped floor plan, or deferred maintenance, it would possibly have been cheaper to address these issues without complete demolition and new construction.  Barring a concentrated effort from the neighborhood association to enforce conformity in the new construction (quite possibly through pursuit of Historic District status), the new house will stand out, either because the construction materials will lack patina, or it will consume more of the lot—and probably both.

Aside from the wastefulness, planners often harshly criticize the trend toward any  teardown because it promotes a jarring non-conformity in comfortable, stable (typically urban) neighborhoods.  I’m not as cynical.  After all, plenty of affluent homeowners are perfectly happy building their 6,000 square foot homes in the exurbs where they can buy a lot more land at a much lower price.  If it weren’t for the teardown opportunity, these homebuyers would simply contribute to further decentralization through a McMansion in the hinterlands.  A teardown typically embodies an uncomfortable collision of taste cultures: the bigger (and newer) is better mentality up against an idyllic domesticity substantiated by conformity toward a shared nostalgia.  A community like University City, fractured through its disinvested north and aristocratic south, needs as much reaffirmation of its “good half” to offset its persistent population loss in the other half.  And, even if this new house looks ridiculous, it won’t be alone: across the street is a neighbor with brown brick in the front and red in the back.

PrevInstalling one life form; inhibiting another.
Massaging the main street.Next

6 thoughts on “Because the rich can afford cosmetic surgery.”