Amidst all the links in the chain, a new shape emerges.

When zipping across a rural landscape on a limited access highway, the visual impact of the interstate exit ramps (and the various goods or services that they access) begin to erode.  To those unfamiliar with the landscape, these exits often all look alike. Even for those motorists who know their precise surroundings, it would be hard to describe these junctions as anything other than monotonous.  But high speeds are only partly to blame for this blur of homogeneity.  Everything looks the same because it largely is the same: gas (BP, Shell), food (McDonald’s, Subway, Burger King) and lodging (Comfort Inn, Days Inn, Hampton Inn).  On a particularly long road trip, one might witness contrasting offerings between mile eight and mile eight hundred, but this is more reflective of regional differences than anything else: the restaurants at the mile eight interstate exit might be indicative of Northeastern tastes, while the restaurants at eight hundred reflect Southern preferences.  Both stretches of the highway nonetheless feature corporate chains, and the widely known national ones like the aforementioned will pervade from coast to coast.  So, even though I’ll confess I had to get off the interstate highway in order to take these photos (and they still didn’t turn out great), the jaunty angles and windshield reflections offer more distinctions to the pictures than the commercial landscape itself. 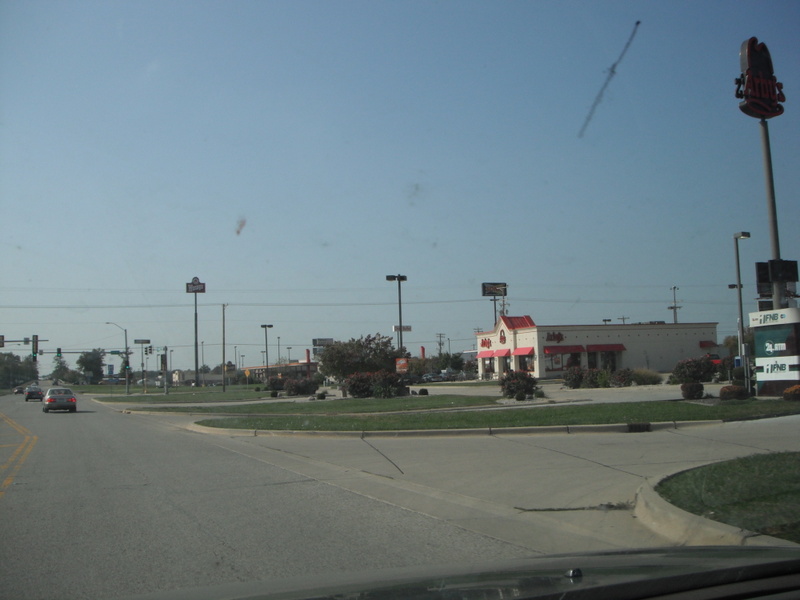 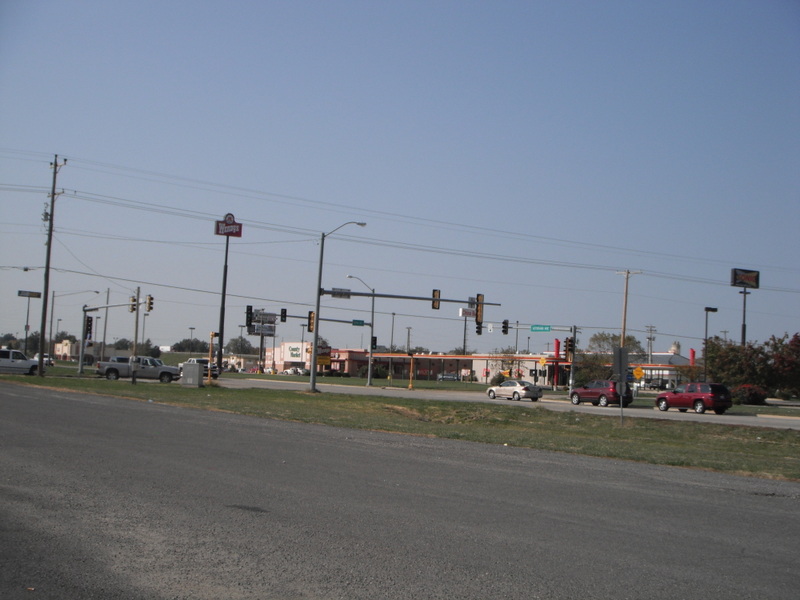 They come from just outside Exit 63 along I-70 near Vandalia, Illinois, but it could easily be anywhere in the Midwest, or elsewhere in the country, for that matter.  Wendy’s.  Sonic.  Arby’s.  Subway.   This Exit 63 may reveal more uniformity than most of the others along this stretch of I-70, in fact.  Vandalia, one of the state’s first capitals, is a reasonably large town of approximately 7,000, and it is situated about midway along the corridor between the outer Illinois suburbs of St. Louis, and Effingham, Illinois—about 35 miles to the west and east, respectively.  Thus, the land around interstate Exit 63 offers an excellent opportunity to host establishments that both the locals and passers-by will patronize.

As is often the case, the presence of national chains here is, in terms of Vandalia’s inventory of taxable properties, a good thing.  While it may nullify much of a sense of the exit ramp’s uniqueness, the presence of so many chains is a sign of prosperity and comparatively high land values.  (As is often the case, the low-rent downtown of Vandalia is almost completely dominated by local establishments…when a building isn’t completely vacant.) Compare the photos above with the Exit 52 along I-70, at the town of Mulberry Grove.  Google Streetview reveals the Mulberry Grove ramps on both the south and the north sides of the interstate offer little to nothing in terms of goods or services; the town of less than 750 people simply isn’t big enough to justify a truck stop or hotel, especially when Vandalia’s busy exit is just 10 miles further down the road.  If anything, a minor interstate exit like the one at Mulberry Grove is more likely to host locally owned establishments, since the county road that links I-70 to the town gets significantly lower traffic volumes, resulting in cheaper land that equity-poor entrepreneurs can afford.  Conversely, the higher costs at the Vandalia exit have pushed away almost all proprietors except for the ones with deep pockets, which usually translate to landscape of franchises from regionally or nationally recognized chains.

At the same time that Vandalia’s higher income density encourages a greater agglomeration of commerce in general, it poses greater challenges for individual establishments.  How do the owners at these hotels, restaurants, and gas stations distinguish themselves from the same establishments just 10 or 15 miles further down the interstate?  Clearly one proprietor found a way. 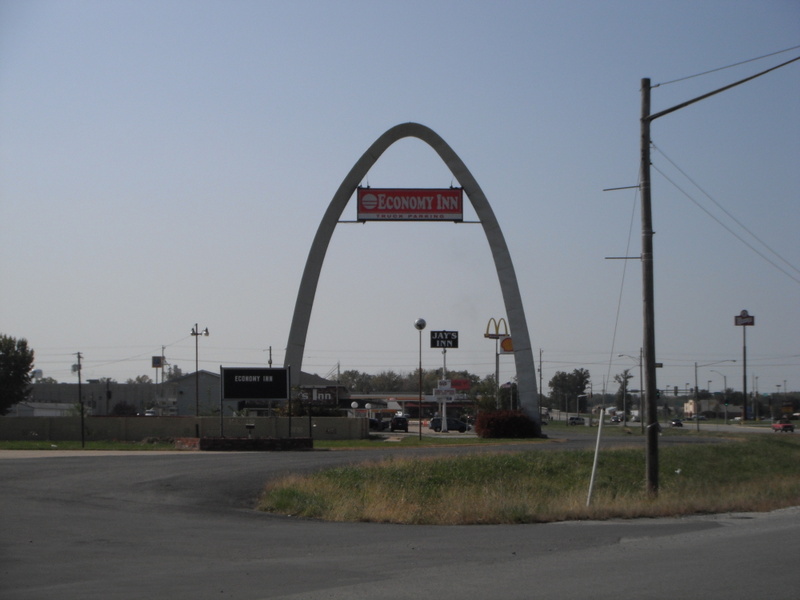 On a highway lacking any other distinctive visual stimuli, this stands out like a beacon: a hotel tipping its hat to the Gateway Arch, St. Louis’ signature monument, which the typical motorist traveling westward on I-70 would confront head-on just 70 miles further.  Obviously this replica pales in comparison to the real McCoy, but it certainly stands out in comparison to anything else along the highway.  Despite its blurriness, the photograph below, from the opposite angle, also reveals how well the signage for the Economy Inn holds up against its neighbor: 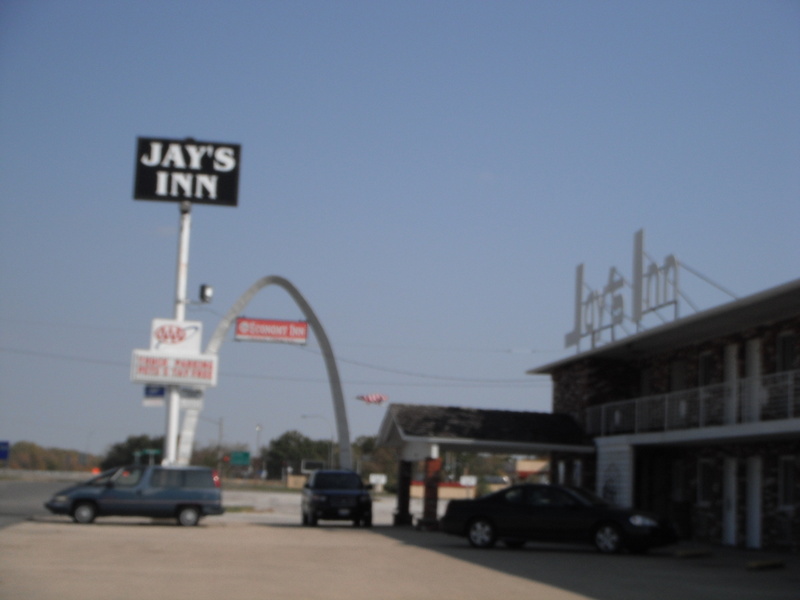 The conventional plyon sign used throughout suburban America simply doesn’t stand tall enough to motorists traveling at 70 miles per hour; by the time they would see it, it would be too late to pull over on the exit ramp, so they would simply continue 15 miles to the next interstate exit that offers virtually identically services.  Thus, the high-rise sign is ubiquitous along rural instates precisely because it lingers in the horizon for several minutes before drivers encounter the business directly.  The stanchions hoisting the signs along I-70 in Vandalia are several times taller than the Arby’s, Sonic, or Wendy’s buildings themselves.  But as prominent as they may seem, the sheer redundancy of high-rise signs every few miles has diluted their efficacy.

The Economy Inn’s promotional tactic is simple, humorless and not particularly audacious.  But the sign serves as a cheeky overture to the skyline that westbound travelers will likely confront about 40 minutes later.  It owes its communicative strength to its referential source: Eero Saarinen and Hannskarl Bandel’s masterpiece.  Quietly approaching its 50th birthday, the Gateway Arch has proven such an effective landmark that it routinely thrusts this medium-sized city into the Top 10 or even Top 5 most recognizable skylines on opinion polls.  Roadside America derives much of its appeal from iteration—reference loops that provide a certain level of hype as the travelers approach the antecedent.  Since so much of the landscape is built on repetition anyway—those same overpasses, green-and-white informational signs, Wendy’s, McDonald’s, Holiday Inn—the deviant attraction stands out like a shofar played during a string quartet.  Regardless of the quality of rooms at this budget hotel (TripAdvisor isn’t exactly complimentary), I bet the Economy Inn boasts a higher nightly occupancy and a higher assessed value than most of its neighbors, all thanks to this unconventional little sign.  It catches the eye.  The real question is whether the sign was born during humbler times, when only a few services stood at the Vandalia exit ramp, land prices were lower, and local establishments still had a toehold.  Maybe some mom-and-pop proprietors originally built it to stand out from the competition.  And—better yet, since it apparently was a Travelodge Vandalia until recently—maybe the Economy Inn is a local operation interspersed with all the national chains, hanging on amidst fierce competition thanks to its visually distinct method of self-promotion.

2 thoughts on “Amidst all the links in the chain, a new shape emerges.”