I hate to write on the same topic for two consecutive blog posts, and I have covered plenty of ground with retail in the past, including the often-maligned strip mall.  But this photo opportunity was too good to pass up, and it the construction in progress probably won’t look like this for much longer.  From time to time, I get to see how the landscape has changed when I return to the south side of Indianapolis where I grew up.  And I’ve featured material on the environment around the prosperous Greenwood Park Mall back when this blog was but an infant (or a toddler, at least).  So now it’s time to scrutinize Greenwood Shoppes down the street.

The Greenwood Shoppes strip mall in the photo below sits directly to the west of the Greenwood Park Mall, just across busy U.S. 31.  My apologies for the duskiness of the photos, but it should still be obvious that it is undergoing a sort of renovation. 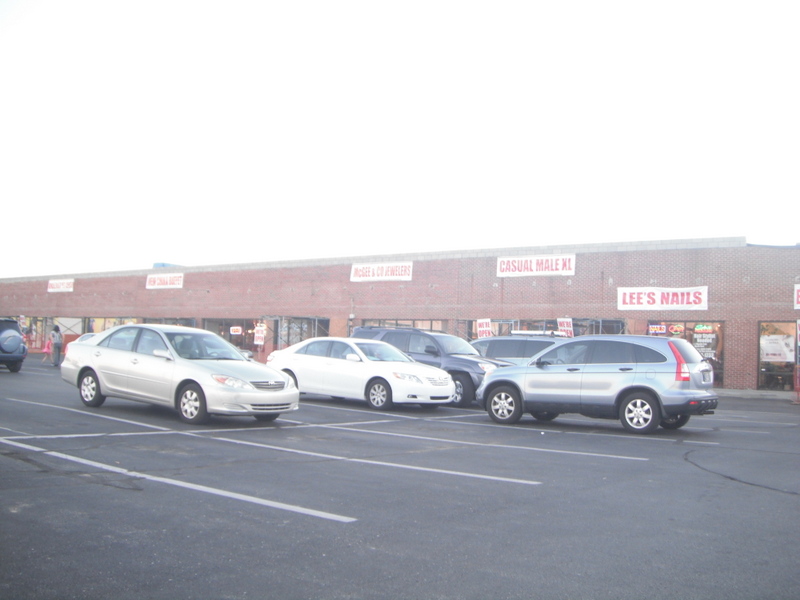 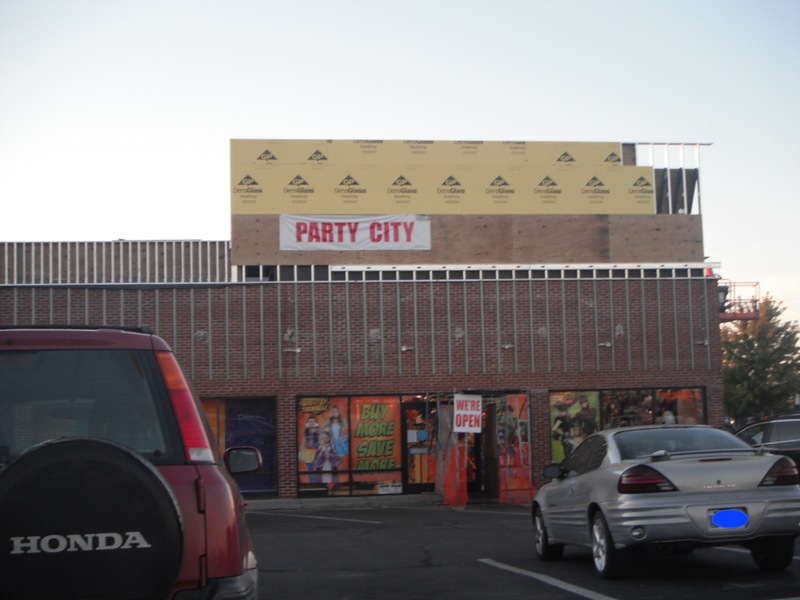 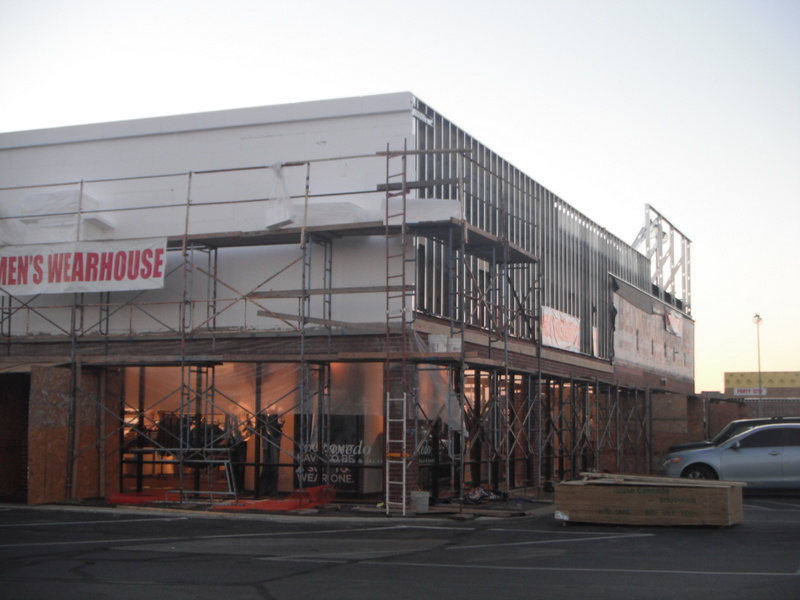 Any strip mall that receives an extensive facelift such as this has clearly struck a grand slam, as suburban retail goes.  A huge number of strip malls—I suspect more than half—never benefit from any cosmetic changes: their tenants downgrade as they age, until they can’t lease their space at all, and then they retreat further, from neglect to complete abandonment.  They become so obsolete that an investor won’t touch them, possibly because the surrounding neighborhood has declined economically, but more likely simply because there are just so many fresher, newer strip malls that have risen out of pasture land in the ensuing years; the one that is already a generation old no longer offers just the right location, the right traffic patterns, or the perfect building design.  We’ve all seen them before.  A strip that remains successful for 20 years is an anomaly.  Many don’t survive even that long, as proven by a completely vacant one in the otherwise healthy suburb of Plainfield that I wrote about a few years ago.  The array of dying strip malls that dot the landscape of Houma (also hardly a struggling city), featured last week, are not likely to be much older.  An anucleate metropolitan settlement pattern exacerbates the short life cycles of strip malls, but here in Greenwood Shoppes we have an unusual exception. 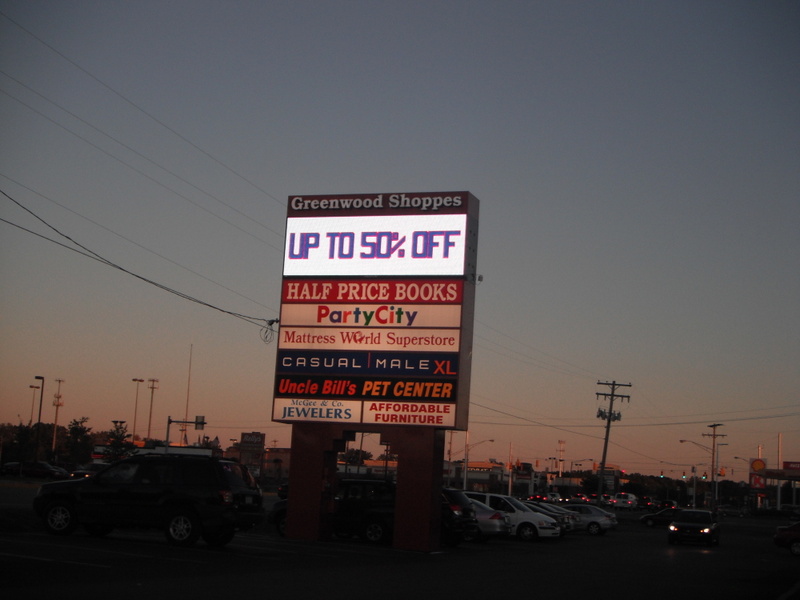 It’s not particularly remarkable in any other way: the tenants are hardly high-end.  But they range from national chains like Half Price Books and Men’s Wearhouse, which have been at the location at least a decade (possibly two), to local institutions like McGee Jewelers.  During my periodic visits to Greenwood over a handful of years, this strip mall has never been less than 90% occupied.  Thus, the property owner is confident in the shopping center’s continued viability to invest some money for a facelift.  One section of the strip mall is farther along in the process. 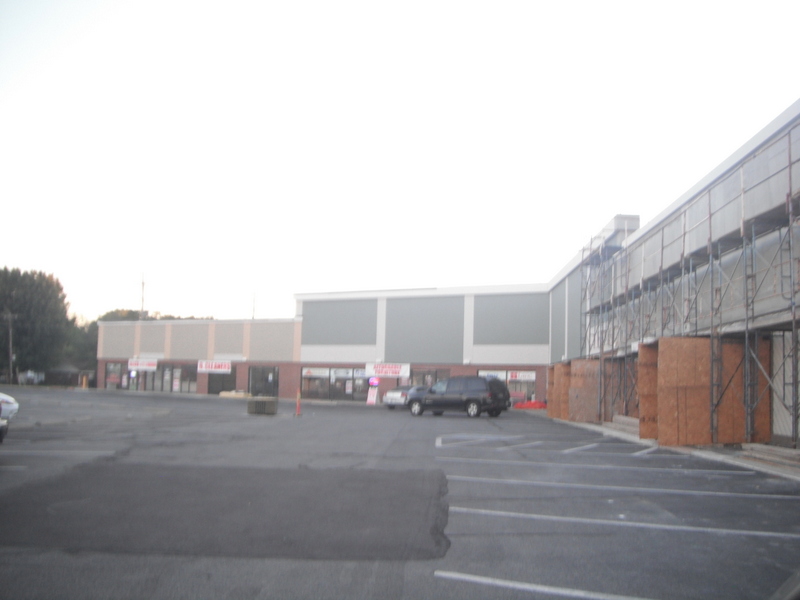 It doesn’t look like the changes are going to be that dramatic.  No improvements to landscaping in the parking lot that I can tell, and clearly no fundamental changes in the massing or floorplate.  The businesses can continue operating—nothing more than a skimming.  But stripping away the shell used to mount the illuminated signs revealed a surprisingly rich history to this strip mall. 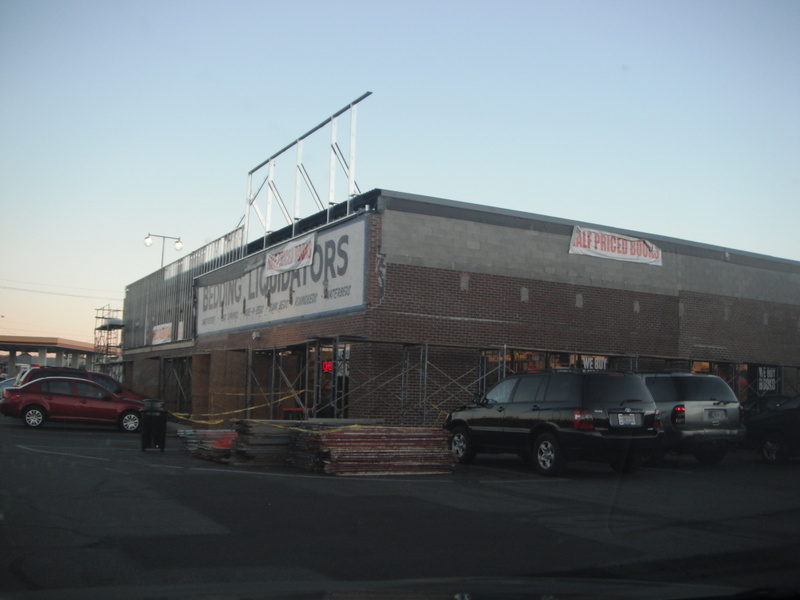 The current tenant is Half Priced Books, but a sign painted on the brick says “Bedding Liquidators”.  The bedding tenant obviously predates the used bookstore, but how old is it?  I have no memory of this location hosting anything but a Half Priced Books, but that doesn’t mean much.  More telling is the fact that the store used a painted sign to identify itself.  Virtually no strip malls use this technique anymore.  If we witness illuminated signs these days, they usually involve floodlights mounted below, shining directly onto a wooden sign—not one painted directly on the side of the brick.  This old sign cannot help but evoke the faded old five-and-dime advertisements painted on the side of commercial buildings in a more urban area—only this one, after being concealed for two or possibly three full decades, is in superior shape. 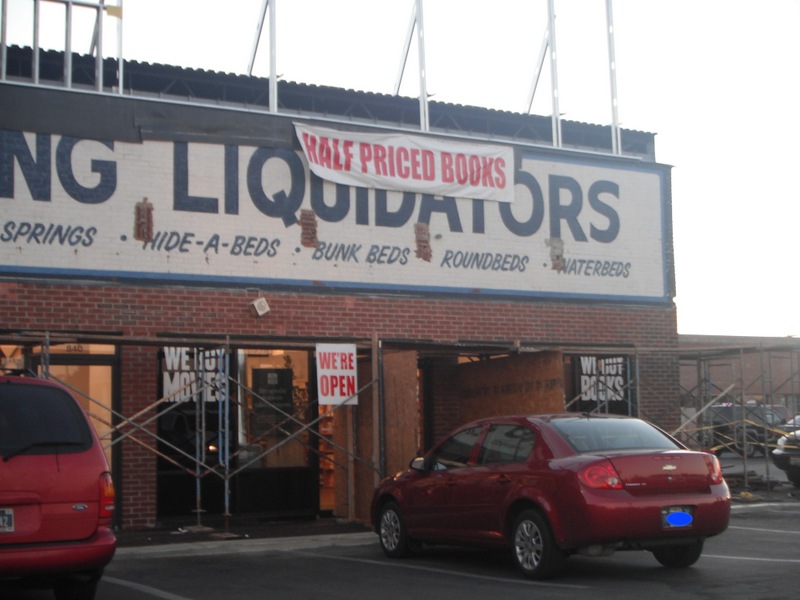 In a matter of days, the construction team will probably slap up a new wall to hide this old painted sign, and in a few weeks the renovations will be complete.  The tenants will remain, confident that they claim one of the best locations within this large regional shopping hub, and they’re probably right: visitors can look out at the Greenwood Park Mall from inside just about any storefront. 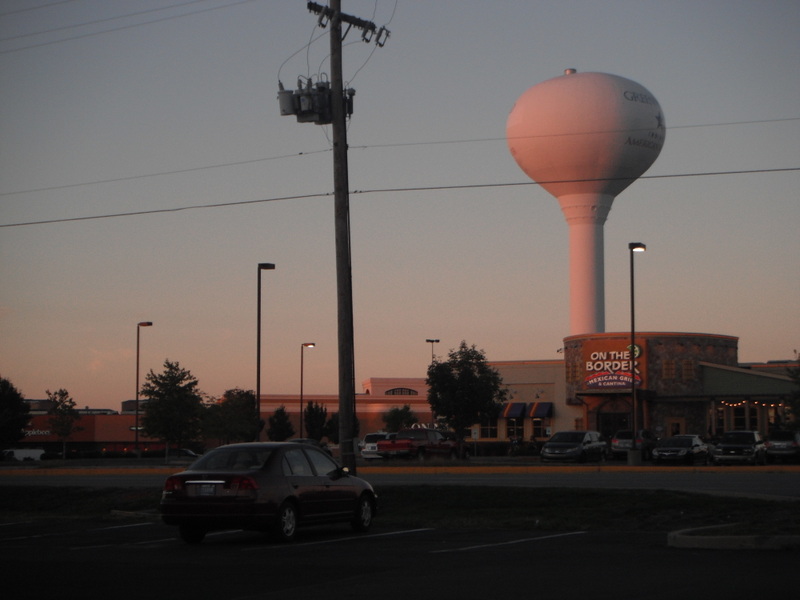 The plastic surgery performed on Greenwood Shoppes only seems to emphasize how much this particular strip mall defies the standards—even within the Greenwood Park Mall area.  While the mall itself is healthy, the strip malls surrounding it in all directions are a very mixed bag.  Just to the north, on the other side of County Line Road (and therefore in the Indianapolis City Limits), sits the much larger County Line Mall that hosted a Target in decades prior.  Since the Target sought a new location about ten years ago, the County Line Mall has struggled with an occupancy rate from around 50 to 70%, even after it received a major facelift of its own.  Meanwhile, directly to the east of the mall, across from it on Madison Avenue, sits a strip mall similar in scale to the Greenwood Shoppes, but its fortunes have taken a different turn: 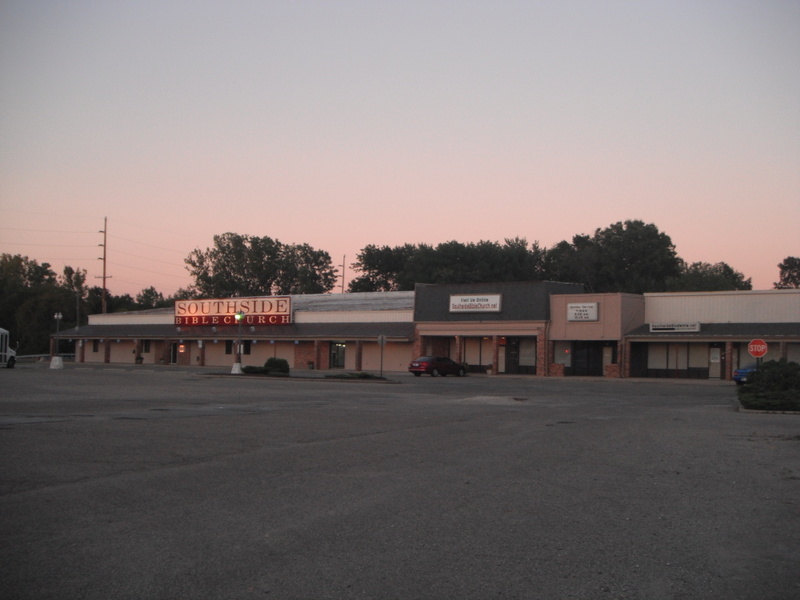 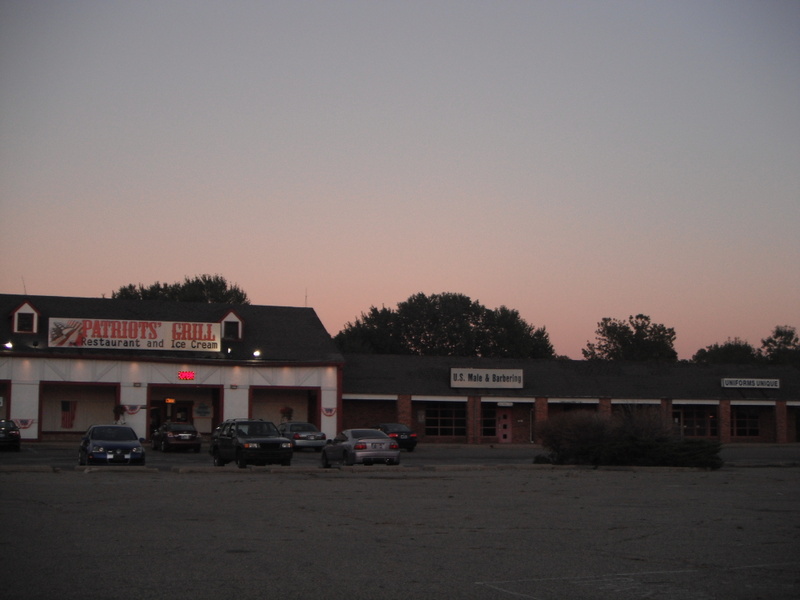 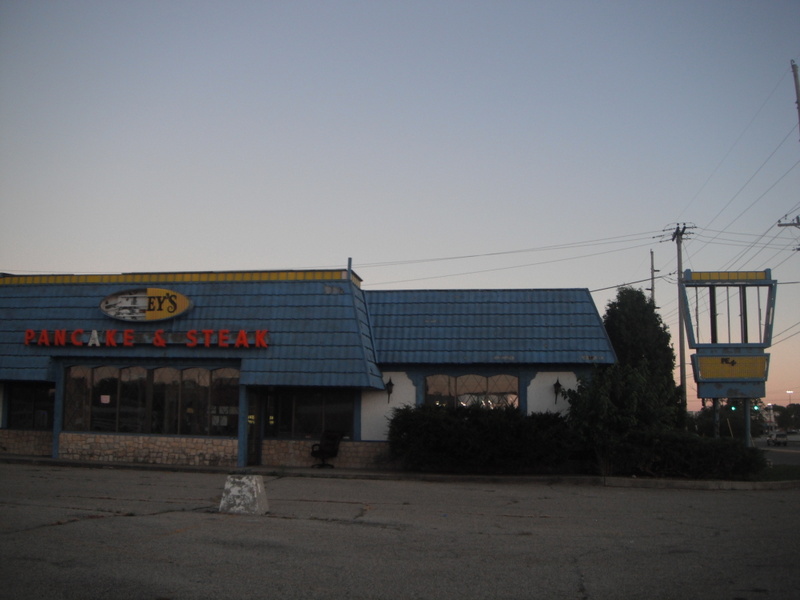 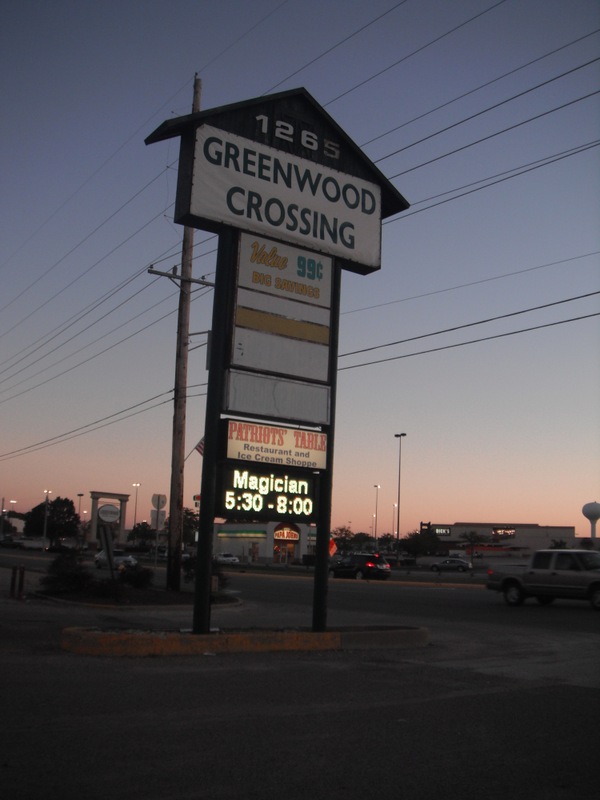 Though Greenwood Crossing isn’t completely vacant, the pockmarked parking lot and faded signs demonstrate that it isn’t a top draw.  It even hosts a church, which is usually a sign of a strip mall that is desperate to recruit tenants.   But it is the exact same distance from the Mall as the Greenwood Shoppes, as evidenced from the final of these photos, in which the water tower and Dick’s Sporting Goods are visible at the horizon to the right.  Although a major arterial, Madison Avenue just doesn’t quite command the traffic volume that U.S. 31 does.

Greenwood Park Mall and the adjacent Greenwood Shoppes demonstrate little more than the oft-proven notion that retail developers are at the mercy of their tenants.  Suburban retail, generally lacking a great deal of design innovation, rarely gives its developers more than it can expect: a conservative, adequate ROI over a pathetically short life cycle.  Then it rots, leaving its residential neighbors to complain to the City to intervene on the blighted appearance.  Every developer thus weighs the odds that its own product will be an exception to this rule, generating revenue for multiple generations.  But the odds are slim enough that the process of converting greenfields to strip malls has become a race to the economic bottom: low returns incentivize builders to skimp on hard costs in order to maximize revenue across a forecasted slim profit margin, while the persistently low budgets for these shopping centers almost insures that they will look deteriorated and old-fashioned once enough cheap new developments two miles have away have displaced it from its hierarchy.

The same could happen here, and Greenwood Shoppes could easily tank—the income levels of the housing directly surrounding it (mostly aging apartments) are significantly lower than the norm for both Greenwood and the south side of Indianapolis.  It could also fail to the newer, much ritzier shopping plaza/strip mall directly to the southeast, on the opposite side of Fry Road.  But both retail typologies (the enclosed mall and the strip center) have endured through a first and now a second renovation, and, baring a major change in the economic base of this part of town, they are likely to remain in this condition for years to come…at least until the next facelift buries another generation of outmoded signage or architectural details.

PrevBig boxes: keeping all the ducks in a row.
MONTAGE: Connecting the dots with used car lots.Next