Inevitably, communities evolve to reflect the personalities of their inhabitants.  Such an assertion may come across as glib, and it probably is, but it’s far better than the opposite—when a character of its community seems at odds with its constituents’ goals.  A fundamental goal of an effective representative democracy is that local governments allow people to articulate what they want out of their communities.  Obviously the ethics behind this practice can come into question, such as when a town like Mt. Laurel, NJ essentially restricted the construction of housing that would accommodate families below a certain desirable income level, or when several entire states levied poll taxes with the de facto goal of disenfranchising an entire subset of the population which generally lacked financial wherewithal and was overwhelmingly African American heritage.  But these dramatic negative examples are the exception to that lazily flowing stream of the provision of local government services.  Most of a town’s personality manifests itself in the most mundane of ways.

Nonetheless, two municipalities will usually reveal a few distinctions in how they choose to fund infrastructure, even if it comes down to inconsequential differences in design.  The obvious best way to witness these differences is to stand along a border such as this one in the suburbs of Cleveland: 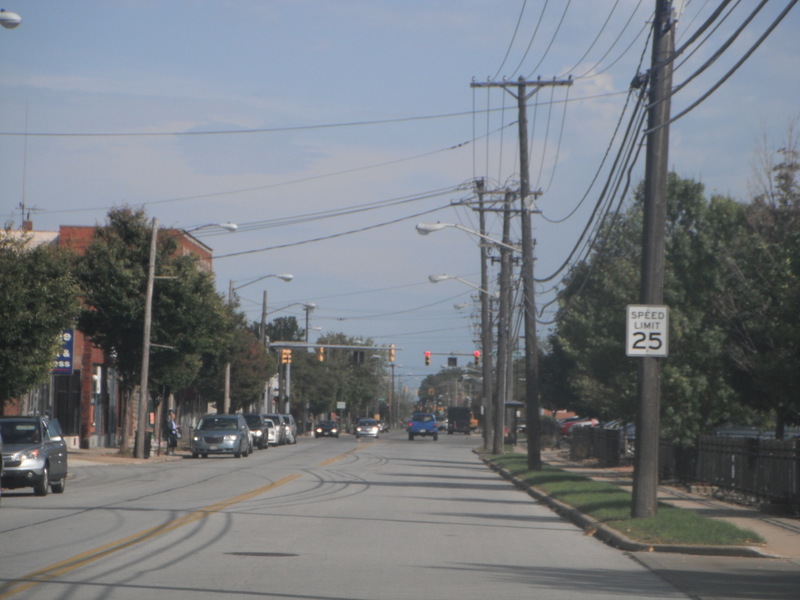 For about six blocks, South Taylor Road forms the boundary between Cleveland Heights and University Heights, two older, racially integrated, mostly affluent inner-ring suburbs on the eastern side of Ohio’s largest metropolis.  As is often the case, the municipal boundary rests on the crown of the road, so that, from this angle looking northward, the left-hand side is Cleveland Heights and the right-hand side is University Heights.

The differences are often subtle—nothing here as obvious as contrasting paving surfaces for the two sides of the road.  But the cities’ public works departments clearly pull from different catalogs when purchasing some of their basic streetscape elements.  Notice the road sign on the right-hand side of the street: 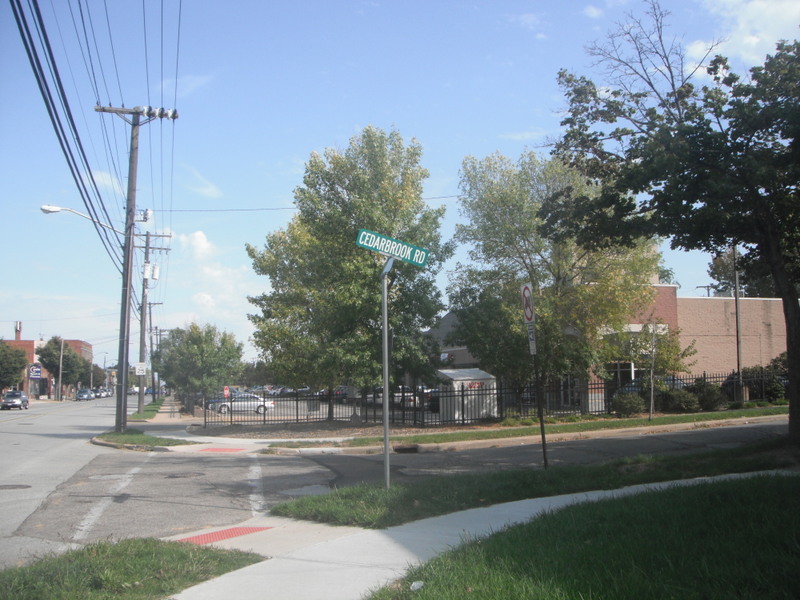 And then across the street, on the Cleveland Heights side of South Taylor Road: 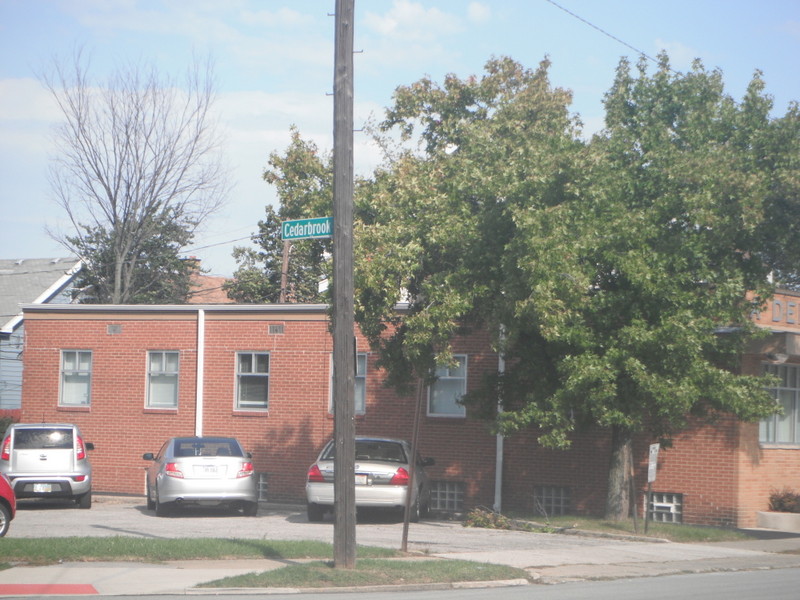 The “Cedarbrook” is no longer in all caps and it is missing the “Road” suffix.  Another visible contrast is in the style of the streetlights.  On the University Heights side of the street, the mast that projects the light further into the street is thicker and looks to be of a similar metal as the sheath that encloses the bulb: 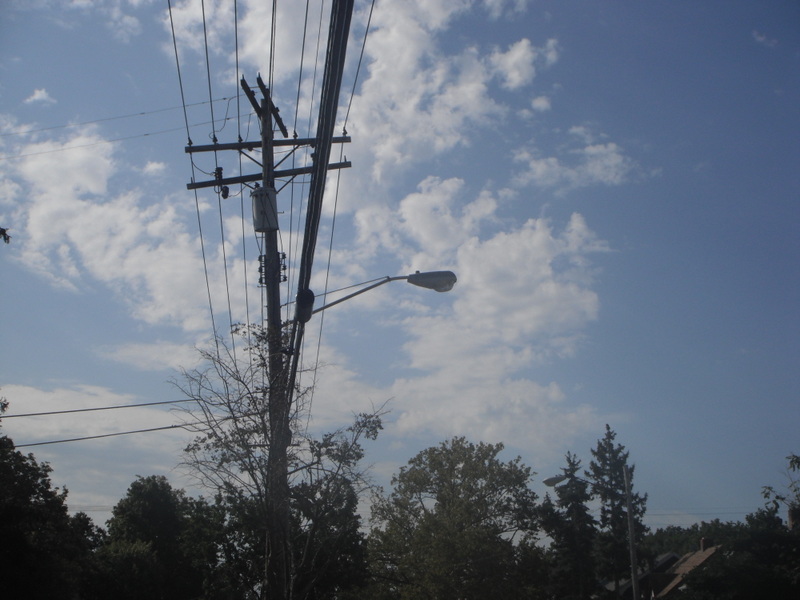 By contrast, on the Cleveland Heights side of the road, the mast is of an apparently different material that is thinner and with a narrower diameter, and it appears to be fairly rusted: 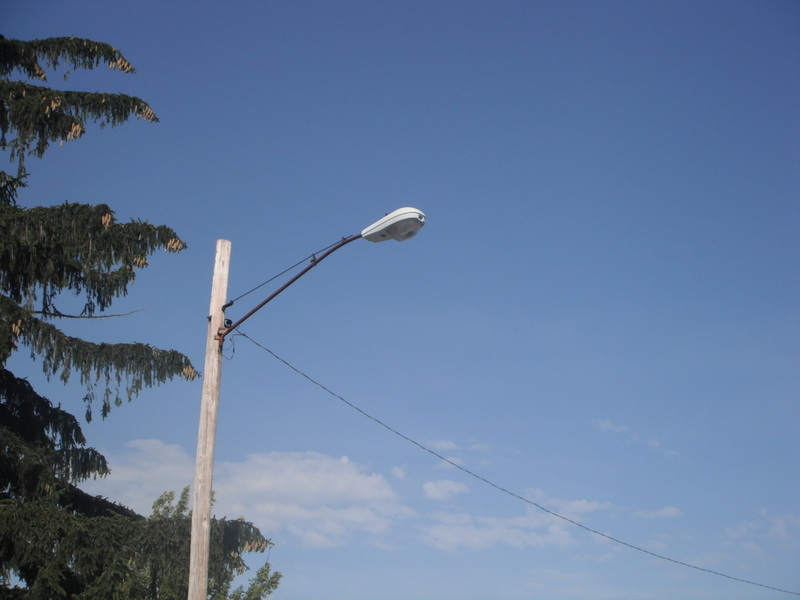 Obviously these distinctions demand a keen eye, and by most considerations they hardly matter. But review that first photo of both sides of the street yet again, and now the differences between the streetlights should pop out.

Municipalities enjoy a wide berth in the array of designs they are able to employ for a number of roadside features, particularly those for which a motorist’s ability to see is important but not essential.  Streetlights can obviously assume a variety of configurations, and signs indicating the name of local roads are a common method of municipal branding—most communities consciously seek out different road name signs to distinguish themselves from their neighbors.  Given the options available, the differences between Cleveland Heights and University Heights are relatively modest.  I’m surprised they don’t even use different colors. 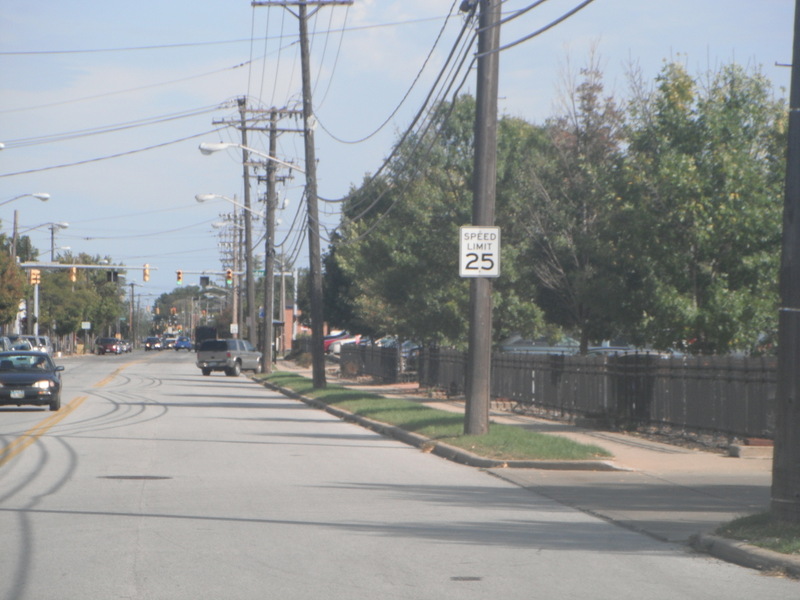 The safety of roadways depends on a clearly recognizable indicator of the maximum (and sometimes minimum) allowable speeds.  During the first half of the 20thcentury, speed limit signs assumed a variety of guises (some of them particularly wordy) to the point many drivers ignored them.  The release of the Manual on Uniform Traffic Control Devices (MUTCD) in 1948 by the Federal Highway Administration (FHWA) set a standard of black lettering on a white shield, looking like the one on the University Heights side of South Taylor Road, seen in the above photo.  This design has remained more or less unchanged ever since, despite many new editions and updates to the MUTCD.  We’ve all seen exceptions, most likely in the grassy median of a subdivision or the entrance into an affluent community.  But these customized speed limit signs nearly always apply on local roads—not important collector streets like South Taylor.

Despite a federal mandate for uniformity in the appearance of speed limit signs, municipalities are generally left to their own devices when it comes to traffic control.  In the case of these two Cleveland suburbs, one of the key regulations seems to place them at odds with on another.  The photo above, with the speed limit of 25, looks northward on South Taylor Road, viewing the regulation from the University Heights side.  When I pivoted 180 degrees, looking southward, this is what I see at the exact same location on the Cleveland Heights side of the road: 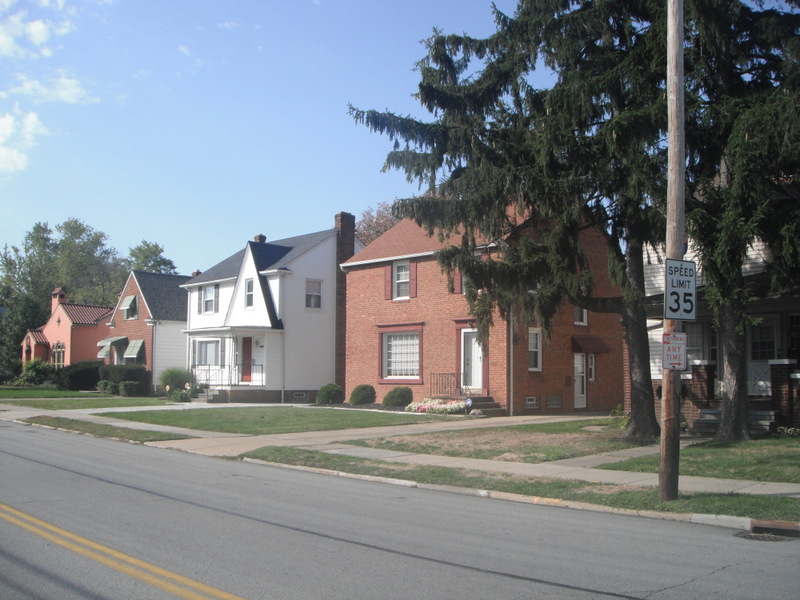 Depending on the side of the street one is traveling, the speed limit is different.  Northbound traffic in University Heights must travel 10 mph slower than southbound traffic in Cleveland Heights.  Whether intentional or not, such a regulation could easily serve as an embedded speed trap, much to the frustration of passers-by who, not knowing the idiosyncrasies of individual suburbs, would probably never expect such a thing.  Obviously all it takes is reading the signs as they pertain to the respective direction of travel, so a motorist would be hard-pressed to make a convincing claim of entrapment.  Perhaps University Heights, with John Carroll University at its hub, has recognized the need for lower speeds to protect the safety of a heavy pedestrianized student population.  Or maybe the city is deliberately trying to moderate the notoriously speedy younger drivers.  After all, Cleveland Heights is an equally pedestrian friendly suburb.  I’m sure other neighboring communities have attempted similarly eccentric methods of enhancing the distinctions of the regulatory environment between them; the results aren’t always as innocuous as a specialty vintage road sign.

4 thoughts on “One road—two bodies politic.”