Big boxes: keeping all the ducks in a row.

I have chronicled the tireless migration of retail across metropolitan landscapes several times in the past; it formed the central topic of one of my earliest blog posts.  Unfortunately, most of my posts have focused on the blight left by outdated retail typologies: the dead malls, exsanguinated big boxes, pockmarked parking lots, blighted strip malls, or (at the very best) the once widely coveted destinations that are now dominated by check cashing centers and pawn shops.  I’m not trying to dwell on the negative, but the fact remains that focusing on the less prosperous retail centers helps to substantiate an already manifest assertion: retail in the US is more or less always soft.  The supply of new retail options always far exceeds the demand; some have even argued that developers’ ambitions to construct retail has become completely untethered from consumer demand, to the point that they are no longer related.  Retail locates where the investors see fit, and those investors can range from experienced developers to an elderly couple hoping to build a strip mall to provide a nest egg for the grandkids.  And sometimes the elderly couple shows better foresight than the corporate developer.

Thanks to the almost exponential proliferation of shopping centers over the last half century, the rules for straight-line depreciation of a retail outlet tend to employ estimations of about 15 years, meaning that the average commercial plaza will need a thorough renovation in that time frame if it is to retain a lucrative market.  In fast-growing metropolitan areas, that time interval could even be smaller.  But suburban growth patterns, where decentralization is the primary force acting upon new settlements, are fairly predictable in nature: an auto-oriented shopping plaza that still lures top-dollar tenants after 40 years is the exception, not the norm.  I have covered the topic of metropolitan retail periodically over the years, and at the moment I’m not sure I have anything new to offer.

But smaller communities are another story altogether.  Many of them are static in population; quite a few are shrinking.  Presumably their retail landscapes would echo these patterns by demonstrating very little change, right?  An evaluation of the small Louisiana city of Houma (50 miles to the southwest of New Orleans) would suggest that this is not the case.  The region itself is not particularly depressed; consistent growth in the fishing and petrochemical industries kept the unemployment rate among the nation’s lowest in the spring of 2009, during the peak of the Great Recession.  Its unemployment has inched up to above 5.0% since then, but it still remains well below both the state and national rate.   Its relatively vigorous economy, however, is exerting only a modest impact on population change. Houma itself grew 4.1% from between the 2000 and 2010 Census, and the surrounding parish of Terrebonne grew 7.04%—not bad, considering Houma suffered through four hurricanes in the last decade, and even better considering Louisiana’s anemic population growth of 1.4% over this time frame.  But these figures hardly indicate an oil boomtown comparable to the many that have sprouted like mushrooms in Texas, or the more recent equivalents in Williston, ND and Gillette, WY.

Despite relatively modest growth, the retail developments have relentlessly shifted away from Houma’s town center.  This pattern isn’t merely referring to the hegira of downtown businesses to auto-oriented shopping centers—that obviously happened decades ago.  The latest phase shows a move from those neighborhood strip malls to a marginally different automobile oriented typology.  The side of Houma west of the Intercoastal Waterway that bisects the city is both higher income and more heavily populated.  Nonetheless, most of the shopping centers that hug the main street look a bit like this: 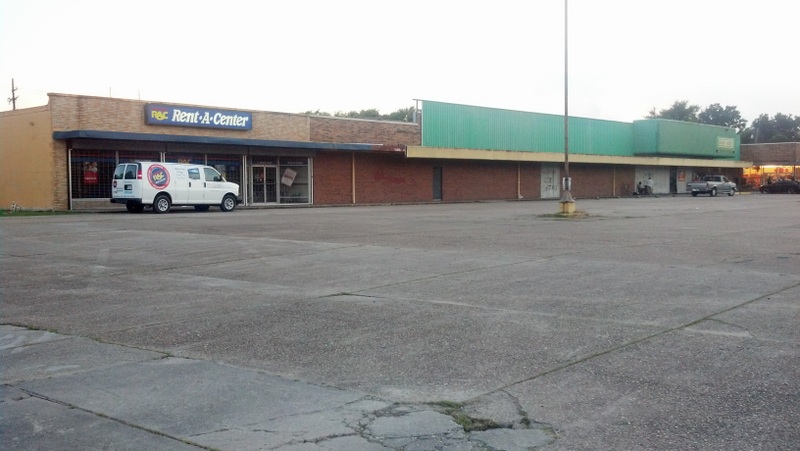 Granted, this isn’t an altogether fair example, since this tired old shopping center sits just a half-mile west of downtown Houma, in what is visibly the lowest income part of town.  But a mile further down State Road 24 is wealthier, and the strip malls or their big boxes still look the same. 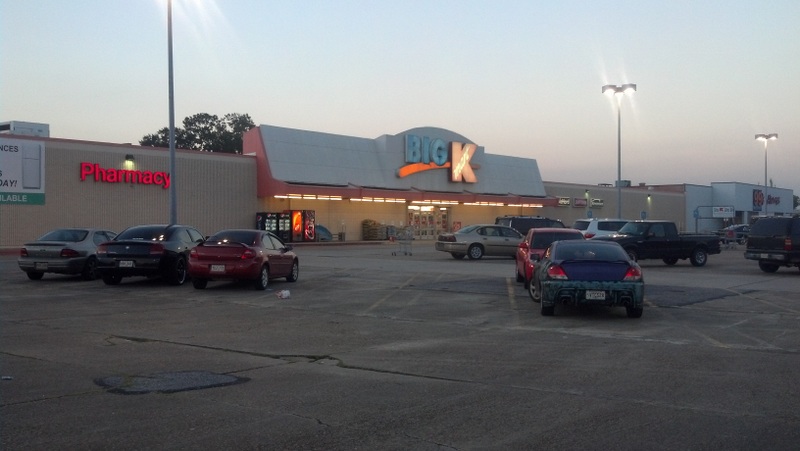 The hobbled giant K-Mart has been in decline for decades now, to the point that surviving branches only occupy that faded strip malls that Wal-Mart would have jettisoned from its portfolio long ago.  (I blogged about this trend in K-Mart a few years ago.)  The only other major retail neighbor to K-Mart? 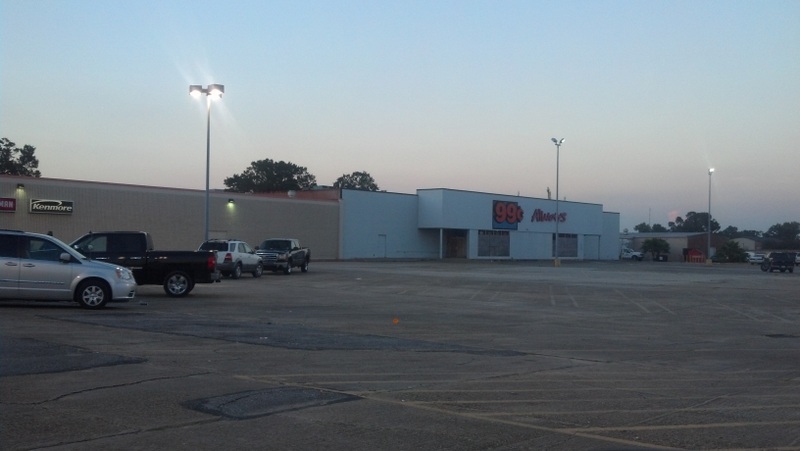 Continuing further down State Road 24, the subdivisions are conspicuously middle class, but tenants suggest low leasing rates in all the strip malls.  The Southland Mall is hanging on and still boasts some major chains like American Eagle and Bath and Body Works, but it’s not exactly thriving: 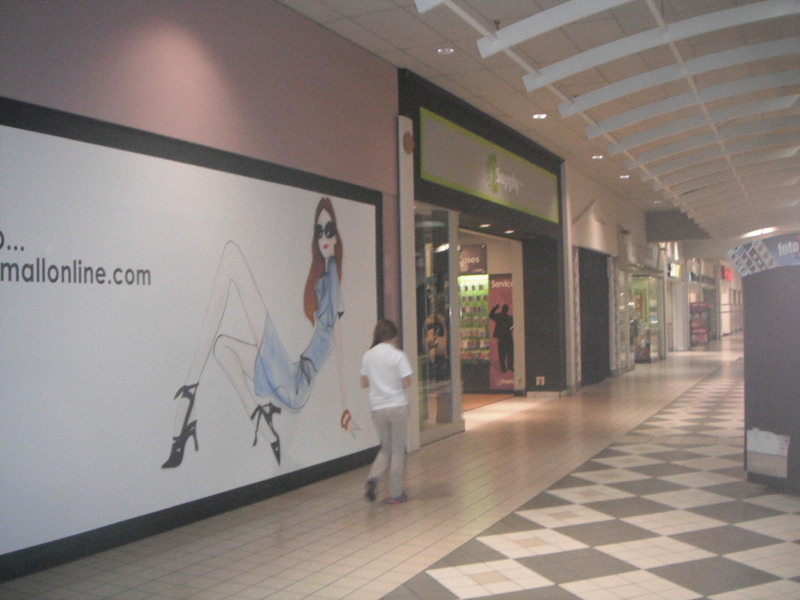 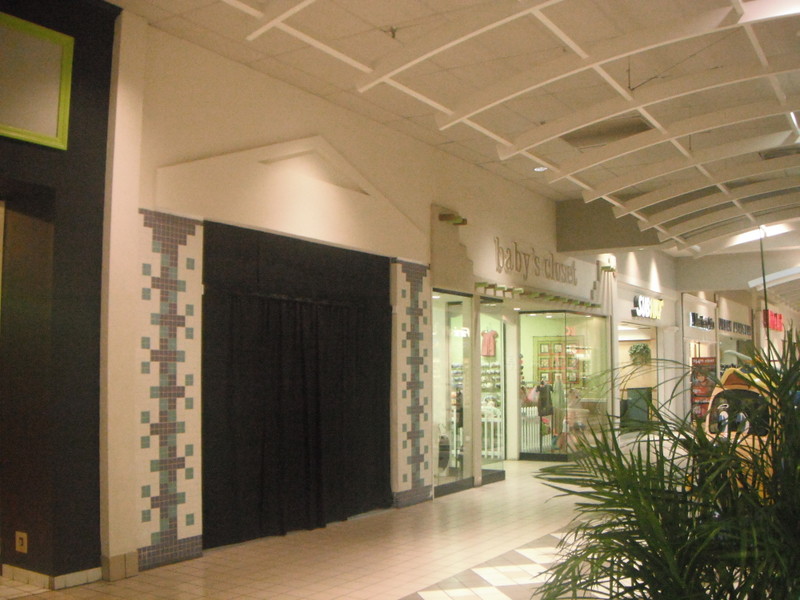 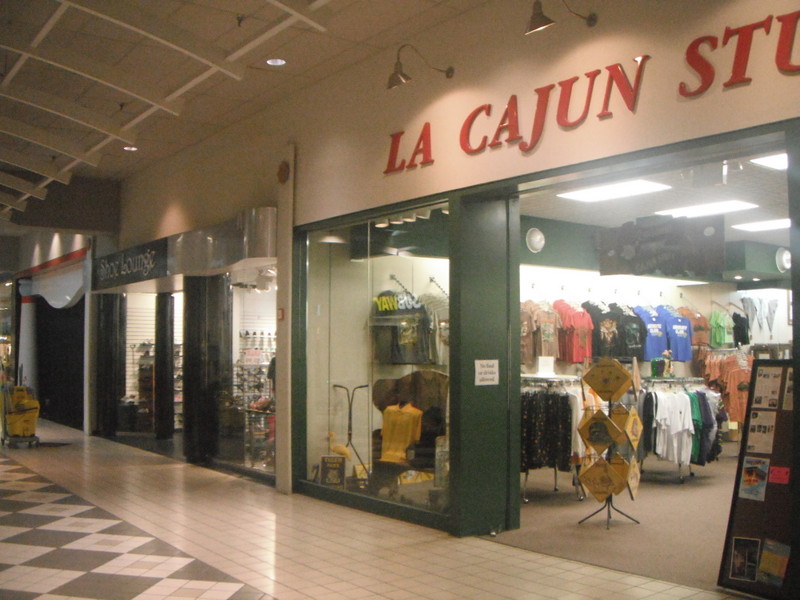 From my observations during an August visit, the mall is barely 60% occupied, with particularly high vacancy levels in the wing adjacent to the long-atrophied department store Sears (a frequent occurrence in malls with Sears that I blogged about earlier).   Many of the other remaining tenants are mom-and-pop stores; nothing wrong with this in theory but clearly an indicator that the mall isn’t commanding high rents.  The outside strip mall across the street looks better from a superficial visit; at least it’s heavily occupied. 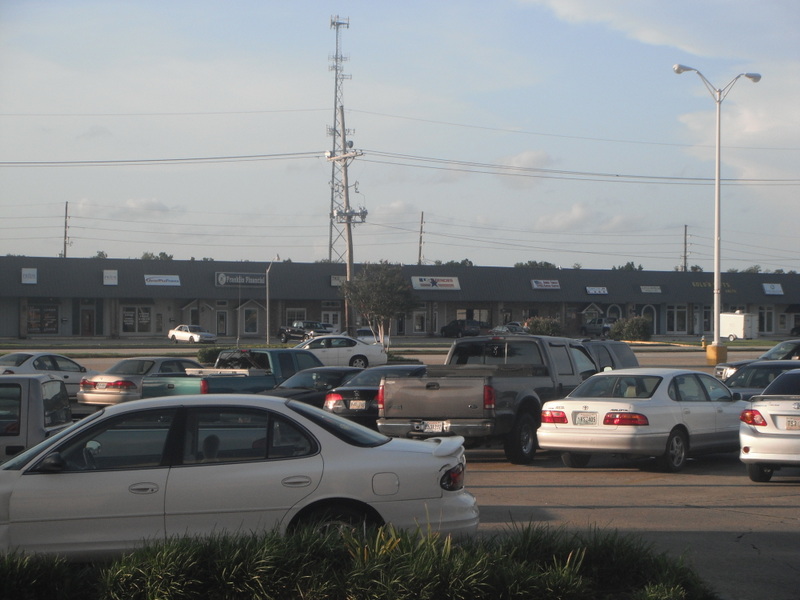 But the tenant mix is hardly lucrative: temp agency, tax filing, gold/silver exchange, and not one but two Armed Forces Career Centers.  (Both are in operation.)  I have no objections to any of these tenants, but Michael Moore observed almost a decade ago the tendency for military recruiters to seek low-rent retail space.  This relatively large strip mall does not host a single nationally recognized tenant, nor big boxes of any real scale.

East Houma, with a mostly older housing stock and a smaller, less affluent population, predictably shows much of the same trend in terms of its big boxes and strip-oriented shopping centers: 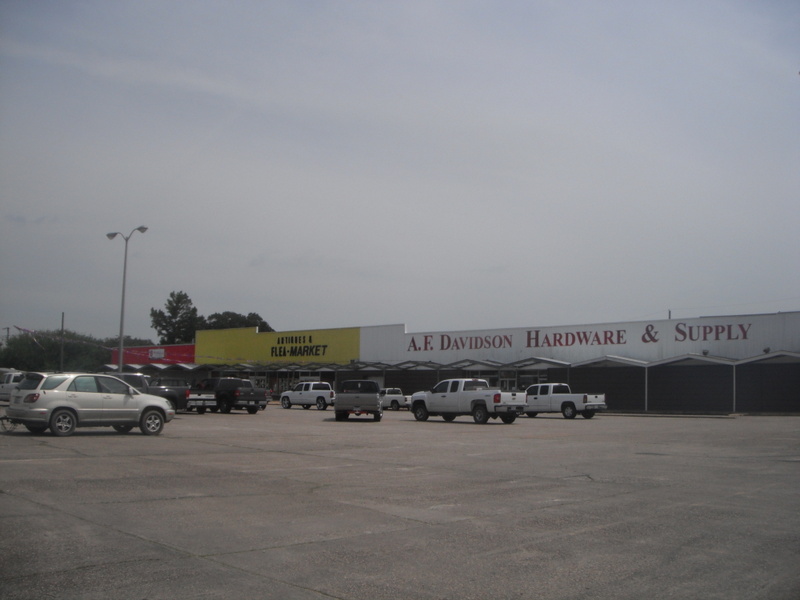 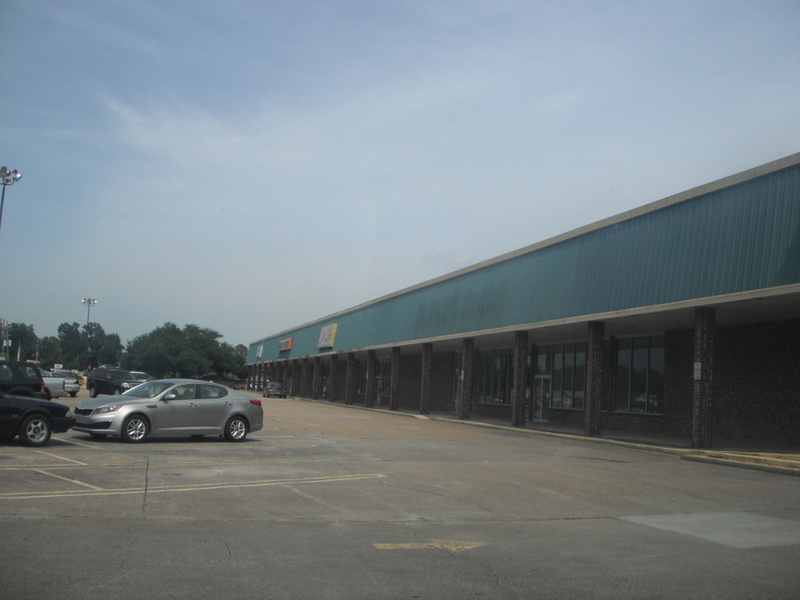 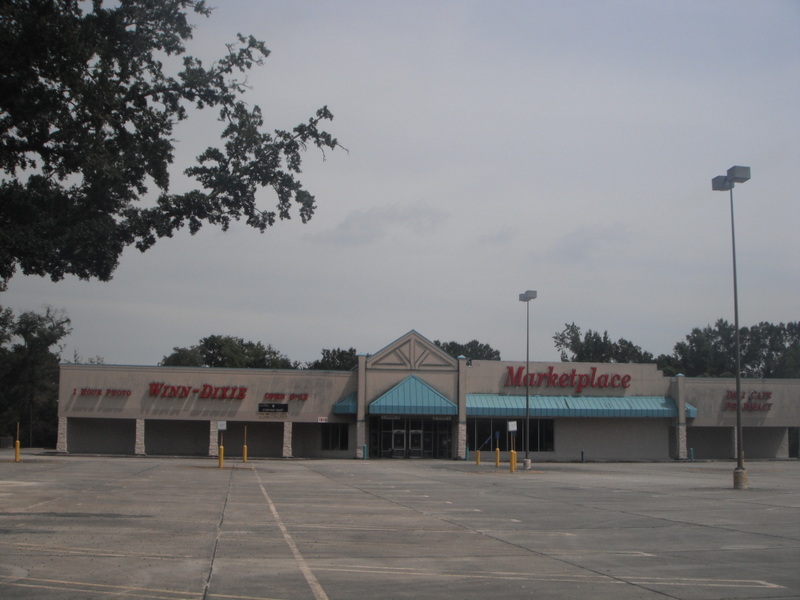 Most of the centers are either surviving in poor repair, struggling with high vacancies, or completely abandoned.  East Houma residents still have access to several reasonably large grocery stores, fast food restaurant chains, a smaller Wal-Mart, and a handful of basic services, but not a single strip mall (or its big boxes) would could be considered flourishing.

My favorite example, however, is the old shopping center with big boxes just a few blocks from Houma’s partially revitalized Main Street.  Its proximity to city and parish government offices fostered an idiosyncratic reinvention: 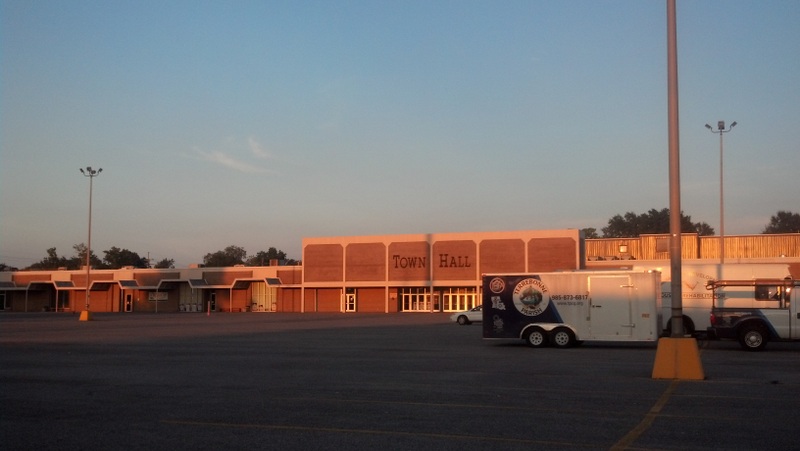 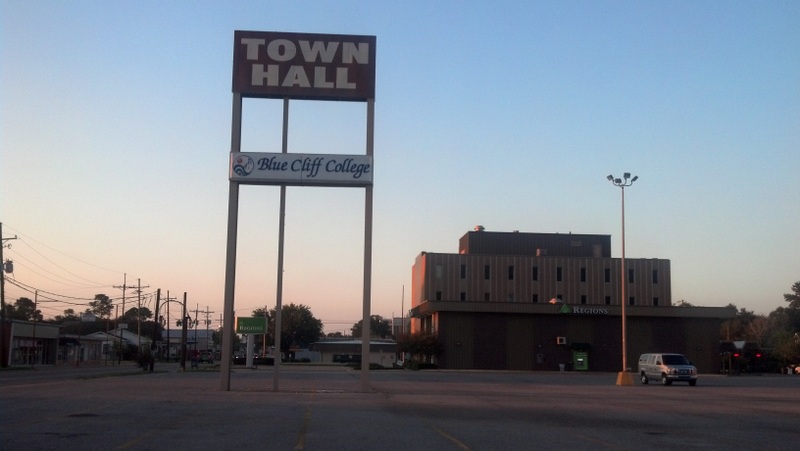 Yes, a former shopping center with one large anchor has transformed into administrative offices for city government.  However, the City of Houma does not seem to have renewed its latest lease: 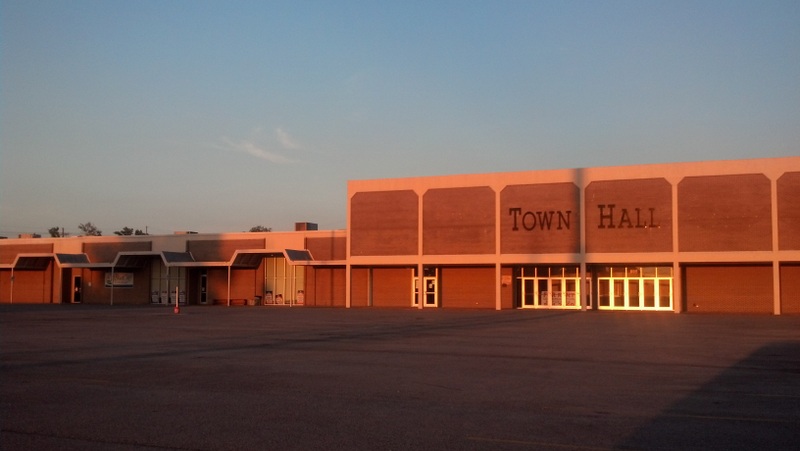 This photographic array of shopping centers at various levels of neglect does not intend to paint a negative portrait of Houma.  Frankly, few onlookers have demonstrated much sentimentality about the decline of automobile-oriented shopping centers from the 1960s to the 1980s.  But up to this point, nothing I’ve revealed has suggested a small metropolitan area with unemployment far below the national average.  A map of Houma is essential to distinguish the Houma’s flourishing retail corridor from its various struggling pockets. 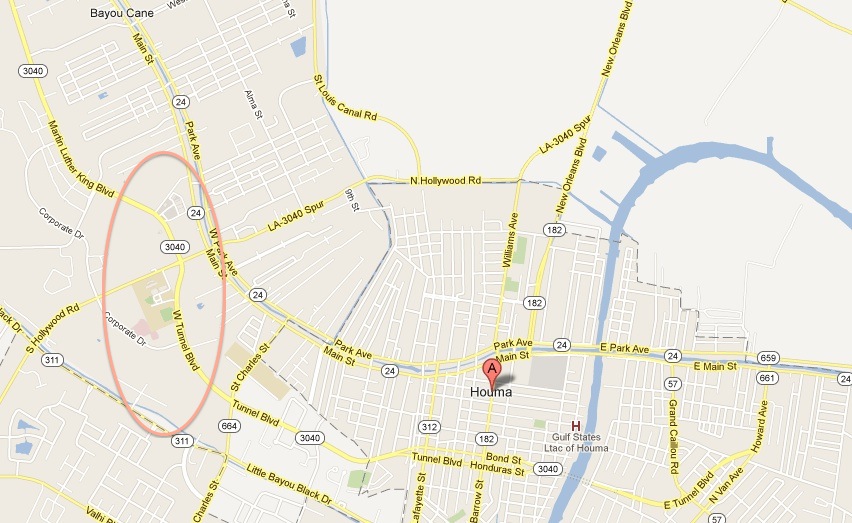 Almost all of the shopping centers photographed up to this point have rested within the Houma municipal boundaries; if they haven’t, they at least were close to large residential developments.  (The last photo series, showing the grocery store converted to City Hall, sits almost exactly where the Red “A” stake rests on the map.)  But the thriving retail corridor does not intersect with any major subdivisions; it is removed from the grid.  It largely sits on what was probably cheap land outside the city limits, and it represented by the red ellipse on the left side of the map: State Road 3040, called either Tunnel Boulevard or Martin Luther King Boulevard, depending on the location.  Along this arterial, the commercial landscape looks more like this: 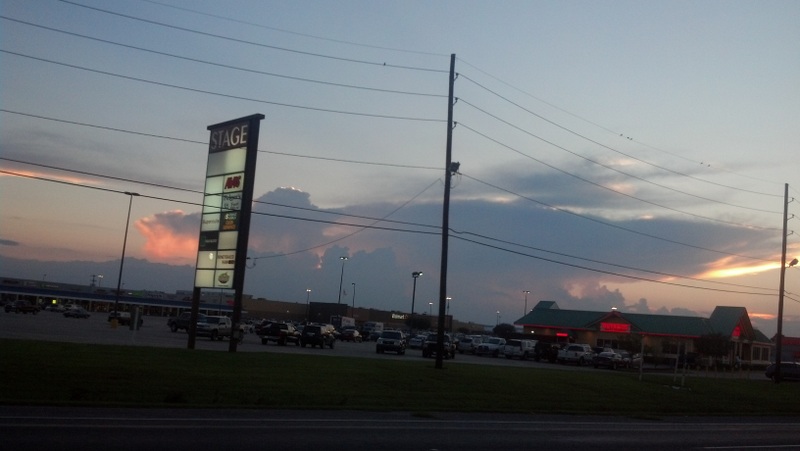 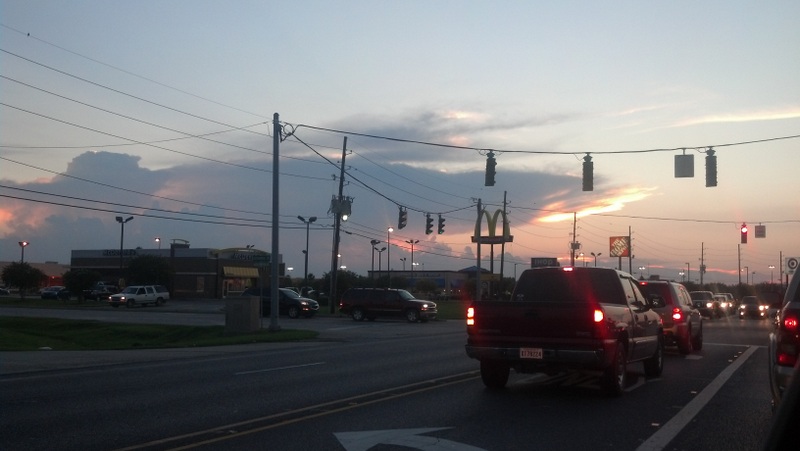 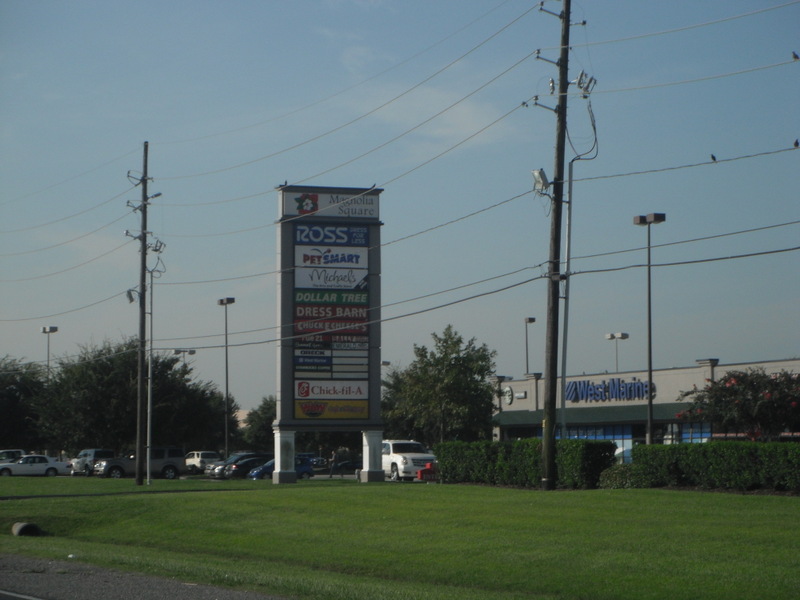 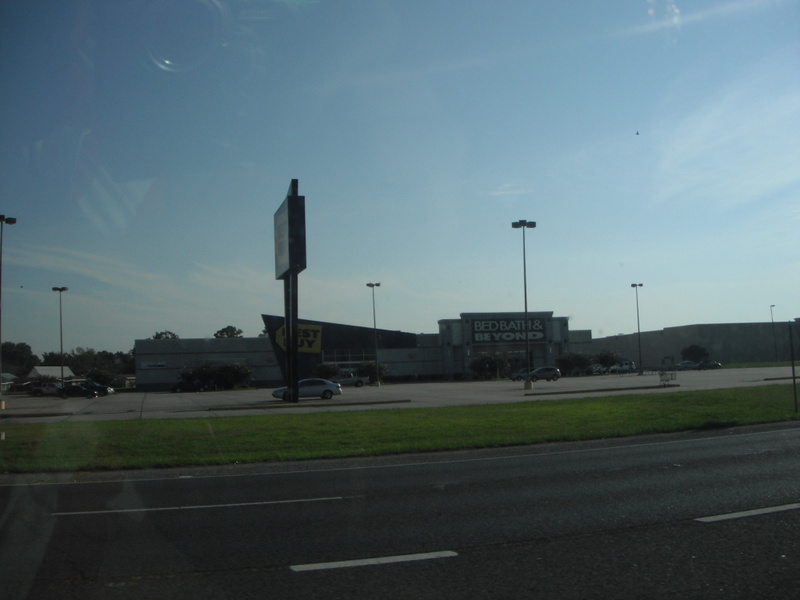 It doesn’t win any awards for aesthetics or pedestrian accommodation, but it is a prosperous retail corridor by almost every measurement.  It carries some of the most ubiquitous national brands: big boxes like Books a Million, Target, Best Buy, Hobby Lobby, restaurants like Applebee’s and Chili’s, as well as some emerging brands that fastidiously avoid sub-par locations, such as a Charming Charlie’s.  Predictably, the corridor also contains a Wal-Mart.   I counted only one sizable (over 20,000 s.f.) vacant storefront among the big boxes across the entire strip of more than a mile in length.  This stretch of State Road 3040 has become the official commercial/retail hub for the 100,000 residents of Terrebonne Parish.  Mostly big boxes, of course.

What this proves is that a city with the size and relative prosperity of Houma can sustain a diverse array of retail that befits its status as a minor metropolitan area.  (It earns this label through shared economic activity with the smaller city of Thibodaux, in Lafourche Parish 20 miles to the north; the Houma-Bayou Cane-Thibodaux Metropolitan Statistical Area contains around 200,000 people.)  Empirical evidence suggests that the retail typology has shifted significantly over the years; using definitions provided by the Urban Land Institute’s Dollars and Cents of Shopping Centers, the standard in Houma has evolved from several smaller neighborhood centers (averaging 60,000 s.f. in Gross Leasable Area) to a more metropolitan scale.  Like beads on a string, a series of loosely connected community centers (averaging 150,000 s.f.) function in aggregate as a regional center of well over one million square feet, allowing all the national names to stand rank-and-file in an easy display as motorists cruise by in their vehicles.  Meanwhile, any smaller shopping center that doesn’t fall along this corridor has kissed national names goodbye, with the exception of perennial laggards like K-Mart.

While I’d hardly assert that a single community like Houma can operate as a microcosm for similarly sized metros across the county, it is not entirely difficult to find other examples in otherwise culturally unrelated municipalities.  My home state of Indiana has two smaller cities, neither of which can boast an economy as strong or stable as Houma but are more populous (at least for now).  Anderson and Muncie have witnessed a similar migration of all major retail: in Anderson, most all retail hugs a two-mile stretch along Scatterfield Road, running just to the east of the older parts of the city.  And the smaller shopping centers not abutting Scatterfield are typically dying or dead.  In Muncie, the commercial main street is McGalliard Road, an arterial north of the old city center, filled with all the big boxes one might expect.

Houma and Muncie at least share indications of a reawakening interest toward specialty retail in their historic downtowns; Anderson cannot claim such a renaissance at this point.  While the trends on display in these smaller cities may not shed much light on what’s happening in metros over one million inhabitants—metros with an extensive network of discretely incorporated suburbs—they at least provide some added texture to our understanding of the omnipresence of decentralization forces at work.  Automobile dependency is ostensibly so great that neighborhood shopping isn’t necessary; in a small city, it is just a convenient to line all the retail up in a row on a busy high way on the more prosperous side of town.  One could critique the thriving commercial corridor of Houma as mindless sprawl for its appearance and utter disregard for transportation alternatives, not to mention its apparent avoidance of municipal boundaries that would require it to contribute to the city’s tax base.  But retail supply has long pursued the latest locational trends to save money and capture a broader clientele, while leaving the blight of obsolete older typologies in its wake.  Whether the shift in Houma is sprawl or part of a broader regionalist way of thinking (opening the visibility of these storefronts to all of Terrebonne Parish and not just those who live in Houma), really depends on how planners and economists contextualize their data.