A few years ago, I surveyed storefronts across the downtown of Cambridge, Massachusetts, interpreting their various placard signs as a proxy for the evolution of a city whose demographics and character have changed significantly over the years.  As Cambridge has morphed from a old, intermittently gritty bohemian college town into an upscale tourist destination, the few local establishments that have clung to their now primo locations stand out like “a Chevy Malibu parked among all the Volvos and Audis”, to use my apt analogy from a few years ago.  Many of Cambridge’s retail newcomers have been national upscale chains like Talbot’s or Crate and Barrel.  As a contrast, the remaining local stores have ardently retained their aging faded signs as an icons of distinction, no doubt hoping to inspire a particular reaction among visitors to Cambridge: “That place must me a local institution; look how old the sign is!”

I would never claim to say that Cambridge’s transformation is complete or fully-realized.  Cities are perpetually volatile, and its next phase may invoke something that no one can anticipate, reflecting the tastes of a consumer contingent that does not yet exist.  Whatever the future of Cambridge, its gentrification is unambiguously more pronounced than East Passyunk, the South Philadelphia neighborhood featured in this blog post. 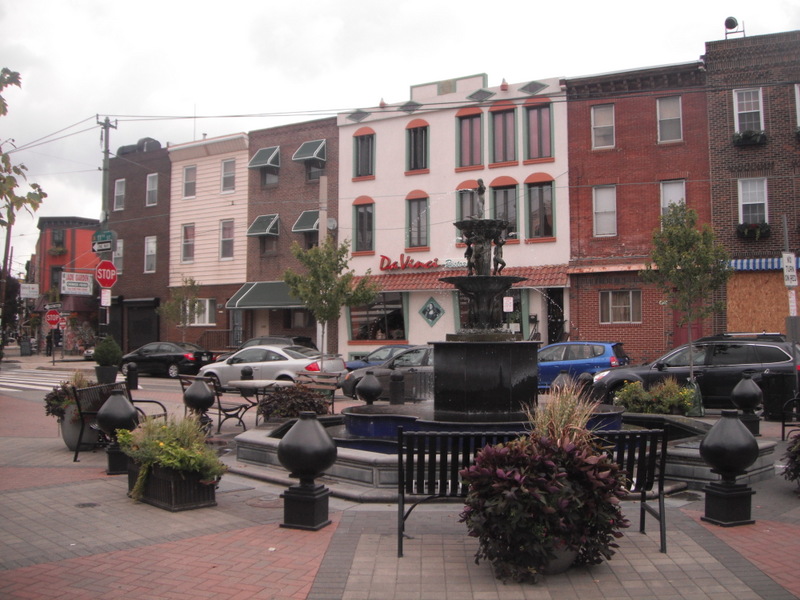 Long a stronghold of the region’s Italian-American community, South Philly has evolved considerably over the last three or four decades—from an overwhelmingly working and lower-middle class stronghold of the region’s Italian-American community to a patchwork of varied demographics: impoverished African American and southeast Asian neighborhoods, Mexican vendors in the formerly exclusively Italian market, a small (and shrinking) Irish enclave clinging valiantly to survival along the Delaware River, a tsunami of young professionals surging from the north, and, yes, quite a few squares in the quilt that remain resolutely blue-collar Italian.  When I lived in Philadelphia in 2004, the East Passyunk corridor was one of them.  Just a few blocks away from the economically disadvantaged Point Breeze neighborhood on the other side of Broad Street, East Passyunk no doubt looked very much the same as it did in the 1950s.  The storefronts featured family-run dry cleaners, hardware, bakeries, tailoring, convenience stores, and so forth. 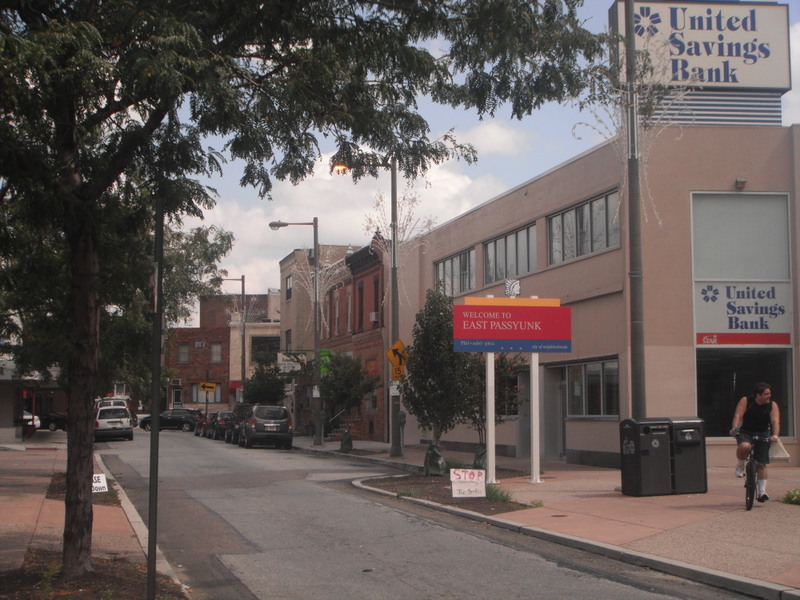 Not anymore.  In the ensuing eight years, the infantry of yuppies that had already stormed the affluent Bella Vista neighborhood decided to push their front line further south.  They probably found East Passyunk more affordable, more relaxed, maybe a tiny bit easier to park the cars.  Home values have tripled in the last decade, and quite a few of those mom-and-pop establishments I recognized have morphed into fair trade coffee shops, pilates studios, sushi bars—you know the drill. 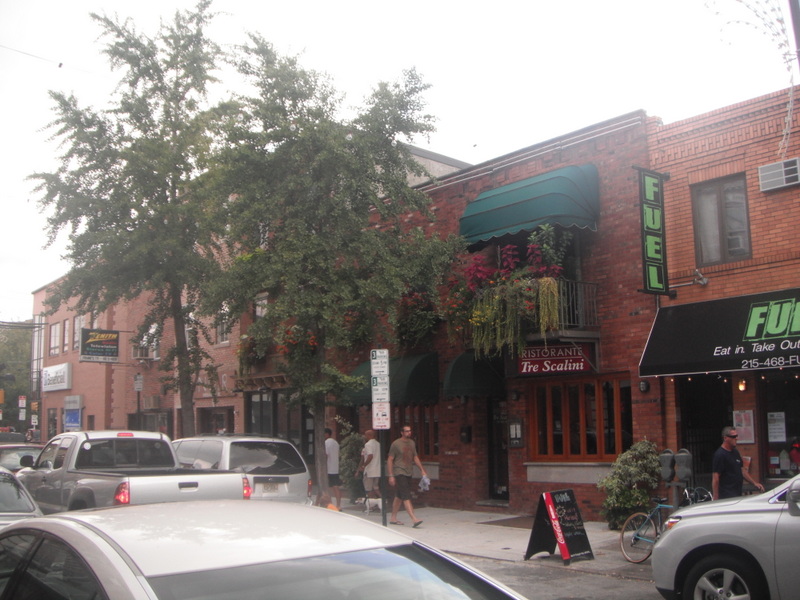 Interestingly, several of the standby Italian eateries remain in the neighborhood but have themselves gentrified, offering a few more gourmet menu options as a response to the more moneyed demographic (or, more likely, the same beloved specialties as before but at a higher price).  Take this one, for example, which I don’t believe is anything fancy, but apparently it recently spruced itself up considerably: 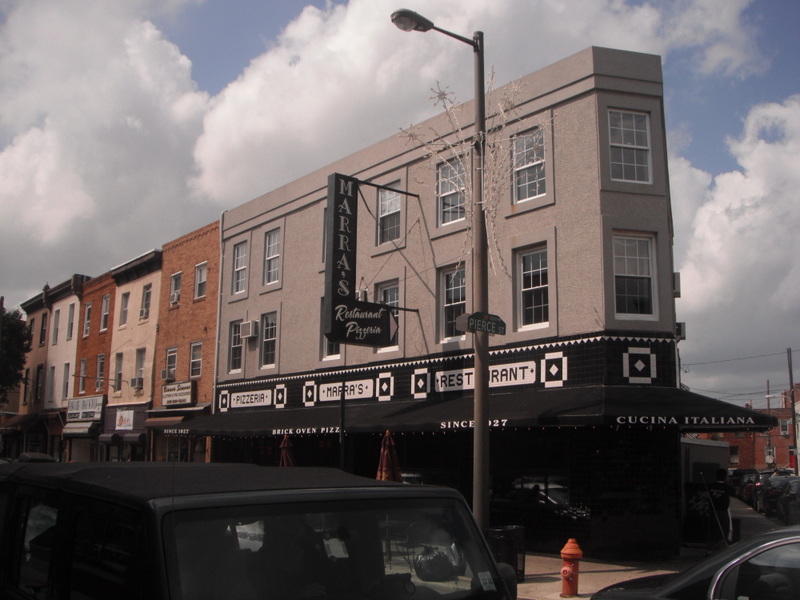 Some of these old standbys now offer valet parking, which would have seemed ridiculous along East Passyunk twenty years ago, but again demonstrates both a response to a clientele that is not only more likely to own cars, but they would also have no qualms shelling out an extra Andrew Jackson to shift the burden of parking that vehicle onto someone else.

Many of the long established Italian-American families remain, and not all of the traditional retail has fled or capitulated to yuppie encroachment.  A quick scan across the commercial corridor at any point reveals the bifurcated income levels, and all it takes is a look at those signs.  Take, for instance, this very typical view along the sidewalk at a more southerly portion of East Passyunk Road: 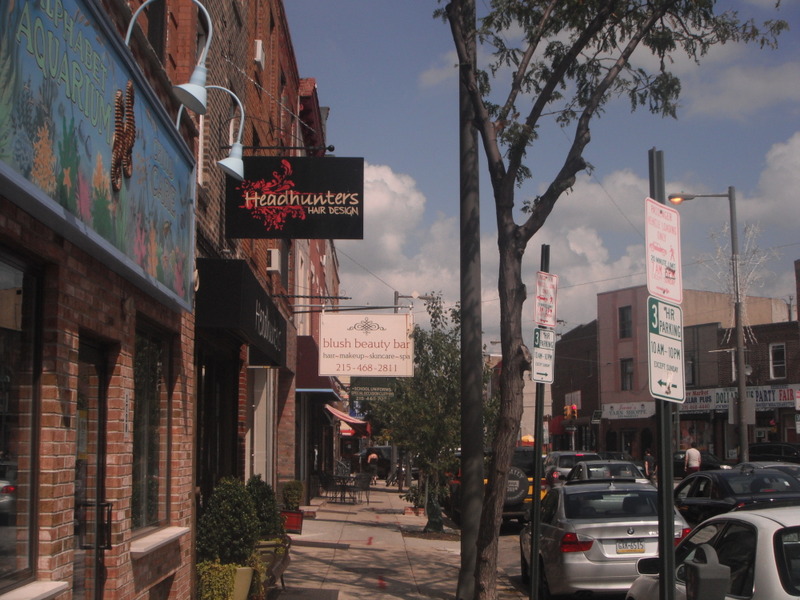 And the storefront on the opposite side of the street: 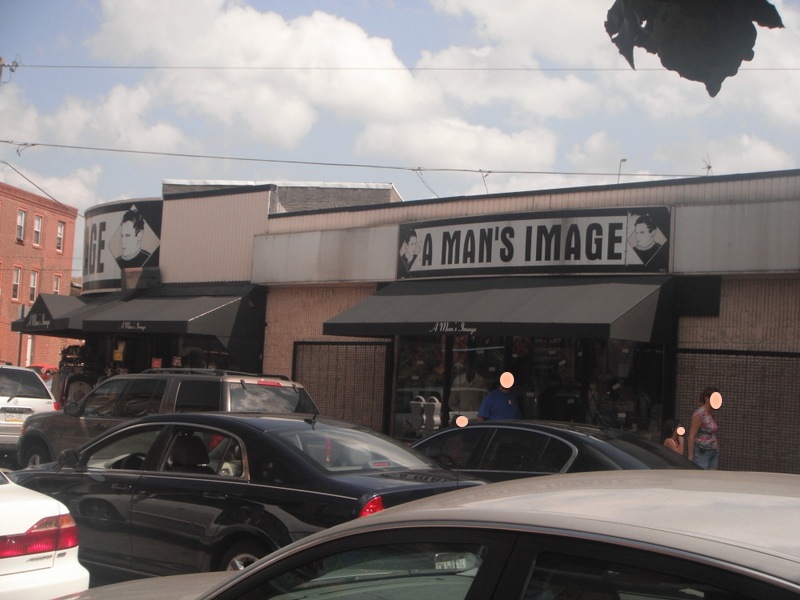 In contrast with downtown Cambridge, I cannot detect very much conscious interplay between the old and new signage here.  The old signs in East Passyunk offer less untapped semantic content than the vintage marquees of Harvard Square; the elder businesses here in South Philadelphia don’t need to distinguish themselves from upmarket national chains, because, at this point, virtually nothing in the neighborhood is a chain.  So in East Passyunk, the age of signs connotes one obvious distinction: income.  Old signs equate to old businesses, which are the domain of the working class families who have lived here for generations.  Only very recently have these households sat cheek-by-jowl in rowhomes filled with affluent professionals.

The income/education disparity manifested by these signs does not at this point seem like a heated kettle ready to boil over.  They seem to co-exist peacefully in general.  But one sign in particular demonstrates the chasm in consumption patterns between neighbors better than any of the others. 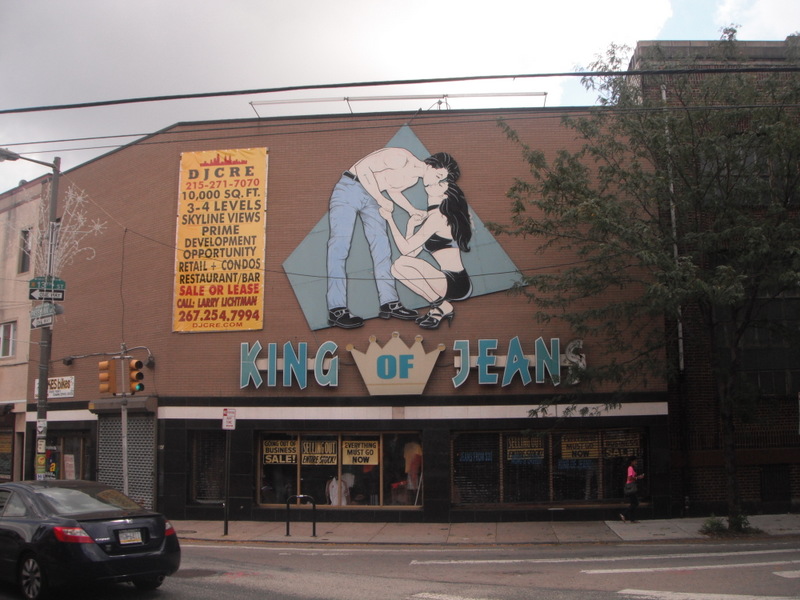 It’s hard to find an online reference to King of Jeans that doesn’t feature such adjectives as “iconic”, “landmark”—even “spectacular”. The size of the sign doesn’t hurt.  As the woman in pink at the lower-right of the photo indicates, it’s huge—it spreads across three full stories and a cladding that conceals four buildings cobbled together.  But the content of the sign is what makes it truly irresistible for some.  Part roller disco, a little greaser-rebel, a soupçon of S&M, and a healthy dose of now broadly-known Guido culture, the sign’s ability both to bewilder and offend has elevated it to the level of a South Philly meme.  If King of Jeans intends to evoke something, the owner sure ain’t telling, but that’s part of its mystique.  In fact, the owner might not be doing much besides fighting his or her way through court: evidently King of Jeans is seriously tax delinquent, which may explain why the conspicuously old-time vendor (confirmed by the signage) is closing the store after so many years.  Is the inevitable demise of King of Jeans a further symptom of considerable gentrification?  Perhaps the combination of low sales (shrinking old-school South Philadelphian clientele) and high costs (more taxes due to escalating property values) stymied the long-profitable business.

The real indicator of things to come: a local developer has bought the property and has proposed to transform it into apartments, offices, and retail.  Now the East Passyunk fan base has begun rallying behind that sign.  While everyone seems to concede that it can’t remain at its current location—a building whose upper-level fenestration got sheathed decades ago (just as it did across American commercial districts in the 1950s, and I blogged about it recently http://dirtamericana.blogspot.com/2012/08/nostalgic-for-future.html) –most agree that it should never leave Philadelphia.  The developer has agreed to salvage it, and ideally it will remain in South Philly.  But all this buzz merely demonstrates the polyphony of taste cultures who ostensibly feel a certain degree of stewardship over neighborhood relics such as King of Jeans.  Nobody who patronizes the street’s new sushi bars and acupuncture studios genuinely believe the sign is awesome or spectacular.  Rather, the yuppie/hipster denizens (whose consumer tastes merge more often than either constituent is willing to admit) share a fondness for irony, which does not preclude them from mocking the potentially more lowbrow tastes of the working-class families who’ve lived in the neighborhood for decades.  Yet the swirl of opinions and emotions surrounding this simultaneously sleazy/kitschy sign is more complicated than this, because no evidence exists that the long-established Italian American families cherish the sign or the establishment any more than the yuppies do.  Sure, the two stakeholders here might find common ground at a quality, long-familiar restaurant or bakery, but tastes in apparel are simply too ephemeral and too demographically precise for a store such as this to adapt very easily.  Restaurants often suffer if they deviated from long-proven model; clothing stores will die if they fail to change.  It’s likely that the King of Jeans was ready to descend from his throne, regardless of tax delinquent status.

One final rumor further beclouds any further analysis of the-sign-that-nobody-loved-until-now: several native Philadelphians can attest that it isn’t even that old.  Thirty years tops, but possibly only twenty.  Nowhere near as old as some of the legitimate institutions that have survived the encroachment of the creative class on East Passyunk.  If the rumors are true, the sign for the King of Jeans warrants an entirely new aesthetic reconciliation.  Did the proprietor deliberately design it to look old and faded, so it would appear as old as some of the mom-and-pops nearby?  Were the owner’s promotional sensibilities so tongue-and-cheek that he could anticipate a market hungry for ironic cultural references, for cheesy vintage signs?  Was the owner trying to stimulate nostalgia among the working class Italian American demographic that exclusively lived there at the time, or is the sign merely trying to provoke them?

More likely than not, I’m imposing a level of consciousness into this collision of cultures by interpolating a conflict that doesn’t actually exist.  In a matter of weeks, King of Jeans will be gone, and the building that houses it will undergo a complete facelift.  No doubt the first floor will eventually house a slow food kitchen, a Cambodian gastropub, designer apparel for dogs, vegan cheesesteaks, or similarly themed retail catering to the neighborhood’s cadre of bourgeois bohemians.  All with brand-new signage further shifting the old-to-new balance in favor of the latter.  Unless these stores’ proprietors choose a deliberately old-fashioned, outdated, or unfashionable type of signage (I’m thinking tungsten filament lightbulbs—not green but still worth as a retro hat-tip) to meet the newcomers’ insatiable appetite for cheeky irony.  And the appreciation and commodification of irony—more than educational attainment, income levels, or number of children—may ultimately prove the wedge that divides the two camps here in Philadelphia’s least heated class war.