Nostalgic for the future.

These days it’s hard not to ponder some of the decisions property owners were making to downtowns at the dawn of widespread suburbanization that took place in the 1950s.  The small southern Louisiana city of Thibodaux (population 14,500) has a solid regional university (Nicholls State) a mile to the west of a fairly well-preserved historic downtown, which is clearly attempting to revitalize in a post-decentralization landscape by filling the old buildings with restaurants and specialty boutiques.  Nothing new there; lots of downtowns are attempting this, in communities of all sizes.  And, if you visit plenty of American towns and smaller cities, the photo below isn’t earth-shattering either. 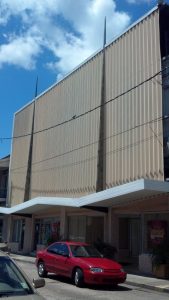 But it should be.  Why would a 19th century three-story building downtown lack windows?  Why would it host a façade made of what looks like corrugated tin?  Or what about that thick overhang above the first floor that alternates between two oblique lines?  Does the rest of the Thibodaux downtown look this way?  Not really. Here’s a view down the same street. 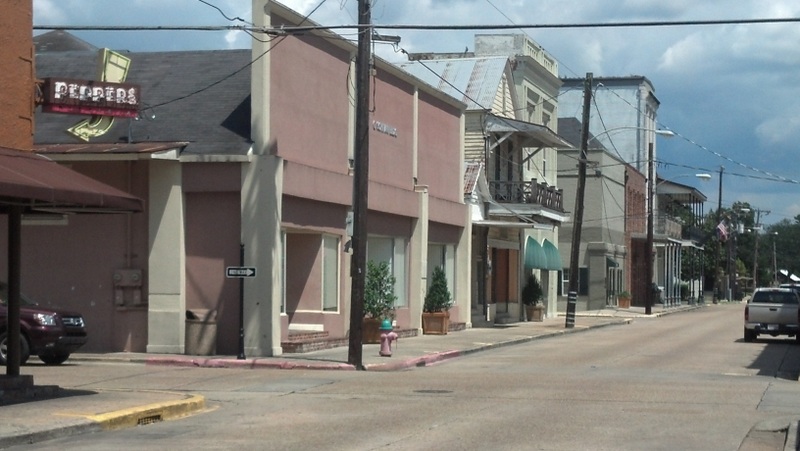 And a view of the next one parallel to this: 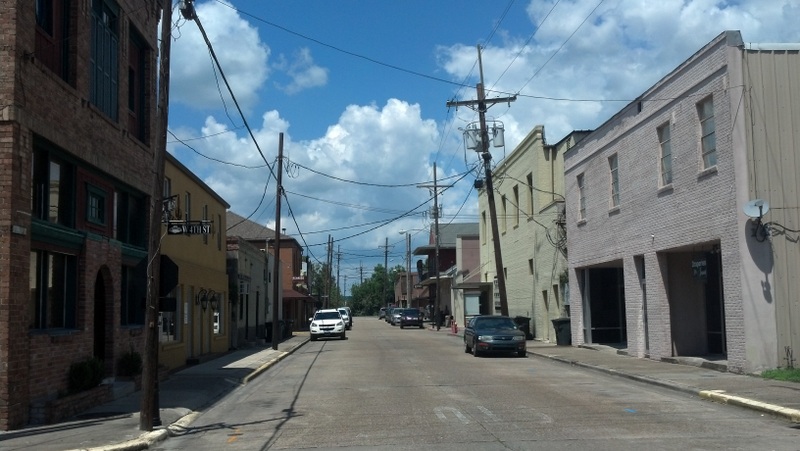 So basically this one building has these Sputnik-era gestures while the rest looks pretty normal.  And yet, this anomaly doesn’t even cause a head to turn, because it’s still commonplace in downtowns of small cities across the country.  What’s going on with this particular building?  A more careful examination of it in relation to its neighboring structures should offer more insight: 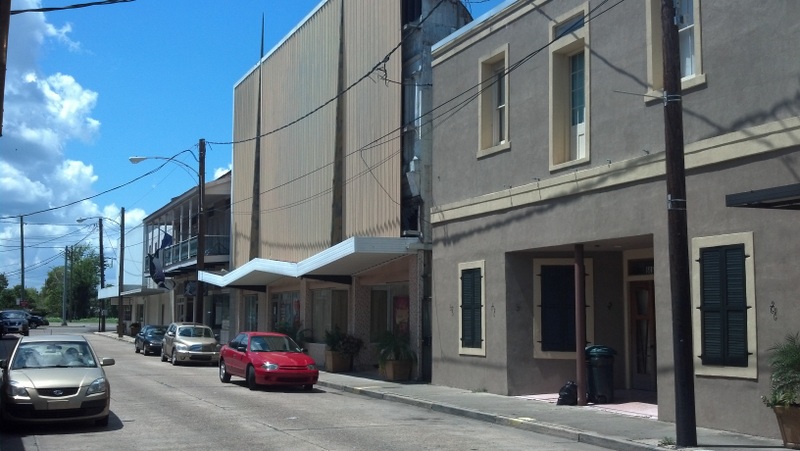 Our featured oddity is a traditional commercial building with a false façade—a contrivance most likely born out of the time when antennae, rays emanating from stars, helices, and spirals emblematized modernity.  The futurist era in architecture peaked during and after the First World War, typically manifested by huge, monumental institutions or incredible feats of engineering, much of it conceived on paper but never built.  Its uncomfortable association with Italian Fascism no doubt stifled its influence in the US after World War II, but futurism didn’t exact die; it ramified.  The decade after the second war heralded the dawn of widespread suburbanization, when the American dream of owning a brand-new 950 square foot single-family detached house had burgeoned from an aspiration for the affluent to something broadly attainable for the middle class.  Decentralization domesticated futurism—one might even say that suburbanization was futurism’s apex in accessibility.

It’s hard to avoid glittering generalities in an attempt to collapse this Weltanschauung into a few paragraphs on a blog.  Suffice it to say, the emergence of American middlebrow futurism coincided with post-war optimism and economic prosperity, as well as the nascent efforts to dominate space exploration and assert cultural dominance over the nation’s biggest competitor and ideological opposite, Soviet Russia.  As the two nations’ space programs attempted to colonize a realm outside the earth’s atmosphere, the American middle class was forging its own frontier, and these new suburbs—where land was cheap and parking for cars was bountiful—assumed an aesthetic that, whether conscious or not, reacted to the staid, brick-and-mortar, cluttered appearance to the traditional downtown.  Houses, by comparison, remained relatively conservative in their design, if much more broadly spaced apart.  But the commercial landscape changed radically.

The paradigm for this much more ubiquitous second generation of futurism is Googie architecture, a incarnation most commonly associated with southern California (Los Angeles is, after all, the perfection of post-war decentralization as a lifestyle choice).  But examples popped up across the nation, particularly as some of the earliest enclosed shopping malls.  I can’t think of a better example than the Northland Shopping Center in Jennings, Missouri, a suburb just outside of St. Louis.  Googie was at its ostentatious best with the fonts and graphics that comprised its signs, evoking a wonderland where “the future is now”, where Space Age starburst flourishes owe a great deal to The Jetsons (or vice versa, more likely, since the short-lived cult series emerged in 1962, when Googie was already on the wane).  And the architecture itself, emphasizing low-slung horizontality almost to flaunt how much more space they have out in the suburbs, foreshadows the Mid-Century Modern era that dovetailed partly with Googie and futurism, but thrust those ultra-contemporary gestures squarely into the domestic world.  All three movements reveal a certain level of influence on that goofy sheath that clings to the building in downtown Thibodaux.

The aforementioned Northland Mall is a particularly apt example of Googie’s doe-eyed embrace of technological change, because the mall no longer exists.  It is a dead mall, celebrated nostalgically through photos; its surrounding suburb, Jennings, is a victim of a second wave of middle class flight and now largely distressed.  Such is the fate that has befallen an overwhelming majority of Googie relics, whose dependence on whimsical, kitschy bourgeois tastes meant that no one was defending them when had become outdated by the cynical 1970s.  Since it was always a pop-art variant of futurism, its banality made it that much more disposable, and only a handful of archetypal Googie structures still survive.  Googie signs that aren’t in museums are often covered in rust.

Where does this leave the Cleaver-chic cladding of that old commercial building in Thibodaux? 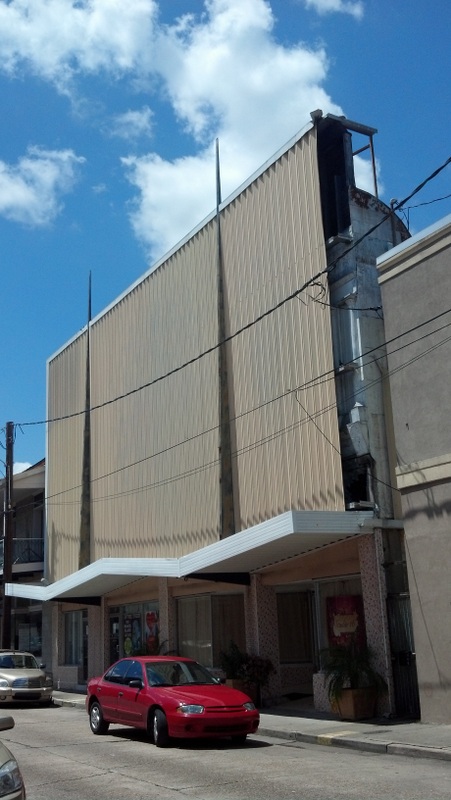 It’s a lot easier to speculate on its origins within a cultural and chronological context.  I suspect the property manager circa 1958 saw that businesses were leaving the downtown for those shopping malls right on the edge, where free parking was abundant, rents were cheaper, and the floorplate could hold larger volumes of retail.  Downtowns were starting to seem passé, and it was a last-ditch effort for the owner of the building to establish a modern look that could compete with shopping centers.  The Thibodaux owner wasn’t the only one to attempt this; old commercial buildings in cities large and small exchanged their brick facades for something sweeping, impermeable, and ornamented with astrophysics.  Its not a new building; it’s a compromise.  It’s Googie-lite.  The twin spires on the Thibodaux building are dead giveaways.

As metropolitan areas evolve continue to absorb newcomers, the best surviving examples of the Googie-futurist ethos are in relatively static towns of similar size to Thibodaux.  The larger cities with more political capital jettisoned them years ago, as public taste increasingly favors the “historic” look of the original building.   From time to time, one might encounter a Googie-lite façade in a larger city; New Orleans to my knowledge still has one in the heart of downtown that I’m particularly fond of.  But communities of Thibodaux’s size and smaller still have them in abundance, particularly if their downtowns are struggling or just emerging.  Let’s face it: fifty years after installations, futurism masks aren’t looking so great these days.  But it costs a lot to uninstall them, and the masonry underneath may require significant restoration by this point in time.  Business leaders in smaller communities are less likely to worry about this, if the building is still attracting tenants, and particularly if the cladding only affects the upper levels, which to this day often remain vacant in even flourishing historical downtowns.  (Case in point: half of the multistory commercial buildings in New Orleans’ French Quarter are still completely abandoned on the upper levels, as is the “Sanlin” building featured in the Google Street View above.)

My suspicion is that someone in Thibodaux (either the City or the building’s owner) will doff this corrugated metal within the next twenty years, if a hurricane doesn’t blow it off.  In fact, by most metrics, it would be a sad indicator of economic stagnancy if it stays on that long; it would most likely mean that the downtown never could encourage enough investment to initiate a core level of what most people these days consider “improvements”.  So, in the interest of restoring a downtown to its historic essence, we most likely will see another of the ever-dwindling stock of Googie façades meet its demise.  Is it tragic, or just an example of how shifting consumer tastes force real estate investors to adapt their building stock in an often cyclical fashion?  De-Googie-fying older buildings obviously parallels the “daylighting” of many enclosed shopping malls over the last twenty years, converting them into lifestyle centers, town centers, big boxes with power strips, and so forth.  I have deliberately withheld judgment in the Thibodaux example because I have no vested interest—however, both parties that passionately argue their case (“rip it off” versus “retain it”) would ironically identify themselves as historic preservationists, removing remaining vestiges of futurism.

Much more would be at stake in Thibodaux than at the Northland Mall, since the mall’s lifecycle was only 50 years (1955-2005), barely long enough to meet the National Park Service’s already generous standards for a historic property.  The photos above in Thibodaux show a long-historic building fitted with a newly historic sheath.  Love them or hate them, these sheaths are a threatened species: it’s only a matter of time before the small towns follow the big cities’ leads and extirpate all evidence of futurism.  When viewed through the lens of the metro-area counterparts, its not so much a question of how many more examples of the Northland Mall aesthetic have to succumb to the wrecking ball (or land fill) before we take action; its an issue of how many genuine Googie wonderlands are even left.

5 thoughts on “Nostalgic for the future.”