About 36 hours ago I added a new blog post on Urban Indy, which is accessible through this link.  It focuses on some putative improvements to Emerson Avenue on the southeast side of Indianapolis.

For many in metro Indy, the south side has a reputation that ranges from neutral to negative.  By some psychological assessments, being poorly regarded is better than suffering from complete indifference—at least antipathy suggests a certain intensity of feeling.  But indifference seems to be the general response when you ask a northsider about something going on in the southside; it might as well be Burkina Faso.  And, as much as this southside native hates to admit, there’s some justification for this disregard: the two-thirds of the metro’s population growth and probably four-fifths of its income density rest squarely on the north side of Washington Street.  The north side of Indy hosts more cultural institutions, parks, ethnic festivals, universities, greenways, bike lanes, independent restaurants, upscale shopping—you name it.  To a certain extent, it is understandable that the southside dwells outside the radar.

But well more than a quarter million people identify themselves as living on the southside, and their frustration about their low profile is essentially a ying to the northsider’s apathetic yang.  Many Perry Township residents have long griped about the scarcity of parks.  IndyGo is underfunded beyond any rational argument, but it’s particularly abysmal in the south, where only three routes extend very far, and even they only kiss the edge of Greenwood, the first southside suburb.  While the other sides of town boast greenways, multi-use paths, and converted rail-trails, the part of Indianapolis south of its pre-1970 boundaries has none.  Even sidewalks are often hard to come by south of Troy Avenue.

I will provide a glimpse of the “improvements” to Emerson Avenue through the pic below, but I encourage viewers to visit the Urban Indy link, where a discussion is already fully underway. 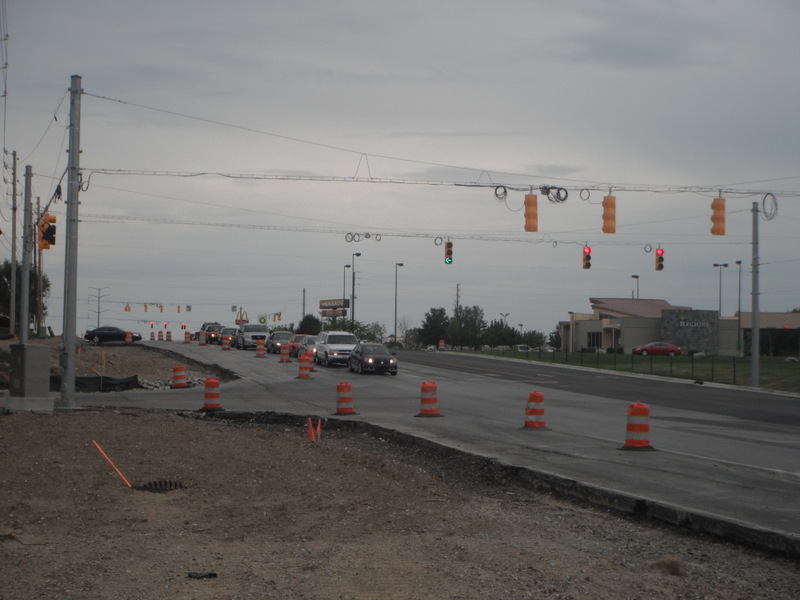