About two years ago on this blog, I glossed over the unusual skyline of Frankfort, Kentucky’s pretty, parochial capital city. 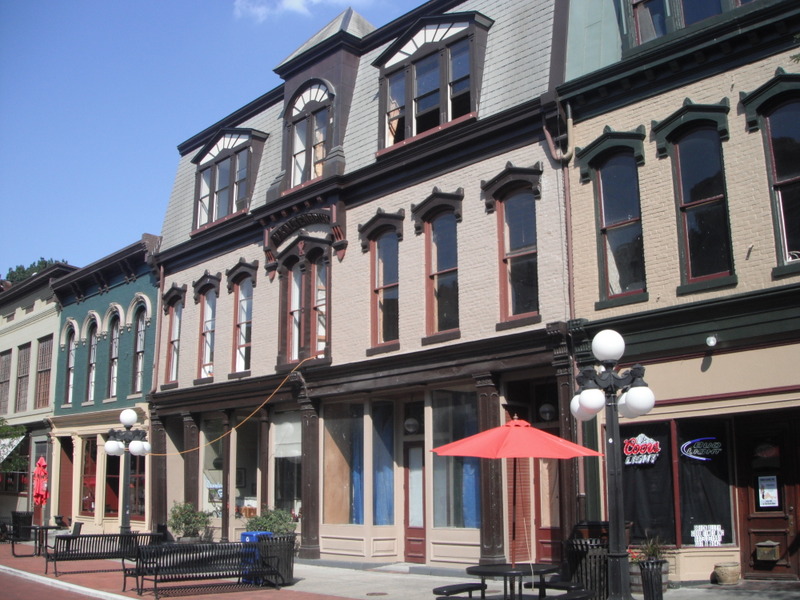 As capitals go, it’s an oddity: one of the least populated out of all 50 (only Vermont, South Dakota, and Maine are smaller); it’s also located less than 60 miles from either of the two largest cities, Louisville and Lexington.  Though its role as the seat of the commonwealth’s government would require Frankfort to host a number of important public sector jobs, it has never attracted any other industries, which has kept its population firmly lodged at around 25,000 for the last forty years or so.  Prior civic leaders could have encouraged these commuters to move to the town permanently, but to its credit, Frankfort has no need to be bigger: the population base to fill those government jobs is close enough either to the east or west at the two large “L” cities.  Lexington is only 25 miles away.  As Kentucky state employees have described to me, “Frankfort doubles or even triples in population during the work week, empties out promptly at 5 pm every weekday, and tumbleweeds blow across the downtown on the weekends.” It is the perfect embodiment of the US Office of Management and Budget’s neologism of a micropolitan area, referring to an urban cluster with a population between 10,000 and 49,000 that shares many of the characteristics of a larger metropolitan area, particularly in its enviable ability to attract commuters from a particularly broad radius.

Considering its role as the engine of the Commonwealth of Kentucky’s government, it should come as no surprise that Frankfort’s downtown shows evidence of a considerable amount of investment.  The remarkably intact commercial center has scarcely any old buildings that are vacant or in disrepair; a careful inspection suggests that very few have even faced the wrecking ball. 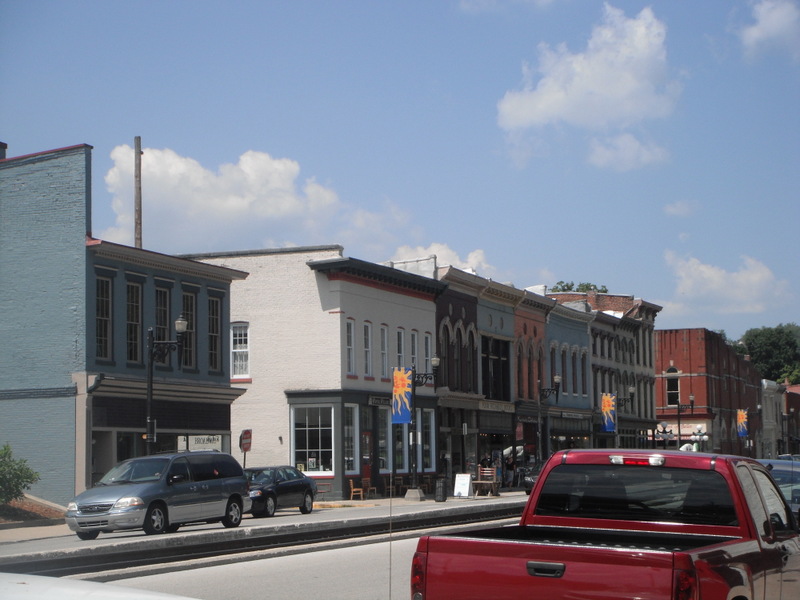 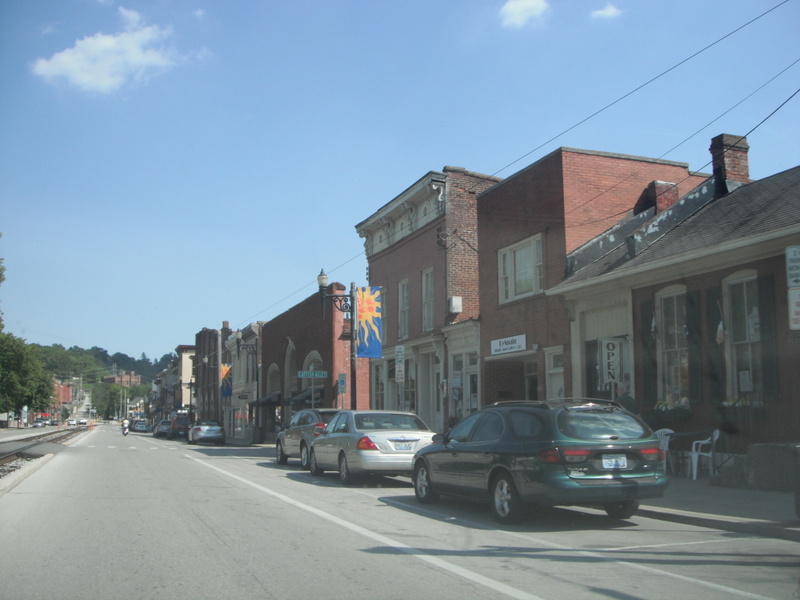 The old center of Frankfort comprises little more than 10 blocks, but the overwhelming majority of these blocks seem well-preserved.  Lacking any major private industry, Frankfort doesn’t have so much to worry about during a severe recession.  While the number of government employees may expand and recede in relation to the Commonwealth’s budget (or the dominant political party) the chances of it leaving the city altogether are virtually nil—thus, the city’s reason for being has kept it relatively stable and prosperous, unlike many similarly sized cities in the Rust Belt, whose fortunes collapsed in the last 50 years with the departure of a principal manufacturing employer.  And Frankfort offers a stark contrast to the rural landscape just 50 miles to the east (just beyond Lexington), in which the lumpy Appalachians hug economically devastated, ramshackle old mining villages or the impoverished clusters of trailer parks in the unincorporated wilderness that surrounds them.  Frankfort looks fantastic by comparison, and the emblem of Frankfort’s continued prosperity presides on a hillside several blocks southward, on the opposite side of the Kentucky River from Main Street: 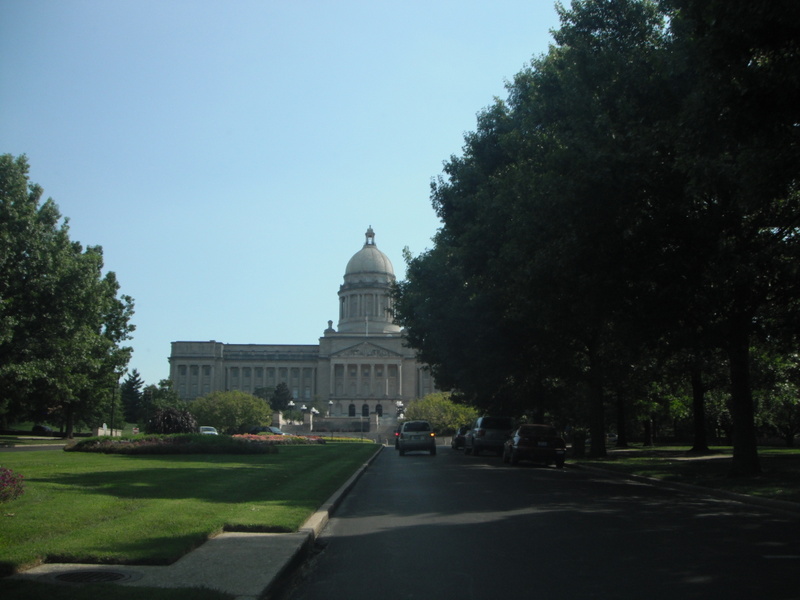 The cupola of the Statehouse asserts itself confidently from a lookout point along a western drive down into the valley that hosts the oldest part of the city. 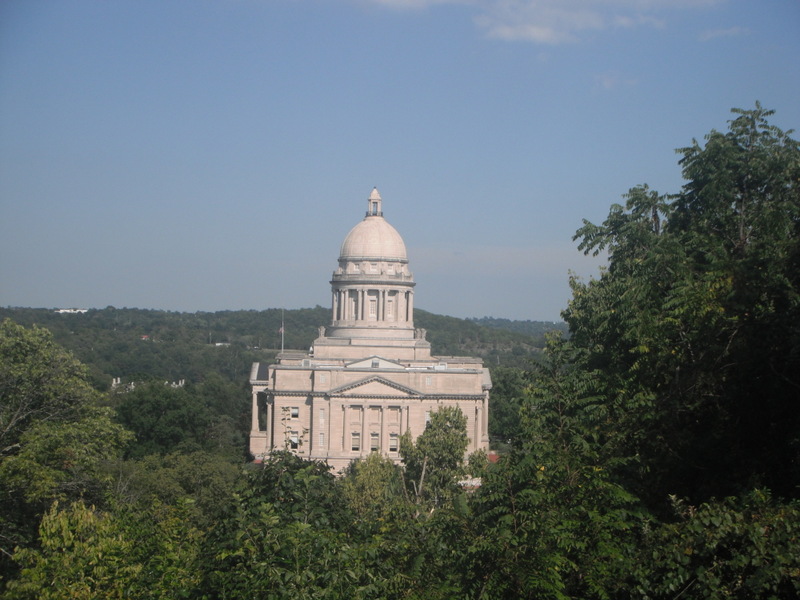 With an excellent stock of 19th century buildings in a compact little downtown bisected by the lazy Kentucky River and surrounded on all sides by bluffs or cliffs of limestone, Frankfort could muster up as much cachet as Santa Fe, another modestly populated capital.  But Santa Fe punches above its weight class, attracting hordes of tourists not just from in state but from across the nation and globe.  Despite its beauty, Frankfort is almost completely unknown among even the neighboring states, and the average Kentuckian’s most likely first (and only) encounter with the city is on an elementary school field trip to the Center for Kentucky History—if they even get that.  Even the surrounding Franklin County has only grown in single digit percentages in the intervals between the last three decennial censuses.  In short, Frankfort has the aesthetic potential to be a bucolic artist colony or a premier weekend getaway, but it resigns itself to an epicenter of drab bureaucracy.  Downtown isn’t completely dead—it has a few attractive bistros, some bars, a chocolate shop, and more law/accounting offices than you can shake a stick at.  Obviously the thousands of government workers need some places to eat and run the most routine of errands.  But aside from those conventional 40 hours in a week, the heart of Frankfort is dead on the weekends.  The pictures below provide evidence: 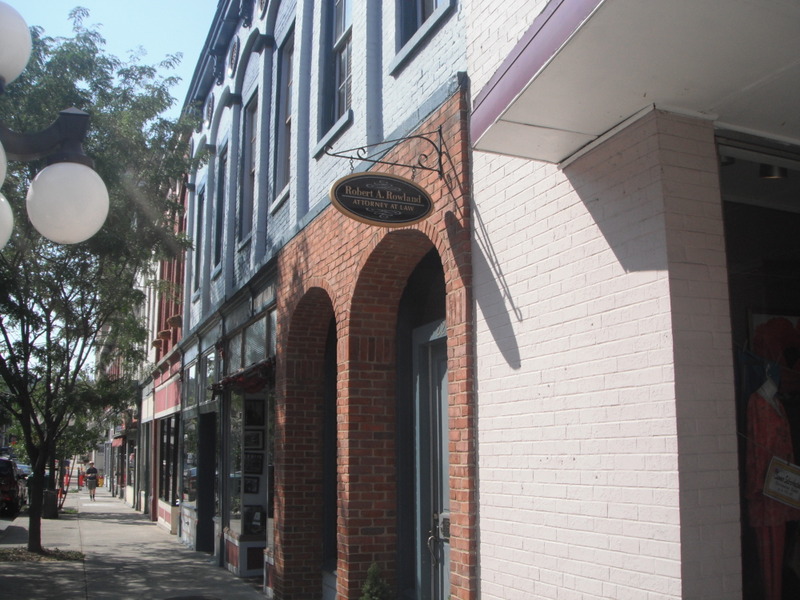 Not a lot of people out for the closing hours of a weekday. 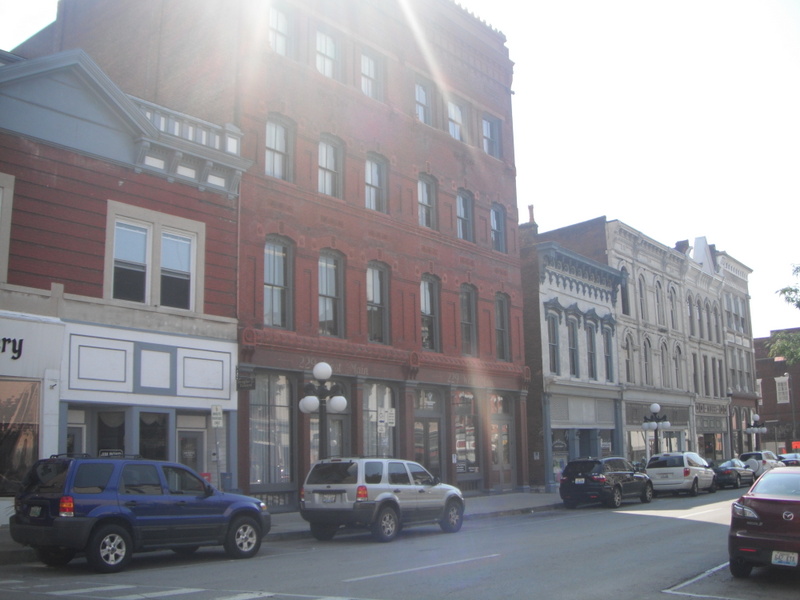 Most of the old buildings look cared for, but curtains are often drawn to hide service-oriented jobs that don’t depend on window displays the way retail does. 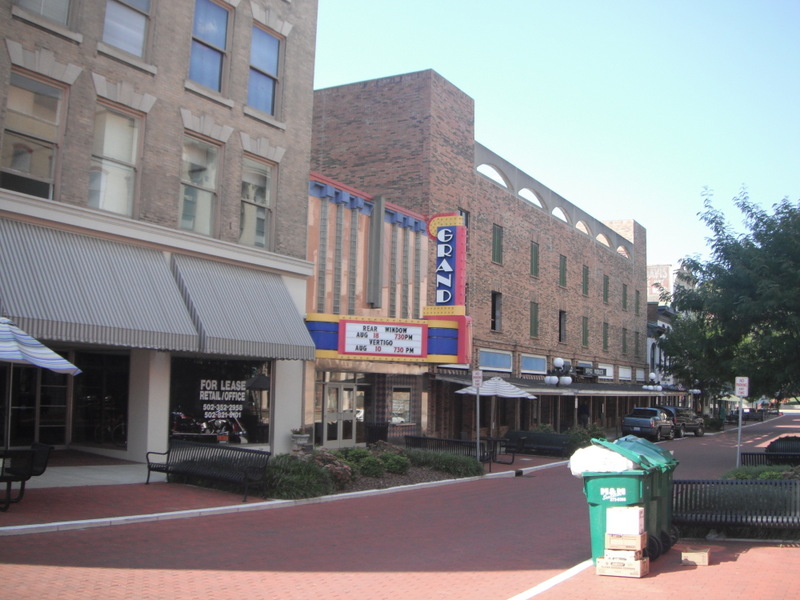 St. Clair Street, the most impeccably maintained block in the entire downtown, boasts a smartly improved and manicured streetscape, as well as an active old motion picture palace.  But elsewhere on the block, the whitewashing can only conceal the high vacancy levels up to a point. 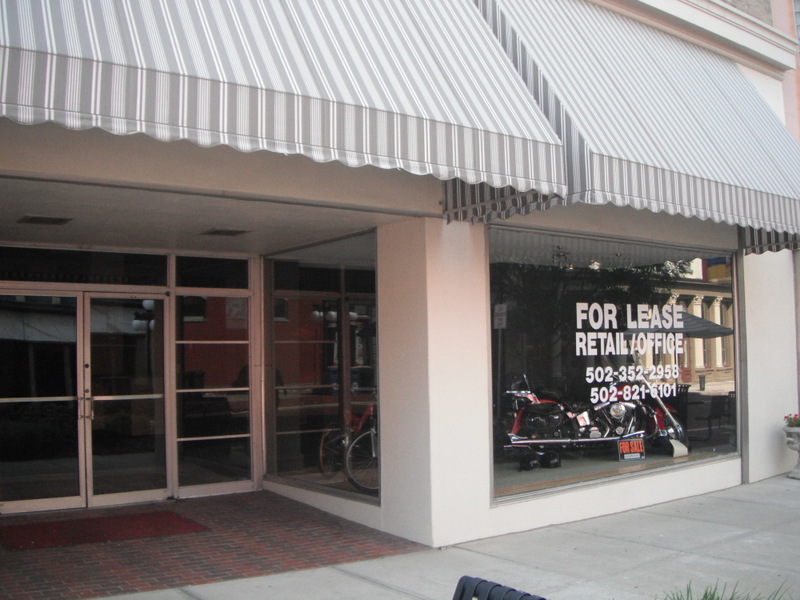 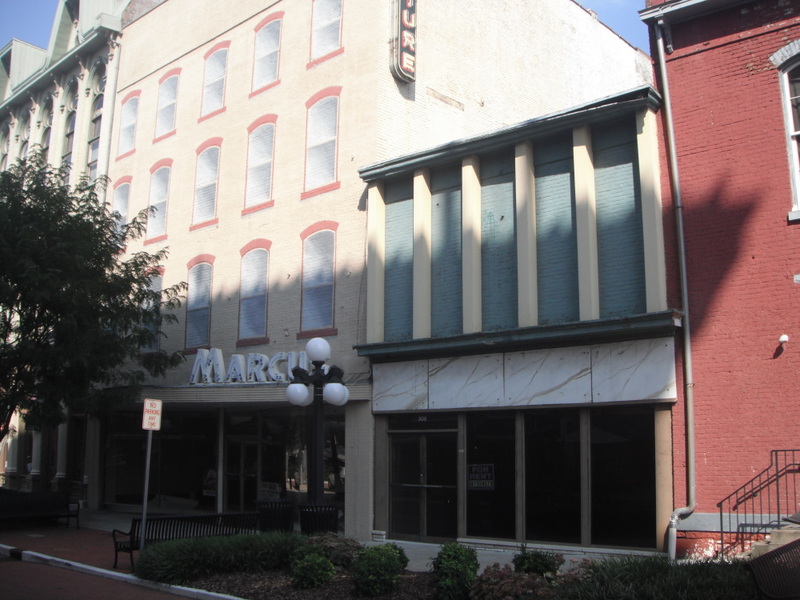 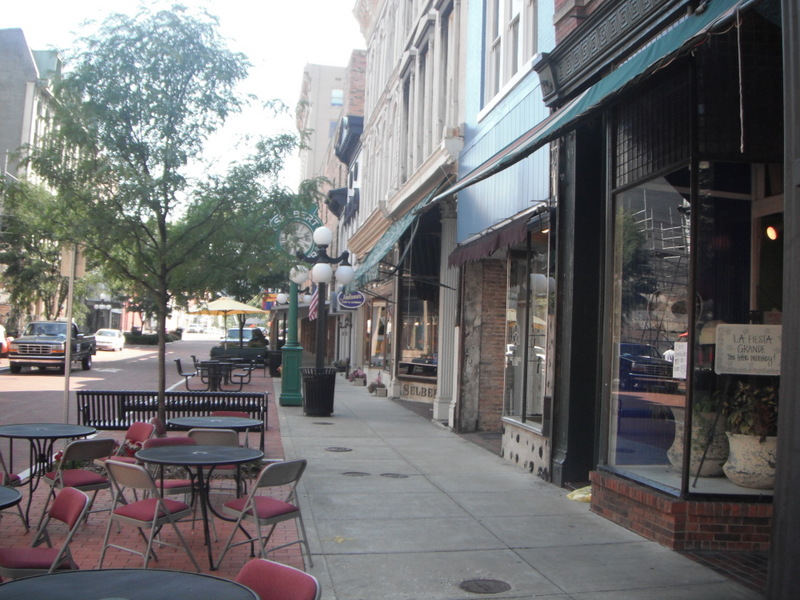 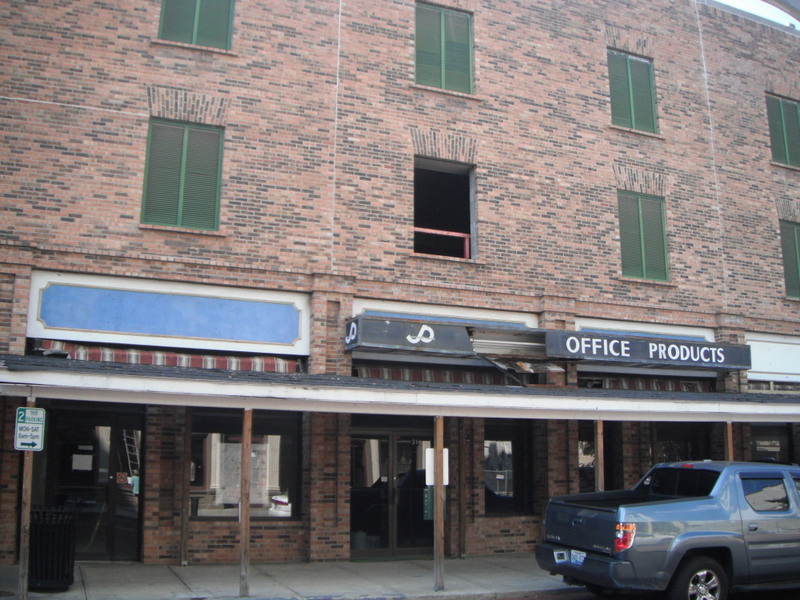 And even a city that never saw its major industries close—it never had any—still shows evidence of a commercial center that is struggling to remain viable. 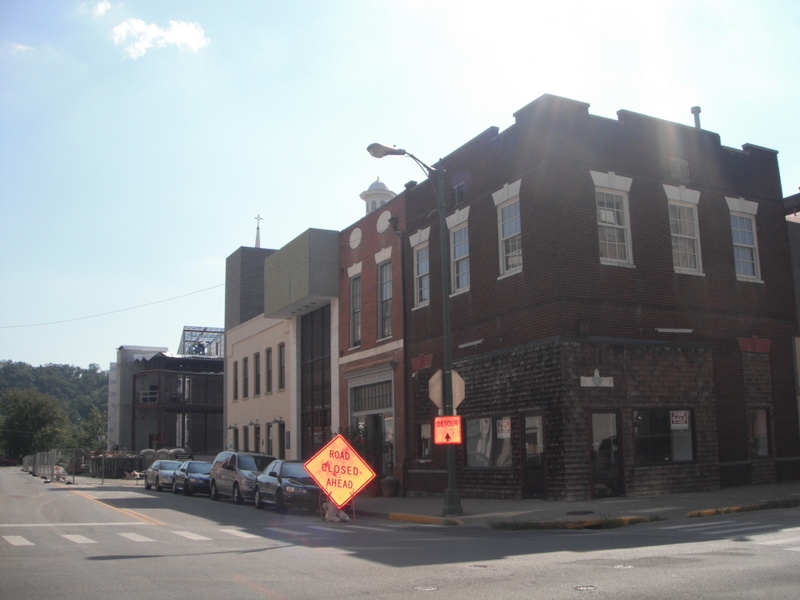 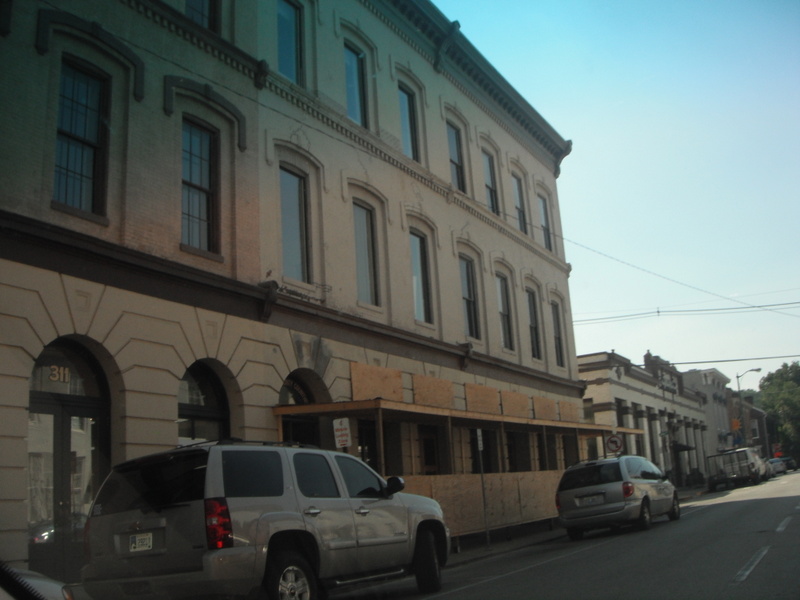 Somehow, in the life cycle of this town, a rupture has emerged.  A modest, well-maintained, economically stable community nestled in a verdant Appalachian valley has achieved to the unthinkable: near perfect banality.  This small city, though idiosyncratic in so many ways, is likely to strike most visitors as completely average—as unremarkable as a dinner at Bob Evans Restaurant. Frankfort’s shortcomings show no indication of a failure to invest, or even a failure to think big: the problem has nothing to do with the historic commercial center depicted in the photos above. It’s just fine.  The problem, implied in my previous Frankfort blog but expounded upon this time, becomes far more evident in some of the views of the city from a farther distance. 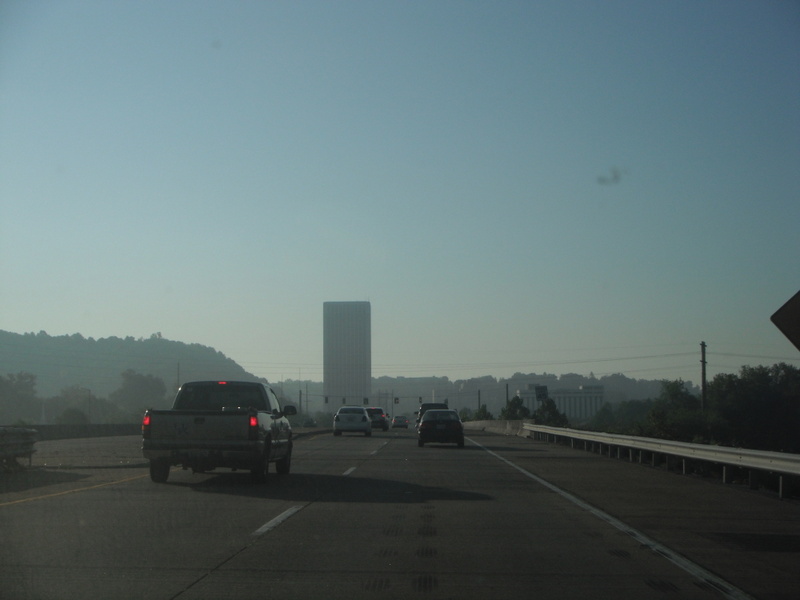 Approaching Frankfort from the north, a lone skyscraper obtrudes from the Kentucky River Valley more confidently than the limestone bluffs that flank it.  It is the Capital Plaza Office Tower—at 28 stories, it is the tallest public building in Kentucky and was the tallest structure outside of Louisville from 1963 until a building in Lexington surpassed it in 1987.

Even from a distance, a structure this tall seems anomalous in a city this modest, and it is no less jarring when up close.  At the time of its construction, the utopic “towers in the park” paradigm espoused by influential architect Le Corbusier had taken hold of urban America; many city governments supported the construction of towering structures surrounded by a landscaped plaza, most notoriously as the large-scale public housing aftermath of urban renewal.  But here in Frankfort, the Capital Plaza Office Tower houses employees of the commonwealth’s government, ultimately dwarfing the classically inspired Statehouse with this austere verticality.  And, though the Capital Plaza Office Tower manages to eschew the criticism of “concentrating the poor” that has dogged most high-rise housing projects, it certainly is no better than Chicago’s now demolished Robert Taylor Homes at connecting with the surrounding landscape.  Both have been lifeless.  Walking the grounds of Capital Plaza confirms any further suspicions, and I took these photos during the noon lunch hour on a working weekday. 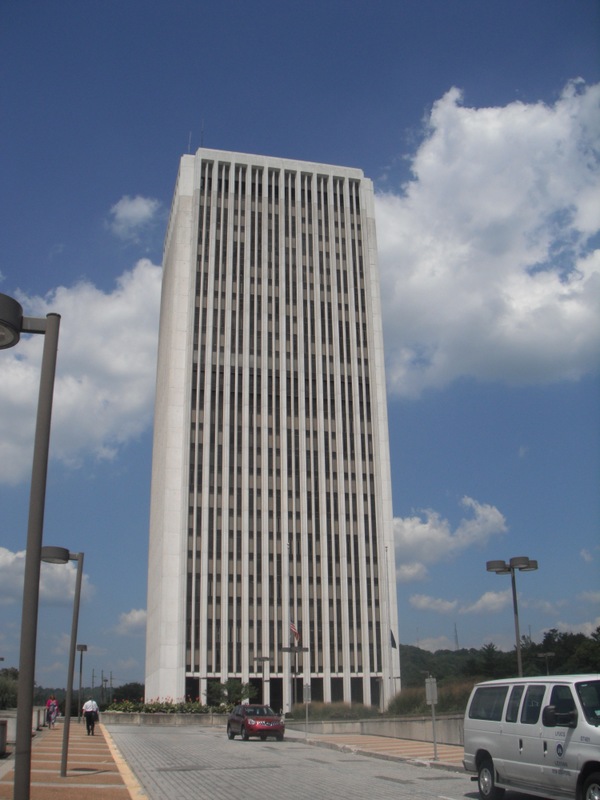 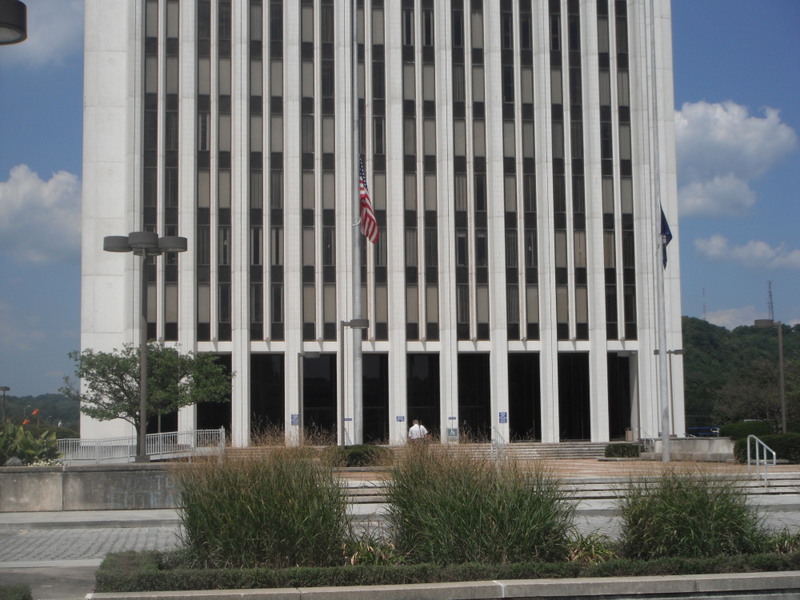 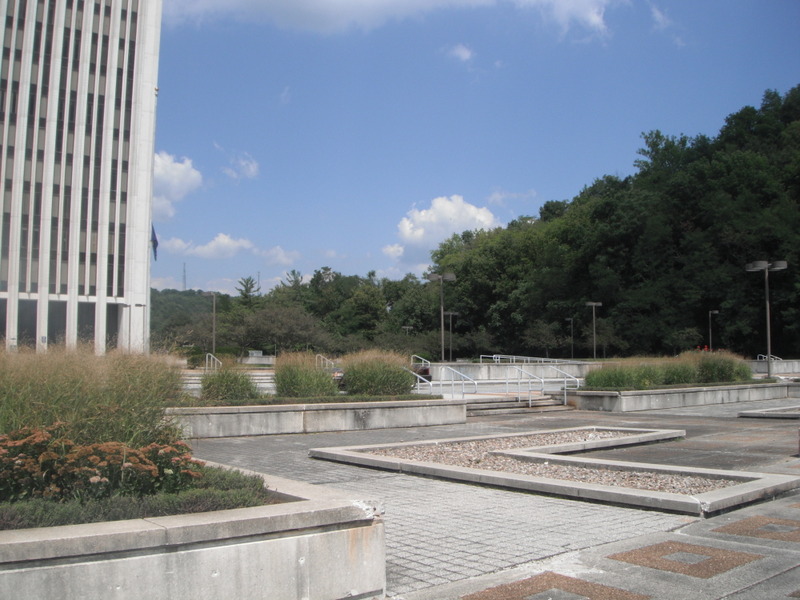 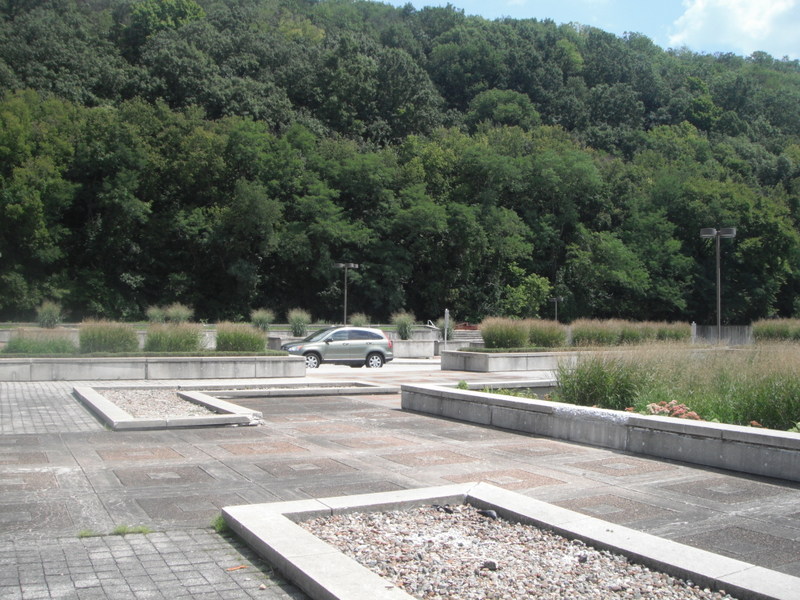 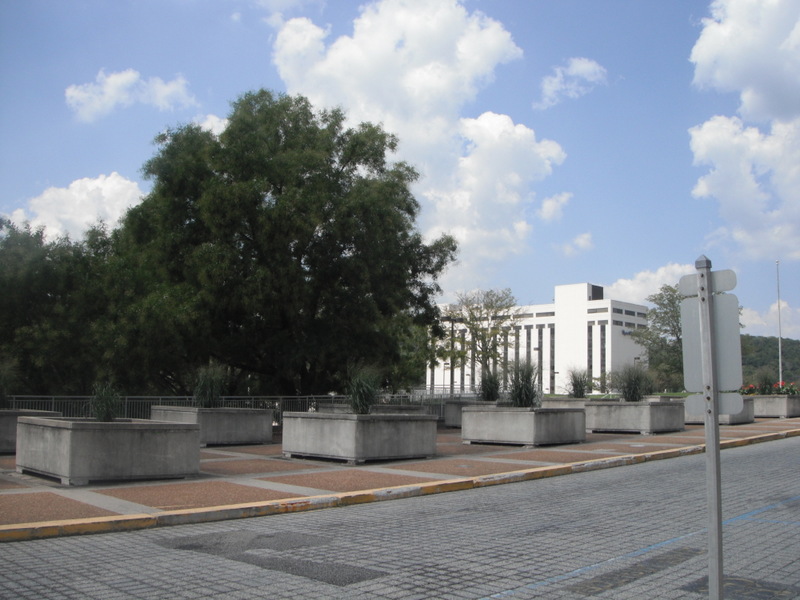 If you think it’s busy in these photos, you ought to see it on Sunday mornings.

From an organizational behavior standpoint, the Capital Plaza Office Tower is probably efficient: it concentrates a variety of loosely related government agencies and fosters easy interaction among them.  Commuters coming from homes in Louisville and Lexington can wend their way past the historic center of Frankfort into the underground parking of this tower and then hop right from the car to the elevator, in order to reach the floor they need.  At lunch they can partake in the building’s cafeteria—since it hosts so many people, dining options should be considerable.  Capital Plaza offers a fair amount of service-oriented shopping as well.  No need to leave the building.  The average commonwealth employee can thus navigate through a full week in Frankfort—or two, or three—without ever directly experiencing it.  From the perspective of civic leaders, that might be a good thing.  But it certainly doesn’t help to foster connectivity between government workers and the proprietors of downtown businesses.  Skyscrapers like Capital Plaza Office Tower may help concentrate people, but if the urban design doesn’t allow for an occasional “discharge” of economic activity in the world outside their four elongated walls, they might as well be standing in the middle of the Gobi Desert.

A much more recently constructed government building next door suggests that the architects and developers have learned a bit from those earlier mistakes…at least slightly. 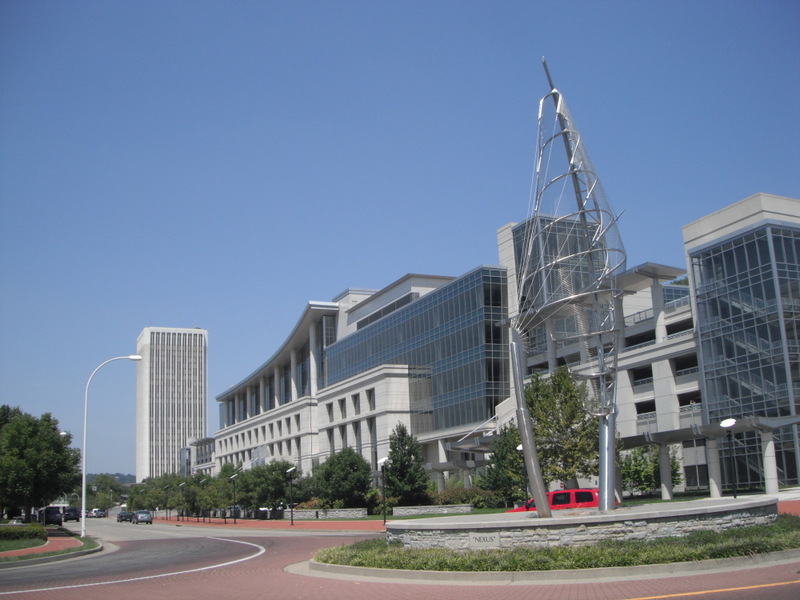 The Kentucky Transportation Cabinet may hulk over everything else except the neighboring tower, but at least the structure feels a bit more inviting.  Glass walls convey openness and hospitality, and building nearly hugs the lot line—no moribund parks and plazas surrounding it.  The few pockets of open space seem to encourage a certain level of association with the rest of Frankfort, even if it amounts to watching traffic pass by while sitting at a shaded table during lunch. 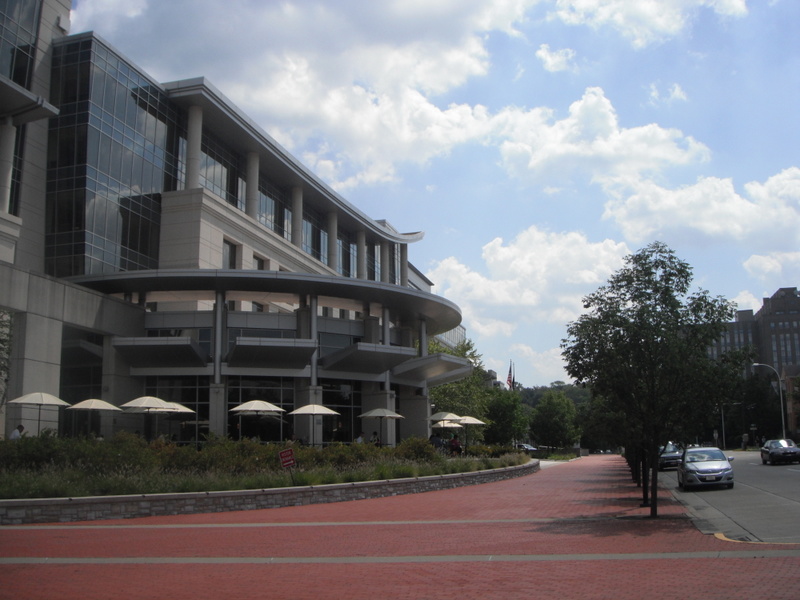 Nonetheless, the building dwarfs and presides over everything else, leaving little room for integration between the old and new.  It might not be as uninviting as the Capital Plaza Office Tower, but it sure seems out of scale for a community of this size.  The safe “corporatecture” and the absence of any real mixture of uses makes the Kentucky Transportation Cabinet building appear (at least to me) like a prototype for a convention center.  But no, Frankfort already has one of those, just across Mero Street from the other structures. 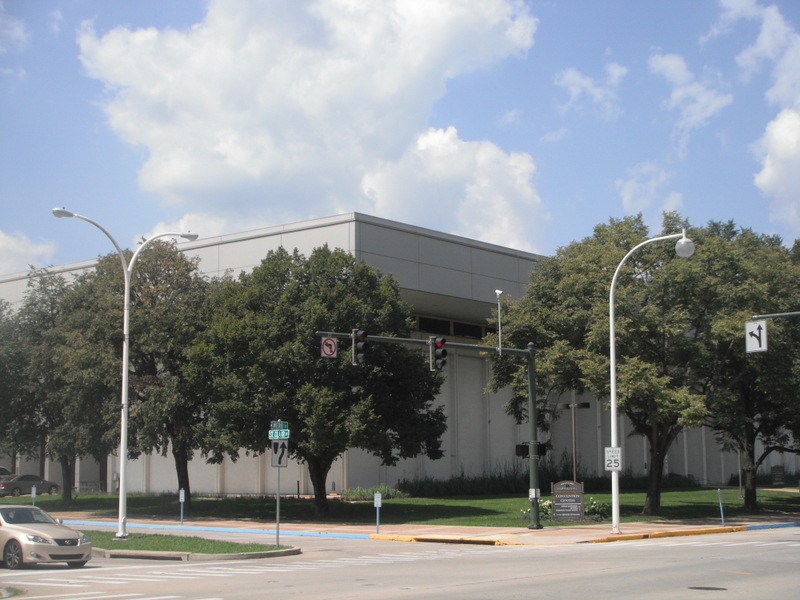 It’s as discouraging as just about every other windowless convention center from this time period, and it seems to be keeping with the notion I blogged about earlier, that convention centers seem speciously designed under the fallacious assumption that just bringing lots of people into a shared space is good enough to energize a downtown.  Wrong again.

Thus, poor Frankfort has three massive publicly funded structures within a stone’s throw from one another, placed on the other side of the tracks from downtown, thereby ensuring the relationship between the two as almost adversarial.  (Even the Statehouse is quite removed from everything else.)  Though my earlier Frankfort blog post acknowledged that architect consultants have recommended demolishing the Capital Tower, it doesn’t appear that the idea has gained much traction.  Aside from the taxpayer cost of demolishing a building that remains in good condition, the relocation possibilities raise a number of questions.  Where would these workers go?  Do the second floors of all those pretty downtown buildings have enough vacant space to hold everybody in the Tower?  Is it even a good idea to decentralize from an efficiency standpoint?

Thanks to the violent dichotomy between old central Frankfort’s handsome array of commercial buildings and the massive institutional structures nearby, Frankfort’s skyline is nothing if not weird. 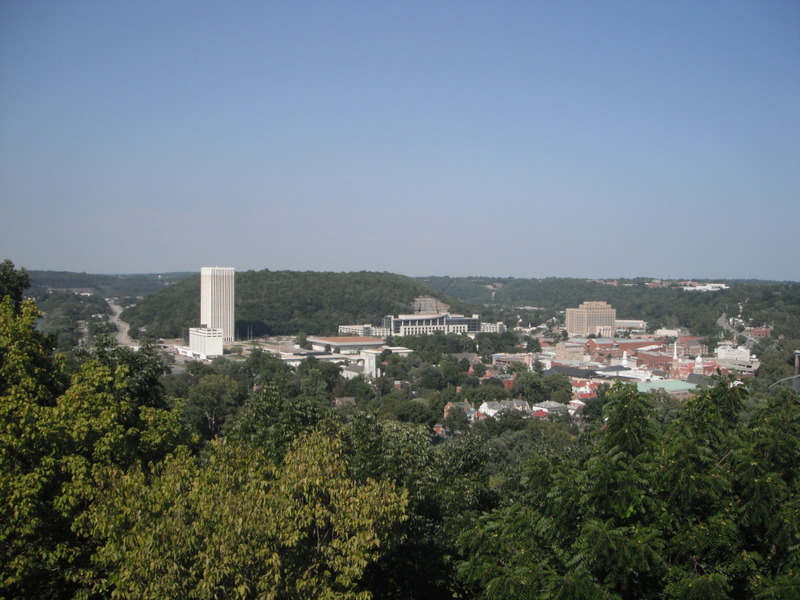 (The Kentucky State Capitol building would be just to the right of the photo, but the panorama function on my cheap camera doesn’t work so well.)  Unfortunately, none of the planners, architects and civic leaders have been able to elevate the city’s weirdness to something bigger than the individual parts; they have failed to mythologize it.  Perhaps these successive urban design misjudgments will forever relegate Frankfort to its humdrum status as a provincial capital that meets but never exceeds its potential.  But such an assertion makes implicit use of words like “always” and “never”; I’m not so fond of those.  Frankfort may someday ally with an ambitious leader who sees a creative and translatable opportunity amid the city’s disjointed parts.  However, with a track record for building itself out of the doldrums as poor as this one, it may be wise to keep architects, engineers, and designers in general as far as possible from an economic development team.

2 thoughts on “Barricading a downtown…forever.”