The emperor might have beautiful clothes, but what about the shoes?

By 21st century standards, it would seem like a moot point that buildings in high density downtowns would attempt to have at least some street level engagement, meaning that the ground floor offers something for passers-by to look at beyond a mere blank wall.  Usually this translates to a large window for a display that correlates to the activity inside, and since most people in big cities do not want their private lives to be a stage, residential uses on downtown ground floors are not typically very desirable.  However, most businesses—particularly retail—find it not only desirable but advantageous that pedestrians and motorists can easily peer into their establishments: the only thing better than a good window is an equally conspicuous door nearby.  Thus, many buildings that may otherwise house residences, offices, or even covered parking on the upper levels will still have a gregarious ground floor that establishes a dialogue with the street.  Sometimes the “foot” of the building is the most heavily ornamented, while all the other floors between the foundation and the cornice are a bit more austere or conventional.

A survey of any older downtown district confirms this phenomenon, such as the photo below from Roanoke, Virginia: 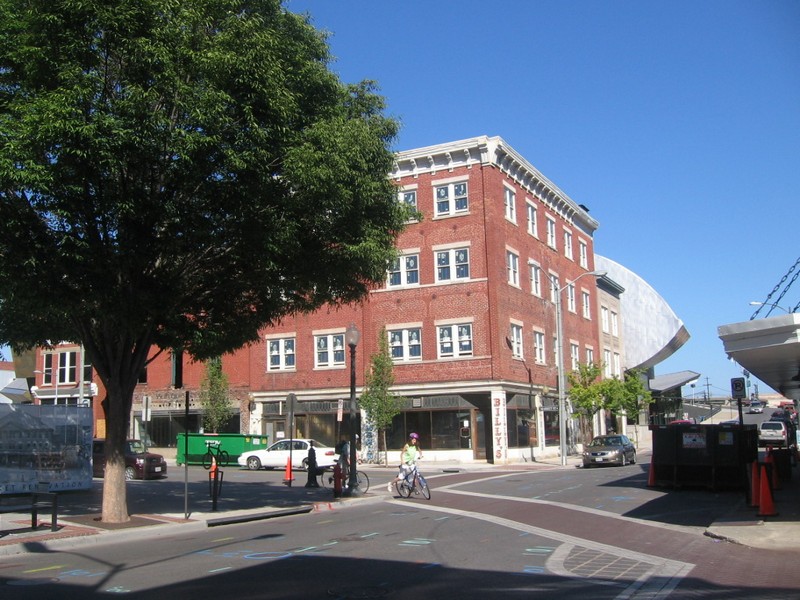 This perfectly conventional building from, most likely, the latter half of the 19th century was ubiquitous across American cities up until around 1960.  The dichotomy of large, retail-oriented windows on the ground floor and smaller, more private fenestration on each upper level was a standard building typology of that time.  No blank wall at the street level: pedestrians get something appealing to peer into, and a business can hawk its wares.

But it all changed concurrent with the decentralization of American cities after World War II.  Automobile ownership was already advancing rapidly beforehand, with the brief exception of the first few years of the Depression (and after 1933, vehicles per capita in the US resumed climbing, despite the persisting economic malaise).  After the surrender of Japan, American soldiers returned home to take advantage of the GI Bill and moved with their sweethearts to a brand-new house in what was probably farmland before they left to fight the Axis Powers.  Then, together, they commenced in an unprecedented babymaking celebration.  A surge in the economy, the population, the rate of homeownership, and private automobiles culminated in the emergence of a new way of life in which downtowns were increasingly less critical for daily routines.  By the time the overwhelming majority of households owned vehicles in the 1950s, old downtowns were not only passé, the physical form was downright inconvenient.  Floorspace in these old buildings wasn’t large enough for the logistical improvements that allowed for supermarkets.  Living above or in close proximity to work was unnecessary thanks to cars.  Small yards in the homes close to downtown put people unappealingly close to their neighbors.  Downtown streets could not begin to accommodate the level of parking available in a typical shopping mall, out around the cheaper land near all the new housing.

In the 1950s and 60s, urban retail didn’t just evolve in its physical form; the old typology almost completely collapsed.  The most outdated old buildings fell vacant and into disrepair; city leaders often demolished them to offer better parking opportunities in an attempt to bolster downtowns’ accessibility.  New structures often needed so much parking that it had to be stacked on the first few stories, below the office uses.  And since downtown parking demand outpaced the need for these surviving urban structures to offer goods and services, the newest generation of buildings turned away from the streets, reducing or eliminating visible displays or entrances.  Quite a few downtown buildings in the mid 20th century oriented themselves toward a parking garage, built to one side, connected to another block by a skyway, or perhaps underground.  Meanwhile the street and sidewalk merely hosted service vehicle access or fire escapes, but no primary entrance.  Instead, these building façades greeted visitors with a blank wall.

For many readers of this blog, a description of the cataclysmic shift in urban design over fifty years is unwarranted, but even for the unacquainted, it doesn’t take much to get the idea across.  I could provide dozens examples of civic buildings, office towers, parking garages, or even shopping centers that flout this disregard for city streets and sidewalks, but a particular structure comes to mind for its critical place within its city’s landscape. 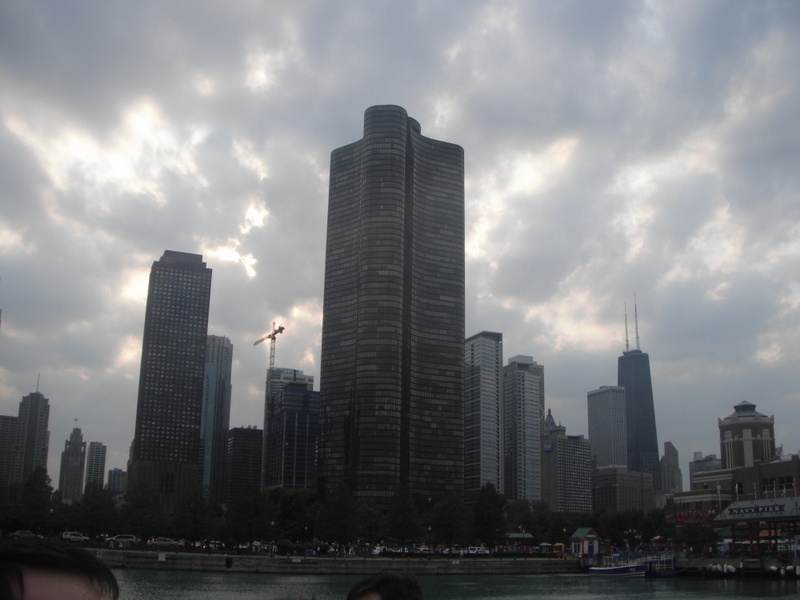 Lake Point Tower in Chicago, viewed from the lake in the center of the above photo, is among the city’s most iconic buildings: at the time of its development, the 70-story structure was the tallest residential tower in the world.  To this day, it remains the only Chicago high-rise that sits to the east of Lake Shore Drive, on a promontory that also includes the city’s famed tourist attraction, Navy Pier, visible in the lower right corner.  It bears a more than passing resemblance to the Spartan elegance associated with Chicago’s favorite (adopted) architect son, Ludwig Mies van der Rohe, whose Second Chicago School of thought during his tenure at the Illinois Institute of Technology exerted a profound influence on the cityscape during middle of the 20th Century.  The similarities between Lake Point Tower and the work of Mies should come as no surprise; its architects were among his students.  Different vantage points reinforce the distinctive status of this edifice in relation to the waterfront and neighboring high-rises. 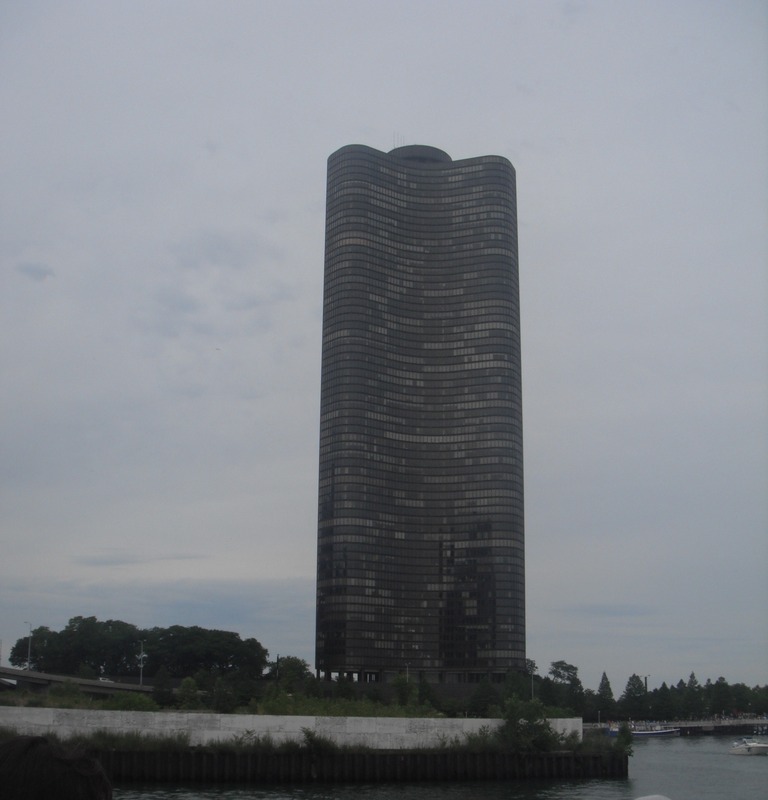 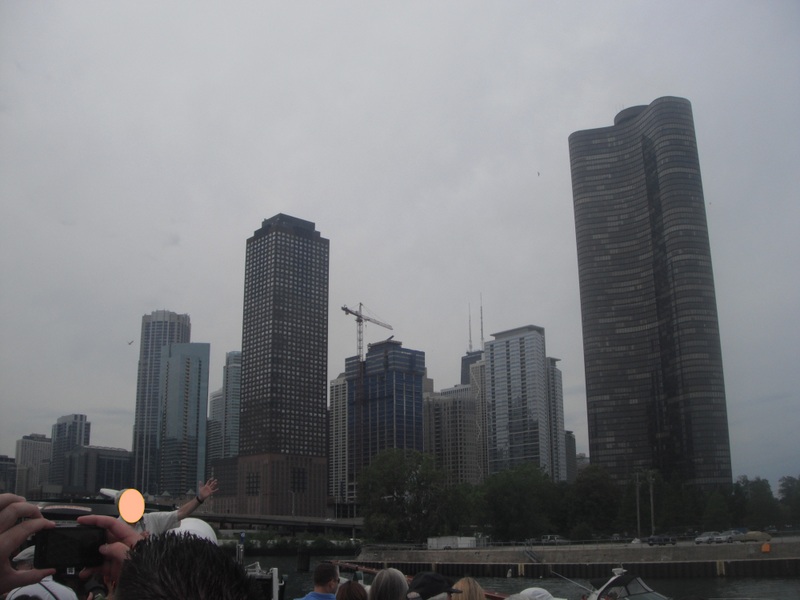 The structure borrows heavily from Mies’ Bauhaus movement origins, which deliberately sought to avoid engagement with the landscape or local vernacular in an attempt (at least to some degree) to transcend it; thus it earned the uncomfortable nickname “International Style”.  Though the style fell out of favor in the last quarter of the 20th century for exuding more than a whiff of elitism, the disassociation with place and regional culture certainly gives Lake Point Tower a majesty that underlies the luxury of the residential units inside.  And if it seems regal now, one can only imagine what it looked like when first constructed 45 years ago.  In 1968, it felt even more like an island: Chicago’s central business district was declining, as was the case across the country.  While the city’s above-average public transit system precluded the need for as many parking lots and garages as most Midwestern cities, much of the central city struggled to retain offices and shops, let alone residences.  Lake Point Tower was a risky enterprise—a relative orphan in the Streeterville neighborhood, capitalizing on remarkable multi-directional views of both the Loop and the skyline.  After the residential boom that began in Streeterville and other parts of Chicago’s CBD in the 1980s, Lake Point Tower stopped seeming so lonely.  But the evidence remains powerful of the time period in which it was conceived.  While it often looks fantastic from the water or zipping by on Lake Shore Drive to its west, the other, more pedestrian scaled access roads paint a different picture: 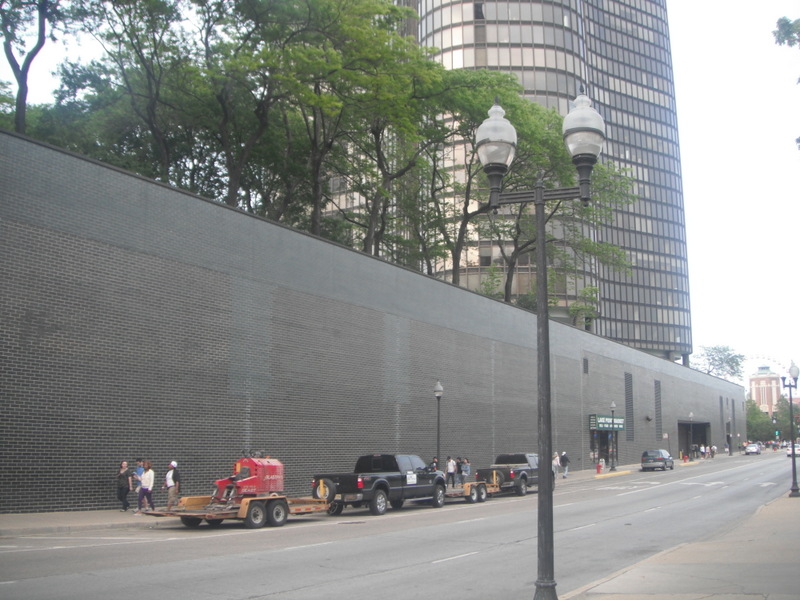 Nothing but a big blank wall across most of the Illinois Street frontage, with the exception of a tiny convenience-type retail opening at the green awning.  The Grand Avenue frontage on the north side of the tower is much the same way: virtually no engagement with the street.  Mostly a blank wall.  Pedestrians have virtually nothing to look at as they walk by, which might not be such a concern if it were a particularly sleepy or attractionless part of town.  But it isn’t.  Throngs gather at Navy Pier just a block to the east, particularly when the weather is nice. 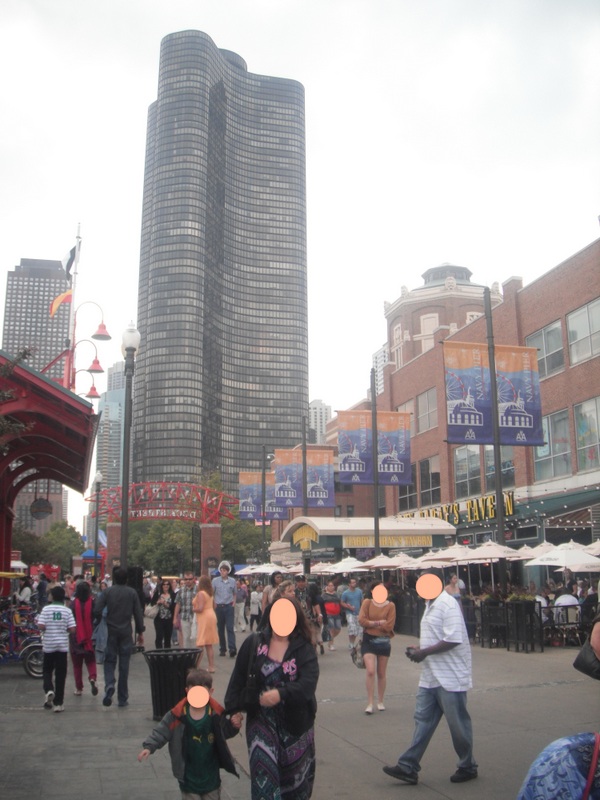 Thus, the designers of Lake Point Tower missed out on a critical opportunity to divert the attention of passers-by.  Pedestrians in the area, many of which are tourists, would easily have patronized shops and restaurants along Illinois Street or Grand Avenue, so it perfectly embodies a failure to capitalize on the commercial possibilities afforded by this premier urban location.

In the tower’s defense, it is a product of its time.  The architects did not take the designs of pre-war commercial buildings to heart, because in 1968, they were by and large irrelevant.  Lake Point Tower was an investment risk when central cities across the nation hemorrhaged jobs, burned-out swathes reminded everyone of escalating social unrest, and both petty and crime increasingly dominated the news headlines.  Downtown Chicago had plenty of high-rises in 1968, but it could not boast a great number of residential high-rises.  Many people living downtown back then were looking for ways out.  Thus, this tower responded to the social climate by turning inward.  It still offers the luxuries its target demographic would expect—a pool, park, playground, shops and restaurants—but they first (and sometimes exclusively) serve the residents under the shared roof.  Dwellers of this tower could function for days without leaving the building’s grounds; an elevator would be all they need. The gourmet restaurants might attract outsiders in order to break even, but they cannot rely on display windows for promotion, and the outside world that chooses to patronize them will probably get there by car.

Lake Point Tower is hardly unworthy of its pivotal role along the Chicago lakefront, as well as its many firsts.  But from an urban design standpoint, its imperfections create what almost amounts to blight on the streetscape.  It may still be luxurious, but it did not place among the top 10 priciest condo buildings last year, and as Streeterville and Near North neighborhoods have invited dozens of other luxury high-rise condo, apartment and hotel developments in the ensuing decades since 1968, most subsequent towers have consciously engaged with the street and sidewalk, as evidenced by the photo below: 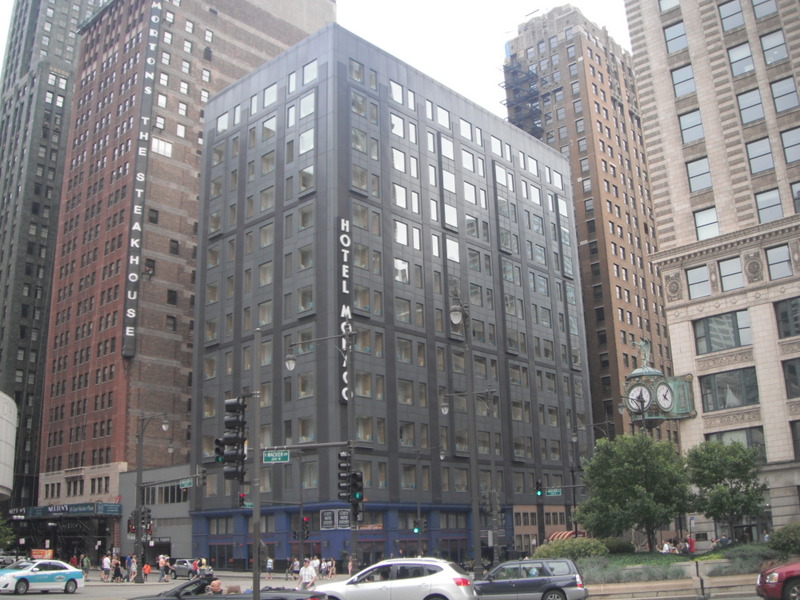 Developers have nothing to gain by pasting a blank wall across the ground floor of their buildings, and these days, most new construction recognizes this, even in downtowns with less of an active street life than Chicago.  Many cities remain too decentralized to warrant a store-lined first floor on every downtown street—after all, the suburbs remain the retail hub for most of metropolitan America, despite some recentralizing activity in the last twenty years.  However, most architects, developers, and city planners know better than allow a blank wall to permeate new construction; a superficial window display with public art or an advertisement still offers a vast improvement.  Lake Point Tower will probably remain a Chicago icon for decades to come, but its admirers will reserve their kindest words when describing it—and viewing it—from a distance.

PrevPeeling back the turf to expose the polders.
Gateway to navigational confusion.Next

One thought on “The emperor might have beautiful clothes, but what about the shoes?”