Not all interstate highways are perpetuated equal.

While transportation infrastructure has long elicited a highly politicized debate in the US, particularly in regards to government funding of alternative methods (Amtrak and rail, supporting the persistently ailing airline industry), only in recent years have the discussions migrated more heavily toward inadequacies in road and highway infrastructure.  The collapse of the Interstate 35W bridge in Minneapolis in August of 2007 helped stimulate the Federal Highway Administration to probe into the quality, level of maintenance and fundamental stability of some of the nation’s most heavily traveled bridges, while it prompted the Minnesota Department of Transportation to increase the state fuel tax mildly to fund bridge maintenance appropriately.

Five years later, the debate on the adequacy of transportation infrastructure funding persists: the most comprehensive current authorization of funds is the Safe, Accountable, Flexible, Efficient Transportation Equity Act: A Legacy for Users, better known by its acronym SAFETEA-LU.  First signed by President Bush in 2005, it expired in September 2009, but Congress has extended it more than a half-dozen times since then.  The latest (ninth) extension expired today (June 30, or yesterday, depending on when this blog makes it to post), and while Congress had long aimed to pass a final reauthorization bill, it seemed more likely, in this heavily fractious political climate, that it would simply settle for one or two more extensions until the November elections.   However, to many people’s surprise, President Obama was able to sign into law a bill that at least for the next week (until July 6) assured that no interruption to federal highway funding would take place.  It now appears most likely that a new bill will emerge in the next week, rather than yet another short-term extension.  For most Americans, none of this is particularly earth shattering news: only institutions with strong ties to lobbying are likely to follow the development of this bill on a day-to-day basis.  My suspicion, in fact, is that over 90% of Americans would not know what SAFETEA-LU is.  Does this seem strange, given our overwhelming dependence on the interstate highway system for traversing this mammoth country?

It may be premature for me to accuse Americans of prevailing complacency in this matter, but obviously there is a far greater confidence that the legislature always will do something about this, and the impact of that decision is not going to cause widespread polarization among the constituents.  Compare the passage of this bill to the results of the Supreme Court decision on the Affordable Care Act: everyone has been glued to their TVs!  The “complacent” label may seem snide, but it was certainly a word Minnesotans heard a fair amount in the summer of 2007, and it wasn’t targeted at residents of that state: negligence and indifference toward infrastructural needs was a nationwide problem back then, and it remains so today.  After MnDOT devised alternative transportation routes during the reasonably fast paced (13 month) reconstruction of the I-35W bridge, did we resume our blithe disregard?  Was the loss of 13 lives during that collapse simply not significant enough to confront the problem the same way we have confronted the funding of health care?

Looking across the recent improvements in our highway system, it’s hard to conclude that highway improvements in the Federal Interstate Highway System operate under a consistent authority—most likely because they don’t.  I-65 as it runs through Kentucky offers an excellent example. 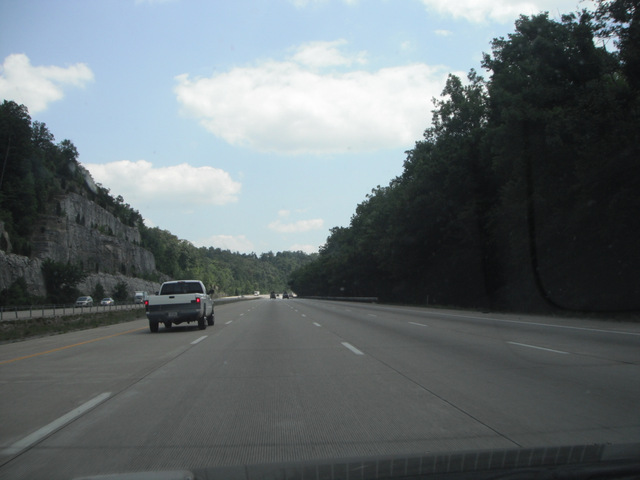 As the image above indicates, this stretch of the 887-mile highway weaves between Kentucky’s undulating hills and limestone beds.  Just a few miles later further south, the landscape is virtually unchanged. 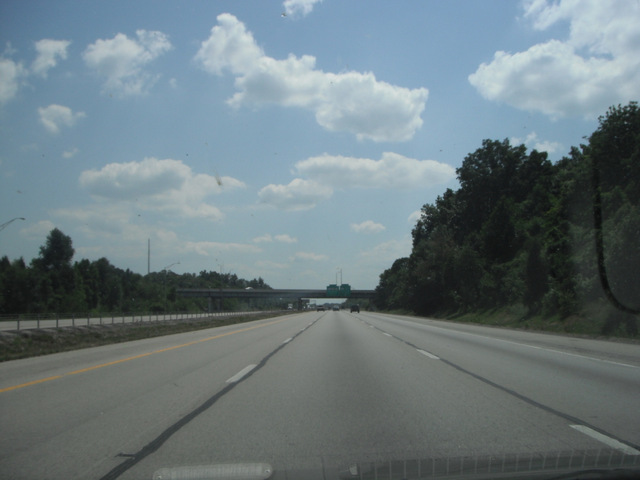 Perhaps a little flatter, but not much different than before.   This is how most of I-65 in Kentucky looks: with few exceptions, the interstate passes through overwhelmingly rural countryside.  Kentucky in general is not a terribly urban state: only one metro, Louisville/Jefferson County, ranks in the nation’s Top 50 for size, and only four cities (Louisville, Lexington, Bowling Green, Owensboro) claim populations over 50,000.  The state ranks 22nd in population density, but at 110 persons per square mile, it is less than a tenth as densely populated as some of the crowded northeastern states such as New Jersey and Rhode Island.  While traffic volumes for I-65 through Louisville are undoubtedly high at peak hours, the only two other communities of reasonable size (populations over 15,000) with exits along the I-65 stretch of Kentucky are Elizabethtown and Bowling Green.  These are the only communities outside of metro Louisville along the interstate that offer a choice of services (gas, food, lodging) beyond the bare minimum—quite a few of the already sporadic exits along I-65 offer nothing at all.

In short, Kentucky is not a particularly crowded state.  But most of its share of I-65 would suggest otherwise, at least as highway improvements are concerned.  Through much of the Midwest and South, six lanes is reserved for more urbanized areas.  The only portions of I-65 in Indiana (a state with nearly double Kentucky’s population density) that are more than four lanes are the Indianapolis metro, NE Indiana around Gary and Merrillville, and the Louisville suburbs in southern Indiana.  Ohio, the tenth most densely populated state in the country, also claims huge stretches of rural interstate highways that are only four lanes wide.  But in recent years, Kentucky’s DOT has overseen the widening of nearly all of I-65, with the exception of a 43-mile segment south of Elizabethtown and north of Bowling Green, and the Governor articulates proposals for an upgrade there during the FY 2012 – FY 2018 Highway Plan.  Before long, all of I-65 in Kentucky will be at least six lanes wide.

Another noticeable feature is the superior lighting of I-65 in Kentucky across its exits. 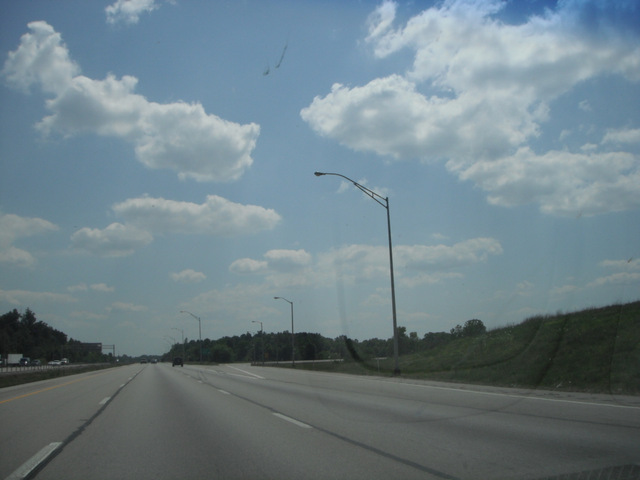 Streetlights are numerous at the exit ramps, even if the intersecting street does not host a great deal of services or traffic.  In Indiana and Ohio, only the busiest of rural intersections get streetlights, and their number often depends on the traffic volumes: those with a variety of hotels and restaurants may have a dozen streetlights, those with only one or two gas stations may have a half dozen or less, and those that are the most rural will have none.  Conversely, in Kentucky, virtually every interchange on I-65 is now fully saturated with lights—urban or rural, and most are still resolutely rural.  These indisputable highway improvements fundamentally urbanize the highway conditions in what remains an overwhelmingly rural state.

When passing near Bowling Green, where the exits are often quite a bit busier, the streetlights are even more numerous. 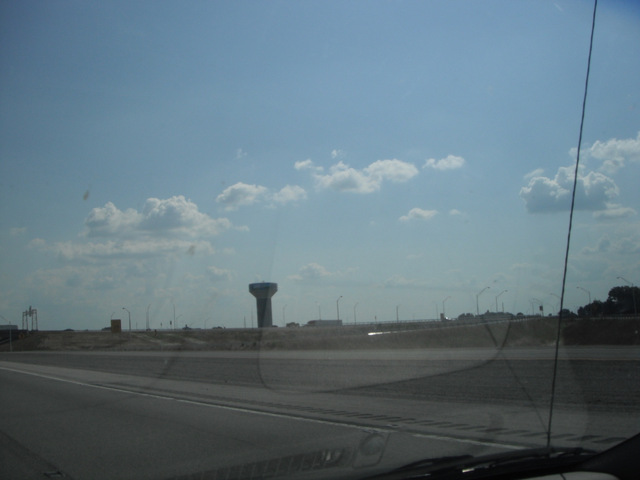 Bowling Green is a moderately sized city of approximately 58,000 inhabitants.  Cities of such a size in either Ohio or Indiana are numerous, but in Kentucky, Bowling Green is the third largest city.  And between its three primary exits off of I-65, the segments of interstate remain consistently well-lit: 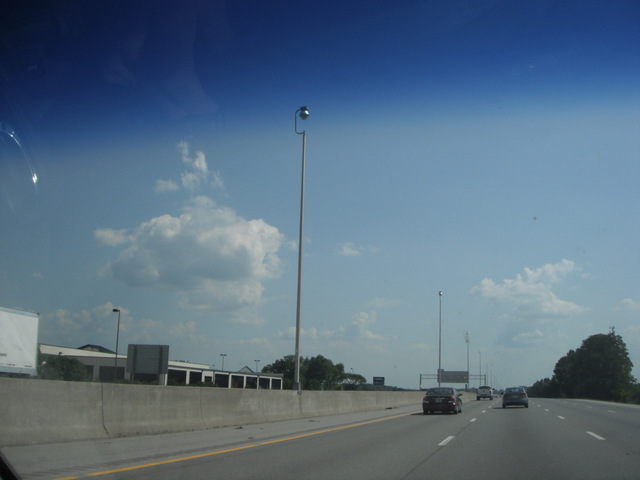 This stretch of highway deploys of stanchions in the median of the interstate, planted firmly in the Jersey barriers at short intervals.  Usually only larger metros of over 250,000 would integrate such a lighting technique, and exclusively when the interstate passes directly through the most urbanized area.  I-65 circumscribes the exurbs of Bowling Green, yet motorists still get some big-city lighting.  Indiana’s comparably sized cities—Anderson, Lafayette, Terre Haute, Muncie—only get lighting at the major exits.  Granted, the respective interstate does not pass directly through the hearts of those cities either, but the lighting is nowhere near as sophisticated.  Ohio shares the same condition as Indiana, with many lightly traveled interchanges remaining completely unlit.  Thus, Kentucky, despite being a significantly less densely populated state, has invested in highway improvements at a level that far surpasses that of its more urbanized neighbors to the north.  I have no doubt that I-65 through Kentucky receives a number of travelers passing through on this very important corridor that connects Chicago to the Gulf of Mexico.  But the fact remains that Indiana and Ohio also can claim significant trucking traffic in addition to their much larger population bases.  Both Indiana and Ohio, because of their proximity to other large cities inside and outside of the two states, have accommodated a significant ground logistical industry, suggesting that, in aggregate, their interstate highway segments will remain much busier than Kentucky’s for the foreseeable future, however well-used it may be.

This comparative observation by no means intends to criticize the Commonwealth of Kentucky’s transportation spending decisions, nor those of Indiana and Ohio.  It simply demonstrates the visible differences in states’ priorities.  Kentucky’s Highway Plan includes the proposal for spending Road Fund revenues appropriated in each new two-year period, which includes state and federal gasoline tax revenues.  This has proven a highly volatile source during the serious recession, due to reduced fuel consumption and purchase of vehicles.  The Federal Highway Trust Fund has been particularly unstable, not only because of reduced consumer spending but because Congress has not agreed on a suitable alternative to SAFETEA-LU since it expired; the series of resolution/extensions disburse about 20% fewer funds than before the act’s 2009 expiration.

Even if many fundamentals of a limited access highway (design, safety parameters) remain more or less the same from state to state, the “embellishments” will inevitably vary tremendously.  At least for now, Kentucky has some of the most luxurious interstates in terms of lane widths and lighting, particularly in relation to the fact that so much of the state is sparsely populated.  By contrast, signage is less developed in Kentucky than in other states: few—perhaps none—of the overpasses in Kentucky have any indicator of what the name of the road is, whereas in Indiana, most overpasses do.  And in Alabama, virtually every street has a particularly handsome sign: 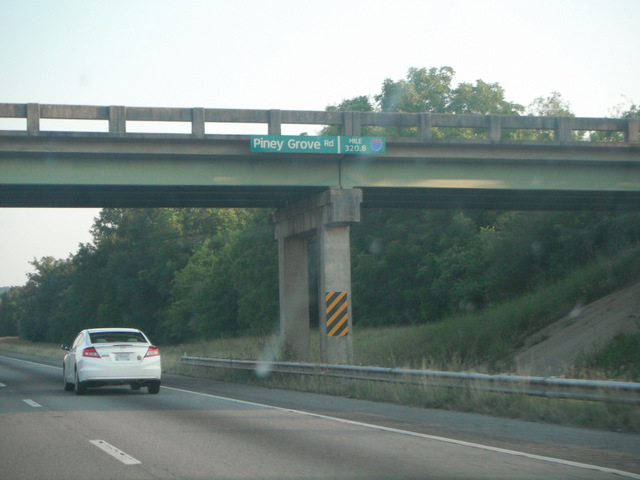 These signs are relatively recently funded—probably simultaneous with the highway widening in Kentucky—and they closely approximate the Clearview font approved by the FHWA to phase out the older, splotchier Highway Gothic.  So Alabama’s highway improvements pertain almost entirely to signage.  Notice this example here, with the new font on the overpass and the old one to the right of the road: 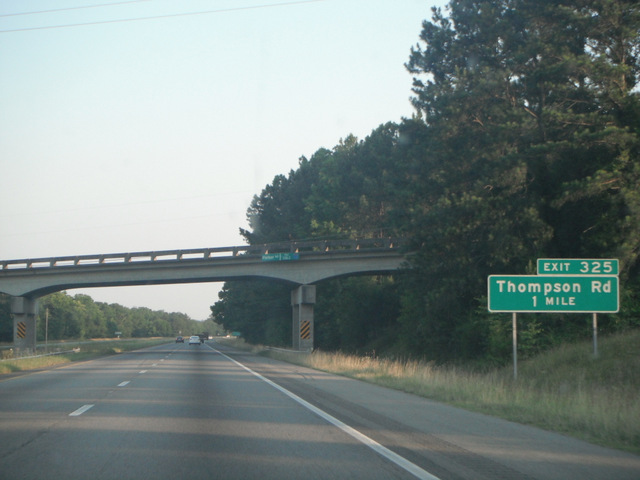 Alabama has the slickest signs I have seen among my own recent road trips.  And at this point, Kentucky interstate driving is about as comfy as you can get: roads as wide as you expect to see in Connecticut, but with a fraction of the population density.   Meanwhile, Ohio and the Mid Atlantic states have invested much more heavily in protective fencing to prevent injury when motorists on the overpass might throw objects out the car so that they could hit people below.  Ohio has these fences on almost all overpasses; Indiana, Alabama, and Tennessee have them on just a few; Kentucky has none.  So these highway improvements are very state-specific and align with each state’s priorities regarding safety and navigability.  Will we ever see a consistency among the states in all of the various infrastructural amenities?  I’m not holding my breath, and while I hate to end on a cynical note, it is clear that some states are devoting greater amounts of money to bridge maintenance than others—time will only tell where, amidst a decentralized transportation funding system, the next Minneapolis will take place.

PrevEconomizing and downsizing a city’s landmarks.
Peeling back the turf to expose the polders.Next

2 thoughts on “Not all interstate highways are perpetuated equal.”