Enticing visitors downtown…and then incarcerating them.

As much as street-level engagement for large projects in city centers should, by this point, seem like a foregone conclusion, it continues to amaze how many big ticket items—in cities of widely varying size—either engage in terpsichorean negotiations around it or neglect it completely.  When developers confront a zoning ordinance or design guideline that insists on activating the sidewalks with retail, commercial, residential, or offices, they might challenge the requirement through a number of arguments: the development itself is too small, the street is not prominent enough, the economy for retail is particularly soft.  If the public-sector approving agency for the development fears that the proposal will collapse without kowtowing to the developer’s demands, chances are likely it will pass, therefore lacking that street-level engagement otherwise mandated by code.

But what about when it is a big-ticket item, partly or even completely funded by public dollars?  A case in point is the Greater Columbus Convention Center in the capital city of Ohio: 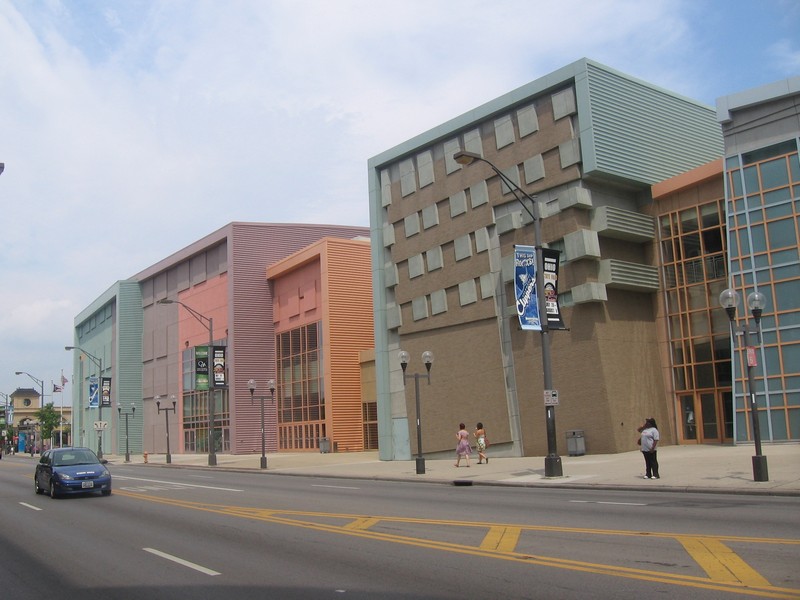 Constructed by Peter Eisenmann in 1993 and expanded six years later, the façade details arouse widely varying reactions, judging from opinions on consumer rating sites.  Many think it’s faded and ugly; others respect its idiosyncrasy.  While the Easter egg color palette obviously evokes the time period of construction, I don’t usually like to criticize particularly time-sensitive architectural gestures, since it is inevitable that the appeal of a stylistically distinct building will wax and wane on the general cultural radar.  If this convention center seems outmoded now, it’s only a matter of time before the taste cultures shift and it falls squarely into retro 1990s chic.

The problem here is the programming of the building within these walls.  Why so much blankness?  Why so few windows?  Couldn’t the urban design have allowed passers-by to engage with it by providing something to do, let alone something to see?  The criticism here would be more of a stretch if the convention center sat in a forlorn and otherwise overlooked corner of downtown Columbus.  But it doesn’t.  The photo above depicts frontage on North High Street, the most vibrant commercial corridor in the entire metro.  The convention center links the fashionable Short North, an array of mostly locally owned establishments along High Street that connect The Ohio State University campus to downtown; this stretch of the artery represents the southern end of the Short North, right before it continues southward into the central business district of the city.  In other words, it should be bustling, but this side of the street really isn’t.  And the other? 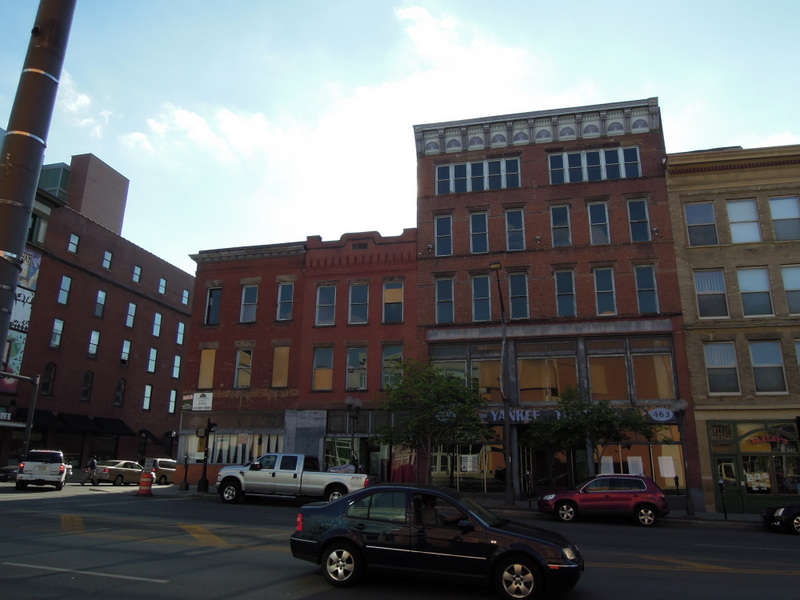 The photo above (taken by Jung Won Kim) reveal that not only does this convention center façade extend in much the same fashion for several blocks, but the other side of the street, featuring an array of historic commercial buildings alternating with smartly integrated infill, is among the deadest on the entire stretch of North High Street.  I hope to replace this Google Street View with some actual footage over the next couple weeks that will better demonstrate this distinction.  While most of High Street to the north of the convention center ranks among the most desirable commercial and retail real estate in the region, this section has struggled to secure very many stable tenants over the years.  It’s not completely desolate, but certainly not surging: a visit last December revealed that it was actually a bit blighted, which would be unheard of just three blocks north.  The forthcoming completion of a new Hilton in the parcel immediately south of this cluster of commercial buildings (and therefore west-southwest of the Convention Center) may help stimulate some pedestrian traffic.  Here’s a view of the nearly finished Hilton looking northward, with the aforementioned block of commercial buildings in the distance.  Directly across from this is the Convention Center. 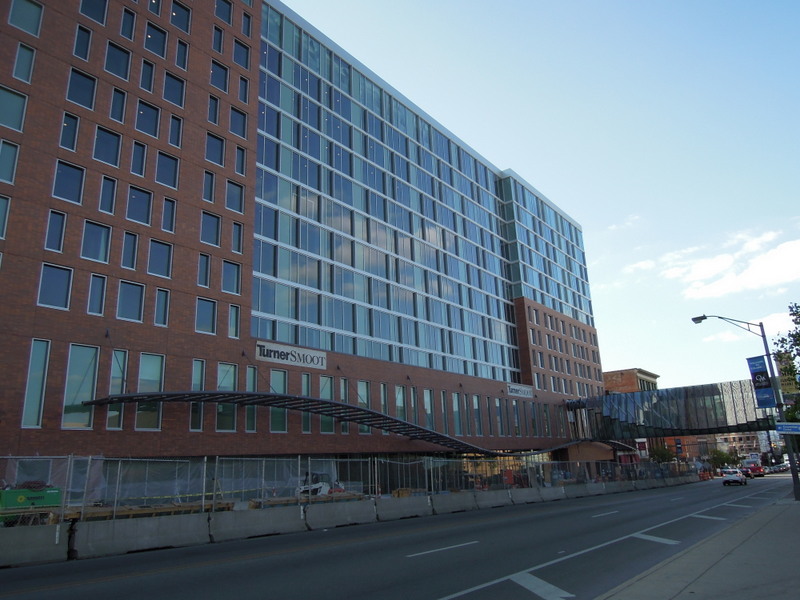 And here’s a view of the Hilton looking southward.  Directly to the right of the photo is the underinvested block in question. Both photos are again courtesy of Jung Won Kim. 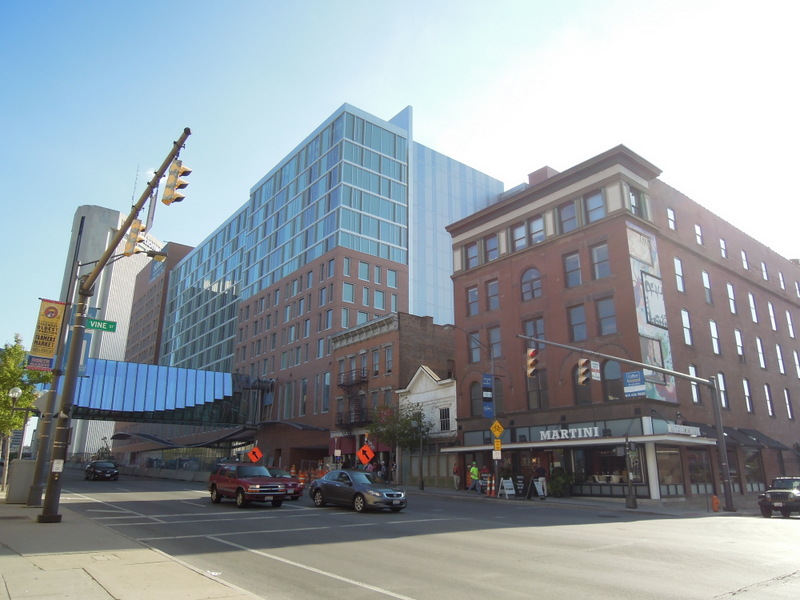 Thanks to the presence of both the Convention Center and the hotel, short-term visitors from out of town will dominate this block of High Street.  Unfortunately, tourists staying in hotels are not historically huge supporters of the local establishments that boosters of Short North aim to recruit.  However, given this segment’s recurrent struggles, if these storefronts eventually attract Starbucks, Noodles and Company, Chipotle, or even something surprising like Payless Shoes, it would be a welcome, stable improvement over the limbo that these old buildings have suffered for far too long.

Meanwhile, the Short North portion of High Street, particularly north of Goodale Street just blocks away, bustles—at least by the standards of a Midwest city of Columbus’ size and density: 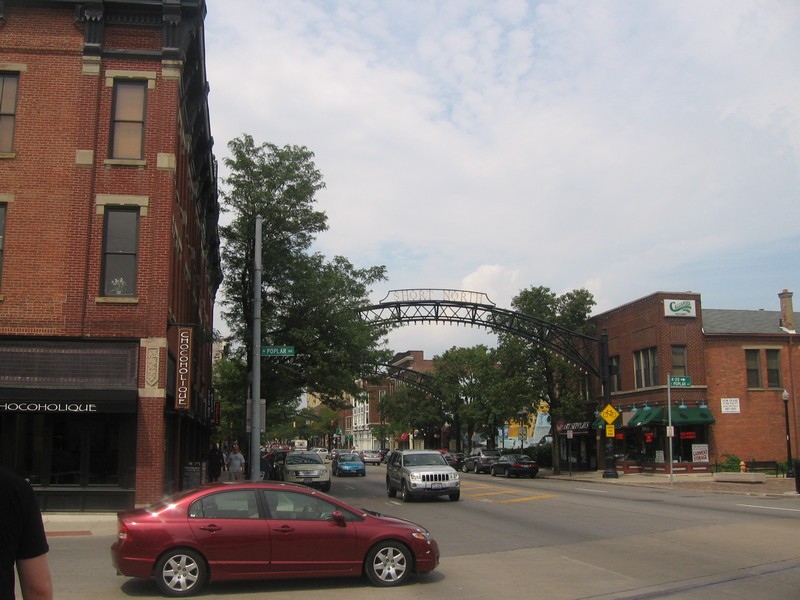 Plenty of shops, plenty of cars, and (particularly during the school year) lots of pedestrians.  The conditions here beggar the question: why design the Convention Center in such a cold, alienating fashion?  By almost every estimate, it was a shrewd location: when stepping out these doors, a convention-goer is blocks from the Statehouse and the heart of downtown to the left, and visually linked to the best of Columbus’ university-driven nightlife to the right.  While I strongly suspect that some historic building stock (of similar appearance to the buildings across the street) met the wrecking ball in order to clear the room for the hulking Convention Center, the idea of a mega-attraction might at the time have seemed like a stimulus for an area that suffered huge disinvestment up until urban living evolved into an overt 1990s fashion statement.

But structures like Greater Columbus Convention Center pervade across the country: arenas, stadia, performance halls, or convention centers.  We continue to build most of them this way.  When they are “in session”—when an event is taking place within their doors—they attract a higher density of people at one time than all but the most successful museums, malls, or urban mixed-use districts (i.e. Short North).  But most of them are only active for a fraction of the week, and regardless of whether the interiors are buzzing or quiet, the exteriors of these hermetic, self-referential monoliths offer little to attract the outside world.  Their visual contribution to the surrounding urban environs involve little more than blank walls.

I would never question the economic development benefits of these attractions for their respective downtowns; aside from revenue generated in both property taxes and direct consumer spending, they bring throngs of people to one place for a limited time—something most downtowns for the past fifty years could never otherwise achieve.  But the design of these structures all too often seems to treat this as a virtue in and of itself—not a means to something even better through a symbiotic relation with the often much more pedestrian-scaled context.  With convention centers and arenas, the multiplier effect is a foregone conclusion.  But where’s the spinoff activity going on North High Street in Columbus?

The biggest offenders in this case are, incidentally, the ones closest to downtowns—the airplane hangars that displaced an assortment of smaller, aging, potentially obsolescent buildings that housed smaller-scale commerce quite easily, back when technological limitations mandated that four-story structures remain the status quo.  Long the Mother of them All, Chicago’s McCormick Place convention center is a minimal offender, since Lake Shore Drive separates it from most of the urban fabric—in this case, the near-southside neighborhood of Chinatown—obviating the destruction of many (or any) historic buildings.  At the same time, virtually no other city has perceived of Chicago’s convention center as a model of site selection, because its non-intrusive location along Lake Michigan, far from the Loop, also failed to link the throngs of visitors to the central business district.

Thus, we instead have witnessed an escalating tendency to push these hulks right into the heart of the city, with practically no other street-level storefronts, offices, or visual stimuli.  I pointed out the inclusion of a new arena in Evansville a few years ago that sacrificed a full block of century-old buildings.  While I’m certain there are others, the only exception to this that comes easily to mind is in Indianapolis’ Bankers Life Fieldhouse, which has one small storefront at its northwest corner, visible on Google Street View.  (It hosted a Starbucks at the time of the Google photos; today it is a Dunkin Donuts.)  But arenas and stadia are not the most egregious urban design offenders: to some extent, their absence of retail storefronts is justifiable because of their erratic levels of activity.  Either they pull out all the stops to host an event, or they are completely empty.  Rarely do those key events take place during conventional business hours, the time when most retailers prefer to operate, so they are not a reliable generator of activity, even if they typically lure sell-out crowds.  It’s a bit surprising that even a Starbucks or Dunkin Donuts would prefer to locate in an arena, despite the fact that essentially in the heart of Indy’s downtown.

Regardless of the weaknesses of major sporting or performance venues, the convention center still wins the urban underachiever award.  The configuration of most centers can accommodate multiple events simultaneously, and these events normally take place during the heart of the business day.  But the designs of the buildings practically never attempt any engagement with the surrounding downtown.  In fact, they do the exact opposite: most of them contain interior eateries, some have their own souvenir shops, and (particularly in the cold climates) a network of skyways connects them to adjacent hotels and parking garages.  An out-of-town convention-goer could spend three days in the host city without ever stepping foot on a downtown street or sidewalk.  But the biggest embarrassment? Public monies fund most or all of these developments!  The convention and tourism bureaus often spearhead the construction or expansion initiatives, and yet by commissioning designs that sequester the buildings from their surroundings, they are squandering many of their own efforts to get people to spend their money downtown—all at taxpayers’ expense.  I can conjure mental images of several downtown convention centers—Indianapolis, New Orleans, Baton Rouge, Jackson, MS, Philadelphia—only the last one offers any exterior storefronts, and that contribution is only a twentieth (at best) of the overall frontage.  The others offer occasional windows to break up the blank walls—just like Columbus.

Nothing this article explores is novel within the world of urban design, but it warrants extra consideration because, even as many cities are catching on to strong street-level engagement with other publicly funded ventures, they continue to get convention centers wrong.  Civic leaders across the country learned a lesson from the relative isolation of Chicago’s McCormick Place, but it’s the wrong lesson.  Rather than taking a cue that its isolated position estranged it from the hotels and the attractions of downtown Chicago, other cities have imitated its hulking architecture while displacing the buildings that originally helped a central business district become a locus of all kinds of activity.  Columbus still boasts a fantastic asset in the Short North district that extends for well over a mile across North High Street, but it is just a few blocks less of an asset than it could have been, thanks to the pastel Styrofoam toy blocks that hug the east side of the street…otherwise known as the Greater Columbus Convention Center.

13 thoughts on “Enticing visitors downtown…and then incarcerating them.”