Elevating street art, through both the laws of physics and of popular taste.

Murals are a time-tested method of urban beautification that generally eschew political controversy, thanks to a number of factors: the low cost when compared to other capital improvement projects; the minimal disruption of other routine urban patterns (traffic, utility operation) involved in the â€śinstallationâ€ť of the mural; their persistent success at attracting private or non-profit sponsorship to fund part or all of the artwork (few murals depend exclusively on city taxes for funding); their apparent ability to deter graffiti artists or other vandals; and, quite simply, the unambiguous ability to replace a formerly boring or downright unsightly blank wall with artistic content.Â  While of course the actual content of a mural could occasionally arouse objections as easily as any other piece of civic art, I cannot recall any murals attracting public outcry in recent years.Â  Most of them go up quietly.Â  Conversely, the disapproval of Fred Wilsonâ€™s E Pluribus Unum sculpture in Indianapolis was enough to convince its original sponsors to discontinue it altogether.Â Â  One can only speculate if Wilsonâ€™s installation, in which a prominently featured emancipated slave elicited a variety of remonstrations, suffered precisely becauseÂ it was a sculpture, whereas the Arts Council of Indianapolis oversaw 46 murals across the city in conjunction with Super Bowl XLVI earlier this yearâ€”hardly an outcry.Â  Do people worry less about murals because of the expectation that they wonâ€™t last forever?Â  Any mural could meet a very sudden end if a developer constructs a building in the adjacent lot, thereby concealing the wall and the artwork.Â  Meanwhile, a particularly unpopular mural will not likely face much opposition if another muralist receives a commission to paint over it.Â

The relationship between a mural and the space over which it presides is critical in understanding how this genre of civic art has been able to endure and proliferate over the years.Â  I have touched upon this topic in two previous blog articles: oneÂ about a mural in Indianapolis that predates the big Super Bowl Initiative; another surveying some murals in Philadelphia (the nationâ€™s leading mural city, with over 3,000) in particularly distressed neighborhoods.Â  In both cases, the murals overwhelmingly rest on blank walls that front vacant lots.Â  More likely than not, those vacant lots formerly hosted a building that concealed the currently â€śmuraledâ€ť wall, and thus, a sizable painting helps divert attention away from the structure that is now gone from demolition; it almost functions as a proxy.Â  (Particularly in Philadelphia, murals often suffer an association with the low-income neighborhoods in which they are the most prevalent.)Â  But is it a suitable alternative?Â  A particularly beloved mural will mobilize a community to preserve it, both when the paint begins to peel and when a developer purchases the abutting vacant lot.Â  But since the mural owes its existence to a demolished buildingâ€”otherwise there would be no â€ścanvasâ€ťâ€”is it wise to hinder development solely for the sake of a mural?Â  In previous blogs I have argued an emphatic no; let the mural survive through photographs, but donâ€™t sacrifice a chance to restore housing in a neighborhood long neglected by investors.Â  I have yet to witness a situation where development faces hurdles due to the potential loss of an adjacent mural, but I am confident that it will happen someday, if it hasnâ€™t yet already.Â  This tacit dilemma in mural site selection makes this latest artistic incarnation in Philadelphia that much more impressive.Â  The photo below comes from a rental car parking lot at the cityâ€™s international airport: 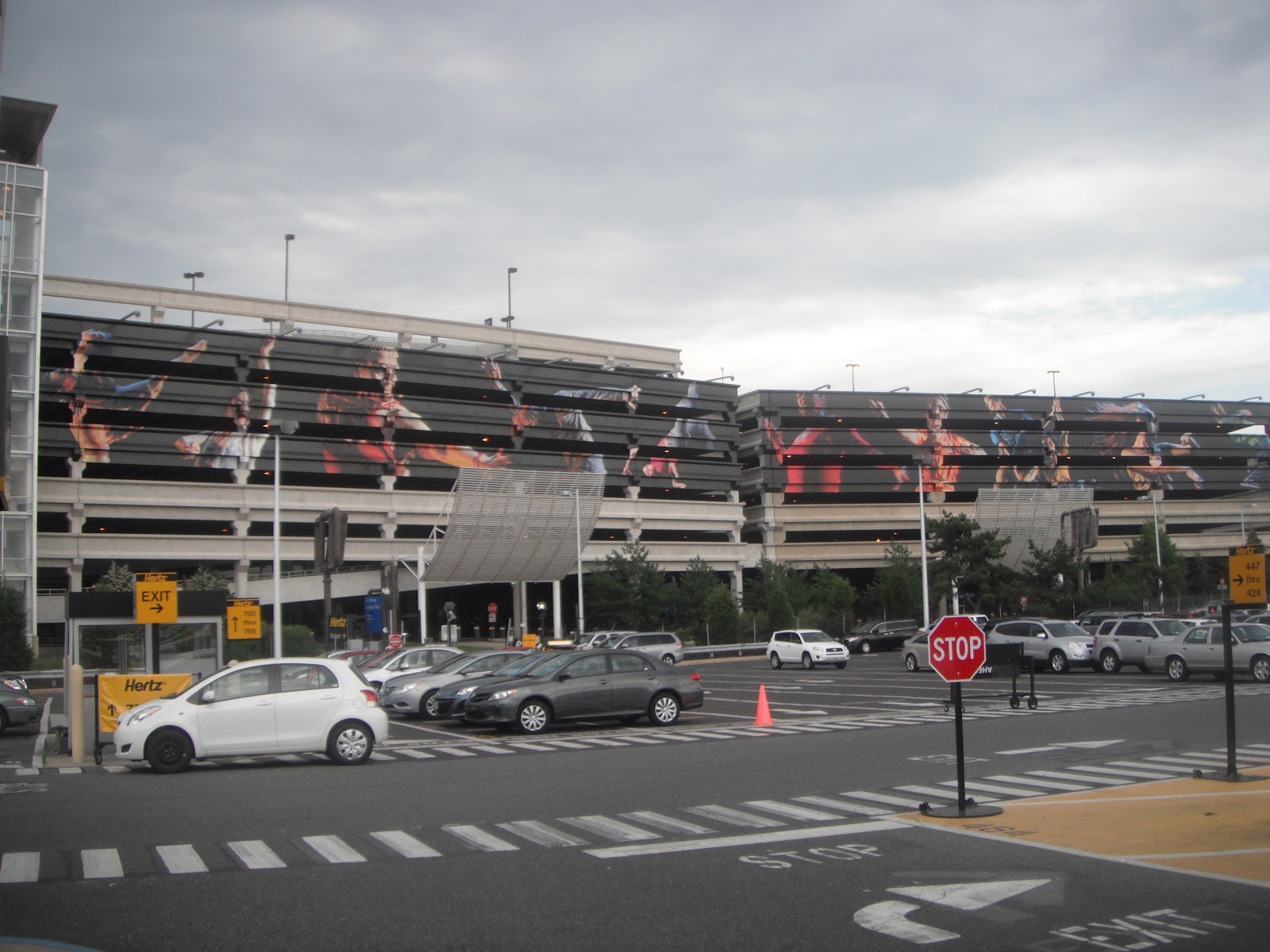 How Philly Moves, a celebration of dance, apparently is quite new, with a dedication of October 12, 2011.Â  The site selection here is particularly savvy: even if Hertz itself owns rental lot, everything in the photo ultimately falls under a single supervisory force: the City of Philadelphia, and the city would control any major developmental or infrastructural changes.Â  If the parking garage and the adjacent car rental lot donâ€™t remain under these land uses in perpetuity, I have no doubt they will at least survive for decades to come.Â  Thus, chances of a new edifice concealing the mural are unlikely.Â  Quite frankly, How Philly Moves does not owe its existence to a demolished structure nearby, unlike so many others.Â  A closer view emphasizes the prudence behind both the site selection and the beautification initiative: 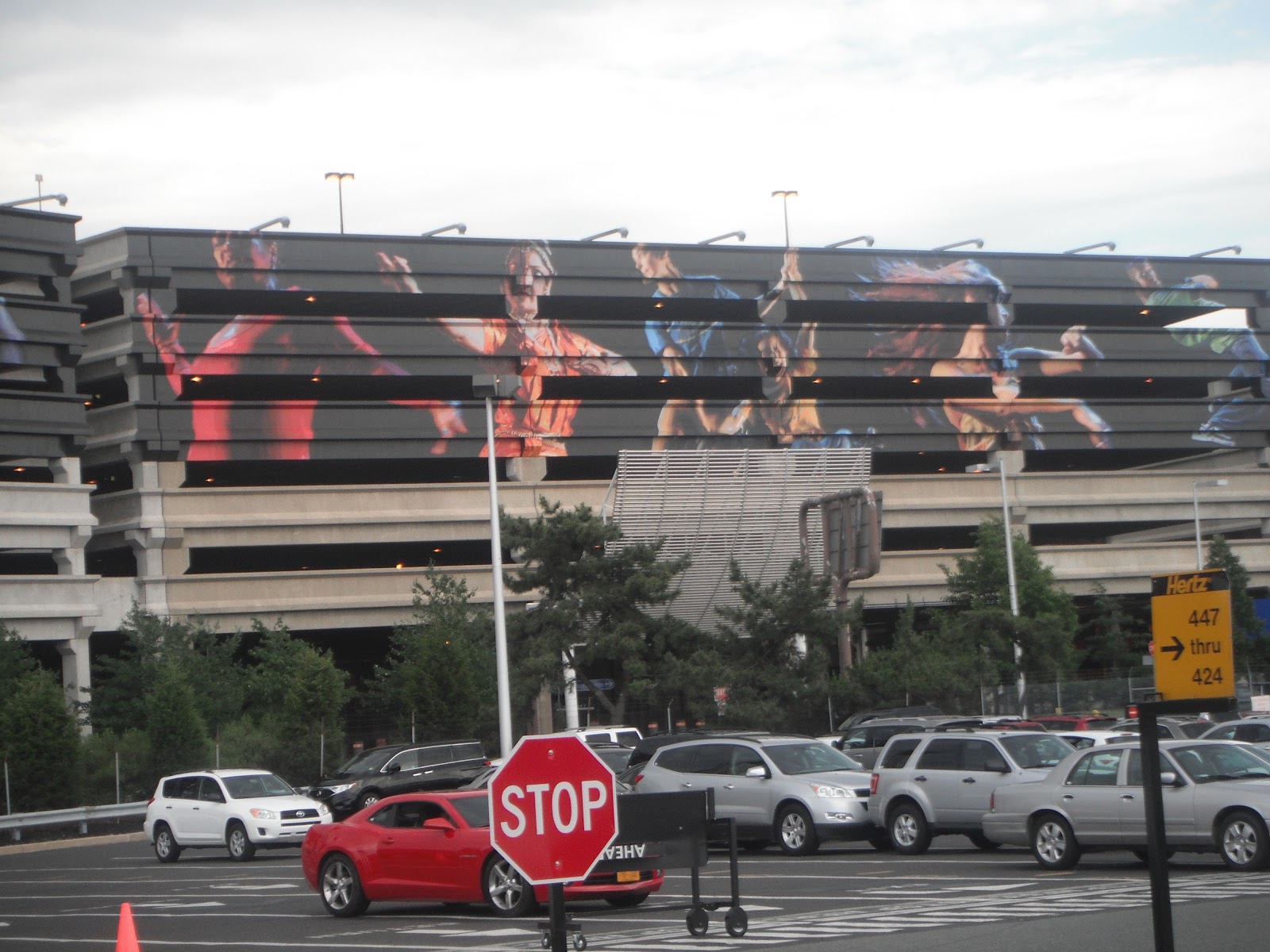 Without How Philly Moves, it was a very run-of-the-mill parking garageâ€”the design of the garage had about as much architectural interest and originality as an unintentionally exposed brick side wall.Â  I have no doubt that the artist had to take extra care to position the dancing figures across the gaps in the wall so that it still visually communicated a desirable message.Â  This mural looks tough, and it seems particularly accomplished as a result.Â  While How Philly MovesÂ would have been interesting if the figures and the mural extended downward to the lower two ribbons of concrete, the absence of paint there also helps emphasize the contrast.

I hope, in the future, cities like Philadelphia abide by this model, seeking unorthodox painting surfaces if necessary, but recognizing that strategic sites boost a muralâ€™s staying power, perhaps to the level of a stone sculpture.Â  Elaborate commitments such How Philly MovesÂ are unlikely to convey the sort of bottom-up community collaboration that the aforementioned murals all demonstrateâ€”something like this airport parking garage mural is simply too elaborate, too difficult to implement, and (I have no doubt) too expensive to reorganize en masse.Â  But its durability and technical accomplishment may compensate for the slightly impersonal approach.Â  Then again, the content may fall under much greater public scrutiny if the content seems dubious.Â  After all, a mural like this is permanent, right?

PrevUrbanism with blinders on.
Economizing and downsizing a cityâ€™s landmarks.Next