DUST: Bringing the basic training obstacle course inside the wire.

The integration of pedestrian infrastructure into the expeditionary base environment in Afghanistan has proven far less contentious than one might expect. A culture that prioritizes short-term efficiency over long-term functionality (at least partially evidenced by my article on building code violations from nearly a year ago) would seemingly focus exclusively on infrastructure that accommodates gargantuan armored vehicles that need to get around with as few obstructions as possible in order to complete their respective missions. But the fact remains that only a small fraction of the people use MRAPs, Humvees or the all-too-rare tanks to get around. A slightly larger fraction use Toyota trucks, but because most people enter and leave a base through from the air, the number of vehicles on base isn’t nearly great enough to accommodate everyone.Most people get around by foot.

While the infrastructure might not be as conducive to pedestrians or bicyclists as your average neighborhood in Portland, it’s not as bad as many bases on back on American home turf, which are consistently spread out across huge tracts of land, with huge standoff distances between buildings intended as a protective measure in case of a vehicular explosive attack. Afghan bases are typically densely settled, or, at the very least, most planners recognize the efficiency of clustering residential tents and ensconcing them within ample protective barriers. And while grade separated sidewalks are not too common— particularly at the smaller bases that usually have the shortest life span—the regulatory and operational culture recognizes pedestrians. Speed limits for vehicles are incredibly low, often only 20 kph (12 mph), with fines for violators. Many units require their personnel to wear reflector belts at all hours, just to keep them prepared if the sun sets when they are out. (Most bases are fairly dark, and some are completely blacked out for safety, so pedestrian visibility is critical.) American soldiers must wear helmets if they ride bicycles. The larger bases often devote their sprawling outskirts to storage and industry, so they must employ a shuttle system with various mapped stops for ease of getting across those vast distances. And some of the largest bases, such as Bagram Air Field, close off primary arterials at certain early hours in the morning to all vehicles to devote the road for running and PT (physical training). In a multinational base, the American penchant for order and enforcement promotes a higher standard for pedestrian safety for its soldiers than is evidenced by the more relaxed coalition forces of other countries: coalition forces do not live under a mandate for reflector belts, nor does it seem that speed limits apply (at least for the Germans). This dichotomy between US and Europeans proves ironic, since the Germans, Swedes, Croats, and Latvians are more likely to come from a pedestrian friendly, densely populated settlement pattern back home than the Americans, yet the American rules are superior at promoting safety for the numerous troops and civilians depending on boots and bikes.

In contrast with the regulatory environment, the road design in expeditionary bases isn’t always great: sidewalks are inconsistent, rights of way are narrow, turn radii don’t accommodate the really long vehicles, drainage (if it exists at all) usually consists of wide-open ditches along the verge. But pedestrians and vehicles coexist reasonably well, thanks to those vehicular speed restrictions and a culture of awareness among drivers and walkers, particularly visible among the Americans in the multinational-base in which I reside. I have yet to hear of an accident, which is always a good thing, but particularly so on a military base, because a collision between a person and an armored vehicle would almost certainly result in death. However, force protection requirements sometimes trump other safety considerations, so that the design of a compound simply accounts for defensive barriers in the event of an external attack, rather than thinking about pedestrian safety and explosive defenses as a comprehensive protection strategy. As a result, it is not so hard to find situations such as the one below: 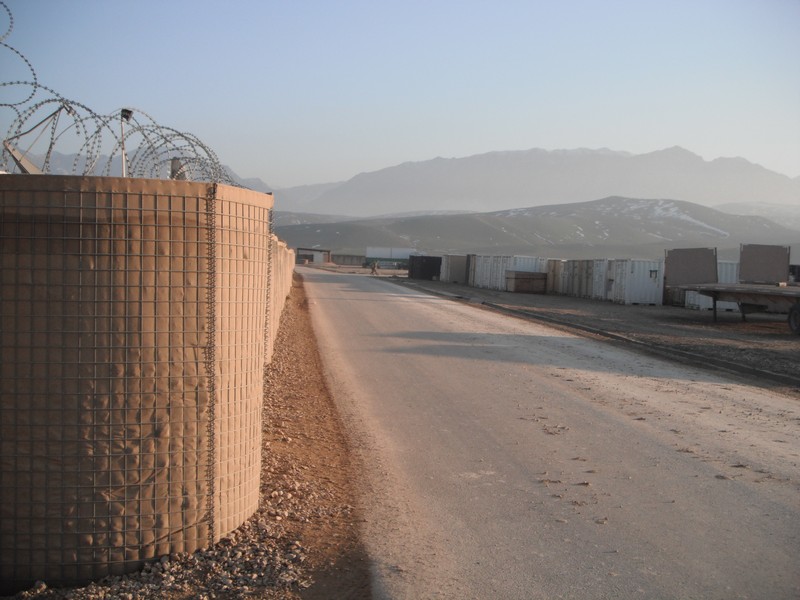 The wall on the left consists of what the military simply calls “HESCO”, much to the advantage of the UK-based HESCO Bastion company that manufactures them. HESCO enjoys a virtual monopoly on this distinctive fortification, known generically as a gabion (its brand name is a Concertainer), which essentially consists of tall (approximately 8 feet) durable paper bags enclosed in a thick wire mesh and filled with a combination of soil and a concrete topping, intended to absorb much of the impact of high speed missiles or mortars without eliciting dangerous projectiles if the bags themselves explode. The helices of concertina wire that coil on the top help keep out intruders.

Anyone who has read more than one or two of my blog posts can guess what I’m identifying as the problem in that photo above: there is simply not enough room on the side of the road for people to walk safely. The scaling of the objects does not quite capture the problem, but this footprint in the dirt does a better job of it: 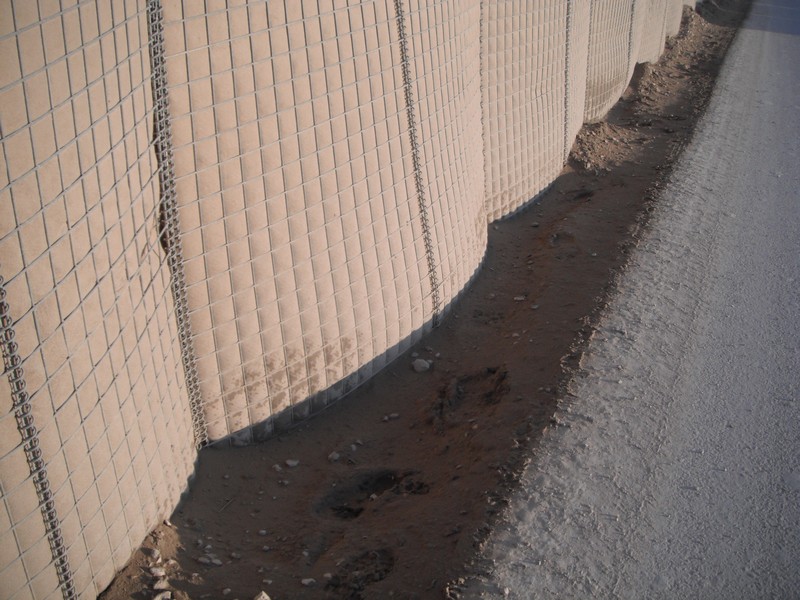 It’s narrow. During the day, this proves a minor annoyance which a person can at least in part avoid by walking on the other side of the street. The real threat is after dark, when neither side of the road is terribly appealing, since the darkness would obscure the obvious tripping hazard found in the open drainage ditch, only a few portions of which are covered and protected. 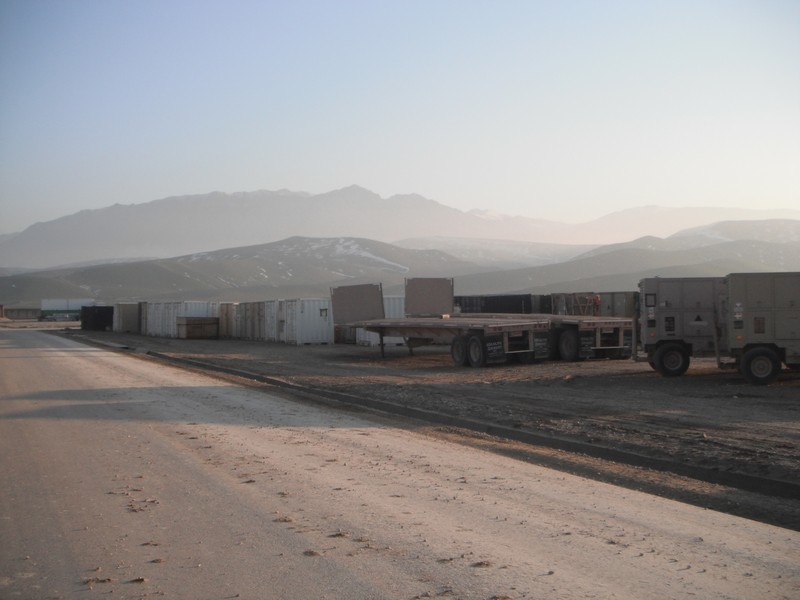 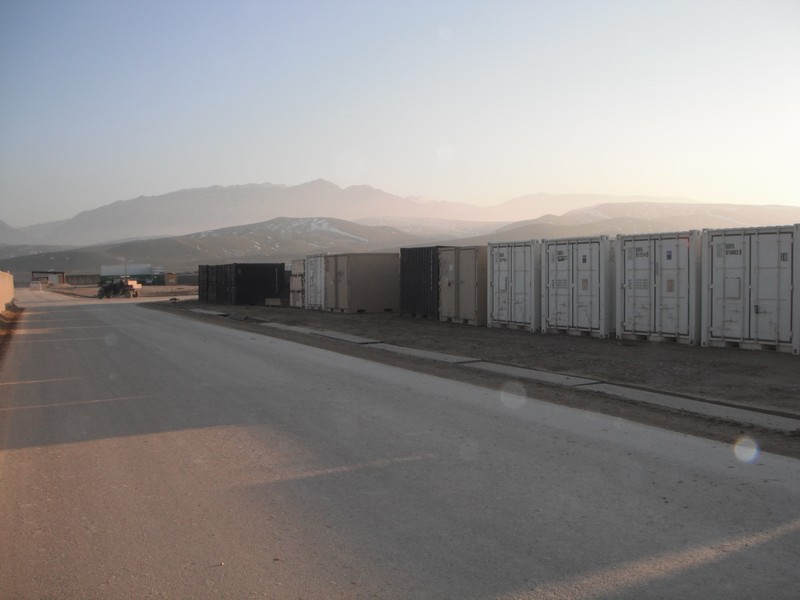 And the typical base in Afghanistan is shrouded in absolute darkness with few isolated exceptions—a particularly salient safety problem during the long winter nights. I’ll admit that I tend to sound the warning bell in situations like this far sooner than the average person would. So this design deserves a special mention because multiple colleagues have also pointed out the safety hazard this poses. Why did the original squadron build the HESCO wall so close to the street? No compound is so crowded that the construction team couldn’t afford to shift the barriers at least a few feet inward to make room for walkers, or a drainage ditch for that matter. Turning the corner at the next intersection and pivoting to the left, one can see that on the next perpendicular street, the gabion of HESCOs offer plenty of room for both pedestrians and a drainage ditch. 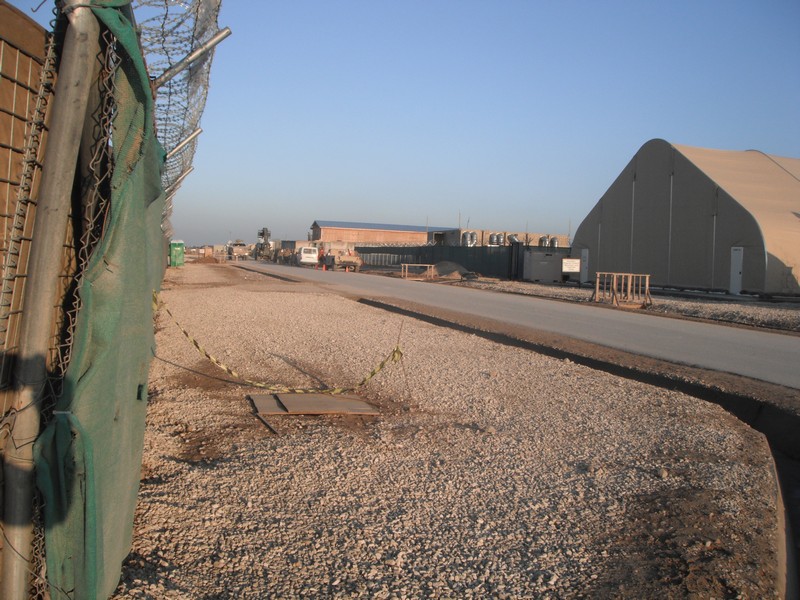 The photo merely depicts a different wall to the same compound, this time with ample room for drainage and pedestrians. This road segment, far closer to achieving a US model of a Complete Street, also features intermittent wooden bridges across the drainage ditches, prominently visible in the photo above on the opposite side of the street. At night, these bridges feature blinking LEDs that both manifest the bridges to pedestrians as well as identify the edge of the road to passing vehicles, so the drivers avoid hitting and destroying the wooden bridges or slipping into the adjacent drainage ditches.

A bit further down the road, one can witness a rare safety installation underway: sidewalks. 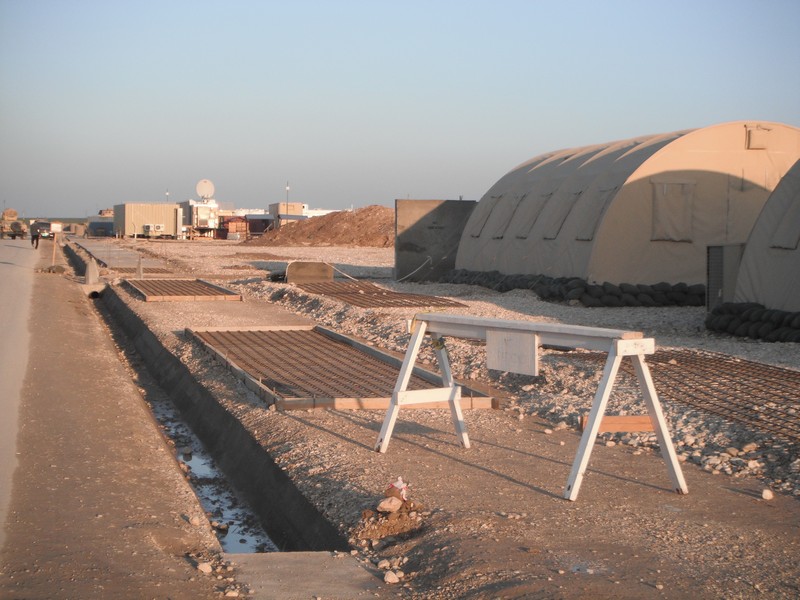 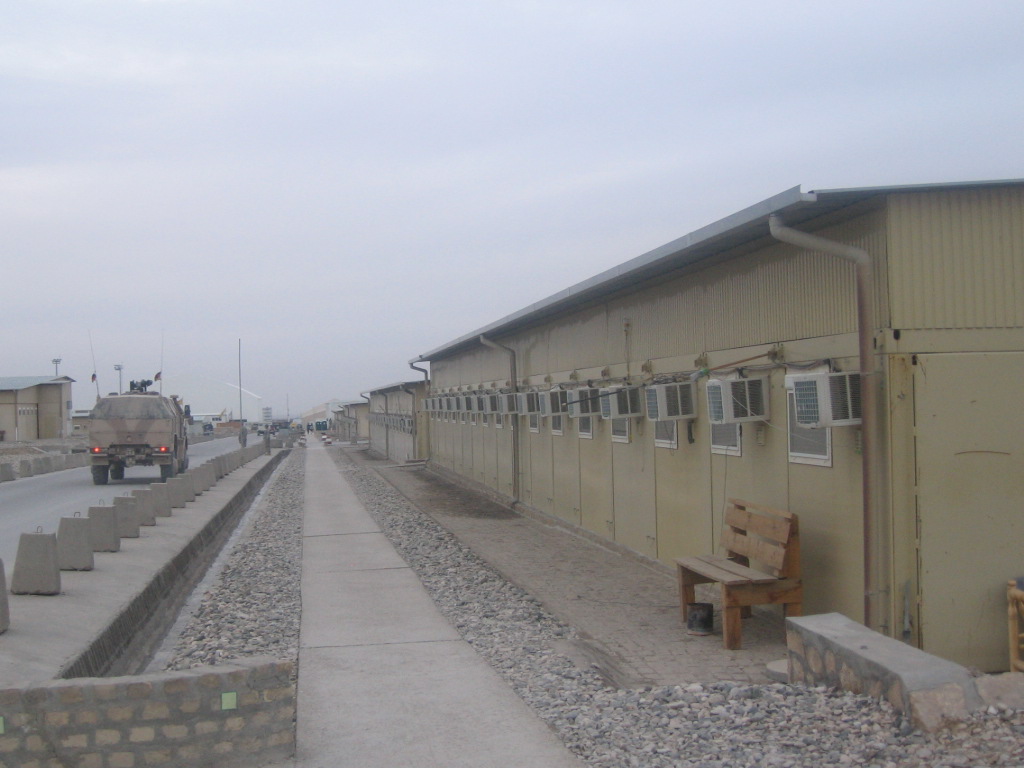 But they aren’t everywhere in the German portion. About 500 feet down the same road, the configuration of the Relocatable Buildings (RLBs) is identical, but the street lacks sidewalks, bollards, or drainage ditches. 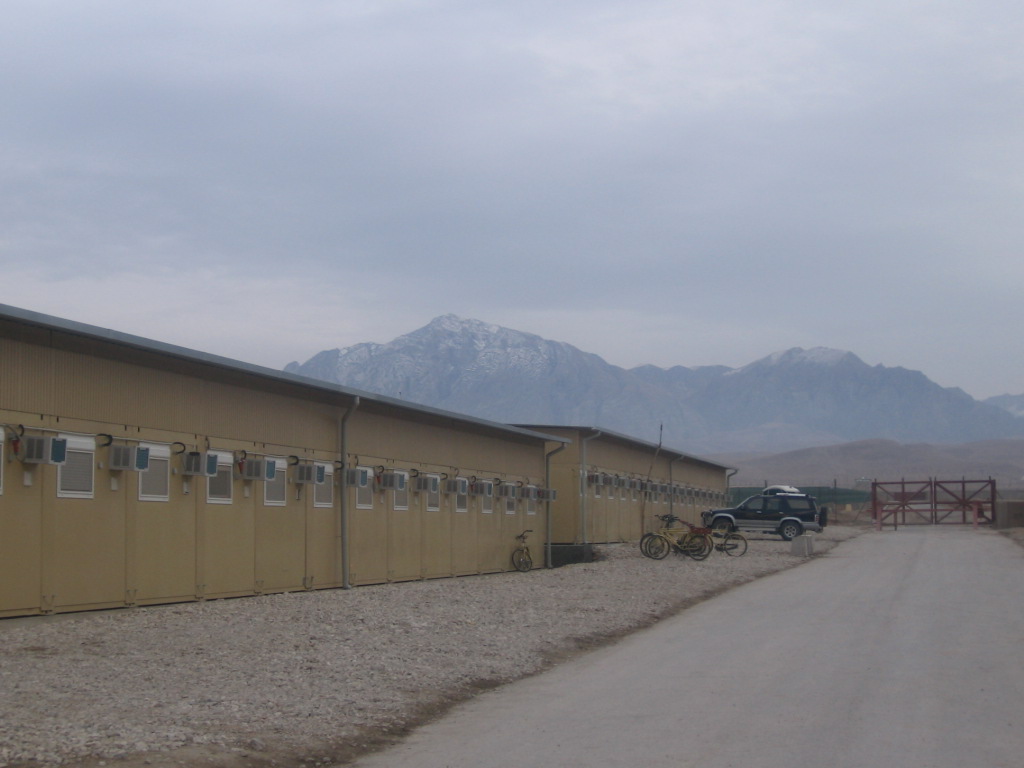 The Germans can be just as cavalier about accommodating pedestrians as the Americans have been. I scrutinized the German street design in greater detail in this earlier blog post).

The contrasting appearance between the various road segments identified in these photographs delineates a dichotomous approach to expeditionary base construction: permanent versus temporary. As the photos above indicate, German billeting is overwhelmingly permanent: the modular buildings sit in lengthy rows of two, unified by a central hallway, like a conventional double-loaded corridor hotel building. Some of the central offices and meeting spaces even use brick and mortar construction. By most regards, these buildings function at a higher standard of quality and durability, predicating upon the assumption that, since the German military purchased the land, it will maintain a presence at this base for the foreseeable future. Hungarians and Croats also appear to prefer the permanence of relocatable buildings. Conversely, at this same base, Americans use tents: 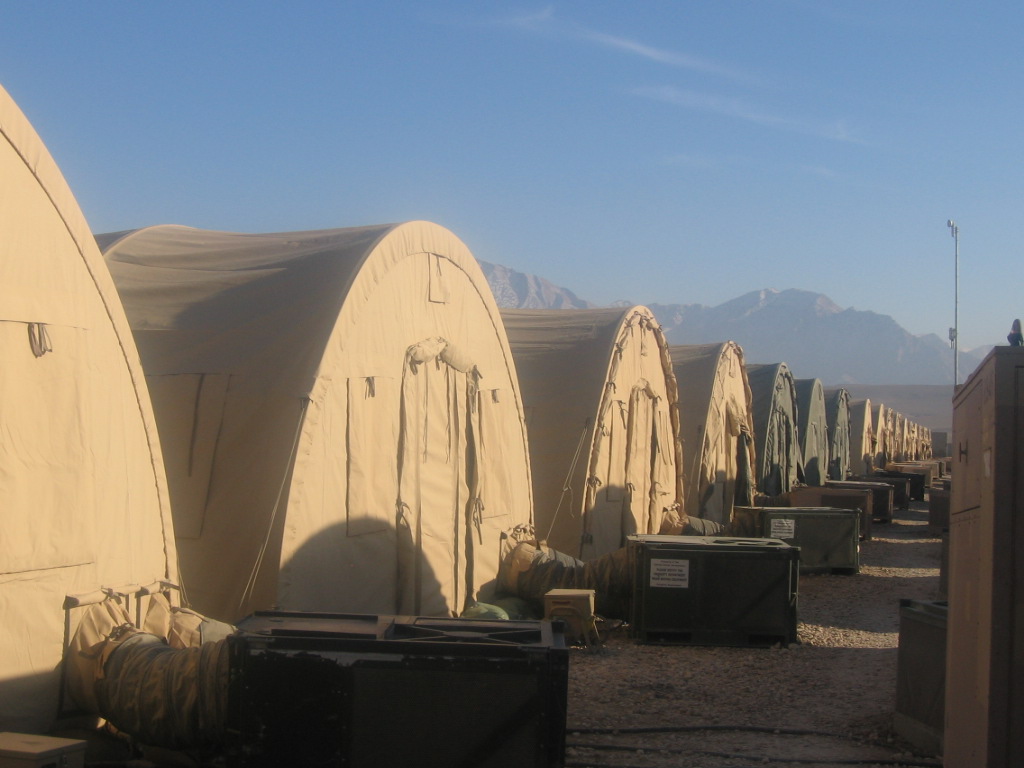 So do the Norwegians. 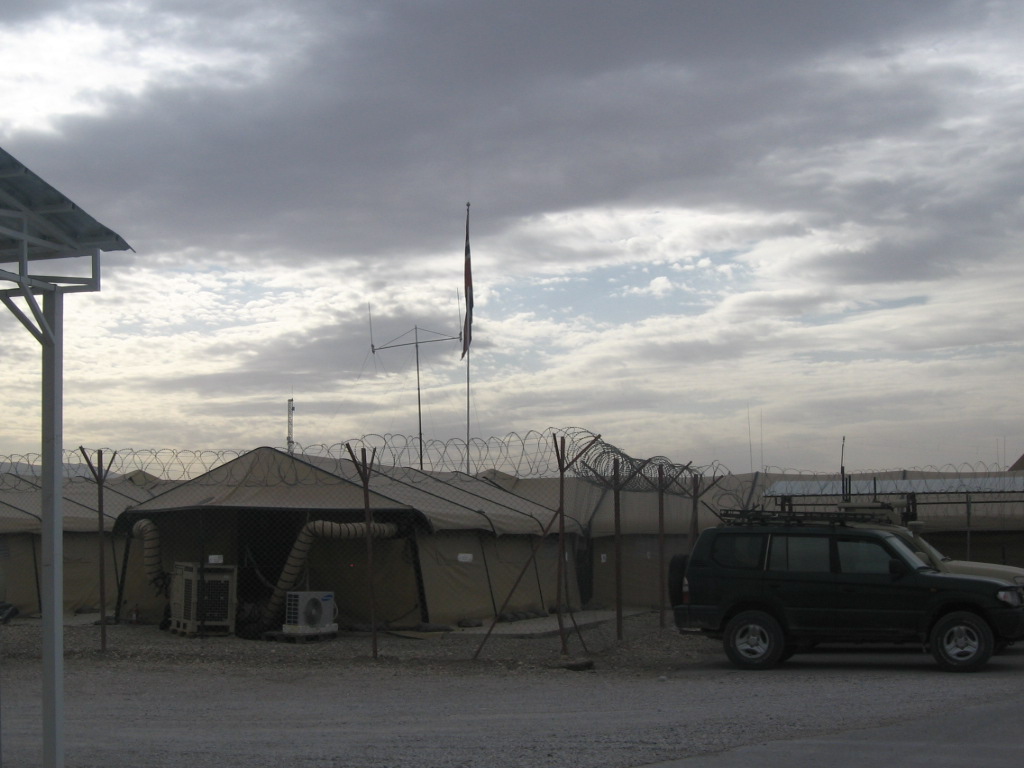 As do the Swedes, Finns, Latvians, Armenians, and Dutch. While I can’t vouch for the other Coalition Forces, I knew that the American mentality is that everything they construct should be capable of disassembly in 48 hours if necessary, leaving as little of a permanent footprint as possible.

I wouldn’t begin to assert that one safety approach is better than another—I’m not sufficiently informed on the long-term plans of Germans, Croats, Swedes, or even Americans for that matter. Permanent and temporary construction practices both have their merits. The average German base will, based on its construction materials, transition much more conveniently to eventual use by the Afghan National Army. The American bases won’t transition so easily, but if the priority is to get out and return to the land to the Afghans in a more fallow state, then clearly the non-permanent approach is wiser. My only concern comes in all the impervious surfaces used throughout the base—a topic which effectively concludes this rumination on pedestrian infrastructure. 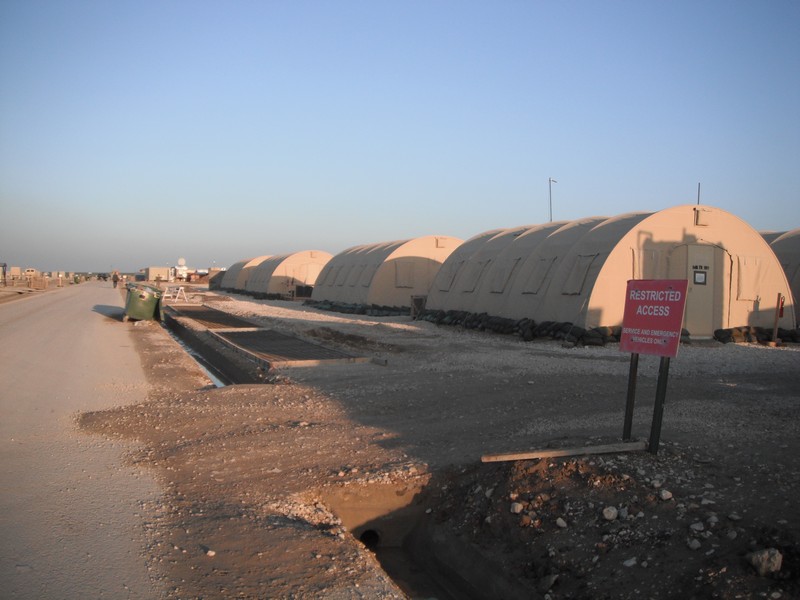 It seems like a smart decision for the Americans to build a sidewalk along a stretch of road that hosts the American PX (Post Exchange, the closest thing to a big box store), a coffee shop, a Pizza Hut, a future Burger King, and, on the other side of the road, a USO Tent, post office, gym, finance office, chapel, and computer lab. It is undeniably the road segment in the American quarter with the highest amount of pedestrian traffic. But a concrete sidewalk is permanent. So are the drainage culverts, the basketball courts, and the foundations to all those tents. In short, the vertical element is what constitutes “temporary” in American expeditionary base construction: when we leave Afghanistan, it will look empty when standing on the ground staring at the horizon line, but peering downward from a helicopter will reveal a patchwork of pavement. How likely is it that the Americans, Swedes, Norwegians, et cetera will actually remove or destroy all that concrete—or, for that matter, the far vaster ocean of gravel that occupies most other unpaved, habitable portions of the base? Then again, even concrete pads and paved streets can prove a significant investment that would allow Afghans more freedom to build upward from an existing configuration. Concrete pads for temporary FEMA trailers in Louisiana after Hurricane Katrina helped pave the way for the possibility of more permanent mobile home parks after the immediate need had subsided. Paved roads, drainage ditches, and sidewalks are amenities that much of Afghanistan does not enjoy, so although paved infrastructure forces future inhabitants into a certain configuration, it does provide provincial governments with infrastructure that they otherwise cannot always afford. A middle-of-the-road safety approach—combining permanent infrastructure with semi- or non-permanent structures—may prove the wisest compromise. Though I doubt that engineers at my compound will ever correct the mistake of building the HESCO gabion too close to the road and squeezing out the pedestrians, at least the potentiality for a correction remains in ways that wouldn’t if a permanent brick wall ran along the road instead of soil-filled bags. Like all other aspects of expeditionary base living, pedestrianism is malleable—precisely as it should be when tomorrow’s exigencies could require an immediate change in the urban form.

2 thoughts on “DUST: Bringing the basic training obstacle course inside the wire.”