MONTAGE: Washing and cleansing every stain from the sin of neglect.

This montage blog post pioneers an unusual organizational approach: the time elapse. During a six-month period in which I was living in the city of Baton Rouge, a particular edifice caught my attention: a stalled high-rise with its load-bearing walls fully complete but little else. All evidence suggested that its owners had abandoned it quite some time ago: graffiti slathered upon the lower levels, overgrown weeds, a makeshift chain-link fence installed to deter trespassers (unsuccessfully). Sadly, these sorts of structures are all too common in American downtowns after the housing bust that began around 2008: even some of the most successful ones have some weathered relic from an era of high demand for vertically oriented condominiums that has since retreated almost completely, along with the rest of the owner-occupied market. Fortunately, many of them have since gotten converted to apartments—a downgrade by most assessments, but better than sitting vacant for years. The building that caught my attention in Baton Rouge wasn’t so lucky: 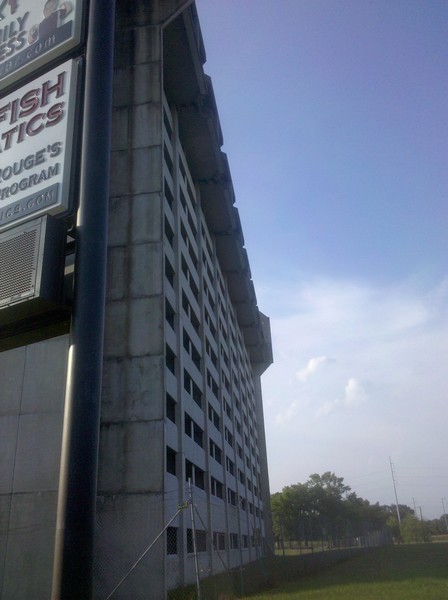 It could be anywhere—except that it looked like it had been abandoned far more than three years ago. And Baton Rouge’s downtown hadn’t been enjoying a huge housing boom up until the bubble burst. Perhaps most importantly, this relic doesn’t even sit downtown. It would have made sense if the developer put the kibosh on construction when he or she realized the real estate wasn’t as lucrative as initially expected, perhaps due to a surrounding area that was turning increasingly low-income. But that wasn’t the case here. This faceless golem stands in one of the most sought-after parts of Baton Rouge metro, just down the street from the Mall of Louisiana, the state’s largest and probably most successful megamall. It’s not far from the Highland Road corridor, where Baton Rouge’s stateliest homes preside over large lots. And, just a mile further south sits Perkins Rowe, a high-end lifestyle center with multi-family housing on the upper levels, an ambitious project that would probably have lower vacancy levels if it hadn’t opened at the peak of a recession. Either way, this building clearly struck me as an oddity. Why was it abandoned?

The answer: it was a casualty of one of the biggest televangelist scandals in history. 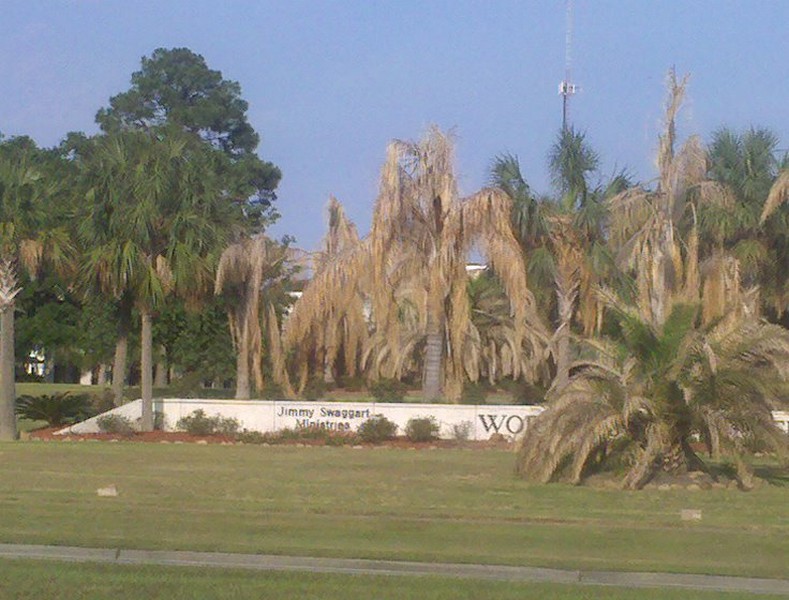 The 206,000 square foot building was intended as a dormitory for students attending the Jimmy Swaggart World Ministry Center. Reverend Jimmy Swaggart fell from grace after being caught at a motel outside of New Orleans with a prostitute in February of 1988; his widely publicized contretemps may not have toppled his empire, but it certainly stalled the growth of his once-burgeoning bible college. His very public, televised apology (without acknowledging what he had done) remains legendary; YouTube claims over 150,000 views. After the Swaggart sex scandal gained momentum, enrollment at what was then the Jimmy Swaggart Bible College plunged, and construction stopped at the dorm by 1989. Apparently many other plans for Swaggart’s campus stalled in the late 1980s, and a second time caught with his pants down in 1991 only further thwarted any chance for renewing construction as a dorm. However, this building most likely advanced much further in construction than anything else stalled by Swaggart Ministries after his 1989 scandal, and this first set of photos, from May of 2010, shows it at its bleakest. (While the rest of the campus appears fully operative twenty years later, the old Swaggart dorm has sat in limbo, and it would appear from the above photo that many of the palm trees aren’t getting the care they need to fend off disease.) 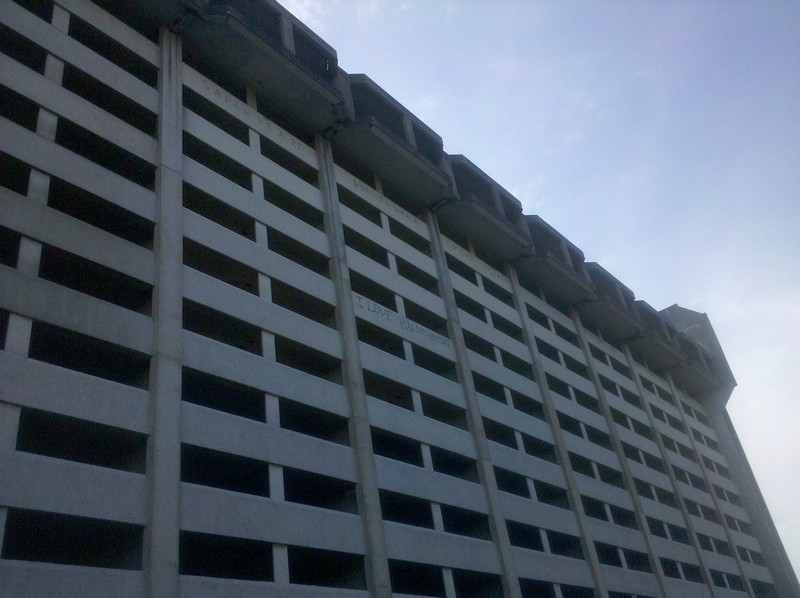 For nearly two decades, a concrete shell sat there in lugubrious decay, even as the area around it boomed, culminating in the construction of the Mall of Louisiana in 1997. Finally, the abandoned shell caught the interest of a developer, who in 2007 hoped to begin rehabilitation of the structure to convert into a high-end hotel, but the real estate and financial market’s slump prolonged the delay. A somewhat recent Associated Press article indicates that the developer ultimately scaled the project down from an initial $75 million proposal to a more modest $42.5 million: a 256-room hotel with conference rooms and a ballroom. Interestingly, the Louisiana Legislature applied Tax Increment Financing (TIF) to expedite the project, which uses the estimated future sales tax revenue to help finance a project that might otherwise lack either the equity it needs or is unable to secure an adequate loan. While this tactic is common throughout the US, governments normally apply it in economically disadvantaged areas—not directly across the street from a metro’s most upscale shopping hub. The City of Baton Rouge also granted tax credits under the state’s restoration tax abatement program.

Though it lacks the materials, plumbing, wiring or mechanical engineering that would be most vulnerable to inclement weather or thieves, the cement skeleton of this Swaggart dorm still shows considerable wear and staining from elements. 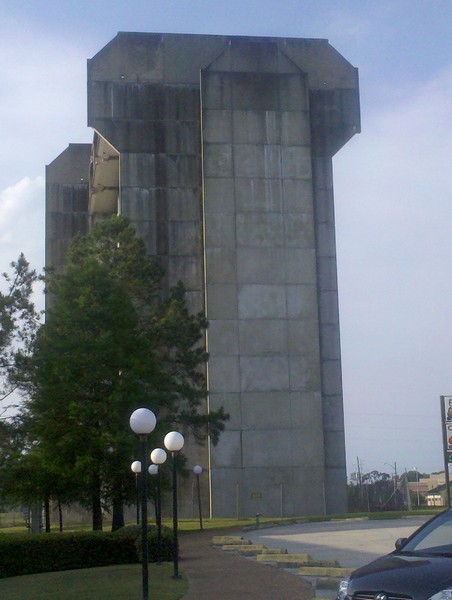 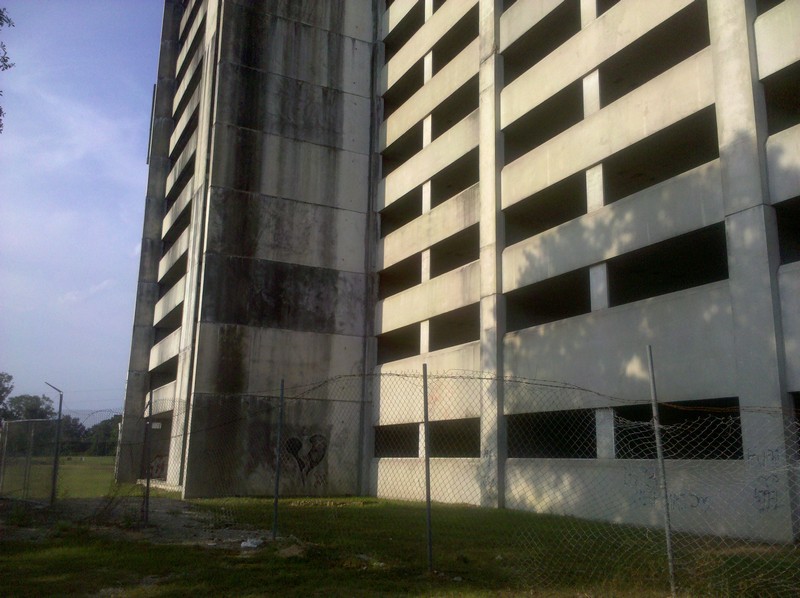 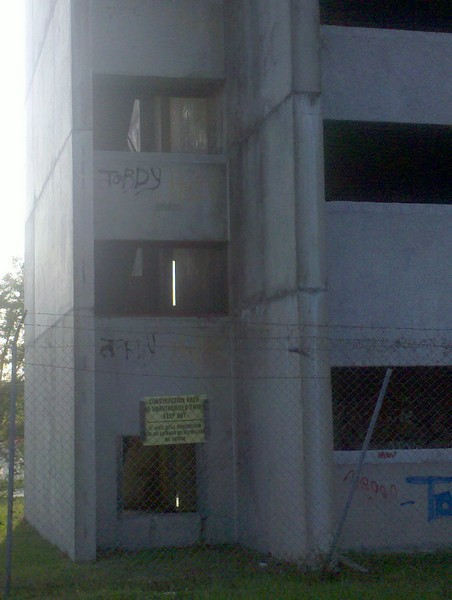 And many of the vandals made their way up to the top floor. 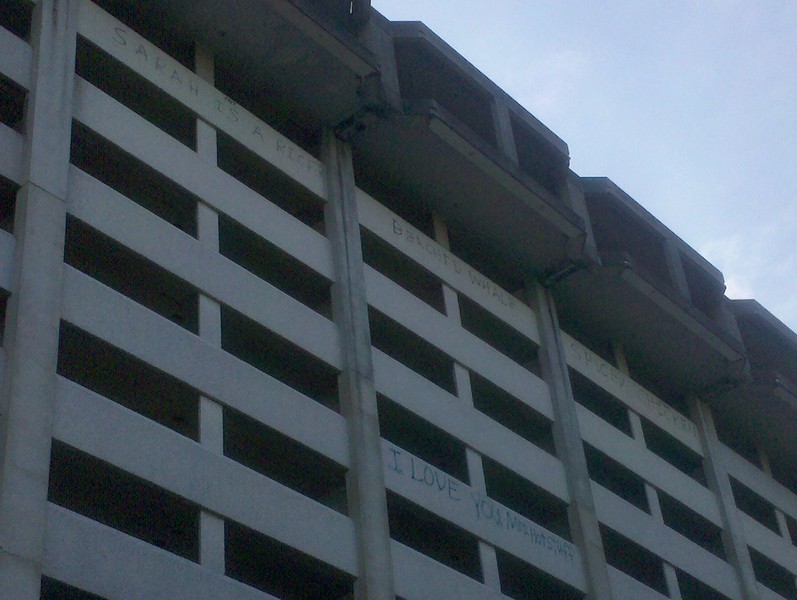 A return visit to the Swaggart dorm a little over two months later (near the end of July 2010) revealed a surprising level of further deterioration and graffiti. 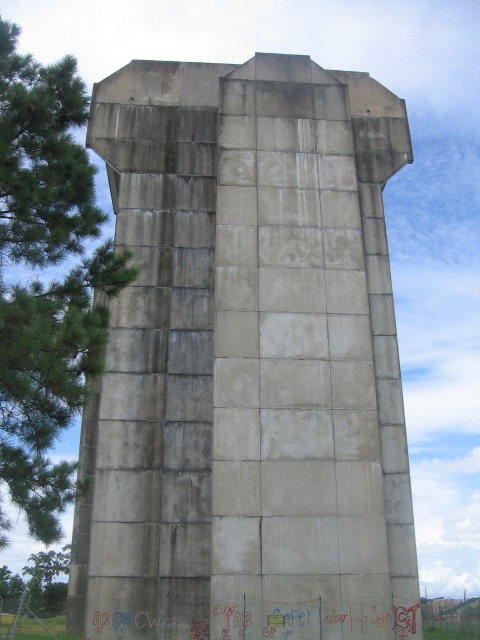 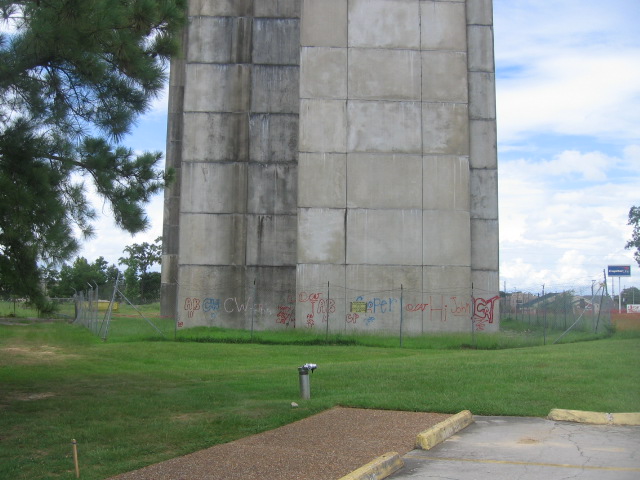 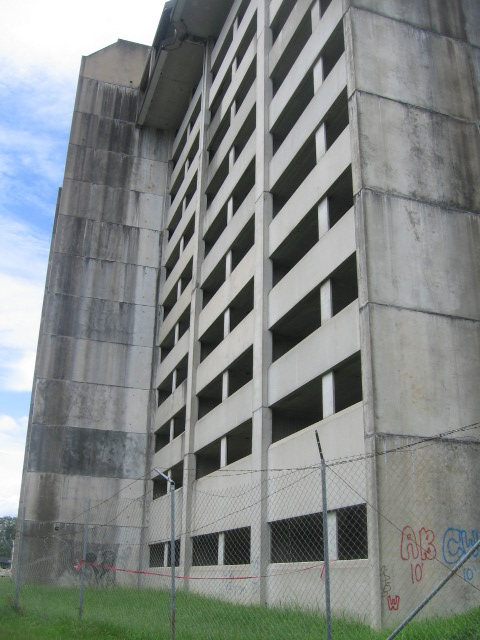 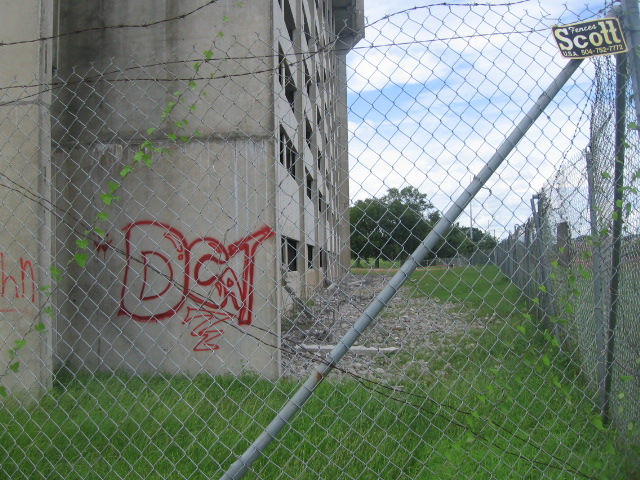 My one college course in materials science doesn’t provide me much illumination on why the concrete on the upper levels seems to be in much worse shape than closer to the ground, but it is obvious that these higher floors are deteriorating considerably. Could that have really happened so quickly since May? 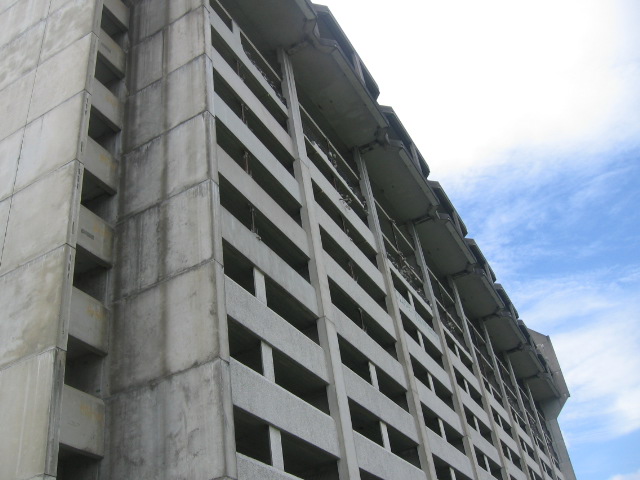 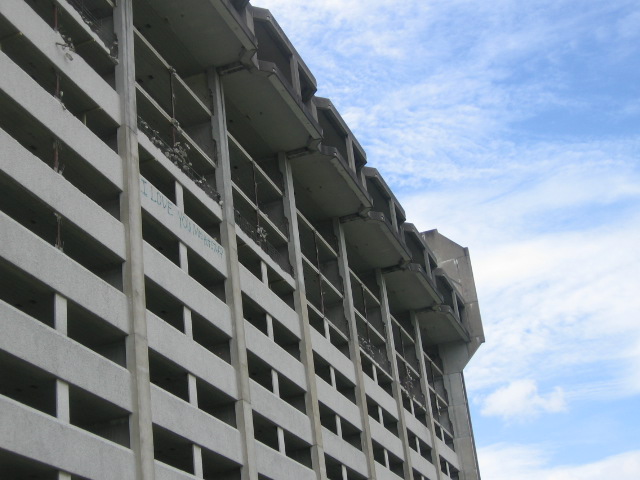 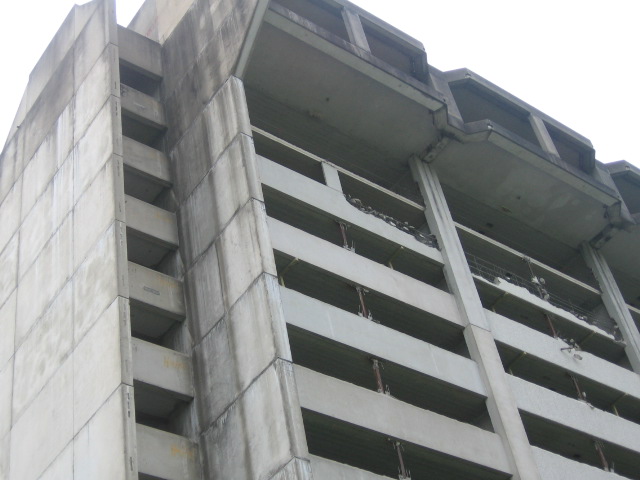 It looks systematic, as though it involved a human hand, dismantling the top floors and working the way down. An orange outer fence on the front side (facing the principal arterial, Bluebonnet Boulevard) appears to have been installed much more recently and suggests the sort of deterrent used for construction projects. 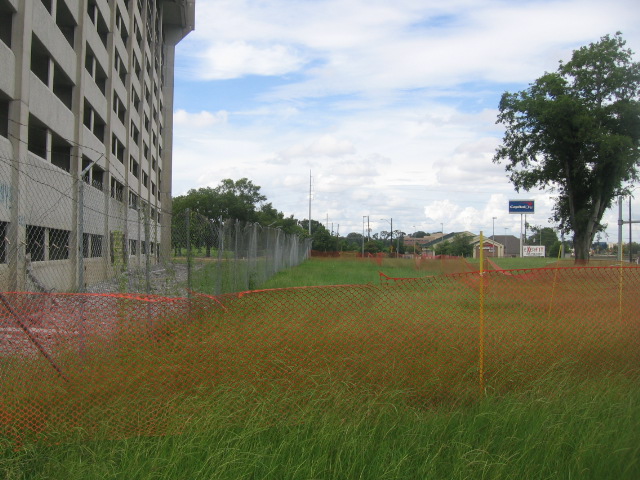 Without having read anything about plans for the site, I drew the conclusion that the building was getting demolished, an assumption substantiated by the presence of backhoes and other earth moving equipment. 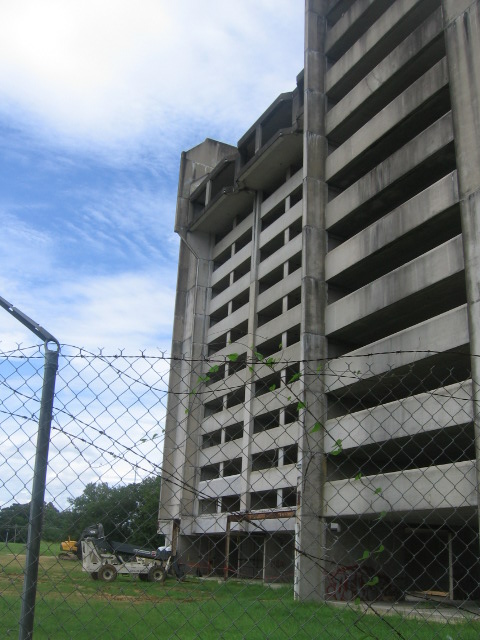 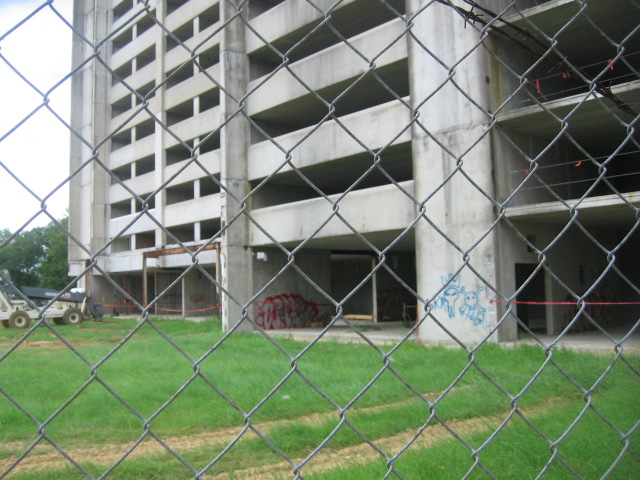 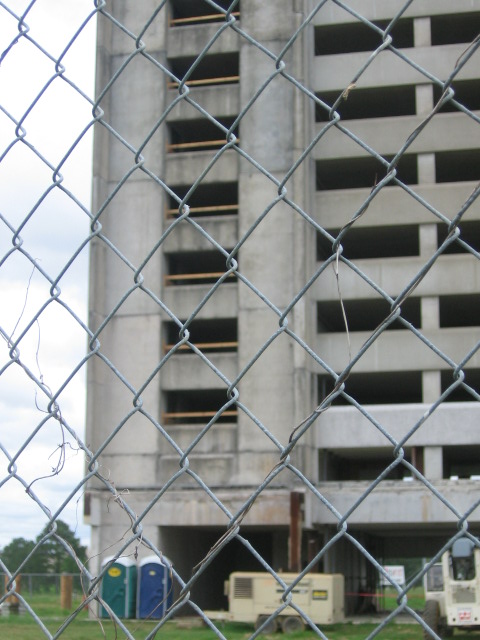 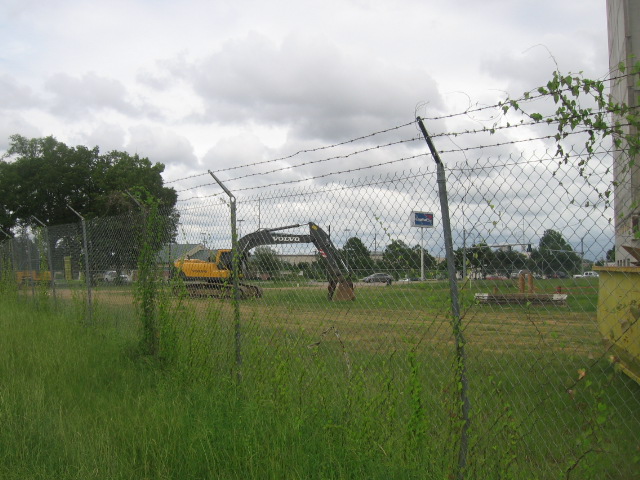 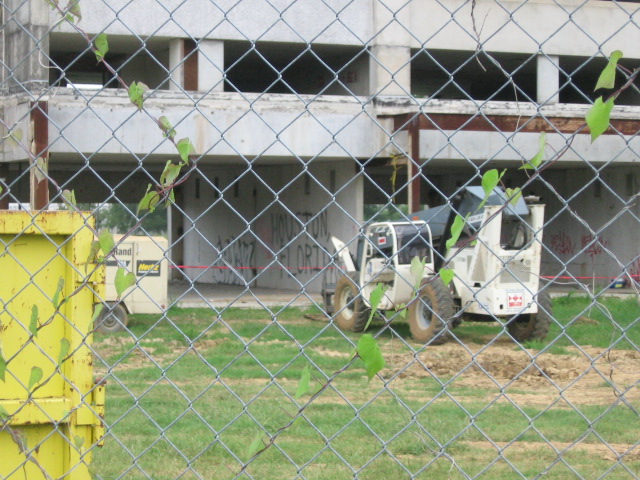 And, at that point, my chronicle of this building seemed likely to come to its end; shortly thereafter I was reassigned another city. Thankfully, my ever-loyal blog-follower and South Louisiana native, Nici English, remained close to the Red Stick and was able to follow it over the ensuing months. With a sharper pair of eyes and an undoubtedly better camera, her professional approach picked up where I left off. (And I cannot help but offer a shameless promotion, since she more than deserves it: her personal site, Oak Tree Photography offers breathtaking black-and-whites of the built environment across a number of southern cities.)

The developer had clearly taken real initiative over the winter: by late February of 2011, the “Swaggart dorm”, as we call it, was taking on a new life, with the installation of what appears to be insulation. 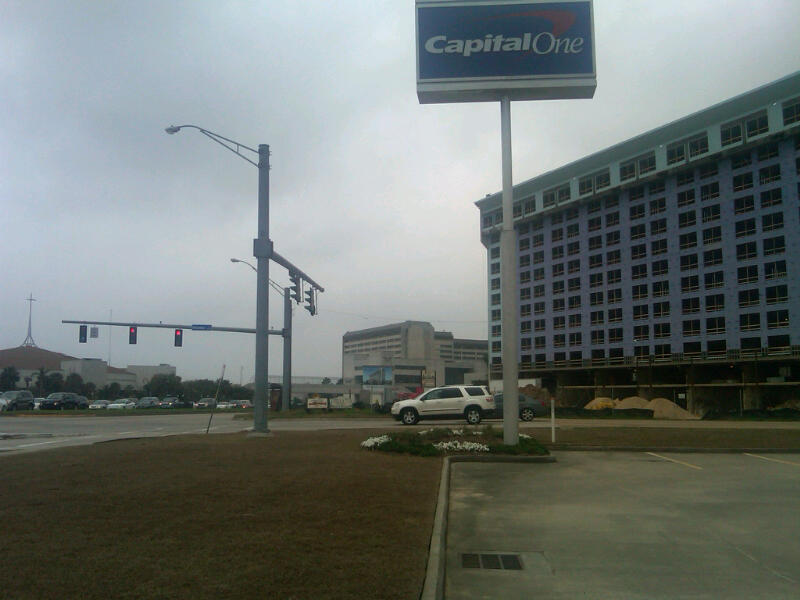 Note that the developer has apparently deemed it unnecessary to remove the graffiti on the concrete at the ground level of the building. 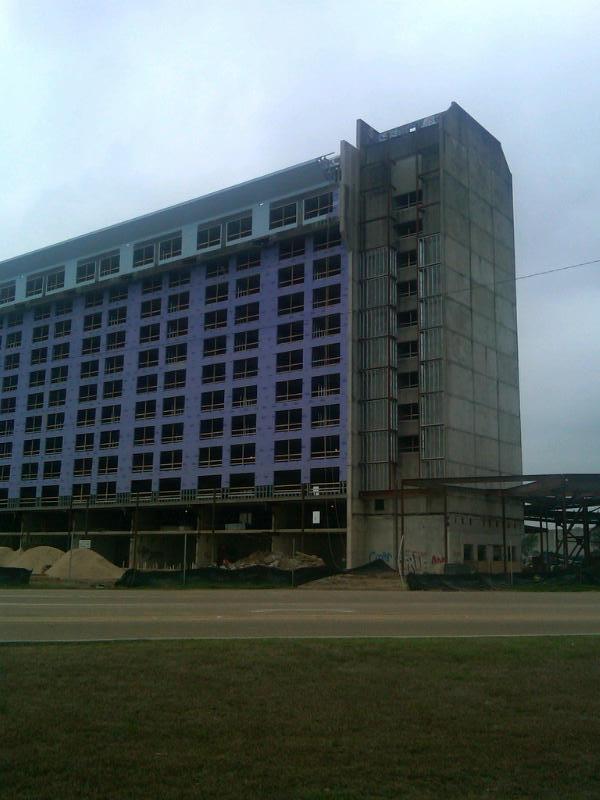 A few weeks later, a sign offer promise of what is to come: 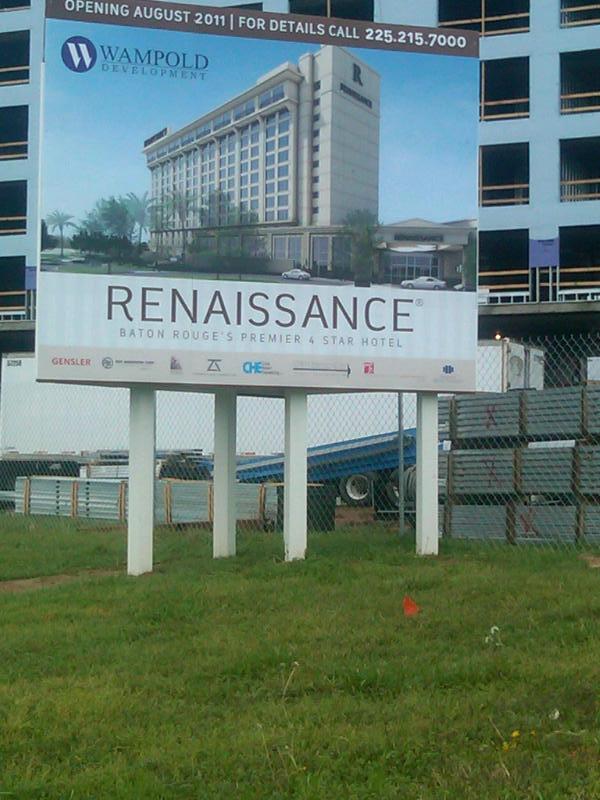 By late August, clad with what I strongly suspect is EIFS, the Renaissance Hotel is starting to establish its identity. 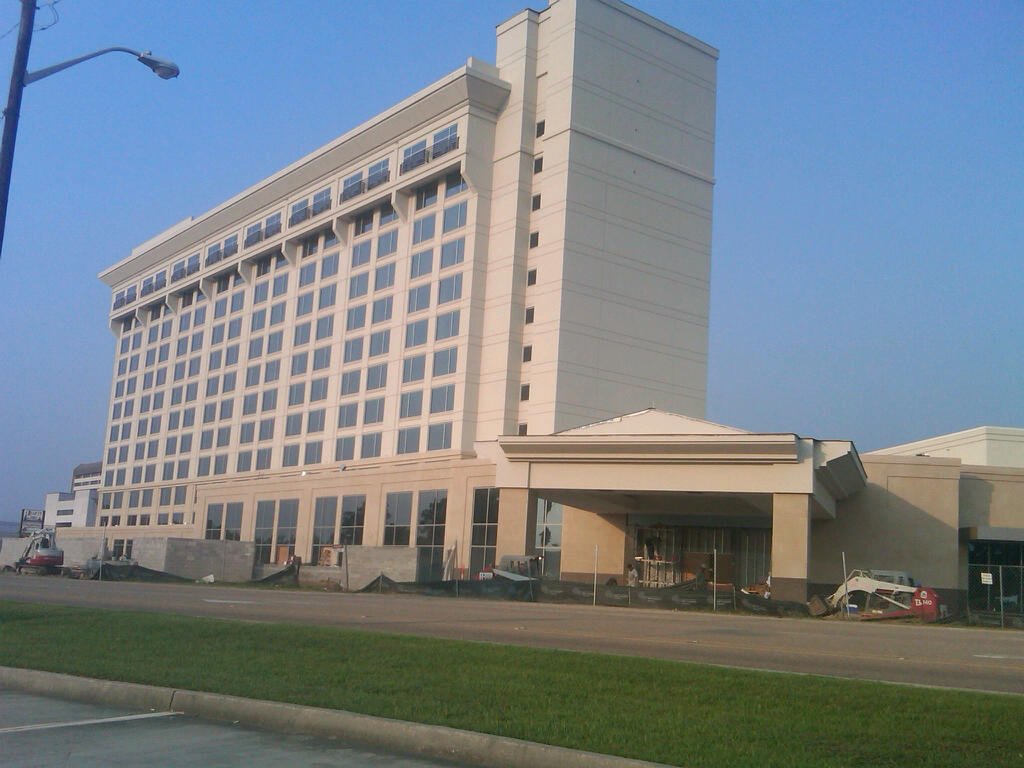 And, in mid October, the building opens to the public. 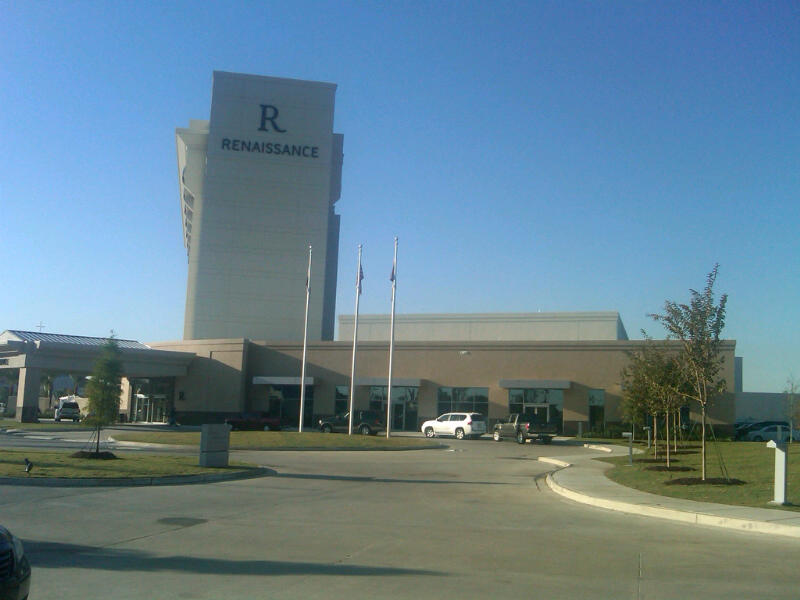 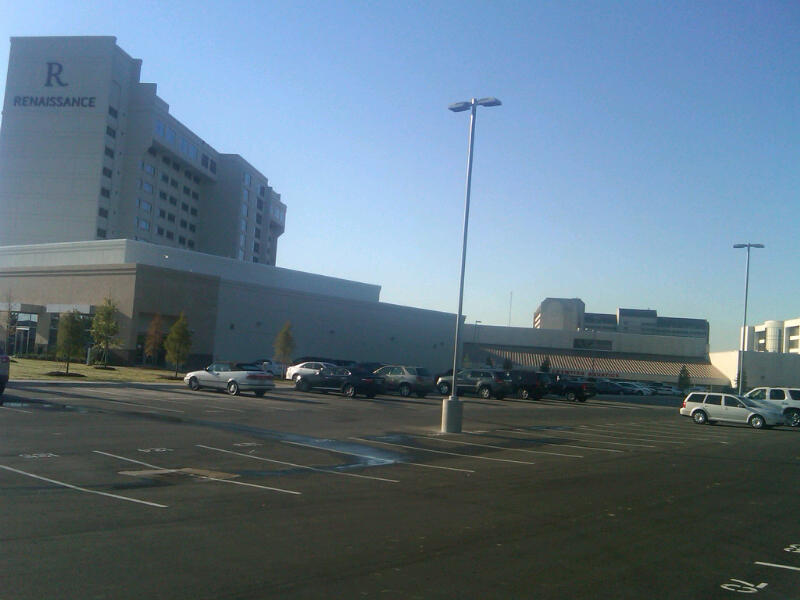 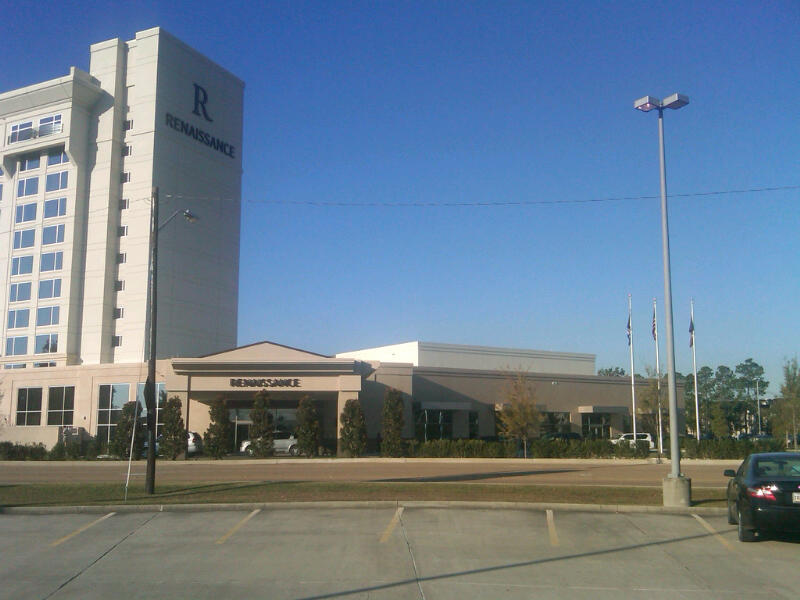 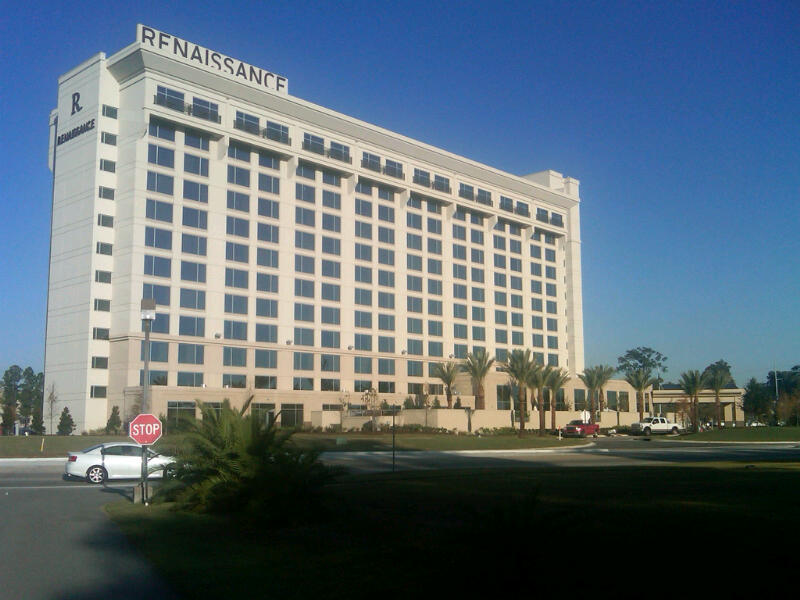 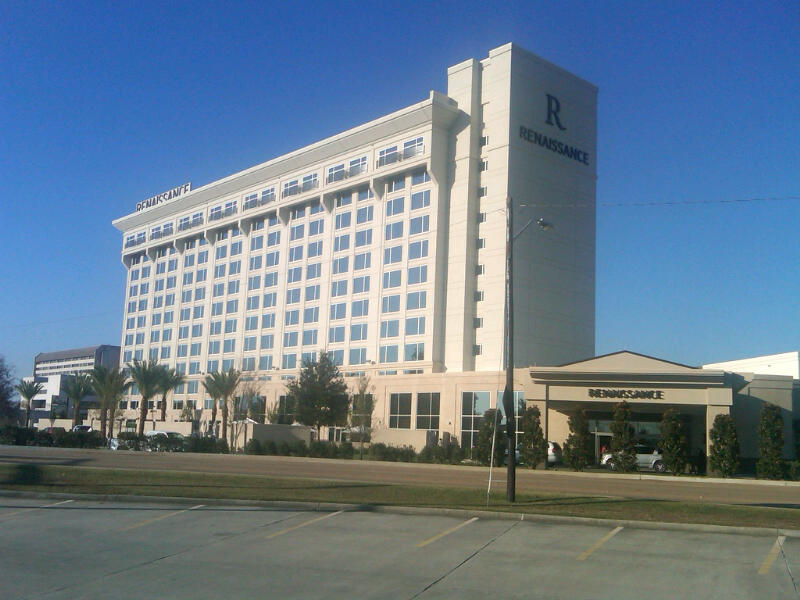 It appears that some of what I saw as deterioration on that top level was actually an alteration of the fenestration: hotel rooms generally emphasize larger windows than dorms. I’m not going to pick apart the architecture any more than to acknowledge that the huge “Renaissance” sign atop the roof manages to compensate for its dull typography by suggesting to me a throwback to the 1950s—a time when rooftop signs for hotels were commonplace, even though at that time the majority of Baton Rouge’s hotels would have likely been downtown and not off a major highway in suburbia (especially not on Bluebonnet Boulevard, which was nothing but countryside sixty years ago).

It was almost twenty-five years in the making, but now this plot of land has a structure worthy of its market value. In a less sour economy, this suburban arterial would probably see many more construction projects capitalizing on every developable square foot. As it is, the redevelopment of the Swaggart dorm represents an ostensible public-private partnership effort at revitalization, the heart of which remains a mystery. Did the area really have to depend on a TIF and tax credits to turn the blighted Swaggart dorm around? Perhaps I overstate the area’s desirability: if it were that lucrative, something would have been erected a long time ago. But the truth of the matter, I suspect, is that the area really is desirable, but a stalled mid-rise project throws a wrench into any other efforts. The cost of demolition before a developer can build may offset the area’s intrinsic market advantages. As mundane as this project may seem, it may have taken a shrewd developer with an eye for the building’s “physiognomy”—coupled with a city/state government willing to go to bat—in order to get anything off the ground. And at least the Renaissance Hotel seems to be taking care of its trees; something that will hopefully inspire Swaggart Ministries to do the same for its remaining share of the campus on this stretch of Bluebonnet Boulevard.

2022 UPDATE: The Renaissance Hotel appears to remain fully operational, even

PrevThe college paints the town anything but red.
Technical tangles.Next