The college paints the town anything but red.

The phrase infill development can loosely refer to a wide variety of approaches with the overriding aim of introducing (or reintroducing) a higher density of habitable buildings into a mature, already established built environment. In most cases, the surrounding infrastructure for an infill parcel has long been in place, the adjacent properties are at least partially if not completely built, and zoning regulations already encourage a particular kind of land use. Usually the infill target is a vacant lot, often which previously hosted a structure that has since been demolished. Sometimes the parcel was simply an inadequate size or an unusual shape, precluding it from getting developed to the same degree as its neighbors; other times the zoning is too stringent and prohibits what a developer may perceive to be the highest and best use of the land. But infill does not apply just to vacant parcels. The phrase “highest and best use” suggests some sort of intervention if property is perceived to be underutilized as well. For example, in successful town centers, high property value and high density of structures usually benefit from co-dependency when viewed through the lens of land economics. That is, because the cost of land in a sought-after downtown is high, it becomes far more prudent to build intensely in such a district, which usually results in vertical development, since that’s the only way to squeeze in lots of leasable area on a small parcel. The high concentration of economic activity in these clusters of towering structures downtown helps to attract other developers and further escalating demand for a finite stretch of land. The densest, most valuable urban real estate in the US has little room for one-story buildings like warehouses or most strip malls, and even lower tolerance for surface parking lots. Thus, the replacement of a parking lot, a squat relic from the industrial heyday, or a privately managed green space with a tall structure with the potential to generate greater revenue also constitutes infill development.

In principle, the typical infill project should serve as a win-win situation for both public and private interests: the developers get to build in a usually already desirable area without incurring much of the cost of infrastructure (since most of it has already been installed long ago); the public sector gets to add a more valuable piece of real estate into its tax rolls. Yet infill projects still tend to be highly controversial across much of the US, with adjacent property owners typically raising the loudest objections. Why would they fight a development that will most likely help sustain high property values in the area while further dispersing the tax burden across a greater number of owners? The problem is that infill development indisputably adds density to the district, and Americans intrinsically distrust density. While such an assertion may seem to paint the populace with a brush that is both broad and steeped in vinegar, the evidence that Americans eschew density is everywhere, and I’m not intending this statement as a criticism. The majority of American cities—particularly the older, eastern ones that predate the automobile—have largely been shrinking for more than a half century. Though rural America has depopulated as well, it is not out of the farmers’ desire to move to the city; both rural and urban dwellers have fled en masse to the low density suburbs. The US has always boasted incredible stretches of sparsely inhabited land; even as the population exceeds 300 million, it can still make this claim. But by most other countries’ standards, even the cities themselves boast vast expanses with few or no people. American cities are, on average, among the least densely inhabited in the world. In many regards, it is an achievement: a product of such aggregate wealth that we can afford to live and function with great distances between one another. It is a triumph of self-actualization. But low density also undercuts the ability for cities, often limited in their capacity to grow through annexation, to continue to administer and function effectively when people demand to live far away from one another, often outside of the municipal boundaries altogether.

The result of this aversion to density is manifest in the numerous complaints and challenges to infill development. It will cause ungodly amounts of traffic in the area. It will spark an increase in crime. It will deprive the children of outdoor space in which to play. Many remonstrators have even claimed that it will lower property values. Though such a notion goes against the fundamental intent of infill, such objections may at a micro level (both spatially and temporally) be true: if the prevailing culture of the district is anti-density, the act of shoehorning density will only undercut the overall appeal of the area and may lower demand for property. (Then again, it could attract a new demographic specifically drawn to such density.) A trick of the trade among developers who work in already high density areas is that they must inflate the leasable area of a building beyond their goal for profitability, because they will always have to cut back the density when the neighbors raise objections through their council members. Thus, a developer seeking to build a six story building on a neglected parking lot in an a tightly-knit middle class neighborhood will likely initially propose eight or nine stories; otherwise, if he or she begins with a six-story proposal, the neighbors will probably try to whittle it down to only four.

I know next to nothing about the development history of the building from the photo below, taken during a brief visit to Blacksburg, Virginia last year. I don’t even recall enough of where it’s located to attempt any research. 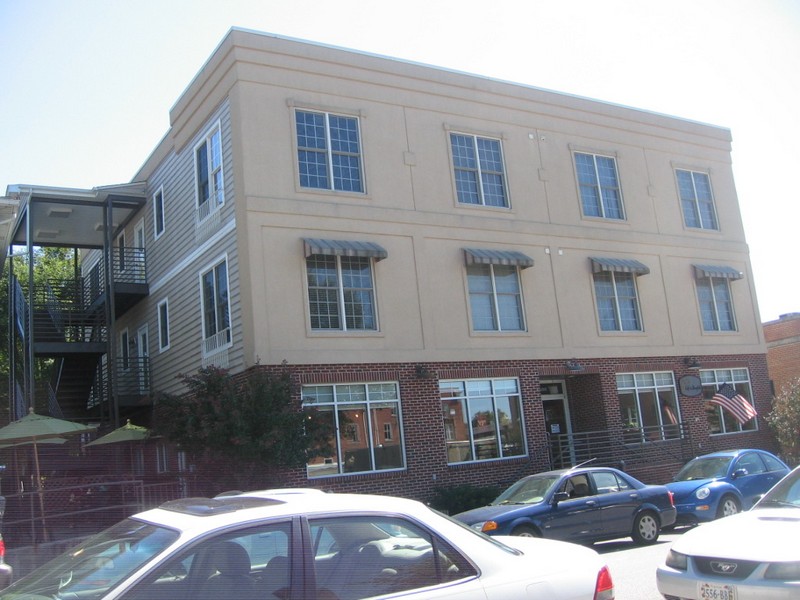 But I can draw conclusions based on what I know about the surrounding area. Blacksburg is unquestionably a college town, hosting Virginia Polytechnic Institute and State University, better known as Virginia Tech, the largest and most recognized higher learning institution in the southwest of the state. With a population of around 42,600 (by the 2010 Census) and a university enrollment of over 30,000 there can be no doubt that Virginia Tech is the lifeblood of the city and region’s economy. 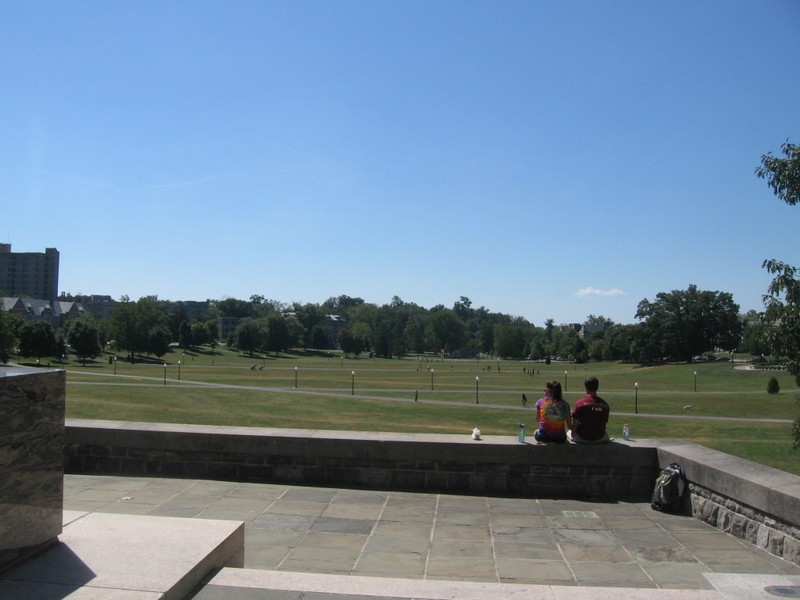 College towns are typically more amenable to densification of the built environment than other communities of similar size. And densification is exactly what it would appear this building has achieved, since it is obviously a newer structure than either of its neighbors; it was inserted in the vacant lot between them. 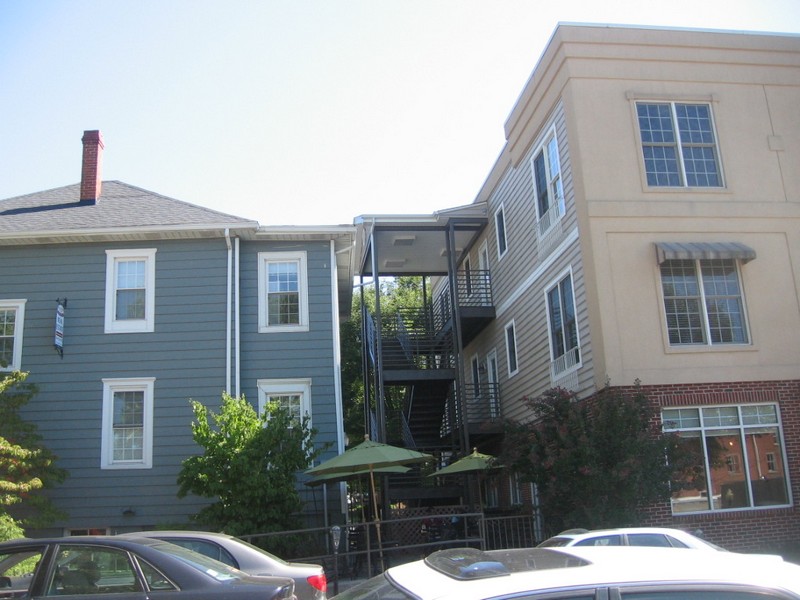 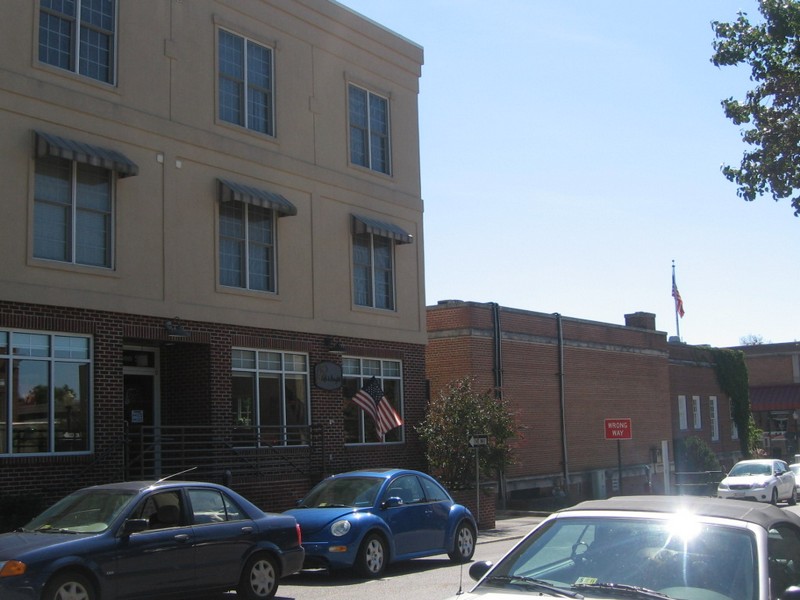 The sociological conditions here are simply suitable for infill development: the large student population results in a significant constituency that will only live there for a limited time and does not usually concern itself with the long-term impacts of developmental changes, particularly if they occur outside the campus boundaries. Students are rarely homeowners in towns like Blacksburg. In addition, they are far less likely to be vehicle owners: while I saw plenty of cars clearly registered under University parking, the fact remains that, common to most campuses, a preponderance of students get around by foot or bicycle. A pedestrian dominated city is more likely to see further density as an asset (one additional building that is within walking distance), and the increased density is just as likely to attract bicycles and walkers as it is to attract cars.

I’m not entirely certain on the developmental aim of this building. The fenestration doesn’t make it a dead giveaway as an apartment on the upper two floors. Though that’s what I expect it to be, the building doesn’t advertise itself as apartments, which could have proven a mistake in a city filled with renters. Why be subtle about it in an area where apartments are rarely stigmatized? Conversely, the different pattern of windows, the wooden signage, and the shaded patio seating all suggest that the first floor hosts some other retail use. The one jarring feature of this structure is the fire escape: 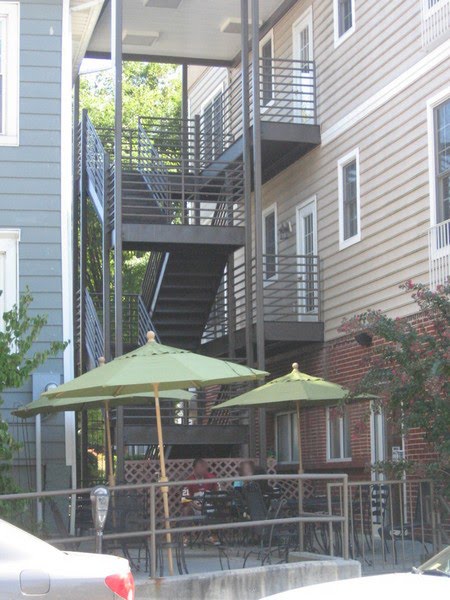 Fitting it between the new building and the adjacent blue house was quite a challenge. As one of the earlier photos reveals, the eaves of the two structures are butting up against one another. The owners of this house next door would have had just cause to complain about a deteriorated view—if they cared enough. However, I would have guessed this blue house to be a subdivided apartment building, filled with not-too-particular students and run by a landlord who knows that his backpack toting clients are rarely all that choosy. Regardless, this jungle gym of a fire escape also provides an unusual backdrop for patio seating that isn’t likely to appeal to many; the umbrellas offering shade are probably unnecessary most of the time, since a patio wedged in like this won’t usually receive too much sunlight. Wouldn’t it have been better to flip the building 180 degrees, placing the patio and the fire escape next to the shorter, virtually windowless brick structure on the other side? Then again, the targeted student customer does not usually put much stock in aesthetics of living conditions; they have the rest of their lives to worry about that, most likely in another city.

It’s hard to imagine anyone falling in love with this building from an architectural standpoint, yet it manages to offer commercial and (presumably) residential space just a cartwheel away from the campus—in the middle of a block, of all things. By most metrics it would appear to be a successful infill development. It hosts a mix of uses and contributes to Blacksburg’s tax base. And while it is possible that the neighbors subjected it to greater design scrutiny than I’m assuming, one might guess how it would have turned out if a throng of adjacent property owners had nitpicked the original plans due to some of the weaknesses that I have pointed out. Infill might sprout up more easily in a fertile, permissive culture, but the result isn’t necessarily “highest and best” from a design standpoint. Those NIMBYs that developers and planners both like to castigate could very well have steered this project in a far more prudent direction for long-term viability, which is why the development world continues to pursue infill in fiercely protected urban historical districts that support high density, despite the inevitable “Think of the children!” opposition that it nearly always encounters.

PrevBlotting out the by-line.
MONTAGE: Washing and cleansing every stain from the sin of neglect.Next