Blotting out the by-line.

Keeping the theme of gently altered signs, I offer a spray-painted follow-up on the “Huge Condos” blog post from two months ago. Though not as funny as the advertisement in Dayton, this sign manifests a completely different kind of error in judgment pertaining to real estate. For developers with comparatively low dependency on equity partners, with a faith that the development will yield a desirable ROI, with a comfortable debt-to-equity ratio, and with the know-how to operate and maintain (or the capacity to forge a contract with a good management agency) over the ensuing years, it is likely that they will not be as eager to dispose of the property. In other words, the developers will retain title as the property is leased and occupied.

But what if business fortunes take a turn for the worse and they change their minds? In both good and bad economic climates, properties change hands, businesses fold or consolidate. The notion that a single entity will ever own a parcel in perpetuity is farfetched, which makes the decision displayed on this “cornerstone” plaque at a lifestyle center just outside of Montgomery, Alabama all the more bizarre: 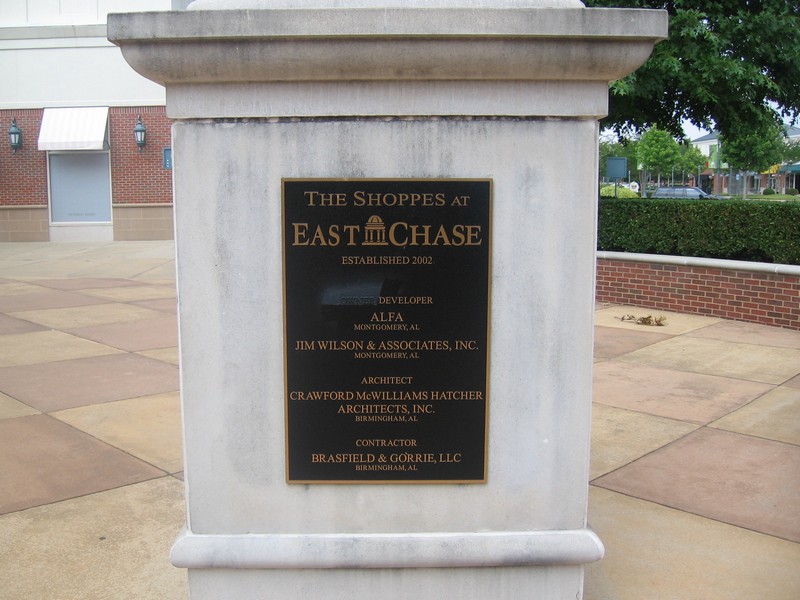 Apparently two firms named Alfa and Jim Wilson & Associates, Inc. developed The Shoppes at East Chase. But they also had a bigger role in the past. 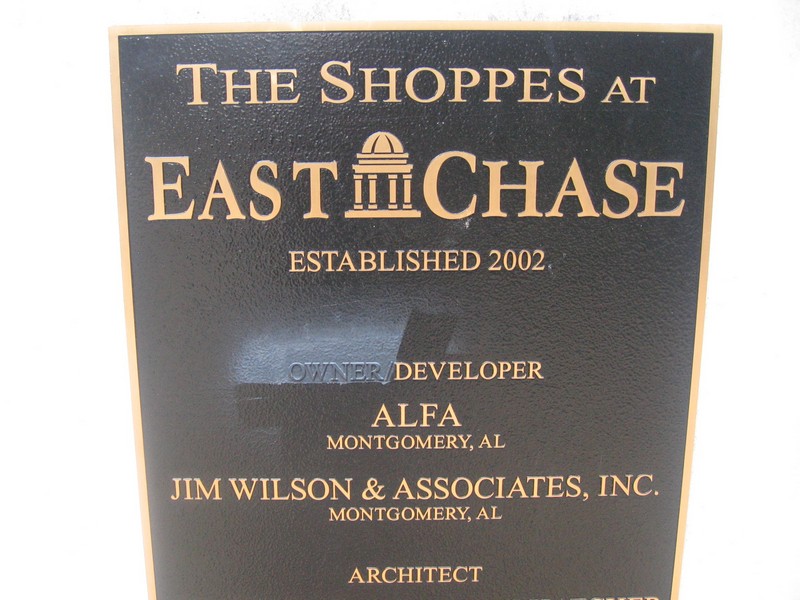 Spray-painted in a somewhat concealing black is the word “owner”, suggesting that this is no longer the case. One or both companies have divested themselves of the ownership role, and someone (the new owner presumably) took the most efficient approach possible to show it. But this action raises two further questions. First of all, why did the owner opt for such a chintzy method of indicating this? Up close, it’s not even effective: anyone with remotely decent vision can see the “owner” marginally obscured through black paint. Is it really that expensive to buy a new plaque? Wouldn’t it be worth it to clarify the key players in the development and management of this lifestyle center, rather than preserve something so obviously spray-painted?

Second, and more importantly, wouldn’t the new owner (the Australian company Centro apparently) want to draw more attention to his or her name? This shopping node, while nowhere near as smartly designed as some new lifestyle centers in comparable southern state capitals such as Baton Rouge or Jackson (a topic I hope to explore at length in the future), still fits the mold for the retail typology that is most popular and successful these days. East Chase itself seems to be doing well enough, poor economy notwithstanding. At the time of my visit in the summer of 2010, it was probably 85 to 90% occupied. And it’s clearly the retail node in metro Montgomery with the healthiest potential. It sits squarely outside the city limits, in the eastern fringe which seems to be absorbing most of the suburban out-migration. Compare this to the more conventional, purely enclosed Eastdale Mall:

This mall, about two miles to the west and on the edge of the city limits, is doing fine from a superficial glance on a bustling Saturday night. All the department stores were occupied and most of the inline stores were filled as well. But many of the most lucrative tenants—middle to highbrow names like Hollister, Banana Republic, and Talbott’s—all fled the larger Eastdale Mall, presumably around 2002 when East Chase opened. The replacements at the older Eastdale are predominantly mom and pop stores, not the sort of thing a major mall seeks in order to ensure steady foot traffic. I’d be very surprised if, 16 months since taking these photos, the Eastdale Mall hasn’t demonstrated more visible signs of decline. Meanwhile, the next highest concentration of retail square footage in the Montgomery metro area is the Montgomery Mall, on the south side of town in the city limits. 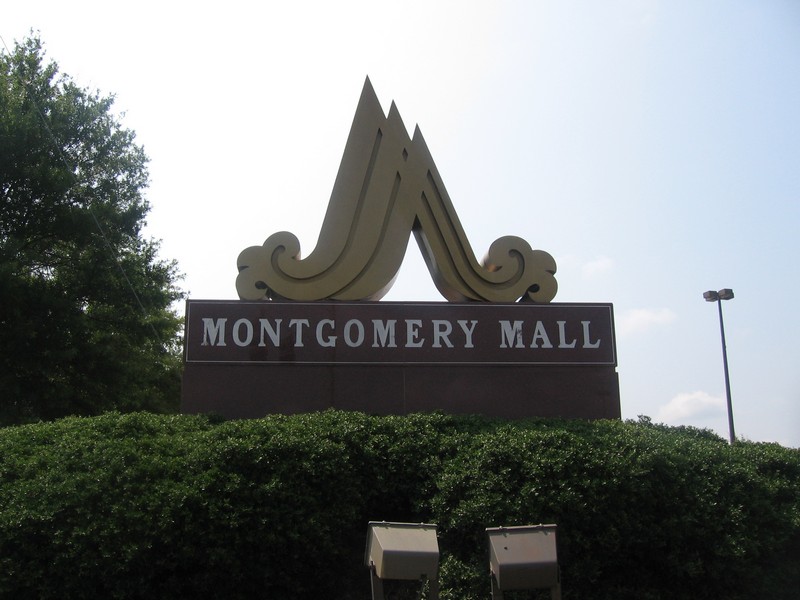 And it’s dead, my friend. 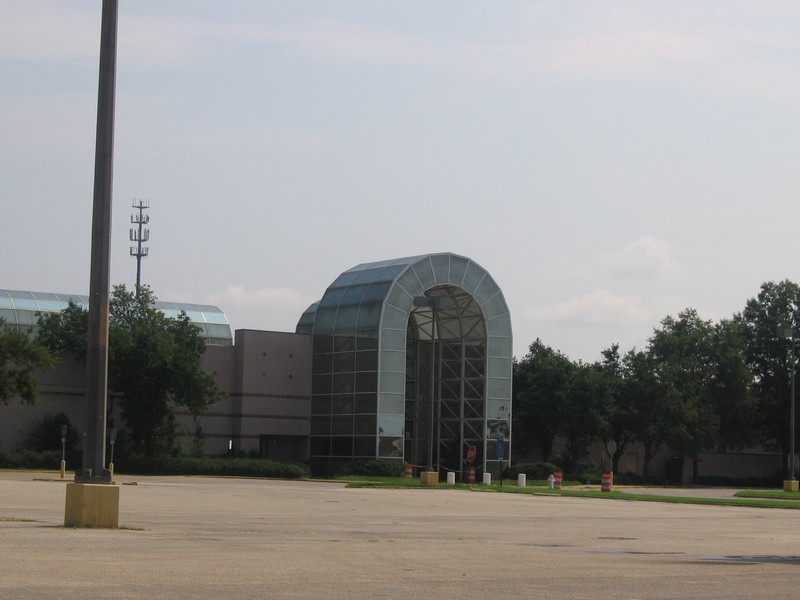 Completely closed. It still appears well-maintained: no graffiti and very little litter, the landscaping is reasonably groomed, and the pavement on the parking lot is not too pockmarked yet. But this could be merely because the Montgomery Mall hasn’t been closed for long, and the shift of retail energy from within the city limits to the eastern suburbs is a gradual process.

But something about that palimpsest plaque at The Shoppes at East Chase is troubling. Perhaps it, too, was a temporary spray-painted solution while a new sign was on order; I just happened to catch the man behind the curtain at the inopportune time. If not, though, and the spray-painted owner is there to stay, then it may be that something is amiss in terms the operations at this most promising of Montgomery’s retail nodes. After all, it struck me as a bit surprising that one of their big-box, “category killer” stores was vacant. 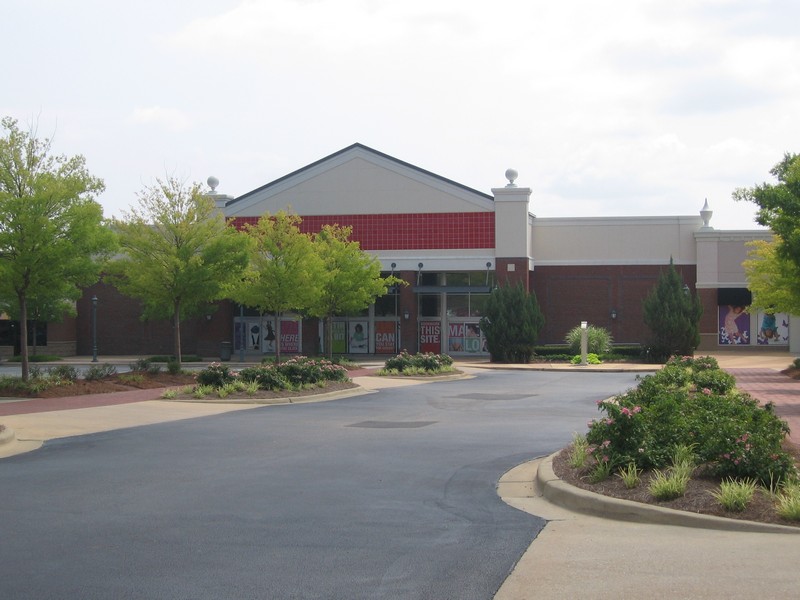 I presume this to have been a Staples, which was not a business known for shuttering a large number of its stores in 2010. The red of the company’s trademark façade may be the akin to the color of the herring I’m following, but the telltale signs of a struggling retail environment in an otherwise healthy metro (Montgomery is unquestionably the most prosperous area in Alabama’s largely impoverished Black Belt region) are the stuff that retail experts and developers use to determine where future expansion should take place. It could be that the nine-year-old East Chase is already past its prime, and another retail hub is in the works, even further out in the decentralized eastern suburbs. Maybe the developer would have enough confidence to hang on to the property a bit longer…or at least find a more adaptable plaque for display.