Work commitments yet again prevent me from devoting time to lengthy blog posts the way I often would like, but maybe this is a godsend for my readers. My previous post on condo(m)s in Dayton managed to arouse more interest than I’ve achieved in some time. One topic from which I have shied for the most part—probably more than necessary—is the aftermath of Hurricane Katrina. Having lived in New Orleans at the time of the storm and a few years after, I have hundreds of personal photos, as well as more provided by some of my enthusiastic readers, which I included in a recent post featuring the Mississippi Coast. Considering the wealth of opportunity I have for featuring the Gulf Coast photographically, it’s time I explore what I know in depth while remaining sensitive to the swirl of emotions that surround this as-of-yet unsurpassed fiasco (at least in the US). And if I don’t have time to be as sensitive and nuanced as I would like, at least I can be brief.  And that topic involves modular homes.

For the vast majority of the US, the words “FEMA Trailer” conjure an image largely supplied through the extensive media coverage in the early years after the storm: a nondescript white RV that can easily hitch itself to a large vehicle. For the million or two in the Gulf Coast sitting directly within Hurricane Katrina’s path, a FEMA Trailer was just a part of daily life. They were everywhere. In metro New Orleans, you would have been hard pressed to find a street block without at least one perched in the driveway or front yard. Only a shut-in could claim not to see a trailer on a daily basis; a huge portion of the population lived in them, sometimes for years. 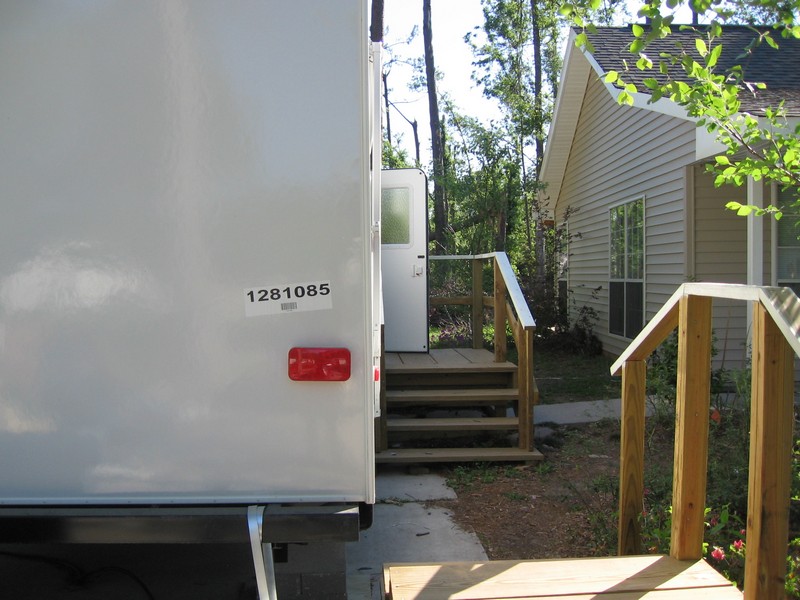 Many individuals suffered losses too catastrophic to justify simply “camping out” in their front yards as they repaired their homes. They had to move into “FEMA Villages”—essentially makeshift mobile home parks. These structures were a fair amount larger and less movable than a trailer.  They’re a bit like hybrids between trailers and more permanent modular homes.  Though funded by the government (either leasing the land—or the trailer pads—from a private vendor, or buying it and installing all the infrastructure), the goal was always for these settlements to transition back to private operation, coincident with their residents rebuilding their homes or by moving permanently into these federal villages. 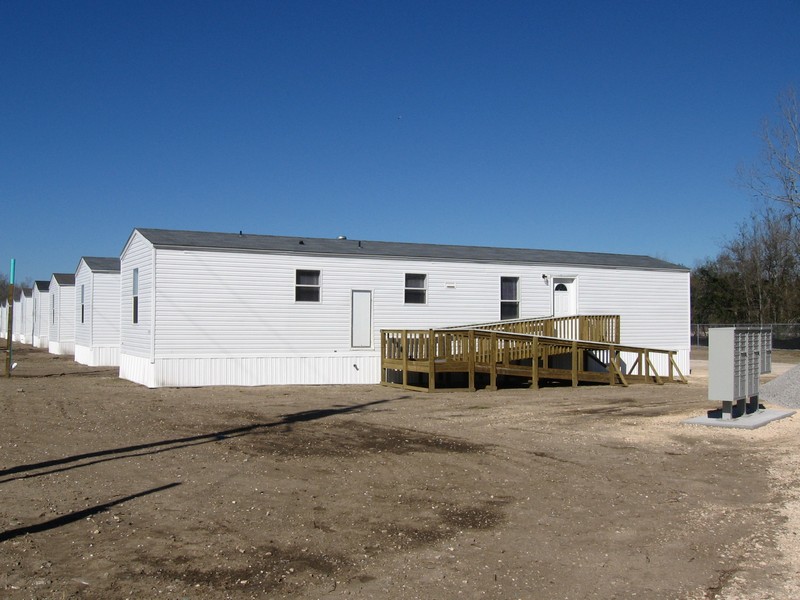 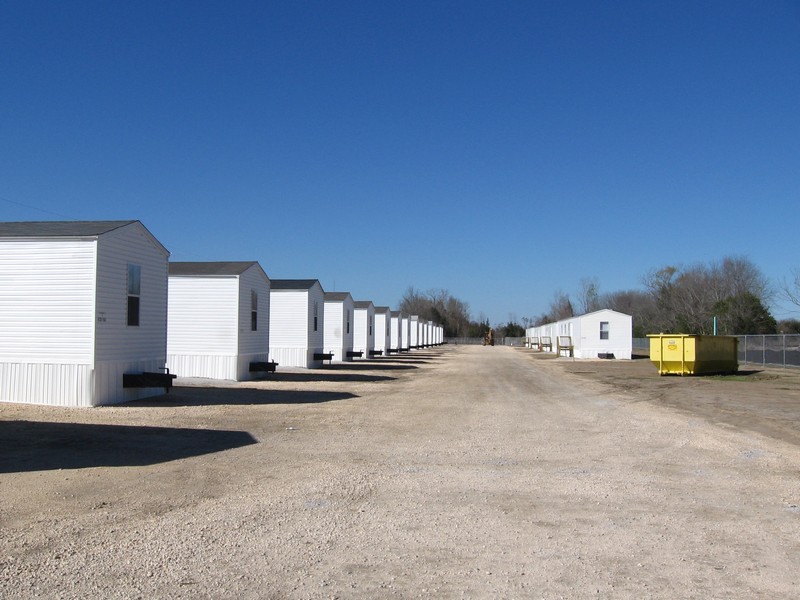 But both the Villages and the Trailers have had their ardent detractors. To many, they were ugly, soulless settlements, more poorly thought-out than New Orleans’ public housing (an achievement in itself) and distributed through an inefficient process. FEMA/Homeland Security built many Villages out of expediency, in places where the land was cheap or readily available, rather than being convenient as a temporary settlement for evacuees. Some of the trailers got lost in bureaucracy and sat languishing in fields in Arkansas, long enough that they could deteriorate. Other naysayers saw FEMA’s Individual Assistance process as a pseudo-solution that fostered long-term government dependency and opportunities for fraud. These critics noted the absence of clearly articulated plans for relocation or eviction after a deadline that the feds pushed back time and time again. The trailers, in turn, were often so flimsy that they’d succumb to the next major storm, resulting in further squandering of public dollars. And individuals on both sides of the political spectrum criticized the sudden public health/public relations debacle two years after the storm, when studies revealed that the levels of formaldehyde were enough to trigger serious and often dangerous respiratory allergic reactions.

Accompanying this pound of cure, however, was an ex-post-facto ounce of prevention. The seemingly sloppily administered government aid after Katrina elicited a variety of smaller, frequently for-profit initiatives attempting to rectify some of the problems posed by FEMA housing peppered liberally across the Gulf Coast by offering alternatives. Various companies attempted to tame Americans’ general aversion toward concrete as a primary construction material in housing, touting its resiliency and low cost of maintenance. Private consultants devised ways to engineer FEMA villages under neo-traditionalist principles so that the infrastructure installed could support desirable long-term mixed use developments vaguely akin to the much ballyhooed resort community of Seaside, Florida (popularized through the movie The Truman Show), after the trailers and mobile homes moved out. Neither of these proposals took off—in fact, they left such a meager ripple that most internet search engines would yield nothing. Slightly more successful—and a non-profit venture—were the aesthetic alternatives to FEMA trailers known as Katrina Cottages: cheery, affordable little structures built much more durably than typical mobile homes, intended to withstand strong winds, offer highly efficient storage as an antidote to small square footage (usually under 700), and in keeping with the architectural vernacular of New Orleans’ pastel single shotgun homes. One city in particular, Ocean Springs, Mississippi, pioneered the Katrina Cottage community by leasing a few acres adjacent to downtown to host a small cluster of these much heralded residential alternatives.  They’re modular homes, even if they’re far too aesthetic to carry the stigma of modular homes. 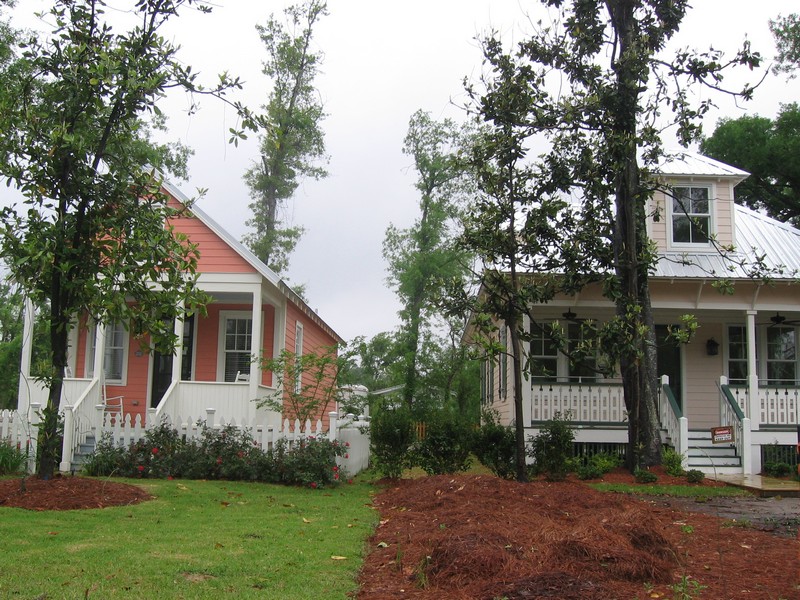 The Katrina Cottage was a drop in the bucket amidst the flood of federal housing assistance (an ill chosen pun, I know). It could hardly compete as anything more than a niche market when it had only a fraction of working capital of such juggernauts as FEMA and HUD. But Ocean Springs also hosts the innovative, privately initiated solution I saw last summer, five years after the storm, when most other affluent homeowners along the Gulf had either fully rebuilt or thrown in the towel completely. But this home just blocks away from the Mississippi coast was still undergoing repairs. 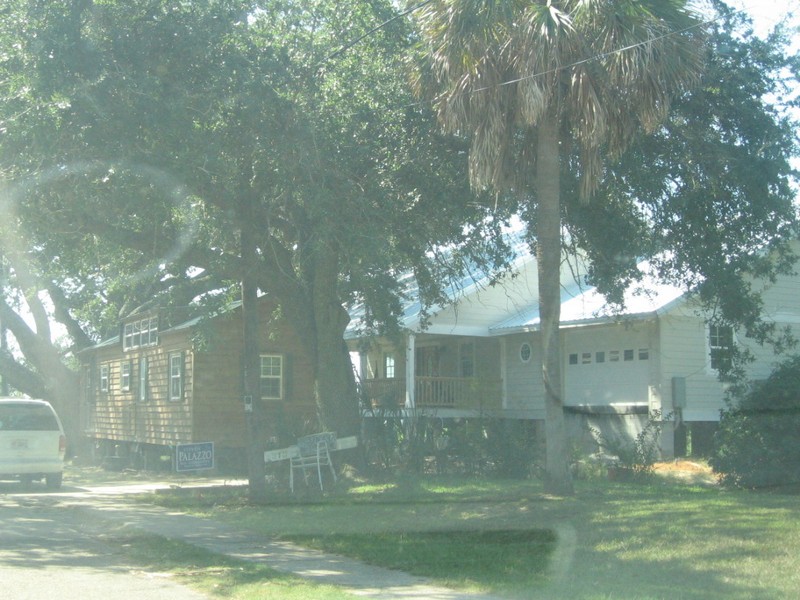 The glare from my car’s windshield doesn’t help things, but the configuration is the same one you might have seen on the Gulf Coast just two or three years earlier: a mobile home poised in the middle of the front yard, with the permanent home partially hidden behind it. Approaching it from the other direction better reveals the relationship between the two structures: 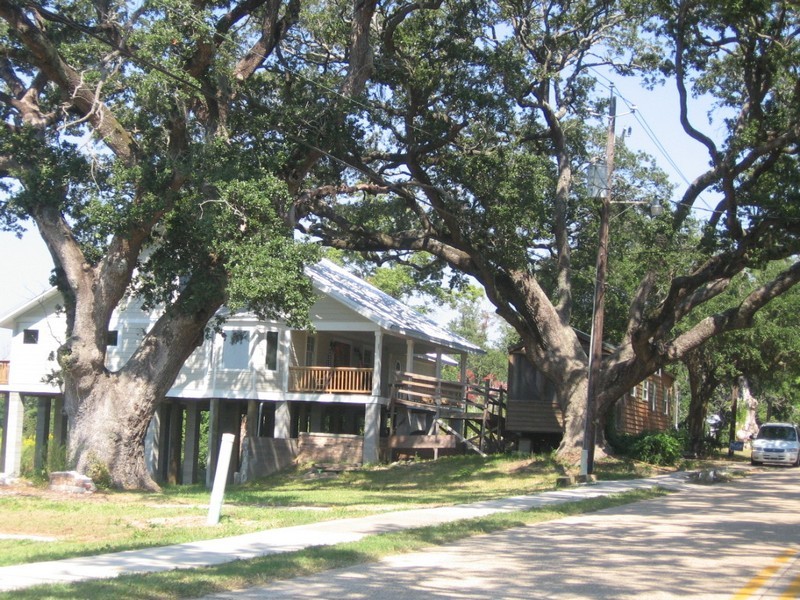 This home is close enough to the water that it clearly could be influenced by violent storm surge; it might even be vulnerable to an uncommonly strong tidal surge. The elevation of the foundation is probably nothing new—most houses nearby have been raised—but the length of the supportive piers is probably greater than before. The first of the two photos reveals that the garage was a conventional one, which, it would appear, the unusual elevation has now rendered useless as a carport. But the most notable feature here is that modular home out front. By most judgments, it looks a far lot comfier, sturdier, and more attractive than a FEMA trailer. Could the homeowners have been inspired by what they saw elsewhere in Ocean Springs, through the winsome Katrina Cottages less than a mile away? I can’t help but think so. It’s highly likely the improvements to the main house no longer have anything to do with disaster recovery. After all, Katrina struck five years prior, and the deadline for Individual Assistance applications has long since expired. Still, the owner may have liked the approach of living off his or her infrastructure on personal property while making significant changes to the home. Those homeowners with the wherewithal for something nicer are likely to seek an upgrade from the spartan, formaldehyde-laced FEMA trailers. The result is a structure like this: still highly efficient but much easier on the eye, and probably more durable too. And it is likely far more movable than the average modular homes. 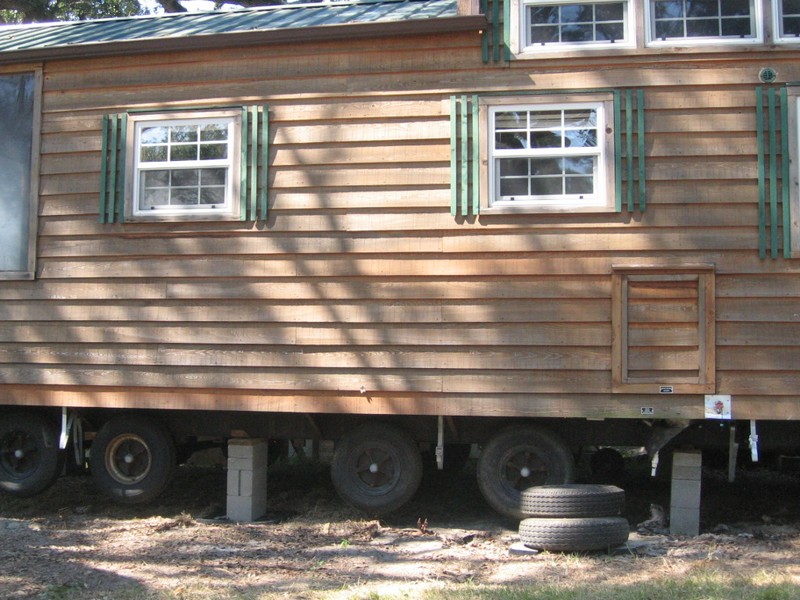 The clichéd crisis/opportunity dichotomy can’t help but ring true. Not only does it take a cataclysmic event to shake the populace out of complacency (which is precisely what we had become in our relation to hurricane evacuation and general emergency preparedness prior to Katrina), but it takes further muddling through the solution to discover that a mitigating approach would have borne more utilitarian fruit in the long run. Although the median home size has shrunk over the past few years (for the first time in recorded US history), we aren’t yet exactly considering the Katrina Cottages, much less the modular homes, as the typical piece of the American Dream. But we are coming closer to parity than ever seemed possible before the bubble burst. Average household sizes have been shrinking for decades: since more people live alone, it is probable that they will, at least in aggregate, demand less space. The Katrina Cottage or the smartly accoutered FEMA trailer may someday seem less like an idiosyncrasy and more like a brilliant act of foresight—a widely cheered solution within a persistently dour housing market.

One thought on “Modulars get modern.”