I’m back from a lengthy time away from Afghanistan and have been trying to drill down another blog article that incorporates infrastructure from several different countries, as well as the implications on American energy efficiency. But, as is often the case, a shortage of good, specific photos has become my Achilles’ heel. I will acquire the remaining photos that I need before too long, and that article is already more than halfway complete, but until then I offer a novelty for my blog: a montage in which I didn’t take a single one of the many photographs. I must give heaps of credit to Nici English for providing me not only with the pics—taken hastily from her car through the driver’s window, just as I would do—but also with the background information on a subtle but interesting subject: curb jumping. 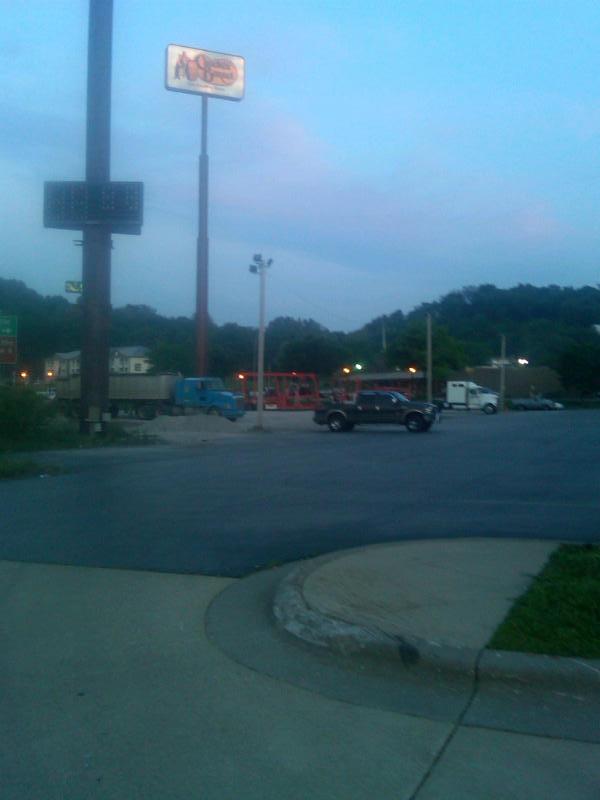 Notice anything? I probably wouldn’t have either. But our star photographer understands the trucking industry firsthand and can clearly spot what I would have completely ignored. 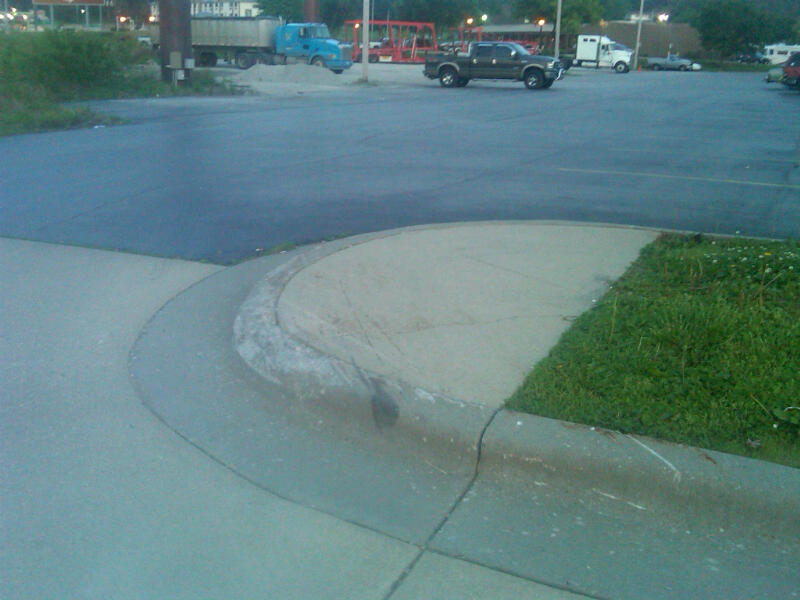 More than one vehicle has attempted to negotiate the turn into this Cracker Barrel outside Caseyville, Illinois, but it would take a heck of a heavy car—and a painfully inept driver—to cause the sort of skimming of the edge of the concrete that you see here. But for a trucker, it’s much more understandable. The weight they support and the extensive spatial judgment that they require will inevitably result in some slip-ups. And thus…curb jumping.  The semis parked in the background of the above photos indicate that the area consciously accommodates truckers; no doubt the property owner also expected the sharp turns would pose problems for some in the industry and paved the edge of this curb in order to minimize landscaping damage—which, in turn, results in a damaged curb.  Better concrete than grass.

Most curb jumping, corner-cutting and the ensuing curbside damage comes from a single culprit: the inexperienced trucker, negotiating a space that is simply too small. Understandably, a trucker’s ability to handle such a lengthy vehicle only grows through time and experience; more surprisingly, the vast majority of truckers do not last six months in the industry after an initial training with a tractor trailer. According to English, my online expert, even among the largest trucking companies (Swift, JB Hunt), it would be reasonable to assume that 50% of the drivers have less than half of a year of experience. The result? Lots of scratched curbs, stripped corners, and shredded landscaping.

Many property owners in high truck traffic areas have learned to anticipate these vehicular assaults on their pavement, grass, and landscaping; they have devised a sort of defense. Not surprisingly, a Motel 6, also in the Caseyville area, obviously has to contend with curb jumping quite a bit. 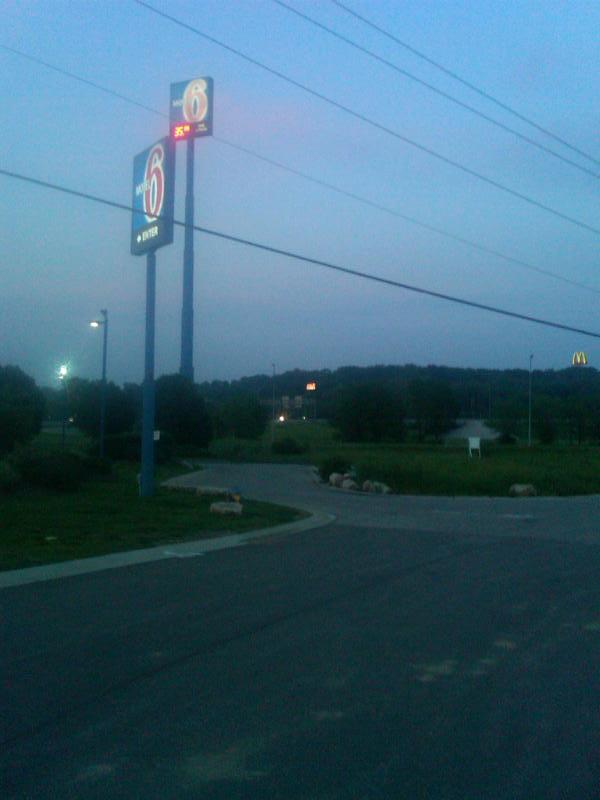 Large rocks planted at the corner serve the same purpose that they do in residential neighborhoods—to deter motorists who make that turn carelessly. In some cases, these boulders do more than just preserve landscaping aesthetics; they save a valuable piece of infrastructure, such as the fire hydrant below. 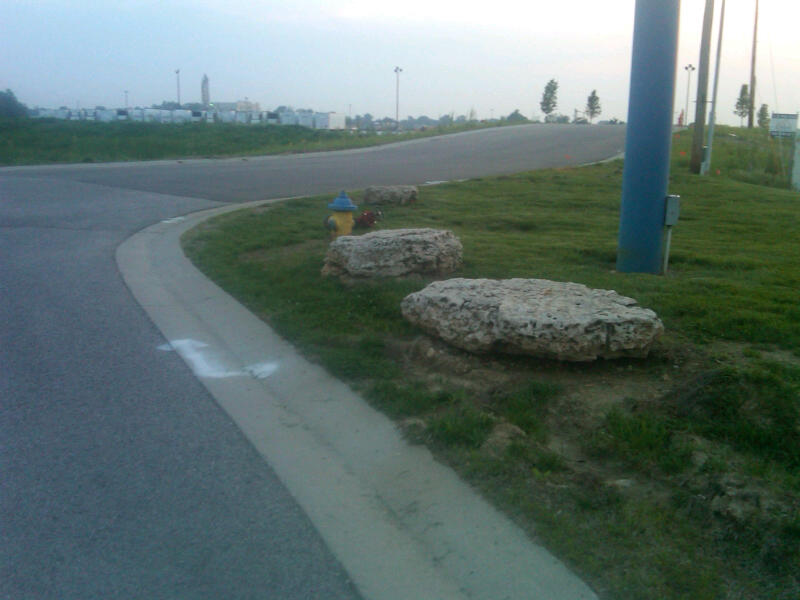 The above photo shows the Motel 6 from a different angle—one with a visible drop yard for trailers in the background, which explains the need for such extensive fortification. On the other side of the street, the property owner has chosen a more aggressive—and, in my opinion, uglier—barrier for curb jumpers. They look like overturned bollards, and they seem to be safeguarding what is likely a fragile little engineered wetland. 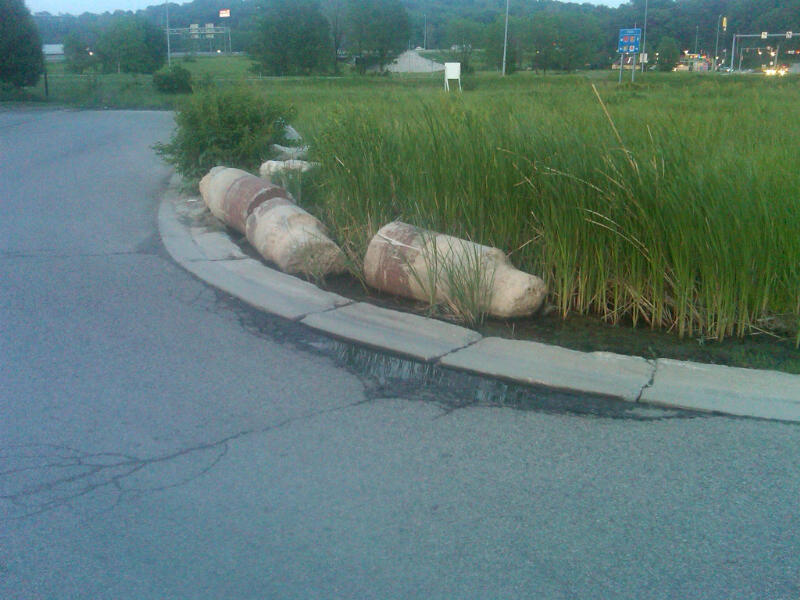 Not surprisingly, these rocks are particularly prominent at motels along highways that would prove popular destinations for truckers. Here’s an installation near Grenada, Mississippi, where the more prominent positioning of the rocks suggests that they are not there just to deter curb jumping but to alert truckers of a tight corner—which, I’ll admit, pretty much amounts to the same thing semantically. 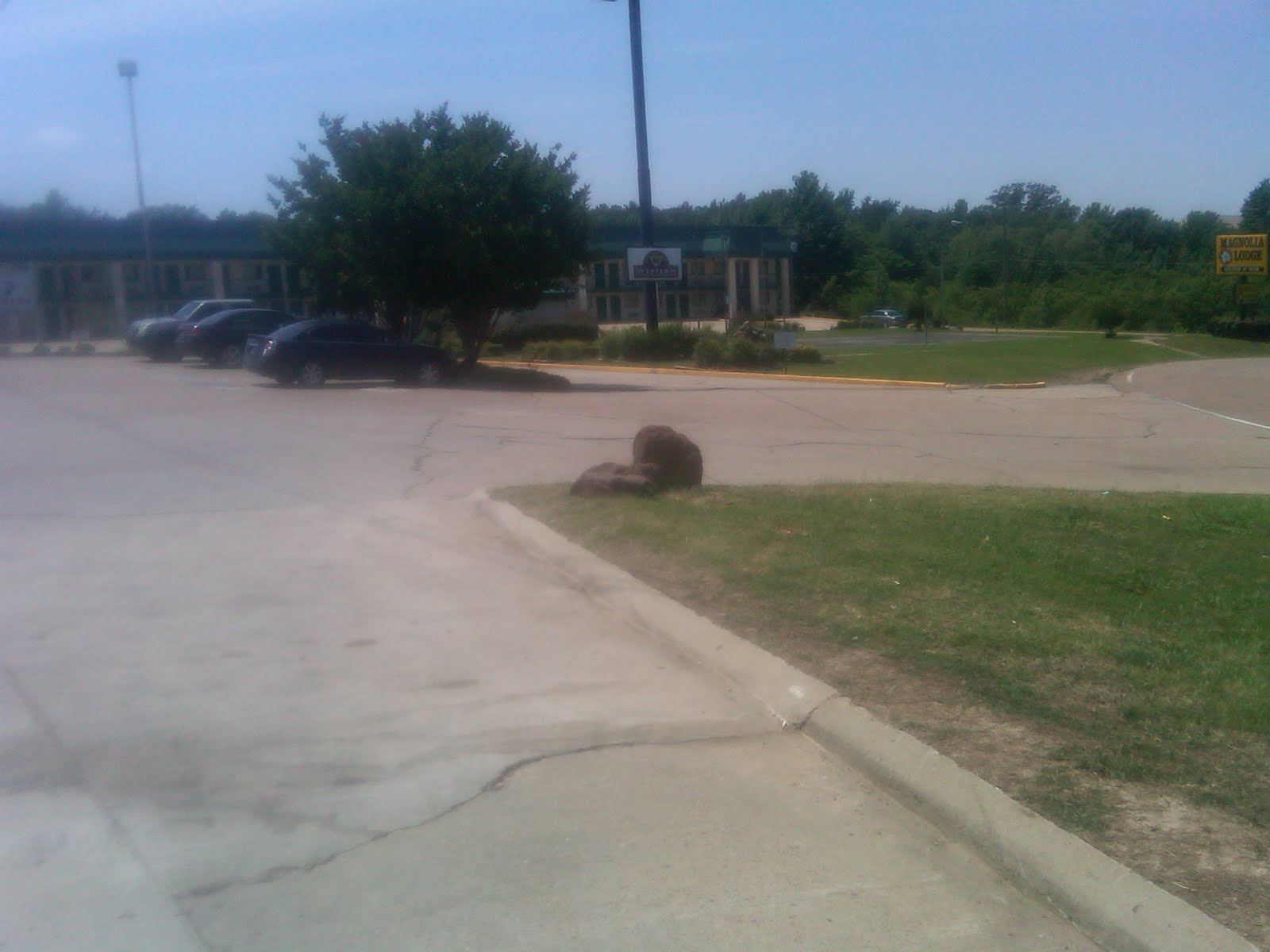 The absence of barriers can often prove more harmful than merely tearing up a patch of grass. A particularly clumsy trucker clocked this light post outside a Caseyville hotel while trying to turn a corner. 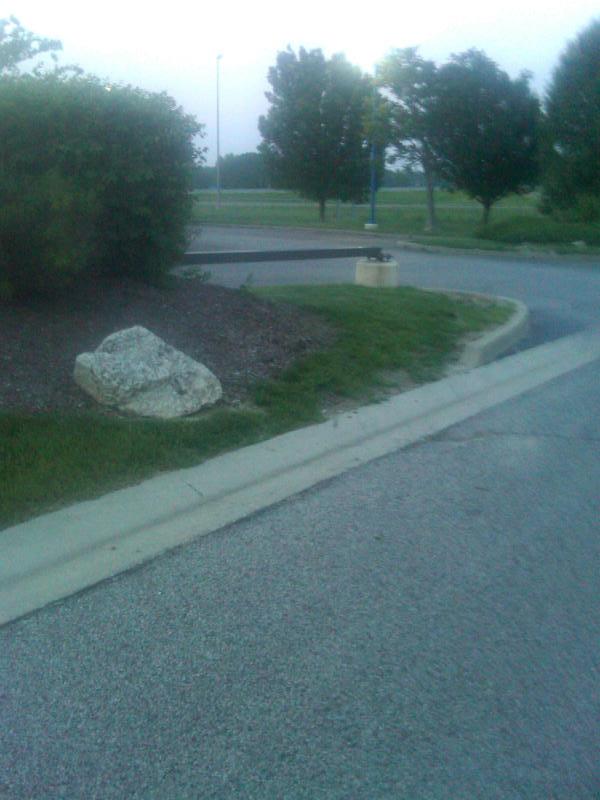 Viewed from a different angle, it is clear many other drivers scoured the grass along the curb before one took it an increment further. 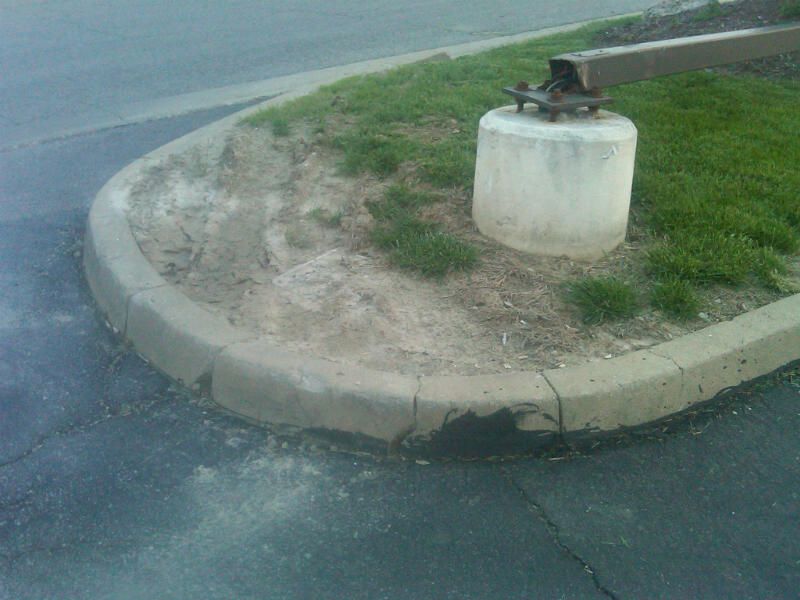 Understandably, state and local governments have not improved every road in these often rural environments to the degree that it has a curb. The absence of a curb would make it difficult if not impossible for a trucker to notice when he or she has turned too sharply. 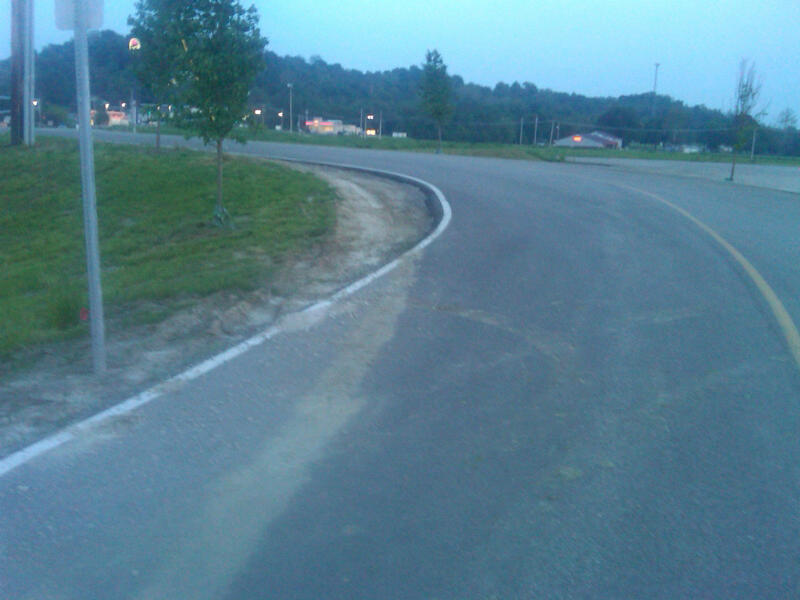 The example below, again from Caseyville, shows what appears to me like a more serious accident waiting to happen: a curbless street near a trailer drop yard, in which the drivers skimming over into the verge can come within a hair’s breadth of clipping that thick yellow cable. 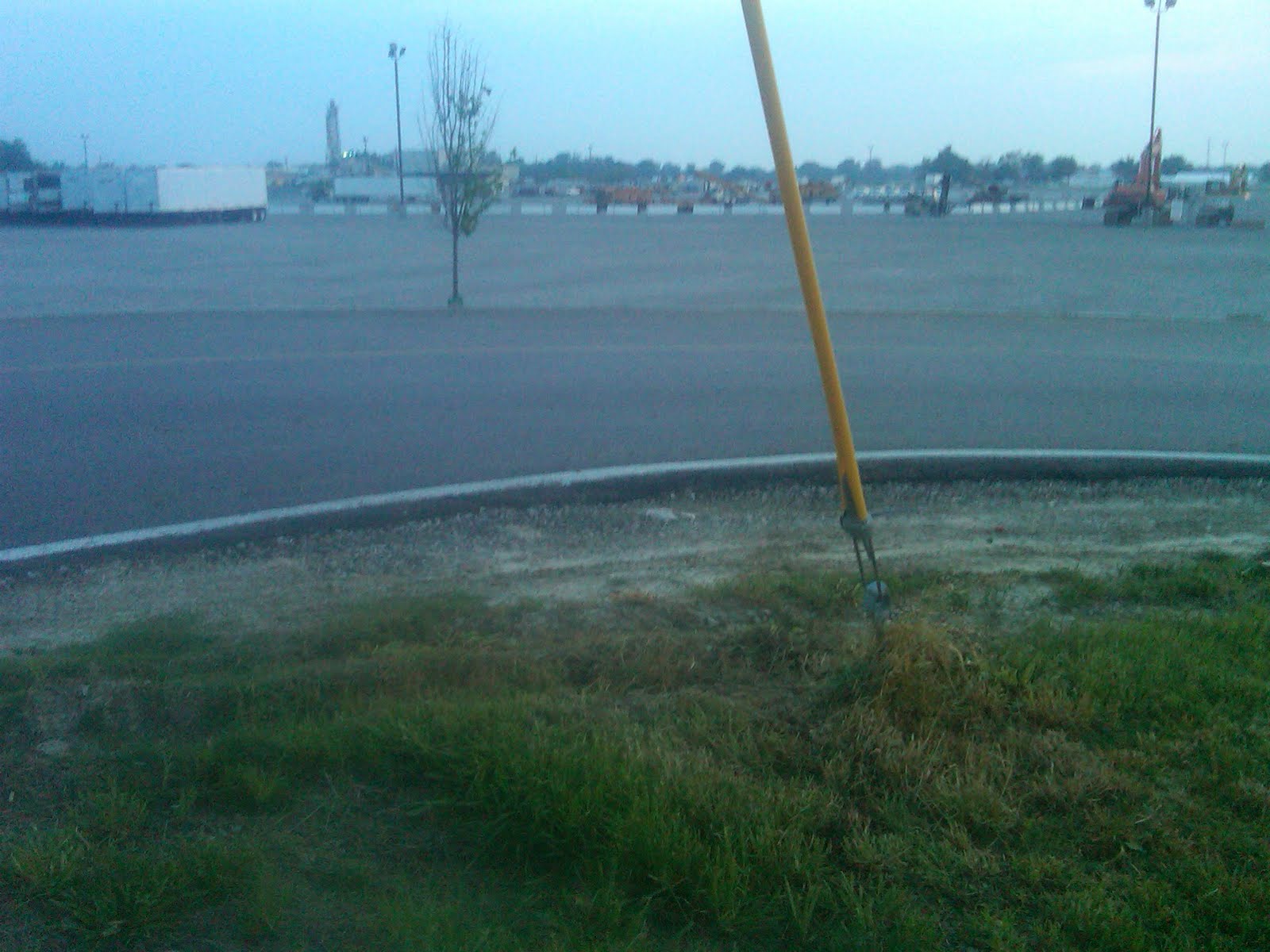 The cable could be stabilizing a number of tall objects—a power line among them. Bollards or rocks placed right along this curve would be a cheaper and most likely more effective solution than building a curb: the introduction of an unexpected obstacle–a protrusion, perhaps even something resembling a cairn (like this one, only much smaller will suffice)–is far more likely to attract attention than a continuous curb that a trucker could cross complacently.

Putting the alliteration aside (in a minute), the trucking technique that tries to obviate the tendency for curb jumping is known as button hooking. We’ve all seen it on the back of trailers: “Caution—this vehicle makes wide right turns.” The blog entry on Hub Pages by Omniscient Nomad illustrates this effectively:

As Omniscient Nomad explains, in Figure A, the driver did not allow himself or herself sufficient time and space to prepare for the right hand turn, at an intersection where the engineered turn radii are too small and tight to accommodate tractor trailers. In these instances, the fishtailing trailer may cross into three (if not all four) lanes in an intersection of two-way streets, forcing other drivers to back up to give enough room. Figure B shows a correct button hook, minimizing the likelihood of curb jumping or concurrent calamity by colliding with cars nearby.

The trucking industry may seem like it owns the road, but, as all of us have seen (even if we don’t always notice) trucks are generally subject to many higher restrictions than conventional automobiles, whether it be through weigh stations, restricted tunnels, or lower speed limits.  And the acquisition of a Commercial Drivers License (CRL) requires considerably higher standards than a conventional passenger vehicle.  The regulations affecting truckers may also include outright prohibitions, such as this mildly ironic sign near Durant, Mississippi. 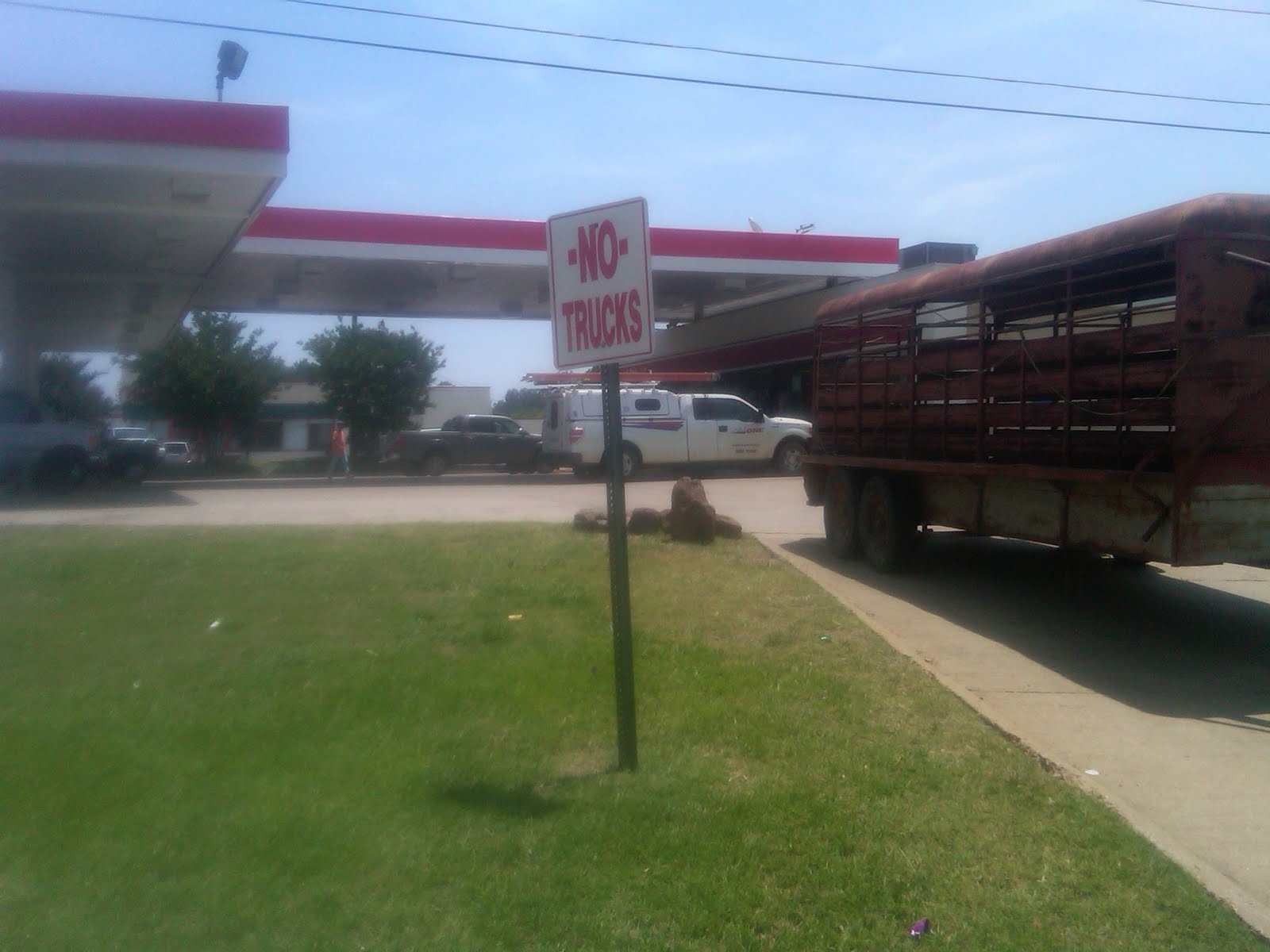 The owner of the gas station has determined the space is too constrained to allow for trucks—but not for livestock trailers, which are approximately half the length of a conventional 53-foot commercial trailer.

And another bit of near irony with trucks and signage rests outside Osceola, Arkansas: 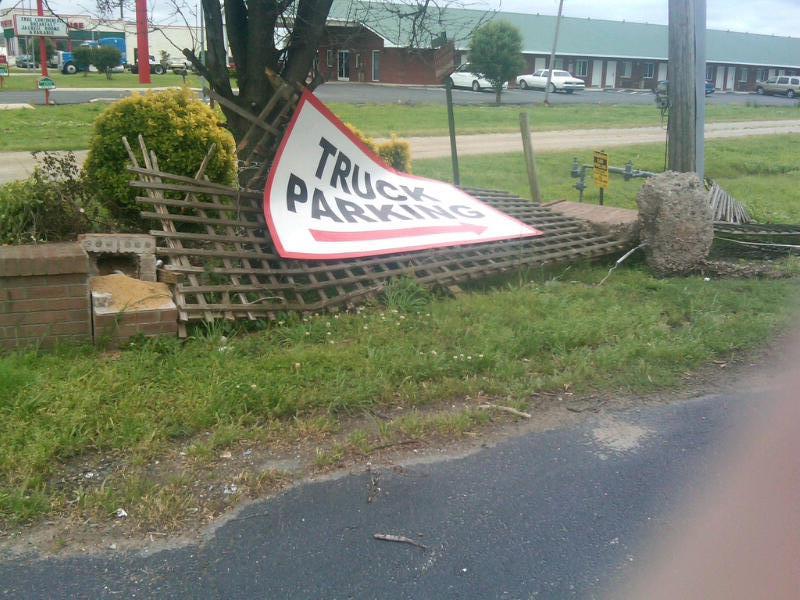 Alas, it was a storm and not a curb jumper that took this one down. How do we know? The landscaping below it, while unkempt, is hardly mangled. Trucks are not exactly the most benign presence on America’s roadways, but they would likely prove a lot more threatening if they could ascend, accelerate, maneuver, or halt with the same freedom and abandon as virtually every smaller vehicle can do. Rocks, curbs, and bollards are a modest remedy to a curb jumping problem that is equally modest, especially in light of tractor trailers’ capacity for both destruction and amazing productivity across American roadways. The gestures of semis are big, so it is apt that something so comparatively simple could be explained metaphorically through a mere button.

4 thoughts on “MONTAGE: Curbing destruction by rethreading the button.”