DUST: Pedology 101, Part I – Worth a name change to http://dustafghanistana.blogspot.com?

While topography can pose a variety of impediments to human settlements, we have attempted to overcome or at least tame most of them over the years. Whether it is overcoming the propensity for flooding in a mountain valley, dredging a swamp to capitalize upon a critical river arterial, or precariously perching a structure atop a precipice with high tendency for mudslides, architects and engineers (among others) have transcended the perceived limitations of this malleable earth to satisfy what often prove to be ephemeral demands for civilization, and what constitutes “ephemera” and “civilization” are so subjective that I withhold judgment as to whether we have domesticated our craggy wilderness. But we’re strivers. And as a result, Homo sapiens are more broadly dispersed across various climates, ecosystems, and altitudes than just about any other member of the animal kingdom. Not all environments are equally suitable for habitation, though, as is inevitably proven by certain critical global nodes: the Yellow or Ganges River Valley, the Niger Delta, the broad coastal plain of Benelux and northern France, the northeastern Megalopolis sandwiched between the Atlantic coast and the most rugged of the Appalachians—all of these regions harbor far more condensed settlements than Siberia, central Asia, the Sahara Desert, Antarctica. And then, of course, vast stretches of land fall between these two density extremes, including my current home in northern Afghanistan. This landlocked nation in southwest Asia is neither small nor sparsely populated; though still incredibly rural, both the population and land area are comparable to that of the US state of Texas. (Texas is a bit larger and has about 10% fewer people; thus, Afghanistan is more densely populated.) But few people would manage to describe the prevailing environment in Afghanistan without using the word “harsh” before too long. The country juxtaposes some of the globe’s most rugged mountain ranges alongside arid plains that qualify as desert, even if the appearance isn’t conventionally desertlike.

But little of it fits the most stereotypical depictions of deserts, particularly visible in the broadly Arab belt that stretches thousands of miles to the west of Afghanistan. It isn’t a desert, exactly—at least not one that I have seen, and the biggest distinguishing factor is the baffling, often infuriating soil conditions in the country. In the almost half of a year that I’ve lived here, I’ve visited bases in the south, the east, and—for the most part—the northern edge, and the soil all falls under a characteristic that people here routinely call “moon dust”. 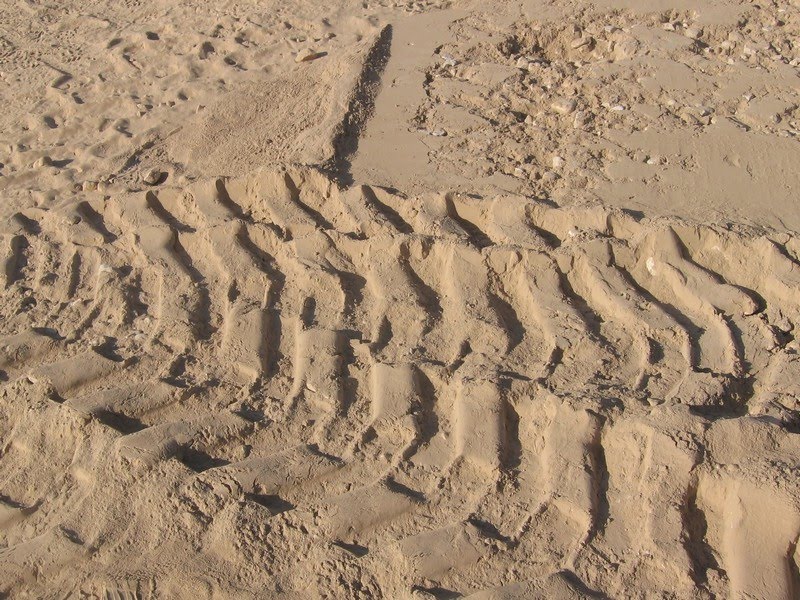 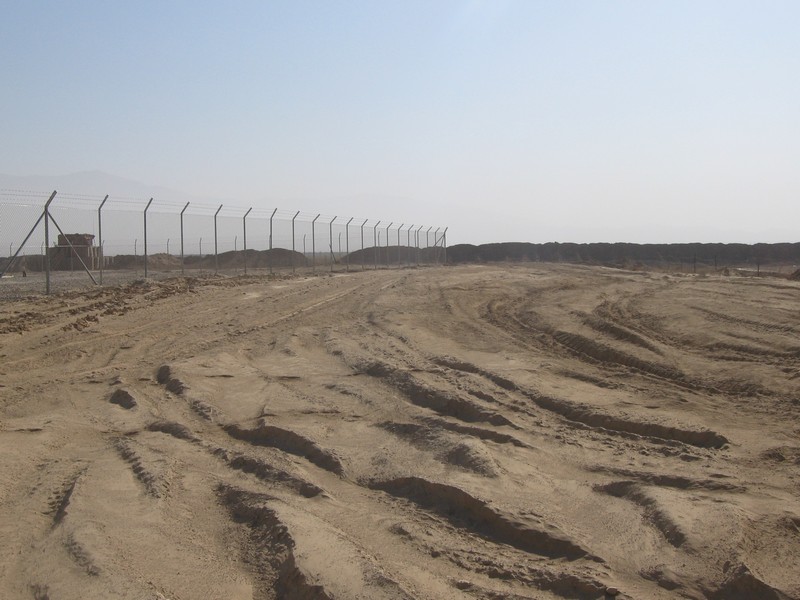 With some geospatial data from the US Department of Agriculture, I was able to re-create a map of all the various soil regions of Afghanistan, with an inset traced in bright blue on the central portion of the Province of Balkh where I’m currently living: 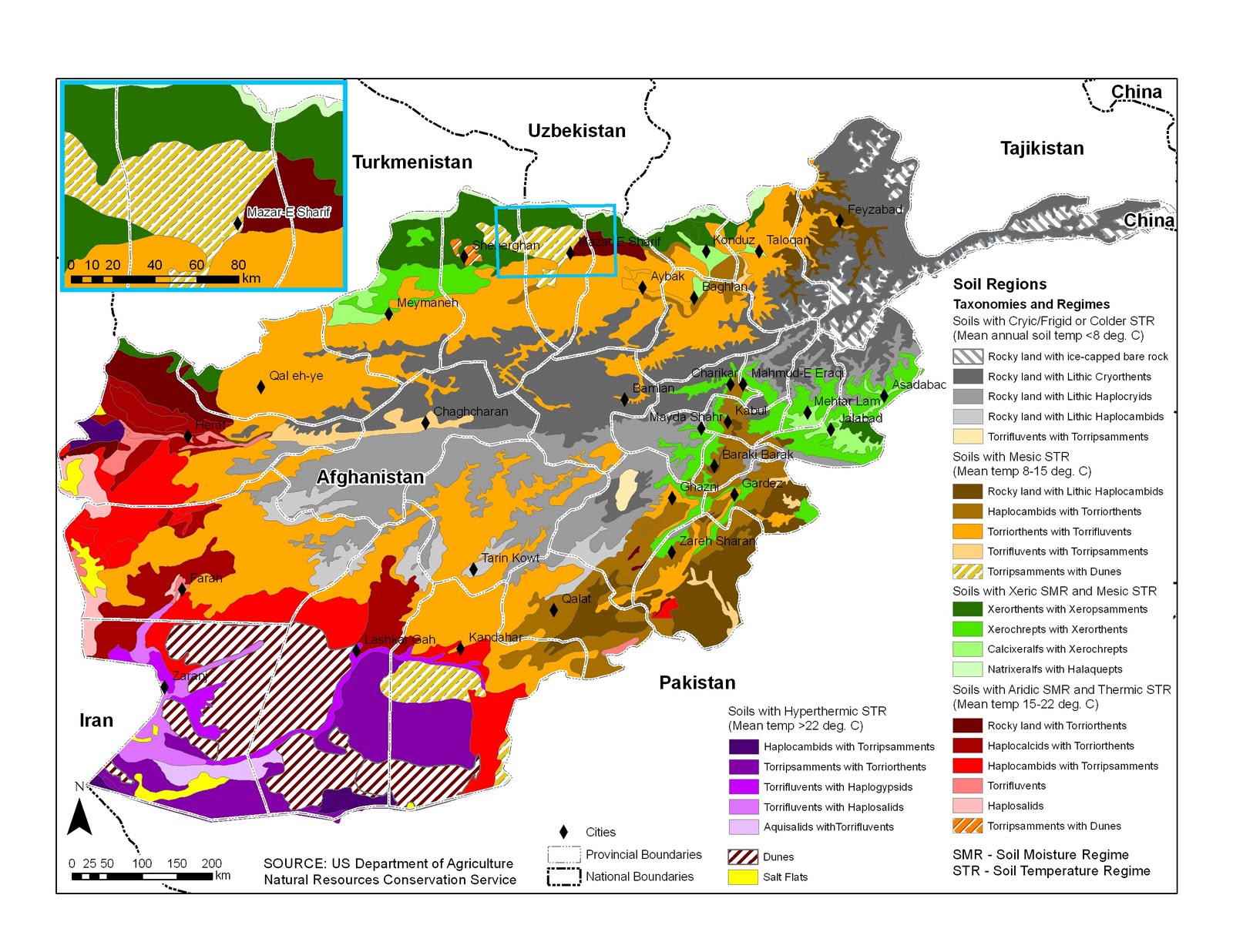 The original USDA map upon which mine is based can be found here. It may be less accessible to begin this lengthy blog entry with the clinical description of the implications of Afghanistan’s bizarre soil, but it helps to get the quantitative stuff and the hard science—or at least what little I know of it—out of the way so that I can back up the quantitative with far more expressive photos. Essentially, the Mazar-e-Sharif area falls under three fundamental soil regions:

All three of these classifications fall under the mesic soil temperature regime, which implies a moderate mean temperature, though “moderate” is particularly misleading in a desert environment like Afghanistan. The soil earns this mesic quality primarily through the mutual nullification of relatively cold and extremely hot conditions, sometimes achieving both in a 24-hour-period as is reflected in the considerable differences in air temperature between day and night throughout the year. Thus, moderation in Afghanistan hardly suggests an arched or peaked bell curve when depicting temperatures; this isn’t a Brazilian rainforest. The kurtosis on an annual probability distribution of temperatures in Afghanistan would be high, so the soil is exposed to scorching heat of 110°F (43.3°C) almost daily during the summer months, sometimes exceeding 120°F (49°C), while routinely dipping below freezing at night in the winter, while occasionally falling as low as 15°F (-9.4°C). Throughout the year the temperature fluctuates across more than forty degrees Fahrenheit over the course of a typical day—not exactly a suitable, lengthy growing season for too many plants.

So what happens to a soil in which climate extremes are the norm? The flora of Afghanistan doesn’t just seem to lack diversity; it often seems to be missing altogether. The soil is devoid of visible life for much of the year, as this photo from just outside the wire can attest. 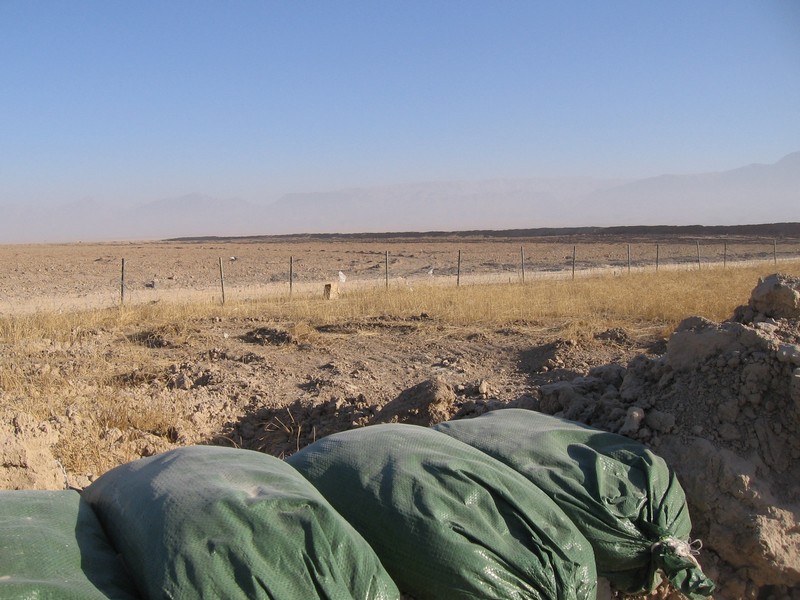 An etymology of those tongue-twisters used to describe the soil regions above can help shed some light on why the landscape is so austere. I’m no pedologist, so I have to work primarily by delving into the terminology through the resources I have at my disposal (such as pedosphere.com ), which are often only slightly less meager than my pre-existing knowledge. However, research of pedology allowed me to decipher the component parts of these cumbersome words, as well as how they relate precisely to the prevailing soil moisture and temperature regimes. Most of the aforementioned classifications fall into the most precise classification within the taxonomy: the great group, nestled within the suborder, which in turn is nestled within the order. Thus, it’s to easiest start the analysis with the least precise category and build from there.

Most great group classifications consist of compound words in which the second half is the suborder. Therefore, torripsamments with dunes (beige and white hatching on the map) belongs to the Psamments suborder, which in turn is one of five classifications in the Entisols order. According to the Cooperative Soil Survey, Entisols are relatively recently developed soils frequently found where alluvium is deposited after any major flood event in a floodplain, or areas where bedrock recently was exposed. Any of the soil suborders and great groups falling under Entisols should share a common characteristic of comparatively recent inception. The suborder of Psamments describes any Entisol with less than 35% rock fragments, characterized by loamy fine sand known for its friability. The torri­- prefix featured in the suborder indicates that the moisture regime is aridic (torric), and the reference to dunes naturally implies that these powdery characteristics facilitate the formation of sand ridges, no doubt caused by the often powerful westerly winds.

The second classification, torriorthents with torrifluvents (orange on the map) straddles two suborders. The Fluvents suborder falls under the Entisols order as well, but unlike Psamments, Fluvents have no real lithic, densic (high enough density to inhibit plant roots except in cracks), or paralithic (rocky but with breaks and fissures) contact within 25 cm of the mineral soil surface. Thus, Fluvents are comparatively free of qualities that would inhibit plant growth and can be comparatively fertile if flood cycles do not coincide with cropping periods. They also must have a slope of less than 25 percent and a temperature regime that is either cryic (mean temperature lower than 8°C but no permafrost) or warmer. According to the Encyclopedia of Soil Science (Ed. Rattan Lal, 2006), Orthents are the most extensively occurring suborder among the Entisols. They defy attempts at scientific horizon development, due to their steep slopes, permanently situated non-weatherable materials, and high erosion rates, thus explaining their commonality in desert and mountainous environments. Since both Orthents and Fluvents both fall under the Entisol order, this classification would suggest an alternation of fertile and highly unstable soil in alternating patterns, both of which are young in their development.

The final classification, rocky land with torriorthents (brown on the map), again involves the Orthents suborder, which, in turn, falls within the Endisol order. The juxtaposition of rocky land with the Orthents indicates soil that engages with superficially exposed rocks at steep angles, suggesting both instability (propensity for erosion) and a low capacity to support plant life, both of which undoubtedly go hand-in-hand.

Sifting through the words that recur amongst these definitions, one can better assess the prevailing conditions around Afghanistan’s fourth largest city: arid, loamy, powdery, rocky, unstable. With the exception of the Fluvents suborder, very little of the soil characteristics would seem to support life, an assertion which boldly ventures into the other branch of soil science—that of edaphology, the direct relation between soils and the corresponding flora and fauna.

But rather than expound upon taxonomies of which I have only a passing familiarity, this essay will benefit far more through some real, empirical meat and potatoes: active descriptions and demonstrations of how Afghan soil operates among human systems, complete with vivid photographs. I commend those of you patient enough to wade through the science, as interesting as it may be to some, because the bulk of this analysis has far more to do with how we—Americans, Afghans, coalition forces—engage with the soil here.

Dry and easily airborne—such is the nature of Afghan soil. But those analogies scarcely account for the tremendous repercussions of building a temporary settlement such as a military base in an area where the soil is often loamy and friable. The dust is relentless, as demonstrated by the trees in the photo below from Bagram Air Field, one of the lushest parts of the country that I have seen: 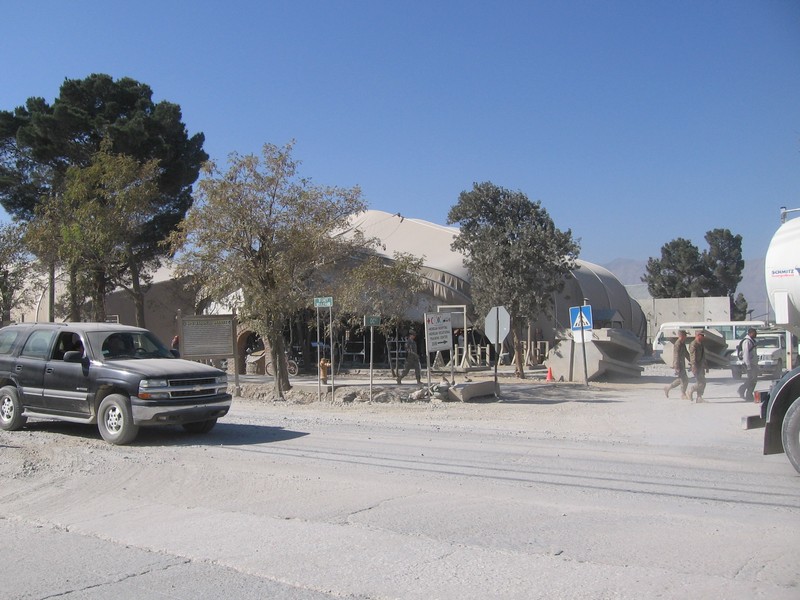 I have no reason to believe these trees are anything but healthy, and yet, like all flora in this region, a sepia membrane dulls the green, making them appear sickly. And it doesn’t take a great deal of imagination to speculate how easily the soil-powder makes its way indoors; the accumulation under this desk provides more than enough evidence: 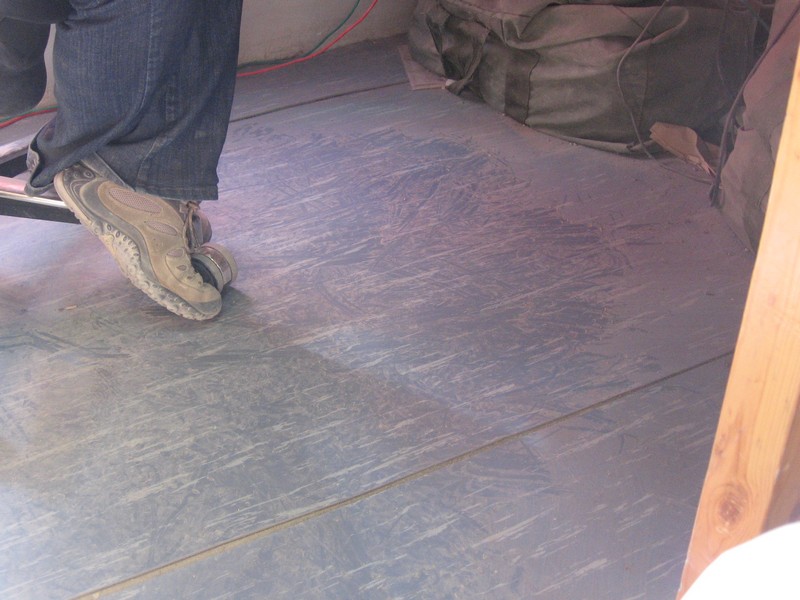 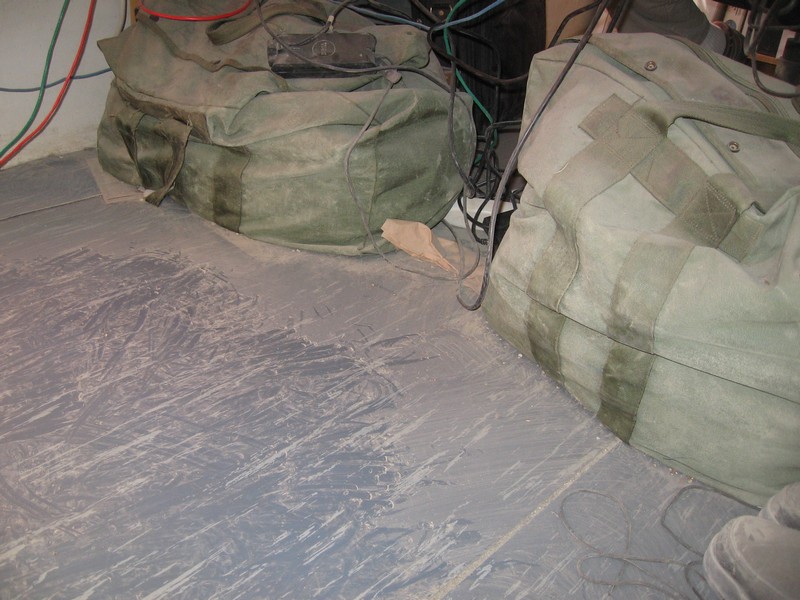 If I were to demonstrate accumulation through a day by day progression, I’m sure it would render the conditions here even more vivid. But let it be known that what would pass for six months of undisturbed dust particles in temperate North American environments would only take about two weeks around Mazar-e-Sharif, in northern Afghanistan. In Kandahar and southern Afghanistan; it’s even worse: less than a week to achieve the thick powder on all interior flat surfaces. Down there, the gritty feeling on the skin resumes just minutes after one washes his or her hands.

The second half of this lengthy essay will explore in much greater detail and with far better photographs the repercussions of life in a place where the soil makes things virtually unlivable. I don’t intend to complain or turn it into a tirade; obviously we and almost 30 million Afghans have to make do with what we get. But as humans almost instinctively subjugate the lands around them, some settings clearly pose greater challenges, which certainly help to explain widely variable regional differences in economic development. With a series of images so closely chronologically tied as to almost serve as a flip-book, I hope to offer a taste of life amidst some of the globe’s greatest hinterlands.

3 thoughts on “DUST: Pedology 101, Part I – Worth a name change to http://dustafghanistana.blogspot.com?”