When Disney’s main street is the last man standing (without support).

I was hoping at this point to begin a new article on the effect the climate has on the soil here in Afghanistan. Mid-March being the peak of the rainy season here, I figured I’d come up with some demonstrative photos and explore the ramifications that rain has on human habitations here. But so far, Mother Nature has thwarted my efforts: we’ve had nothing but unexpectedly warm, sunny, and dry weather this entire March so far, so I have no photos to offer as proof. I’m not yet concerned. We’re bound to encounter a thunderstorm eventually, here at the northern edge of the Hindu Kush mountain range. The rainy season doesn’t usually end until mid-April. And when we do get that rain, I promise I’ll deliver an article analyzing impacts of precipitation on Afghan soil. Try to contain your excitement.

In the meantime, I return to the States to visit a familiar topic: the “artificial” removal of the vast majority of a structure while preserving the façade. I use the word “artificial” with some hesitation—thus the quotes—because this act, usually (clumsily) called façadectomy, has become so commonplace that it’s almost a natural part of many re-emerging historic urban environments. In most instances, the façade is propped up while the developer builds something else behind it—usually an entirely different building with a floor plan that meets modern demands. Thus, the process is predicated upon the notion that everything about the structure is obsolete except the way the front of it engaged with its surroundings (i.e., the street and adjacent buildings). And in many cases, it is. The entire building would have met the wrecking ball otherwise; keeping the façade allows building and its immediate surroundings to retain a simulacrum of salvaged history. Preservationists usually frown at the façadectomy practice, no doubt because it taints the integrity of this discipline by implying that the veneer is what really matters. A façadectomy implies that the essence of the building—its ability to enclose specific human activities—is expendable, tossing most of the refinement of true preservation out the window and reducing it to a cosmetic exercise. Conversely, anyone preparing a rebuttal to a criticism of façadectomies would argue that the façade really is the most important aspect, while building interiors often undergo far more frequent surgeries over the life cycle of a building. Rare is the National Historic Landmark that enjoys preservation inside and out, so salvaging the just the façade—the one part that the vast majority of people will actually see—frequently succeeds as a cause célèbre in populist preservation. Thus, the “ectomies” continue.

But what happens when the developers salvage the façade, only to replace it with nothing? I first noted this occurrence early on in the life of this blog, when it took me by surprise on Memphis’ Beale Street. For several of the structures along this popular, touristy entertainment hub, the façades are all that survive. If a visitor passes through what used to be an entrance, he or she encounters a courtyard featuring a restaurant and bar. 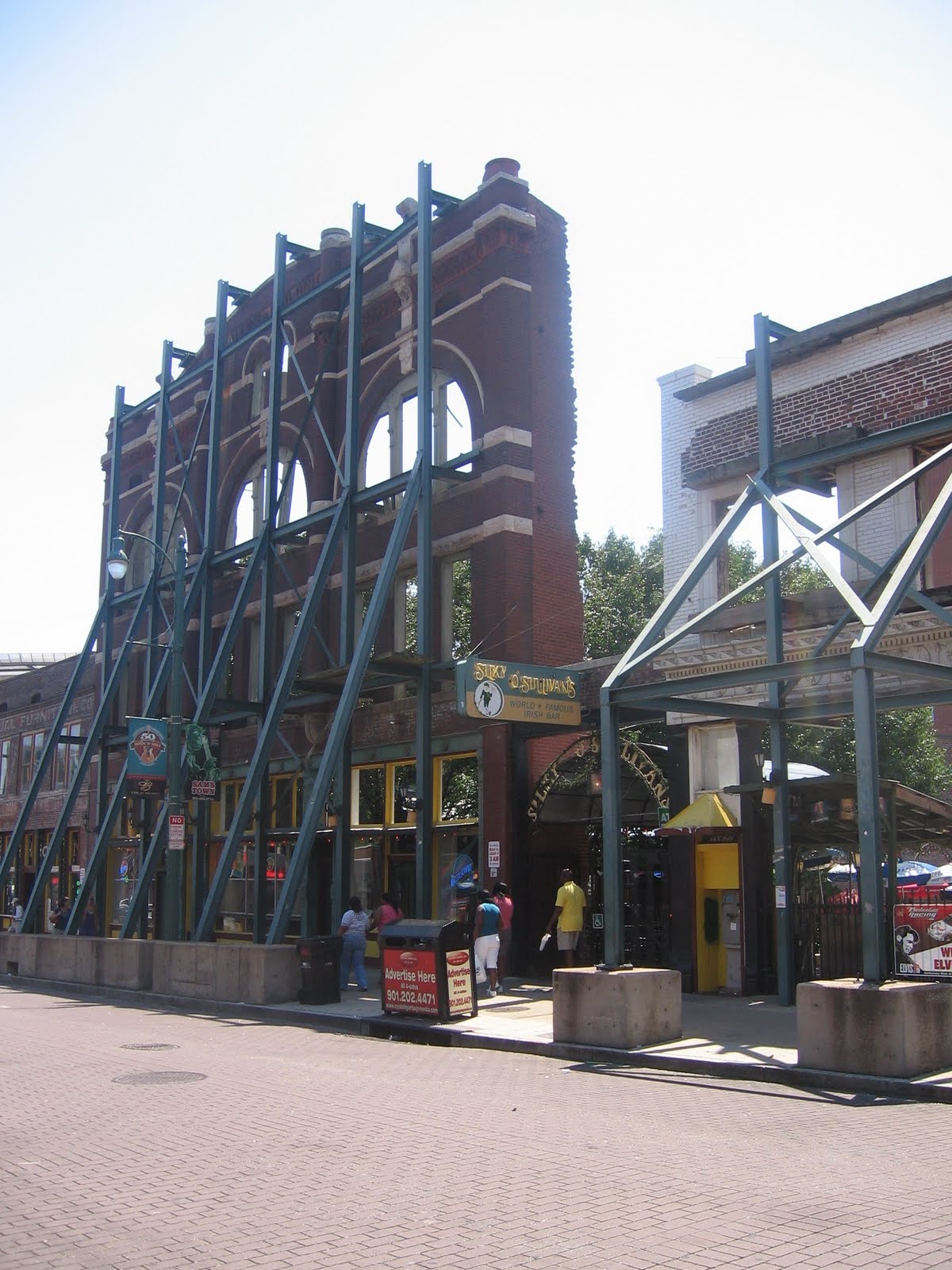 But from the outside, it doesn’t look remotely like a building: the girders supporting the structure make no attempt at subtlety; the masonry where the rest of the building was demolished is still jagged and irregular; the windows are just gaping apertures without glass. It looks like exactly what it is: a brick sheath suspended in an upright position. From a greater distance it’s a bit more convincing, and it retains the essence of a contiguous street wall—the classic old-fashioned main street with a storefront at the ground level and apartments or offices on the floors above. As much as I hate sneering Disney analogies, the illusion Beale Street hopes to create is not unlike Disneyland’s Main Street, which in itself is a specious paradigm since Disney’s corridor owes its vibrancy to a captive audience and its imperviousness to conventional urban blight. Beale Street is vibrant too, no doubt due more to its loose alcohol than because it still harbors a genuine blues community, or many of the Street’s actual buildings for that matter. From a distance, Beale Street looks like the real deal. But up close, it’s like Pinocchio hoping to become a real boy (alas, another Disney analogy)—the semblance of a building that depends on a human presence to animate and legitimize it.

Keeping this in mind, I was less surprised when I encountered a similar practice in Mobile. Alabama’s southernmost big city, and probably the one with the most distinctive vernacular architecture, has an emergent entertainment corridor in the form of Dauphin Street, a remarkably long main street (over ten blocks) for a not-so-large city. 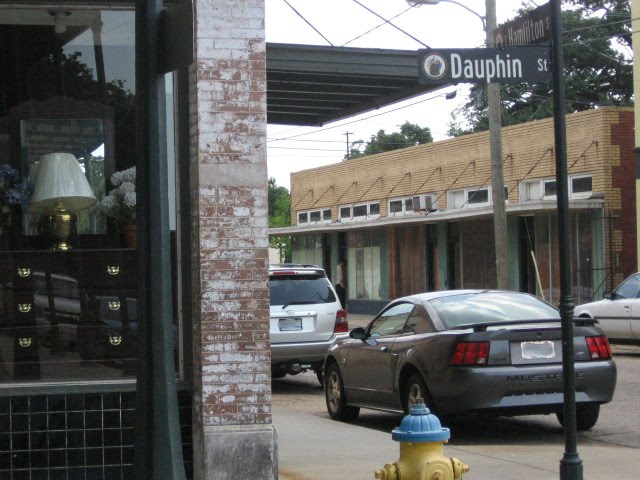 Unfortunately, it’s difficult to determine whether the Dauphin Street corridor is enjoying a rebirth or a decline. Vacancy was pretty high on a summer 2010 visit, with some surprising shuttered storefronts: 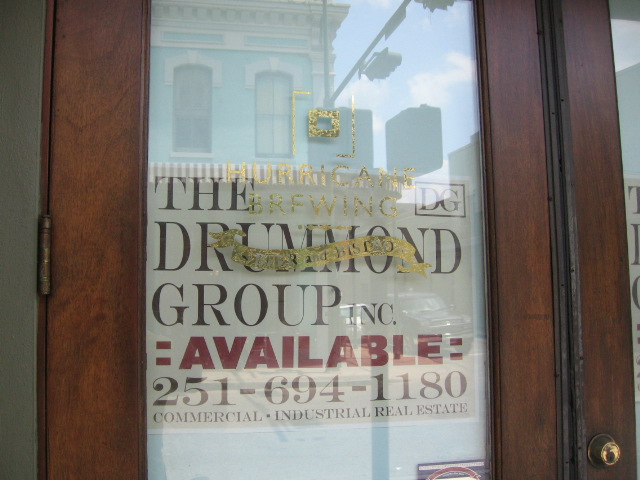 I know we’re long past the microbrew craze, but at least one should survive on the primary entertainment spine of a metro of over one quarter million. Mobile didn’t appear to have one in business. And the surest sign that Dauphin Street isn’t hot property is the presence of a storefront church: 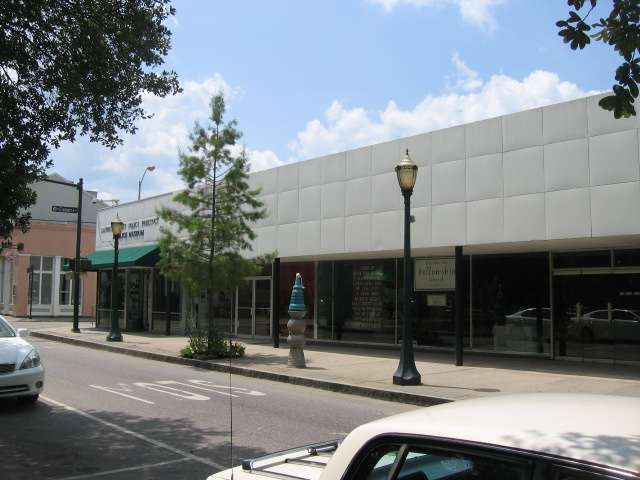 I’ve blogged about this a ton in the past. If you see one of these, you can rest assured that the landlord is hard-up for any tenant and rents are low—especially in an area that most likely is trying to attract high-energy, revenue generating debauchery more than piety. 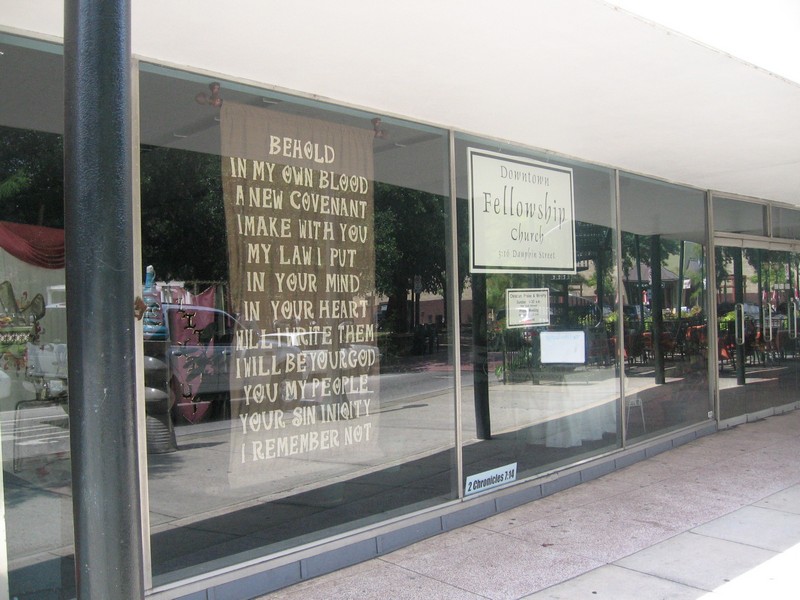 But I don’t want to knock the town when it’s down. Like much of the Gulf Coast, the Mobile area suffered significant losses from Hurricane Katrina, and some of the vacancies might be residual consequences. The fact remains that Dauphin Street almost exclusively features locally owned businesses, and the eyesores alternate in equal measure with streetscapes like this: 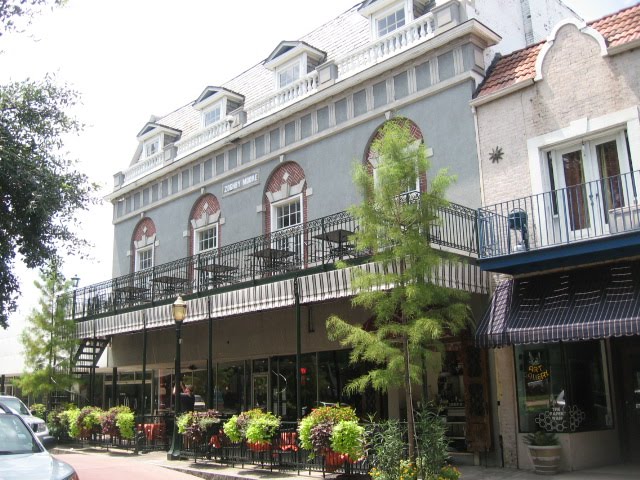 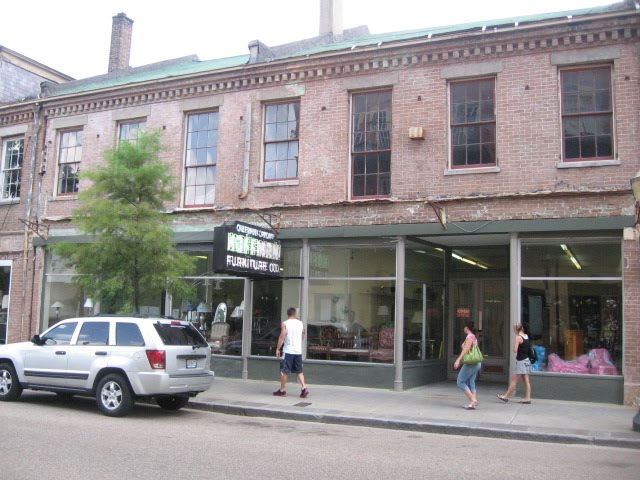 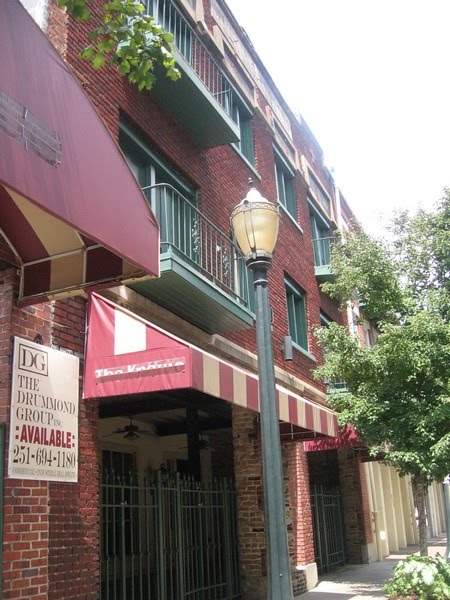 The establishment in that last photo (probably a restaurant) may be out of business, but the building itself appears well-maintained. None of the grillwork on the balconies is rusted, so it probably hasn’t been shuttered for long. But a trick camera angle is the only thing retaining the duplicity here. 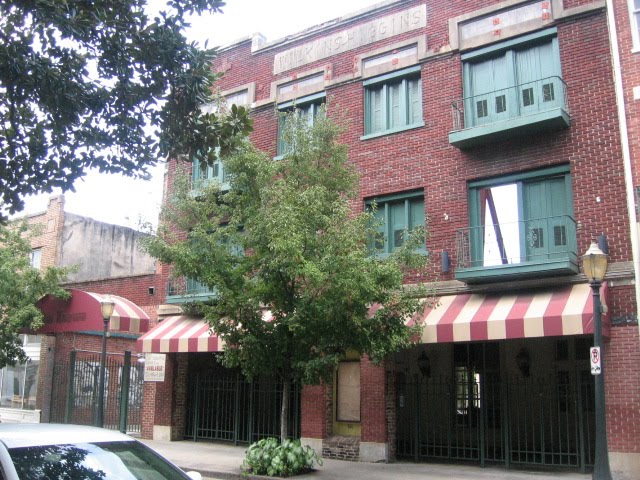 The surgery is much more obvious. 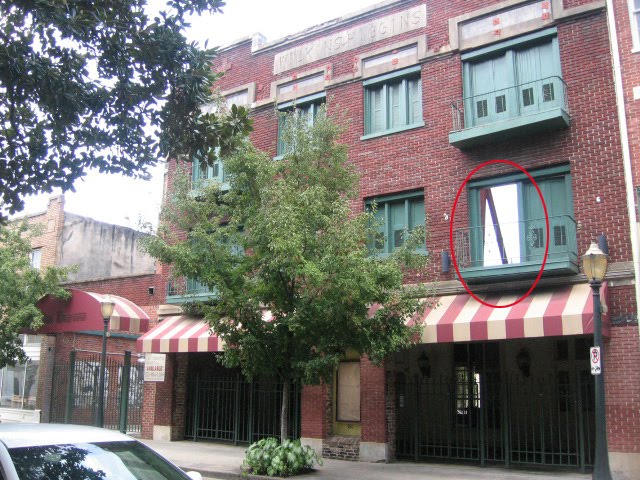 Like the building in Memphis’ Beale Street, it’s an old façade with girders holding it up. But it does show some critical differences. On Beale Street, the girders stood front and center, occupying part of the sidewalk. Here on Dauphin Street in Mobile, the supports are a bit more subtle because they sit in the back. But this façade also has something else supporting it; unlike Memphis, it’s more than a partition between the street and an open-air courtyard. 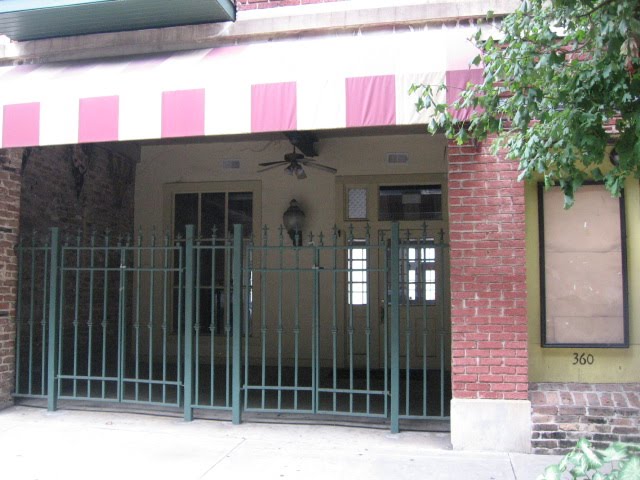 The lower level hosts genuine retail space. Whatever the tenant used to be, it was protected from the elements. The alleyway opening to the left of the facade shows how far back the structure extends, seen in the photo angling to the right of the alley: 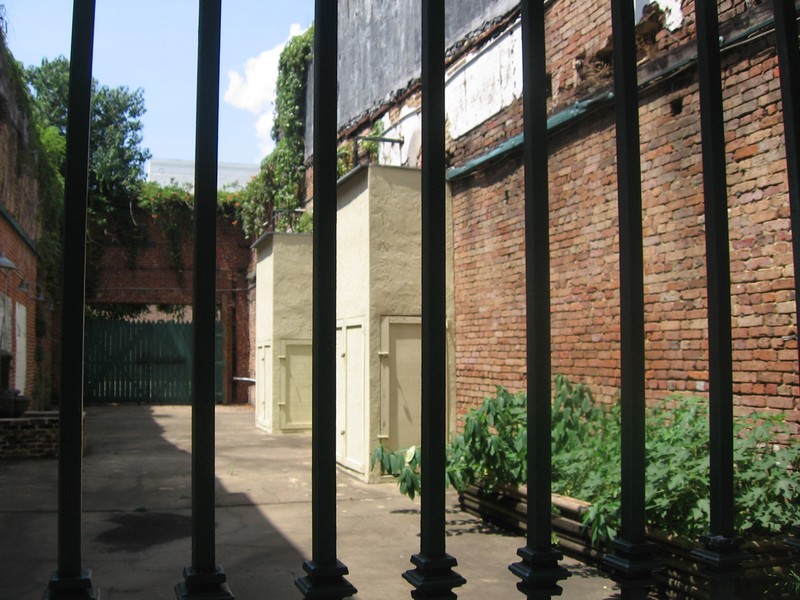 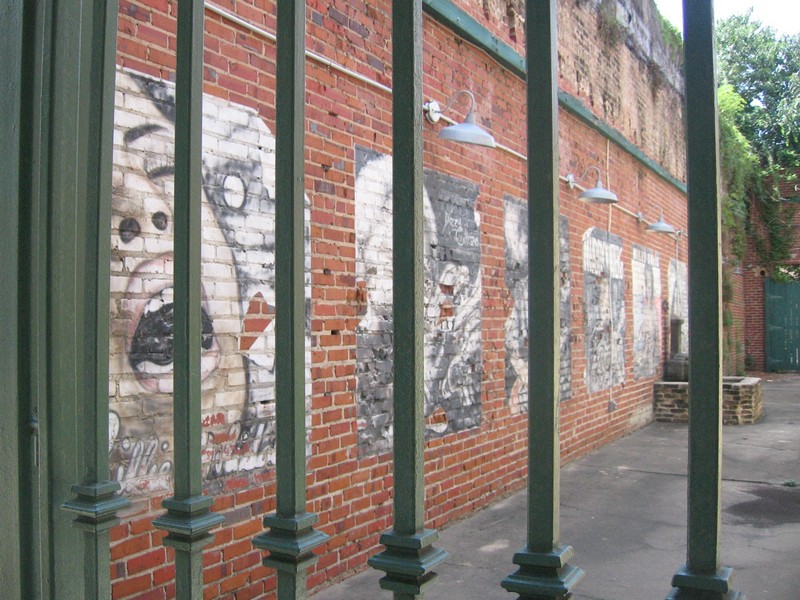 The scarring of the masonry in both photos suggests that this alleyway underwent some heavy surgery as well in order to achieve its current condition. No doubt at some point in the distant past, this area had a roof. Another significant alteration is right there at the entrance. 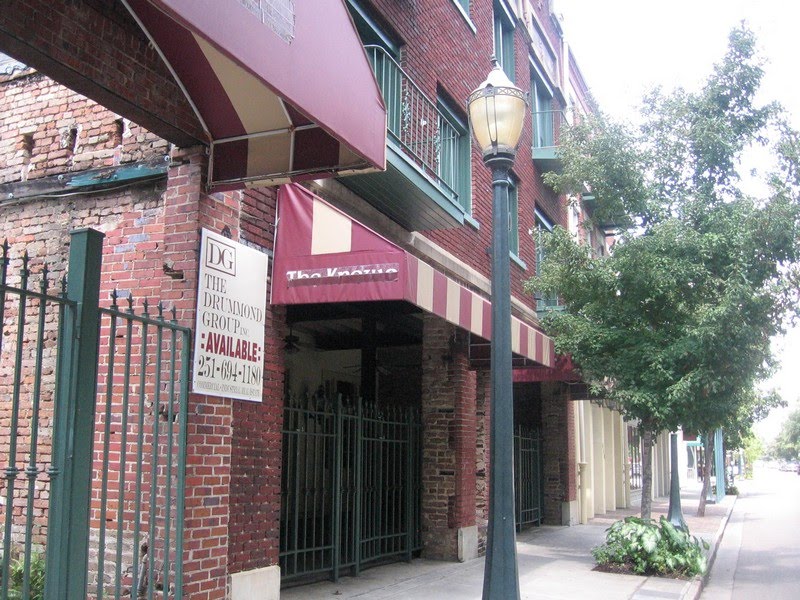 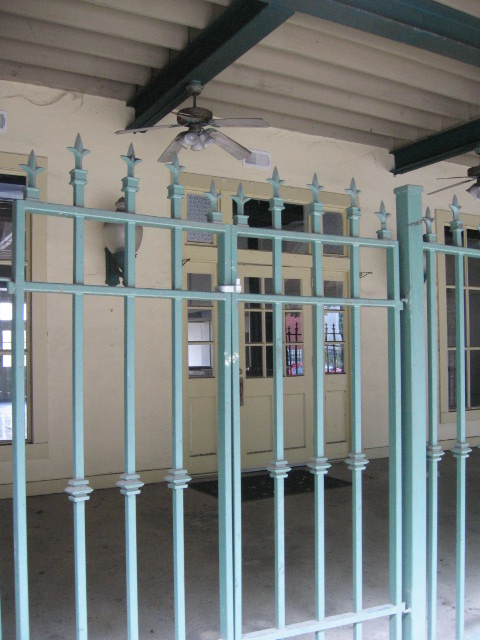 Most likely the first floor hosted some large storefront windows flush with the façade, but now they are gated, and the physical entrance to the shelter is offset, allowing a sort of loggia for potential open-air seating—one more reason I think it was intended as a restaurant.

But the most invasive aspect of this Dauphin Street façadectomy manifests itself when you crane your neck. 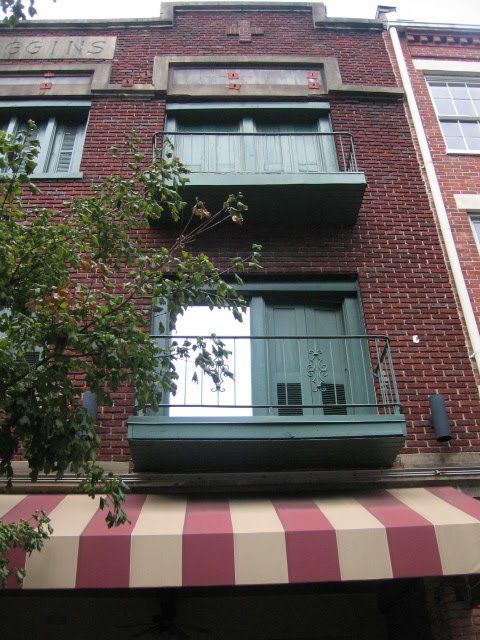 If it weren’t for the installation of a new first floor, this building would look just as goofy as the one in Memphis: a decorative brick wall suspended high into the air. But thanks to the restaurant installation at the ground level and the concealment of the girders, it genuinely takes a keen eye to notice the illusion—quite a contrast from the far more obvious, contrived effort in Memphis. Preservationists may groan at the shallowness of either of these initiatives, but they still demonstrate a conscious attempt to retain at least part of the historic commercial character of their respective streets. In both cases, the owner of the property may be waiting until the market is right for a higher and better use. At that point, he or she could fill in the remaining void with a structure that matches the façade.

Filling in the void and completing the façadectomy would be much easier with Memphis. The Mobile Dauphin Street example hints at something a bit more problematic and pervasive: many once-struggling commercial corridors are enjoying a revival through renewed populist appreciation in older architecture. But does this revival penetrate the entirety of the building? All to often, the first floor is the only thing capable of landing a tenant: the upper levels remain empty and sometimes quite decrepit. New Orleans’ Royal Street in the French Quarter offers a great example, where the first floor is replete with active storefronts hosting often high-end art, antiques, and collectables. Yet even there, where retail space rents at high prices (for New Orleans’ standards), the upper levels are frequently shuttered—a problem throughout much of the Quarter. The quaint ideal of retail on bottom and housing above is a concept we idealize but rarely embrace in actuality. Mixed-use seems great when someone else is creating the mixture. But the market demand for it—the best way to find an occupant for those other levels—is often miniscule.

This storefront on Mobile’s Dauphin Street looked good enough for a restaurant, and in a better economic climate, it will probably find a new tenant. But the likelihood of demand escalating enough to justify building a structure for those other two floors is slim. In fact, a restaurant on the first floor may actually be a deterrent to transforming those upper levels into residential or office. Food handling is an extremely tough use to mix. Not too many people want the same smells wafting into their home or workspace every day from the restaurant below, no matter how good it may be. And even the best maintained of restaurants have a greater propensity for attracting vermin such as mice or roaches. Ask anyone who’s lived next to a grocery store. Ask me.

In light of these undertakings in Memphis and now Mobile, it’s hard to take a firm stand on façadectomies. Like it or not, they’re part of a sub-practice within historic preservation, and they speak volumes about when the effort to salvage a structure aligns with demand—and when they clearly only generate dischord. We’ve already lost hundreds of buildings that intended to mix retail and residential throughout this country, and we’ll lose many more in the future. Even if Beale and Dauphin Street become trendy entertainment destinations (the latter one already is), nothing suggests that main street architecture has more than a niche appeal—a antique collector’s nostalgia. If anything else were the case, the majority of intact American main streets would be flourishing by now, but clearly they aren’t. I still hold hope that we will witness the restoration of numerous other aging, pedestrian-scaled buildings in the decades to come, but not all will enjoy preservation from top to bottom, back to front. A flimsy brick wall surviving by braces may look ridiculous, but the care involved in trying to save it earns a distinctiveness all its own. And maybe these shells will find a new hermit crab to re-inhabit them, filling out the remaining three walls, then finding a tenant on those upper-level apartments who never grows tired of the southern barbecue smells simmering below.

3 thoughts on “When Disney’s main street is the last man standing (without support).”