It’s been quite some time since I’ve featured a photo montage—a blog entry in which the presence of photos essentially dominates instead of text. But a recent occurrence in my home city of Indianapolis prompted me to recall some pictures I took well over a year ago that have suddenly become relevant again. Back then, I had hoped to create a montage of vacant, often blighted structures across the central part of the city that most likely would have undergone renovation by an ambitious developer riding the urban residential wave…except for the fact that both the zoning stipulations and the prevailing culture in the city overwhelmingly demand far more space for parking than these older urban structures are able to provide. And thus, buildings sit and rot.

Maybe someday I will still be able to create that photo montage, but it will have one less structure in my palette, due to a recent fire at the Chadwick building, just north of downtown on Pennsylvania and 10th Street. This structure, built during a pre-Depression rental boom in 1926, gradually devolved into budget studios as downtown Indianapolis began to decline in the 1950s. The Chadwick entered the National Register of Historic Places in 1983, and it sits in the historic St. Joseph neighborhood, just north of the official limits of the downtown Mile Square. Despite a downtown renewal that began in the mid-1990s, the Chadwick remained a housing choice of last resort, thanks in part to a negligent landlord who allowed the place to fall further into disrepair. It closed completely around the turn of this century and quickly became an eyesore in an otherwise steadily revitalizing area.

Most of my personal pictures of the Chadwick are fairly close-in, and are relatively few in number, so this will be a montage-lite. The best photo to demonstrate the massing of the Chadwick again comes directly from the Indianapolis Business Journal site, and is seen below, where the building to the left is a fully operational engineering firm. 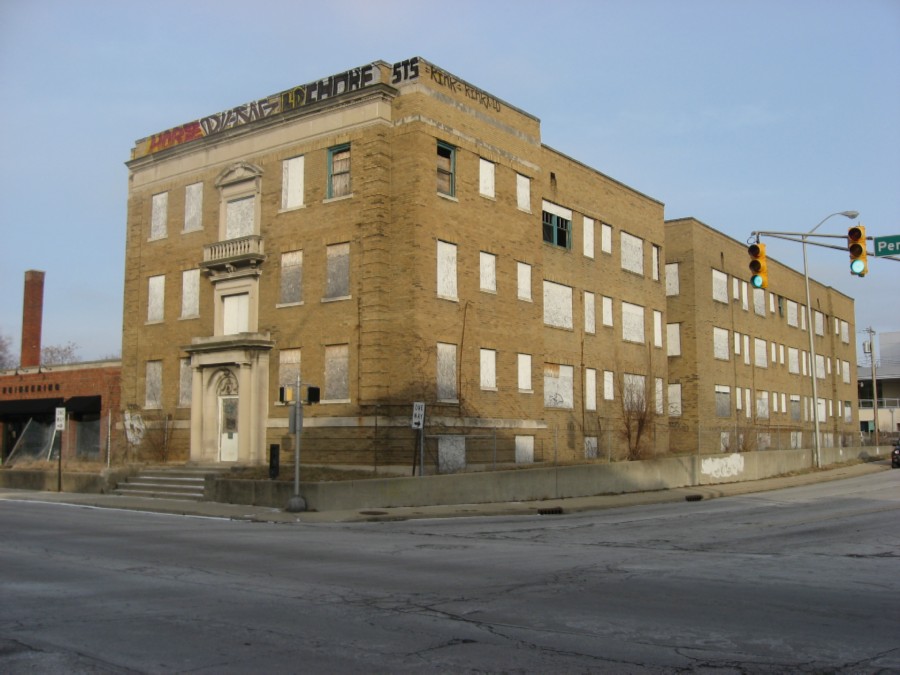 As this picture demonstrates, the Chadwick sat tightly in its portion of the block, with no real setbacks or room for off-street parking. By today’s standards, this might seems a bit like architectural irony, since the structure was meeting housing demand for the city’s steadily growing automobile industry, but apparently automotive workers were not guaranteed to be car owners in 1926. (Or, at any rate, car owners were not plentiful enough to warrant dedicated off-street parking.) After all, at that point in time, they could have used the city’s excellent transportation system to get to automotive jobs that most likely hugged the west side of the city—Indianapolis of the 1920s was “the Interurban Capital of the World”.

Those conditions don’t prevail in today’s environment, and this city, with one of the lowest funded public transportation systems in the country, depends overwhelmingly on the automobile. The results? Buildings like the Chadwick cannot find a buyer to redevelop them due to the unavailability of parking, and they quickly decay. Here before you are the pics I snapped back in the fall of 2009: 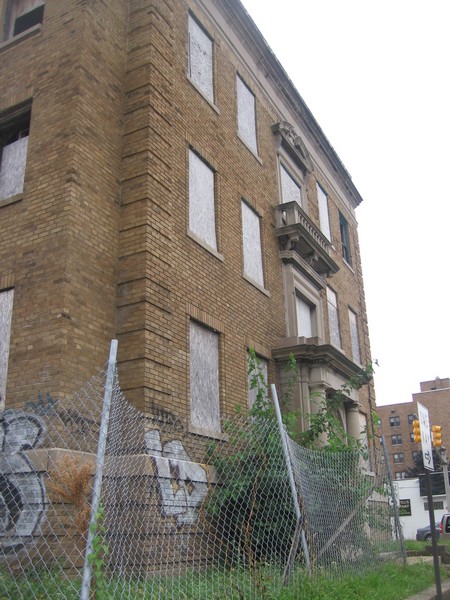 The façade wasn’t particularly distinctive by most measurements, but it reminds me of hundreds of similarly scaled buildings in Detroit, no doubt built in response to that city’s significantly larger 1920s automotive boom.

The building stretched all the way to its back alley, with a visibly contemporary structure immediately behind it. 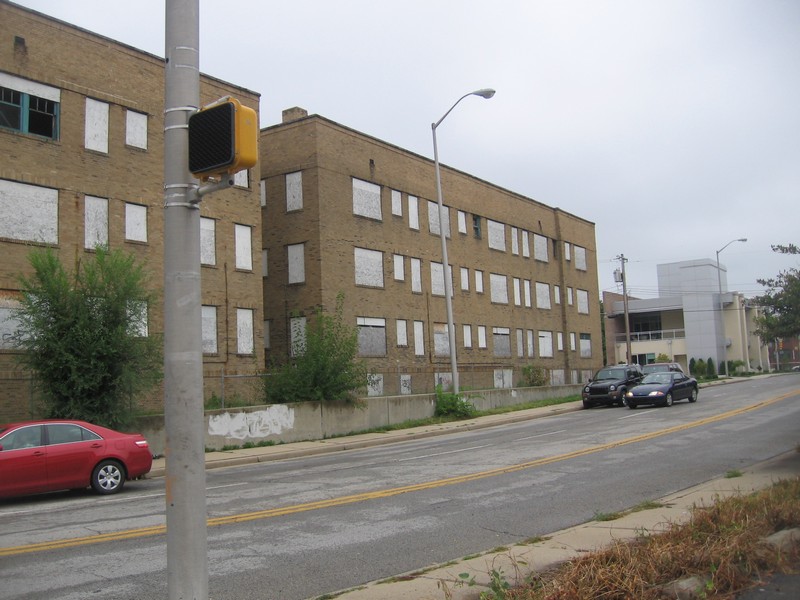 In the back there was really no room for parking, which no doubt further deterred developers from having a go at it in what otherwise is an economically healthy area. 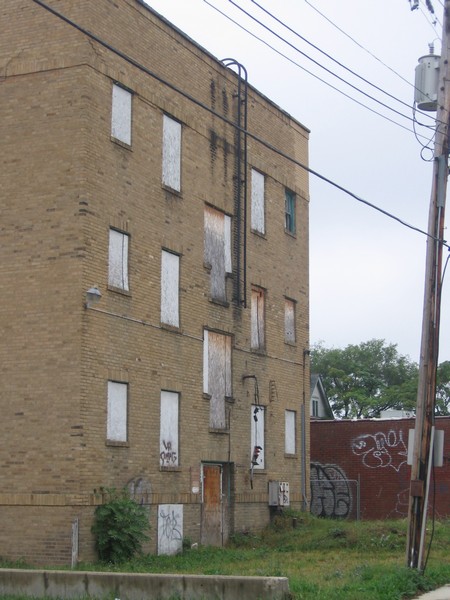 Buildings left vacant for a decade will inevitably host squatters and graffiti artists. Clearly some vandals left their mark on the adjacent Jarrett Engineering building as well—one of many reasons the latter building apparently posted a sign thanking the Indianapolis Fire Department for containing a blaze which could have spread far more unpredictably than the calculated wielding of a spray paint can.

One feature that has puzzled me has been why the north side of the building (away from the street and adjacent to the engineering firm’s building) used a different material for the third floor than the conventional brick seen everywhere else. 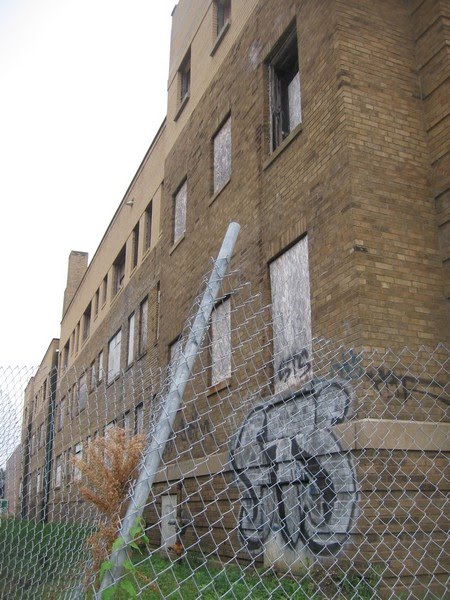 Could the Chadwick have been altered later in life in relation to some other, taller structure that used to abut it but has since been demolished? 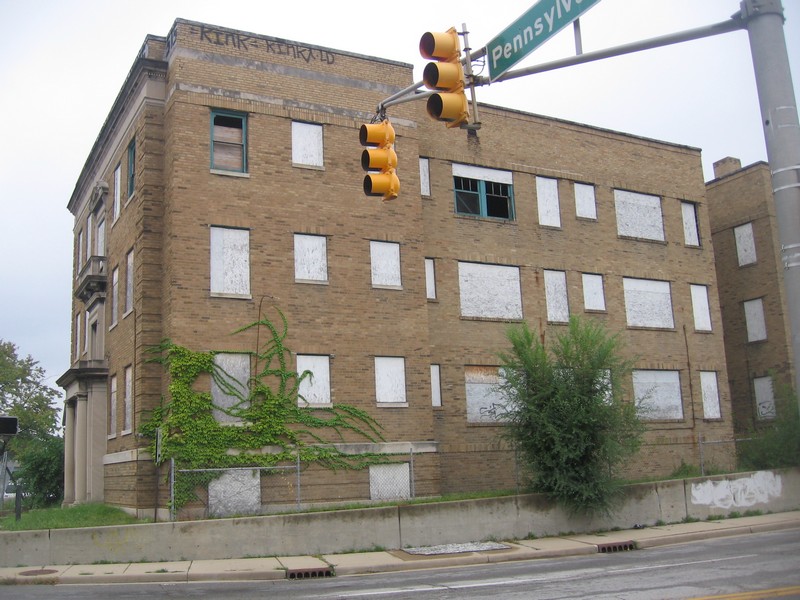 Also notable is how much higher the basement of the structure was over the street level.

Most likely the building hosted garden apartments, but this elevation might have facilitated a slightly lower-cost introduction of enclosed basement parking in a potential redevelopment.

However, the structure would have required significant restorative work. Notice the visible cracks in the masonry at the southeast and southwest corners. 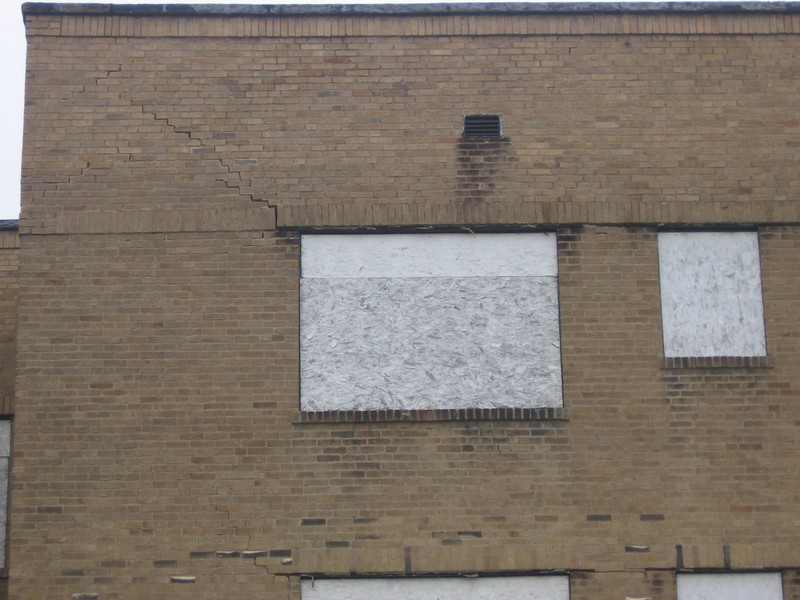 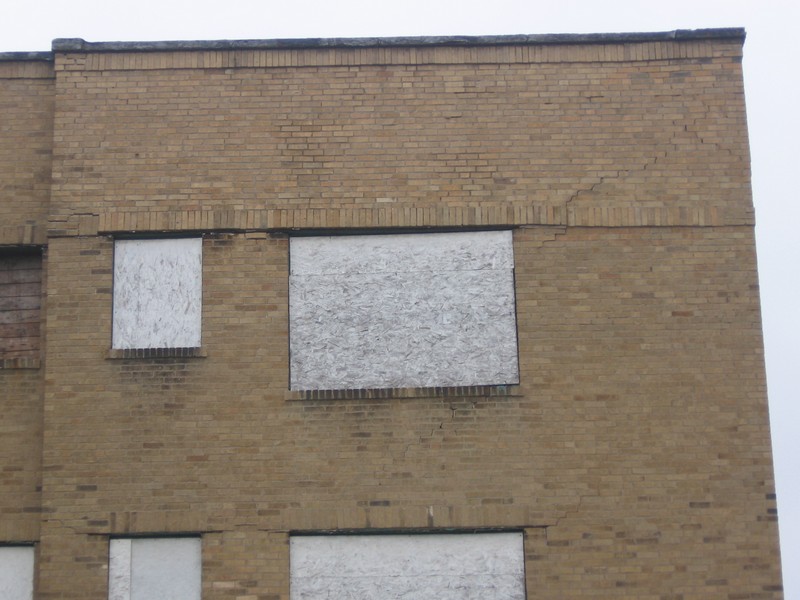 Maybe an architect could have assessed whether those cracks were the product of the missing supportive window frames (if they genuinely are missing due to the conflagrations of previous years), or whether more serious subsidence and foundational problems were the culprit.

But it doesn’t matter because the Chadwick Apartment building does not exist anymore. The urbanist blog Skyscraper City offers a heated discussion about the origins of the fire that felled the Chadwick. (Start with comment 3949 and scroll downward then read the next page; it gets feisty and fun.) The structure’s National Register status prevented the City from demolishing it, and despite the pesky issue of parking, hopes remained high that an enterprising developer would eventually see the potential for condos or yuppie apartments. But then the housing markets fizzled. A representative from the Indianapolis Department of Metropolitan Development assured me in a brief phone conversation that it wouldn’t be that hard for a developer to seek a variance. So how did the Chadwick meet its end—an out-of-control interior fire from homeless squatters, or an absentee property owner seeking a quick demolition?

The property will host a new development, most likely sooner rather than later. Many people on the aforementioned blogs prematurely bemoan the fact that it will lack the great urban massing that the Chadwick claimed, since virtually every multifamily unit in downtown Indianapolis needs off-street parking. I reserve judgment. The structure could just as easily have remained vacant for another decade, and it obviously would get only increasingly unattractive—and more costly to renovate. Despite its relative absence of a cited architectural heritage, Indianapolis—even just the St. Joseph Neighborhood alone—has other treasures far more worthy of a preservationist crusade. A hundred structures like the Chadwick have already faced the wrecking ball in Detroit; a structure like this coming down there might not even make news. A new montage awaits this parcel’s eventual redevelopment, and I will eventually complete the montage of salvageable Indianapolis urban beauties when I return the States.

PrevDUST: The shoe may fit, but does the foot fit the stair?
DUST: Romancing the (war)zone.Next

2 thoughts on “MONTAGE: Fanning the flames of long-term neglect.”