In search for an innovative blog topic, I’ve been sifting through my photo albums, new and old, in order to put my growing understanding of life in a conflict region’s military base within the context of other atypical American settlements. It’s going to take some time to ponder over all this—not something I have much of these days. Until then, I have to offer a footnote blog entry as I work out something a bit more extensive.

Obviously these bases are, with occasional exceptions, austere, serious locations without a great deal of time or attention devoted to whimsy. So when one comes across something lighthearted, it offers a welcomed contrast, no matter how slight. I was waiting in line at for lunch at the DFAC (Dining Facility) at a place named after the Afghan community of Deh Dadi, pronounced exactly how it looks. 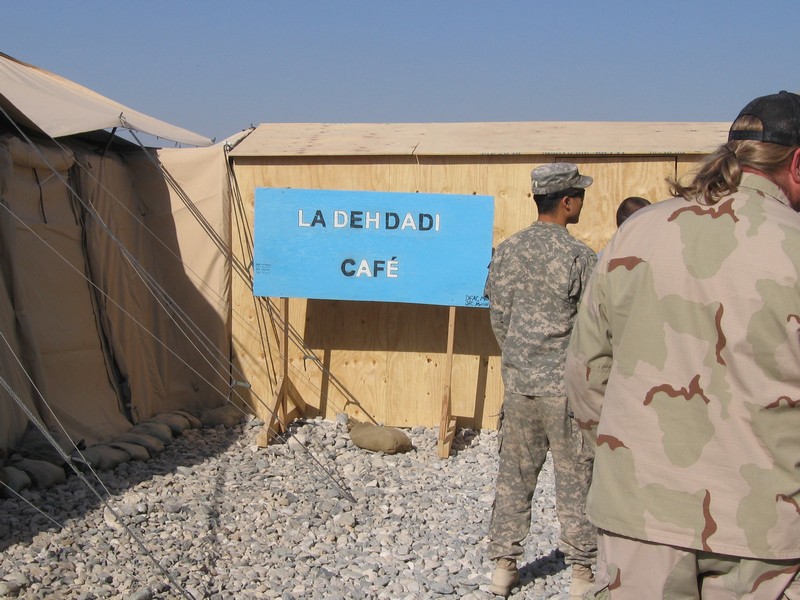 The lowest form of humor manages to transcend its origins, when the café itself consists of a series of windowless, conjoined tempera tents. The Merriam Webster’s online definition for the original word is “affectedly refined in manners or tastes”, with an unknown origin—perhaps the archaic term lardy-dardy used to describe fops, but those terse, successive, mellifluous vowel-consonant combinations also suggest a Romance language origin. Regardless, the creators of this otherwise drab sign at Deh Dadi betrayed their own la-de-da intentions.

But the unintentional laughs are the ones that linger. And this other image definitely ranks among my favorite here on the base for its novelty. I was the first American that I know of to discover some of these curiosities, no doubt while trolling around for blog photos. According to some of the troops who have gone on more than one tour, this is the first time they’ve seen such a thing as well. Camp Nidaros, a Norwegian-run compound within the larger Camp Marmal, (just a few miles from Deh Dadi) billets the Norwegian, Swedish, Finnish, and Latvian contingents. And next to the residential tents—the bedrooms—sits the inevitable counterpart, the bathroom. 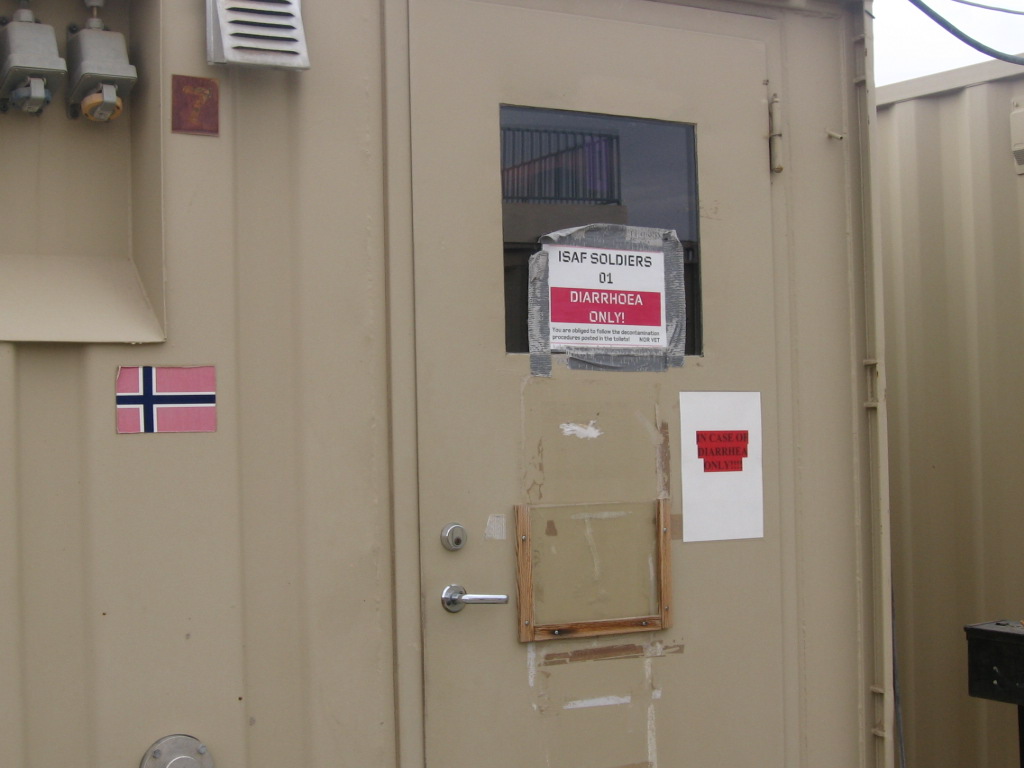 It’s a latrine, and latrines by definition host sinks, toilets, showers, or a combination of the three, all fit snugly within an 8′ by 20′ modular metal container. But never before have I seen one specifically devoted to diarrhea, as the red and white lettering warns in its British English spelling: “DIARRHOEA ONLY”. I’ve always thought “latrine” to be a deceptive word, with a far prettier, lilting sound (French of course) that contrasts sharply with anything that goes on inside it. And how telling: already my second thumbnail blog entry focusing on gastrointestinal—how would you say?–irregularities. For the record, here’s the first.

It puts a whole new angle on the idea of latrine duty as a punishment.

PrevMONTAGE: Fanning the flames of long-term neglect.
When Disney’s main street is the last man standing (without support).Next

8 thoughts on “DUST: Romancing the (war)zone.”