Readers and friends have been nagging me for another, more detailed article on Afghanistan. I wanted to get a blog post out before the end of the month, and tomorrow I leave for an indefinite amount of time to explore yet two more bases (my fourth and fifth since I’ve been here in the Afghan theater). Internet access for my personal computer—where I store all my photos—is still limited but improving, little by little. The biggest hindrance now, though, is that I have not been able to vet my observations for national security concerns. I have learned that photography of some things on base is strictly verboten, but I haven’t learned exactly what may compromise Department of Defense internal information—and it’s possible that something seemingly innocuous all of a sudden becomes classifiable when subject to further analytical scrutiny.  My first few articles have been very sparse in their photography.

Which is why I’ve chosen something for my first real essay which is so mundane that you can find it anywhere in the US. And I’ve clearly always had a penchant for the mundane. The subject is bollards, and my most recent home base, Camp Marmal outside the city of Mazar-e-Sharif in northern Afghanistan, has them everywhere: 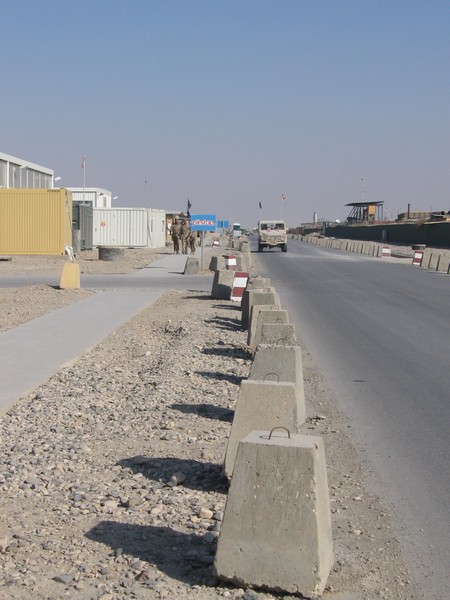 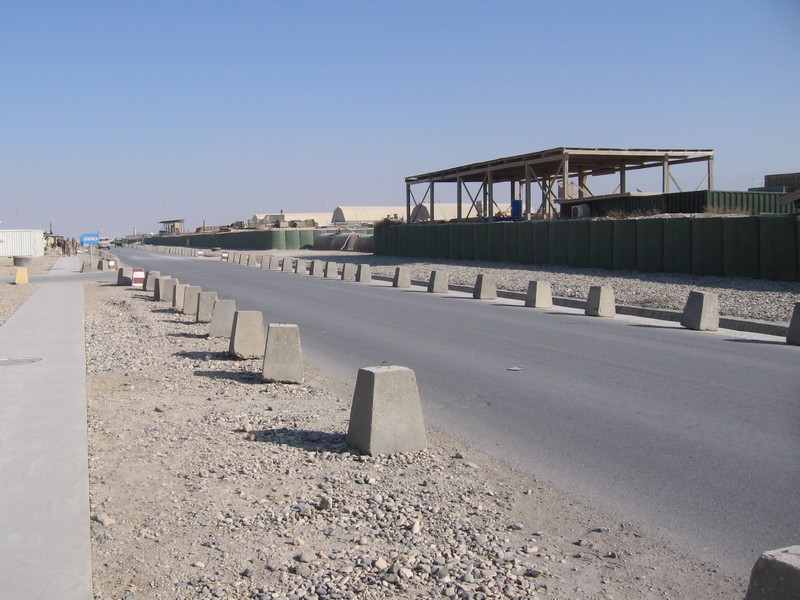 I realize that “bollard” isn’t exactly part of common parlance, so if the photo above didn’t make it clear, a bollard is any short post or impediment, usually of concrete, that restricts vehicular movement. Apparently it’s more of a British term; “bollard” in the American sense is mostly nautical, referring to the post at a wharf to which mooring lines from vessels are tied. Typically bollards shield pedestrians from cars, and that was most likely the intent of the German engineers who built the original infrastructure at this base six or seven years ago. Unlike some of the other bases I’ve visited, Camp Marmal has made a conspicuous effort to accommodate pedestrians. It would seem foolish not to do so: nearly everyone on a base gets around by foot, and only the largest ones can justify a shuttle that would comprise the equivalent of mass transit. In addition, most bases are almost completely unlit at night, so it is incredibly dangerous to walk alongside a road without sidewalks. Yet the much larger, NATO-managed Kandahar Air Field in the south of the country has virtually no sidewalks. Everyone is forced to walk in a bed of rocks—they’re too big to be considered gravel—similar to the groundscape visible in the photos above. (Nearly everyone at Kandahar also wears reflector belts at night; you could receive a fine if you don’t.) The bollards at Camp Marmal also severely restrict parking, since a vehicle cannot park on the side of the roads, all of which are only two lanes wide. Kandahar, conversely, lacks bollards for the most part, and drivers park willy-nilly with little consequence. The pyramid bollards here aren’t aesthetic, like one might see in a public square; they are as coldly utilitarian as virtually everything else in the austere landscape of an Afghanistan military installation.

They get the job done, but are they fully necessary? I regret now that my photos don’t capture it as well, but a closer look reveals that the pedestrian environment on the opposite side of the street is not quite the same. 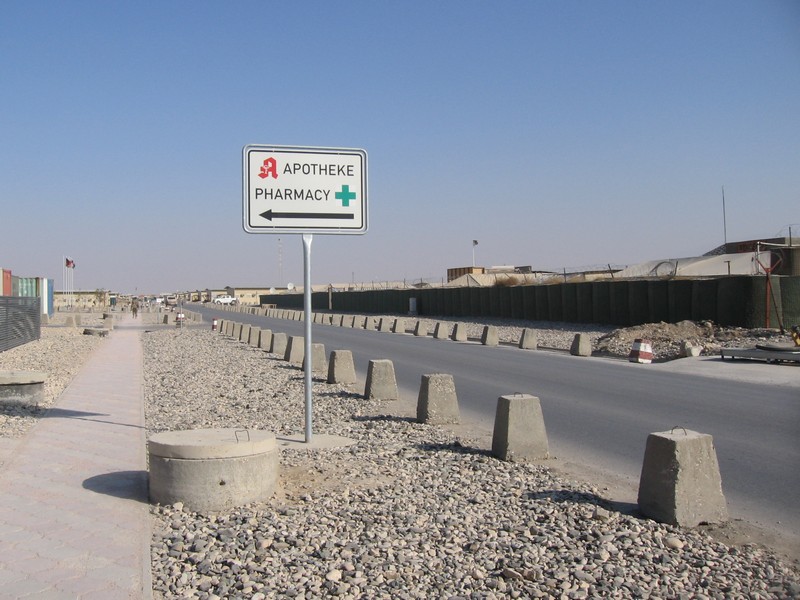 No sidewalk there. For the most part, Camp Marmal has only invested in sidewalks on one side of the road, which is better than nothing, but much of the space at the verge on the other side is devoted to an open drainage ditch, to accommodate the water during the rare but violent Afghan thunderstorms.

But wouldn’t these drainage ditches serve as an impediment to vehicles in themselves, and are the bollards really necessary on that side of the street? The truth is, I don’t entirely know the answer. My guess is that these ditches would restrict virtually all cars in a non-military setting, but nearly a third of the locomotives on an Afghan base are the gargantuan MRAPs, whose tires could easily negotiate a mere drainage ditch. Then again, MRAPs are among the most top-heavy vehicles in existence, so even if they can handle the groove, it could disrupt their center of gravity enough to cause a rollover. Ideally, a careful consideration of the necessity of bollards at each location—rather than just installing them en masse as a precaution, could have saved a great deal of money, if it turns out that stormwater management infrastructure genuinely serves much the same purpose.

Elsewhere in the base, some construction managers with a more artistic bent have tried to improve a different type of bollard, this time at a bridge crossing. 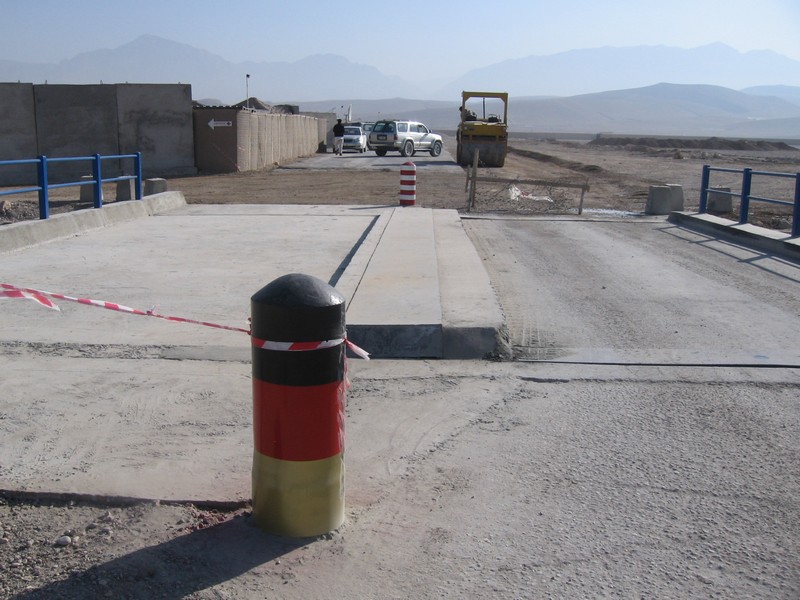 The colors of the German flag clearly evoke a patriotic gesture imparted upon the bollard in the foreground. But what about that striped object in the distance? Could Dr. Seuss’s Cat in the Hat have met its demise in a bed of wet cement? 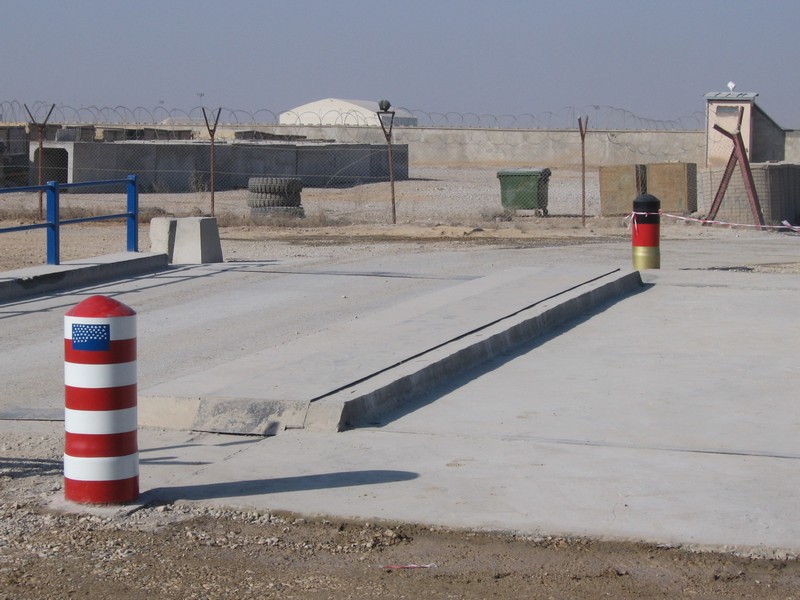 No, it’s another painted bollard, this time apparently referencing the American flag, with clearly less successful results. I suspect that the artist chose these two flags because the countries represent the overwhelming majority of the troops bedded at Camp Marmal (the remaining 20% consist largely of Scandinavians and Balkans), but the aesthetic gesture clearly wasn’t as well thought out. I had to pass by this multiple times before I determined it was a flag, even though I should have known, since it leads to the entrance of the American compound. But the artist clearly didn’t refine his or her space management skills. 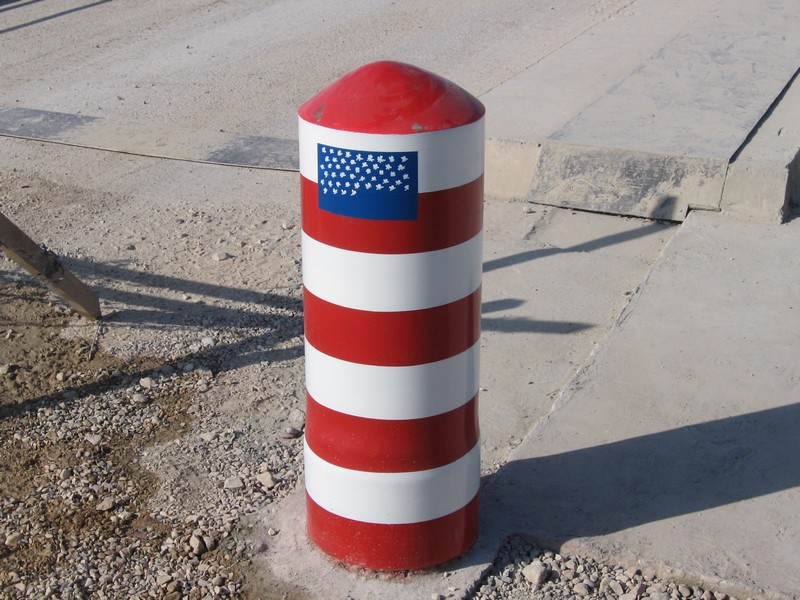 At least all 47 states are accounted for.

PrevIn limbo a bit longer.
The hood is well-paved with good intentions.Next