Dividing the loyalties at the bumper.

While I continue to sift through articles and scholarship on neighborhood associations in my free time, I’ve come to realize I’ve let the posts lag a bit too much. So I offer a quick rumination on a topic I love but haven’t featured much: license plates. Some states doggedly adhere to a certain design over the years; Minnesota and Delaware come to mind for offering the same appearance for the standard plate for as long as I can remember. Other states refresh their plate design routinely: Ohio, Indiana, and Mississippi generally feature a new look every two to three years. In addition, some states only offer a few specialty plates; again, Minnesota and Delaware seem particularly consistent in this regard. They may offer plates for veterans and environmentalists, but the variety is relatively limited. Indiana and Mississippi, again, offer so many designs that it’s hard even to identify the standard.

But now I must provide a quick snapshot from a license plate I have only seen twice—once in New Orleans and once (here below) in Gulfport. Chances are slim that it’s from the same car, but it’s hard to imagine there are too many other examples of these out there: 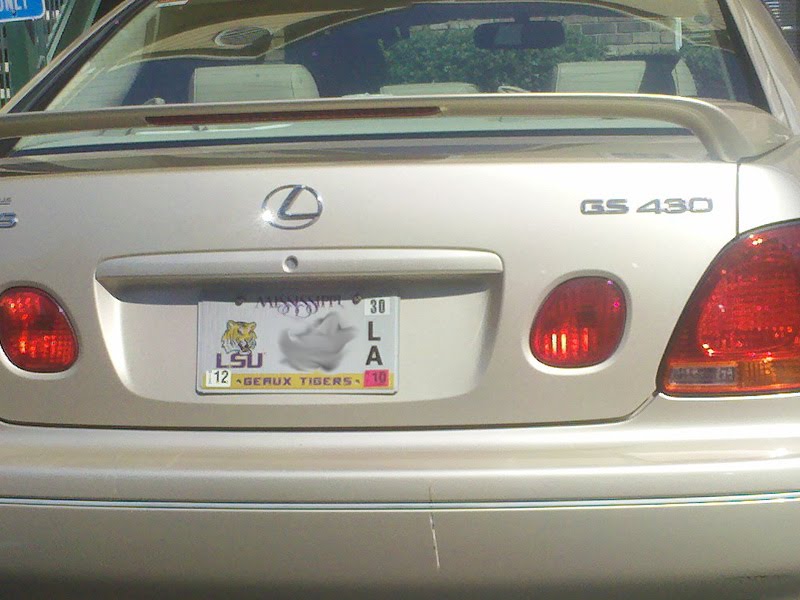 This strikes me as among the strangest specialty plates that a state can offer: one featuring a university (Louisiana State) that differs from the parent state featured on the plate (Mississippi)! I can certainly understand states offering plates for alums from the key university in state, but why would a state offer plates with the logo and motto of one of the most prominent rivals? While I’m sure this isn’t the only example—the Plateshack website above features a Delaware specialty with the West Virginia University logo—this is the only example I have seen in person. Louisiana and Mississippi share a border of more than two hundred miles, much of it focused upon the nation’s most prominent river. Their shared cultural ties to the Deep South are unquestioned. And it probably is more common for a Louisiana State University alum to live in Mississippi than, say, Vermont. But the Academic Common Market from the Southern Regional Education Board reveals a significant number of reciprocal agreements for academic programs between the two states: thus, a resident of Mississippi can enroll in certain departments at LSU and still only pay in-state tuition.

It may be bold to say that this spirit of cooperation extends to Departments of Motor Vehicles, but Mississippi most likely does not owe Louisiana enough to feature the Pelican State’s pre-eminent state university on the back of cars licensed and registered in the Magnolia State. But clearly it happens, and I’m sure a keen eye would find a car that features the opposite—a Mississippi university on a Louisiana plate. The culture of license plates’ design and content seems to be shifting away from centralized, authoritarian control across the country, as increasingly more flexible, diverse plate designs add to the aesthetic palette, even in comparatively staid plate states like Minnesota. A simple search for Department of Motor Vehicles yields privately owned sites like these, suggesting that the private sector passively allows some mild outsourcing of this branch of government. We may eventually get to the point where the combined culture of (increasingly popular) vanity plates and specialized designs work to eliminate the significance of a state’s original or flagship plate. If states continue to feature content from their neighbors just as Mississippi has, it could over time erode the significance of identifying cars by their parent state. I know this is a complete stretch, but it may even become meaningless altogether to list the state name on a car—the plate number and the design could be enough. As long as the plates retain a high degree of individuality it would hardly seem to disrupt the cultural order: after all, what better place for Americans to announce to the world their emotions, vocations, and ideals than on their bumpers?

2 thoughts on “Dividing the loyalties at the bumper.”