Butts in the loo.

In many ways, this study serves as a companion piece to the previous blog entry. Both articles explore a social phenomenon that has swept the nation, largely manifested through increasingly palpable policy justified by the goal of providing for the common defense or promoting the general welfare. The previous post, scrutinizing passenger screening at airports to prevent terrorist attacks (the common defense), examined how the laborious and increasingly invasive security procedures not only inconvenience passengers but the airports themselves, depriving the Roanoke Municipal Airport of an entire gate. And this article looks at a potential “pushback”—perhaps the funniest I can find—against the increasingly mainstream indoor smoking bans (the general welfare).

Though it may seem trite to assert that anti-smoking ordinances have taken the nation by storm, the fact remains that the laws in place today in virtually every state would have been unthinkable even thirty years ago. The Atlantic magazine recently chronicled some of the earliest bans, from the global Papal fiat of 1624 that banned tobacco because it prompted sneezing—which in turn resembled an orgasm—to the American temperance movement of the turn of the 20th century, in which crusades to abolish smoking (some successful) accompanied that of the more high-profile pursuit of alcohol prohibition. Adolf Hitler ostensibly labeled tobacco “the wrath of the Red Man against the White Man”, recalling how early settlers of the Americas foisted intoxicating liquors upon a genetically unprepared indigenous population. Anti-tobacco sentiment was embraced by the Nazi party. Few, if any, of these initiatives flourished to achieve widespread, long-term enforcement; successive governments repealed all of them.

Even though the US was long the cradle of the global tobacco market, it has also largely set the standards for the contemporary wave of anti-smoking legislation. Though several jurisdictions passed laws in the 1970s restricting smoking in restaurants to separate sections, the City of San Luis Obispo, California, first implemented a ban in all public places, including restaurants and bars—the first in the nation, and, purportedly, the world. What began as sundry municipal ordinances in the early 1990s expanded to a statewide anti-smoking campaign in 1995, which saw the first workplace smoking ban. Opposition from the tobacco industry pushed the ban’s effect on bars and nightclubs until January 1, 1998. Other states followed with their own bans (at varying levels of severity), to the point that, as of 2010, only 11 states have not enacted a ban—and the majority of these states still allow municipalities to create their own laws prohibiting smoking. Other countries have followed suit, and some—with a less decentralized system of governance than the US—have enacted California-style indoor smoking bans for restaurants, bars, and pubs across the entire national boundaries in a single fiat. Meanwhile, San Louis Obispo recently escalated its own smoking ban to include restrictions on city parking garages and lots, streets, sidewalks, stadia, playgrounds, and parks. The City isn’t quite the pioneer this time around; over twenty other cities in California preceded it in banning smoking in these new locations.

However, one institution has proven doggedly immune to this sweeping attack on the culture of cigarettes: casinos. Several states’ laws have stalled in the legislature because of appeals from the gaming lobby. Nine states that passed widespread smoking bans years ago have exempted casinos. Other states have exempted the hospitality industry altogether, while regulating most other workplaces. Even states with otherwise generally uncontested bans, such as New Jersey, have allowed smoking to continue in the robust gaming parlors of Atlantic City: after the Council passed a ban in 2008, it quickly rescinded it due to the casinos’ pressure, allowing smoking to remain on 25% of the floors. Other states that have not exempted casinos from the smoking bans have witnessed an impact: the Illinois Casino Gaming Association has experienced an over 30% drop in revenues from February 2007 to the same point in 2009, while comparable casinos in Northwest Indiana have only experienced single-digit declines amidst a punishing economy. Although hardly the only factor influencing Illinois casinos (the regulatory climate for gaming in the state is much stricter overall), casino operators easily predicted that plunge in revenues; many of them estimate that 70% of casino patrons smoke.

Regardless of the viability of those estimates, a quick trip to a casino not affected by anti-smoking legislation suggests that they milk what survives of the smoking culture for all it’s worth. Mississippi, for example, has no statewide ban (though over 20 municipalities in the state ban smoking in all workplaces). Casinos are not subject to any laws outside of municipal bans, and no city in the state with casinos would ever dare regulate them, for fear of driving them out of town. The smoke-friendliness of a Mississippi casino hotel is manifest within moments of walking through its doors: aside from the ashtrays at nearly every slot machine or poker table, smokers can criss-cross the parking garages, hallways and the main lobby without repercussions, cigarette in hand. Most casino hotels offer a bounty of smoker-friendly overnight accommodations, and even the elevators—where smoking is banned virtually everywhere else in the United States—apparently permit smoking.

But nothing shows smoker friendliness like a public restroom. 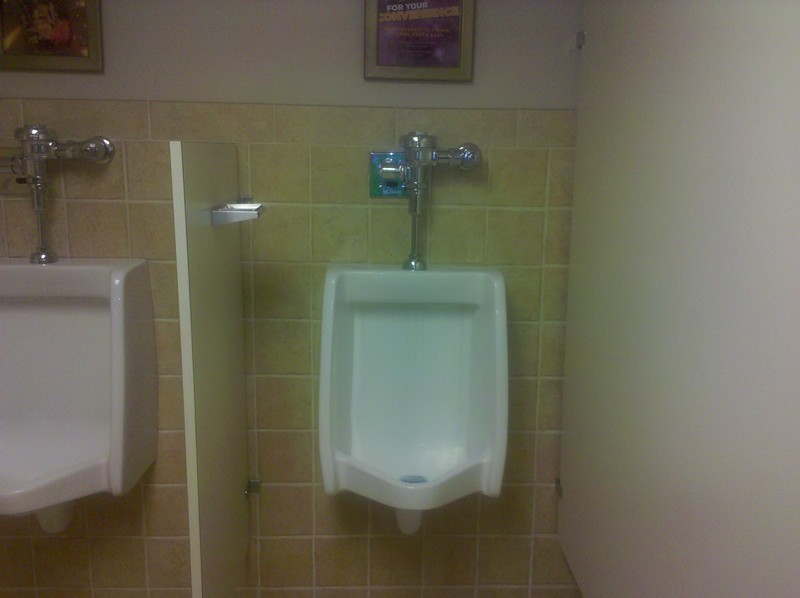 The men’s room at this Mississippi casino (to be left anonymous) even allows the more coordinated gentleman to have a smoke while taking a leak. Notice the ashtrays to the upper left of each urinal. 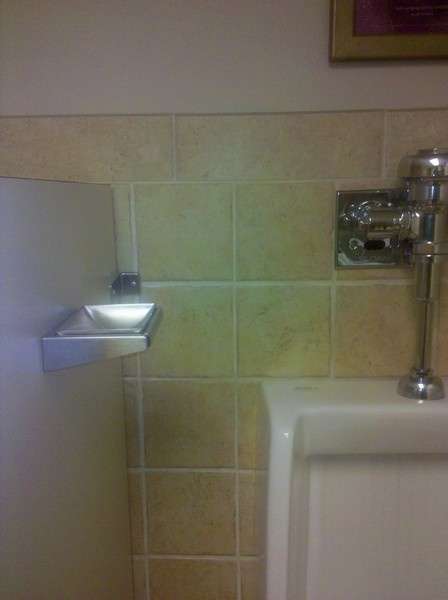 And just in case he isn’t so great puffing and pissing simultaneously, the ashtrays have a grooved spot to store the cigarettes. 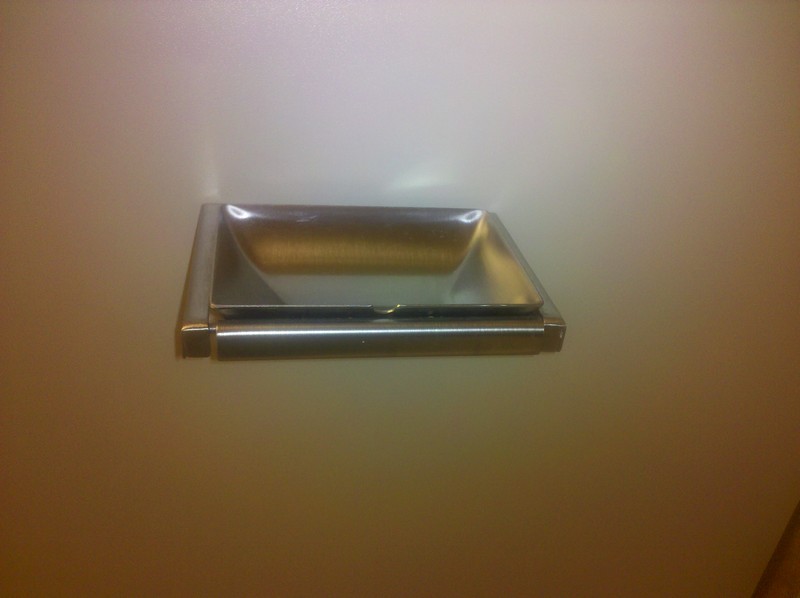 I particularly like the fact that the casino restroom accommodates the youthful or more vertically challenged smokers with ashtrays as well. 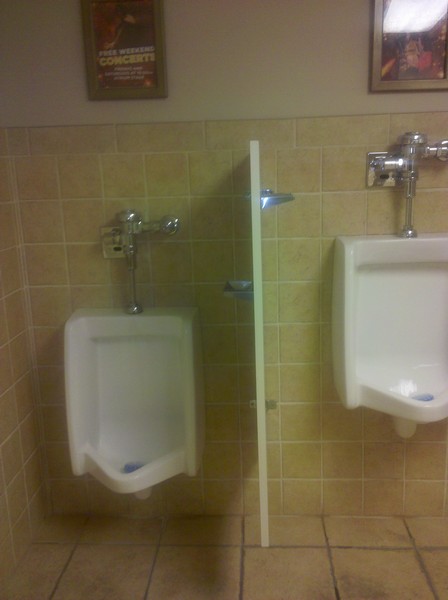 But my favorite element of all: the toilets let the men smoke during number two as well. 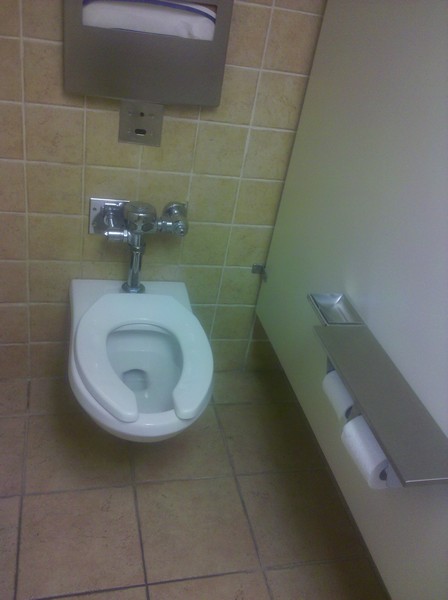 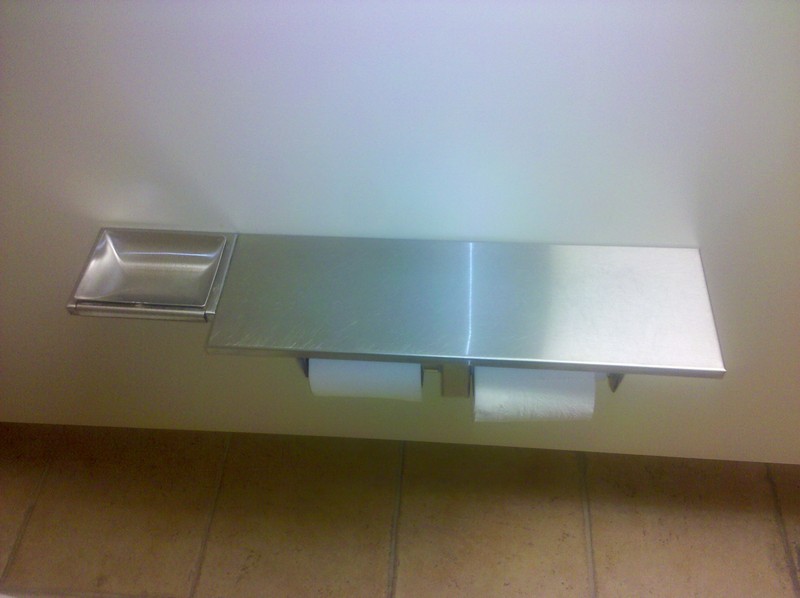 I’m not sure these ashtrays acknowledge multitasking talent or a remarkable defiance of basic hygiene. Although it has become increasingly common knowledge that men wash after restroom use far less than women, thus perhaps explaining why men may be less fazed by putting a cigarette to their lips while nature is calling than women would, something tells me that this casino accommodates female smokers with ashtrays in their respective restroom as well. At this casino, even an institution like Starbucks remains remarkably tolerant of smoking. 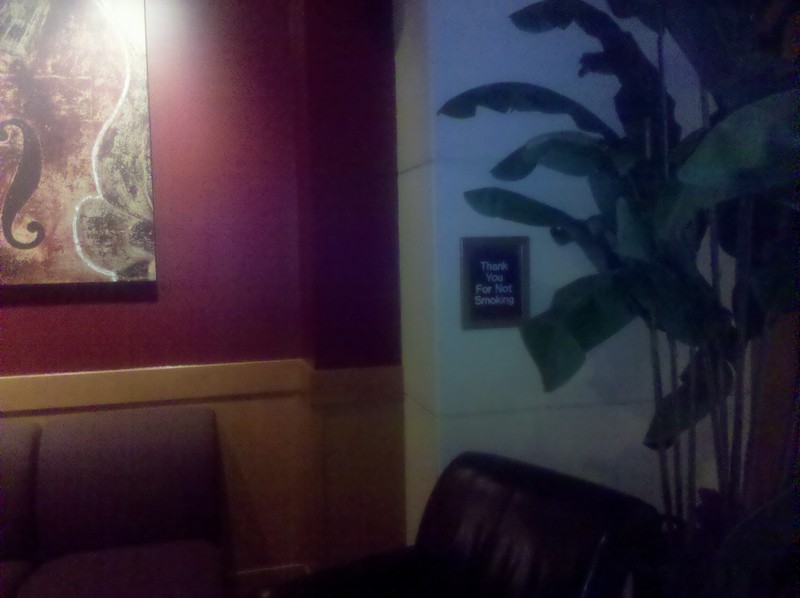 Though the sign still proves that they prohibit smoking in the store’s premises within this casino, the establishment is completely open to the adjoining lobby where people may smoke freely, with plenty of ashtrays to accommodate them.  In fact, I have witnessed in another casino that people can stand one inch outside the premises or scoot a café chair to the hallway, while letting the smoke waft into the Starbucks. Virtually everywhere else in America, Starbucks has long been vehemently anti-smoking; they have increasingly started to impose smoking bans on their outdoor patios. Starbucks’ regulatory rights do not extend into the hallways of a casino, but the java giant would hate to sacrifice its ability to supply caffeine to late-night denizens of the already notoriously windowless casinos. A huge number of Mississippi casinos have Starbucks in them.

Even as casinos are proving to be one of the biggest indoor environments that advocate for their right to accommodate smokers, more and more are falling prey to the bans. Iowa’s governor Chet Culver has recently considered expanding the state’s ban so that casinos are no longer exempt, and the Atlantic City moratorium on the casino smoking ban still falls under increased consideration. But if the gaming industry can continue to argue that its success depends on remaining a bastion for smokers, complete with ashtrays in restrooms, it is unlikely that too many more states will impose bans while the economy remains weak and casinos provide abundant jobs. Their infrastructure’s subtlest details support smoking.

At the beginning of this essay, I compared this casino initiative to an earlier blog post in which another sweeping policy—that of heightened national security in airports—manifests itself with increasingly restrictive results, just as is the case in the relation between smoking bans and gaming. The similarities stop there though. The Transportation Security Administration and all of its rigorous screening standards have arisen, almost cumulatively, as a direct response to the terrorist attacks on September 11. Airport security was relatively unobtrusive prior to this event, which provoked a spike in regulating how people could board airplanes. Though some could argue that the intensity of smoking bans has spiked as well within the past five years, no single discernible cataclysm spawned it. It has arisen gradually over decades and with widely varying results across jurisdictions, while the federal government has implemented airport security standards with great uniformity. These striking differences may explain why one of the two initiatives has elicited far more chatter of controversy. While privacy advocates have objected to the intrusiveness of screening technology and airlines have said that the hassle detracts patrons from flying, the implementation of airport security has hardly divided the nation enough to arouse “breakaway” airport authorities; that would be illegal. By and large the public has voluntarily ceded this responsibility to the federal government. Conversely, smoking bans remain profoundly fragmented spatially and have suffered rejections in a number of municipalities where leaders have attempted them; the likelihood of the United States seeing a national ban akin to Ireland seems faint. In fact, by some metrics, it’s too late—Ireland passed the ban in 2004 as a national policy. Despite one of the most aggressively anti-smoking cultures in the world, the American public would never tolerate such a top-down approach for smoking, even as top-down was largely accepted as the ideal solution for airport security.

No doubt I’m engaging in some pretty vicious rhetorical gymnastics to analogize these two phenomena, but perhaps the crucial way of viewing them through the same lens involves their relation to the mundane. Even for the most frequent of fliers, air travel deviates from normal rhythms far more than, say, using the restroom. It is generally easier to shift public opinion in non-routine matters than those experienced by everyone. Smoking may hardly be a universally shared experience, but to the habitual smoker, it is as much a part of the day as a trip to the toilet when you get out of bed. I’m not trying to be an apologist for smoking/gaming nor a critic, but removing ashtrays from casinos has clearly generated more flak than installing body scanners in airports. Now only these questions remain: how did the public react when smoking was banned from flights, or what would happen if airports introduced gaming, as is the case in smoker-friendly Schiphol Airport in Amsterdam?