When light poles and steeples compete with the high rises.

A few months ago, I posted one of my longest articles to this blog: a three-part series on exposed overhead electric wires, focusing on the remarkable prevalence of this manner of electrical conduit in New Orleans. The Crescent City served as a backdrop for an exploration on the pros and cons of retaining airborne circuitry. New Orleans has long seemed distinctive to me because of the sheer density of its overhead wires. While some cities such as Chicago deftly conceal them in back alleys–and in most downtowns, the city’s public works or utilities departments have buried them altogether–the majority of the New Orleans sky remains sliced across by charcoal cables. Why doesn’t the city invest more in burying those wires and hiding the unsightly poles that hoist them? Upon closer analysis, this dominance of overhead wires makes sense in this particular environment: while undergrounding cables makes them less susceptible to high winds (problematic in hurricane-prone regions), they prove far more vulnerable when it comes to floodwater saturation. Also, although buried wires are less likely to suffer interruptions in the transmission of electric current—after all, trees won’t fall on them—a power outage on an underground wire is more costly or time consuming to find and repair than an overhead wire. It’s a stalemate: the pros and cons for burying electric cables neutralize one another. Thus, the argument over where the infrastructure should run—either up high or below ground—depends very little on the operational superiority of one approach over another.

But now I’m going to retract one of the fundamentals to my earlier argument—specifically, that New Orleans offers a particularly extreme example of overhead cables. All American cities have at least some exposed overhead wires here and there; many of them have only buried wires in the downtown, while the newer subdivisions out in the suburbs require it by law (or employ it because it is the only way for new developments to remain marketable). And now I have recently discovered that many smaller cities have not even buried all the cables in the heart of their downtowns. Take Lafayette, Louisiana, for example: 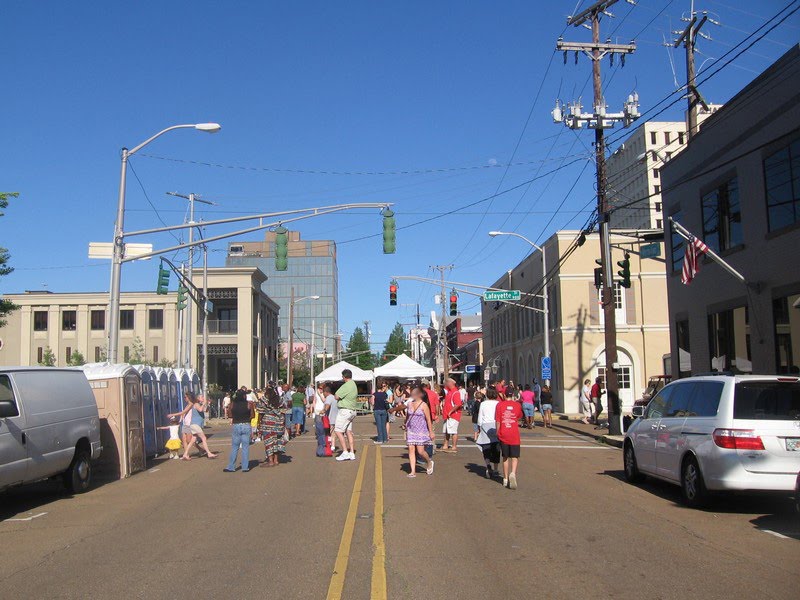 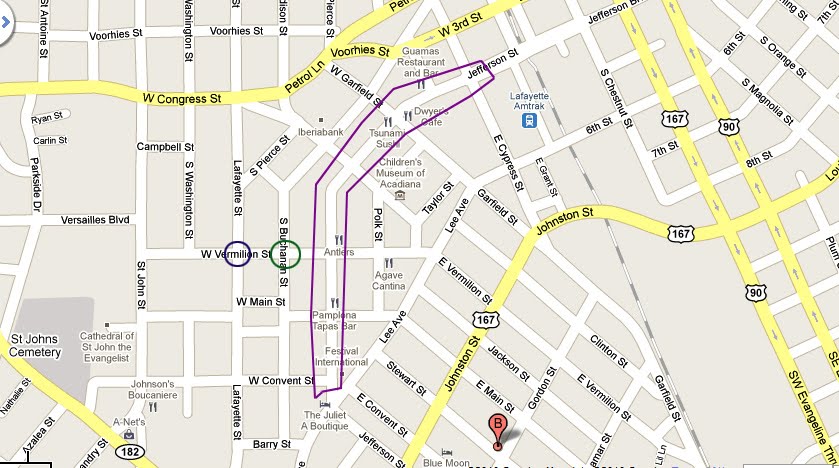 The map frames the central part of the city, while the photo captures the intersection contained within the blue circle. Here in the heart of downtown, the intersections are not only crisscrossed with wires, but the giant wooden poles that hoist them above the ground are clearly visible on every sidewalk. Another example just a block away, at the green circle on the map, is even more extreme: 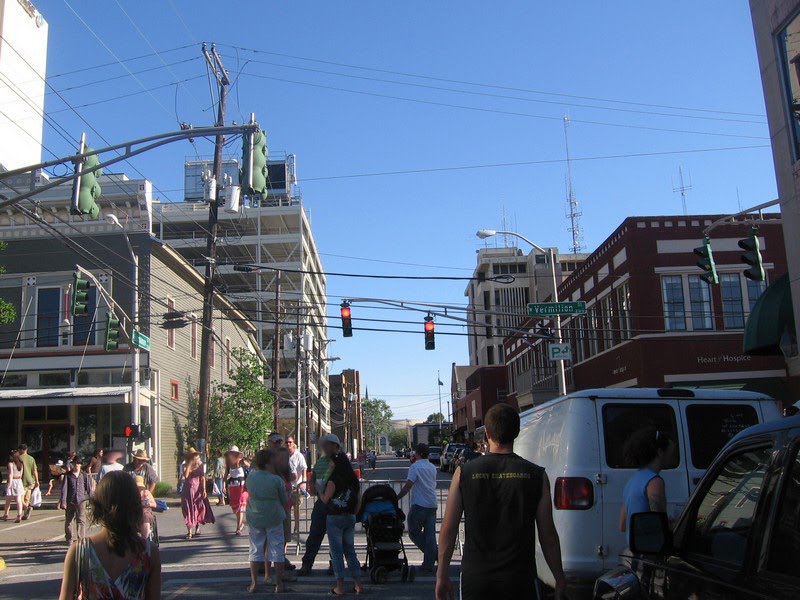 Yet one more block further, all the wires have been buried, and the stop light design employs a different type of pole and mast—more distinctive than the conventional metallic ones visible in the wiry photos from above. 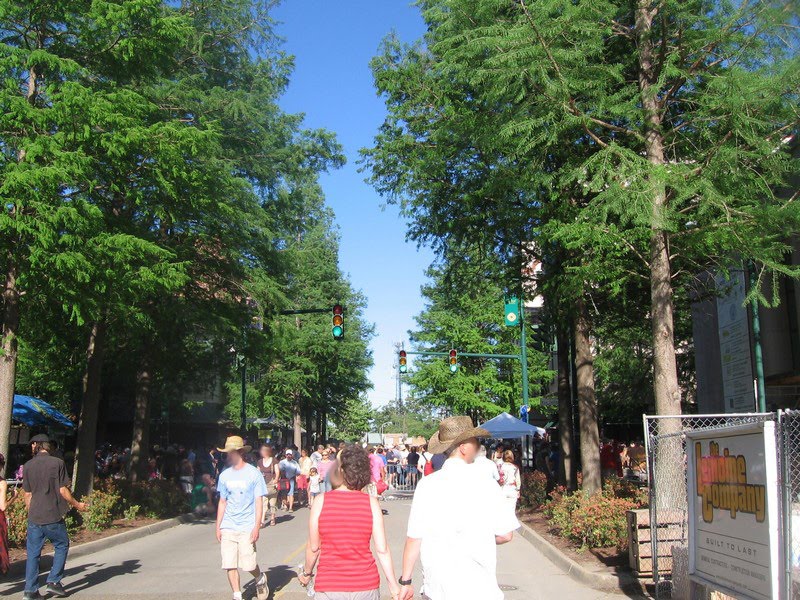 This street, outlined in purple in the map, comprises the clear original main street of Lafayette. It is also obviously the largest beneficiary of streetscape improvements. Jefferson Street in Lafayette boasts buried cables, signage in both English and French, and customized stop light masts. The city has spent more money on sprucing up this street than any other part of the downtown. Conversely, the infrastructure in much of the rest of the CBD looks a bit like the old chromolithographs from the early 20th century, when electricity was brand new: wires and light poles everywhere.

Is this a problem? The photos above, taken during the small city’s single biggest annual event, the Festival International de Louisiane, do not show any human engagement with the electric poles. Most of the people probably don’t even notice them. Advocates for buried electric wires often complain about the “clutter” of overhead utilities, but do visitors to a city appreciate buried cables? Does it even register in their consciousness? One could argue that buried cables make a streetscape look more modern, but does this practice enhance the attractiveness of a street to the point that businesses may consider relocating there? It’s hard to tell from my meager photos in Lafayette, but Jefferson Street with the buried cables has a vibrant retail presence. It has helped give this college town a visible identity, not just in terms of nightlife for students, but also for tourists attracted to this petrochemical boomtown for its centrality in Cajun culture. Did the streetscape improvements play any role in this corridor’s low commercial vacancies, or did it win out simply because it had the pre-existing main street architecture to support entrepreneurial retail? I’m skeptical that the buried cables had any impact. Aside from the fact that the City might have buried the cables long before Jefferson Street enjoyed its reawakening, many retail corridors thrive regardless of brick sidewalks, decorative signs, and buried electric wires. Conversely, scores of Main Street Associations have implemented those same streetscape improvements in small towns, to no avail.

I am increasingly of the belief that the arguments that favor undergrounding overhead wires are purely aesthetic. Since the burial of electric wire creates an environment where something is removed rather than added, the aesthetic merit of this potentially costly initiative seems increasingly doubtful. Why should a city shell out so much money when few people are going to care about the finished product, and it is nearly impossible to gauge fiscal impact? Lafayette does not sit in quite as serious of a floodplain as New Orleans, but it is just as vulnerable to hurricane force winds, so those two factors would at least push the argument in favor of undergrounding electric wires. But smaller southern cities the size of Lafayette often lack the tax base to implement these expensive improvements, and the result is that massive electric poles sprout up on downtown sidewalks in cities throughout the South. Therefore, I admit I was wrong in my earlier blog post: New Orleans is hardly the only city with lots of overhead wires. Look around and go to the downtown of southern cities smaller than the big, new ones like Atlanta. Overhead wires are everywhere. But my central claim from the previous blog post remains unchanged: I just have a wider array of evidence supporting the notion that arguments for burying wires depend more on aesthetics and individual taste than anything else. Judging from the busy wires that weave between the buildings on these downtown blocks, the leaders in both New Orleans and Lafayette wisely have bigger fish to fry than reducing overhead clutter. And in due time, I suspect the City of Lafayette plans to bury the wires visible in these first two featured photos. But virtually no one will notice when that happens either.

2 thoughts on “When light poles and steeples compete with the high rises.”