Meandering toward the Statehouse.

The meringue follows the meat. After so much time and attention devoted to Jewish settlements in the South, it’s time to move to a simpler, less weighty topic—more of an anecdote. Several weeks ago, I took the High Street exit ramp to enter downtown Jackson, Mississippi from Interstate 55. My first time in the area after several years, I noticed that this arterial leading into downtown had been expanded and upgraded considerably: widened, repaved, new streetlights, cables buried, new sidewalks. As a city with consistent rolling hills, Jackson offers many vistas like this one, leading directly to the State Capitol just beyond the horizon. But the streetscape from this vantage point is strangely asymmetrical: 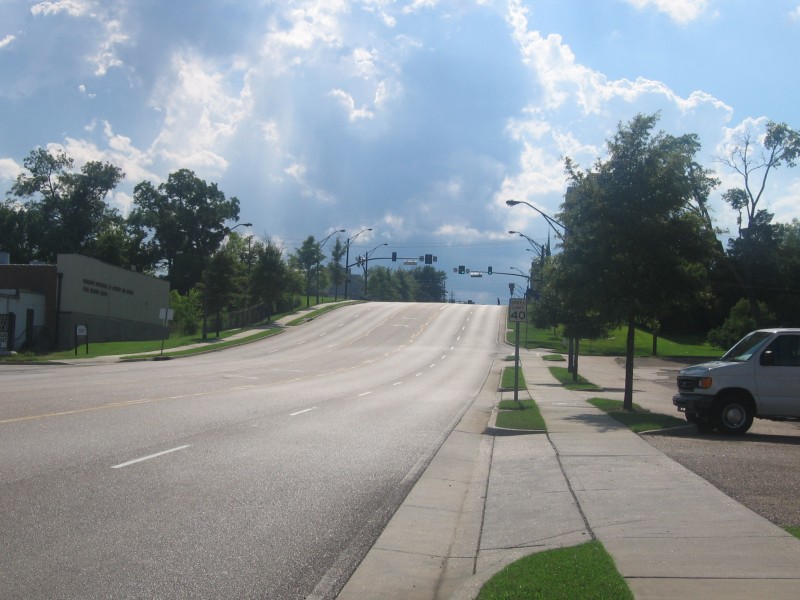 The sidewalk on the left side of the road continues over the hill, but on the right side, it seems to stop abruptly. However, a closer view reveals what’s really going on: 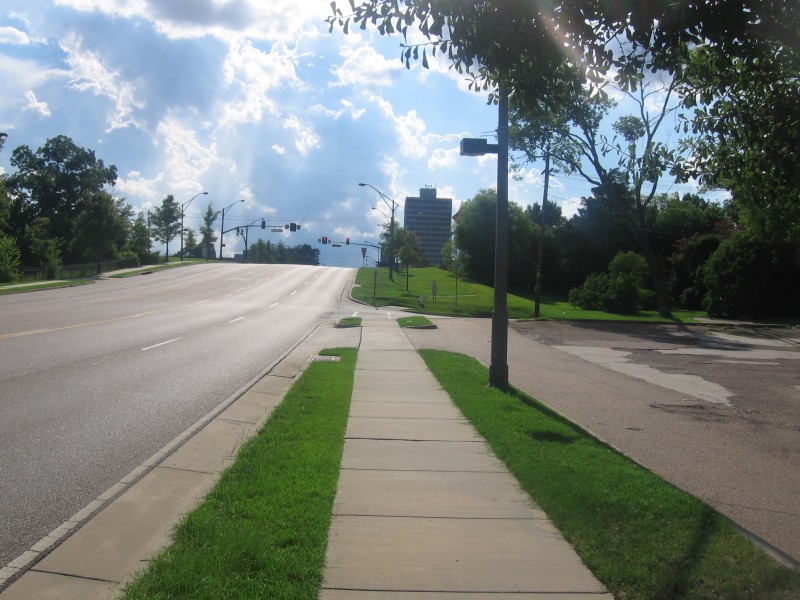 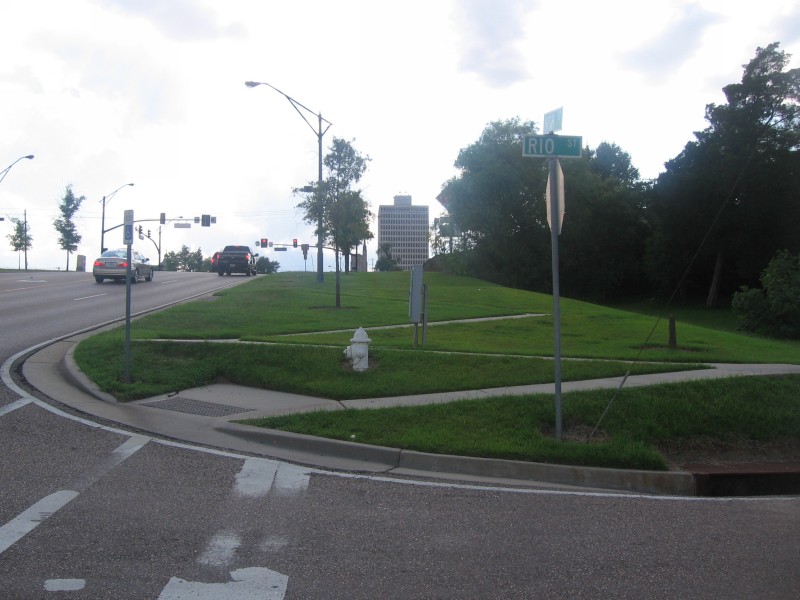 The sidewalk is there—it just zigs and zags to make it easier to negotiate the steepest part of the incline, presumably as an aid to individuals in wheelchairs. (The small handicapped sign immediately to the left of the curb cut, where sidewalk meets the street, supports this postulate.) Approaching the design closer at least partially captures the paving technique. 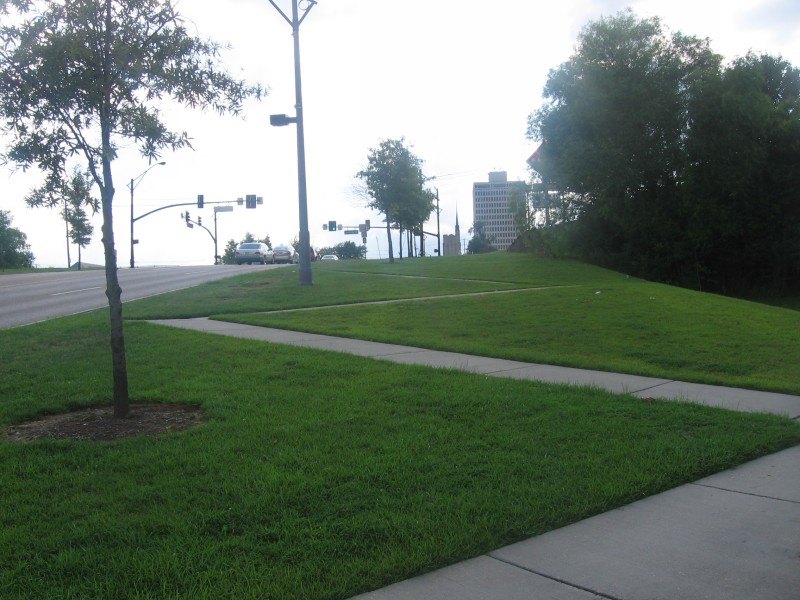 The sidewalk meanders mostly at what seems like a series of 90-degree angles, though the first of the angles is much more acute, in order for the path to maneuver around a fire hydrant and electric meter. 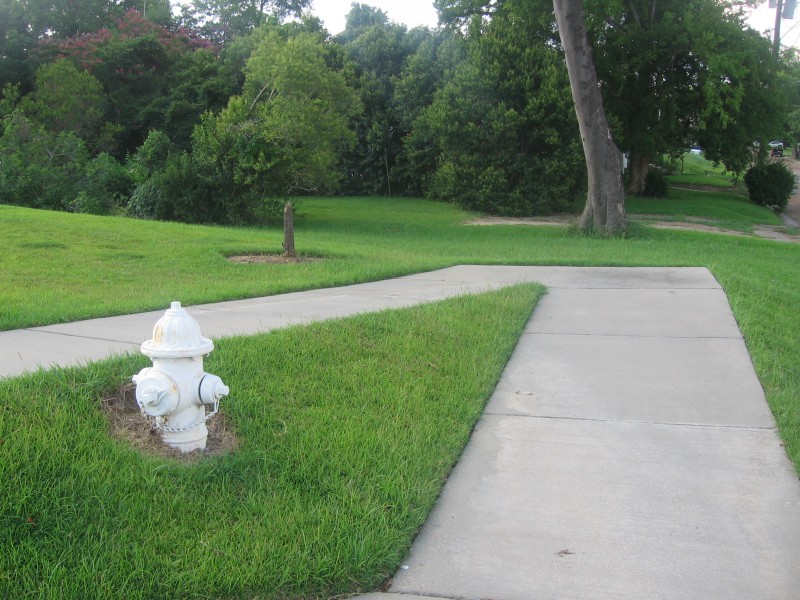 At the vertex of each kink in the sidewalk is a concrete bay, just large enough to allow the wheelchair to shift directions.

Anyone with even a passing familiarity with San Francisco should recognize how this loosely recalls the famous block of Lombard Street, otherwise known as the Crookedest Street for the series of hairpin curves compressed into a single block—the only way automobiles could safely manage the 27-degree incline over this portion of the street. Crookedest Street remains strictly one-way downhill for automobiles, as do the nearby Vermont Street (actually steeper than Lombard and greater sinuosity, but less picturesque and thus more difficult to find an online photo) or the sinuous Snake Alley in Burlington, Iowa. Jackson’s topography does not exactly rival that of San Francisco (nor does it rival that of Vicksburg, just 40 miles to the west), but one can hardly question the difficulties that wheeled vehicles have negotiating any steep hills: it requires considerable stamina or horsepower to climb them, while the inertia going downhill increases the dangerous likelihood of losing control of the machine.

Like an interior ramp at a school in West Virginia that I blogged about earlier, this portion of High Street in Jackson is attempting to comply with the Americans with Disabilities Act’s Standards for Accessible Design. The manual states in Section A4.8 on “Ramps” that slopes of 1:16 to 1:20 are preferable, since anything as low as 1:12 (a rise of 1 foot across a run of 12 feet) would require considerable upper body strength and stamina for the wheelchair user, and would also pose difficulties for many ambulatory ramp users. I don’t have the tools to measure whether this sidewalk complies with ADA ramp codes (and even if I did have the tools, I wouldn’t know how to use them), but clearly the Public Works Department has taken advantage of a particularly generous easement—if this is not purely public space already—to accommodate wheelchairs along this stretch of the road. The sidewalk on this side of High Street would thus offer a level of safety and comfort to the wheelchair user, whereas the other side of the street would not: 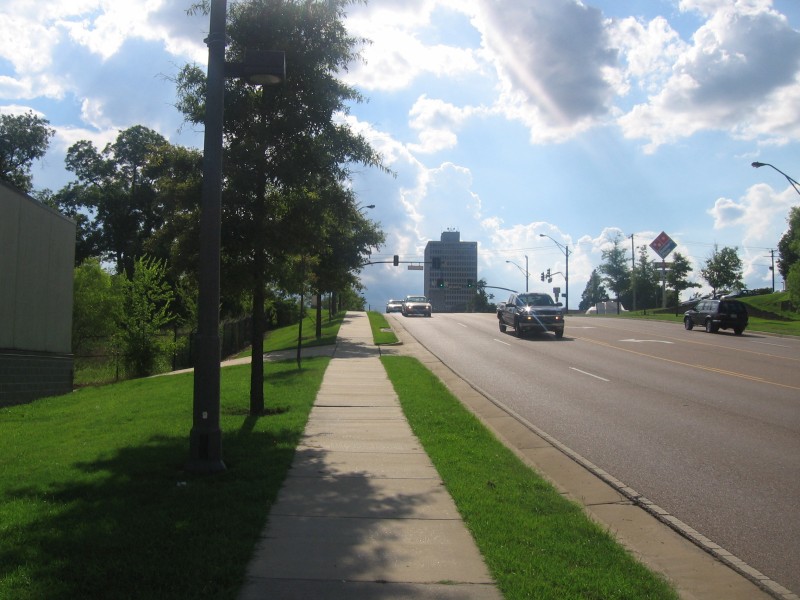 At a basic utilitarian level, this is an admirable effort, but would it hold up to a cost-benefit analysis? Obviously many ambulatory pedestrians will save themselves the time of meandering by taking the other, more direct sidewalk, or they will bypass all of the hairpins imposed through ramp codes by simply walking in the grass. But it doesn’t appear as though too many people have done this: 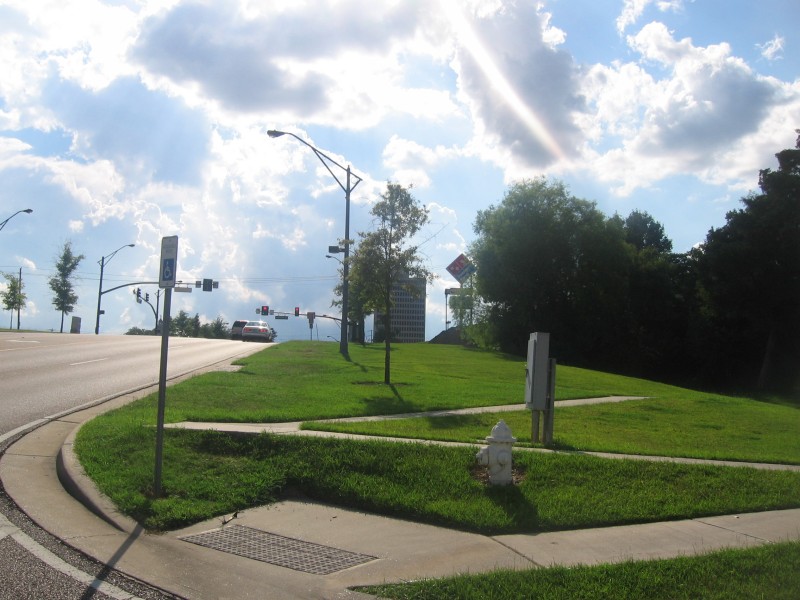 Notice the grass appears completely unworn, so ambulatory pedestrians have not been carving out a desire path to give themselves a shortcut. In all likelihood, this sidewalk is rarely used. One could attribute this to the fact that, like most cities of the New South, Jackson is overwhelmingly automobile-oriented. This is true, and much of Jackson is lacking in sidewalks, so any pedestrian improvement is commendable. But the fact remains that this block sits on the edge of downtown, loosely connecting a residential neighborhood to the north, while providing a critical link to I-55 just a few blocks away, along with all the expected car-based restaurants, hotels, and services. The map below—with the “crookedest sidewalk” block circled in purple—proves this point:

Much of the downtown environment directly to the west of this block is appropriately scaled to pedestrians and is comparably hilly. But of course, the sidewalk width along city streets would never permit the level of hairpins necessary to meet ADA Ramp Codes, and more than it would in San Francisco, where the steepest hills use decidedly non-wheelchair friendly stairways instead of sidewalks. The City of Jackson has installed a wheelchair and pedestrian amenity where it is unlikely to be used. The photo below, taken through a bug-splattered windshield right at the point where the interstate exit ramp meets High Street, reveals the typical land use pattern at this “Gateway” to downtown Jackson. 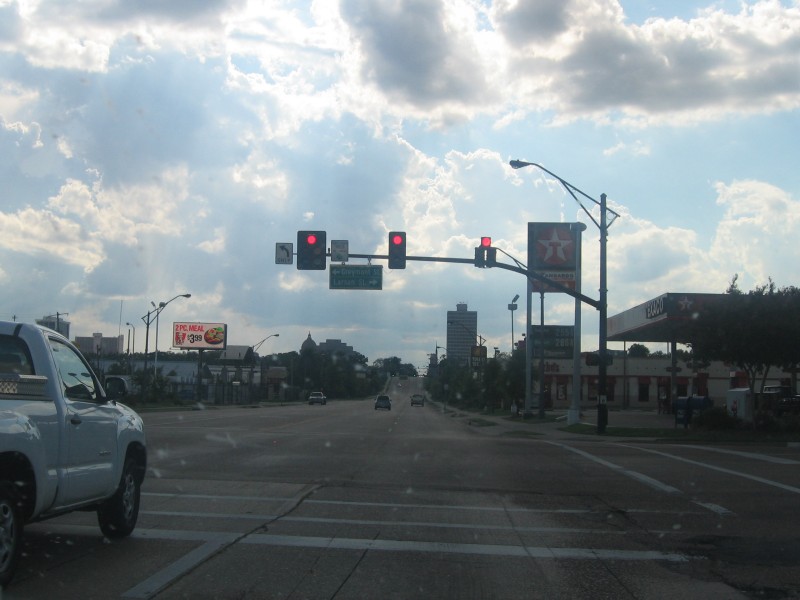 It’s enough to make the average urban planner throw a conniption fit. I’m not going to unleash any scorn on Jackson for this land use—most of it preceded the sidewalk improvements documented in this blog post. The effort aptly demonstrates that pedestrian amenities are often the window dressing to embellish—or, in many cases, to whitewash—the core problems of undesirable or imperfect land use. I hardly want the perfect to be the enemy of the good: an interstate that sits close to downtown without actually abutting it is likely to elicit motorist-oriented businesses and services at any basic exit. And the City of Jackson, with a long-shrinking tax base, no doubt saw the great potential for new hotels and restaurants along High Street many years ago. So instead, it’s best to focus on how this eccentric improvement of hairpin turns on a sidewalk can literally and figuratively pave the way for a grander but still realistic long-term vision.

Now the goal of planners should be for future development to fulfill the potential of this whimsically angled, wheelchair friendly sidewalk, by devising means of “recruiting” a built environment that provides a more attractive entrance to the city. The ramp codes that spawned this are just the start.  Returning to the above map, the space just south of High Street and further south of Mississippi Street hosts the Mississippi State Fair each year, but it still offers a reasonable amount of vacant land, which it is clear to me from “Future Site Of…” signs has registered among civic leaders as a critical place for museums, visitors centers, or other structures that highlight the city and state. Like any massive city shaping process, this will happen over time and incrementally, and it doesn’t require Jackson to aspire toward San Francisco’s level of density to achieve efficacious results. But, at present, this hairpin sidewalk most likely doesn’t even fall into the radar of most Jacksonians, since everything to the east of it is so nondescript. Careful landscape design enhancements could make it attractive or even fun for pedestrians—particularly kids, who love this sort of thing. It may seem like a stretch, but the iconography behind this zigzag, with enough careful branding, could form part of the imagery that comprises the “Gateway to Jackson” itself. My biggest hope, though, is that someday, this pedestrian improvement that idealistically addresses ramp codes, which engineers apparently installed because the land was available, will actually find users beyond the occasional detail-obsessed blogger.

PrevVestigial Judaism, Part III: Urbanization along the Cotton Belt.
When light poles and steeples compete with the high rises.Next